AleaSoft, September 4, 2019. In August, the lowest prices of the main European markets so far this year were obtained, despite the decrease in renewable energy production compared to July.

The prices of Brent oil futures for the month of November in the ICE market remained between $55.93/bbl and $61.32/bbl during the month of August, settling on August 7 at $55.93/bbl, the lowest price obtained so far this year. Throughout the month of August this market was conditioned by various factors that caused it to fluctuate both downward and upward: the production cuts established by OPEC+, the decrease in US crude oil inventories and the global economy slowdown due to the trade war between the United States and China.

The TTF gas futures in the ICE market for the month of October were settled between €14.33/MWh and €12.80/MWh during the month of August and continue at two‑year historical lows. During the first 13 days of the month they kept oscillating around €14/MWh, but as of August 14, the price began to fall, settling on August 27 at €11.95/MWh, the lowest price traded in the last two years, which was recently surpassed by the settling price of €11.85/MWh on Monday, September 2.

The API 2 coal futures prices in the ICE market for the month of October began on Tuesday, August 1 with a settling price of $60.75/t, to be subsequently traded down for most of the month of August and reaching $53.70/t on Wednesday, August 28, the minimum price quoted for this product so far this year. The monthly average of the settling price for this product in August was ‑6.0% compared to that obtained in July.

The CO2 emission rights futures prices in the EEX market for the December 2019 reference contract were traded throughout the month of August between €25.08/t and €29.45/t, settling on Friday 23 at €25.08/t, the lowest settling price in the month. This product is experiencing downward pressure since August began, having reached record highs in July due to the prospects of a hard Brexit and the growing trade dispute between the United States and China. 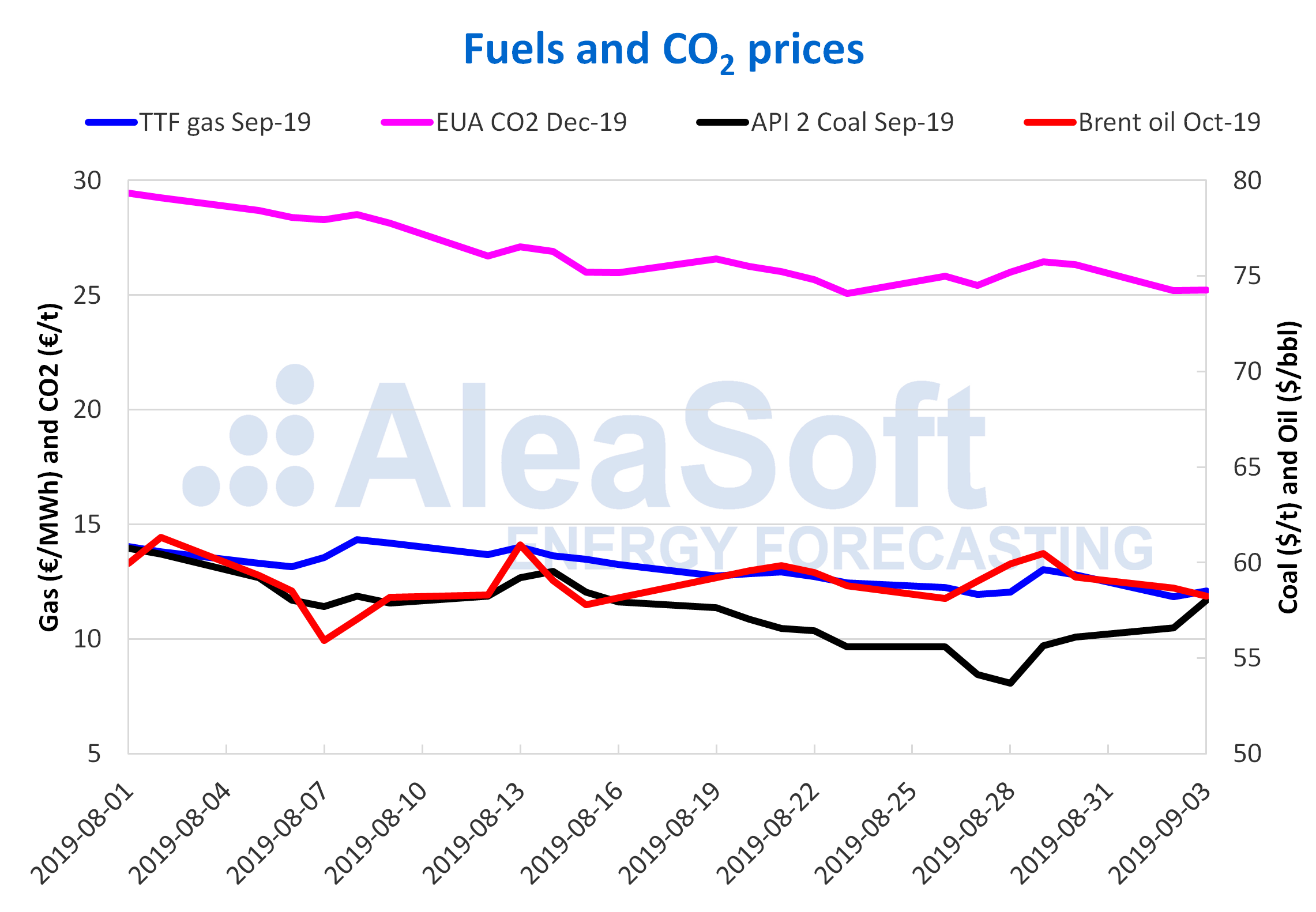 In the main European electricity markets, prices fell during the month of August compared to the prices obtained in July, due to the decrease in the demand for electricity caused by the holiday period. The price reductions were between ‑13% of the MIBEL market in Spain and Portugal and ‑5.2% of the IPEX market in Italy. The exception was the Nord Pool market of the Nordic countries that registered an increase of 2.7% in the month of August compared to the month of July. This increase in the Nordic market caused it to cease being the market with the lowest price in Europe during the month of August, with a monthly average of €36.11/MWh, positioning above the EPEX SPOT market in France, with €33.39/MWh.

The fall in price in the European electricity markets during the month of August followed the same trend as the price of CO2 emission rights, which decreased by ‑3.6% compared to the average price of July.

If the prices of the electricity markets of this month of August are compared with the prices of the month of August 2018, a completely different situation is observed in their trends, making the price falls in all markets much more noticeable. The price decreases were between ‑27% of the IPEX market in Italy and ‑44% of the EPEX SPOT market in Belgium, these decreases being justified by the change in trend of the gas and coal price scenarios, which were on the rise last year towards the maximums recorded in September 2018, while in 2019 the trend has been downward with several historical lows registered in recent months.

Coinciding with the fall in fuel prices, the wind energy production this August was clearly higher than in August of the previous year for France, Portugal and Italy, while for Germany and Spain it fall below the production in August 2018.

The prices of European electricity futures traded on August 30 fell unanimously compared to the first day of the same month, both for the fourth quarter of 2019 and for the year 2020. For the next quarter, the outstanding decreases occurred in the markets of the United Kingdom and the Nordic countries. In the case of the United Kingdom, the decreases were ‑11% and ‑9.8% in ICE and NASDAQ respectively, while in the case of the Nordic countries there were decreases of ‑­9.6% in ICE and ‑9.7 % in EEX.

For next year’s session, most notable was also the decline in the UK markets, where ‑8.1% was reached in ICE and ‑8.4% in EEX.

In August, the wind energy production increased year‑on‑year in France, in a streak that began five months ago, with a growth of 17% compared to August 2018. Similarly, in Portugal there was a year‑on‑year increase in August of 8.9%, maintaining this trend for the fifth consecutive month.

In the case of Italy, the wind energy production had a year‑on‑year growth of 11% in the month just concluded. On the other hand, in Germany and Spain the decreases were ‑4.0% and ‑12% respectively. These events led to a ‑2.0% year‑on‑year decline in Europe last month. 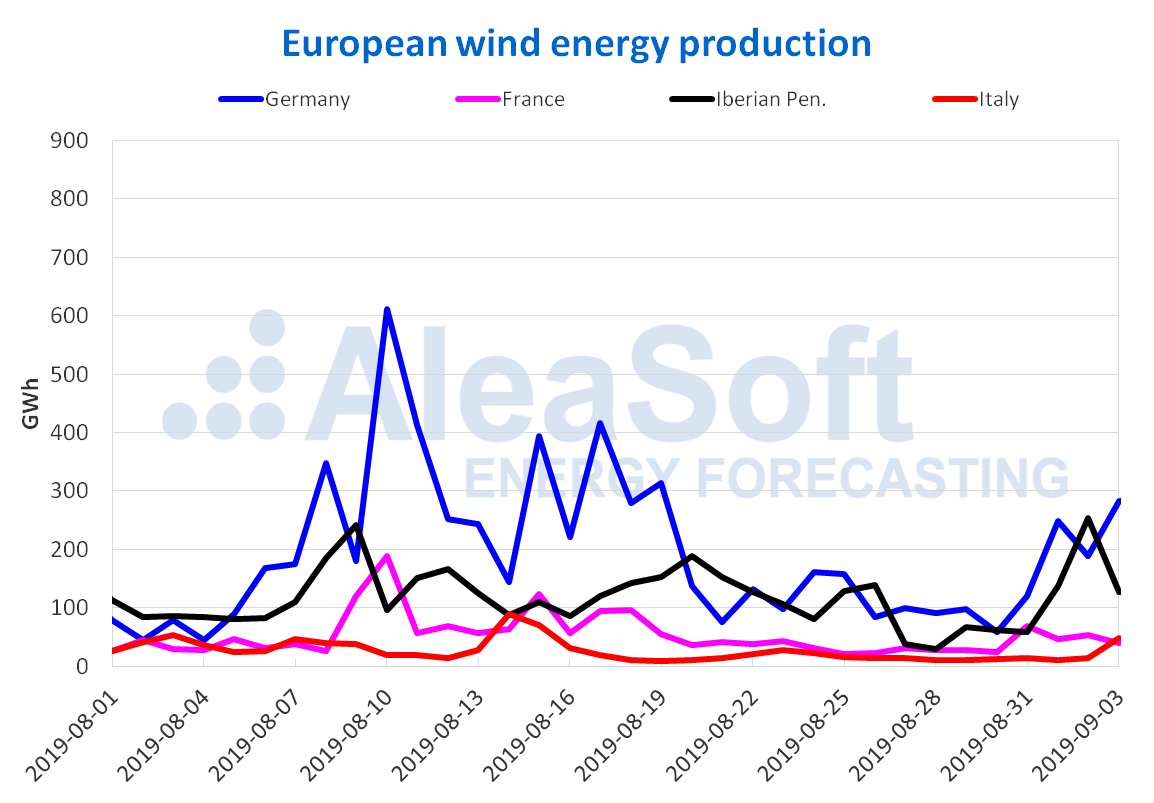 The solar energy production, which includes photovoltaic and solar thermal technologies, enjoyed last month a recovery in the main European producers, obtaining a year‑on‑year growth of 6.0%. Individually, the increases were 1.8%, 9.2% and 15%, in Germany, Italy and Spain respectively. 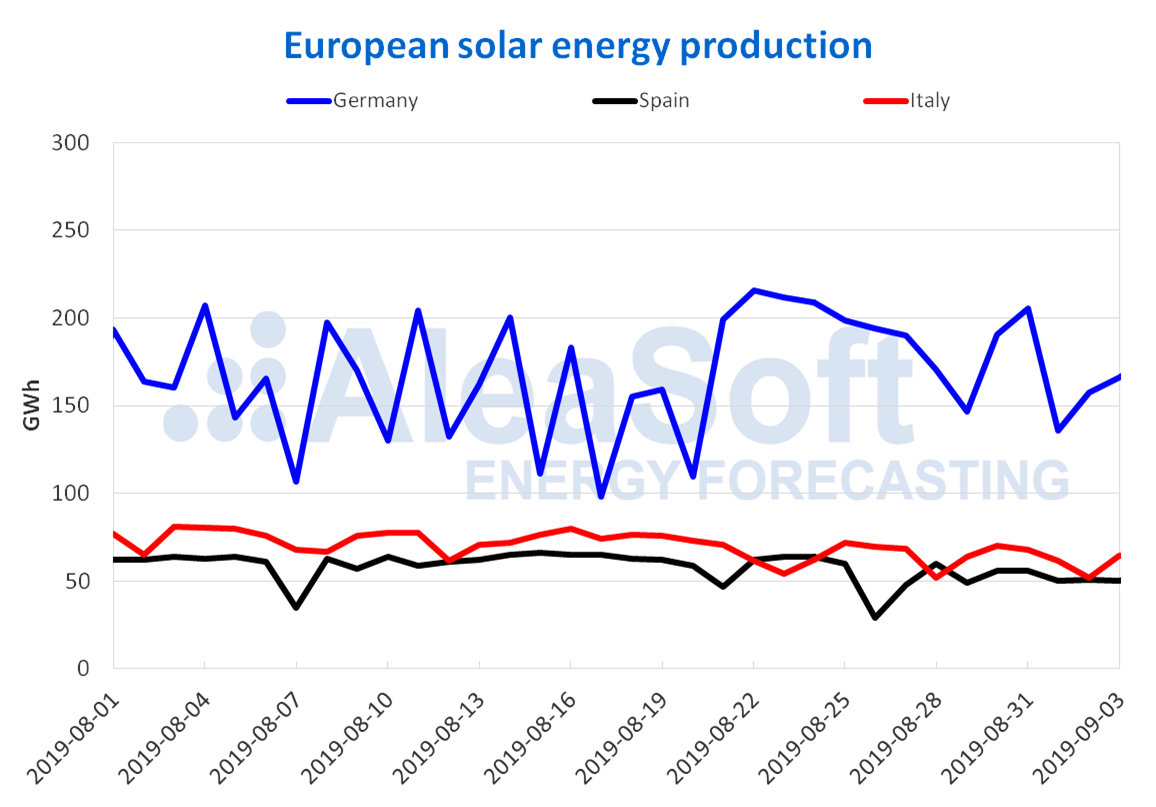