AleaSoft, August 1, 2019. AleaSoft analyses the behaviour of the Iberian electricity market MIBEL during the month of July, as well as the rest of the continent’s markets. Although the price of the electricity market MIBEL increased in July compared to the month of June, compared to the same month of the previous year the price drop was very significant. According to AleaSoft, the keys are in the increase of renewable energy production and the decrease in gas and coal prices.

The electricity market MIBEL ended July with an average price of 51.46 €/MWh for both Spain and Portugal, values that represent a 17% year-on-year price drop. Compared with the month of June, the price increased by 9%. The market coupling between Spain and Portugal also increased in this last month: in July the percentage of hours with market coupling reached 99.2% while in June it stood at 98.8%.

According to the AleaSoft‘s analysis, the situation of the fuels prices, gas and coal, which in this July were clearly below the levels they had in July 2018, was the main cause of this year-on-year fall in the electricity market prices. But it must also be highlighted the effect the increase in wind energy production had on the price, of 28% in Spain and 21% in Portugal, compared to the same month of the previous year, and in photovoltaic energy production, which also this July set a new monthly production record of 948 GWh and also an hourly production of more than 4 GWh.

The maximum hourly price reached during the month of July was 60.10 €/MWh, registered in Spain on July 12 at the 14th hour, and it was the only time when the price exceeded 60 €/MWh throughout the month. At that time, the Portuguese market decoupled and remained at 58.39 €/MWh.

According to the data published by Red Eléctrica de España (REE), during July the CCGTs were the technology that produced the most in mainland Spain, followed by the nuclear energy.

In all of the main electricity markets in Europe, the prices also increased during the month of July compared to the previous month. At the top, the markets in which the price grew the most were the ones usually more sensitive to the meteorology: the EPEX SPOT market of Belgium, with a price increase of 37%, the EPEX SPOT of France, with 29%, and the Nord Pool of the Nordic countries with a 26% increase. Just behind is the EPEX SPOT market of Germany with a price increase of 22%. The rest of the markets stood at around 9% price growth, but the N2EX market of Great Britain stood out with the lowest growth of all, below 3%.

The price increase in European electricity markets during this month of July followed the same trend as the increase in the price of CO2 emission rights, which increased by 11% compared to the average price in June. But the market price basically followed the behaviour of the temperatures, hence the most weather-sensitive markets registered the most important price increases. Although at the end of June there was also a heat wave on the continent, during the heat wave of the second half of July slightly higher temperatures were recorded and the situation worsened with the unavailability of nuclear power plants in France, due to the environmental restrictions to its refrigeration. On average, between June and July, the temperature increase was of 2 °C.

Comparing this month of July with the month of July 2018, the price drop was significant in all markets. The drop was between 17% and 32% and reflects the change in the situation of gas and coal prices, which in July 2018 were in an upward race towards the maximums recorded in September, while in 2019 the trend is clearly downward with several historical lows exceeded. 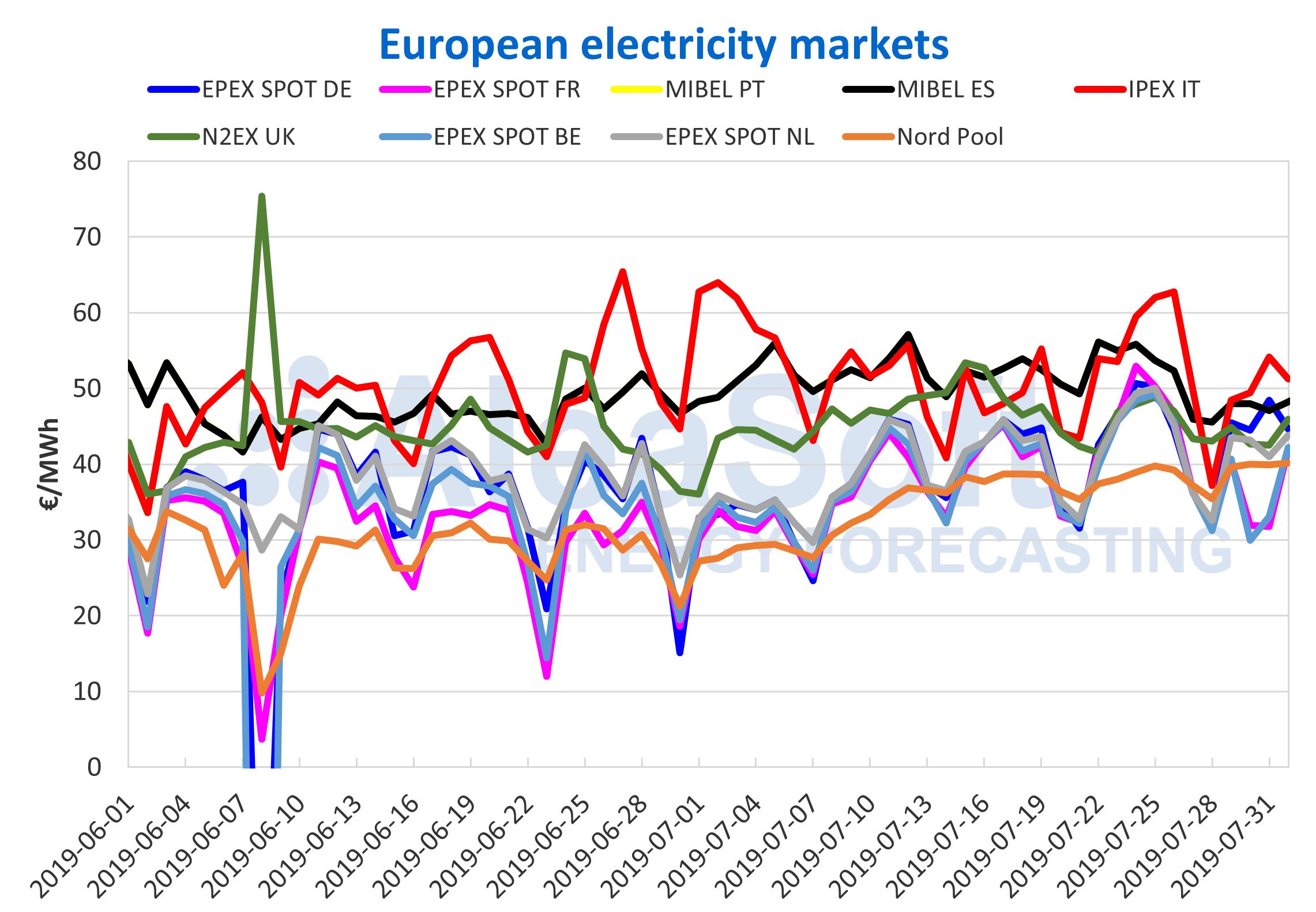 Regarding the average price level during this month of July, the EPEX SPOT markets were around 39 €/MWh, while the Nord Pool market registered again the lowest price with 35.15 €/MWh. The British N2EX market continued halfway with an average price of 45.68 €/MWh and the others, traditionally more expensive markets, of Spain, Portugal and Italy were around 52 €/MWh.

The Brent oil futures prices for the month of October in the ICE market continued to oscillate throughout the month of July between 61.59 $/bbl and 66.69 $/bbl. This market was conditioned by multiple factors that impact both upwards and downwards. The interruptions caused by Hurricane Barry, the production reduction established by OPEC+ and a new escalation in tensions between the West and Iran after a failed attack on a British tanker affected on the offer side. While on the demand side, it continues suffering from the risk of a weakening in the global economy due to the trade war between the United States and China.

The TTF gas futures in the ICE market for the month of September registered a strong upward trend during the first days of July, settling on Friday, July 12, at 13.87 €/MWh, its highest settlement price since May. After this increase, it resumed the downward trend and fell to 10.48 €/MWh at the end of the month, their lowest value since the product is being traded.

The API 2 coal futures prices in the ICE market for the month of September were on the rise during most of the month of July reaching 63.60 $/t on Tuesday 23. This sudden escalation occurred after a prolonged downward trend and was completed with a rise of more than 9 $/t in less than 30 days. After this increase, prices fell back below 59 $/t on the last two days of July, although they remained above the settlement values of the beginning of the month.

The CO2 emission rights futures prices in the EEX market for the December 2019 reference contract were traded above 26 €/t throughout the month of July and settled on Tuesday 23 at a historical high record of 29.30 €/t. 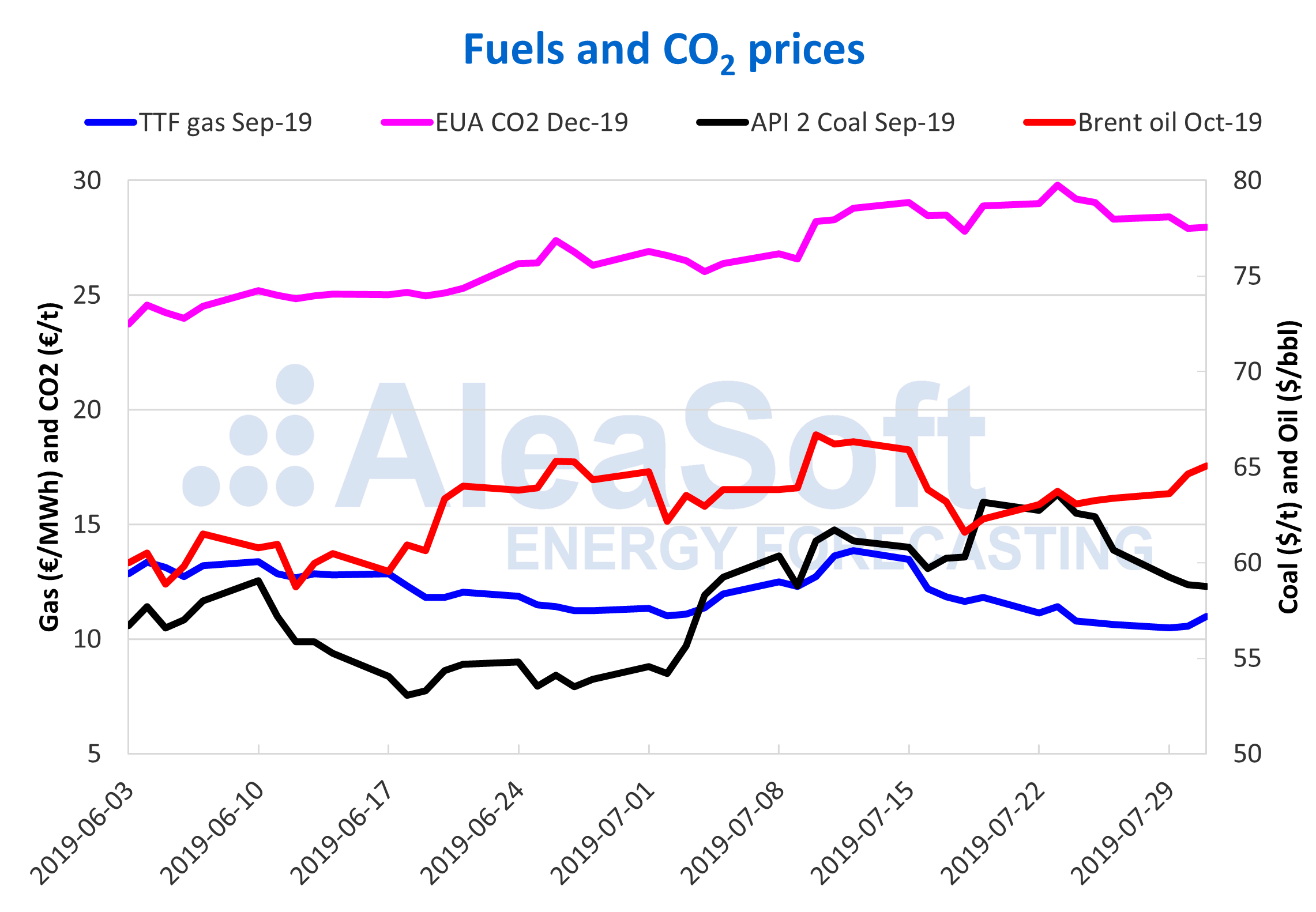 The behaviour of the electricity futures for the last quarter of the year of Spain and Portugal, both in the OMIP and EEX markets for Spain, as well as in the OMIP market for Portugal, left a net variation during the month of July of almost no relevance. In both countries, the price at the end of the month for this product shows a slight decrease of less than 1 €/MWh compared with the price at the beginning of the month. However, this difference does not make justice to the futures behaviour in this period. Although they began and ended the month with practically the same price, during the first fortnight they had an increasing trend, leaving maximums above 60 €/MWh, a price that was not exceeded during the whole month of June. Then, in the second fortnight the price decreased until it reached a value slightly below the price of the first day of the month.

On the other hand, the behaviour of the electricity futures price for the year 2020 in these same countries was more noticeable. After maintaining an upward trend that made a truce at the end of the month, this product for Spain reached 57.45 €/MWh in the OMIP market and 57.38 €/MWh in the EEX market. In the case of Portugal, in the OMIP market, the future of 2020 reached 57.80 €/MWh. All these maximum figures were reached on July 23 and in all three cases they represent the maximum price reached for each of these products during 2019.

Regarding the futures of France and Germany in the EEX market, for the product of the fourth quarter of 2019 it occurred almost the same as for Spain and Portugal: they closed the month with net variations of less than one euro in the price of a MWh, but with maximums in the central days of this period that exceed the border, respected throughout the month of June, of 60 €/MWh for the case of France and 50 €/MWh for Germany. Although it is worth noting that the difference in the case of Germany was positive, but in any case of only 1.9% compared to the price at the beginning of the month. 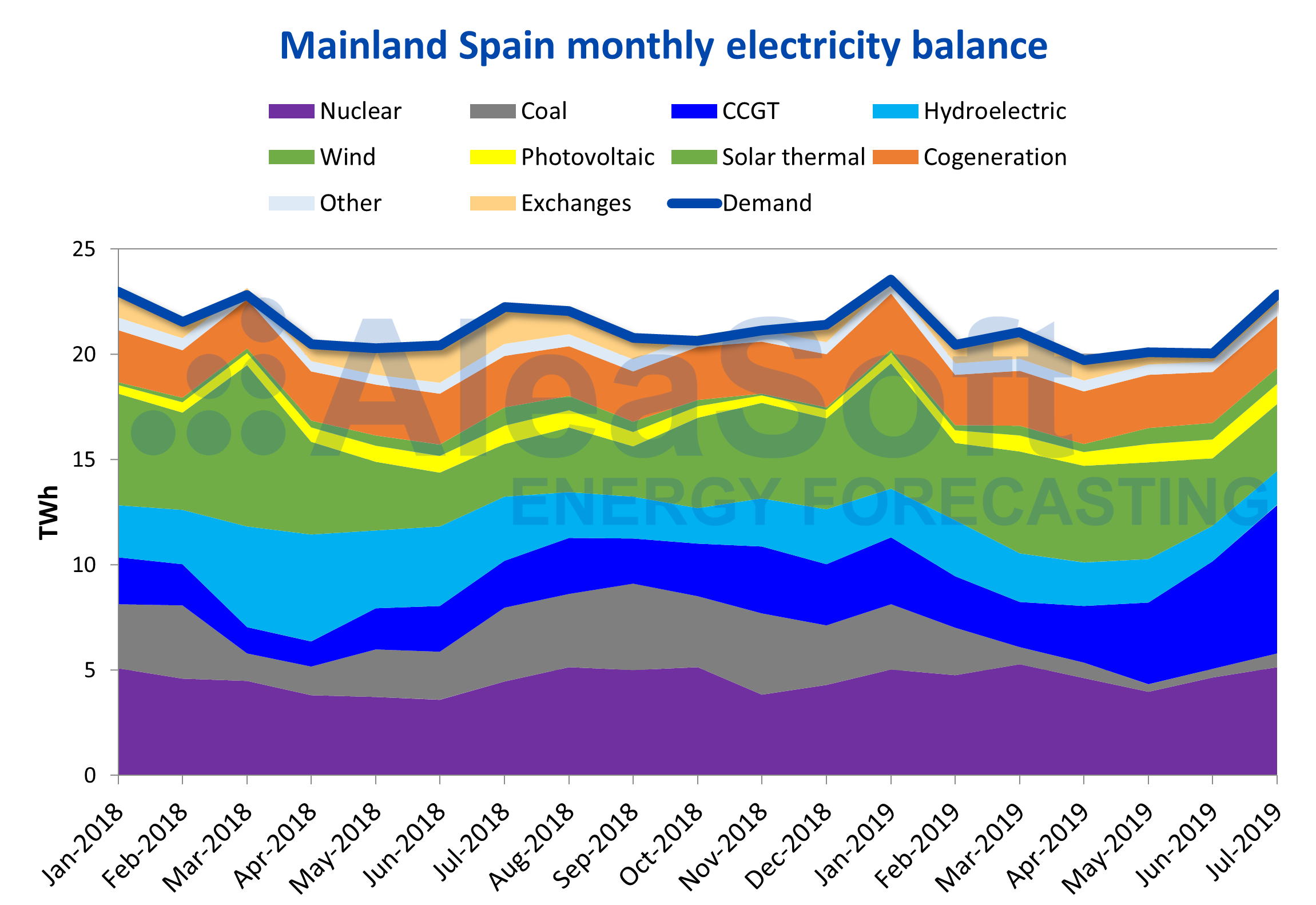 The electricity demand, which was 22 775 GWh in the recently completed month of July, increased 2.7% compared to July last year. Until now, it is the second month of the year with the highest demand after January, also it is above the electricity demand registered during each month of 2018. This rise is partly due to the year-on-year increase of 0.6 °C of temperatures in the month of July. According to REE data, when correcting the effects of temperature and working patterns, a year-on-year decrease of 3.3% was observed.

The CCGT production continues to dominate the electricity mix in Spain, with 7048 GWh last month and an increase of more than triple, exactly 216%, compared to the same month of 2018. The production with this technology contributed 32% in July, beating the nuclear energy production for the second consecutive month, something difficult to expect a year ago when in July 2018 it only represented 11% of total monthly production.

The nuclear energy production also increased by 15% in the month just concluded, in year-on-year terms. The registered value was 5131 GWh, which represents 23% of the total generation mix. Throughout the month of July, and to this day, all nuclear power plants are in operation.

July wind energy production remained one step ahead of the same period of the previous year for the fourth consecutive month. In this ascending streak, the growth was 28% this time in mainland Spain.

The hydroelectric reserves at the end of the month were, since May, below the levels of the same months last year, decreasing by 24% last month compared to July 2018, according to data from the Hydrological Bulletin published by the Ministry for Ecological Transition. The reserves currently have 10 442 GWh, which represents 45% of the total capacity.

PrevAnterior50 years from the arrival on the Moon and the photovoltaic revolution
SiguienteInterview of PV Magazine to Antonio Delgado Rigal, CEO of AleaSoftNext
Menu
Facebook-f Twitter Linkedin Instagram