AleaSoft, December 12, 2019. The solar energy production declined this week in most European markets. Meanwhile, the wind energy production rose in almost all markets. The temperatures increased, which led to a decrease in demand. All these factors allowed the prices to fall in a generalised way. At the end of the week, the weekly average price will continue to be lower than that of last week, because the same conditions will continue over the weekend.

So far this month the solar energy production had a heterogeneous behaviour in the different European markets, compared to the first eleven days of December 2018. In the case of the German and French markets there was an increase in production, highlighting the 74% increase in Germany. On the contrary, in the Iberian Peninsula and Italy, a reduction in production of between 7.0% and 11% was observed respectively. 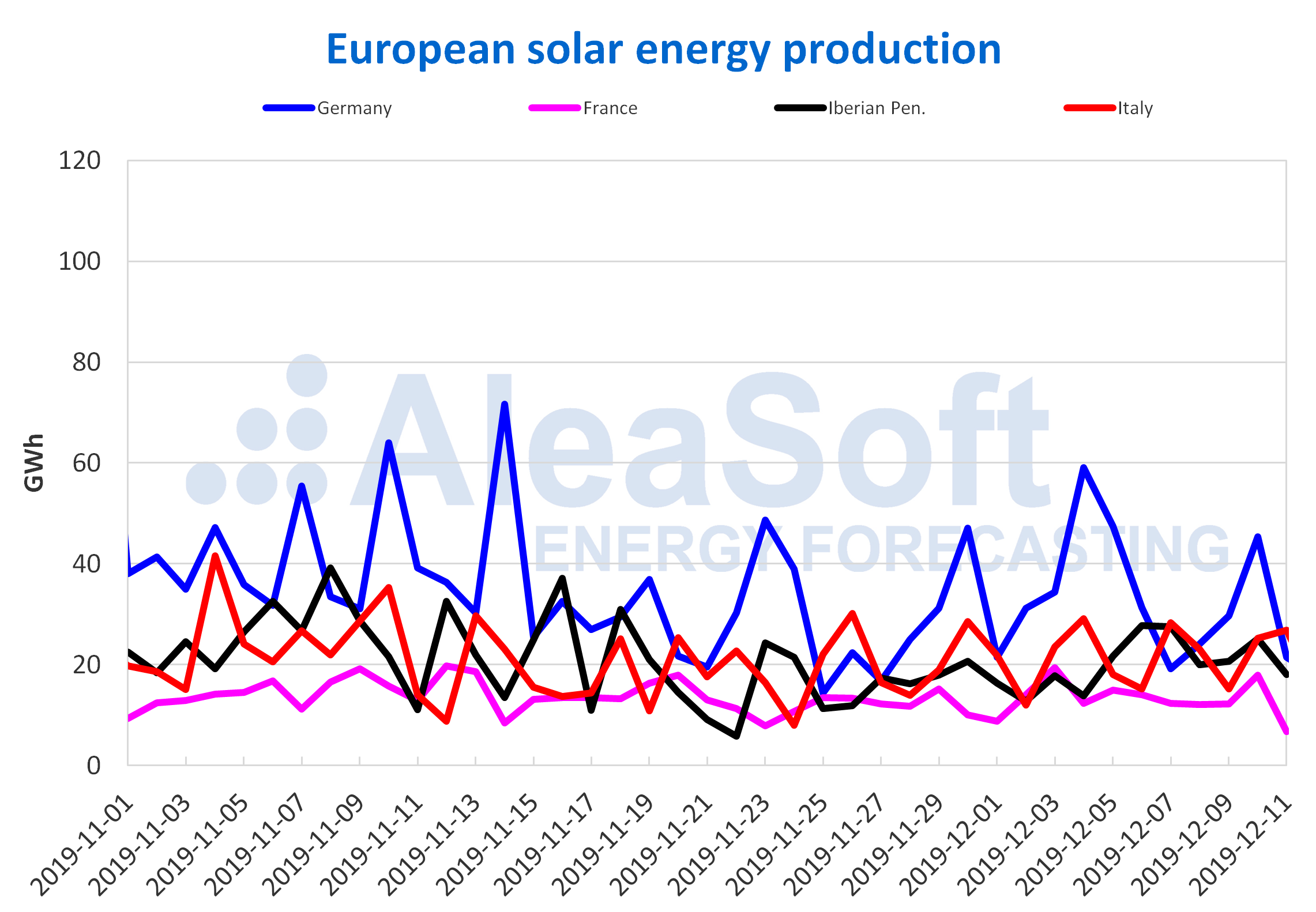 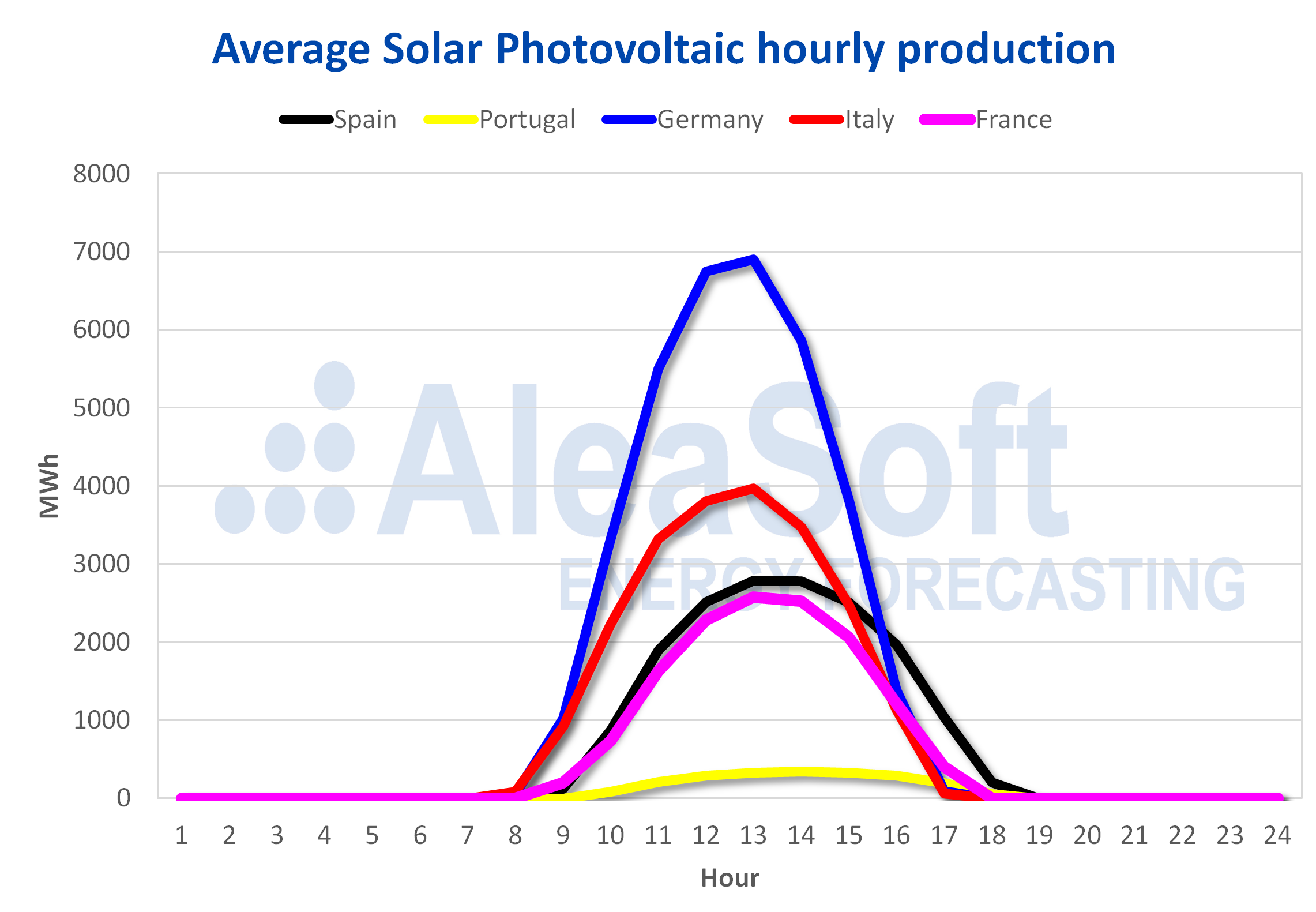 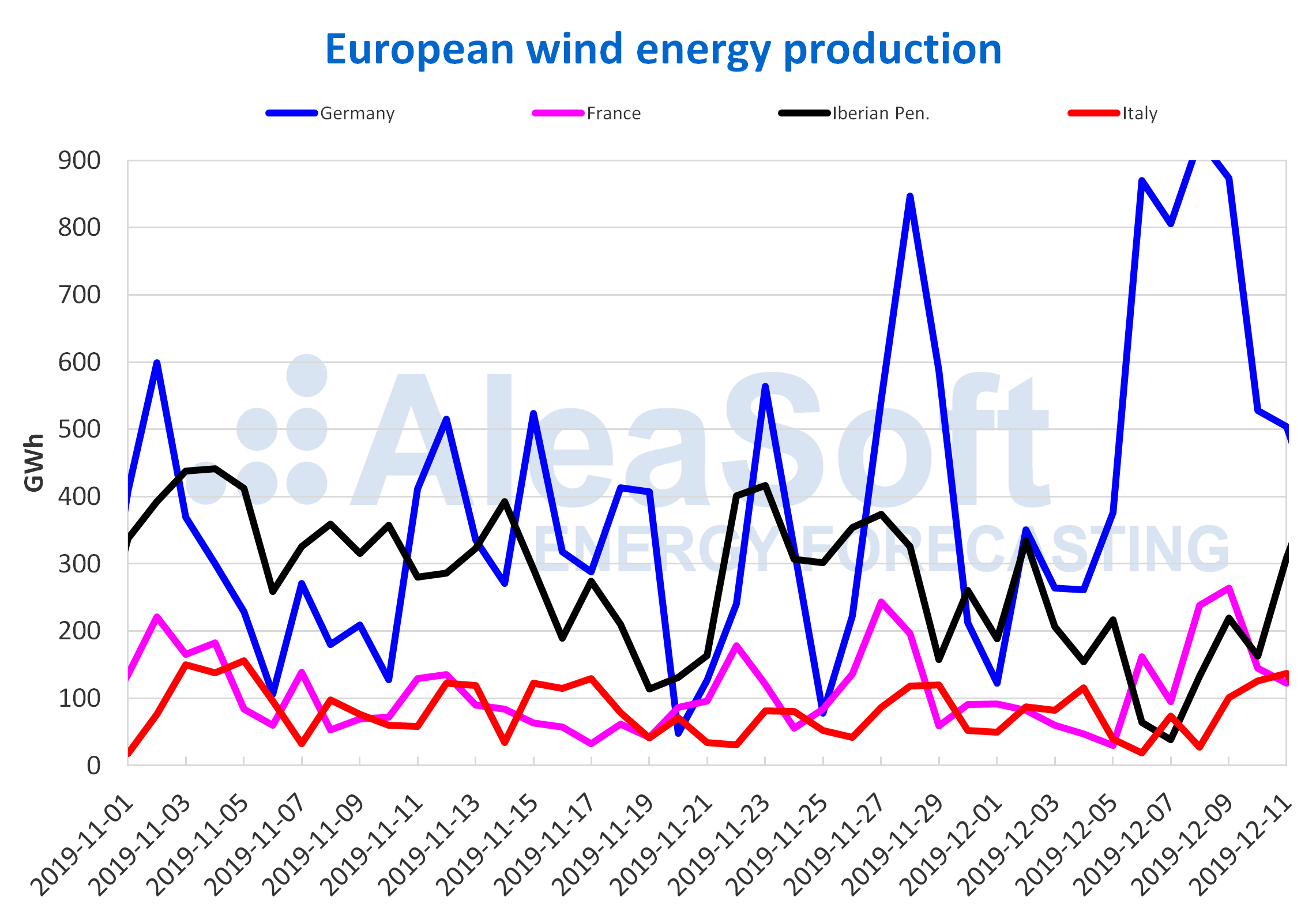 So far this week, the electricity demand was reduced in most European markets, compared to the first days of the previous week, due to a fairly general increase in average temperatures. In the case of Italy the behaviour was the contrary, registering an increase in demand of 2.9% since there was a decrease of almost 2 °C of the average temperature in these first days of the week compared to the same period of the previous week. Despite the strong correlation between demand and temperatures, the German market started this week with a demand higher than that of the beginning of last week, although in this period the average temperatures increased around 2 °C. 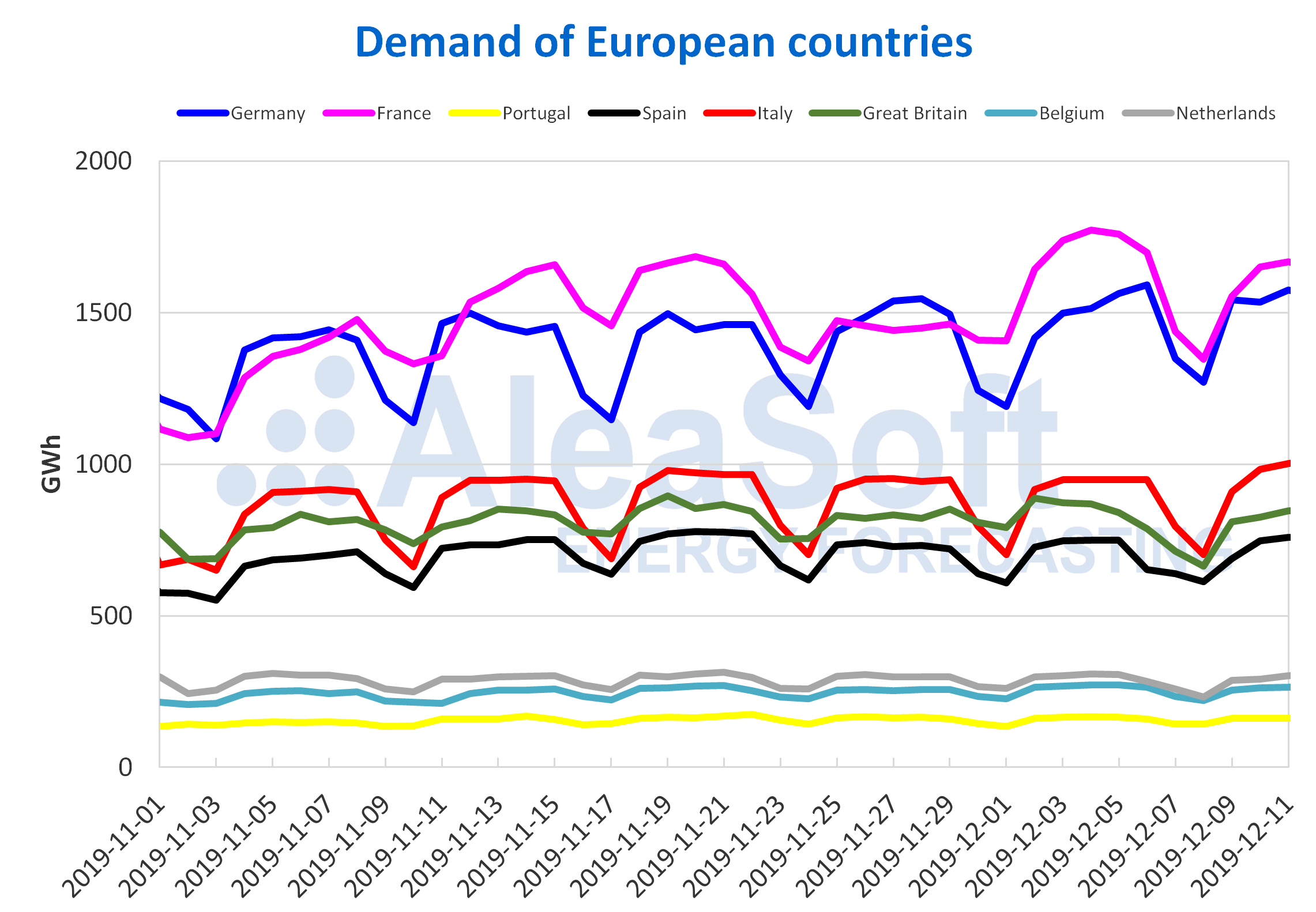 In the case of the electricity demand, at the beginning of this week there was a drop of 1.3% compared to the period between Monday and Wednesday of last week. The effect of the regional holiday of last December 9 joined to the increase in temperatures as the main causes of the decline in demand.

On December 7, the Cofrentes nuclear power plant was reconnected to the electricity grid, once the work corresponding to its 22nd refuelling, which was carried out for 35 days, was completed. In this way, the nuclear energy production in Spain increased gradually, being 20% higher in the first three days of this week compared to the same days last week. At the moment, the Vandellós power plant continues stopped also due to refuelling until December 19. 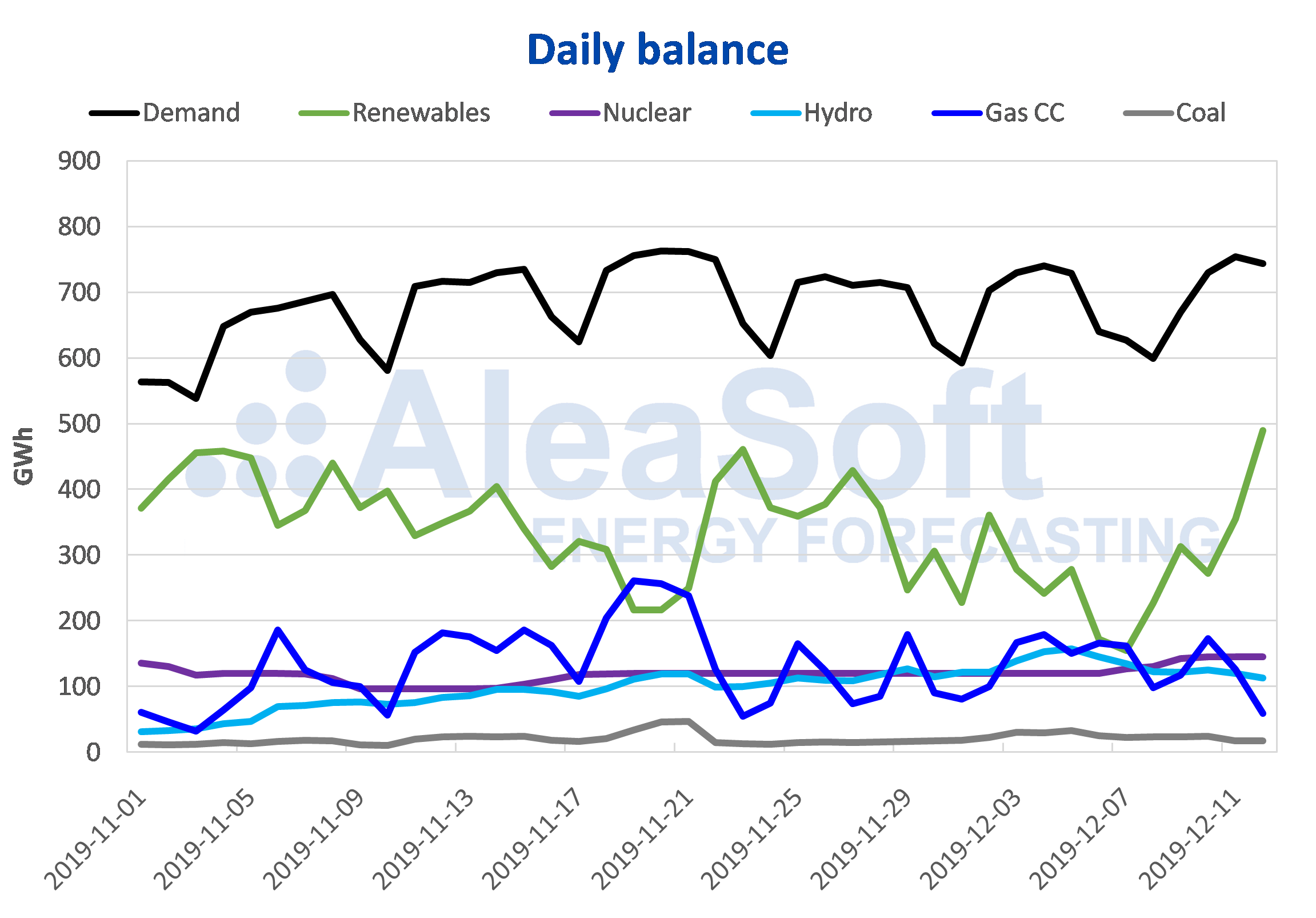 The level of the hydroelectric reserves is currently 10 220 GWh, which represents 99 GWh more than the previous week. The current reserves constitute 45% of the total capacity of 23 281 GWh, according to data from the latest Hydrological Bulletin of the Ministry for Ecological Transition.

This general drop in prices was mainly due to the high wind energy production in all European markets, and solar energy production in the case of Spain and Italy, which was registered since the beginning of this week, and to warmer temperatures that caused a decrease in electricity demand in most markets. 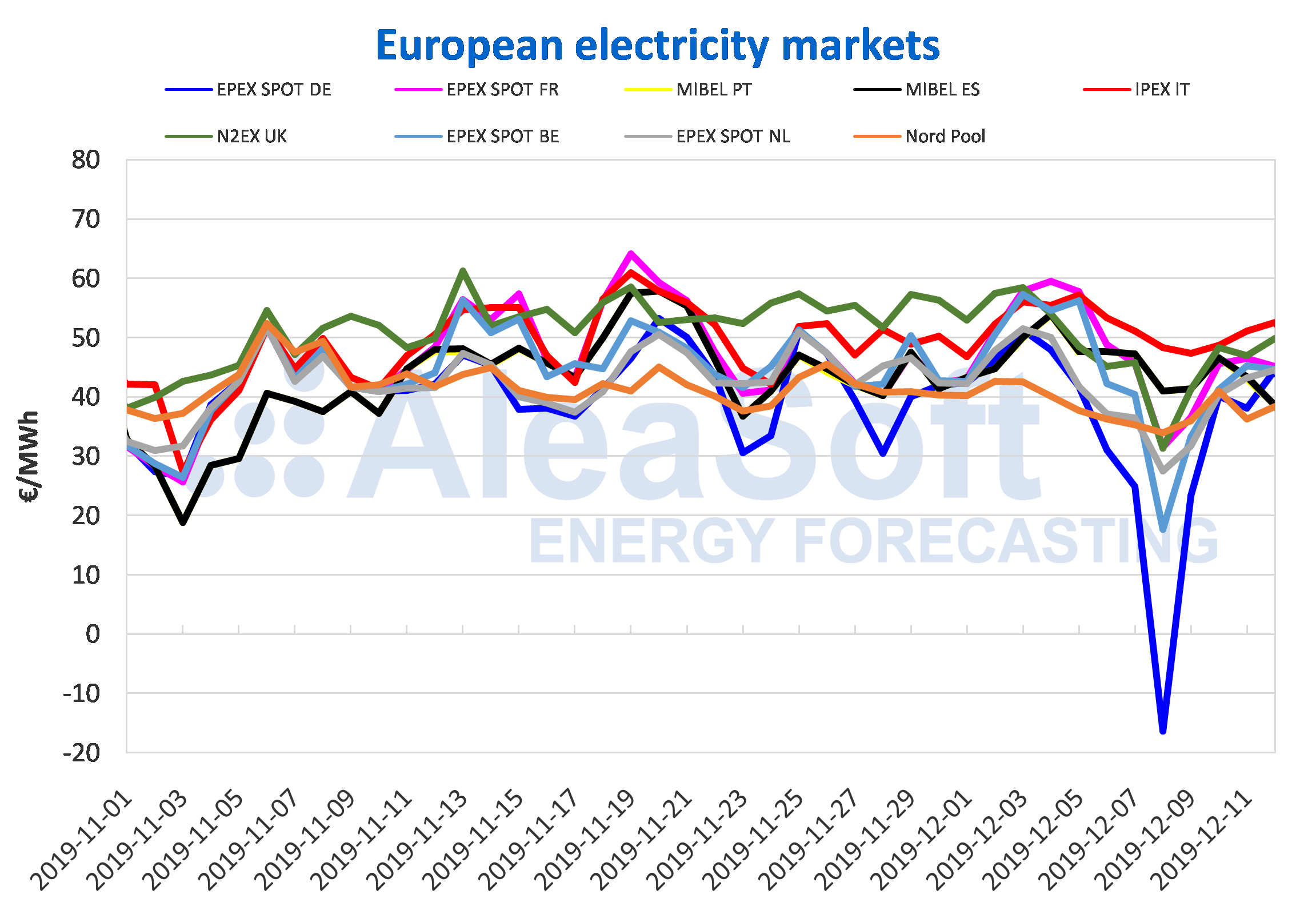 At AleaSoft it is expected that in the rest of the days of this week the prices will continue to be low in most European markets due to the high wind energy production.

The average price of the MIBEL market of Spain and Portugal was €42.48/MWh and €42.39/MWh between Monday and Thursday of this week and presented a variation of ‑14% in each case with respect to the homogeneous days of last week, mainly due to the increase in temperatures and a greater solar and wind energy production in Spain that lowered the prices of both markets. During this week, the highest registered average price was that of Tuesday, December 10, of €46.60/MWh for both countries, with an increase of €5.24/MWh compared to the previous day, caused by the decrease in wind energy production, which increased again as of Wednesday, when the prices dropped to €43.03/MWh and €43.40/MWh for Portugal and Spain respectively. This Thursday, December 12, they continued to fall to €38.58/MWh, a value approximately €5/MWh lower than those of the previous day.

At AleaSoft, the prices are expected to continue to decline during the rest of the week, backed by warmer temperatures and an increase in wind energy production.

The European electricity futures prices for the first quarter of 2020 continued their fall in most markets. The ICE market of the Nordic countries and the NASDAQ market also of the same region are the only ones that did not register declines from last Friday, December 6, to the market session of Wednesday, December 11. The EEX market of France settled at that session at €49.05/MWh. This price represents a decrease of 6.4% compared to Friday, December 6, which makes this market the one with the largest decrease in the analysed period.

In the case of the electricity futures for next year 2020, the price drop was general in all the markets analysed by AleaSoft. Although less noticeable in the Nordic region, where the decrease was 0.3%, in the rest of the markets the decreases are between 2.0% and 3.4%. This last figure is that of the EEX market of Great Britain, which when settling at €43.45/MWh is the market with the steepest decline for this product between the analysed days.

After the increases of Friday, December 6, the Brent oil futures prices for the month of February 2020 in the ICE market remained stable until Tuesday, December 10. These days the prices ranged between $64.25/bbl of Monday, December 9, and $64.39/bbl of Friday, December 6. But on Wednesday, December 11, the settlement price, of $63.72/bbl, dropped 1.0%. This behaviour is related to the concerns about the progress in the negotiations between China and the United States to establish a trade agreement, which seems difficult to reach before the new tariffs enter into force on December 15. The climate around this trade dispute will continue to condition this market in the coming days.

The TTF gas futures prices in the ICE market for the month of January 2020, the first days of this week continued with the downward trend of last week. Due to these continued declines, on Wednesday, December 11, the settlement price reached was €14.05/MWh, which constitutes a new historical minimum for the last two years.

The TTF gas prices in the spot market started the week with an index price of €13.71/MWh, slightly higher than that corresponding to the last weekend of €13.59/MWh. But subsequently they descended every day to reach a value of €13.39/MWh for Thursday, December 12.

The API 2 coal futures prices in the ICE market for the month of January 2020, the first days of this week also continued with the drops of the previous week. As a result, a settlement price of $54.75/t was recorded on Tuesday, December 10, the lowest of the last two years. However, on Wednesday, December 11, this trend changed and there was an increase of 0.4%, reaching a settlement price of $54.95/t.

The CO2 emission rights futures prices in the EEX market for the December 2020 reference contract, on Monday, December 9, increased to €25.30/t, which is the maximum settlement price registered so far this month. But on Tuesday and Wednesday the prices fell 0.8% and 1.8%, respectively. Thus, on Wednesday, December 11, a settlement price of €24.65/t was reached. In the next few days, the result of the elections held on Thursday 12 in the United Kingdom is expected to exert its influence on the evolution of the CO2 emission rights futures prices. 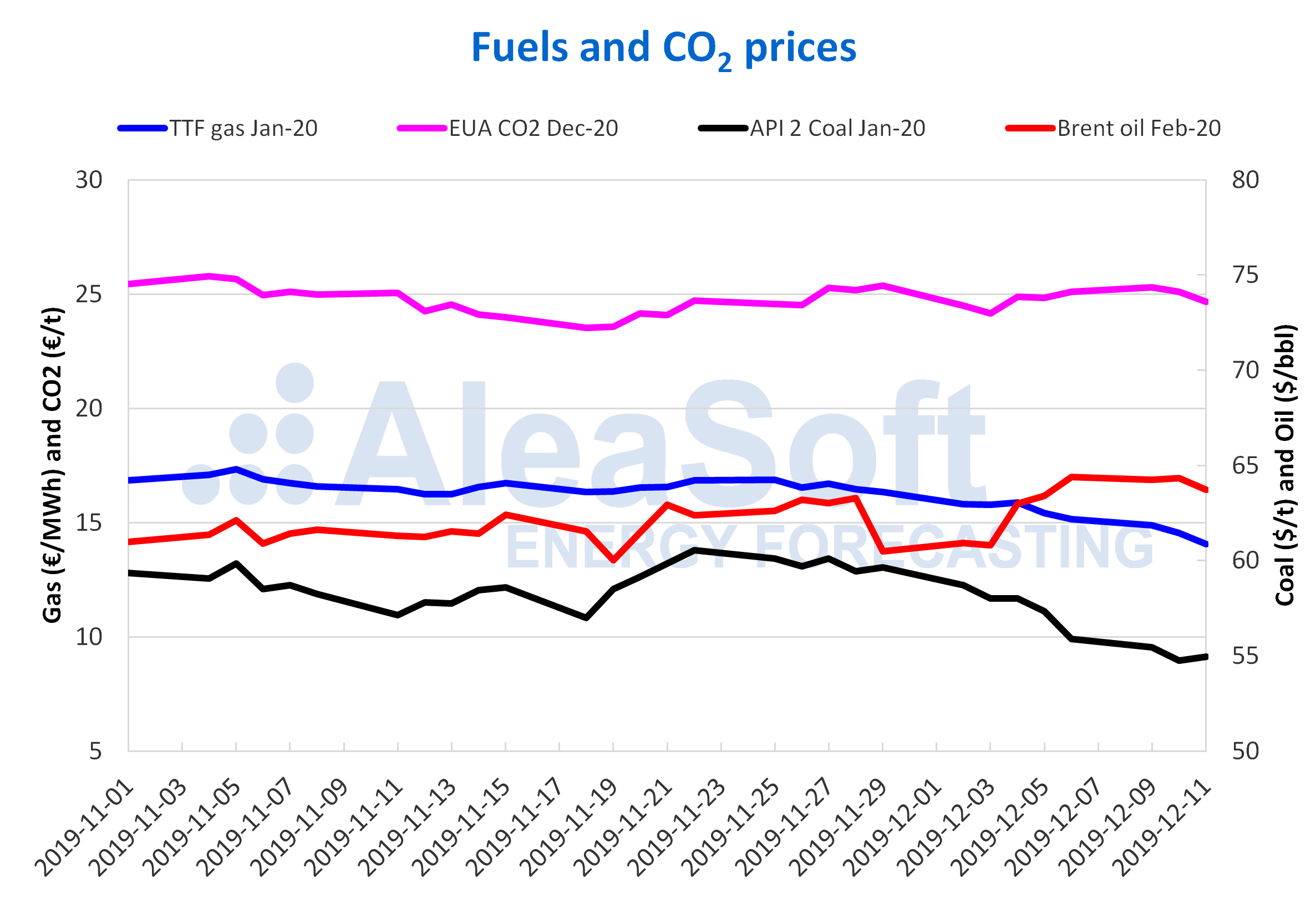