After the defence of the Third Vice President and Minister for the Ecological Transition and the Demographic Challenge, Teresa Ribera, to the measure that intervenes the wholesale market to reduce the energy cost for consumers, in Energía Estratégica España they considered it was appropriate to review the data obtained during its operation and get closer to answers about what will happen after the established term expires.

In an interview with Energía Estratégica España, the executive affirms that the Iberian exception is achieving the objective for which it was designed: reducing electricity market prices and, in this way, reducing the price paid by consumers.

What is the forecast for the market during the validity of the measure?

Currently all nuclear power plants are in operation until the end of September, when the next shutdown is scheduled, and we expect an increase in solar energy production in the summer months.

If there is no heat wave that causes the demand to rise more than expected, with average hydroelectric production and CO2 prices around €80/t, we think that the effect of the Iberian exception might be more noticeable even before September.

As of January, the reference price of gas will increase by €5/MWh each month, so the electricity market prices will increase accordingly and the additional amount to be paid by consumers will decrease.

What will happen to prices at the end of the Iberian exception?

Everything will depend on CO2 and gas prices. The Iberian exception will end on May 31, 2023, after the winter, when gas prices are expected to be less stressed, but prices will continue to be high.

In the case of CO2, unless the European Union intervenes, prices are unlikely to fall. Therefore, electricity market prices will continue to be higher than those before the COVID crisis.

It is very likely that, if it has worked well in general for consumers, especially compared to the rest of European markets, it will be extended until at least the end of the summer.

How do you analyse the effects in the first 15 days?

The beginning of its operation coincided with a heat wave that increased the demand, with low wind energy generation and with the shutdown of the Trillo nuclear plant, which made the generation with combined cycle gas turbines increase and that the electricity market prices did not drop as much as expected.

If MIBEL market prices are compared with those of the rest of European markets, prices dropped and are now at the level of the prices of the Nord Pool market of the Nordic countries, which is the one that usually has the lowest prices on the continent.

When the adjustment that consumers who benefit from this mechanism have to pay is included, prices are indeed higher than those registered the days before the so‑called gas cap came into operation. 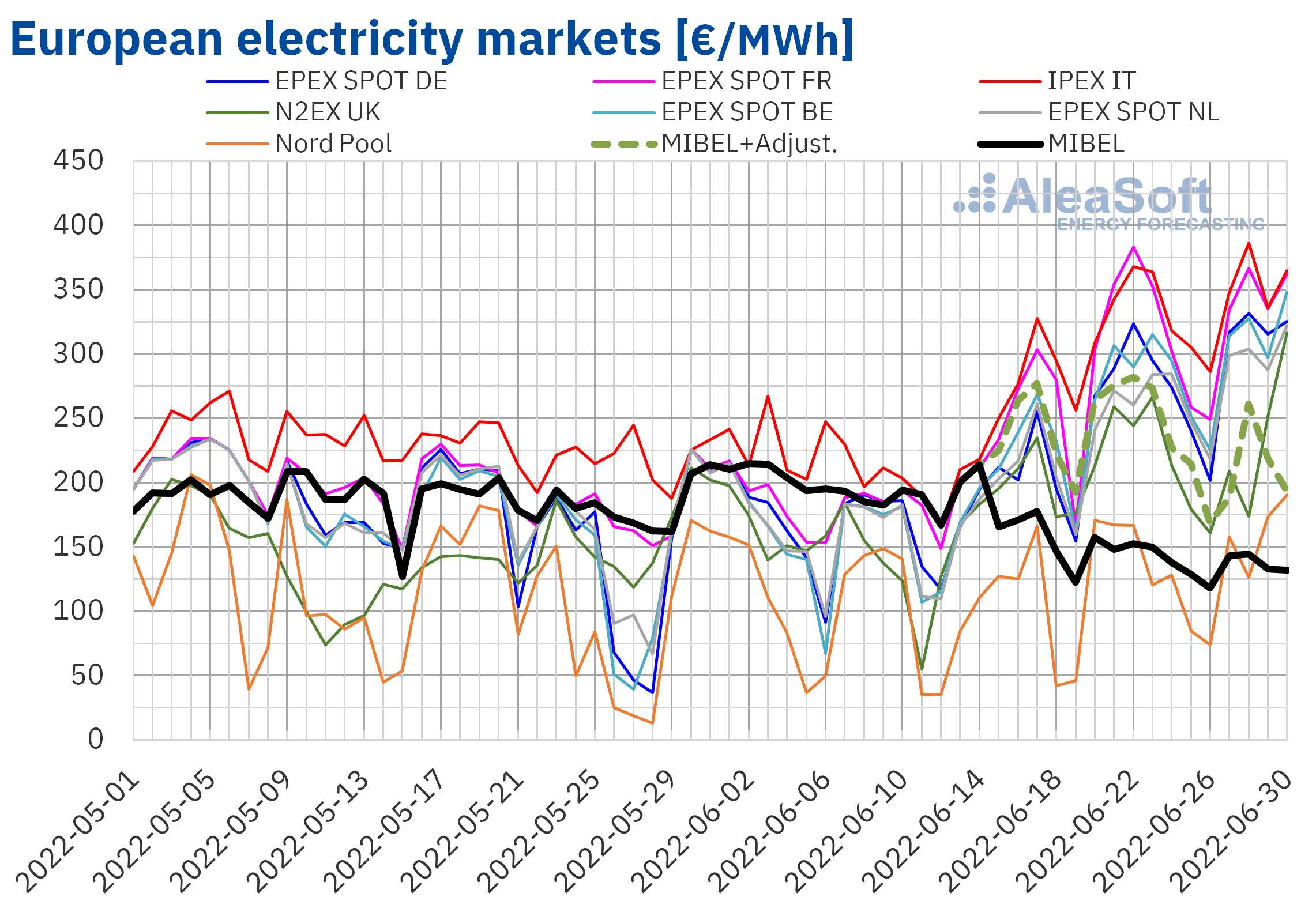 This is due to the fact that in recent days gas prices increased and dragged European electricity markets prices. But if the previous graph is analysed, MIBEL prices including the adjustment are lower than those of other markets that usually have lower or similar prices, such as those of Germany and France.

The effects of the Iberian exception were also seen in the electricity futures markets of Spain and Portugal, where prices fell since the European Union gave its approval to the measure, on April 26.

Is there concern on the part of generators about how this measure will impact?

The main concern for generators is the legal and regulatory insecurity caused by a measure like this, especially at this time when billions of Euros in investments are needed to carry out the energy transition, and for this it is essential that the regulation is stable and predictable.

All technologies will be harmed in the long‑term by this. Large investment funds prefer safe markets.

As for renewable energies, they have and will have a fundamental role in the coming years to help lower electricity markets prices, to reduce dependence on foreign energy and to reduce greenhouse gas emissions.