AleaSoft Energy Forecasting, May 6, 2022. In the midst of the complex situation that European energy markets are experiencing, it became clear that renewable energies, green hydrogen, storage and the energy transition as a whole are the solution to the problem. For the energy transition to advance, regulation needs to be stable and predictable so that it gives clear signals to investors and all the capital needed in the coming years is mobilised.

On March 17, one of the AleaSoft Energy Forecasting’s monthly webinars took place, this time with the participation of speakers from EY. The webinar analysed the situation of European energy markets after the Russian invasion of Ukraine and the prospects for the spring, the regulation of the Spanish energy sector, the renewable energy projects financing and the portfolio valuation.

The energy transition is not the problem but the solution

In the webinar, the speakers from EY highlighted that the energy transition, far from being the cause of the high prices crisis in European energy markets, will be the solution to the problem. The development of renewable energies and renewable gases such as green hydrogen, as well as energy storage, is important to reduce polluting emissions, but also, and no less important, to reduce the high energy dependence that the European Union has, which in the case of gas rises to 90%, of which about 40% comes from Russia.

Carrying out the energy transition will require a significant investment effort, which in the case of Spain is estimated at more than 240 billion Euros by 2030, in renewable energies, energy efficiency, electrification and grids.

Regulation is essential to give clear signals to investors

To attract all the investment needed for the energy transition, it is very important that regulation is stable and predictable. In the webinar, a review of the current situation and the prospects for the Spanish regulation in the electricity sector was made, including the institutional framework established by the Law on Climate Change and Energy Transition, the strategic objectives defined in the Integrated National Energy and Climate Plan (NECP), the published Roadmaps with strategies and objectives in specific fields such as hydrogen, biogas, offshore wind energy, storage and self‑consumption, the PERTE (Strategic Projects for the Economic Recovery and Transformation) such as that of renewable energies, hydrogen and storage, that of electric vehicles and that of circular economy, of which their importance to accelerate European funds and generate value for the Spanish economy was highlighted, renewable energy auctions, tenders for access and connection to the electricity grid, as well as the measures to deal with the energy price crisis. 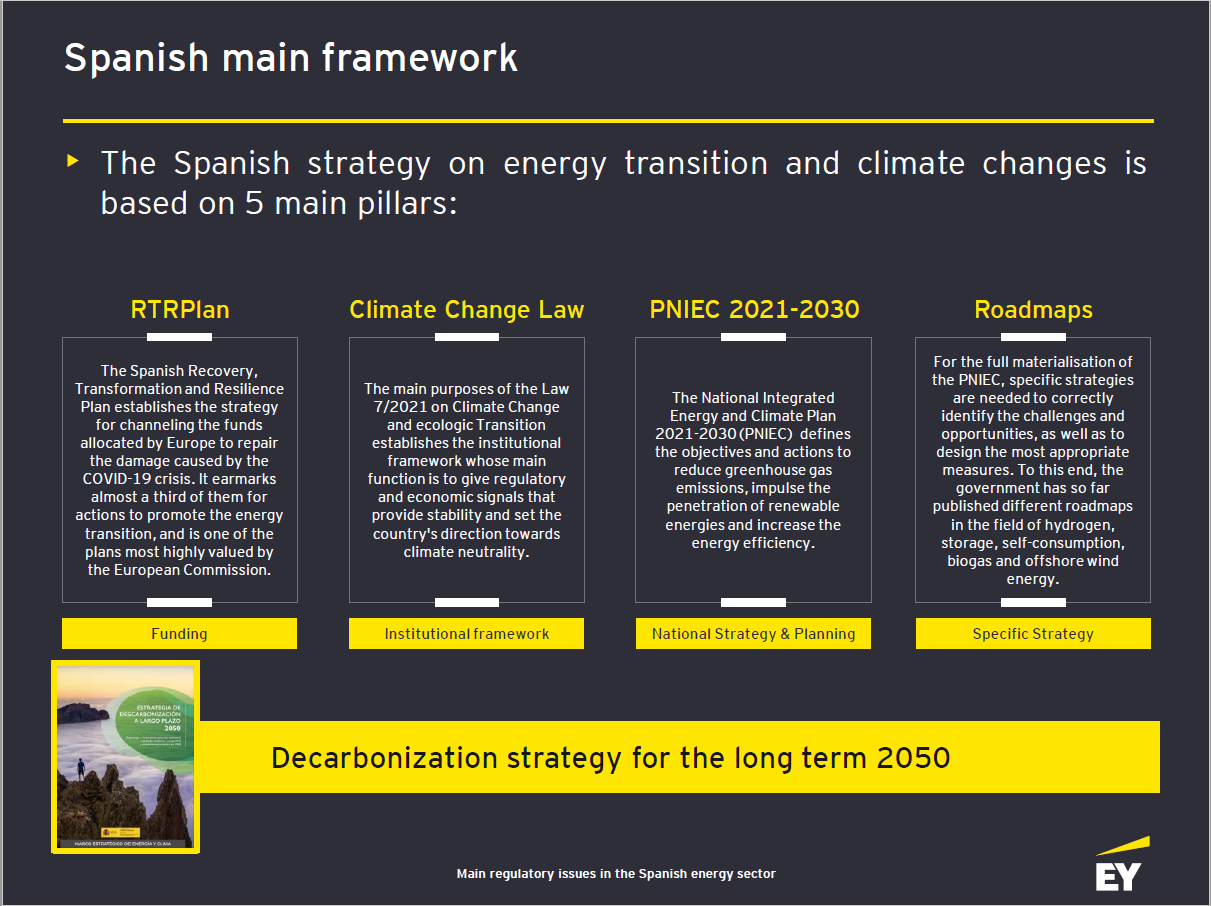 Among the issues that are pending to be carried out in the Spanish regulation are auctions of non‑emitting, manageable and inframarginal energy, which, according to EY, is an issue that must be assessed because they can generate distortions in the markets and in contracts already signed. They also commented on the need to approve in the coming months the draft ministerial order that will regulate the capacity market, which is key to promote storage, supply security, demand flexibility and to maintain the feasibility of combined cycle gas turbines. Regulatory changes are also expected to improve transparency in the energy sector. Other regulations that are pending are the National Fund for the Sustainability of the Electricity System (FNSSE), the CO2 reduction and the regulation of Roadmaps, for example, regarding Guarantees of Origin and other measures necessary to carry them out.

A measure that was pending at the end of March was the advance of calculation of the RECORE remuneration parameters, which until then had to be carried out in 2023. This measure was already included in Royal Decree‑law 6/2022 with the aim of reducing the charges on the final consumer’s electricity bill in the current energy price crisis.

In the coming days, it is expected that the gas cap will be approved in the Iberian electricity market, a measure that will be possible after the governments of Spain and Portugal received the consent of the European Union based on the exceptionality of the Iberian Peninsula as an energy island. According to what has transpired so far, the cap will start at €40/MWh and will increase so that the average of the twelve months in which the measure will be in force is €50/MWh. In this way, if CO2 emission rights prices are around €80/t, the electricity market prices would be a maximum of €120/MWh with gas at €40/MWh and €160/MWh with gas at €60/MWh. The difference between the market price and the real cost that the plants that use fossil fuels will have will be paid by the agents that make the purchase offers in the market. This measure will undoubtedly benefit consumers whose bill is indexed to the market price, especially large and electro‑intensive consumers, but also the most vulnerable consumers covered by the regulated tariff. In any case, it is important that its application is limited in time and that it is done with the maximum guarantees so as not to generate legal and regulatory insecurity, which is very detrimental to the image of the country and to the future of the sector.

According to the speakers from EY, in the complex environment in which the energy sector is, the regulation must give investors clear and predictable signals that do not distort the need to invest in order to achieve climate neutrality and 100% renewable energies in the generation mix in 2050, which Spain set as a goal in the Law on Climate Change and Energy Transition.

Clients of EY and AleaSoft Energy Forecasting, as well as those interested in its forecasts, who want to know all the details explained in the webinar, can request the recording of it.

The April edition of the AleaSoft Energy Forecasting’s monthly webinars was on the 21st and included the participation of the Ministry for the Ecological Transition and the Demographic Challenge (MITECO) and the Spanish Association for Energy Storage (ASEALEN). The webinar revolved around energy storage: its current state, prospects and aids and financing opportunities for its development. Interested people can request the recording of the webinar.

The next edition of the monthly webinars will take place on May 12 and it will be attended by experts from the energy sector who have collaborated continuously over the years with AleaSoft Energy Forecasting, to talk about the importance of energy market prices forecasting in the different stages of the renewable energies development, the evolution of the European energy markets in recent weeks, the vision of the future in the mid‑ and long‑term and the impact of the measures to limit the gas price in the Iberian market. The speakers will be Oriol Saltó i Bauzà and Alejandro Delgado, both Associate Partners at AleaGreen. The analysis table within the webinar in Spanish will include Alberto Ceña Lázaro, CEO of BEPTE, S.L., Antonio Canoyra Trabado, associate professor at the Department of Electric Power at the Comillas Pontificial University (ICAI), and Francisco Del Río, energy management expert.