Interview of Energías Renovables to Antonio Delgado Rigal, PhD. in Artificial Intelligence and CEO of AleaSoft. 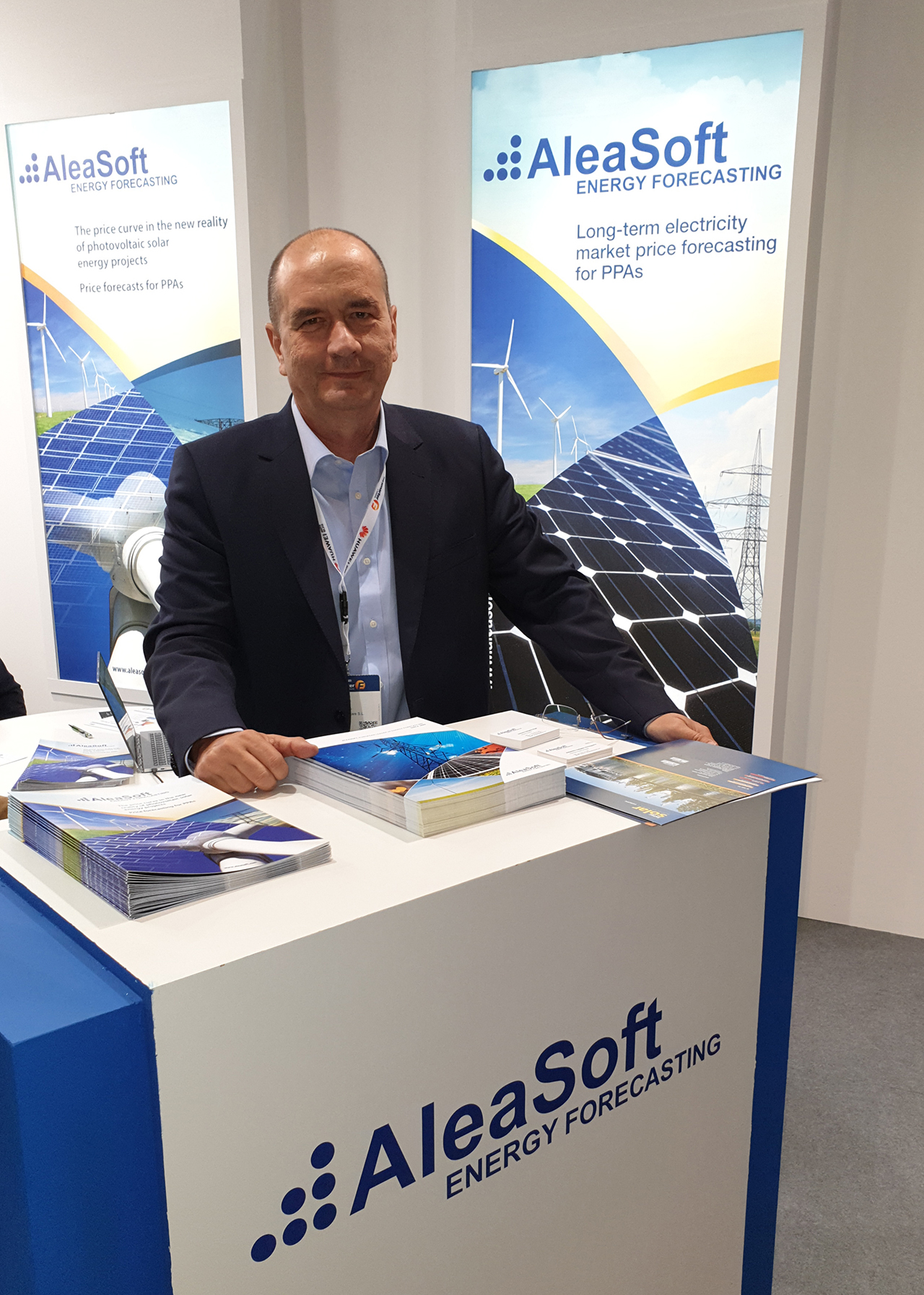 What clients does AleaSoft have and what clients should be interested in AleaSoft services and are not yet because they may not be aware of the importance of your work?

As clients, we have all kinds of companies in the electricity sector: large and medium-sized electricity generators, retailers, large consumers, system operators, banks, investment funds, developers of wind and photovoltaic farms, traders, consultancy firms, etc. More and more companies in the electricity sector realise that you cannot do a future analysis without having reliable forecasts, from months to 20 years of horizon. The vision of the future is fundamental, especially now that we are witnessing a technological change with the burst of renewable energies, mainly photovoltaic. It is a change that brings many opportunities if you have a good vision of the future.

What exactly happened on May 7?

Several factors coincided. An unscheduled outage of a combined cycle plant, a high demand that was not forecasted by the system operator or by the retailers, the forecasts of wind energy producers failed producing less as expected and at the end the system operator had to resort to some services of adjustment close to real time, that is, secondary regulation and tertiary regulation to rise. As the required demand values were unusually high, there was not enough supply and high values were matched in secondary regulation, in the allowed limit, which are offered precisely so as not to match. One positive thing about this extraordinary event is that it has served to make known how complex the electricity system and the electricity market are. The task of the electricity system operator is to ensure that exactly what is going to be consumed is produced during the 8760 hours of the year.

Would it have been avoided with the AleaSoft forecasts?

As I mentioned before, there were many factors that influenced, not just a wrong forecast. The control of the electricity system is based on an advance planning. Obviously, if the forecasts are improved, the deviations and penalties of the agents that make mistakes are reduced. The best forecasting systems are achieved by combining different models.

Why are the long-term forecasts important for a PPA?

A PPA has two points of view that must coincide, the one of who generates electricity and the one of who consumes it. It seems at first glance that a PPA is only what the developer of a wind or photovoltaic farm needs to obtain financing, since it guarantees that the money is returned to the bank or to the investment fund. But, for the large consumer or the retailer, a PPA is a fundamental tool to guarantee a part of the long-term consumption with a guaranteed price. With a PPA, both parties, generator and consumer, reduce their risks.

If both parties have the same vision of the future, a fundamental part, which is to agree on the price, can be achieved easily. If one of the two parties has a wrong price forecast can have significant losses for many years.

What does a large consumer need to lower his electricity bill?

At AleaSoft we recommend combining the different mechanisms available to acquire electricity, futures markets, bilateral contracts, PPAs and the spot market, using reliable electricity market price forecasts as a reference. We are currently providing consulting to companies that are large consumers to help them reduce their electricity bill.

If the investment director of a renewable energy company looks for a consultancy company to make forecasts, what characteristics should the methodology have?

First of all, it must be a scientific methodology. A forecasting methodology of time series must take into account the basic principles of the Box – Jenkins methodology. To make forecasts of electricity market prices it is necessary to understand that the market is in balance between supply and demand and that there is also a strategy of the agents that are competing. This strategy is changing depending on the balance that is reached. You cannot make forecasts of the price of the year 2030 with the offers curves of the year 2018.

What differentiates AleaSoft from other firms that provide similar services?

We have 20 years of experience making forecasts in the energy sector, working for the most important companies in Europe. We have a scientific forecasting methodology proven in hundreds of models that have been running continuously for many years. Our forecasts are coherent and reflect the essence of the market.

Should the current marginal market change? Does it work correctly?

At the moment, the current marginal market works. It has been working for more than 20 years. It is coupled to the European market, with similar rules. If changes are made, they should be made little by little, with transparency, without changing the basic rules, without affecting the agents that have invested, without interventionism and always being aligned with the rules of the European market where all agents must be in competition in equality of conditions.

What is your opinion of the renewable energy auctions?

The auctions are made to incentivise a technology that is not profitable by itself going to the market to compete. As it has been stated from UNEF multiple times: “The production of electricity with photovoltaic technology is profitable without premiums”.

If you talk about auctions that do not know exactly how they will be, many potential investors may regret investing because if some producers have premiums and others not because they invested before, a comparative grievance is created. The most comfortable and logical position for a potential investor is: let’s wait for the auctions to come to invest, we will not take the risk.

The auction issue is very complicated and delicate. In no case can it affect the market. It is a topic that is mentioned with good intentions and can have a counterproductive effect, ending up discouraging investments.

Is there a floor in future prices with the entrance of renewable energies?

There are several floors. From being net importers of energy, we can become exporters by having a renewable resource, especially photovoltaic, more efficient than in neighbouring countries. The electricity export is a first floor.

The increase in electricity demand is a second floor. If electricity goes down in price it causes demand to increase. New uses appear, such as the electric car, and uses that are encouraged. As when prices are high some companies leave, decreasing national consumption, when the price goes down companies come looking for that opportunity.

A third floor is caused by the replacement of gas by electricity, another source of increased demand.

How has the 7% tax influenced from April 1?

The tax that was reintroduced on April 1 caused an increase in the electricity market price of 5% in the first weeks and is currently in the order of 3%, although it is a difficult effect to quantify. Consumers are the ones who pay the tax and also our generators are affected with respect to competitors from across the border that became to match more in the market since April 1. We hope that this unfair tax collection, which was created in 2012 when the country needed those resources, be repealed definitively.

How does AleaSoft see Spain in a few years with the introduction of renewable energy?

Renewable energies are a hope for a very prosperous future for Spain. If the solar resource and the wind resource are exploited properly, Spain can go from being a net importer of energy to being a net exporter. Renewable energies will be a source of social and economic development, as well as being a fundamental factor in reversing climate change.

When you see the images of regions like Dubai in the year 1970 and compare them with the current ones, you see a radical change. The resources that came from oil have been reinvested in financial services, architecture and tourism. Dubai should be an example for the most economically disadvantaged regions of Spain, since they are the ones with the greatest potential for renewable energies.

We have seen that AleaSoft is in Intersolar, the most important fair in the sector. How is it going?

We will be Intersolar from today until Friday 17 that ends. We are in stand C4-617 in case you want to visit us. As you say it is the most important annual fair in the solar sector. The issue of forecasts is essential for making investments, we are having many visits and consultations. Many companies want to take advantage of the photovoltaic revolution.