MIBEL returns to be protagonist, it is the only European market where prices rise this week

AleaSoft, May 16, 2019. This week, between May 13 and 16, the MIBEL Iberian electricity market prices raised compared to the first four days of last week, once again being the protagonist in Europe, where the rest of the most important electricity markets lowered prices in the same period. According to the analysis carried out by AleaSoft, the decrease in wind and nuclear energy production are the main causes of the rise in MIBEL prices.

In the first four days of this week, from May 13 to 16, the average price of the MIBEL market in Spain and Portugal was 51.18 €/MWh, around 8% higher than that of the homogeneous days of last week. Among the most important electricity markets in Europe, MIBEL is the only one in which prices raised in this period, behaviour contrary to last week when MIBEL was the protagonist as the only market where prices fell. AleaSoft analysed the fundamental causes of this price increase in MIBEL and points to the drop in wind energy production in the Iberian Peninsula, by 26% compared to last week, and the decrease in nuclear energy production due to the fact that currently the Ascó II and Trillo nuclear power plants are stopped for refuelling.

On the other hand, in the rest of European electricity markets, prices fell so far this week, between the -3.3% of the Nord Pool market of the Nordic countries, and the -11% of the EPEX SPOT market of the Netherlands. The increases of the wind energy production in France, of 47% with respect to the last week, and of the solar energy production in Germany, of 45% in the same period, are factors that favoured the decrease of the prices.

European markets continue to be divided into two groups according to their price. In the group of markets with higher prices are the N2EX market of Great Britain, which this week was between 45 €/MWh and 50 €/MWh, and the MIBEL of Spain and IPEX market of Italy with prices higher than 50 €/MWh most of this week.

In the group with the lowest market prices, around 40 €/MWh, there are the Nord Pool market and the EPEX SPOT markets of Germany, France, Belgium and the Netherlands. 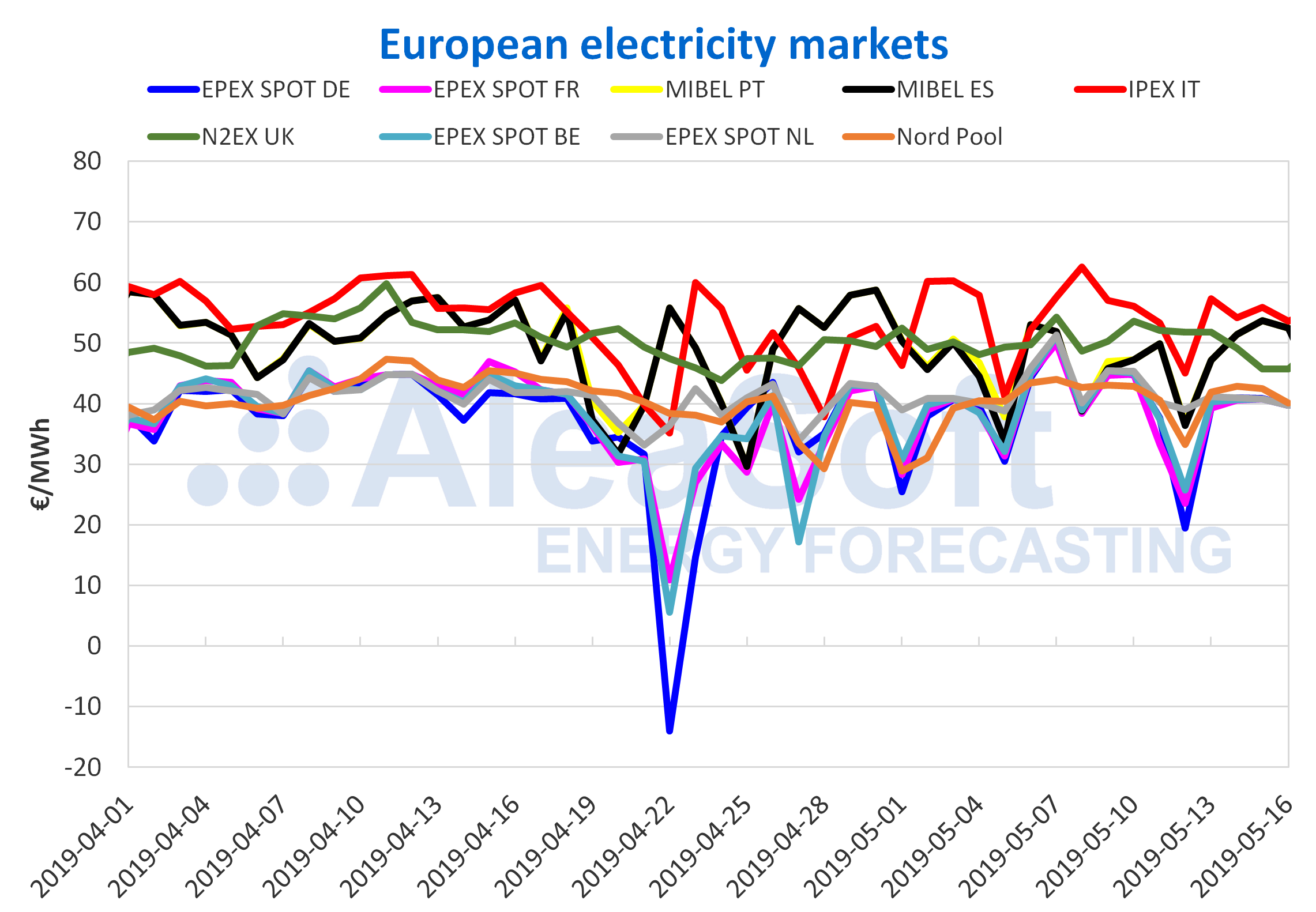 The price of Brent oil futures for the month of July in the ICE market settled this Wednesday, May 15, at 71.77 $/bbl, with an increase of 1.6% compared to Wednesday of the previous week. Since Tuesday of this week they have again exceeded 71 $/bbl. This market is being very influenced in recent days by the tension that is being lived in the Strait of Hormuz after United States intensified the sanctions on Iran. In addition, other elements that affect the supply of crude, such as Venezuela’s political instability and OPEP cuts, remain in force. On the other hand, the commercial conflict between the United States and China can cause the world economy to weaken, causing a decrease in the demand for crude oil.

Futures of TTF gas for June in the ICE market continue this week with stable values below 14 €/MWh with a slight downward trend. Yesterday, May 15, they settled at 13.86 €/MWh, 1.0% lower than Friday May 10.

Spain’s electricity futures in the EEX and OMIP markets for the third quarter of 2019 and for the year 2020, this week have been above 55 €/MWh, with a slight decreasing trend, mainly in the EEX market that in the session on May 15 fell by 2.1% compared to the session on Friday, May 10, for the case of the next quarter, and by 0.7% for the case of next year’s futures.

The Portugal futures for the next quarter and year in the OMIP market also had a decreasing trend the first two days of this week, but in the yesterday´s session rose to around 56 €/MWh, values that represent an increase with respect to Friday’s session last week of 0.9%, for the case of the analysed quarterly future, and 0.5% for the future of the year 2020.

The futures of France and Germany in the EEX market for the next quarter settled yesterday, May 15, at 43.14 €/MWh and 42.68 €/MWh, values that represent a decrease compared to the Friday of the previous week of a 3.3% and 2.4% respectively. The futures for the next year of these two countries during the first two days of the week had a decreasing tendency, but in the session of Wednesday they rose, which caused that they were in values similar to those of Friday of last week, of 52.21 €/MWh in the case of France and 48.82 €/MWh in the case of Germany.

So far this week, wind energy production in Spain decreased by 27% and it is expected that next week will have similar values and even slightly lower than the current week.

At this moment two nuclear power plants, Trillo and Ascó II, are stopped, which caused a decrease in nuclear energy production of 16% in the days that have elapsed this week. The scheduled stop for refuelling of the Trillo nuclear power plant began last Friday, May 10, and is expected to return to operation on June 9, while the Ascó II must return to work on May 31.

In the first three days of this week of May 13, hydroelectric energy production remained similar to the homogeneous days of last week. 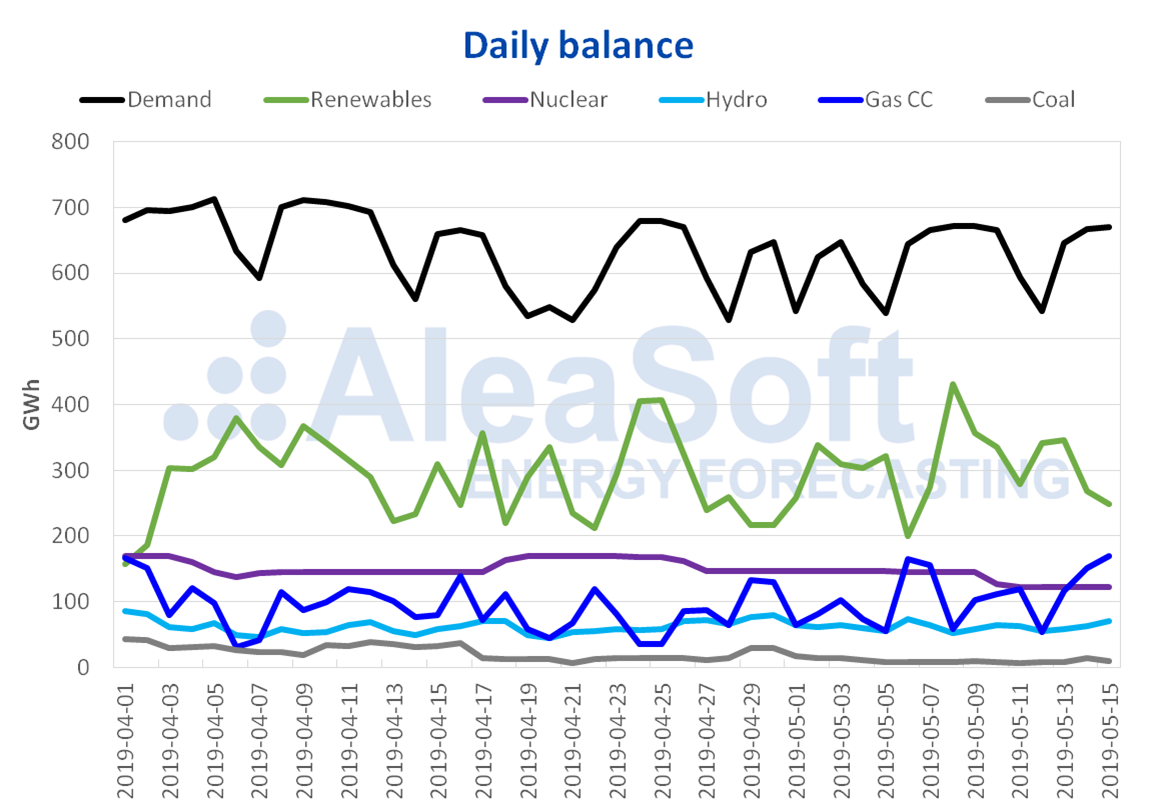 Hydroelectric reserves increased by 109 GWh compared to the previous week, reaching up to 12 332 GWh at present, which constitutes 53% of the total capacity, according to the latest Hydrological Bulletin of the Ministry for Ecological Transition.