January 2022: A month of macrovolatility in the European electricity markets

AleaSoft Energy Forecasting, January 31, 2022. In January, the average price of the European electricity markets exceeded €165/MWh in most cases. These prices were lower than those of December but much higher than those of January 2021. During the month there were hours with negative values in some markets and others with very high values, as in the British case where £1100/MWh were exceeded on three occasions, an example of the macrovolatility of the markets. The increase in solar energy production in all markets stands out.

The solar energy production increased in January 2022 in year‑on‑year terms in all analysed markets. The analysis used real data up to January 30 and forecasts of AleaSoft Energy Forecasting for the 31st. In the Iberian Peninsula, the production increased considerably compared to that registered in January 2021, 102% in Portugal and 81% in Spain. According to data from REN, the Portuguese system operator, between January 2021 and December 2021, the installed solar energy capacity increased by 500 MW, which represents an increase of 57%. In the case of Mainland Spain, the solar photovoltaic energy  capacity increased by 3054 MW, 26%, between January 2021 and January 2022, while the solar thermal energy capacity did not change, according to data from the Spanish operator REE. In the rest of the analysed European markets, the year‑on­‑year increases for the first month of 2022 were 57% in Germany, 47% in France and 42% in Italy.

In the comparison with December 2021, the solar energy production of January 2022 also increased in all markets. The increases were between 34% of the markets of Germany and France and 53% of the Spanish market. 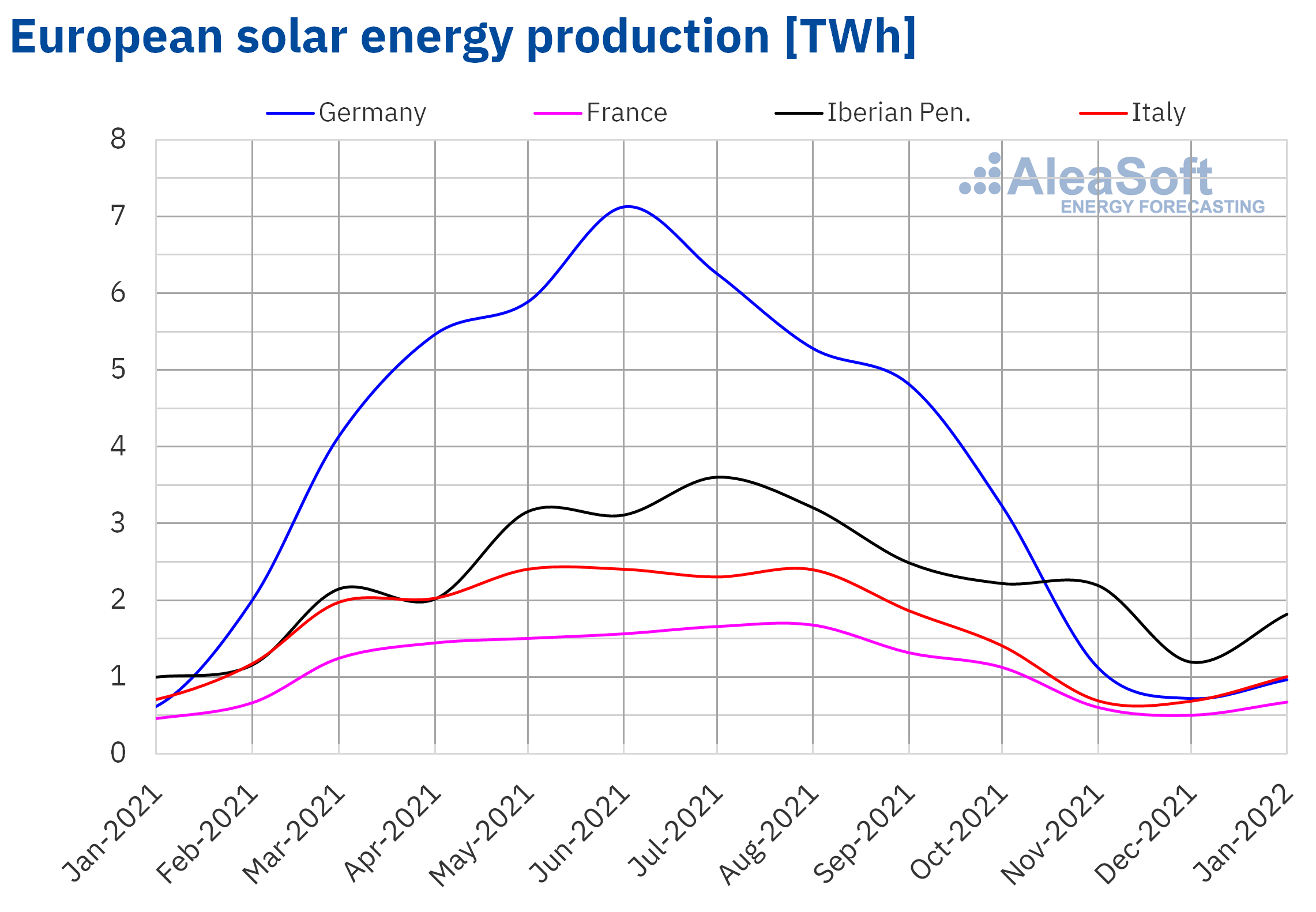 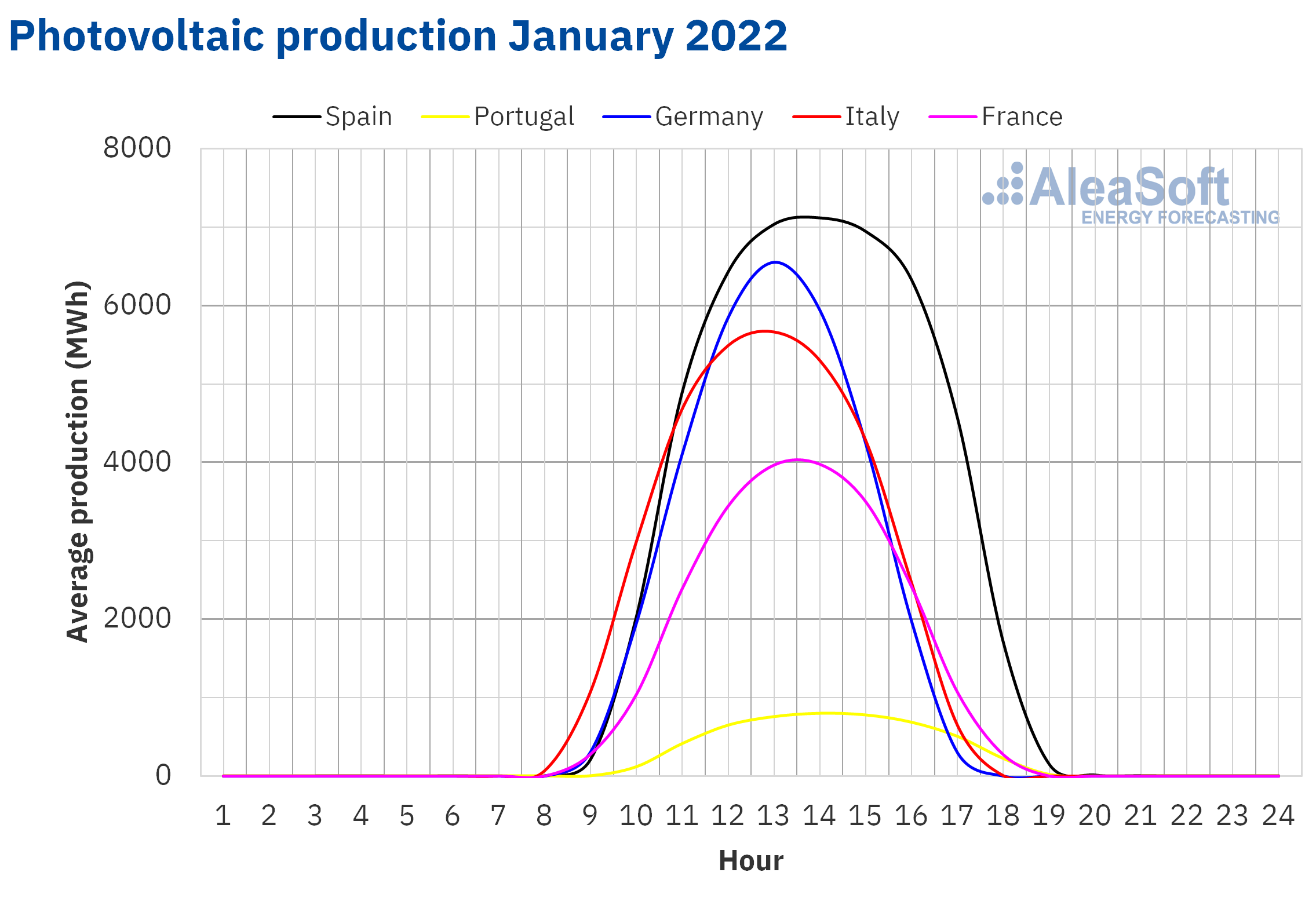 In the case of the wind energy production of January 2022, also taking into account real data until the 30th and forecasts of AleaSoft Energy Forecasting for the 31st, the highest year‑on‑year increase was registered in the German market, which was 40%. In the rest of the markets, the production with this renewable technology decreased between 24% of the Spanish market and 6.0% of the Italian market.

The production of January 2022 compared to that of the previous month also registered an increase of 32% in the German market. In the rest of the markets, as in the year‑on‑year comparison, there were falls compared to the wind energy production of December 2021, of 28% in France, 23% in the Iberian Peninsula and 11% in Italy. 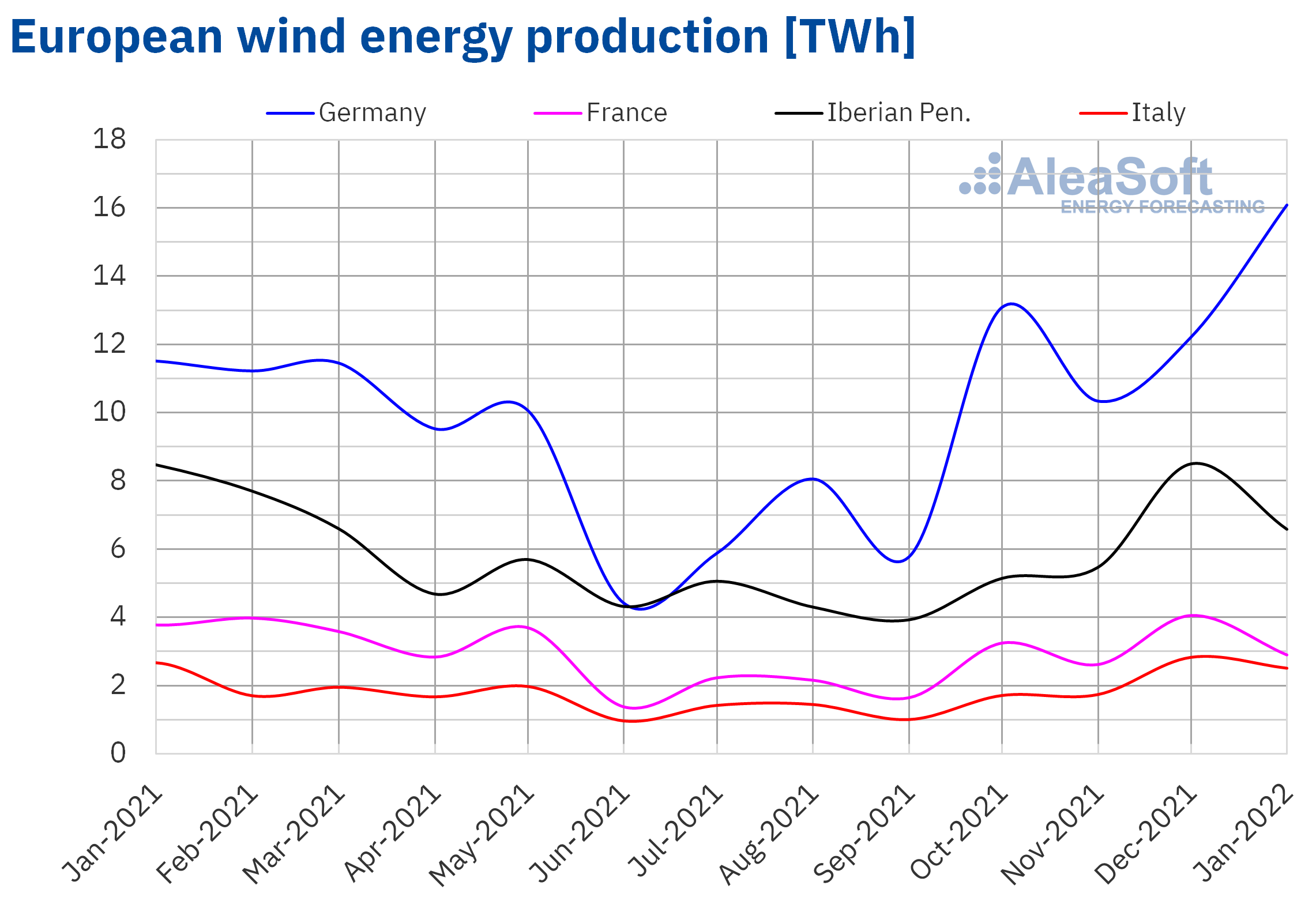 Regarding the behaviour of the electricity demand, during the month of January 2022, year‑on‑year decreases were registered in most European markets, according to real data until January 30, 2022 and forecasts of AleaSoft Energy Forecasting of January 31, 2022. The demand was the lowest for a January since 2016 in the markets of Portugal and Spain, where year‑on‑year falls of 6.9% and 5.5%, respectively, were registered.

The increases in average temperatures compared to January 2021 were more notable in this period in the markets of Great Britain and Belgium, rising up to 2.0 °C in the first of them. These increases led to both markets registering the second lowest value of demand in history for a month of January, after the minimum of 2020. The decreases in demand in these markets were 2.9% and 2.5%, respectively.

Comparing with the previous month, December 2021, the drop in average temperatures in January 2022 towards colder values ​​allowed the rise in demand in most European markets, according to real data up to January 30, 2022 and forecasts of AleaSoft Energy Forecasting for January 31, 2022. In addition, the effect of Christmas and year‑end holidays also favoured the recovery in January. The markets that stood out the most were Portugal and France, since they registered increases of 8.0% and 6.6%, respectively. Precisely the Portuguese market together with the Spanish one had the most significant decreases in average temperatures of the first month of 2022, which were 2.4 °C in both cases. These decreases in average temperatures caused Spanish demand to rise 3.4% compared to the last month of 2021. In the Belgian market, the increase in demand was 3.5%. On the other hand, the markets of Germany and Great Britain registered increases of 2.5% in both cases. 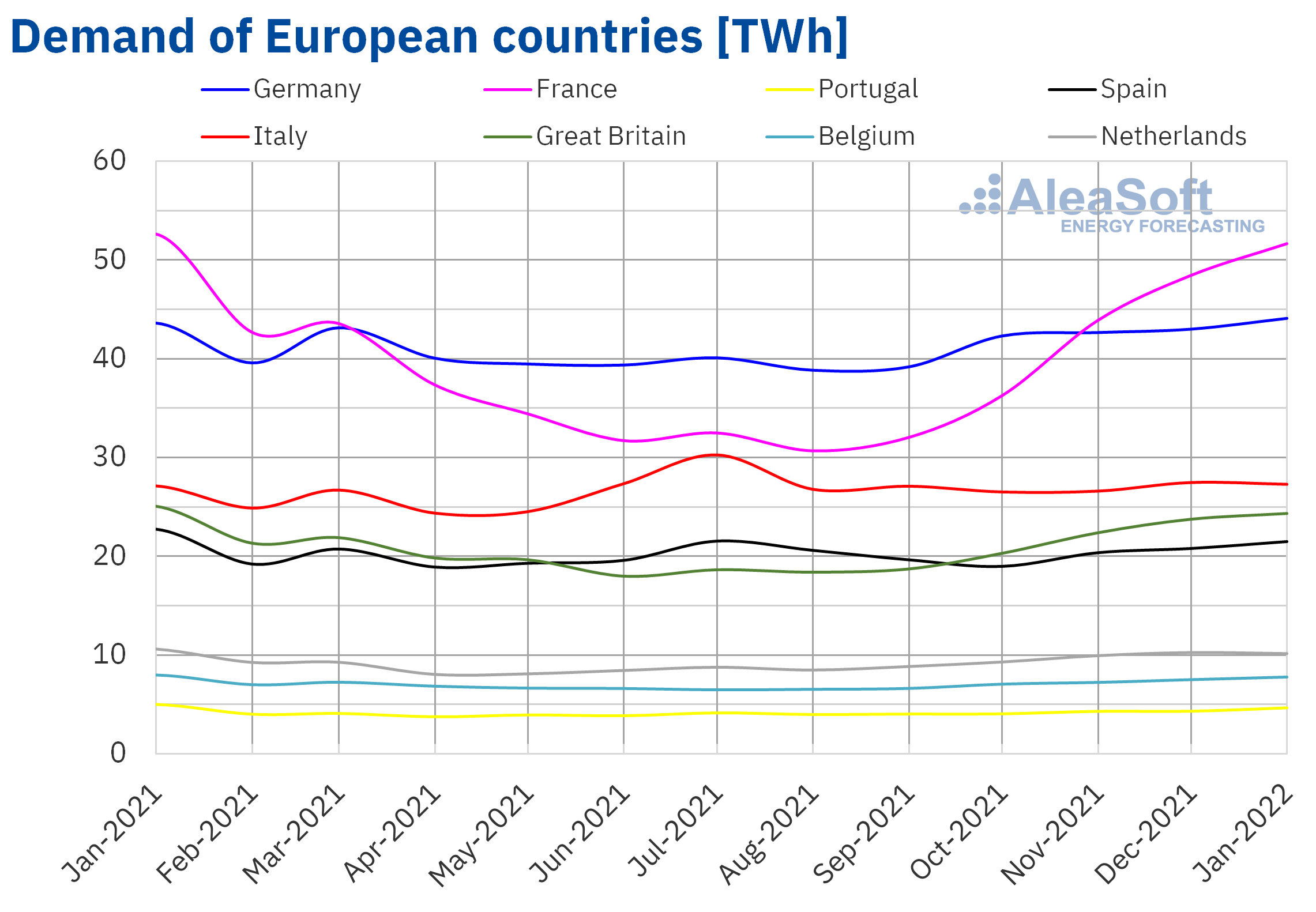 In the month of January 2022, the monthly average price was above €165/MWh in almost all European electricity markets analysed at AleaSoft Energy Forecasting, exceeding €215/MWh in some cases. The exception was the Nord Pool market of the Nordic countries, with an average of €93.25/MWh. In contrast, the highest monthly average price, of €224.50/MWh, was that of the IPEX market of Italy, followed by that of the N2EX market of the United Kingdom, of €218.94/MWh. In the rest of the markets, the averages were between €167.73/MWh of the EPEX SPOT market of Germany and €211.42/MWh of the EPEX SPOT market of France.

Compared to the month of December 2021, in January average prices fell in all European electricity markets analysed at AleaSoft Energy Forecasting. The largest fall, of 37%, was registered in the Nord Pool market, while the smallest decreases were those of the MIBEL market of Spain and Portugal, of 16% in both cases. The rest of the markets had price decreases between 20% of the Italian market and 24% of the markets of Germany and the United Kingdom.

However, if average prices for the month of January are compared with those registered in the same month of 2021, prices increased significantly in all markets. The largest increase in prices was that of the Italian market, of 270%. In the rest of the markets, the price increases were between 104% of the Nord Pool market and 255% of the French market.

In the month of January, gas and CO2 emission rights prices continued to be high. However, gas prices fell from the previous month’s record prices. This favoured the decrease in prices in the European electricity markets compared to that month, despite the increase in demand in most markets. In addition, the general increase in solar energy production and the increase in wind energy production in Germany also contributed to this behaviour. In the case of the MIBEL market, the recovery in nuclear energy production levels also exerted its downward influence on prices.

In contrast, in January 2022, gas prices were more than four times higher than those of the same month of the previous year and CO2 emission rights prices were also much higher. This favoured the year‑on‑year increase in European electricity markets prices. In addition, the wind energy production was lower than that of January 2021 in most markets. 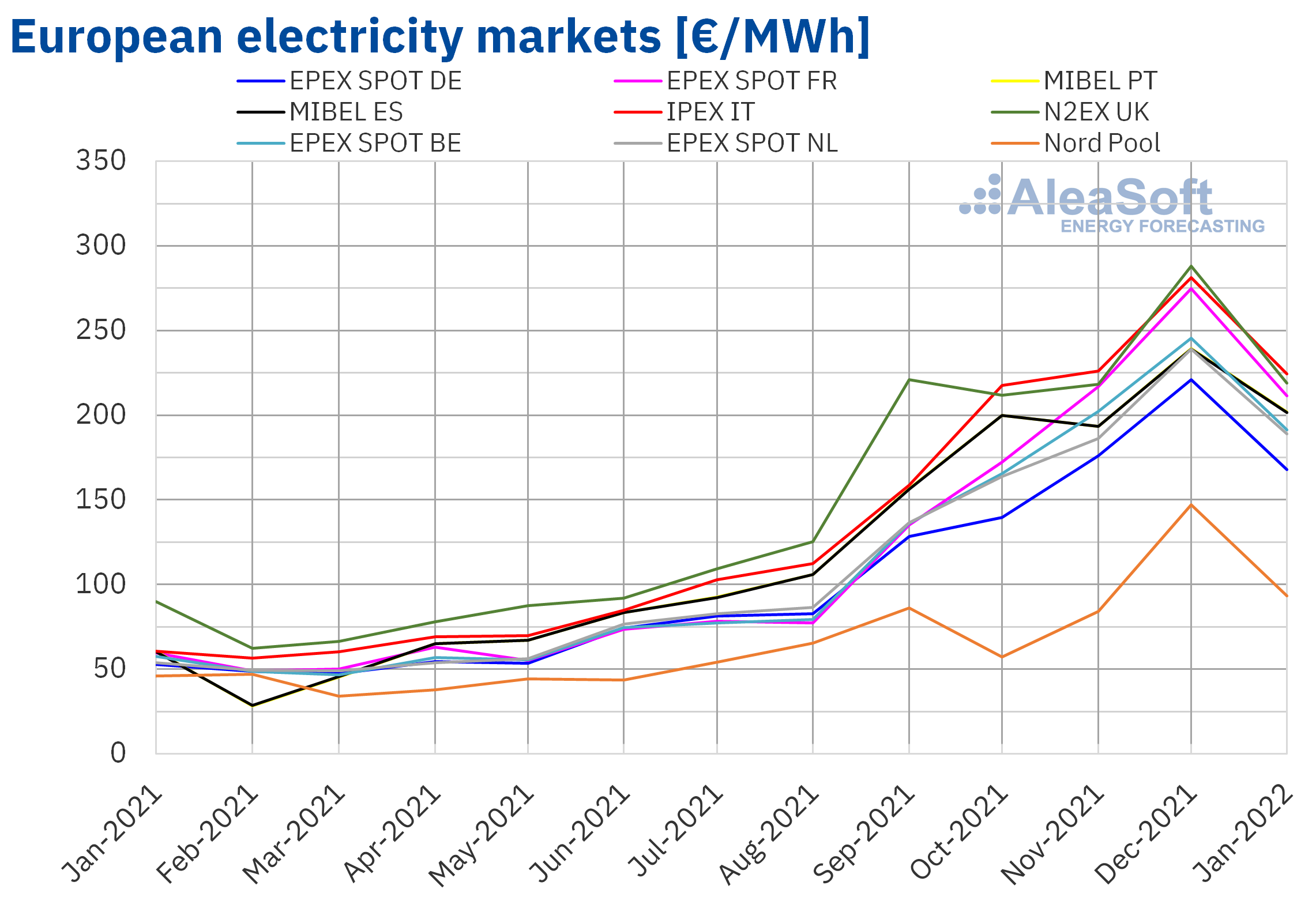 During the month of January 2022, electricity futures prices for the second quarter of the year registered a rise in the last week of the month that ended up representing a positive balance if settlement prices of the first and last Friday of the month are compared. The futures of France and Italy in the EEX market disputed the title of the market with the highest prices for this product during the month. The difference between the prices of Nordic products and those of the rest of the European markets during the month of January remained between €120/MWh and €150/MWh. 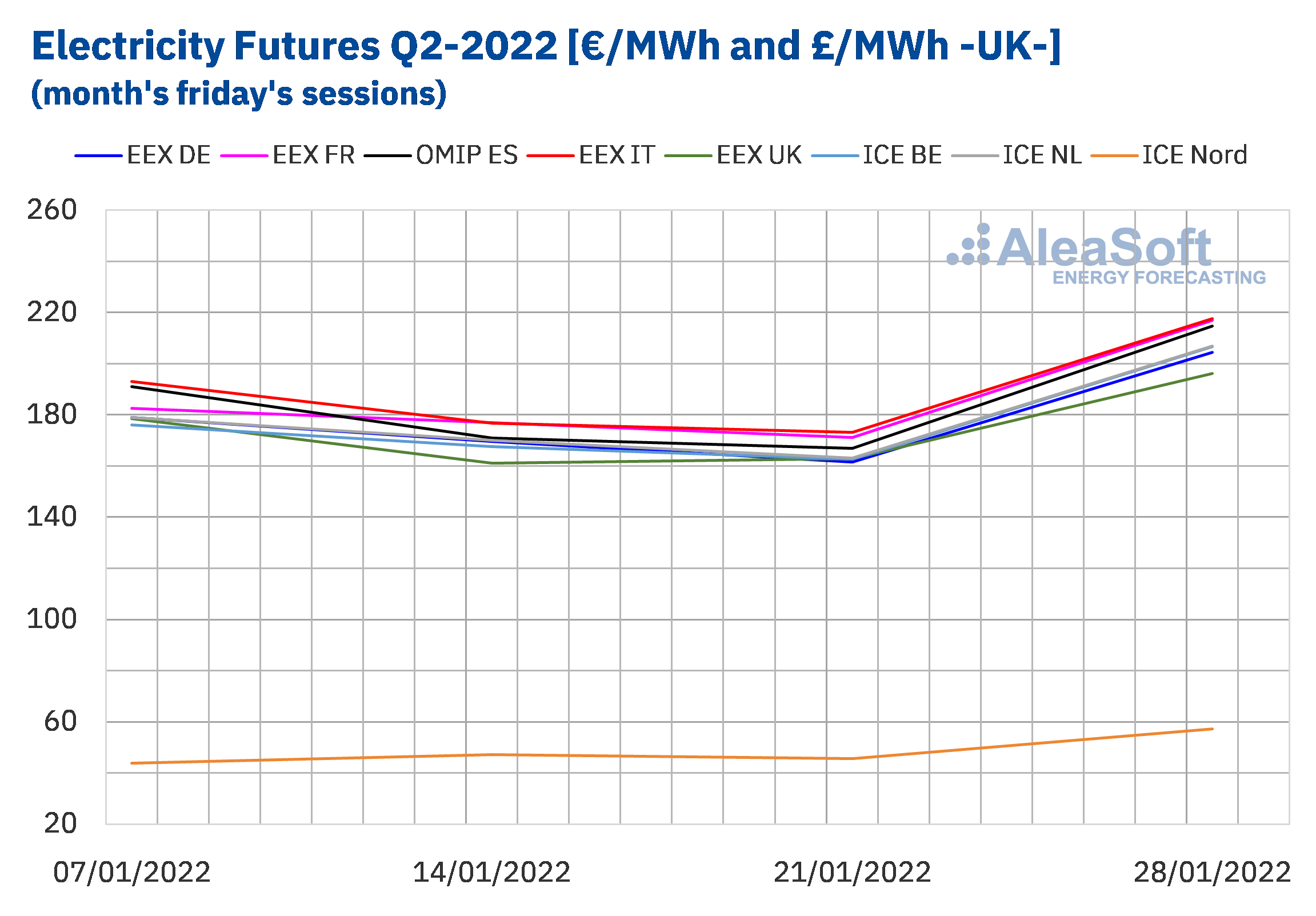 On the other hand, electricity futures prices for the next year 2023 had a similar behaviour, although with lower differences. In this product, the EEX market of France prevailed as the one with the highest prices during most of the month. After the drop of the second week of the month, prices rose again and January ended with increases in settlement prices between the first and last Friday of the month in all markets analysed at AleaSoft Energy Forecasting. The ICE market of Belgium was the one with the highest rise in absolute terms, with an increase of €30.70/MWh. Meanwhile, in percentage terms, the ICE market of the Nordic countries increased its price by more than 30%. 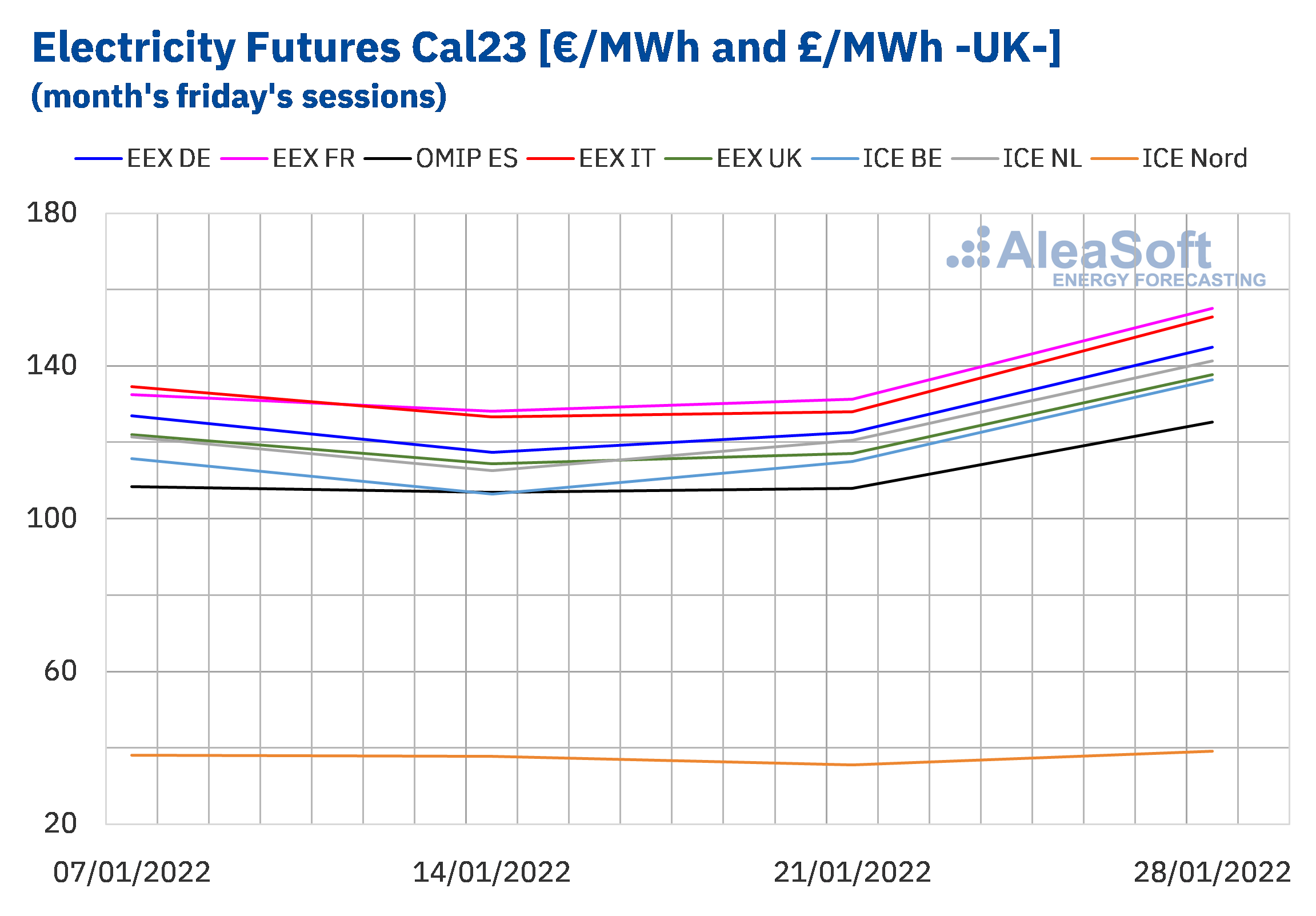 During the month of January, Brent oil futures prices registered an upward trend. One of the main factors behind this rise is the escalation of tension between Russia and Ukraine. Added to this is that, despite the high number of coronavirus infections, the demand remained high. In addition, the month started with supply problems in Kazakhstan and Libya, which also contributed to the rise in prices.

At the next OPEC+ meeting, scheduled for February 2, the increase in production for the month of March must be agreed. However, some countries may find it difficult to increase their production levels due to the lack of investment.

Tensions between Russia and Ukraine affected gas prices in January. In addition, these could put at risk the entry into operation of the Nord Stream 2 gas pipeline, which is not scheduled before the summer, which would further stress the market. The European Union is looking for alternatives to gas from Russia, which would consist mainly of increasing imports of gas from Norway and Algeria, as well as shipments of liquefied gas from the United States.

The settlement prices of CO2 emission rights futures remained above €80/t during the month of January 2022. The upward trend registered for most of the month allowed reaching a record price of €89.76/t on January 27. 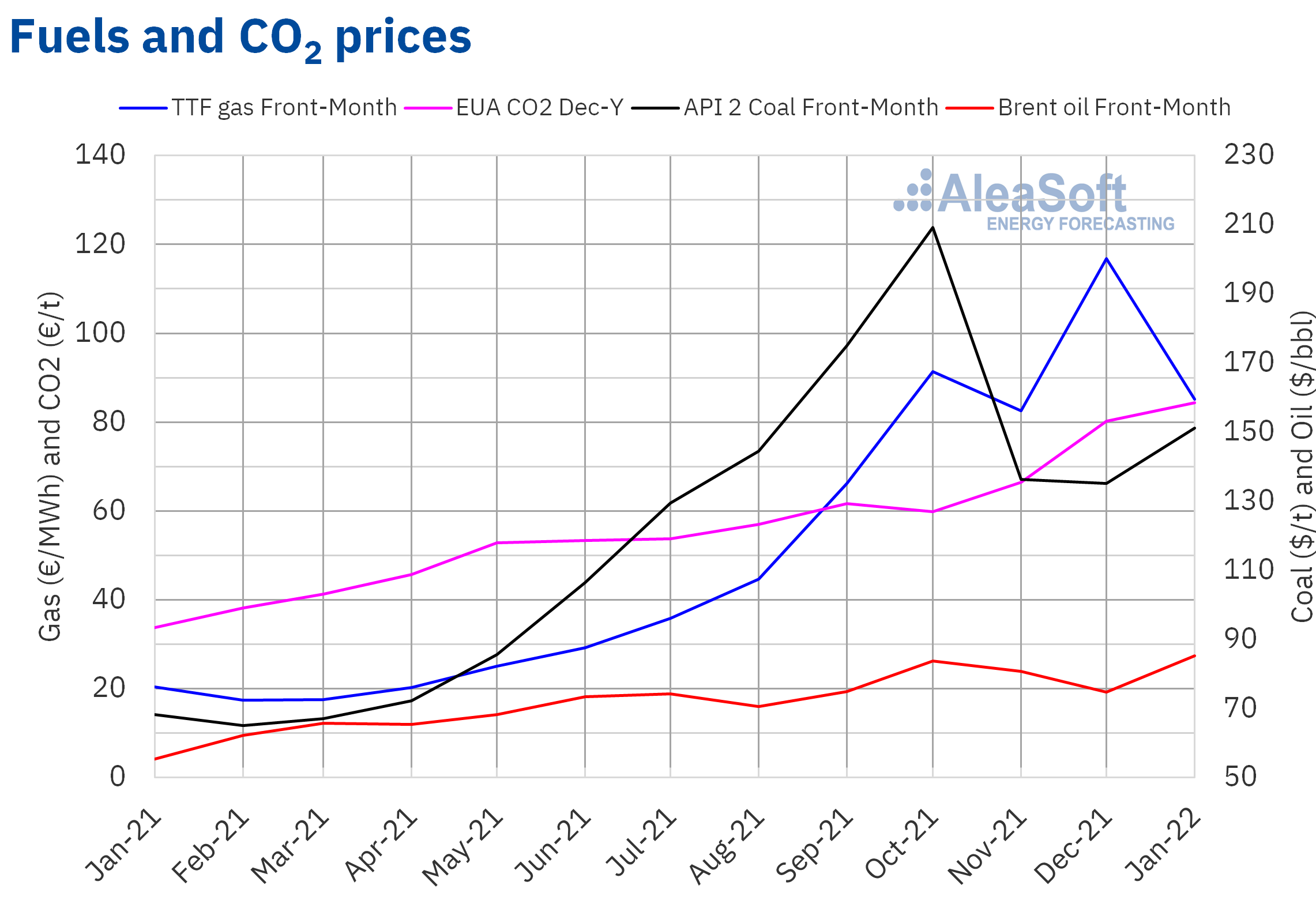 A very useful tool to analyse the evolution of the energy markets is Alea Energy DataBase (AleaApp), developed by AleaSoft Energy Forecasting. Alea Energy DataBase (AleaApp) compiles the updated information of the main variables of the markets and includes tools that facilitate its visualisation and analysis. Available data include electricity markets prices, demand, production by technology, fuels and CO2 emission rights prices and macroeconomic data. In addition, new variables and new markets are periodically included, making it a constantly growing database. A trial period is currently being offered at no associated cost for clients and collaborators of AleaSoft Energy Forecasting, which will be available until March 31 of this year.

The situation of high prices in the electricity markets is having a particularly serious impact on large and electro‑intensive consumers, for whom electricity represents a considerable part of production costs. To analyse how the sector is experiencing this situation and the possibility of signing PPA contracts with the coverage of the Statute of Electro‑intensive Consumers, the next AleaSoft Energy Forecasting’s webinar will feature the participation of Fernando Soto, Director‑General of AEGE, and Juan Puyol, Deputy Director at Cesce in the analysis table of the Spanish version of the webinar. This webinar will be held on February 10 and it will also analyse the macrovolatility situation of the European energy markets and the prospects from the first quarter of 2022. In addition, AleaSoft Energy Forecasting’s services that allow responsible risk management and contribute to the energy transition will be discussed.