The ‘joy’ in the renewable energy financing continues despite the crisis

AleaSoft, September 18, 2020. ‘Joy and optimism’ with those words the speakers at the webinar “Energy markets in the recovery from the economic crisis” described the mood among developers and funders of new renewable energy projects in Spain and Europe in general. While everything was momentarily paralysed during the peak of the COVID-19 health crisis, within a few weeks most projects, whether on paper or on the ground, were started again.

Observing the graph of the evolution of the renewable energy installed capacity in Spain in recent months, hardly any stop can be perceived during the most critical months of the crisis in March and April. The experts consider that the average delay that a new wind or photovoltaic energy project may have accumulated due to measures against the pandemic does not exceed thirty days. The most evident proof of this is the milestone of 10 GW of photovoltaic capacity reached throughout the Spanish territory, when just over a year ago it was below 5 GW. 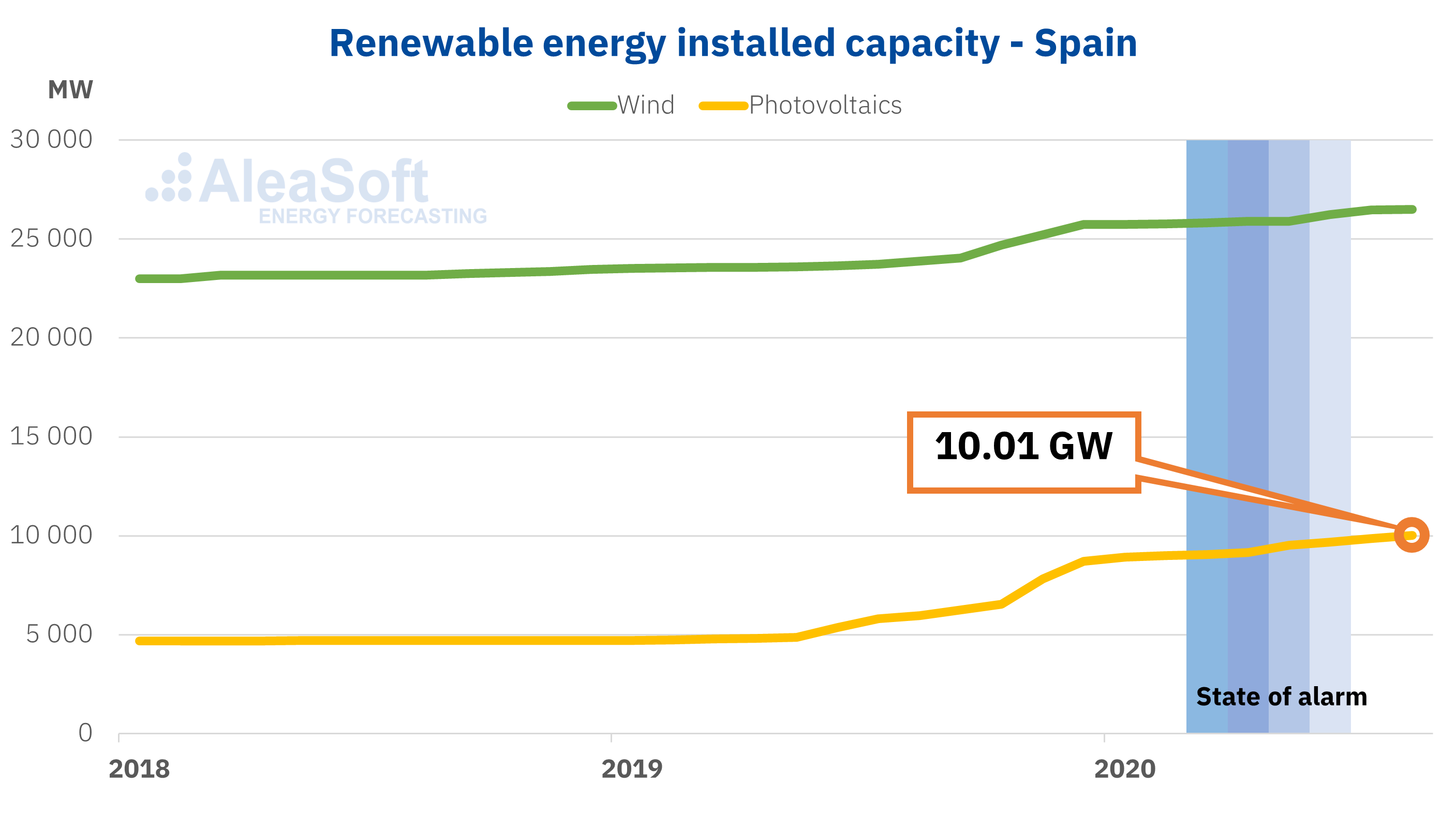 During the AleaSoft’s webinar “Energy markets in the recovery from the economic crisis (I)” and the subsequent analysis table, the speakers agreed that “the worst is over”. Proof of this is the recovery of the electricity demand in the European countries, which this summer approached the demand levels of 2019, also favoured by the high temperatures registered. Even so, the recovery in demand, after the well where it fell in March, April and May, was relatively rapid, although the pre-crisis levels will still take time to reach.

The recovery of the energy markets prices was also clear. The Brent oil, the TTF gas and the CO2 emission rights registered an even faster recovery than could be expected from such an acute crisis. Although the CO2 is the only one that recovered, and even surpassed, the previous levels, both the gas and the oil are on an upward path in the medium term. The rise in the prices of the fuels and CO2 pushed the prices of the spot and futures electricity markets to a speedy recovery.

Another point of the content of the webinar was the financing of the renewable energy projects, in which according to the speakers it was not practically affected by the crisis either. “The vision was not changed and, in fact, the crisis was ended with a greener conscience”, was commented. There is a lot of money promised in the recovery plans and for the energy transition and the Energy and Climate Plans, but the political initiative to implement these aid is lacking. These grants are of special relevance for green hydrogen or energy storage projects, because they have no option of a PPA or so accessible financing.

On the side of the banks and investors, the financing continues as active as before the crisis. Obviously, the crisis and current uncertainty make the investments try to minimise risk further and the conditions are somewhat stricter, but all this did not slow down the pace of new projects.

The price factor of renewable energies was also a topic of special debate as a result of questions from the audience. On this, the speakers agreed that the cannibalisation of prices by photovoltaics “cannot be infinite”. In other words, on average the photovoltaic energy captured price cannot always fall to zero. The key, they commented, is in the response to the lawsuit. Demand has, and will have even more, some flexibility that will allow it to adapt to take advantage of the most favourable price moments, increasing demand at times of greater solar energy production and avoiding the price to collapse. New electricity demand will also appear from electric vehicles charging, green hydrogen production and industry electrification.

The webinars on the recovery from the crisis

All these topics were analysed and debated in the webinar “Energy markets in the recovery from the economic crisis” organised by AleaSoft and which was held on September 17, together with a subsequent discussion table. The webinar was attended by two invited speakers: Daniel Fernández Alonso, Head of Energy Management at ENGIE Spain and Roger Font, Projects, Assets and Specialised Businesses Global Manager at Banco Sabadell. The recording of the event can be requested at webinar@aleasoft.com.

The second part of the webinar is scheduled for October 29, and will be attended by two invited speakers from the consulting firm Deloitte: Pablo Castillo Lekuona, Senior Manager of Global IFRS & Offerings Services, and Carlos Milans del Bosch, Partner of Financial Advisory.