Peaks of more than €200/MWh in the electricity markets of Germany, Belgium, France, the Netherlands and Great Britain

AleaSoft, September 21, 2020. The price between 7:00 pm and 8:00 pm of September 21 exceeded €200/MWh in the markets of Germany, Belgium, France, the Netherlands and Great Britain, favoured by the low French nuclear energy availability. In the case of the German and Netherlander markets, values as high as this were not reached since 2012. During the rest of the fourth week of September, an increase in wind energy production is expected in most of the markets, which will lead to a decrease in the price.

For the first 20 days of September, the outlook for the solar energy production in Europe was quite encouraging. The generation with this technology increased by 56% in Mainland Spain. This rise was favoured by the 1100 MW of new photovoltaic capacity installed nationwide compared to 2019, which just exceeded 10 GW, with a total of 10 013 MW, according to REE data at the end of August 2020. Other important increases in solar energy production in this period were those of Germany and Portugal, whose values were 22% and 17% respectively. In the Italian market the increase was 11% while in the French it was 9.9%.

On the other hand, in the week that began on Monday, September 14, there was a general decline in solar energy production in the European markets compared to the previous week. However, in Germany there was an increase of 5.3%. The most notable falls were in the markets of Spain, Portugal and France, which were 36%, 20% and 14% respectively. In the Italian market the decrease was 5.9%.

The AleaSoft’s solar energy production forecasting shows a recovery in Spain and falls in Germany and Italy for the week of September 21. 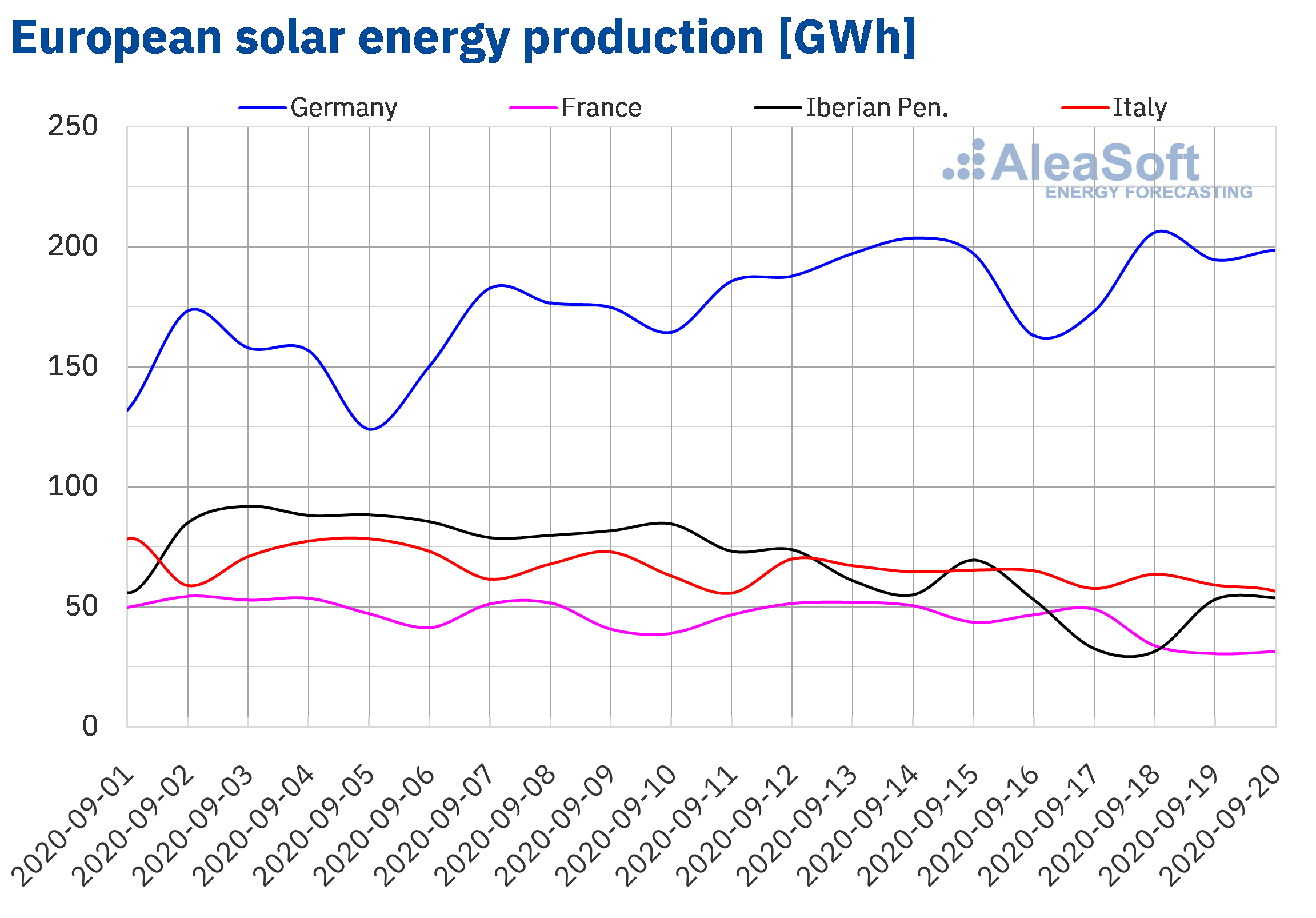 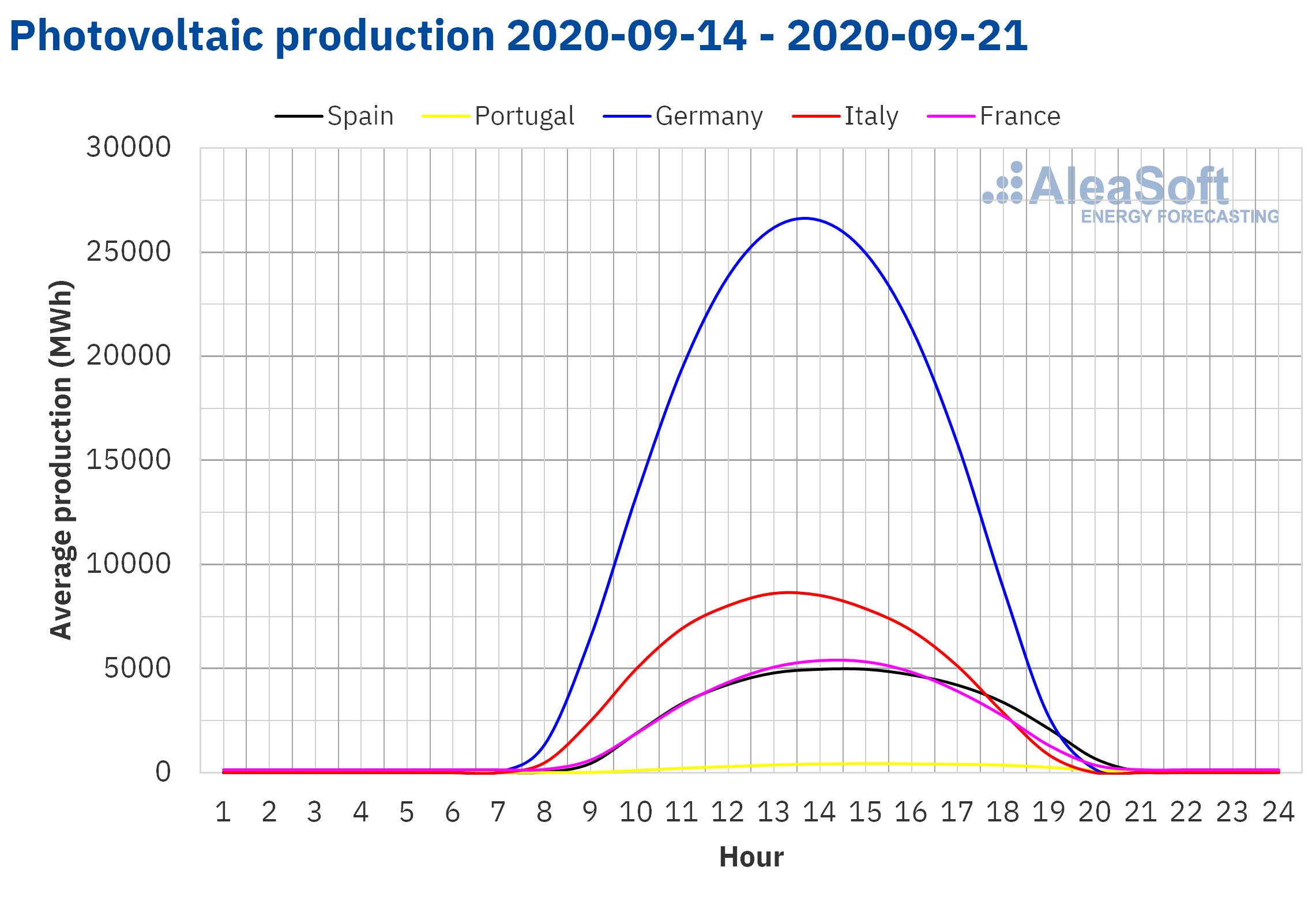 As for the wind energy production, there was an uneven performance in the electricity markets of Europe during the week of September 14. On the one hand, in the French market, the production doubled and was 126% compared to the previous week, thanks to the high production registered from Thursday to Saturday. There were also increases in Italy and Portugal, which were 32% and 11% respectively. While, on the other hand, in Germany and Spain there were falls of 21% and 12% in that order.

From September 1 to 20, the generation from this renewable source plummeted in the European markets year‑on‑year. The markets of Portugal and France registered the worst drops, falling by 28% and 22% respectively. In the rest of the markets, there were declines of between 16% and 17%.

For the fourth week of September, the wind energy production will recover in most European markets, according to the AleaSoft’s forecasting. 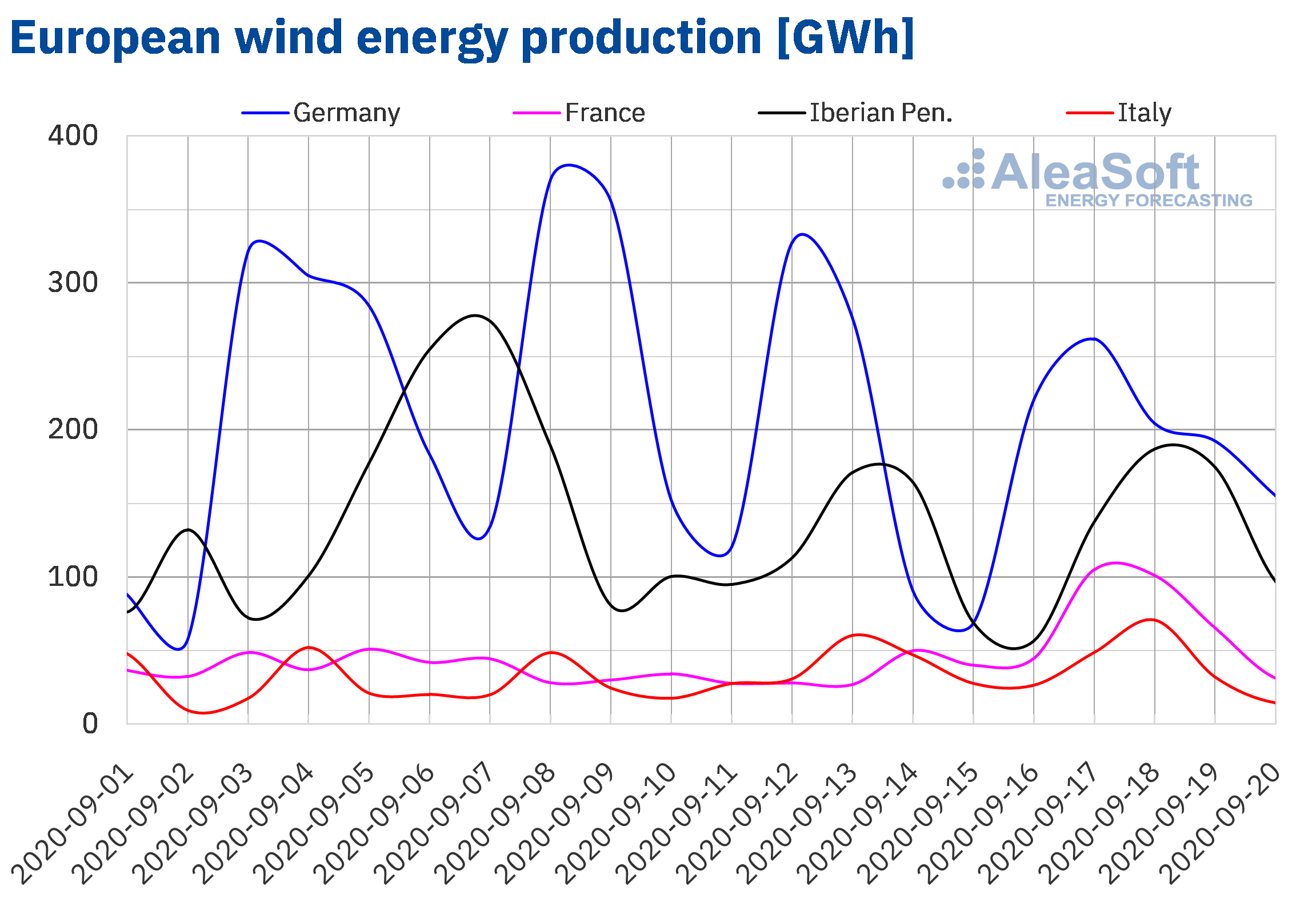 The electricity demand increased in most European markets during the week of September 14 compared to the second week of September. The exceptions were the markets of Portugal and the Netherlands where the demand decreased by 2.3% and 3.2% respectively. On the other hand, the largest increase was registered in the British market, which was 2.6%, while the smallest increase was in the Belgian market, with a variation of 0.7%. In the rest of the markets, the growth in demand was between 1.3% and 1.9%. The average temperatures during the third week of September increased in most of the continent between 0.1 °C and 2.7 °C compared to the previous week, with the exception of Spain and Portugal where they fell 0.1 °C and 2.5 °C in each case.

The analysis of the behaviour of the demand during the last three weeks can be carried out at the AleaSoft’s electricity markets observatories. This data has hourly, daily and weekly visualisations.

For the week of September 21, the AleaSoft’s demand forecasting indicates that it will decrease in most of the analysed European markets compared to the third week of September. The exceptions will be the markets of Portugal, the Netherlands and Great Britain where the demand is expected to increase. 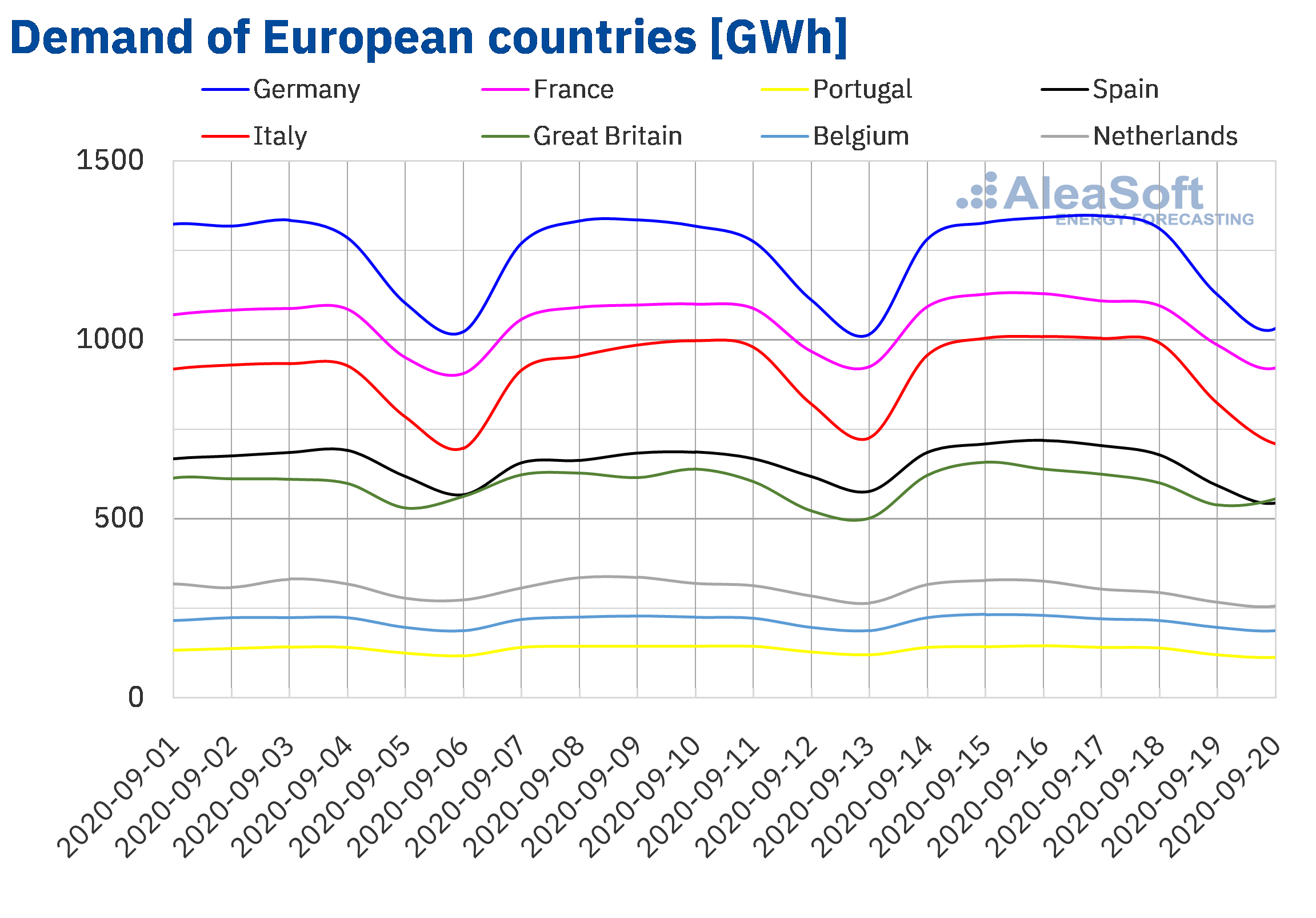 The week of September 14, the prices of most of the analysed European electricity markets increased, except for those of the Nord Pool market of the Nordic countries. In this market there was a slight decrease of 0.6%. On the other hand, the market with the highest price increase, of 28%, was the EPEX SPOT market of Germany, followed by the EPEX SPOT market of the Netherlands, with an increase of 19%. In the rest of the markets, the price increases were between 6.0% of the MIBEL market of Spain and Portugal and 15% of the N2EX market of Great Britain.

The third week of September, weekly average prices above €40/MWh were reached in most of the analysed European electricity markets. The highest, of €52.64/MWh, was that of the IPEX market of Italy. €50/MWh was also exceeded in the markets of France and Great Britain, with prices of €51.32/MWh and €51.21/MWh respectively. On the other hand, in the Nord Pool market there was an average price much lower than the majority, of €16.85/MWh. The rest of the markets had average prices between €44.60/MWh of the MIBEL market of Portugal and €48.47/MWh of the German market.

On the other hand, the first two days of the third week of September, the European markets prices were closely coupled. The exceptions were the MIBEL and the Nord Pool markets, whose prices were lower than those of the rest and also very different from each other, with the Nordic countries having the lowest prices. The rest of the week the coupling decreased a bit, but the MIBEL market had prices similar to those of most markets. In contrast, the Nord Pool market continued to be the one with the lowest prices by a large difference.

But on Monday, September 21, at the hour 20, there were even higher hourly prices. In the markets of Germany, Belgium, France and the Netherlands, the price was €200.04/MWh. In Great Britain, a price of €204.78/MWh was reached. In the case of the German and Netherlander markets, the achieved hourly price was the highest since February 2012. These high prices are related to lower levels of nuclear energy availability in France. 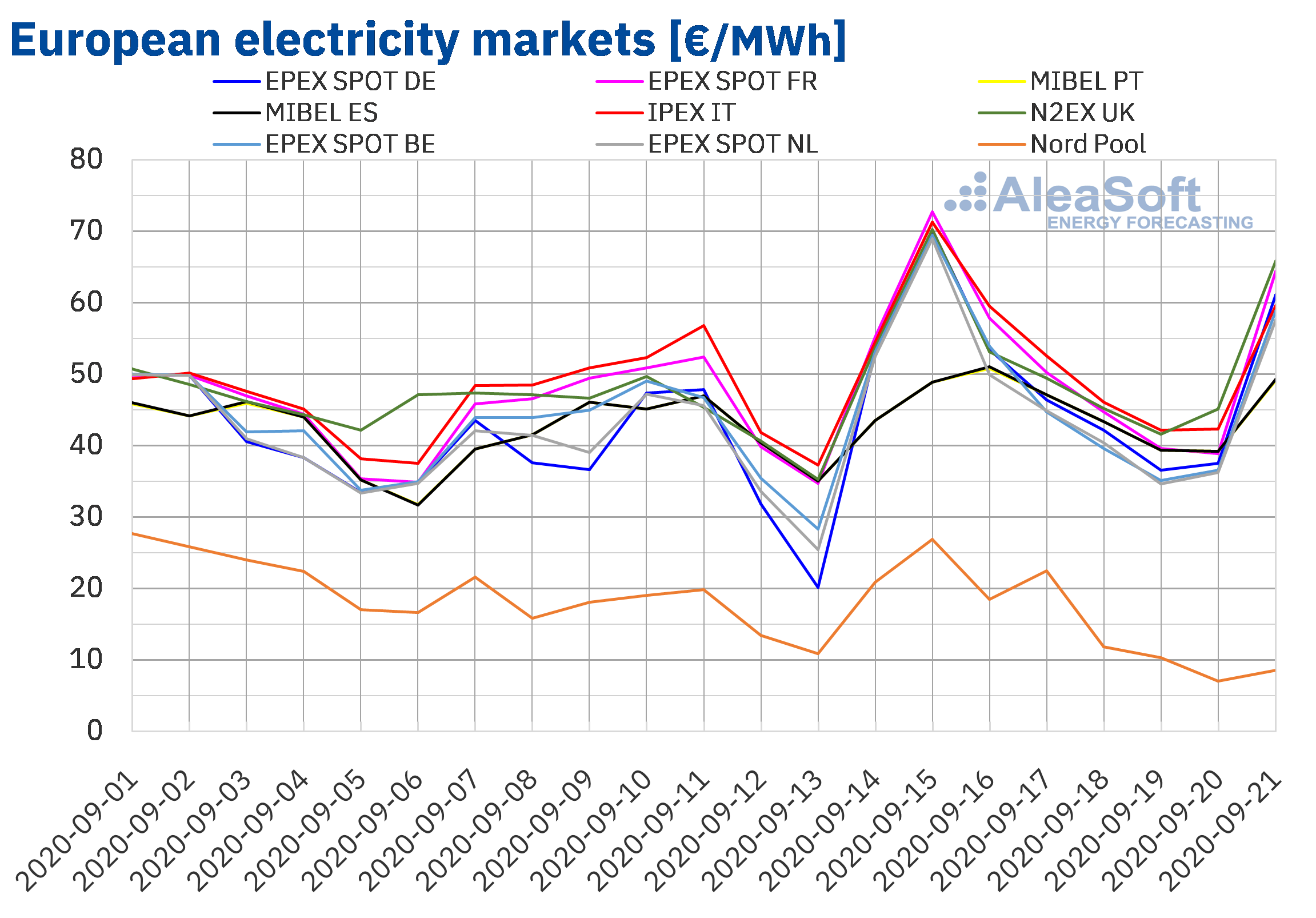 The price increases of the third week of September were influenced by an increase in demand in most markets. The decline in wind energy production in the markets of Germany and Spain and in solar energy production in the French, Iberian and Italian markets also exerted an upward influence on prices. In addition, the gas prices recovered in the first days of the week and the CO2 prices remained high, also contributing to the rise in prices in the European electricity markets.

The AleaSoft‘s price forecasting indicates that in the week of September 21 there will be a decrease in prices in most of the analysed European electricity markets. The decline will be influenced by increased wind energy production and lower demand in most markets. However, in the British market, where an increase in demand is expected, the prices could rise.

The week of September 14 ended with a heterogeneous behaviour in the main European electricity futures markets. For the Q4‑20 product, the EEX market of Germany, Italy and Great Britain and the ICE market of Great Britain and the Netherlands registered price increases compared to the previous week. While the EEX market of France and Spain, the OMIP market of Spain and Portugal, the ICE market of Belgium and the Nordic countries, as well as the NASDAQ market of the Nordic countries ended the session of September 18 with a lower settlement price than that of the September 11 session. The greatest variation was registered in the Nordic countries, with a decrease of 22% in both ICE and NASDAQ. On this occasion, these markets presented the largest drop in absolute terms, of almost €6/MWh.

In the case of the electricity futures for 2021, the behaviour was not so uneven. The Nordic countries, in the ICE and NASDAQ markets, registered price drops close to 10%, while in the rest of the markets the prices rose. The price increase for this product was between 0.9% of the EEX market of France and 2.2% of the ICE market of the Netherlands.

The Brent oil futures prices for the month of November 2020 in the ICE market, in the third week of September, exceeded $40/bbl again. The prices rose until reaching a settlement price of $43.30/bbl on Thursday, September 17. This price was 8.1% higher than that of the previous Thursday and the highest in the last two weeks. On Friday, the price fell 0.3% to $43.15/bbl, but it was still 8.3% higher than that of the previous Friday.

The week of September 14, the production cuts in the Gulf of Mexico due to the Tropical Storm Sally favoured the price recovery. However, in the coming days, the concerns about the advance of the coronavirus pandemic and its effects on the demand will continue to influence the prices. In addition, the recovery of the production and exports from Libya could contribute to a decline in prices. Although, for the moment, the production cuts continue in the Gulf of Mexico, now due to the Tropical Storm Beta.

As for the TTF gas futures prices in the ICE market for the month of October 2020, the third week of September had a generally upward trend, although on September 17 they fell by 1.7%. The maximum settlement price of the week, of €11.47/MWh, was reached on Friday, September 18. This value was 9.3% higher than that of the previous Friday and the highest in the last two weeks.

On the other hand, the API 2 coal futures prices in the ICE market for the month of October 2020, during the week that began on Monday, September 14, remained above $53/t. The maximum settlement price of the week, of $53.90/t, was reached on Wednesday, September 16. This price was 3.2% higher than that of the previous Wednesday and the highest since the beginning of August. 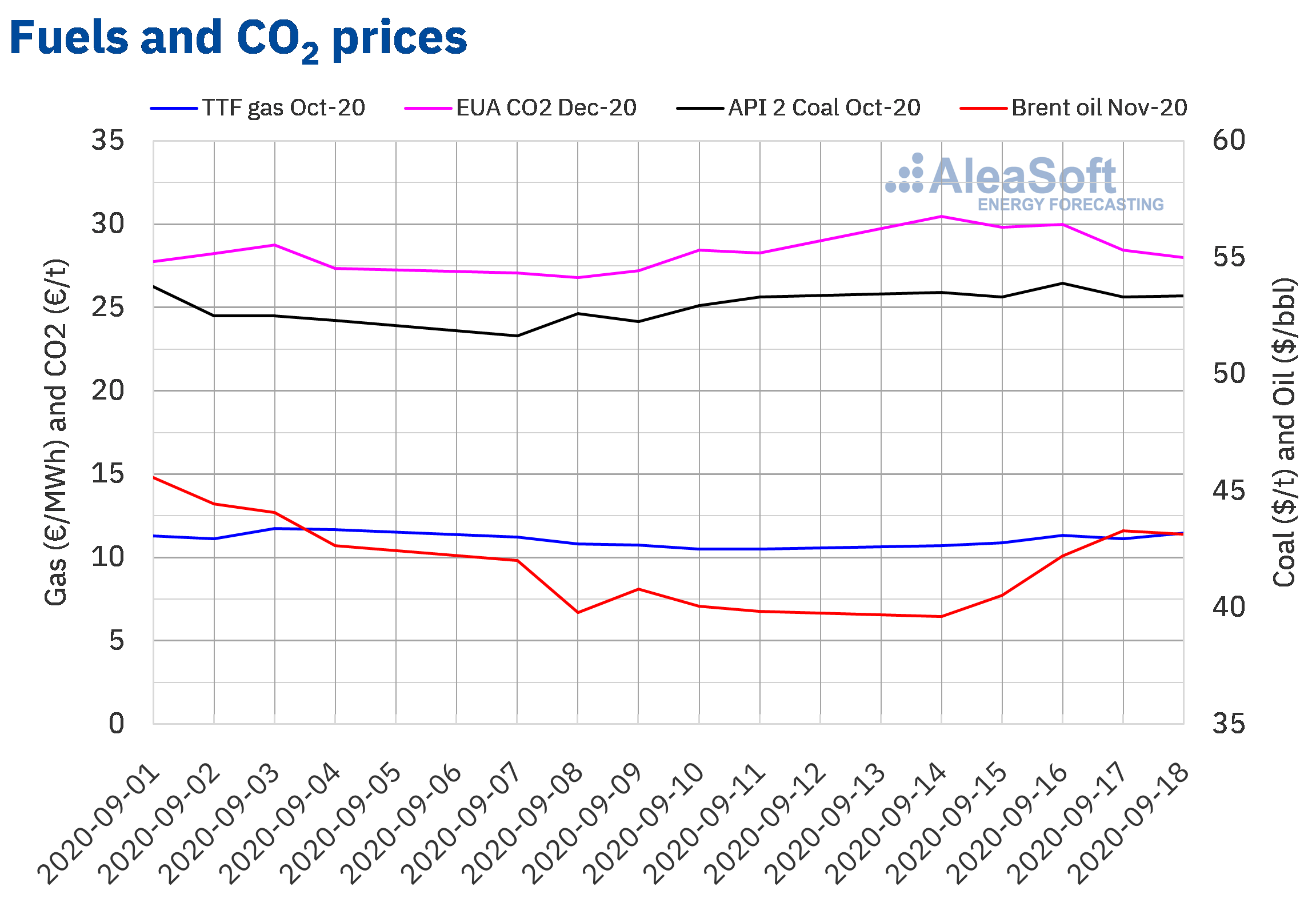 After the great success of attendance at the first part of the webinar “Energy markets in the recovery from the economic crisis” that took place on September 17, at AleaSoft the second part of it was already begun to organise, to be held on October 29 and in which the topics addressed in the first part will continue to be deepened. In this first part, the speakers Oriol Saltó, Manager of Data Analysis and Modelling at AleaSoft, Daniel Fernández Alonso, Head of Energy Management at ENGIE Spain, and Roger Font, Projects, Assets and Specialised Businesses Global Manager at Banco Sabadell described the mood among the developers and funders of renewable energy projects in Spain and in Europe in general as of joy and optimism. They also pointed out that the electricity demand and the energy markets prices recovered rapidly once the most critical stage of the COVID‑19 crisis passed. The October meeting will be attended by two invited speakers from the consulting firm Deloitte: Pablo Castillo Lekuona, Senior Manager of Global IFRS & Offerings Services, and Carlos Milans del Bosch, Partner of Financial Advisory.

At AleaSoft, the mid and long‑term prices curves of the main European electricity markets are periodically updated, taking into account the evolution of the economy and the exit scenarios from the economic crisis.

At AleaSoft, the observatories were enabled to periodically monitor the main European electricity, Brent, gas, coal and CO2 markets. This tool includes charts of the main variables of these markets with daily updated information.