AleaSoft, December 10, 2020. In the second week of December, some European electricity markets set hourly or daily price records driven by the low temperatures that caused the increase in demand, surpassing the records reached during the first days of the month. The Brent, gas, coal and CO2 futures prices are among the highest since the first wave of the COVID 19 began in Europe, also favouring the increase in prices.

During the first days of the second week of December, the prices of most of the European electricity markets increased, in some cases surpassing the daily price records reached during the first days of the month. In the EPEX SPOT markets of Germany, France, Belgium and the Netherlands and in the N2EX market of Great Britain, the average price of December 9 was the highest in 2020, taking into account the information available until December 10. In all these cases, the prices of that day exceeded €75/MWh.
In many of these markets, the prices exceeded €100/MWh at various hours of the week that began on December 7, and in N2EX a price of €247.55/MWh was reached between 6:00 p.m. and 7:00 p.m. CET of December 9.
It is also noteworthy that the Nord Pool market of the Nordic countries registered the two hours with the highest prices of 2020 on December 10. Between 4:00 p.m. and 5:00 p.m. CET of that day, the price was €46.12/MWh, and between 5:00 p.m. and 6:00 p.m. CET, €46.09/MWh.
The drop in temperatures on the continent caused an increase in demand in almost all markets, which boosted the electricity markets prices. The fact that the renewable energy production was lower in general and that the fuels, Brent and CO2 prices are among the highest since the first wave of the pandemic began in Europe are other factors that favoured the rise in prices. Another element to consider is the 24 hour strike of the workers of the electricity generation sector in France, which affected the production in that country since December 9.
However, in the MIBEL market of Spain and Portugal, the average of the prices of the first four days of the second week of December was 22% lower than that of the same days of the previous week. In fact, the price registered between 3:00 and 4:00 CET of December 8 is the third lowest of the year so far, €1.95/MWh. In the IPEX market of Italy there was practically no variation in prices. In these two markets, the demand was lower and the wind energy production higher during the analysed period. 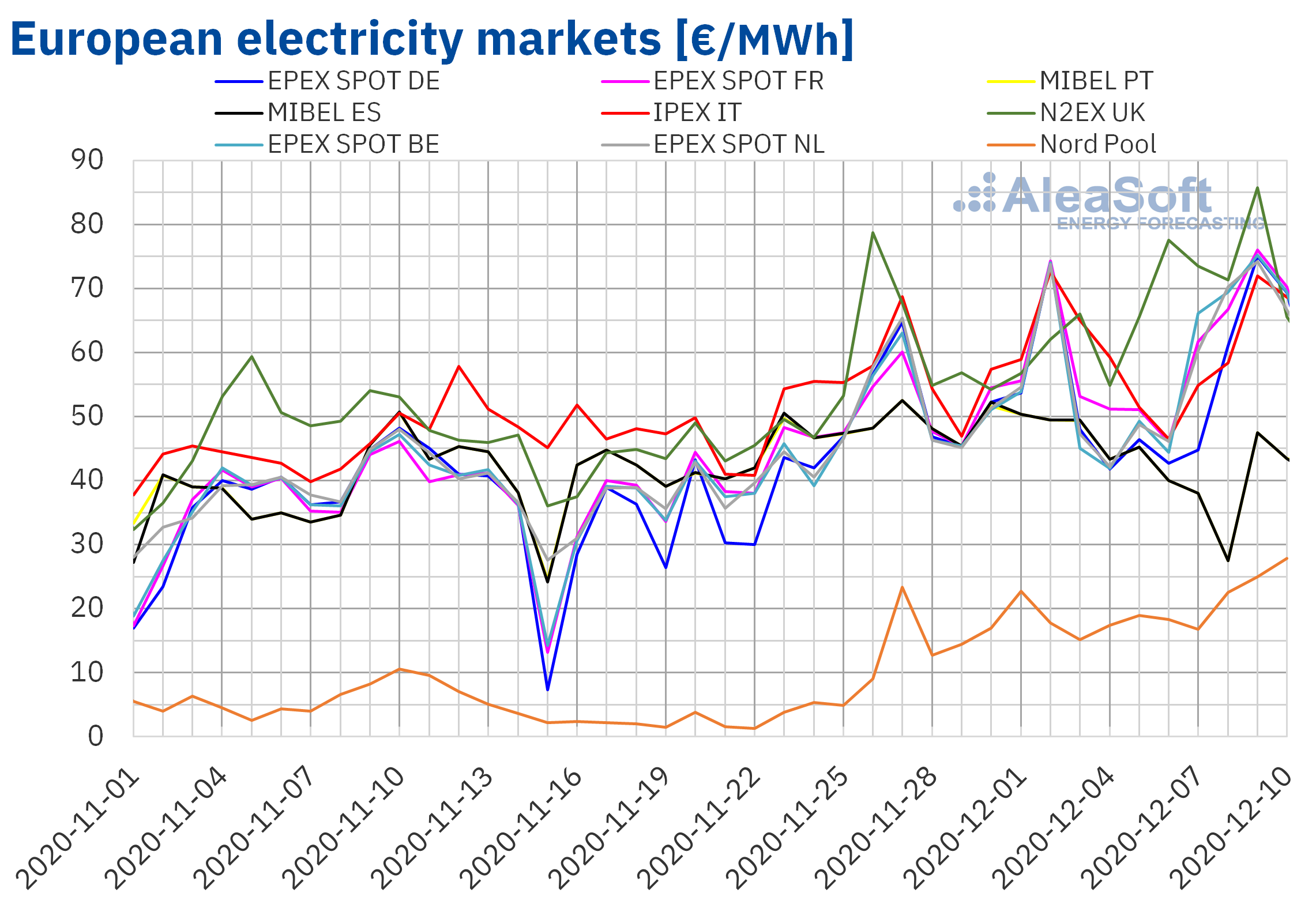 In most European markets, the electricity demand increased between December 7 and 9, favoured by the drop in temperatures. Decreases were only registered in Spain and Italy, in which the Immaculate Conception holiday was celebrated on December 8, in addition to a slight drop in Germany where the temperatures recovered compared to those of the previous week. 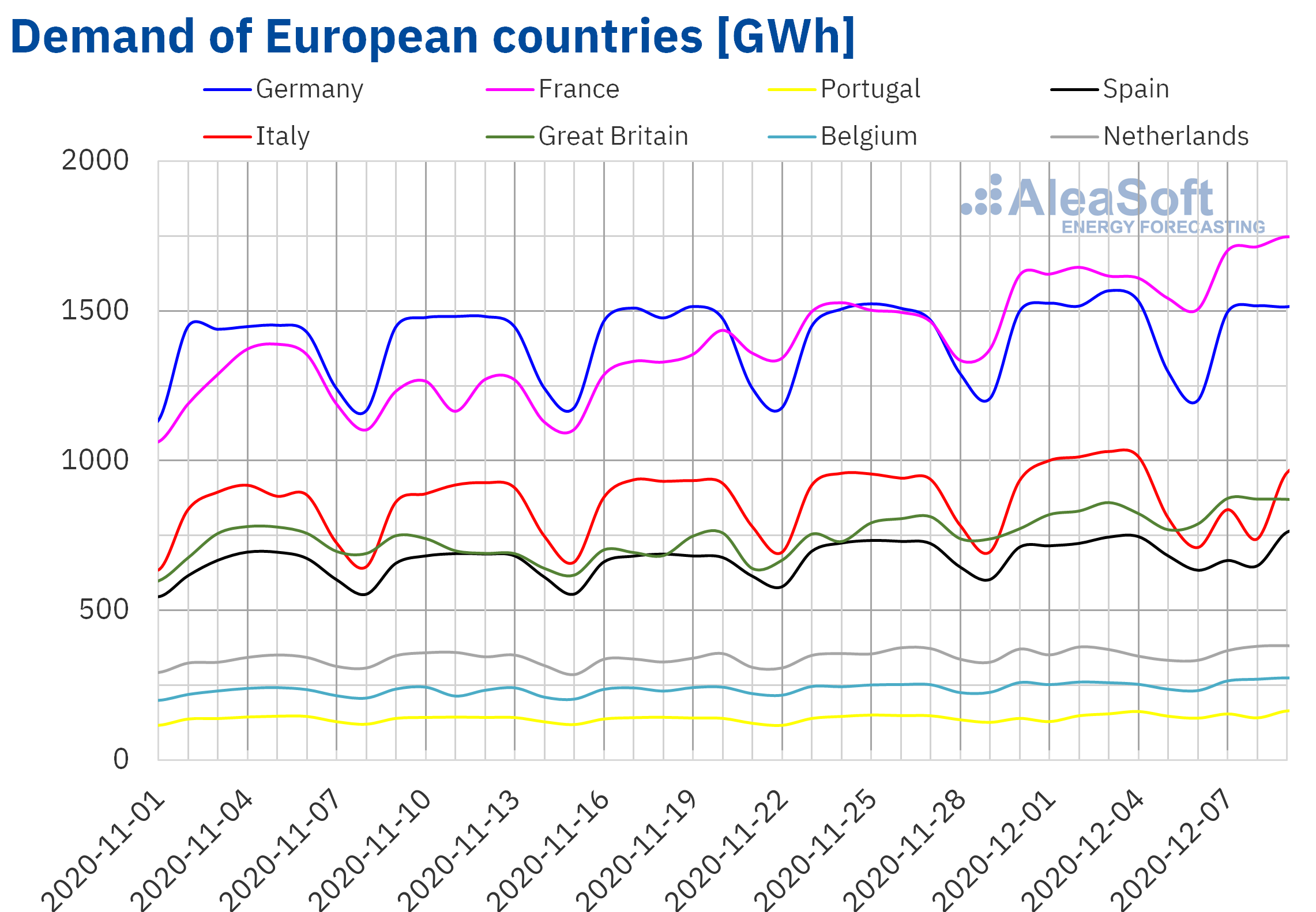 In the Brent, fuels and CO2 futures markets, during the first days of the week the prices were stable in general, with values that are among the highest since March 2020 when the first wave of COVID 19 began.
The Brent oil futures for February 2021 in the ICE market were above $48/bbl after the highest value since the beginning of March, of $49.25/bbl, was registered last Friday, December 4.
Following the start of the distribution of the Pfizer BioNtech vaccine against COVID 19 in the United Kingdom, the optimism about the contribution of the vaccines to the recovery in demand is favouring the increase in Brent oil futures prices. On the other hand, the news about the explosions in two oil wells in Iraq on December 9 may also exert an upward influence on the prices. Despite the fact that the wells were small and their fire had no consequences on the production levels, these explosions raise concerns about the possibility of new attacks at a time when the withdrawal of US soldiers from the country was announced.
On the other hand, the EIA data show that last week there was a significant increase in US crude reserves, as well as in gasoline and distillate stocks. In the case of the crude oil, the weekly rise was the highest since April. In addition, the evolution of the coronavirus pandemic is worsening in the United States.
Regarding the production, the OPEC+ agreed to start to increase the supply levels in January by 0.5 million barrels a day, assuming that the demand will gradually recover. Libya’s production also continues to recover.
The TTF gas futures for January 2021, also in the ICE market, continued above €14/MWh.
The API 2 coal futures for January 2021 in the ICE market continued with the upward trend that began in mid November, reaching a settlement price of $64.20/t in the December 9 session. This is the highest value registered since the end of December 2019.
The settlement prices of the CO2 emission rights futures for December 2020 in the EEX market were above €29/t after reaching the second highest value of the year, of €30.11/t, on December 4. 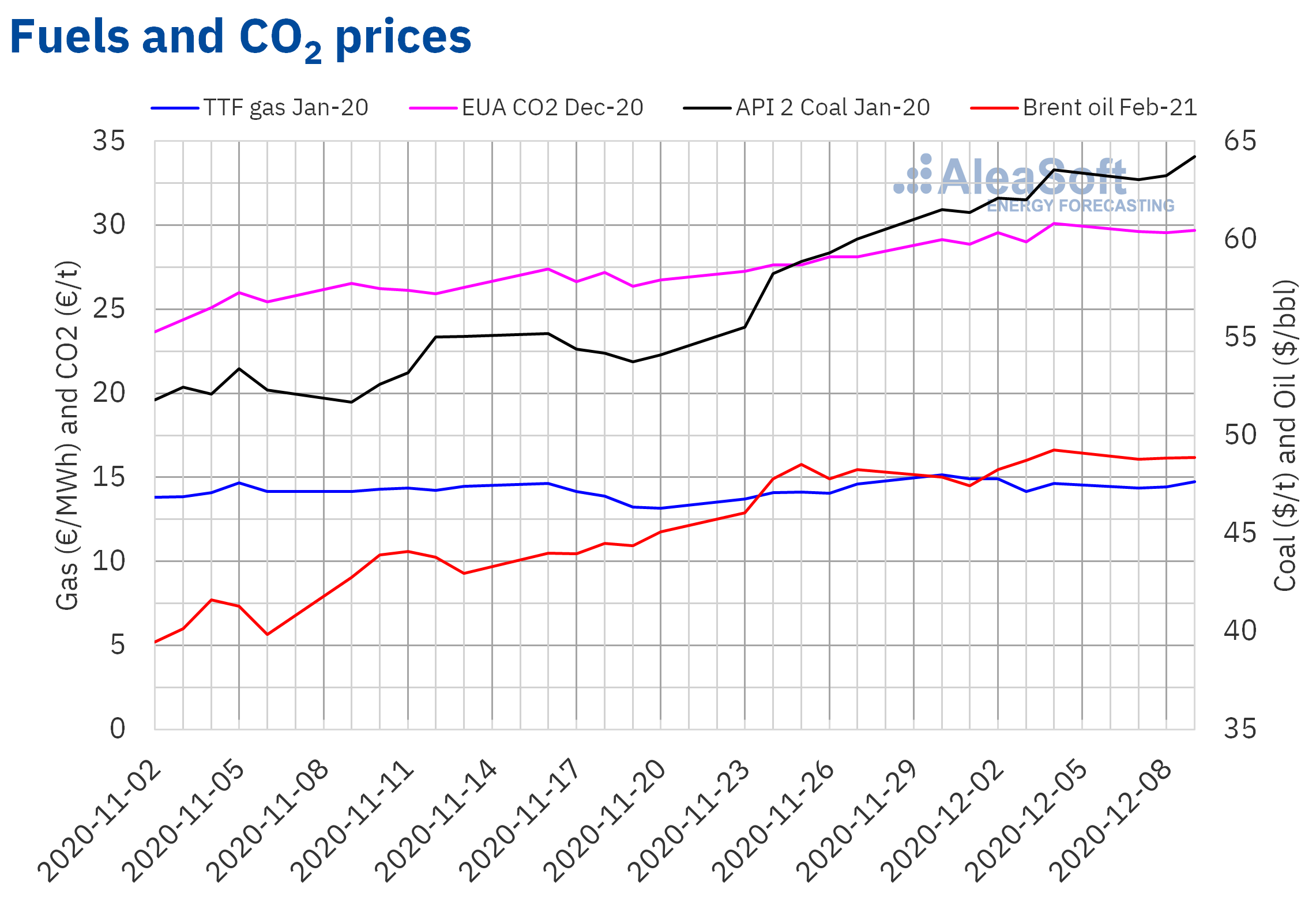 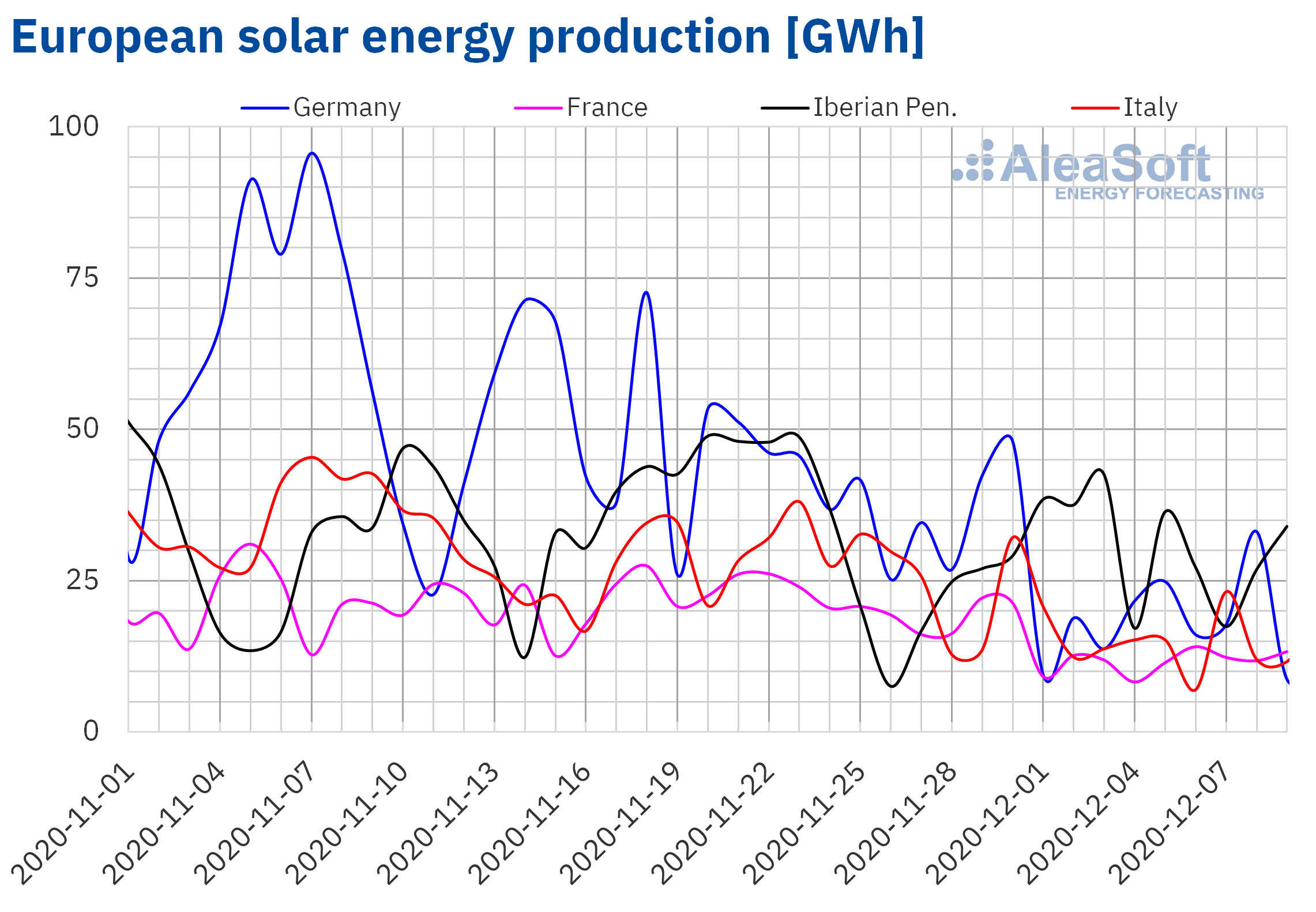 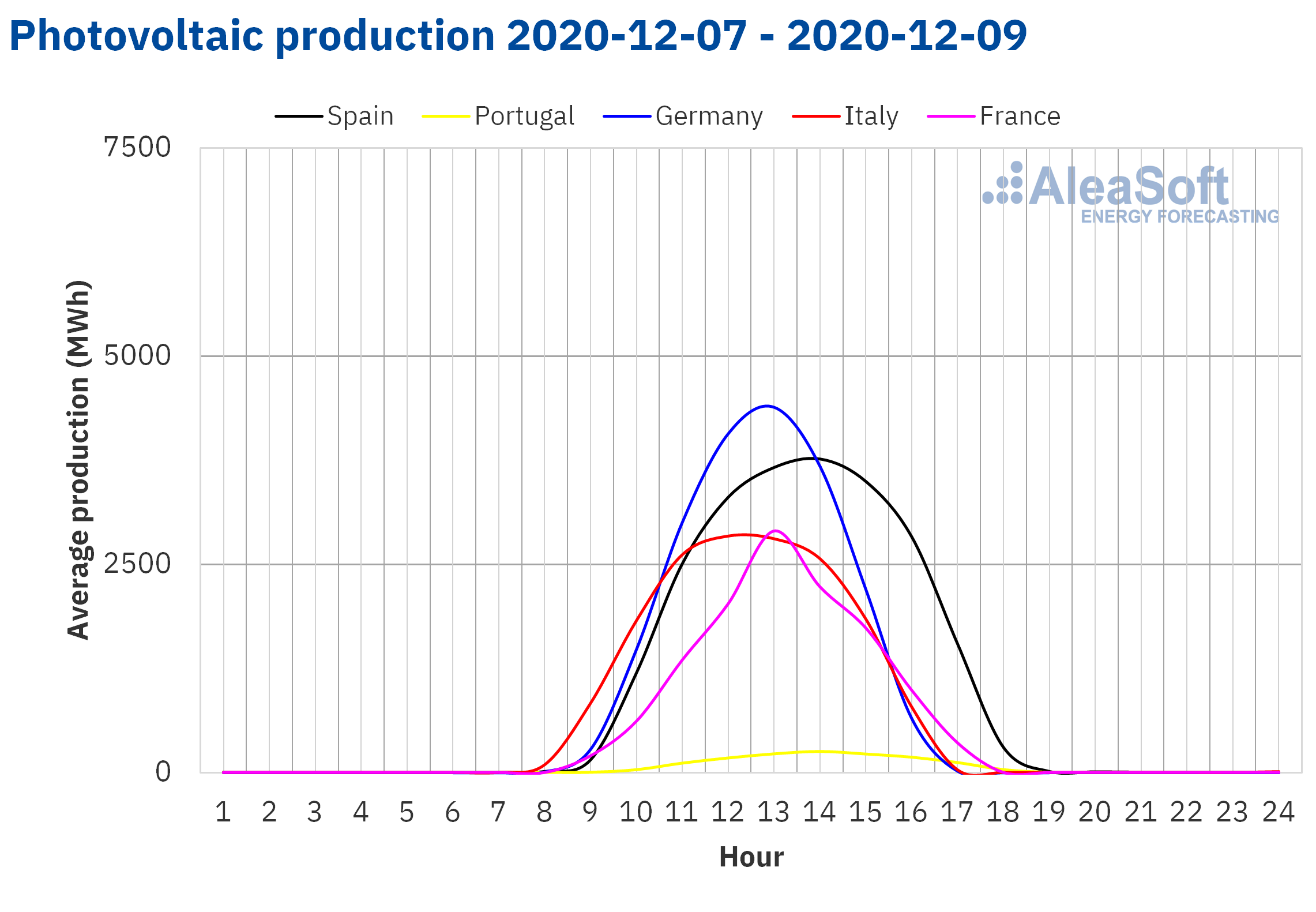 In the Iberian Peninsula, the wind energy production increased by 40% during the first three days of the week of December 7 compared to the average of the previous week. It also increased in the Italian market. However, in the German and French markets, the production with this technology decreased. 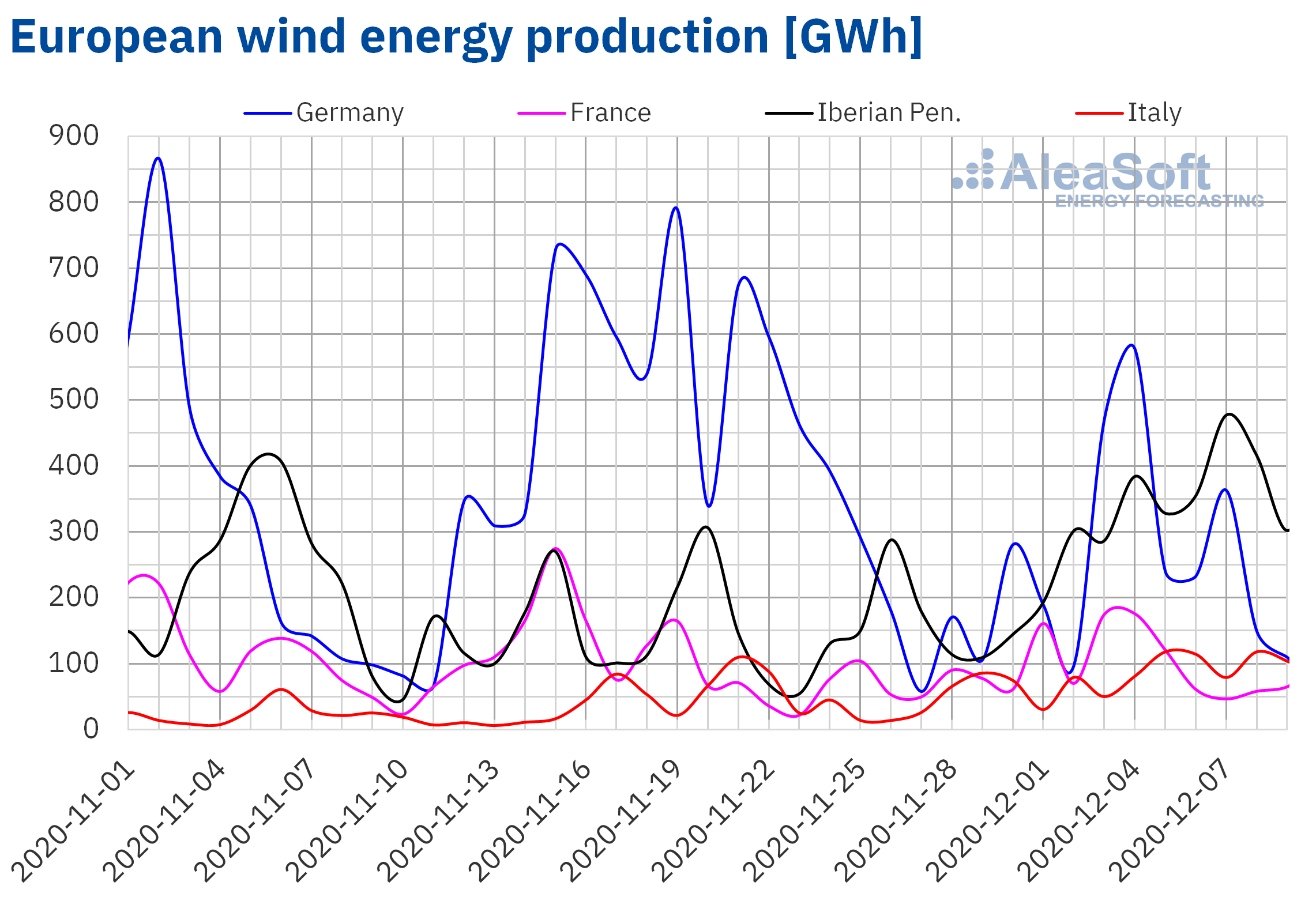 In the electricity futures markets there is no homogeneity if the settlement prices of the session of December 9 are compared with those of the session of the 4th of the same month. In the case of the futures for the first quarter of 2021, the prices of most markets fell, except for those of the Nordic countries, both in the NASDAQ market and the ICE market, and those of the EEX market of Italy. In the case of the futures for the year 2021, the behaviour is reversed. The prices rose in most markets except those of the Nordic countries and Great Britain, both in ICE and EEX.

<>AleaSoft analysis of the evolution of the energy markets and prospects from 2021
At AleaSoft reports on the evolution of the energy markets are carried out, as well as reports on the prospects from 2021, both in the mid term and in the long term, in addition to a wide series of highly useful reports for the energy sector.
In addition, on January 14, the first webinar of the year 2021 will be held where, in addition to analysing the prospects from the year that begins, a vision will be given on various topics related to the PPA market for the consumers. Together with the AleaSoft speakers, PwC Spain speakers will participate.

PrevAnteriorThe 2020 records, for the good and for the bad
SiguienteAll colours of hydrogenNext
Menu
Facebook-f Twitter Linkedin Instagram