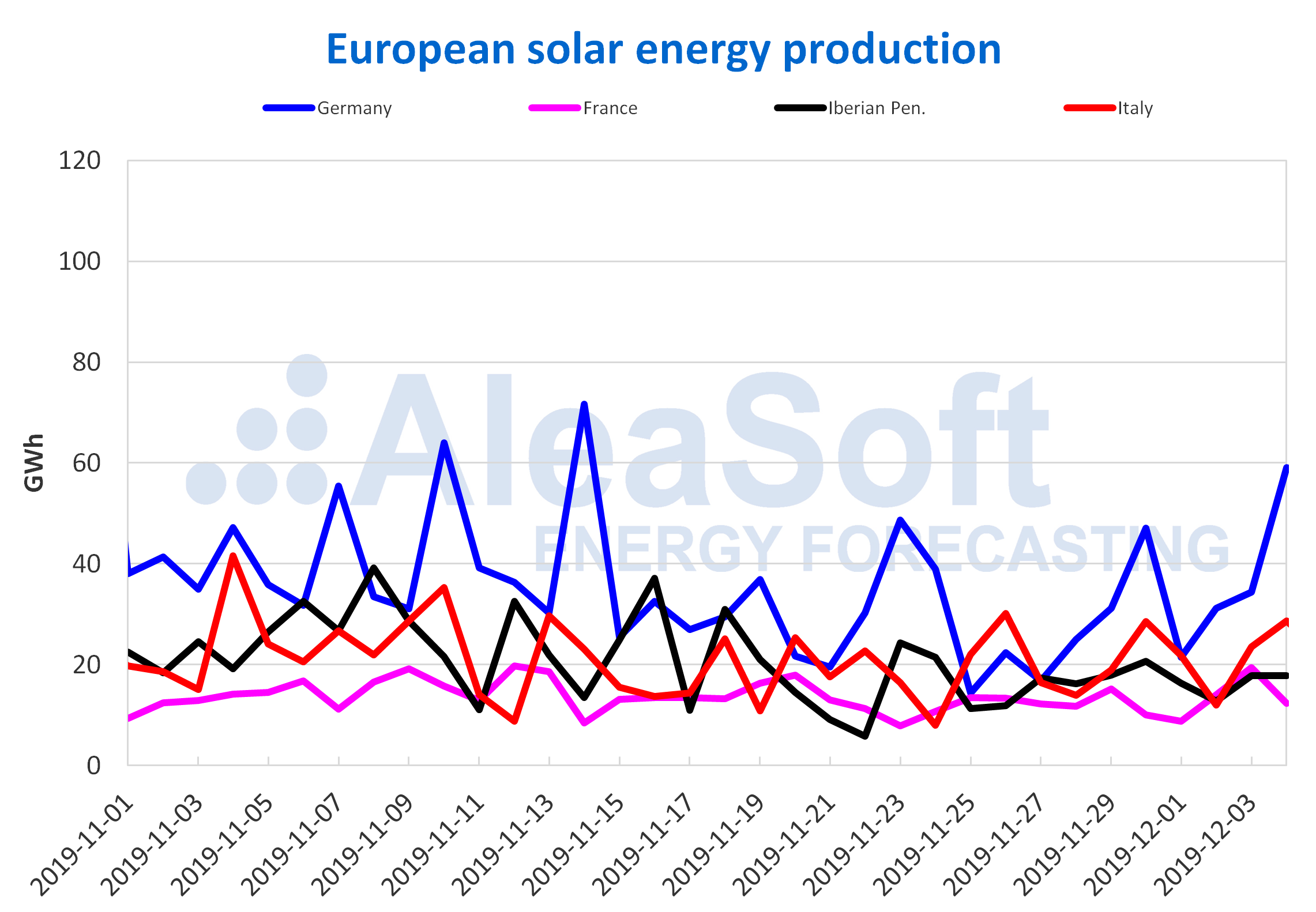 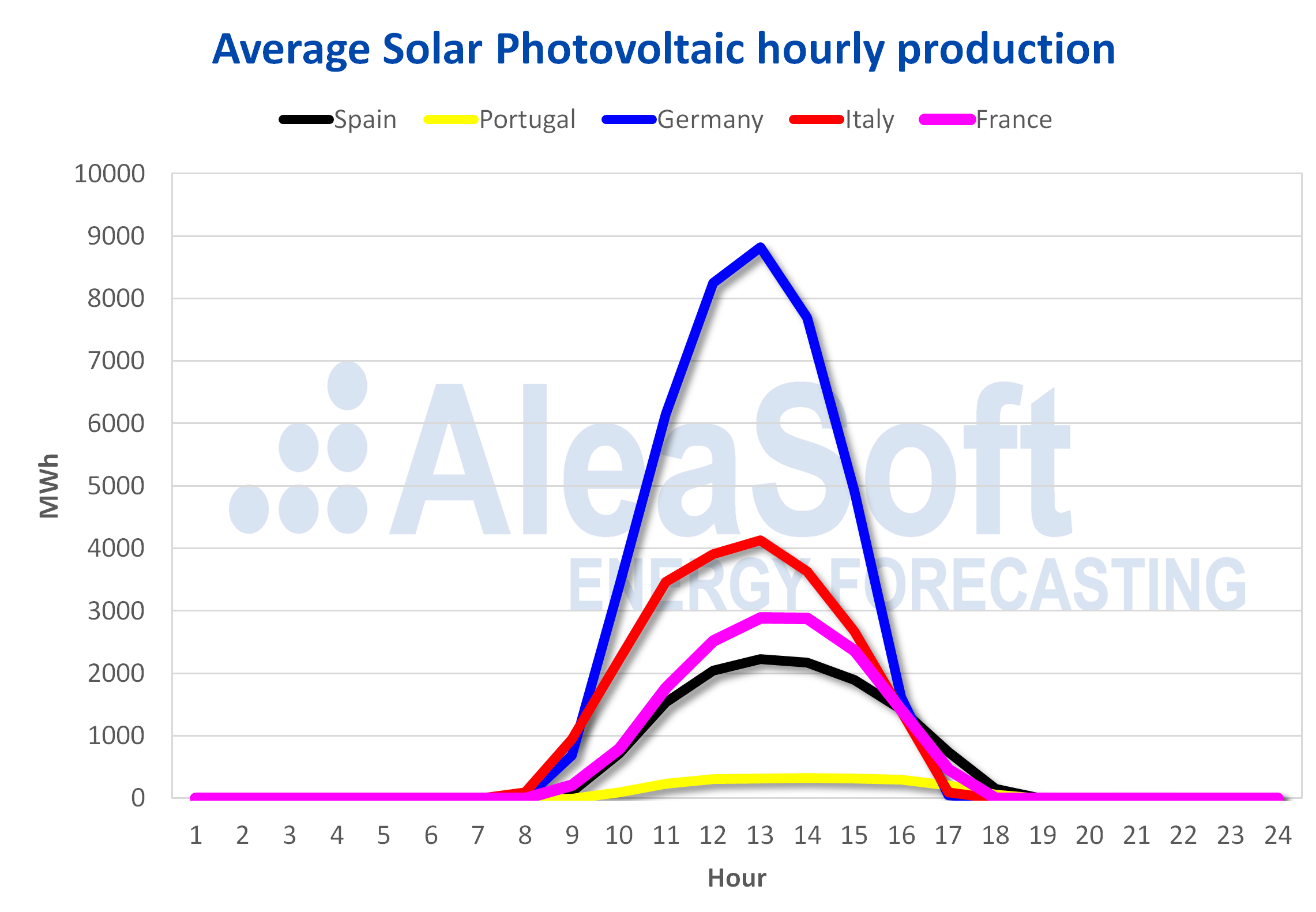 However, unlike solar energy production, wind energy production decreased so far this week compared to the average values of the last week of November in most European markets, with France leading the declines with a 51%. The Italian market is once again the exception, but in this case because its production increased by 28% in the analysed period. The total production of the current week is expected to remain lower than that of last week in most markets, including Italian, and that in Germany it will increase as a significant increase is expected over the weekend. 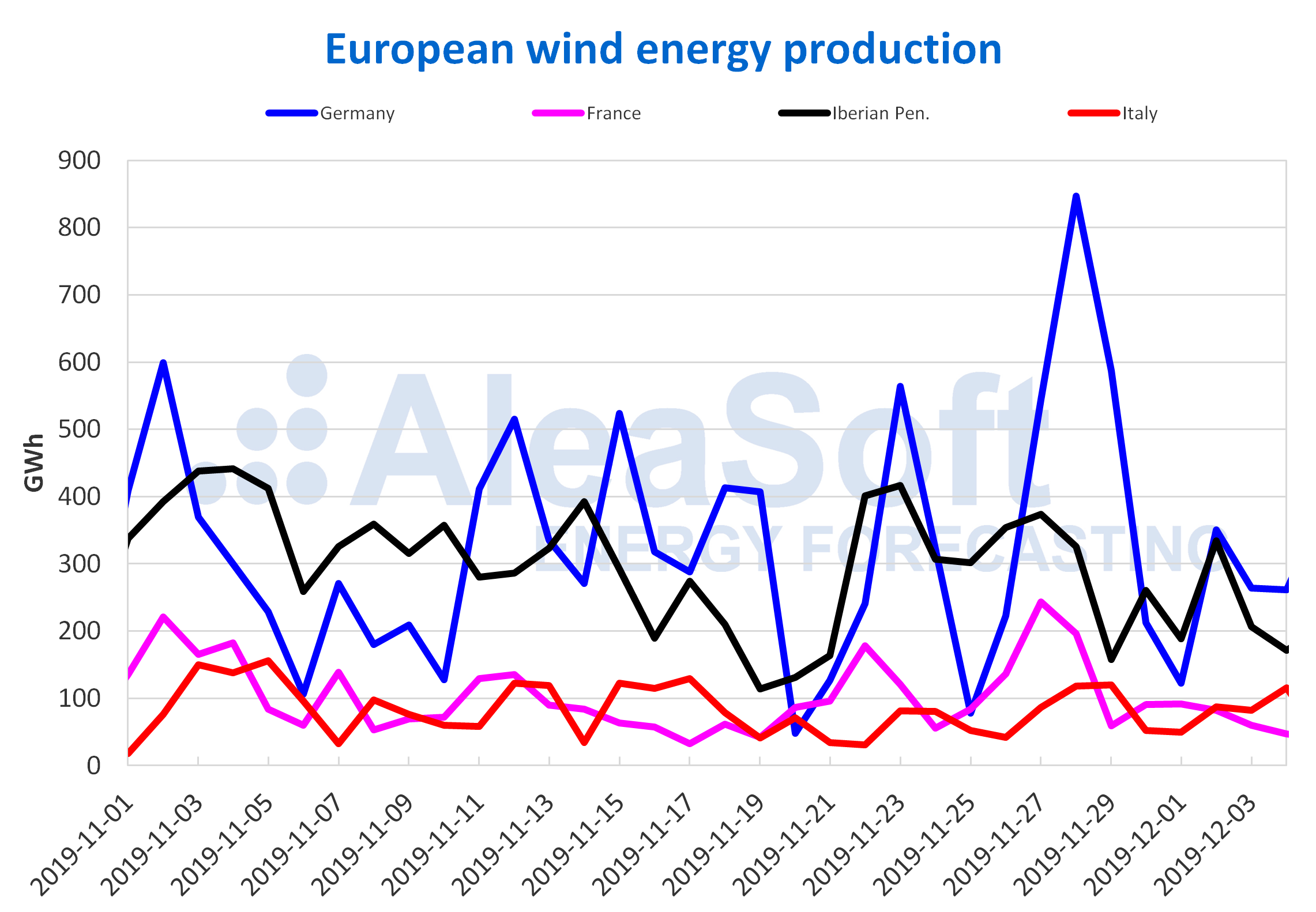 This week the temperatures fell again throughout the continent and this caused the increase in demand in most markets. France’s electricity demand rose by 18% in the first three days of the week compared to the same days of last week. However, despite the decrease in temperatures, the demand fell by 0.7% in Germany and in Portugal by 1.5%. Once this week is over, total demand is expected to be higher than last week in most markets, except in Germany where it will stay slightly below. 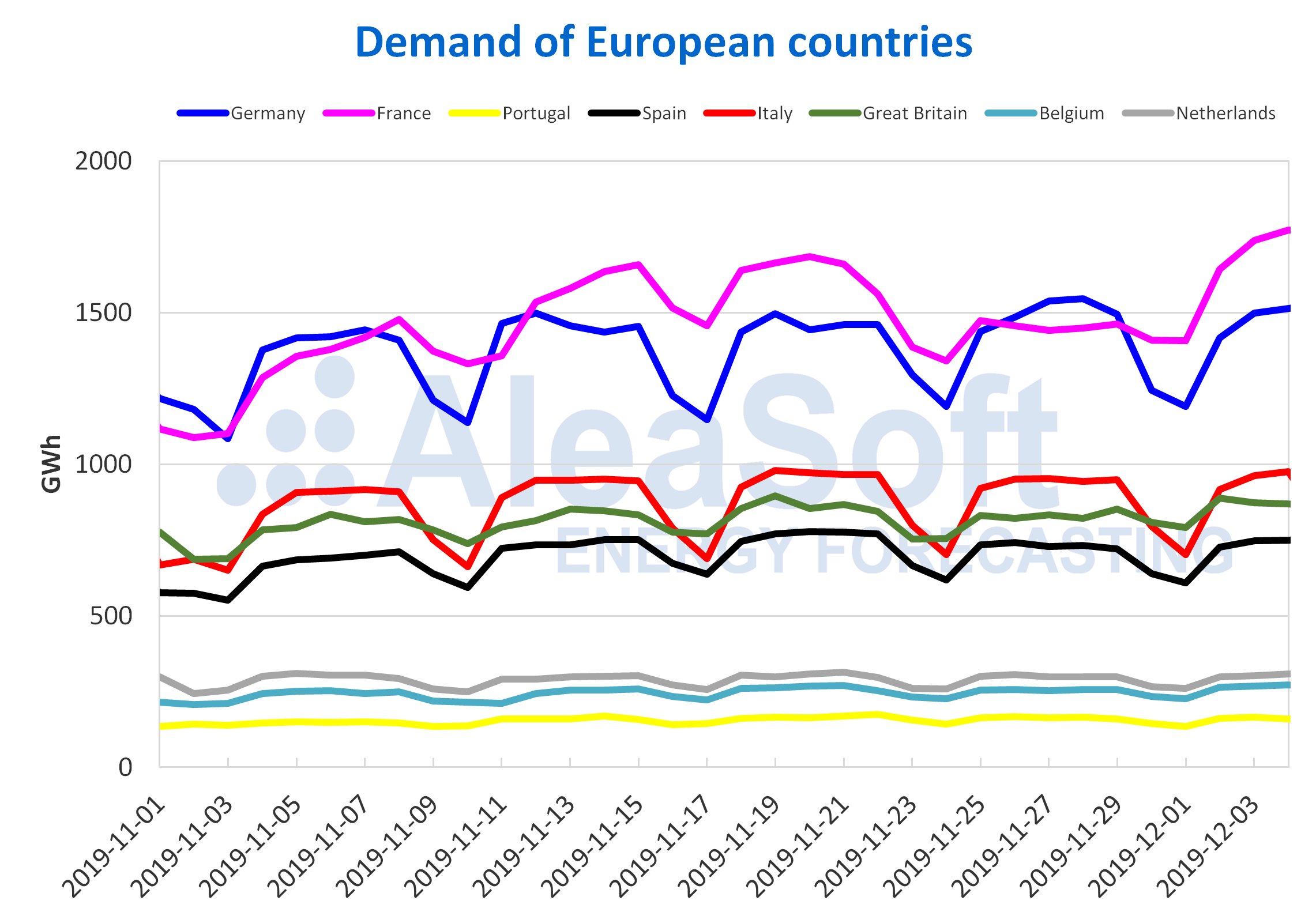 Solar energy production in mainland Spain, which includes both photovoltaic and solar thermal, increased by 14% during the first three days of this week compared to the same period of the previous week. At AleaSoft it is expected that production this week will end up being higher than last week.

Wind energy production this week until Wednesday, December 4, was 33% lower than last week in the period from Monday to Wednesday. At AleaSoft it is expected that production with this technology at the end of this week will remain lower.

The registered electricity demand during the first three days of this week was 0.9% higher than that registered in the same period last week. This variation is mainly due to the decrease in temperatures at the beginning of this week.

Nuclear energy production in Spain continues this week with values similar to those of last week. Currently, the Cofrentes and Vandellós nuclear power plants continue stopped for refuelling.

The hydroelectric reserves level is currently 10 121 GWh, which represents 836 GWh more than the previous week. The current reserves constitute 44% of the total capacity of 23 281 GWh, according to data from the latest Hydrological Bulletin of the Ministry for Ecological Transition.

So far this week, until Thursday, December 5, the electricity markets prices in Europe had a predominantly upward trend, especially in the westernmost part of the continent. Although this behaviour has not occurred every day or in all markets, the general result is that most European markets presented higher prices than those registered in the counterpart days of the last week of November 25.

This week‑on‑week rise was mainly due to the drop in temperatures, especially in countries where the demand for electricity is particularly sensitive to this variable, such as France. Today, December 5, the lowest price in Europe was reached by the Nord Pool market of the Nordic countries, with €37.71/MWh. On the other hand, the EPEX SPOT market of France had the highest price, with an average daily price of €57.83/MWh. The IPEX and EPEX SPOT markets of Italy and Belgium respectively, closely follow that price with €57.25/MWh and €56.25/MWh respectively. 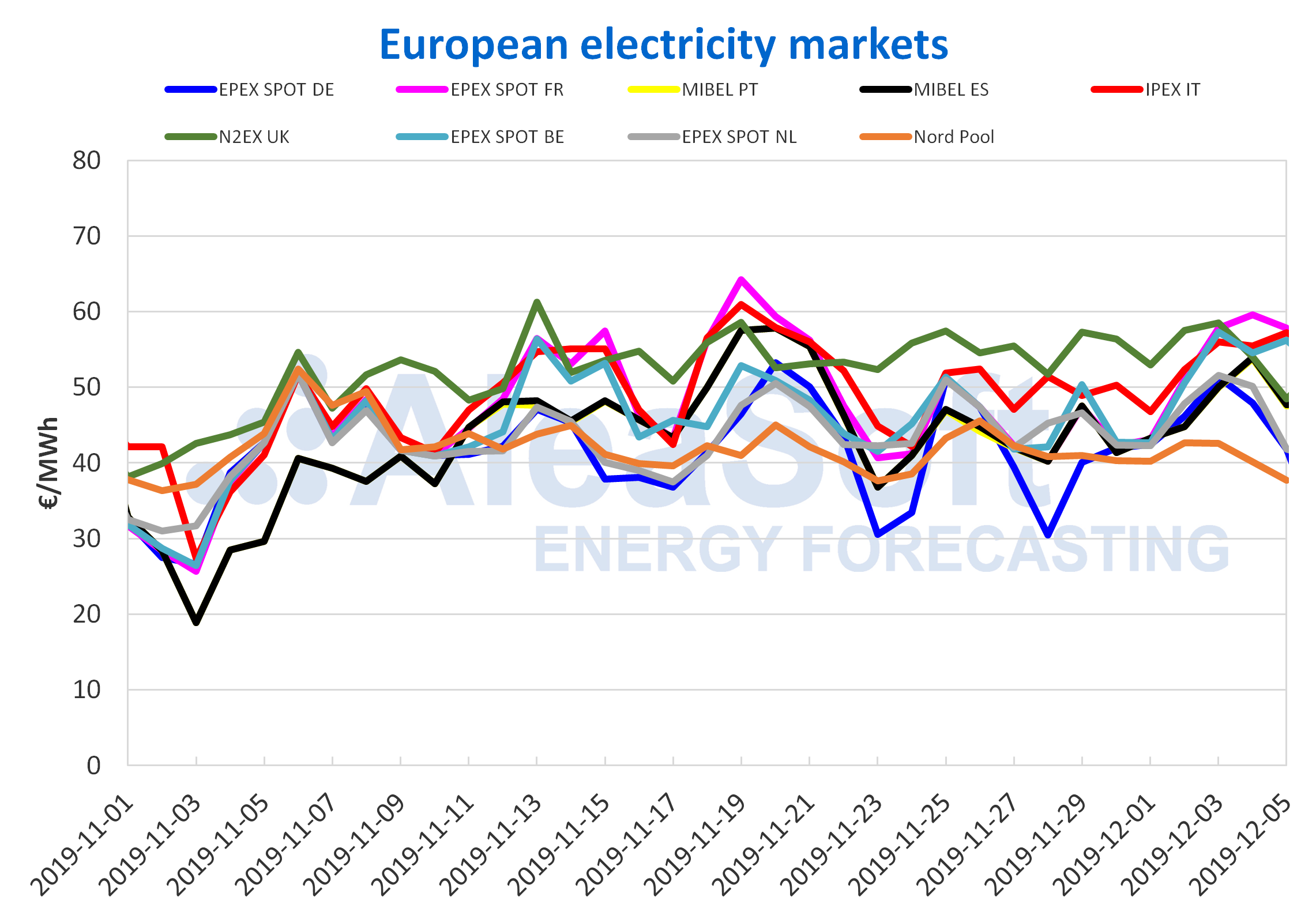 At AleaSoft it is expected that in the remaining days of this week the price of European markets will behave predominantly downward, although at the end of the week prices will continue to be higher than those of last week in almost all markets except in the Netherlands and Germany where high wind energy production is expected over the weekend.

The price of the MIBEL market had a decrease of €6.28/MWh in the price for today, December 5, of €47.67/MWh, after the previous days of the week rose every day. Compared to the first four days of the previous week of November 25, the average price between the second and fifth day of December, of €49.13/MWh, was 13% higher due mainly to lower temperatures and lower wind energy production.

Until Saturday, December 7, prices are expected to show little variation, even with the effect of the national holiday tomorrow, December 6, as it will be offset by a very low renewable energy production. On Sunday, December 8, prices will be lower due to the lower demand of that day. In this way, the week will conclude with an average price higher than the previous week.

The electricity futures prices for the first quarter of 2020 registered a marked fall so far this week. This drop was most noticeable in Western Europe. In the OMIP market, the prices of Portugal’s futures were reduced by 4.7%. Spain’s futures prices were reduced in the same market and in the EEX market by 5.0% and 4.9% respectively. France’s futures, which presented the most relevant decline, reduced their price by 5.8% in the EEX market, by settling on December 4 at €52.84/MWh. The prices reduction also extends, although with less intensity, to the Nordic countries, which in the last market session settled at €42.71/MWh in the ICE market and at €42.70/MWh in the NASDAQ market, representing in both cases a decrease of 2.4%.

As for the prices of electricity futures for next year 2020, the general behaviour was also downward, with less pronounced variations. In this case, the leader of the prices drops was the EEX market of Italy, with a 3.0% decrease. On the opposite side, the Nordic countries were again the ones with the least change, registering a decrease of 1.2% in the NASDAQ market. An interesting fact is that the 2020 futures prices of Spain and Portugal in the OMIP market in the session of yesterday, December 4, were different. This is something that had not happen since the session of September 18 of this year.

The prices of Brent oil futures for the month of February 2020 in the ICE market rose yesterday, Wednesday, December 4, to $63.00/bbl due to expectations before the meetings that OPEC members will hold today and tomorrow, in which they will decide if they maintain or even increase the cuts of the oil production, and by a fall in the inventories of crude oil of the United States. This 3.6% increase is the largest for this market since the attacks on Saudi oil facilities in September this year. The evolution of this market in the coming days will depend on the agreements reached at OPEC meetings as well as the progress of negotiations around the trade agreement between the United States and China.

The prices of TTF gas futures in the ICE market for the month of January 2020 stood below €16/MWh since the beginning of this week. The settlement price of Tuesday, December 3 was €15.77/MWh, 4.6% lower than the previous Tuesday and the lowest recorded in this market in the last two years. In the coming days, prices in this market are expected to remain at around €16/MWh.

The prices of API 2 coal futures in the ICE market for the month of January 2020 were settling below $59/t since Monday, December 2. On December 3 and 4 the settlement price was $58.00/t. In the coming days, prices are expected to remain stable. The prices of CO2 emission rights futures in the EEX market for the December 2020 reference contract rose by 3.1% yesterday Wednesday compared to the previous day after starting the week with a fall of 3.5% compared to Friday, November 29. The lowest settlement price this week was registered on Tuesday and was €24.15/t. 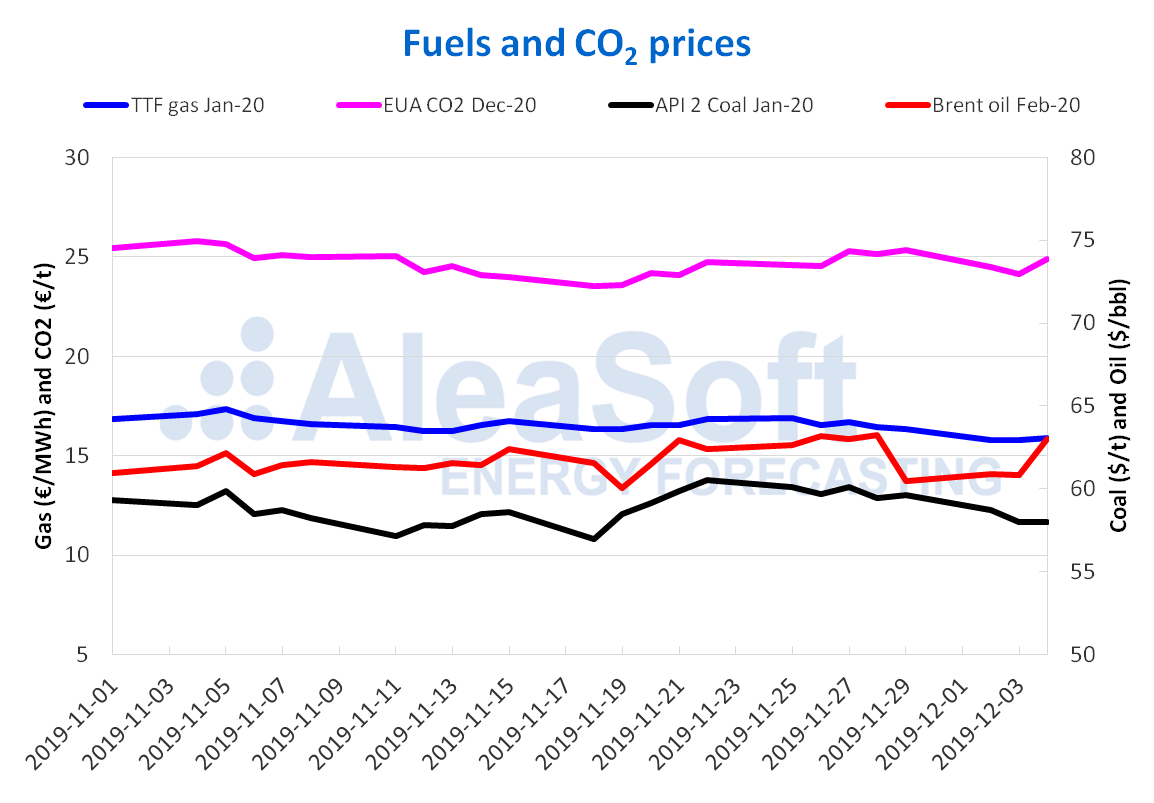