Last week of December 2, the solar energy production increased in most European markets compared to the last week of November. The most significant percentage growth was that of Portugal with 99%, but in absolute terms Germany was the market with the greatest growth, of 68.29 GWh, which translates into 38%. Italy was the only analysed market where the production decreased slightly, by 1.7%.

In the week that begins today, December 9, the solar energy production is expected to increase in Spain and Italy and to fall in Germany. 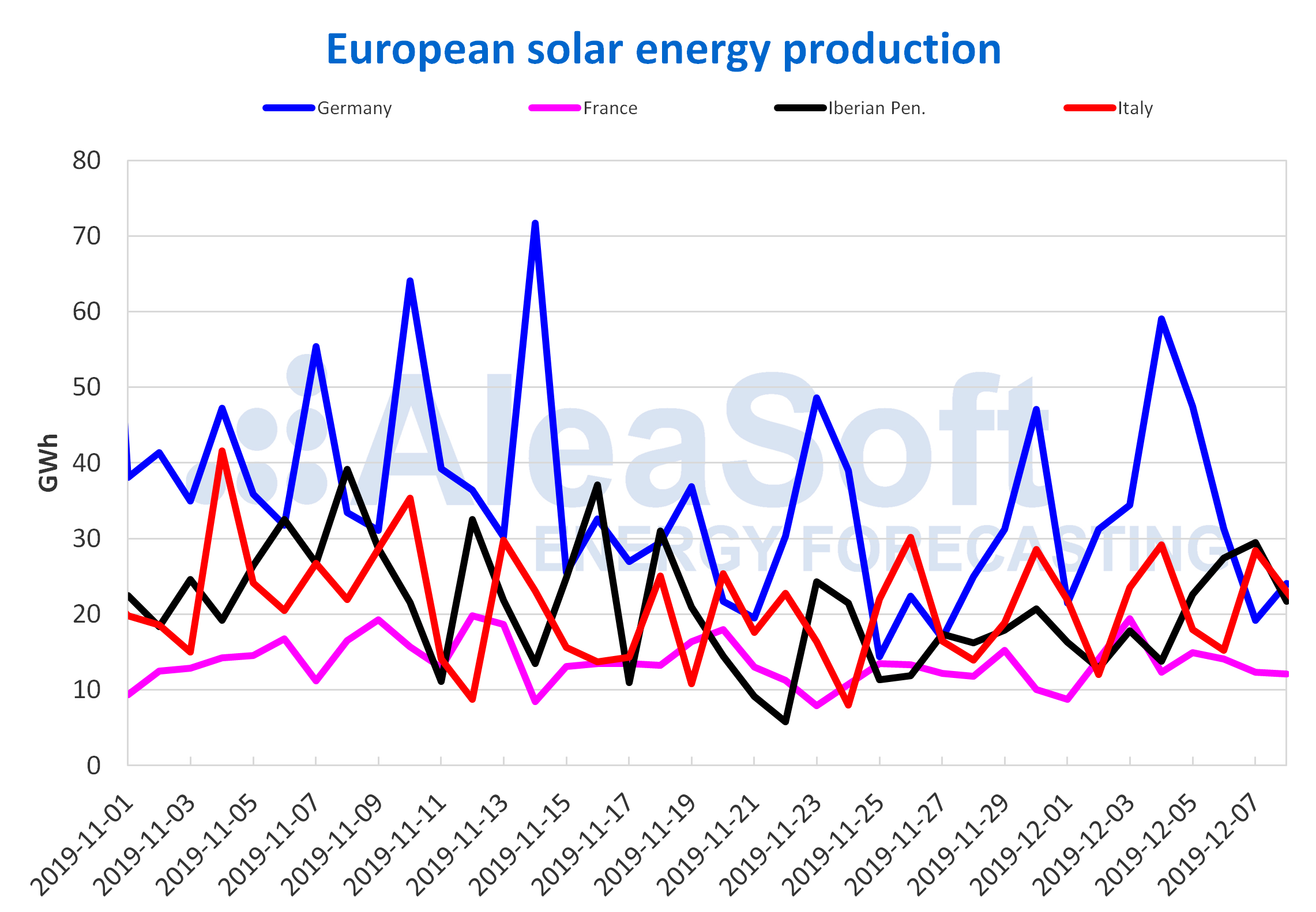 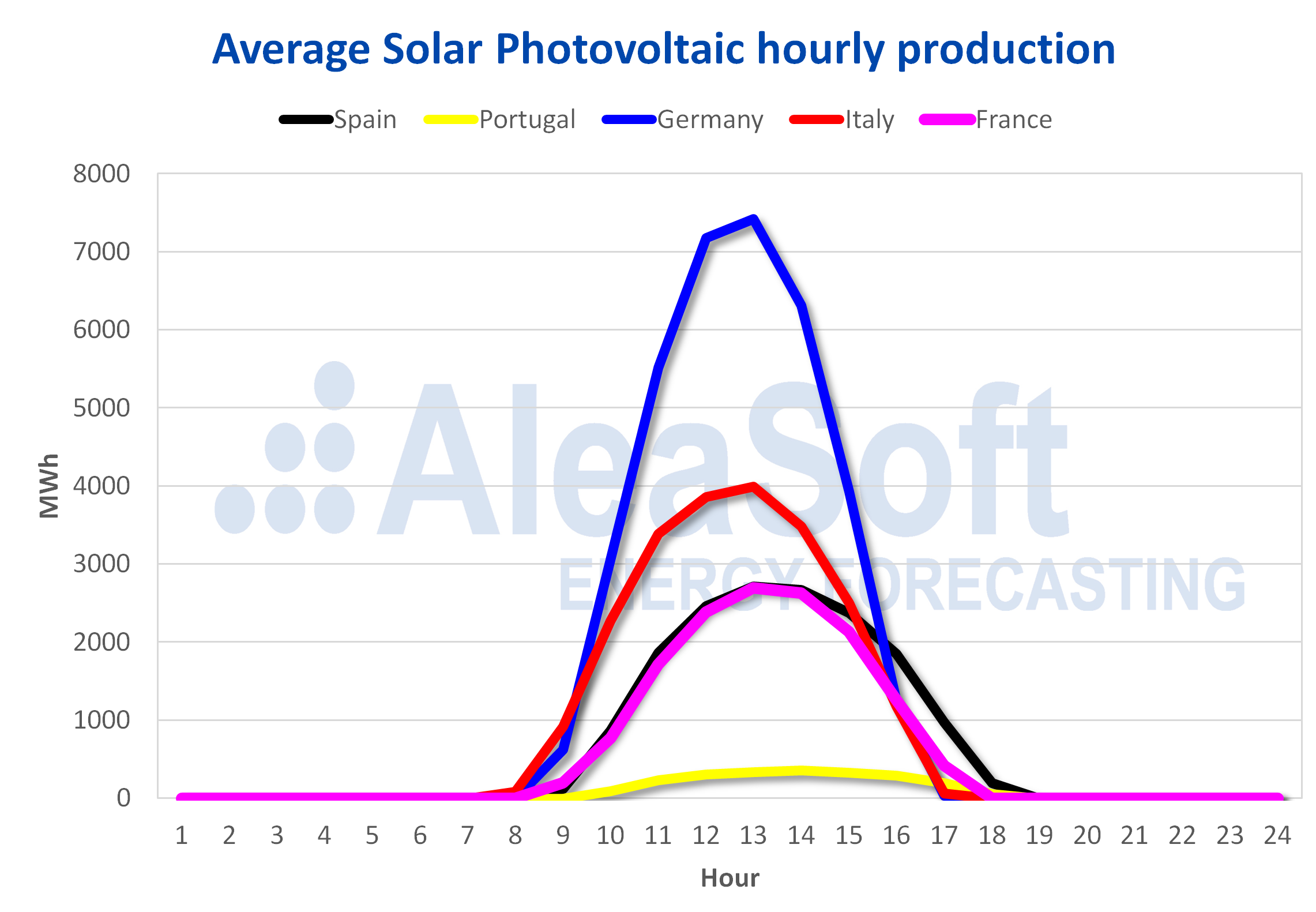 In the case of the wind energy production, last week there were week‑on‑week descents in much of the continent. The most important fall was that of the Iberian Peninsula, of 40%. However, in Germany the production increased by 48%, mainly due to the high production registered during the weekend that reached values that were not seen since March of this year. On Sunday, December 8, Germany’s solar energy production was 931 GWh, the fourth highest daily production in this year in that market.

Comparing the wind energy production of the first eight days of the month against the same days of December last year, the production rose in Italy and Portugal, the latter with the highest growth, of 40%, and fell in Spain, Germany and France, with the decline in the Gallic market being the most pronounced, of 36%.

At AleaSoft it is expected that this week the wind energy production will increase in all the analysed European markets. 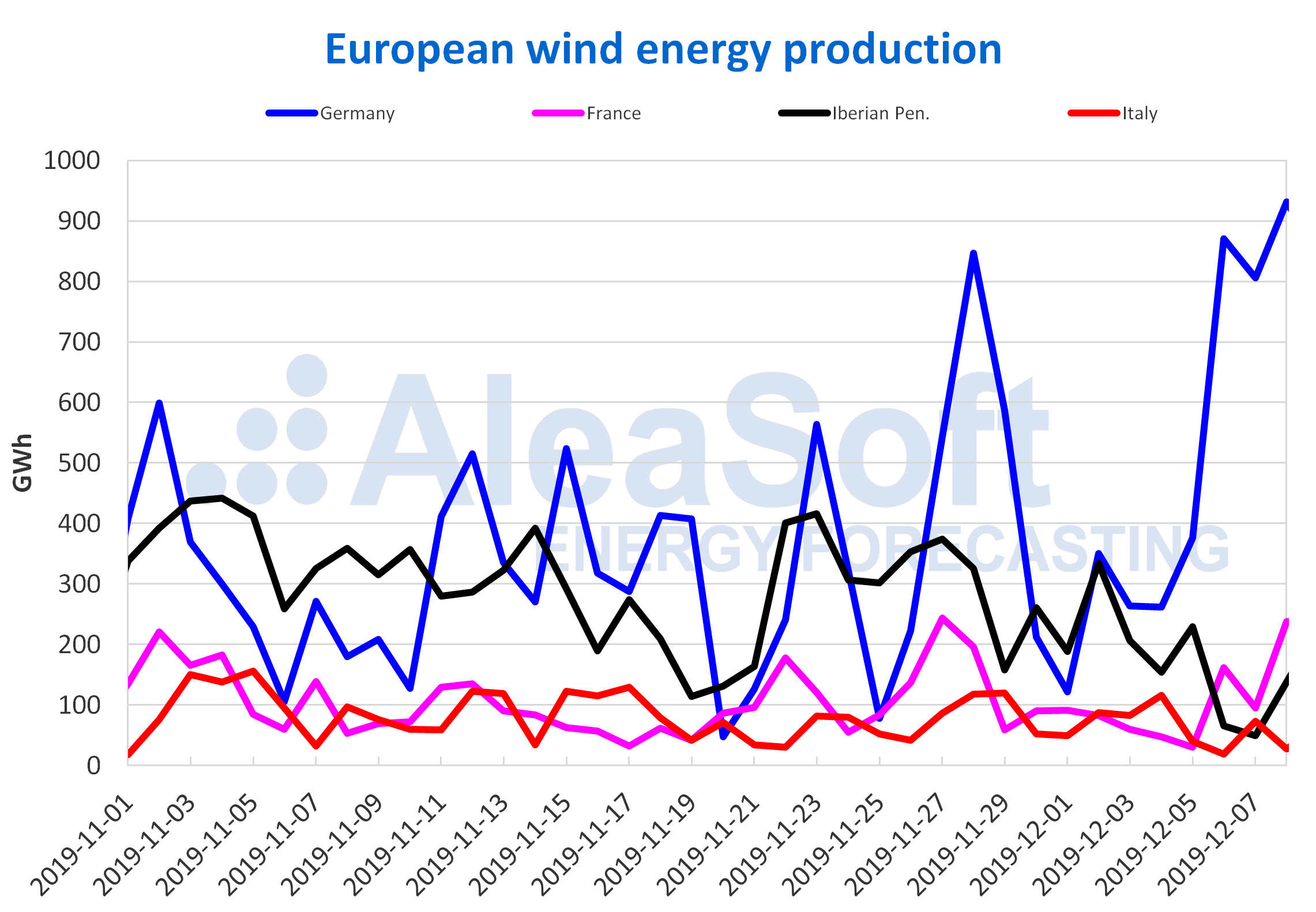 Last week temperatures dropped in most parts of the continent compared to those of the week of November 25. As a consequence, the electricity demand increased in almost all markets, with France leading the way with 13% growth. On the other hand, the temperature in Great Britain was slightly higher, favouring the decrease in demand, by 2.1%. In Spain, the electricity demand fell 0.5% due to the effect of the national holiday of December 6.

This week the demand is expected to increase in Germany, Spain, Portugal, Italy and the Netherlands compared to that of last week and decrease in France, Great Britain and Belgium. 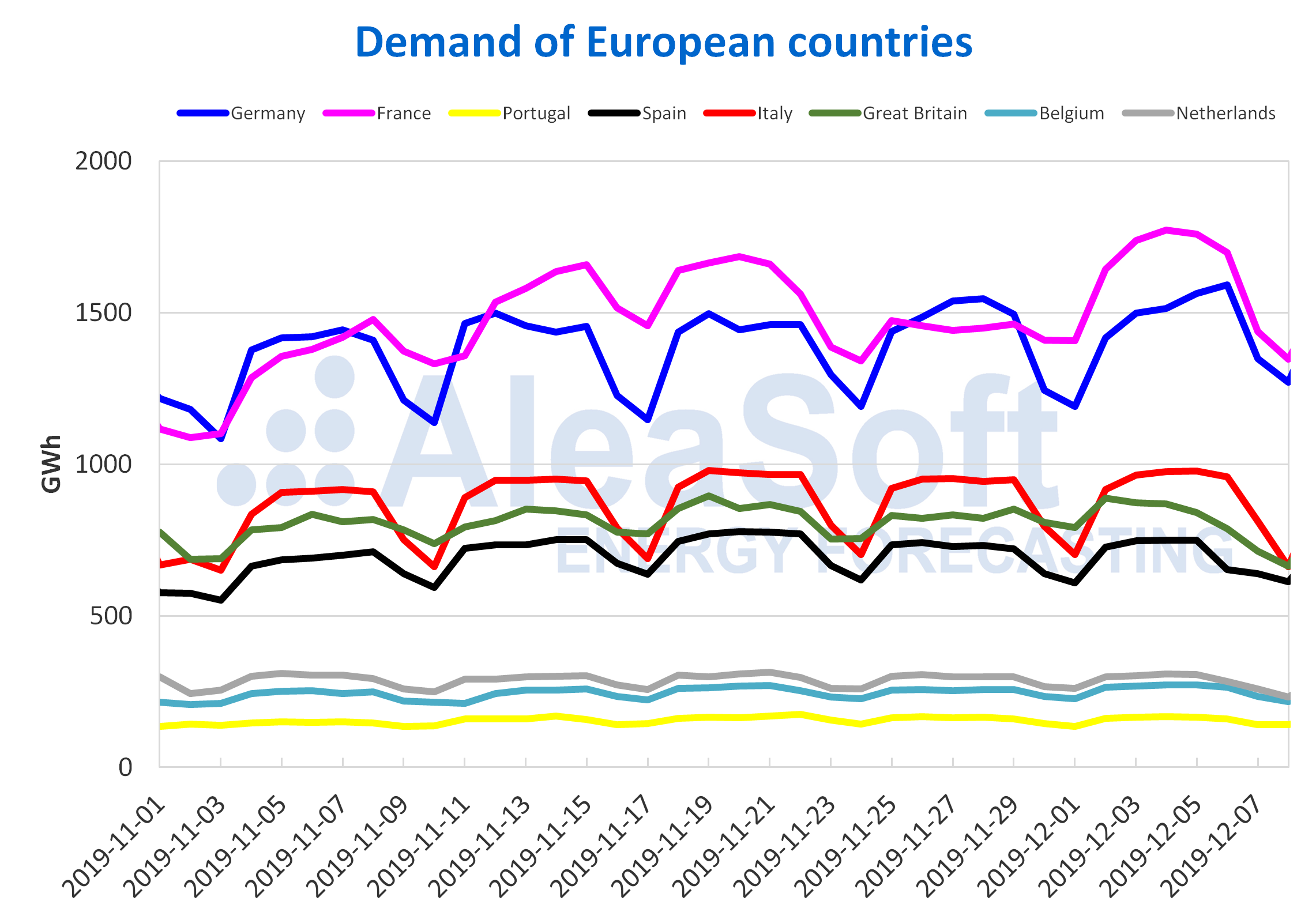 The recent days in the European electricity markets were marked by the fall in prices in the EPEX SPOT market of Germany to negative values. There were several hours with prices below zero in this market. The hours 4, 5 and 7 of Saturday, December 7, from hour 2 to 15 of Sunday, December 8, and from the hour 24 of that same day until the hour 6 of today Monday, December 9. So many hours with a negative price caused even the average price on Sunday December 8 to be ‑€16.38/MWh. Since the end of September the German market had no negative prices.

This significant drop in the price in Germany, in a scenario of low temperatures and growing demand, is due to the large wind energy production that the market registered in recent times. At AleaSoft it is expected that in the coming days the price of Germany will recover, likely to fall again at the end of this week. The average price for this week as a whole is expected to be lower than that of last week as wind energy production is expected to be high again.

In other European markets such as those of Belgium and the Netherlands in EPEX SPOT and in the N2EX market of Great Britain, negative hourly prices were also reached on December 8 and 9.

In contrast, in the rest of the analysed European markets, the prices of last week increased compared to those of the last week of November. The greatest increase, of 12%, was that of the EPEX SPOT market of France. In general in these markets, the increase in demand joined the decrease in wind energy production, causing the price increase. 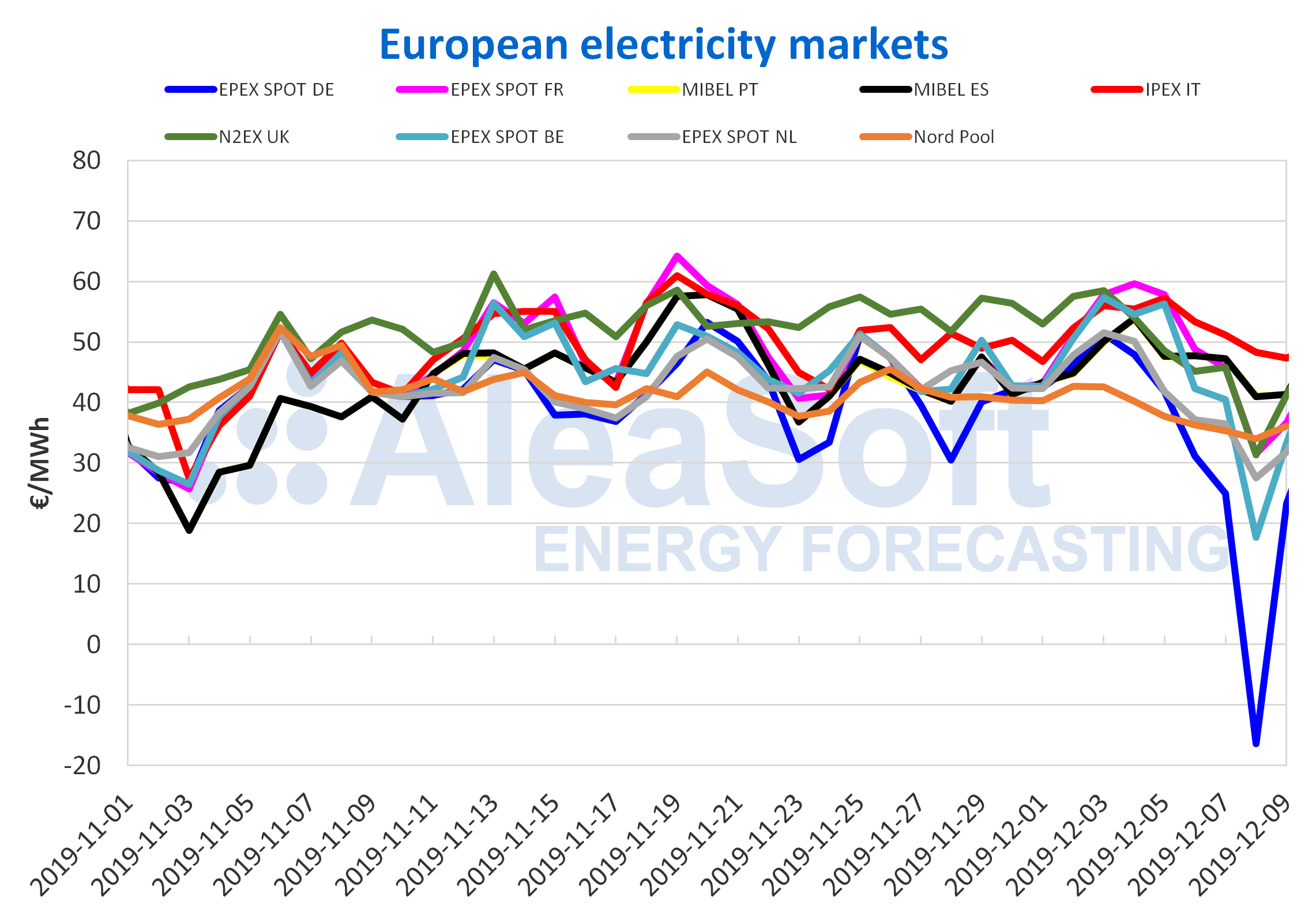 During the last week of December 2, the electricity futures prices for the first quarter of 2020 plummeted in all European markets analysed by AleaSoft. The falls vary between 4.1% of the futures of the Netherlands in the ICE market and 7.6%. This last value is that of the fall of the electricity futures of Spain in the EEX market, settling on Friday, December 6, at €47.40/MWh. This price is, until today, December 9, the lowest registered for the Q1‑20 product of Spain in this market in 2019. In general, most futures markets set their annual minimum record during the past week.

The price drop extends to electricity futures for the 2020 calendar year. This product registered declines between 2.8% and 4.6%. It is the EEX market of Great Britain the one that marked the greatest decline, settling on Friday, December 6, at €45.00/MWh. The lowest drop market was the EEX of France, and even in that case the €47.74/MWh with which it settled last week, represent the minimum record of the future of 2020 for this market in 2019.

The Brent oil futures prices for the month of February 2020 in the ICE market registered an upward trend last week. Each day the settlement price was higher than that of the previous day, except on Tuesday, December 3, when there was a 0.2% decrease. As a result of these increases, the settlement price of Friday, December 6, was $64.39/bbl. This value is the highest since September 16 when $65.59/bbl were reached after the attacks on oil facilities in Saudi Arabia.

These price increases are related to the commitments reached at the OPEC+ meeting, held in Vienna last week, where it was agreed to increase production cuts until March 2020. In addition, on Friday, Saudi Arabia also announced additional cuts to those agreed with the objective of avoiding oversupply of the market. However, although the increase in the cuts will act as a price support, the evolution in the coming weeks will depend on the levels of production of the United States, which is not among the signatories of the agreement.

The TTF gas futures prices in the ICE market for the month of January 2020 fell during the past week, except for Wednesday, December 4, when they increased 0.7%. The settlement price of Friday, December 6, was €15.14/MWh, a value 7.3% lower than that of the Friday of the previous week, which is also the lowest in the last two years. These drops could slow down in the next few days if the temperatures drop.

The TTF gas prices in the spot market decreased throughout the past week, from €15.77/MWh on Monday, December 2, to €13.59/MWh on the weekend of December 7. This Monday, December 9, the index price was €13.71/MWh, approximately €2/MWh lower than that of Monday of last week.

The CO2 emission rights futures prices in the EEX market for the December 2020 reference contract began last week with decreases, registering a settlement price of €24.15/t on Tuesday, December 3, which was the minimum value of that week. On Wednesday, December 4, with an increase of 3.1%, prices began to recover. Although on Thursday, December 5, there was a slight price decrease of 0.2%, on Friday, December 6, the upward trend continued, reaching a settlement price of €25.10/t, which was the maximum of the past week. In the coming days, the prices are expected to remain around €25/t, although the result of the UK elections of next Thursday, December 12, may influence the evolution of this market. 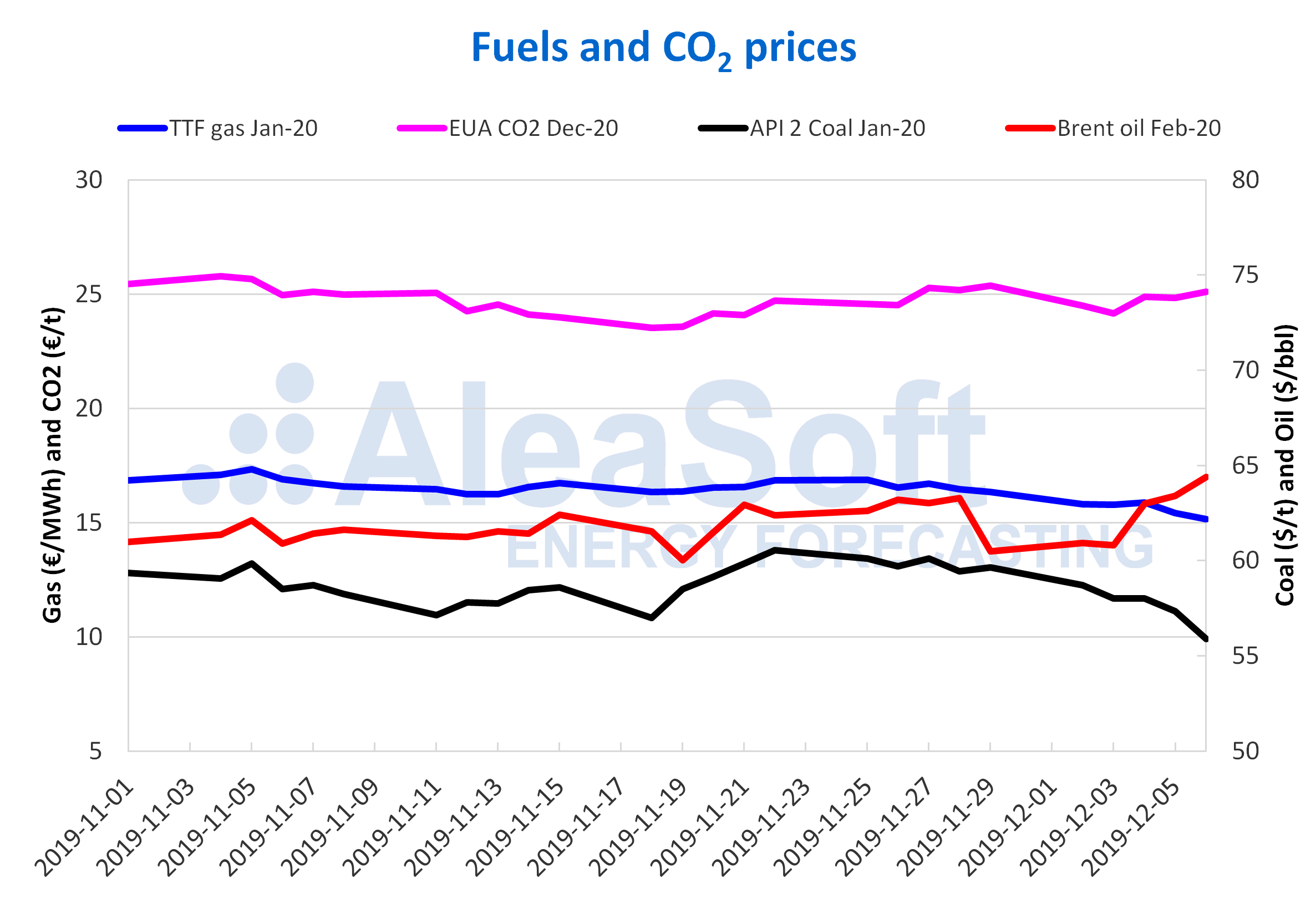