AleaSoft, May 27, 2019. AleaSoft analyses the fuels markets price, CO2 emission rights, European electricity markets and renewable energies production during the past week, in which the prices of the majority of European markets decreased with respect to the previous week with the exception of the Iberian market MIBEL. Another noteworthy aspect of the ended week is the negative prices on Sunday, May 26, in the EPEX SPOT markets of Germany, France and Belgium due to high renewable energy production.

The price of Brent oil futures for July 2019 in the ICE market showed a sharp drop in the middle of last week, settling on Friday, May 24, at 68.69 $/bbl, which represents a difference of 3.52 $/bbl with respect to the Friday of the previous week. In this market, US sanctions on Iran and Venezuela continue affecting, along with the OPEC production cuts, which put pressure on prices on the supply side. However, the concerns related to demand and economic growth as a result of the commercial tensions between the United States and China, as well as the increase in crude reserves in the United States, had a greater impact last week on the tension experienced by the market, causing the price to fall.

The TTF gas futures in the ICE market for June 2019 settled on Friday, May 24 at 12.25 €/MWh, 4.7% lower than the previous Friday. This market remains with a downward trend since April 9.

The price of API 2 coal futures for the month of June 2019 in the ICE market settled on Friday, May 24, below 57 $/t. This market continues trading with historical lows, declining more than 4 $/t in just two weeks.

The price of CO2 emission rights futures in the EEX market for the reference contract of December 2019 settled on Friday, May 24, at 25.47 €/t, 1.8% higher than on Friday of the last week. Despite the upward and downward changes over the past week, prices remain within the range of 24.70 €/t and 27.54 €/t. The odds of a Brexit without agreement increased after the resignation of the British Prime Minister Theresa May, so it is expected that this market remains unstable, with the probability that the price will go down. 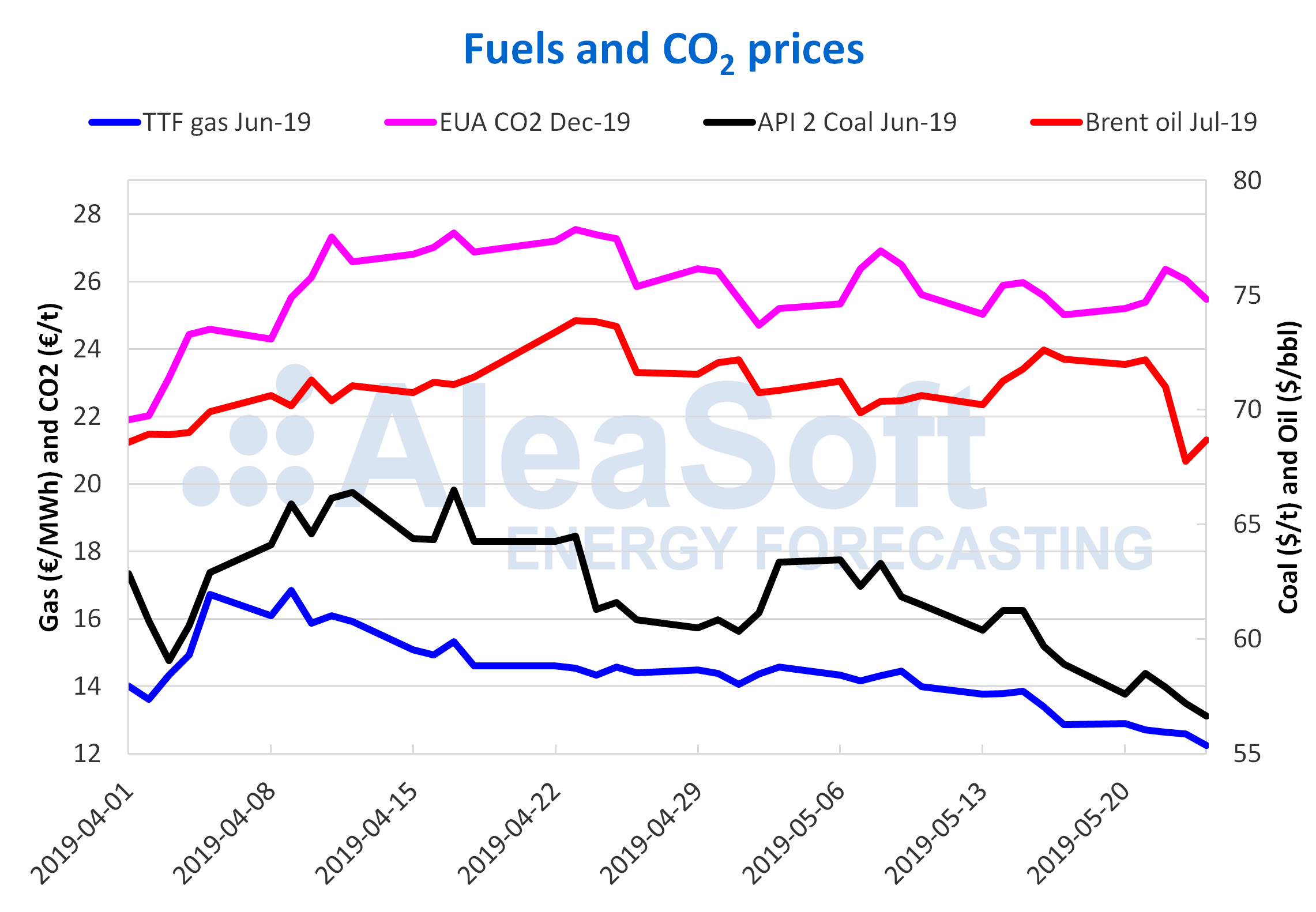 Last week, of May 20, the price of most of the European electricity markets fell compared to the values registered the previous week, from 2.0% of the EPEX SPOT market of the Netherlands, to 8.8% of the IPEX market of Italy. During the last week the temperatures of the continent were higher compared to those of the previous week, which favoured that the electricity demand fell at European level, this being one of the causes of the decrease in prices. Another highlight last week is that the market prices of Sunday, May 26, had negative values between hours 14 and 16 in the EPEX SPOT markets of Germany, France and Belgium, making the average daily price of these markets during this day to be around 21 €/MWh. The high renewable energy production in Germany, both wind and solar energy, together with the fact that the demand for a Sunday is lower, is the fundamental reason for the behaviour of prices on the 26th.

The only European market in which prices increased last week was MIBEL of Spain and Portugal, with an increase of more than 4%, whose average weekly price was around 51 €/MWh. Although the electricity demand was lower last week, as in the rest of Europe, the drop in renewable energy production in the Iberian Peninsula compared to the previous week, of 33% in the case of wind energy and a 4.6% in the case of solar energy, as well as the reduction in available nuclear power due to the scheduled shutdown for refuelling of the Ascó II and Trillo power plants, are the main elements that caused prices to rise.

Last week, the European markets continued to be divided in two groups according to their price. In the group of markets with the highest prices were the MIBEL market, which led the European electricity price ranking most of last week, the IPEX market of Italy and the N2EX market of the UK.

In the group of markets with lower prices, most of the week with prices around 40 €/MWh or below, were the Nord Pool market of the Nordic countries and the EPEX SPOT markets of Germany, France, Belgium and Netherlands. 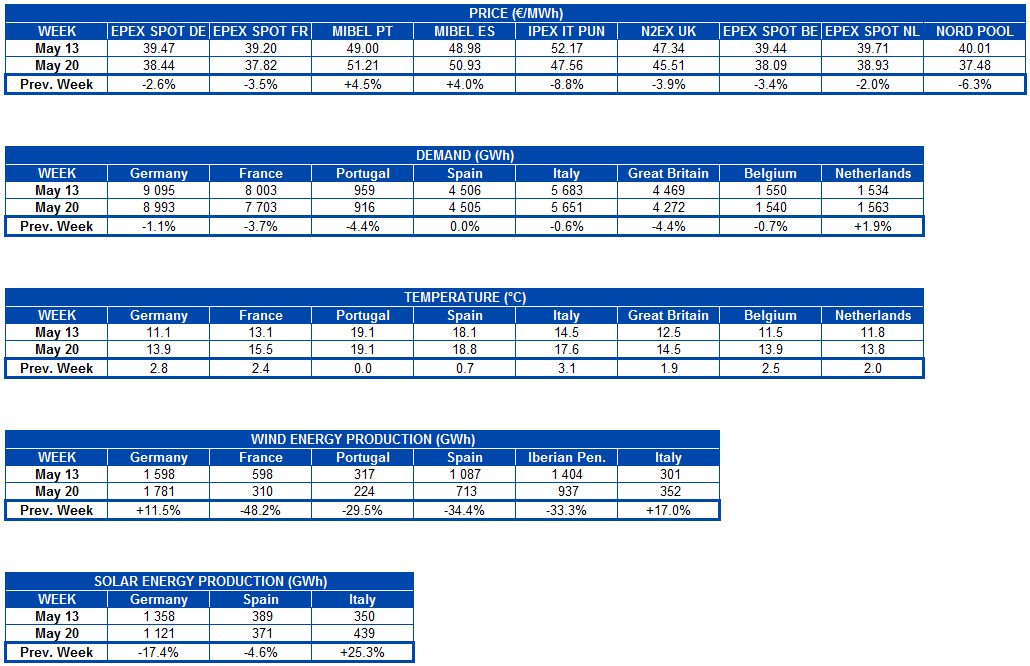 The European electricity futures prices for the third quarter of 2019 returned to settle last week on Friday, May 24, with a generalized drop compared to the Friday of the previous week, except for the MTE market operated by GME that remains unchanged. The Nordic ICE and NASDAQ markets stand out in this fall, for which the decrease was close to 5%. For the rest of the markets, the decrease is between 0.3% and 3%.

However, in the case of the European electricity futures for the year 2020, although in some markets the prices fell, as in the case of futures of Spain and Portugal that had a reduction of around 0.5% and futures of the Nordic countries that had a decrease of around 1.8%, in the rest of the markets the prices went up between 0.1% and 0.9%. The price of Italian futures in the MTE market for the year 2020 remains unchanged, as do the futures of the third quarter of this year. 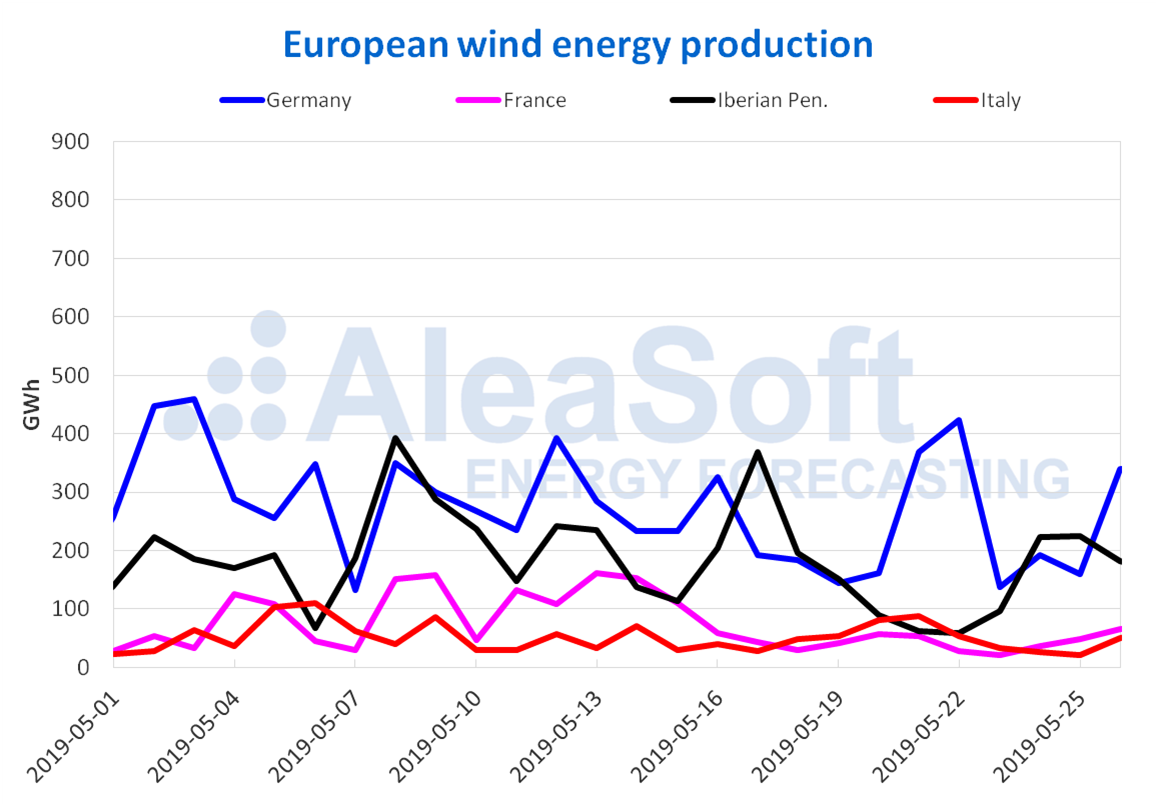 In the week just finished, the solar energy production, which includes photovoltaic and solar thermal technologies, suffered a reduction of 17% and 5% in Germany and Spain respectively, while it increased in Italy by 25%. For the current week, at AleaSoft it is expected that solar energy production will have a slight increase in Germany and Spain, and a small decrease in Italy. 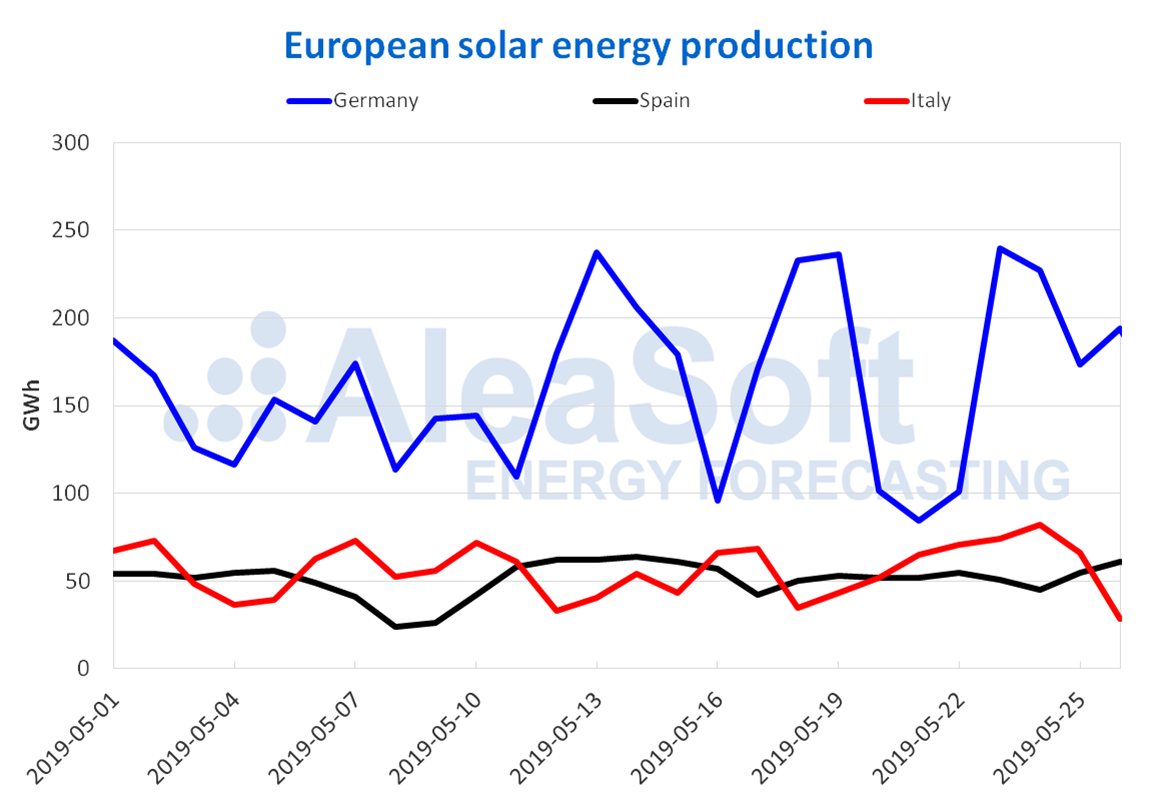