AleaSoft Energy Forecasting, December 1, 2022. In November, prices of most European markets were higher than those of October, except for MIBEL, which registered the lowest price since August 2021, including the adjustment price due to the gas cap. In most markets, the increase in wind energy production failed to offset the rise in demand and in gas and CO2 prices. The solar energy production increased compared to November 2021.

During the recently concluded month of November, the solar energy production increased compared to the same month of 2021 in all markets analysed at AleaSoft Energy Forecasting. The largest increase occurred in Germany, with a rise of 53% in year‑on‑year terms. The market where the lowest increase in solar energy production was registered was Portugal, with a rise of 5%.

On the other hand, the solar energy production decreased in Europe compared to the previous month, a behaviour that is in line with the decrease in hours of sunshine in the continent. The main decrease occurred in Germany, where the decrease was 50%, while Portugal was where the solar energy production decreased the least compared to October, registering a drop of 21%.

In November 2022, 167 MW of solar photovoltaic capacity were installed in Mainland Spain, bringing the installed capacity of this technology to 17 745 MW. 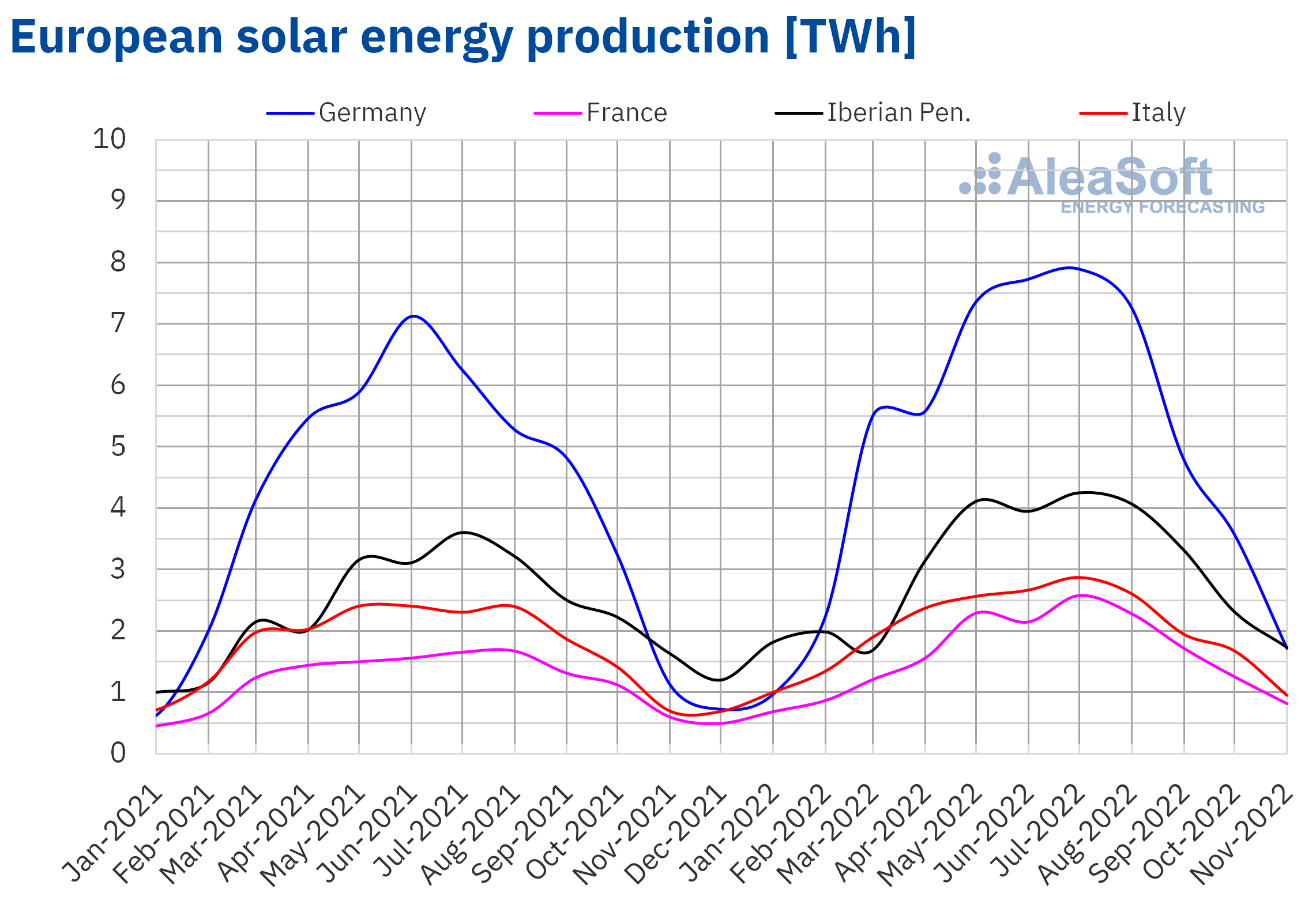 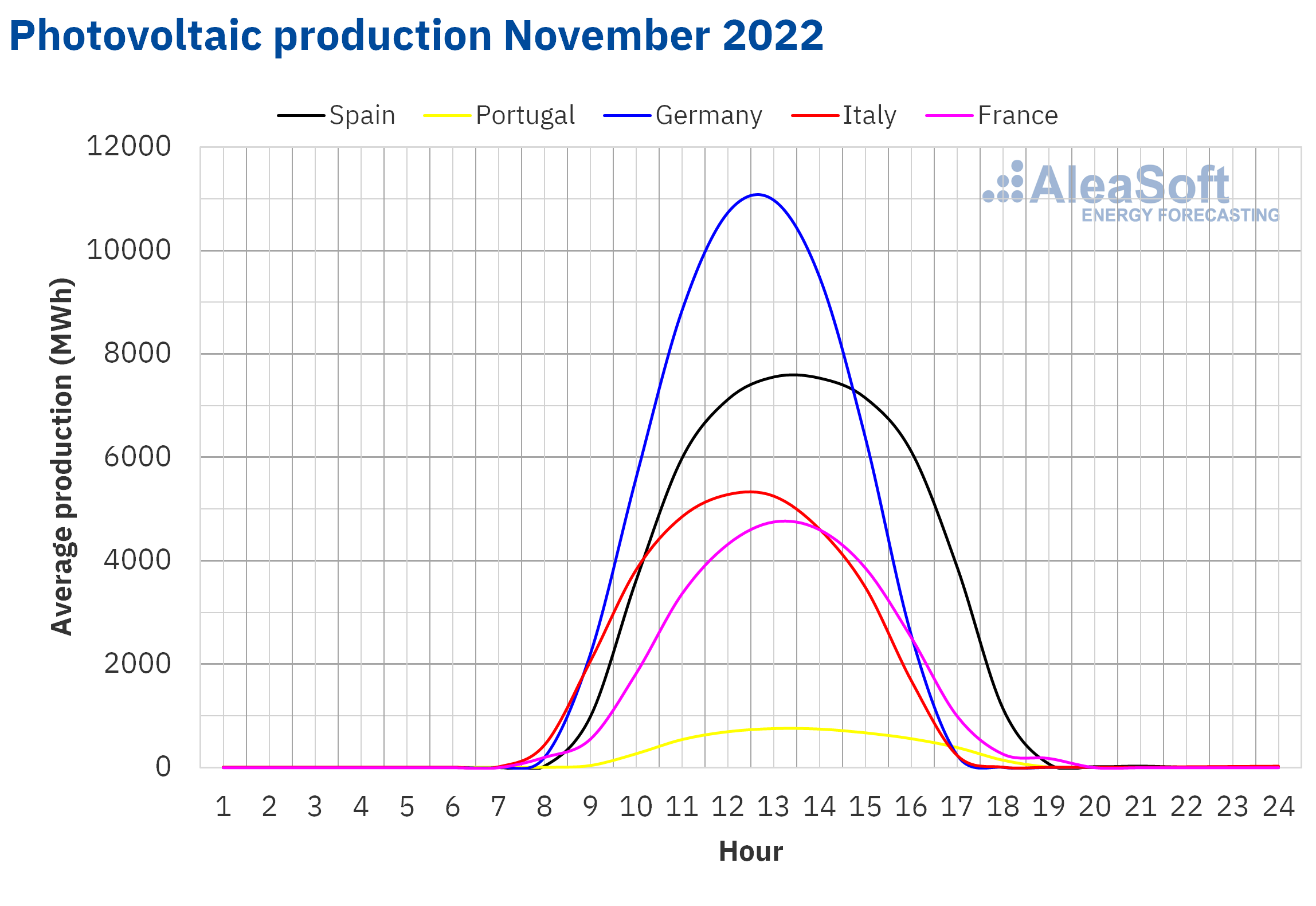 Regarding the wind energy production, the month of November ended with generalised increases compared to the same month of the previous year. This increase was most notable in France, since its wind energy production of November increased by 80% compared to that of the equivalent period of 2021. The smallest increase was registered in Portugal, of 2.0%.

The wind energy production was also higher in November compared to October, with a notable increase of 86% in Italy and Portugal being again the market with the lowest registered increase, in this case of 13%.

In November 2022, the wind energy capacity in Mainland Spain stood at 29 035 MW, with new 41 MW of this technology being installed in this period. 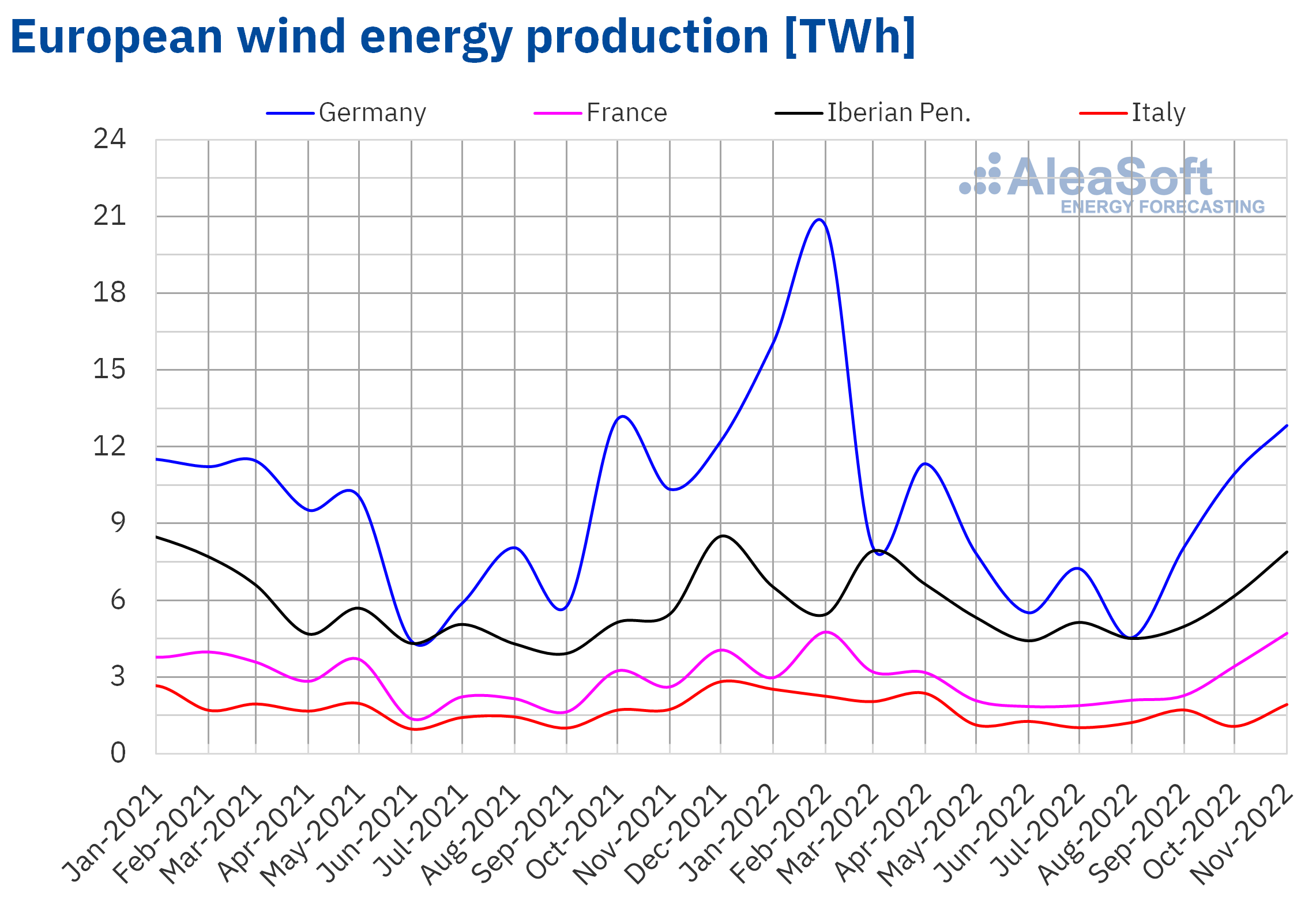 In the month of November 2022, the electricity demand fell in a generalised way in the European electricity markets compared to the same month of the previous year. The largest year‑on‑year drop was registered in the French market, which was 17%, followed by the 14% drop in the market of the Netherlands. In the markets of Belgium, Great Britain, Spain and Italy, the decreases were between 6.6% of the Italian market and 10% of the markets of Belgium and Great Britain. The markets of Germany and Portugal were those that registered the smallest decreases, which were 2.5% and 3.2% respectively. In November 2022, the average temperatures were higher than those of the same month of 2021, which favoured the decrease in demand.

In the comparison with October 2022, the demand increased in all European markets in line with the drop in average temperatures. The largest increase was registered in the French market, which was 18%, followed by the increases of 13% in the demand of the British market and 7.3% in the German market. In the markets of Portugal, Spain, the Netherlands, Italy and Belgium, the increases were 6.2%, 5.0%, 4.1%, 4.1% and 2.4% respectively. 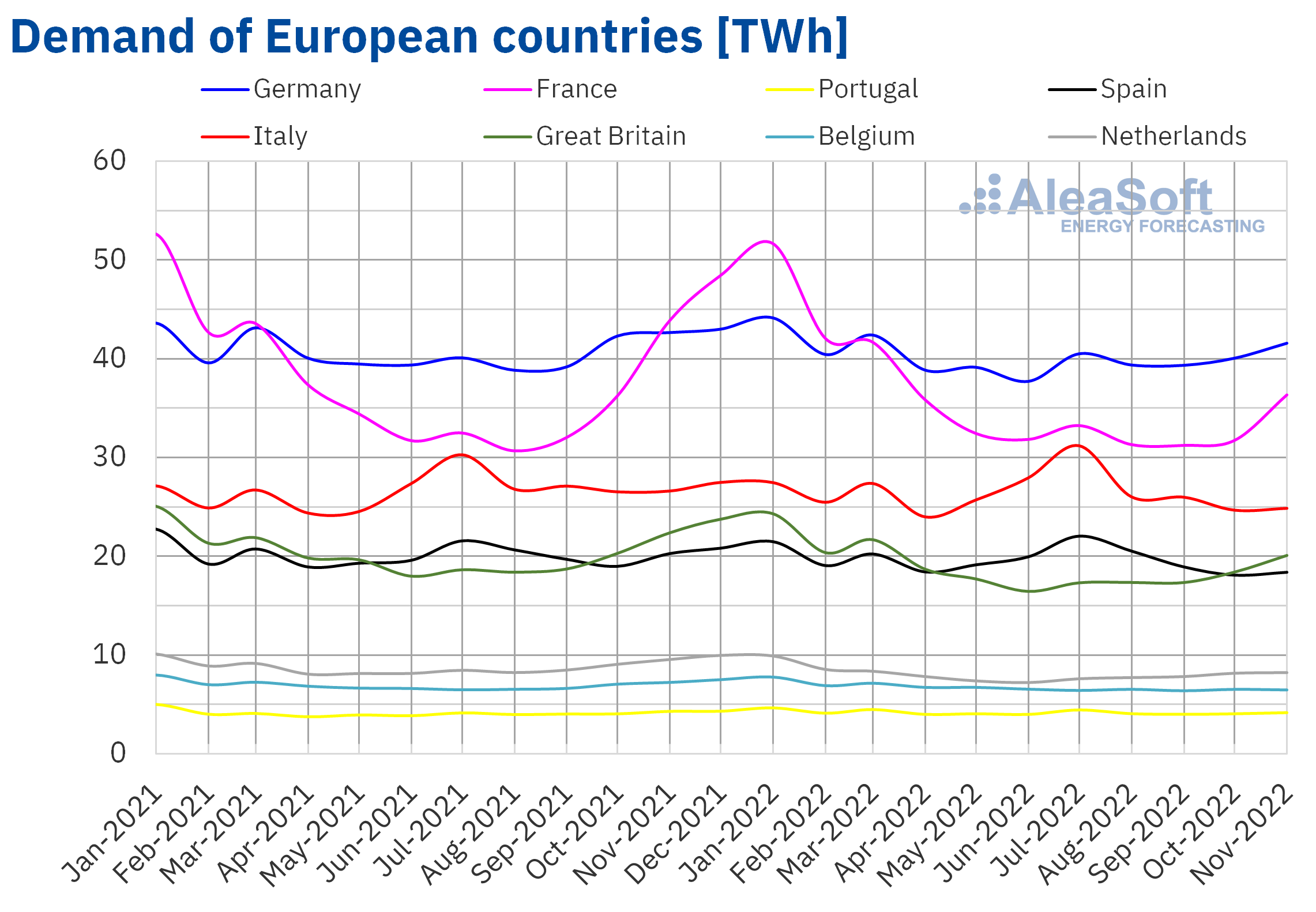 In the month of November 2022, the monthly average price was above €155/MWh in almost all European electricity markets analysed at AleaSoft Energy Forecasting. The exceptions were the Nord Pool market of the Nordic countries, with an average of €109.26/MWh, and the MIBEL market of Portugal and Spain, with €115.38/MWh and €115.56/MWh respectively. On the other hand, the highest monthly average price, of €224.51/MWh, was that of the IPEX market of Italy, followed by that of the EPEX SPOT market of France, of €191.88/MWh. In the rest of the markets, the averages were between €158.90/MWh of the N2EX market of the United Kingdom and €180.41/MWh of the EPEX SPOT market of Belgium.

In the case of the MIBEL market, if the price that some consumers have to pay to compensate for the limitation of gas prices currently in operation in this market is taken into account, the average price of November in the Spanish market was €124.43/MWh. This price is the lowest since August 2021.

Compared to the month of October 2022, in November average prices rose in almost all European electricity markets analysed at AleaSoft Energy Forecasting. The exception was the MIBEL market of Spain and Portugal, with decreases of 9.2% and 9.3%, respectively, and 24% in both cases if the price of the gas cap adjustment is taken into account. On the other hand, the highest rise, of 49%, was registered in the Nordic market, while the smallest increases were those of the Italian and French markets, of 6.2% and 7.3%, respectively. The rest of the markets had price increases between 14% of the German market and 16% of the British market.

If the average prices of the month of November are compared with those registered in the same month of 2021, prices fell in all markets, except in the Nord Pool market, where they rose by 30%. On the other hand, the largest fall in prices was that of the Iberian market, of 40%, and 36% if the gas cap adjustment price is taken into account, followed by that of the British market, of 27%. In the rest of the markets, the decreases were between 0.6% of the Italian market and 12% of the French market.

In the case of daily prices, taking into account the adjustment price due to the Iberian exception, on November 19 a price of €57.39/MWh was registered in the Spanish market. This price was the lowest in this market since June 20, 2021. 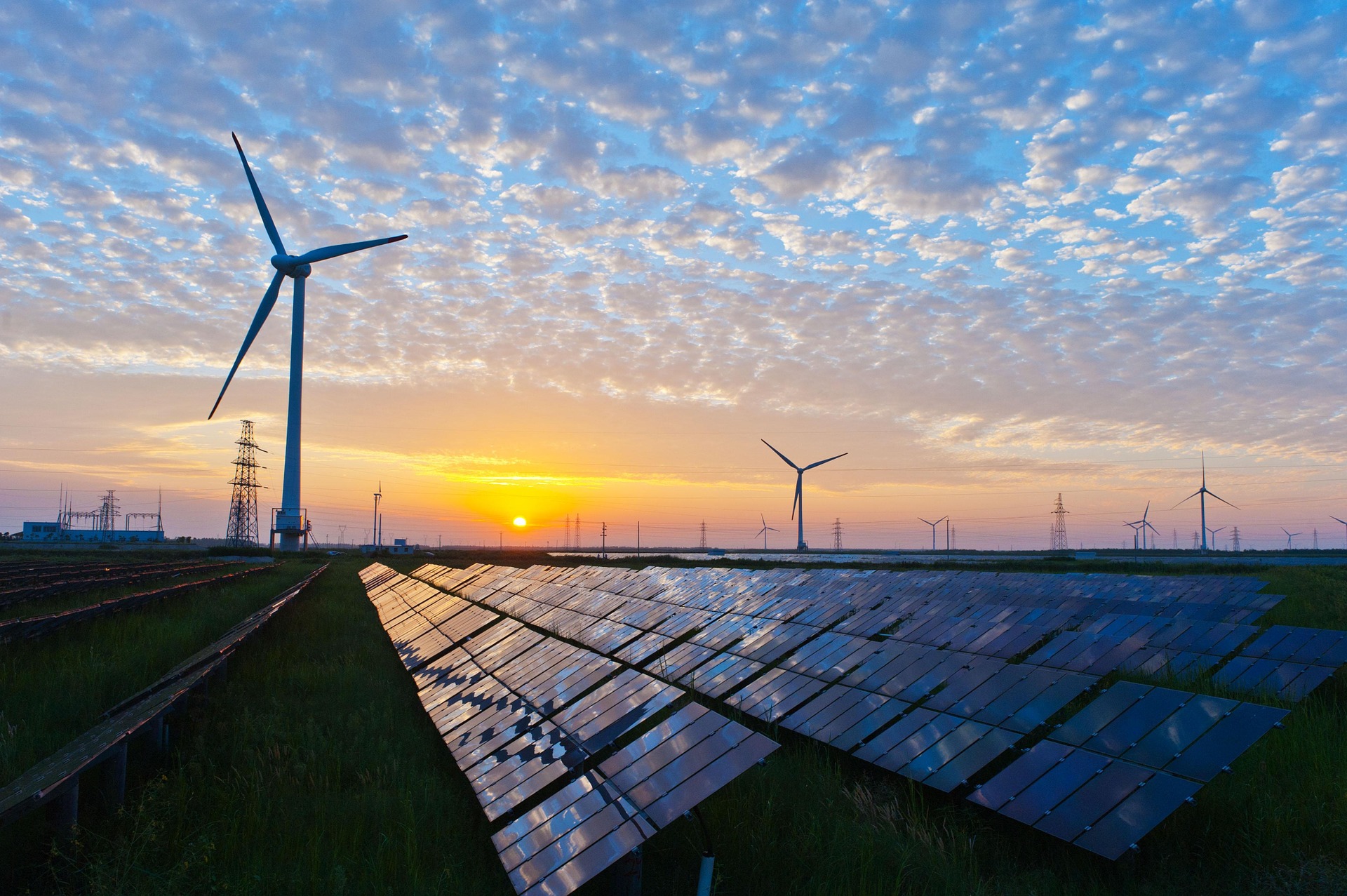 When compared to November 2021, the general decrease in demand and the increase in renewable wind and solar energy production offset the effect of the rise in gas and CO2 emission rights prices. This led to average prices lower than those of the same month of the previous year in almost all analysed electricity markets. 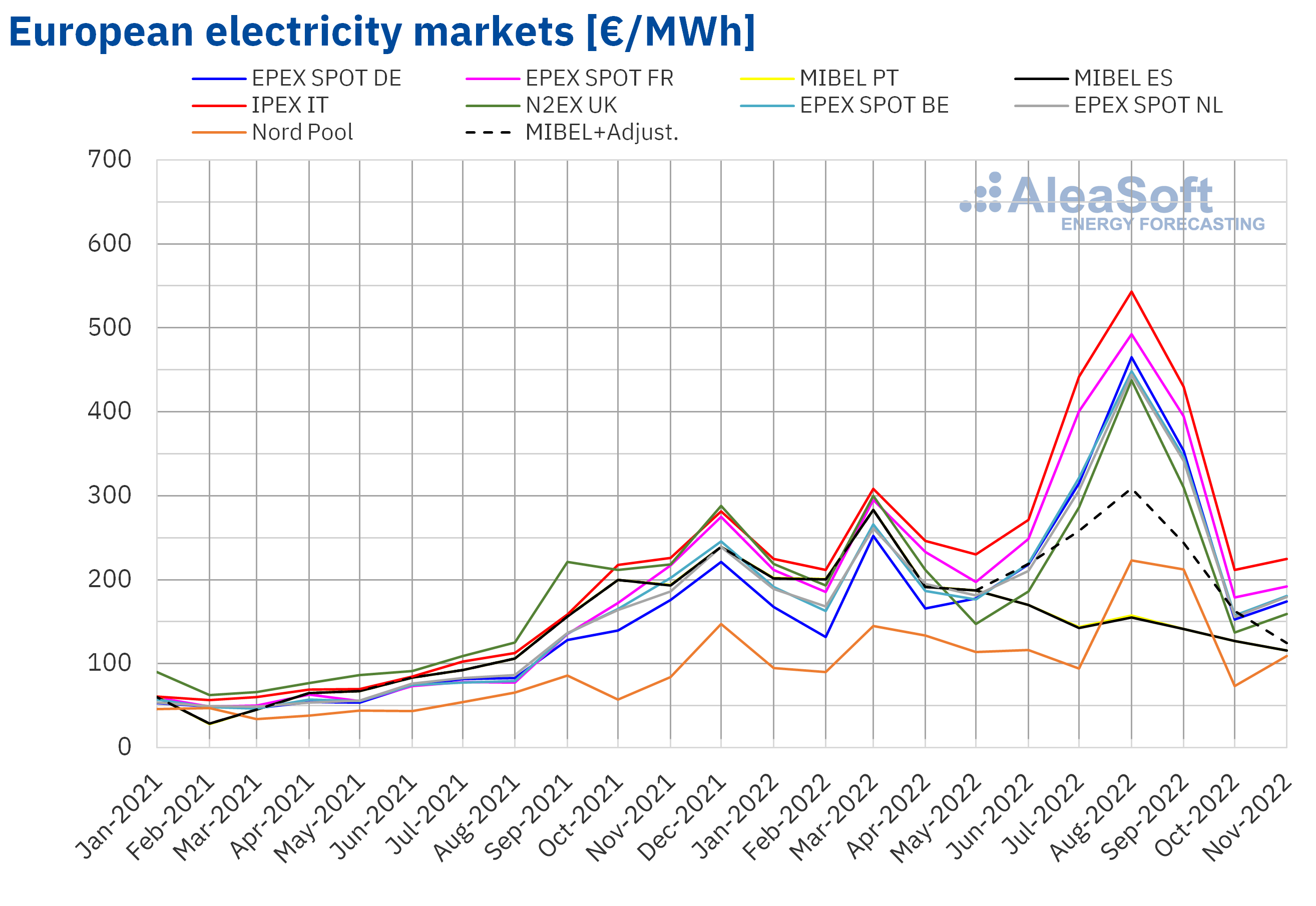 Concerns about the evolution of the demand due to the global economic situation influenced Brent oil futures prices downwards during the month of November. In the middle of the month, both OPEC and the International Energy Agency lowered their forecasts for 2023 demand. The spread of COVID‑19 in China also contributed to increasing concerns about the crude oil demand in the second half of the month.

During the month of November, the high levels of European reserves and temperatures higher than usual for the time contributed to the decrease in the average price of TTF gas futures compared to the previous month. However, in the second half of the month, the decrease in the number of vessels waiting to unload at the regasification plants and forecasts of low temperatures led to the increase in prices. In addition, threats of reductions in the supply of Russian gas also exerted their upward influence on prices.

Regarding CO2 emission rights futures prices in the EEX market for the reference contract of December 2022, after some fluctuations, they increased in the last part of November. These increases were influenced by prospects of low temperatures. As a consequence of this trend, on November 30, the monthly maximum settlement price, of €84.69/t, was reached. This price was the highest since the end of August. 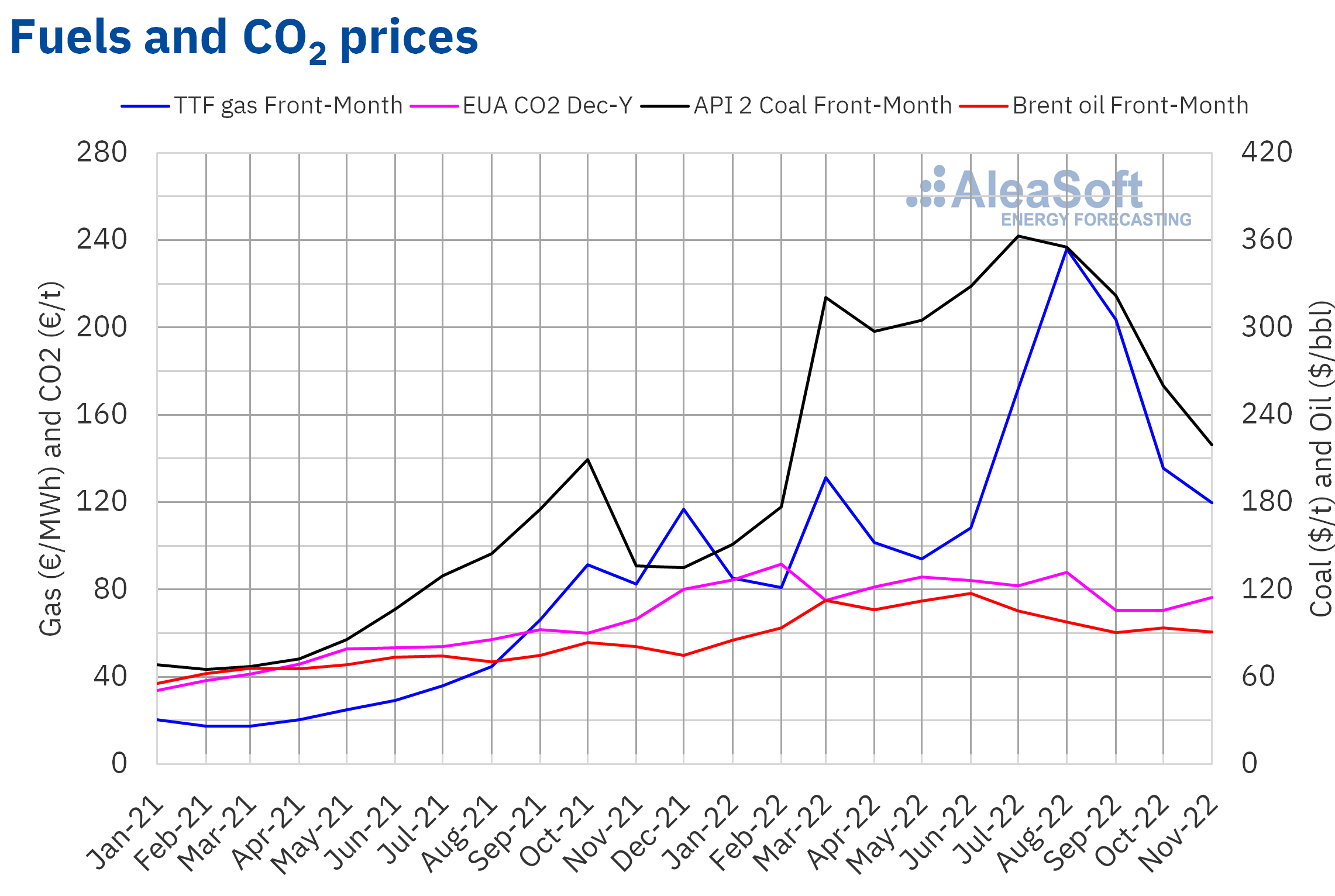 At AleaSoft Energy Forecasting, Alea Energy DataBase (AleaApp) was developed, an online platform for the visualisation and analysis of all data from the energy markets and those variables that may have an impact on them. This tool is of great interest to data analysts, traders, energy producers and retailers, promoters of renewable energy projects, CEOs and CFOs, as well as journalists specialised in the sector, due to its reliability and ease of use, since data are compiled at the same source and with the same format.