AleaSoft Energy Forecasting, December 5, 2022. In the week of November 28, prices of all European electricity markets rose. Daily prices above €350/MWh were registered in several markets and in the British £1000/MWh were exceeded in a few hours. Temperatures continued to drop, which led to the increase in demand in most markets. Gas and CO2 prices also increased, which together with the decrease in renewable energy production, favoured the increase in electricity markets prices.

During the week of November 28, the solar energy production increased by 29% compared to the previous week in the Spanish market and by 18% in the Portuguese market. In the rest of the markets there were falls of between 17% of France and 68% of Germany.

For the week of December 5, the AleaSoft Energy Forecasting’s solar energy production forecasting indicates an increase in production in Germany and a reduction in Spain. In the Italian market, it is expected that there will be little variation compared to the previous week. 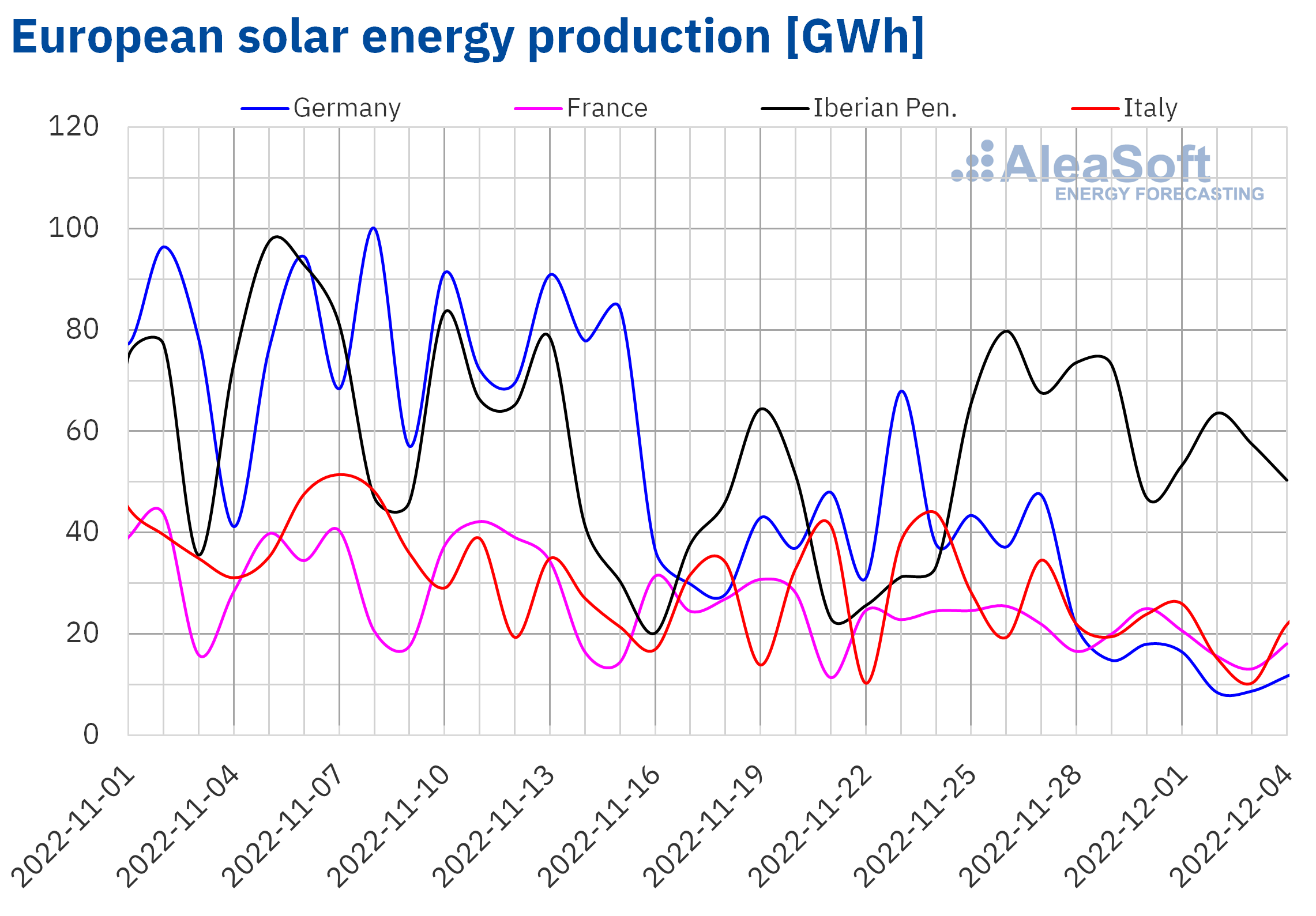 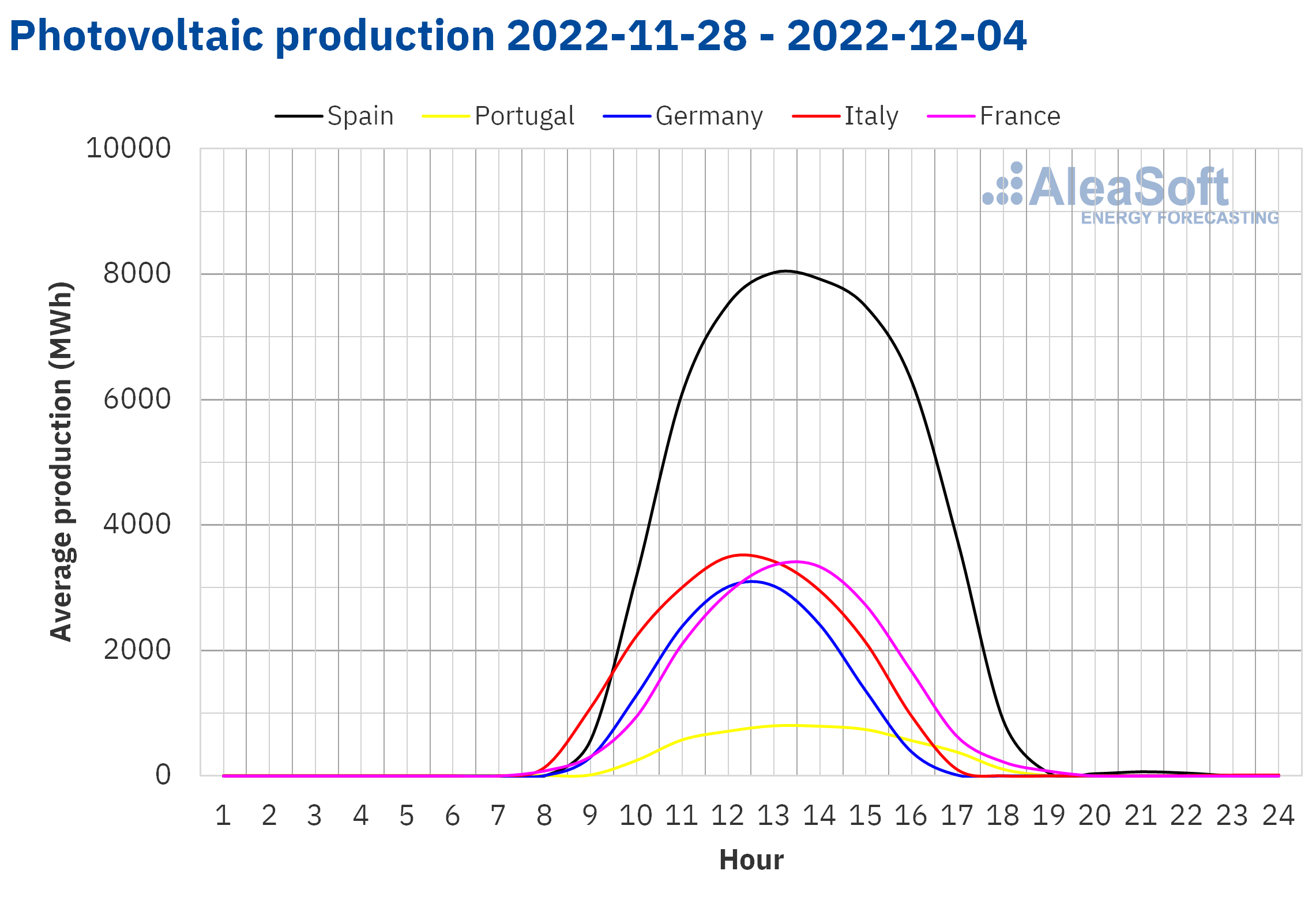 In the case of the wind energy production, during the week that began on November 28 it decreased compared to the previous week in all markets analysed at AleaSoft Energy Forecasting. The smallest fall was registered in the German market and was 39%. In the Italian market the production decreased by 41% while in the rest of the markets it fell between 49% of the Portuguese market and 59% of the French market.

For the week of December 5, the AleaSoft Energy Forecasting’s wind energy production forecasting indicates an increase in the markets of Germany, Spain and Italy. On the contrary, a reduction in production with this technology is expected in Portugal and little variation is expected in the French market. 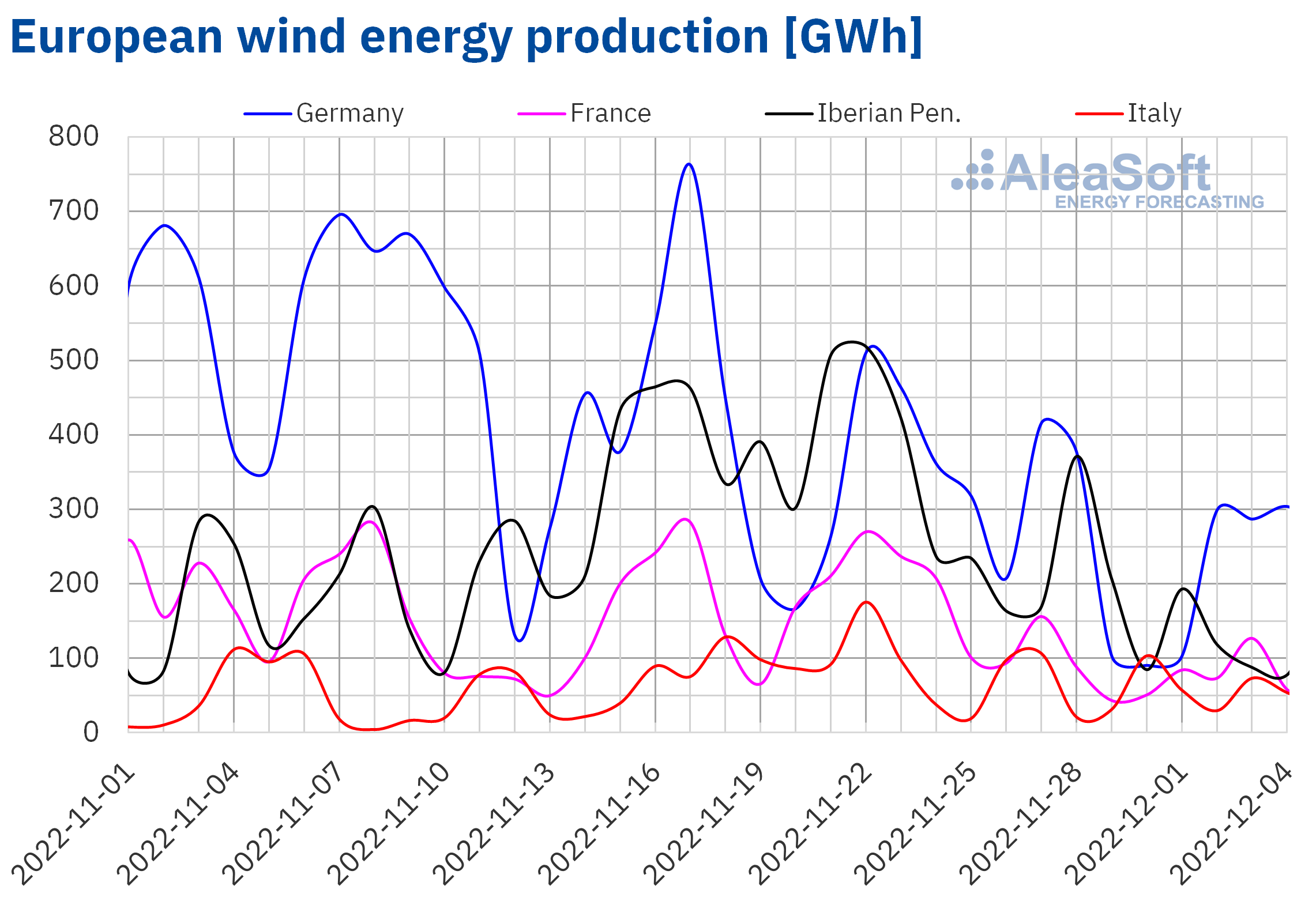 In the week of November 28, the electricity demand increased compared to the previous week in most European markets analysed at AleaSoft Energy Forecasting, as a result of the general drop in temperatures. The largest increases were reached in the Netherlands, France and Great Britain, of 9.6%, 8.6% and 8.0%, respectively, while the smallest increases were registered in the Italian and Portuguese markets, which were 1.4%, and 1.6%. However, in the German market the demand fell by 0.8% in the analysed period.

During the week of December 5, according to the demand forecasting made by AleaSoft Energy Forecasting, the demand is expected to continue increasing in most markets because average temperatures will continue to drop. However, the demand is expected to decrease in Spain and Italy, where temperatures are expected to be higher than those of the previous week and where the Immaculate Conception Day holiday will be celebrated on December 8, and, in the case of Spain, December 6, Constitution Day, will also be a holiday. 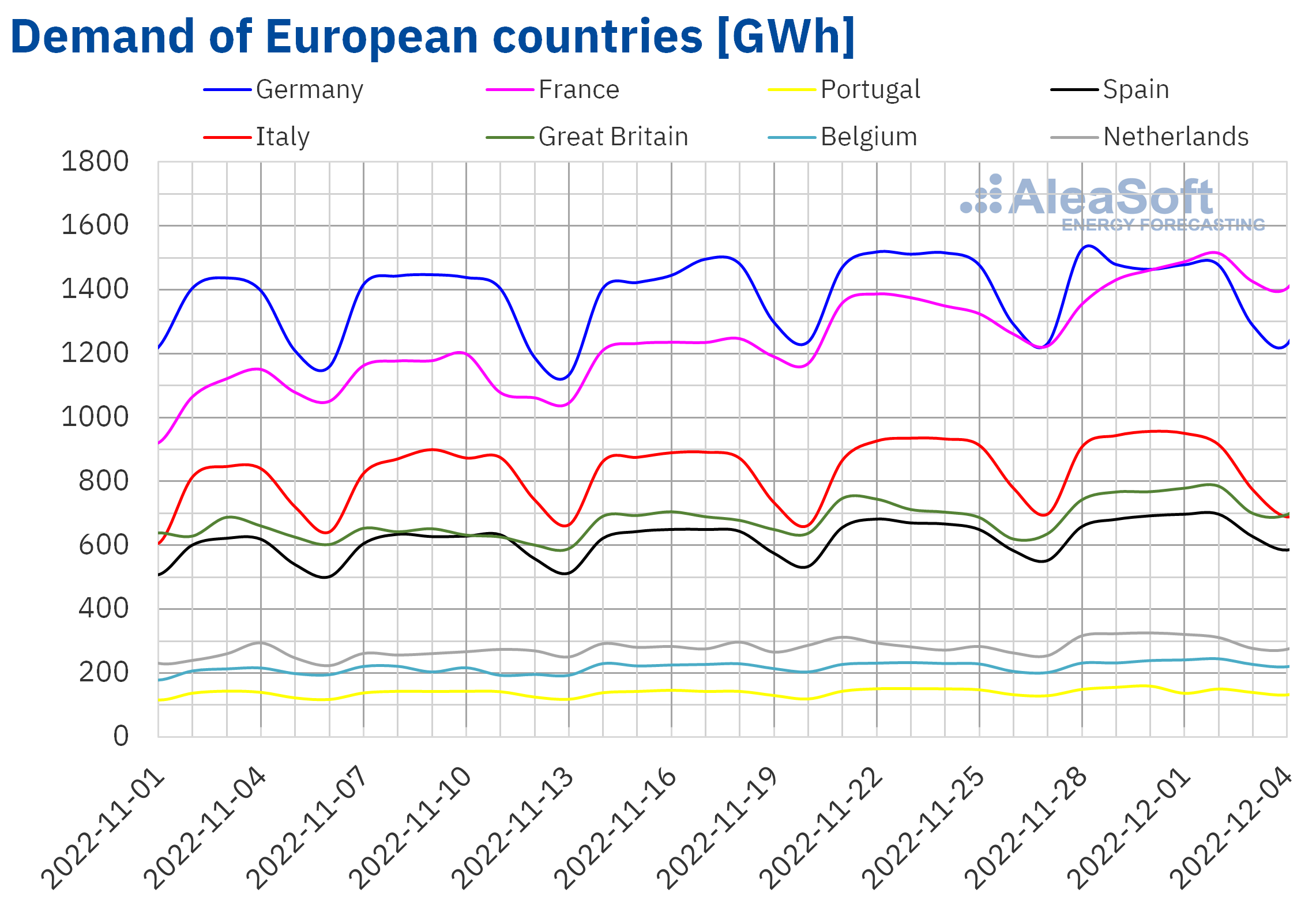 In the week of November 28, prices of all European electricity markets analysed at AleaSoft Energy Forecasting increased compared to the previous week. The largest price rise, of 120%, was that of the N2EX market of the United Kingdom, while the smallest increase was that of the MIBEL market of Spain and Portugal, of 25%. In the rest of the markets, the increases were between 38% of the IPEX market of Italy and 68% of the Nord Pool market of the Nordic countries.

In the first week of December, the highest average price, of €363.20/MWh, was that of the British market. On the other hand, the lowest weekly average was that of the Iberian market, of €137.67/MWh. Even taking into account the adjustment that some consumers have to pay due to the limitation of the gas price in this market, the average, of €194.01/MWh, continued to be the lowest. In the rest of the analysed markets, prices were between €299.36/MWh of the Nordic market and €354.20/MWh of the EPEX SPOT market of France.

Regarding hourly prices, on November 28 and 29, between 18:00 and 19:00, prices were above £1000/MWh in the British market, reaching a value of £1066.47/MWh on Tuesday, November 29. This price was the highest in this market since January 24. The average price of November 29 reached a value of £349.03/MWh in the British market, the highest price since September 1. In the rest of the markets, except for the MIBEL market, daily prices above €350/MWh were also registered on various days of the first week of December.

During the week of November 28, the rise in TTF gas and CO2 emission rights prices compared to the previous week exerted an upward influence on European electricity markets prices. The increase in electricity demand in almost all markets, the general decrease in wind energy production and the drop in solar energy production in markets such as Germany, France and Italy also contributed to the registered price increases. 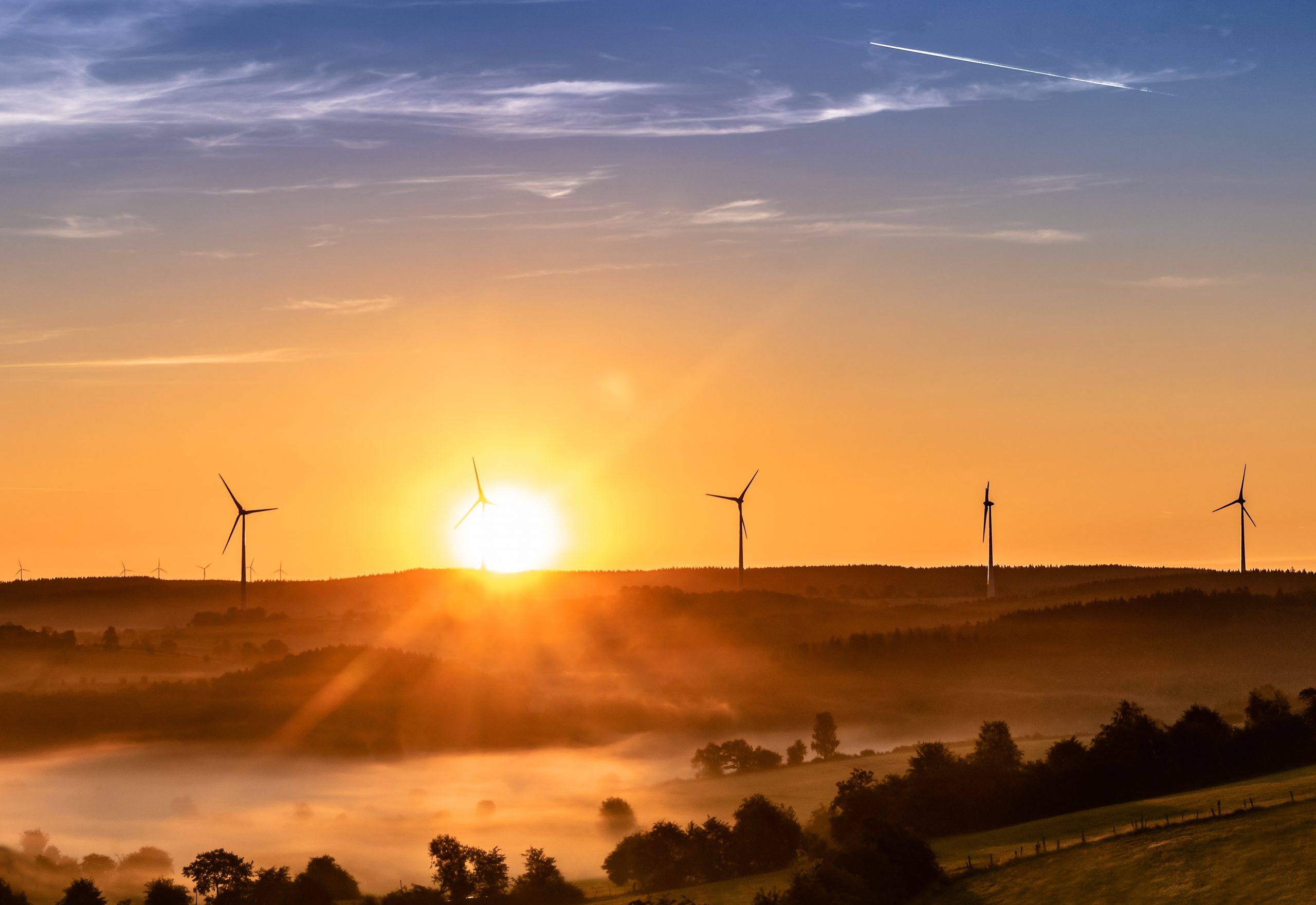 The AleaSoft Energy Forecasting’s price forecasting indicates that in the second week of December prices might continue to increase in some European electricity markets, influenced by the increase in demand and the decrease in wind energy production. 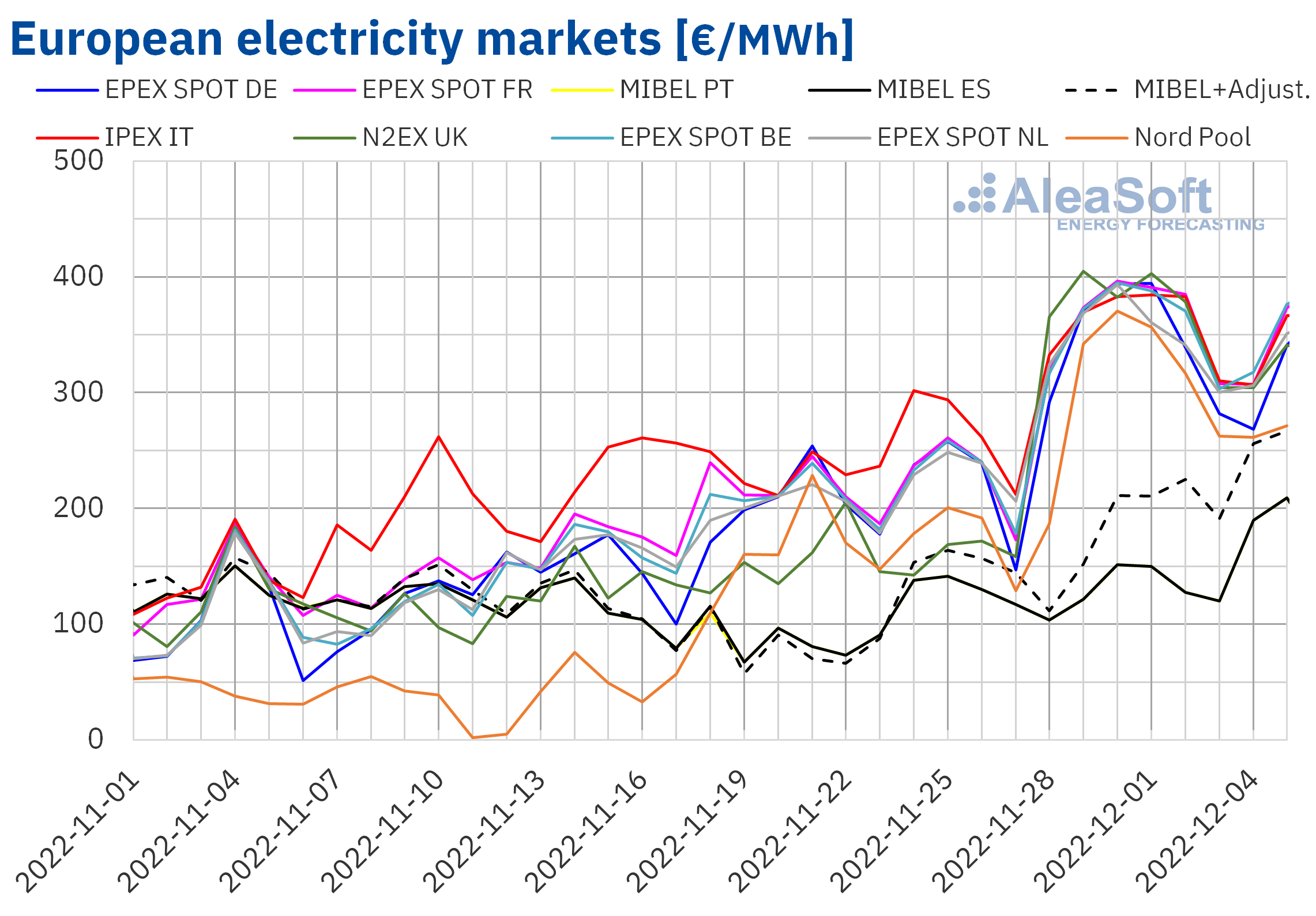 In the first week of December, settlement prices of Brent oil futures for the Front‑Month in the ICE market remained below $87/bbl. The minimum settlement price for the week, of $83.19/bbl, was registered on Monday, November 28. This price was 4.9% lower than that of the previous Monday and the lowest since January 10, 2022. Subsequently, prices increased until reaching the weekly maximum settlement price, of $86.97/bbl, on Wednesday, December 1. But on Thursday and Friday prices fell again to $85.57/bbl of Friday, December 2.

During the second week of December, the evolution of prices might be conditioned by the OPEC+’s decision to maintain its current production levels, agreed at the meeting of Sunday, December 4, and by the sanctions of the European Union on Russian oil. A possible increase in demand as a result of less stringent lockdowns in China might also exert an upward influence on prices.

Concerns about the drop in temperatures contributed to reaching the maximum price of Wednesday, November 30. However, the high levels of the reserves and an increase in supply led to the decline in prices in the last sessions of the first week of December.

Regarding settlement prices of CO2 emission rights futures in the EEX market for the reference contract of December 2022, on Monday, November 28, a slight decrease was registered compared to the last session of the previous week. However, the rest of the week settlement prices maintained an upward trend and registered values above €80/t. As a consequence of these increases, on Friday, December 2, a settlement price of €87.67/t was reached, 11% higher than that of the previous Friday. This price was the highest since August 26. 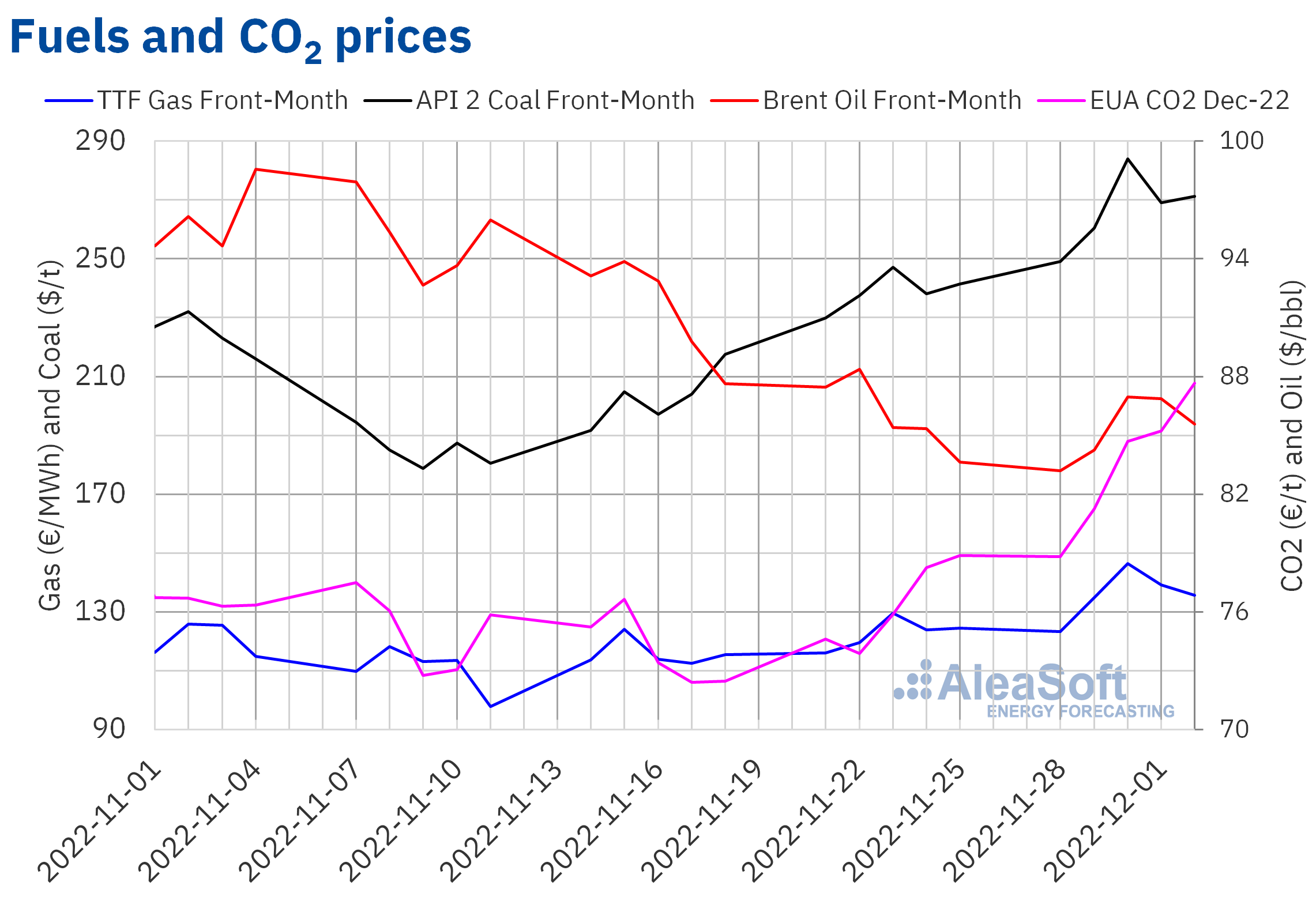 On next December 15, a new edition of the monthly webinars of AleaSoft Energy Forecasting and AleaGreen will be held, which will be the last of this year 2022. The speakers, Oriol Saltó i Bauzà and Alejandro Delgado Fornaguera, Associate Partners at AleaGreen, will carry out an analysis of the evolution of the markets during the year 2022, as well as the main measures adopted by the European governments to try to alleviate the effects of the high energy prices. In addition, they will analyse the long‑term vision of the future of European energy markets in 2050 and they will explain the use of tools for risk management and business opportunities, for the renewable energy assets valuation for PPA and audits and of Alea Energy DataBase (AleaApp), the online platform for the compilation, visualisation and analysis of energy markets data. At the analysis table of the Spanish version of the webinar, in addition to Oriol Saltó i Bauzà and Antonio Delgado Rigal, CEO of AleaSoft, Gonzalo de Cossío Tweddle, founder of Intiura, and Jon Arregi, CEO of Meatze, will participate, who will analyse solutions to avoid the cannibalisation of prices and curtailments of renewable energy in little interconnected systems, with examples of specific cases in LATAM.