AleaSoft Energy Forecasting, November 28, 2022. In the fourth week of November, electricity markets prices rose in a generalised way, a behaviour that continued on Monday 28, when prices above €400/MWh were registered in various markets and above £1000/MWh in the British market. The main causes of these rises are the increase in demand due to the drop in temperatures and the increase in gas and CO2 prices. Brent futures registered the lowest price since the beginning of January of this year.

During the week of November 21 to 27, the solar energy production increased in the Iberian Peninsula and Italy, with increases of 13% and 21% respectively. Specifically in Portugal, the increase in solar energy production was 23% between the two weeks. Meanwhile, in Germany and France there were decreases compared to the previous week. In these markets the decrease was 7.0% and 10% respectively. 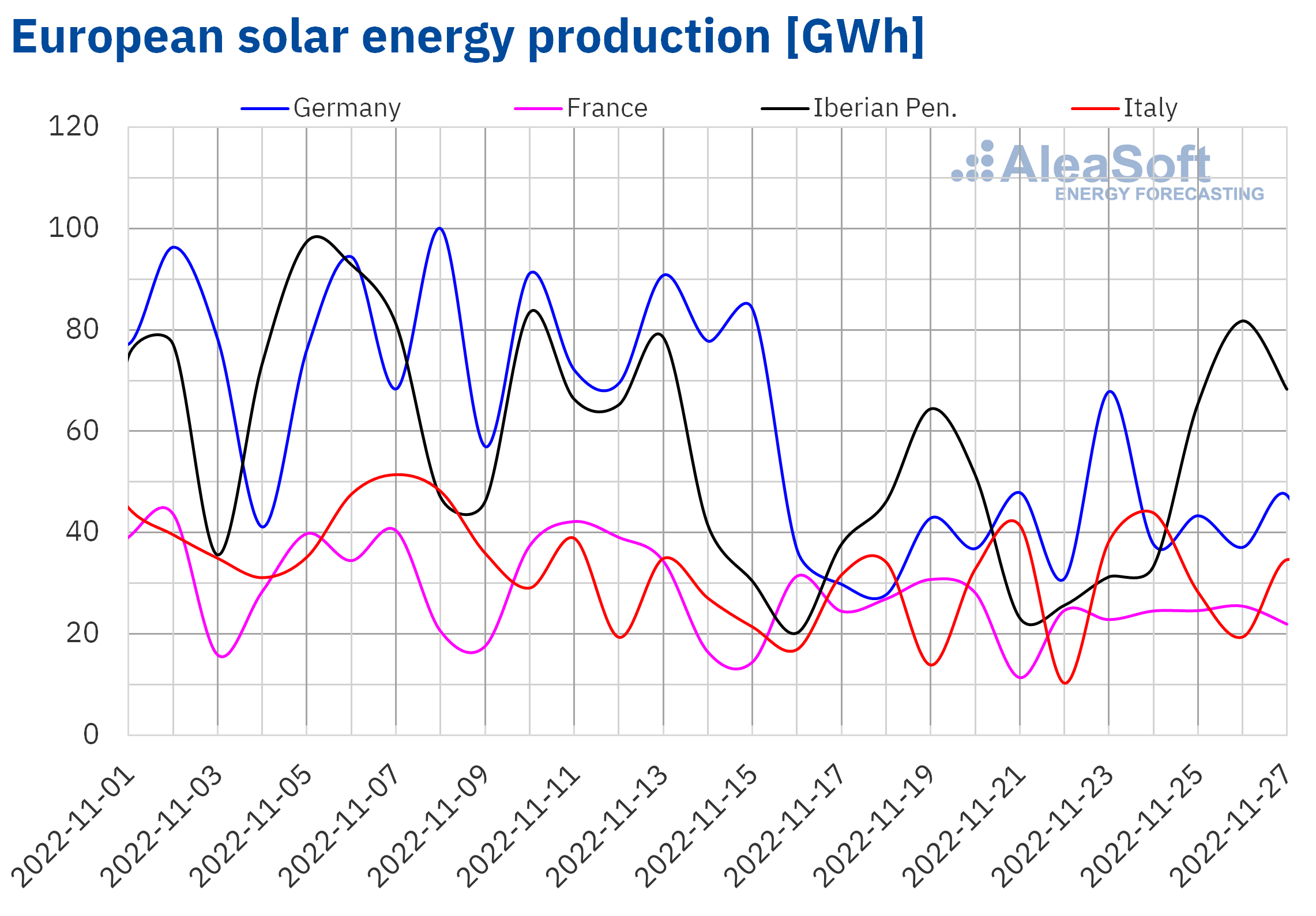 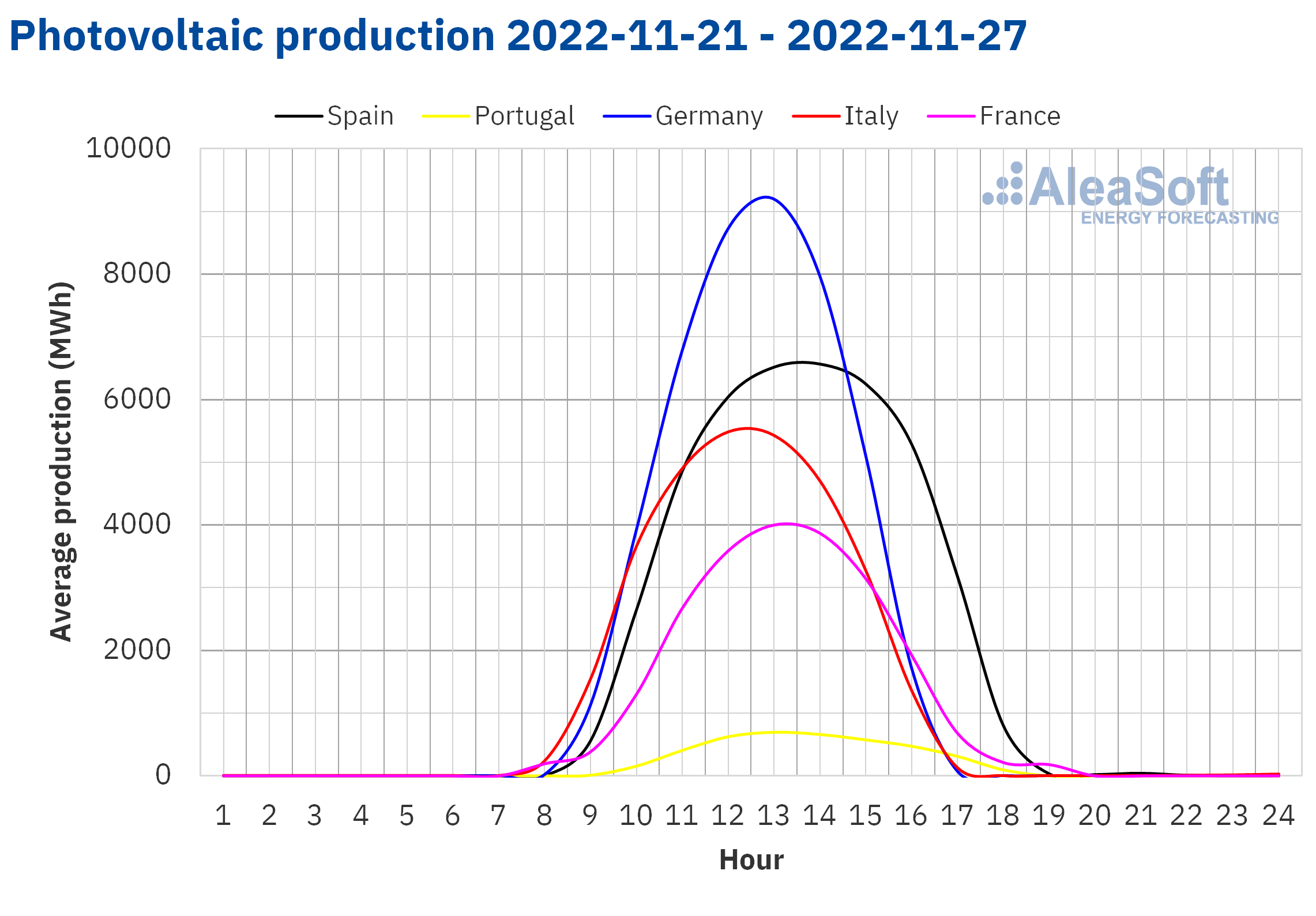 Regarding the wind energy production, in the fourth week of November it registered a heterogeneous behaviour in the markets analysed at AleaSoft Energy Forecasting. On the one hand, it increased in France and Italy, by 7.1% and 16% respectively. On the other hand, in Portugal, Spain and Germany there were decreases of 8.8% in the case of Portugal and 14% in Spain and Germany. In the whole of the Iberian Peninsula the decrease was 13%.

For the week of November 28, the AleaSoft Energy Forecasting’s wind energy production forecasting anticipates a decrease in most of the analysed markets. With the exception of the German market, in general there will be decreases in generation with this technology. 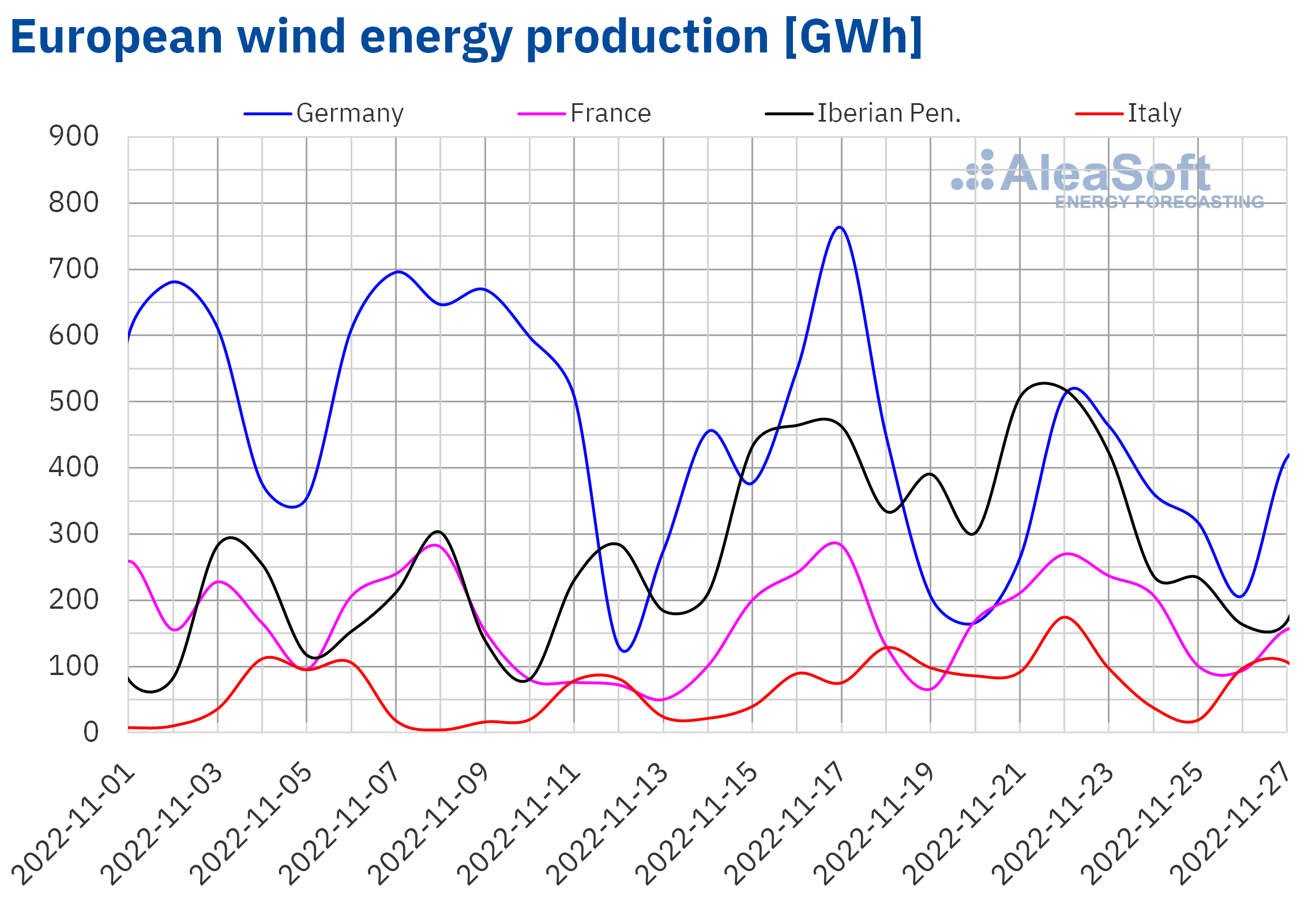 During the week of November 21, the electricity demand increased in most analysed European electricity markets compared to the previous week. The largest increase was registered in the French market, which was 8.9%, followed by the rises of 4.7% in the Portuguese market and 4.5% in the Italian market. In the markets of Spain, Germany and Great Britain, the demand increased by 3.3%, 2.4% and 2.3% respectively. The lowest growth was registered in the Belgian market, being 0.3%. The increases in demand during the week that ended were favoured by the drop in temperatures in most European countries, especially in France and Italy where average temperatures dropped by more than 2 °C.

The exception was the market of the Netherlands, where the demand fell by 1.0% favoured by average temperatures slightly higher than those registered during the previous week.

For the week of November 28, according to the demand forecasting made by AleaSoft Energy Forecasting, it is expected that it will continue to increase in a large part of the European markets. However, the demand is expected to decrease in the German market. 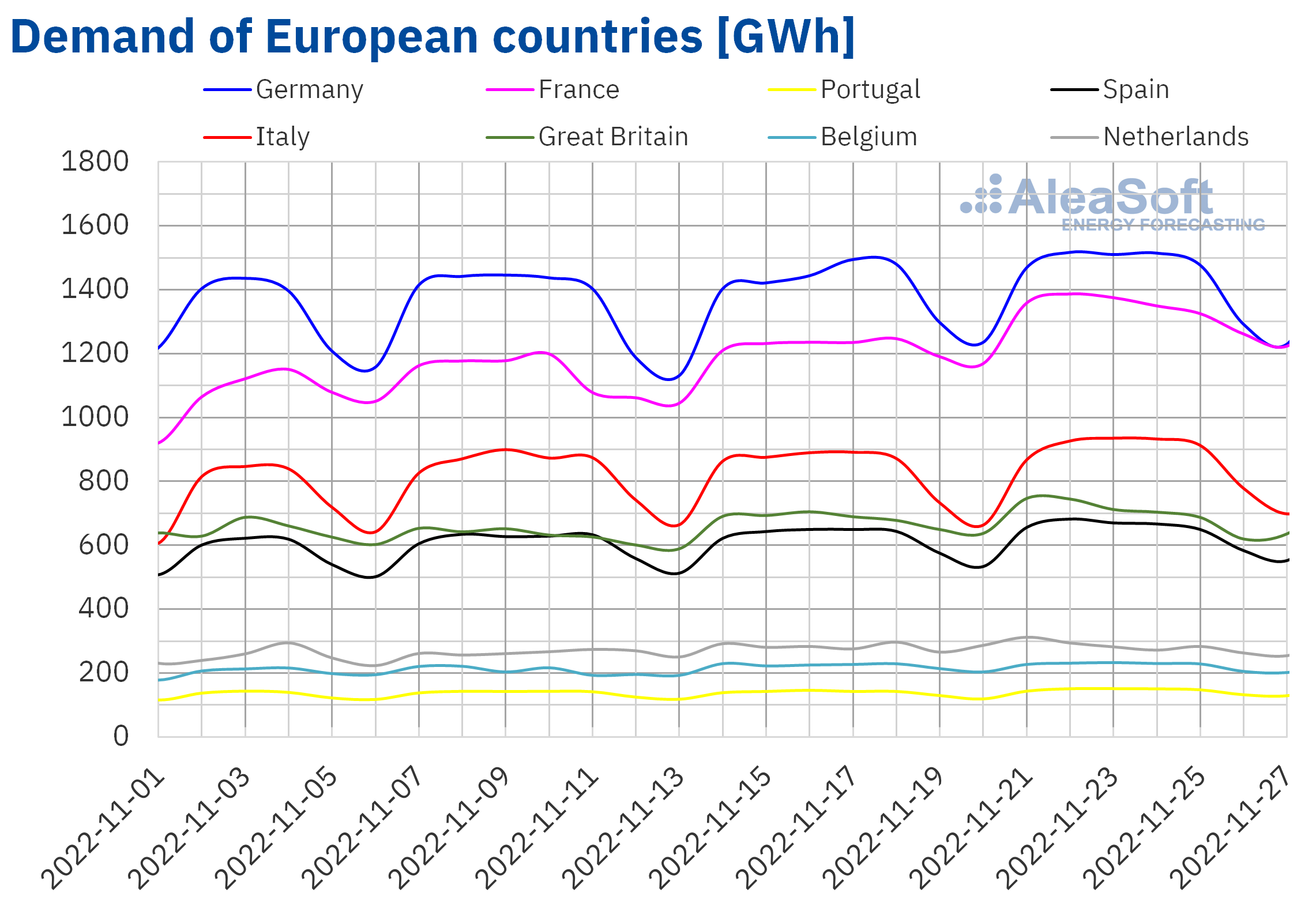 In the week of November 21, prices of all European electricity markets analysed at AleaSoft Energy Forecasting increased compared to the previous week. The highest price rise, of 93%, was that of the Nord Pool market of the Nordic countries, while the smallest increase was that of the IPEX market of Italy, of 7.1%. In the rest of the markets, the increases were between 8.3% of the MIBEL market of Spain and 31% of the EPEX SPOT market of Germany.

In the fourth week of November, the highest average price, of €254.85/MWh, was that of the Italian market. On the other hand, the lowest weekly average was that of the Iberian market, of €110.13/MWh. In the rest of the markets, prices were between €164.77/MWh of the N2EX market of the United Kingdom and €221.85/MWh in the French market.

During the week of November 21, the 15% rise in the weekly average price of TTF gas in the spot market compared to the previous week exerted its upward influence on European electricity markets prices. The increase in CO2 prices, the increase in electricity demand in almost all markets and the decrease in wind energy production in markets such as Germany, Spain and Portugal also contributed to the registered price increases. In addition, in the case of the German and French markets, the solar energy production also decreased. 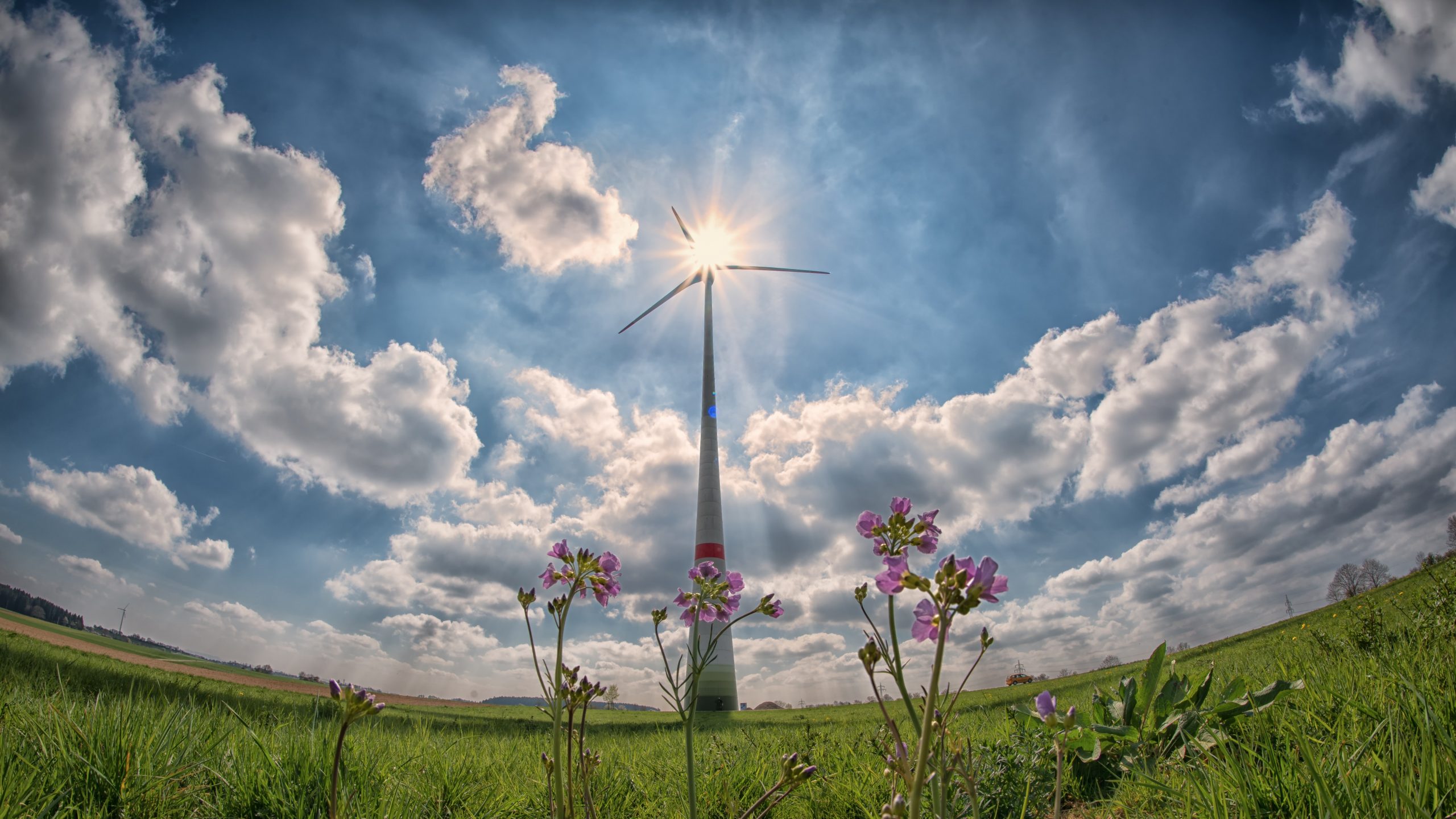 The AleaSoft Energy Forecasting’s price forecasting indicates that in the first week of December prices might continue to increase in the analysed electricity markets, influenced by the increase in demand and the decrease in wind energy production in almost all markets. 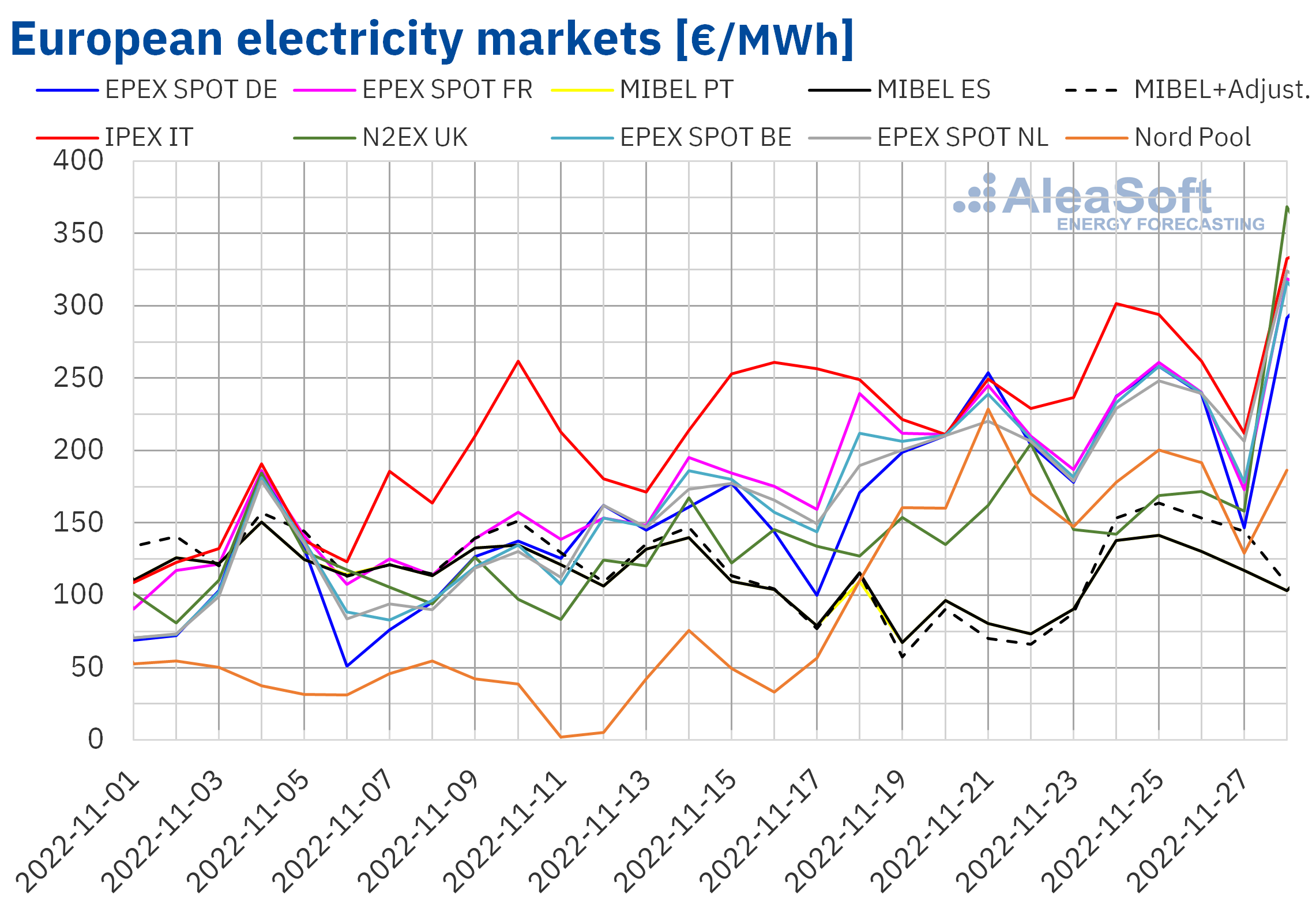 In the fourth week of November, settlement prices of Brent oil futures for the Front‑Month in the ICE market were lower than those of the same days of the previous week and remained below $90.00/bbl. Price declines were registered almost every day of the week. As a consequence of the registered downward trend, the settlement price of Friday, November 25, of $83.63/bbl, was 4.6% lower than that of the previous Friday. In addition, this price was the lowest since January 10, 2022.

The declining evolution of the demand continued to exert its downward influence on Brent oil futures prices in the fourth week of November. On the other hand, the price levels considered by the European Union for a possible limit to the prices of oil from Russia, higher than those proposed by some countries, also contributed to the price declines.

As for TTF gas futures in the ICE market for the Front‑Month, they began the fourth week of November with price increases. As a result, on Wednesday, November 23, a settlement price of €129.62/MWh was reached, 14% higher than that of the previous Wednesday. This price was the highest since October 14. On Thursday prices fell. But, on Friday, November 25, prices increased again and the settlement price was €124.37/MWh, 7.7% higher than that of the previous Friday.

Threats of reductions in gas supplies from Russia and forecasts of low temperatures pushed up TTF gas futures prices in the fourth week of November. However, the recovery in Russian gas flows might lead to a decline in prices at the beginning of the week of November 28.

Regarding CO2 emission rights futures in the EEX market for the reference contract of December 2022, they registered price increases almost every day of the fourth week of November. As a consequence, on Friday, November 25, a settlement price of €78.86/t was reached, 8.8% higher than that of the previous Friday. Prospects of low temperatures contributed to the increase in prices. 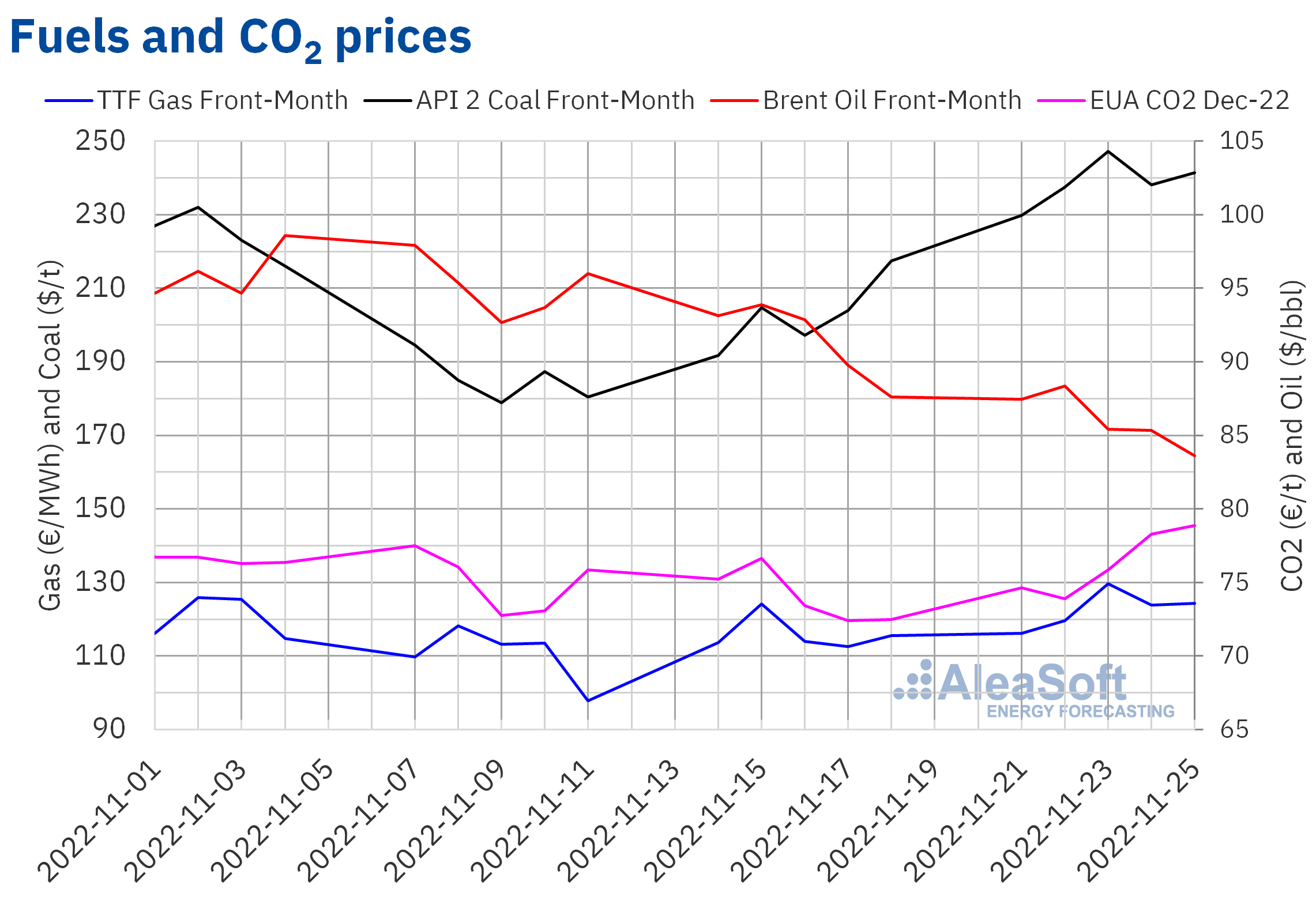 On November 24, the webinar of AleaSoft Energy Forecasting and AleaGreen “Prospects for energy markets in Europe in the 2022‑2023 winter. Renewable energy projects financing: PPA vs. Merchant” was held. The webinar analysed the evolution of European energy markets in recent weeks, as well as the prospects in the mid‑ and long‑term. The current affairs of financing and valuation of renewable energy projects were also analysed, making it clear that the financing of renewable energy has opened to new options. Clients of AleaSoft Energy Forecasting and AleaGreen can request the recording of the webinar on the company’s website.

The next webinar and workshop, which will be the last of this year 2022, will be held on December 15. This edition will analyse the evolution of European energy markets and the long‑term vision of the future, in 2050. The use of tools such as mid‑term hourly price curves simulations for the risk management and for detecting business opportunities, long‑term price forecasting for the renewable energy assets valuation for PPA and audits, as well as Alea Energy DataBase (AleaApp) for the compilation, visualisation and analysis of energy markets data will also be explained.