AleaSoft, July 4, 2019. AleaSoft analyses the behaviour of the MIBEL electricity market of Spain and Portugal in June and between July 1 and 4. In this last period, the average price increased with respect to the same days of last week. Although renewable energy production of wind and solar energy increased, the decrease in nuclear and hydroelectric energy production, together with the increase in the electricity demand and the production with combined cycles pushed prices upwards.

In the first four days of July, the average price of the MIBEL electricity market of Spain and Portugal was 2.9% higher than in the first four days of last week, standing at 50.29 €/MWh. This increase occurs despite the fact that in the first three days of this week the wind and solar energy production in Spain was higher than the average of last week, 24% and 8.4% respectively. According to the analysis carried out by AleaSoft, where the values of the first three days of this week are compared with the same days of last week, the factors that led to the increase in prices are the increase in electricity demand, of 8.2%, the decrease in nuclear and hydroelectric energy production, of 5.8% and 9.0% respectively, and the increase in the production of gas combined cycles and coal power plants, technologies that generally submit market offers with higher prices, of 11% and 58% respectively.

Regarding the whole month of June 2019, the MIBEL market had an average price of 47.19 €/MWh in the case of Spain and 47.21 €/MWh in the case of Portugal, prices 2.5% and 3.1% lower than in May this year, and 19% lower than in June last year. In fact, the monthly average price of the month of June just concluded is the lowest since May last year. During the first half of 2019 the prices of the Iberian electricity market were falling mainly due to the decline in gas and coal prices and the increase in renewable energy production.

In June, the gas combined cycles ranked first in terms of the amount of electricity produced in mainland Spain, with 5168 GWh, something that had not happened since June 2011. The second place was for the nuclear energy, with 4672 GWh produced in June, followed by the wind energy, with 3173 GWh, which moves to the third place after being the technology that produced the most in the Spanish mix in May. The hydroelectric and coal were the technologies that registered the greatest year-on-year decreases in their production in June, of 57% and 81% respectively. The solar photovoltaic and solar thermal energy production as a whole had a significant year-on-year increase in the last ended month, of 27%, driven by solar thermal which increased by 48%.

Returning to the analysis of the first week of July and now focusing the analysis at the European level, not all the analysed electricity markets behaved in the same way when the average price between July 1 and July 4 is compared to that of the first four days of last week. The prices rose in the MIBEL market, the EPEX SPOT market of France and the IPEX market of Italy, the latter being the one with the highest increase, of 12%. In the rest of the EPEX SPOT markets, in the Nord Pool market of the Nordic countries and in the N2EX market of Great Britain, the prices fell, the latter being the one with the greatest decrease, of 14%.

The analysed European electricity markets continue this week of July 1 divided in two groups according to their price. In the group with the lowest prices, the EPEX SPOT markets of Germany, France, Belgium and the Netherlands were very aligned with values over 30 €/MWh, and the Nord Pool market had daily prices around 3 €/MWh below the daily price of the rest of the group, positioning itself as the one with the lowest price so far this week. The group of markets with higher prices was a little more disaggregated, with IPEX at the top with prices above 60 €/MWh, followed by MIBEL with prices around 50 €/MWh and finally N2EX with prices around 44 €/MWh. 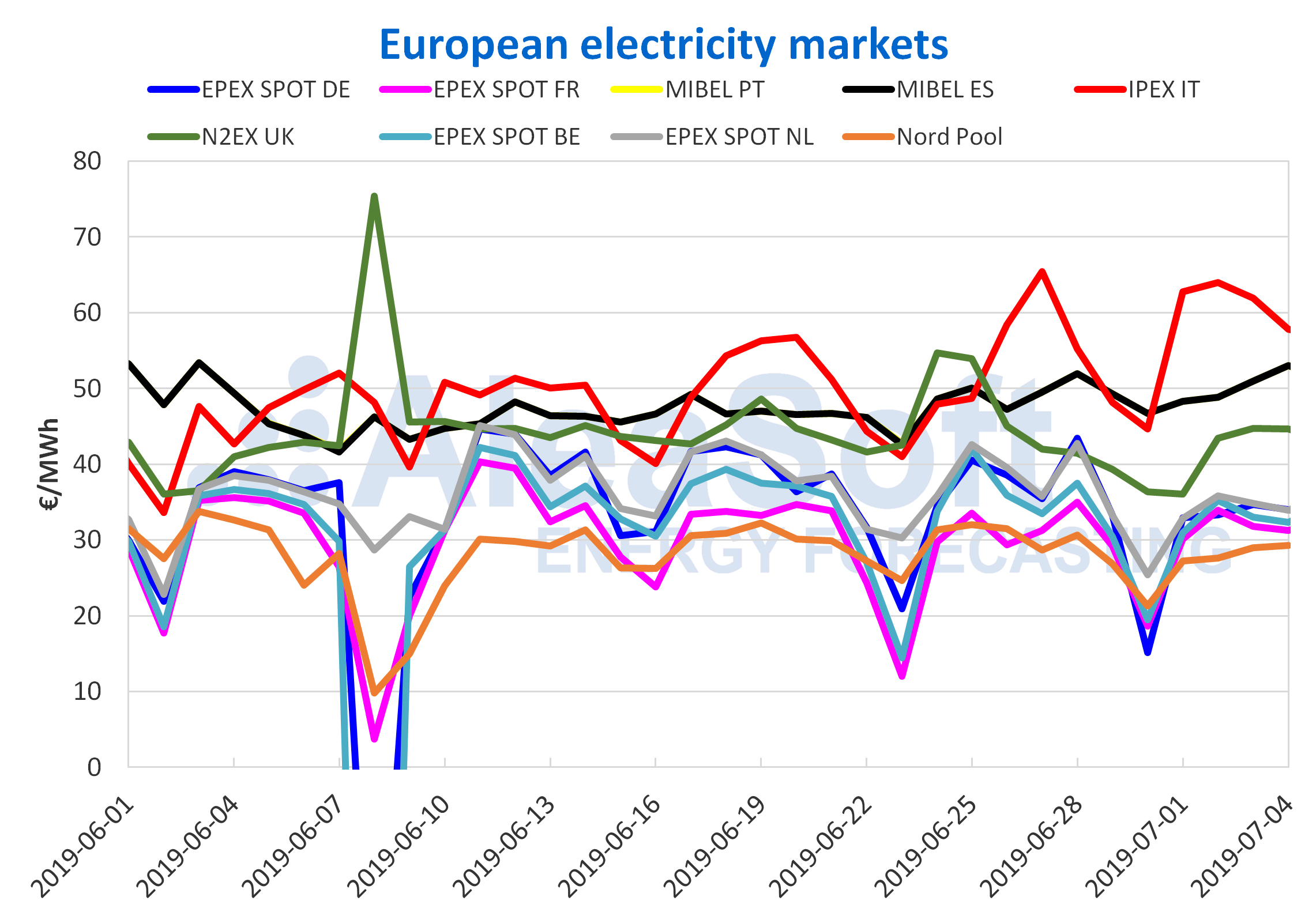 The Brent oil futures prices for the month of September in the ICE market suffered a drop on Tuesday, July 2, of 4.1% compared to the previous day, settling at 62.40 $/bbl. Yesterday, Wednesday, July 3, they recovered and settled at 63.82 $/bbl. This week the main factors that conditioned this market were the decline in US crude inventories, although it was lower than expected, the OPEC+ agreement to extend production cuts until March 2020 and the agreement reached last weekend between the president of the United States Donald Trump and his Chinese counterpart Xi Jinping to resume trade negotiations between their respective countries.

The TTF gas futures on the ICE market for the month of August slightly recovered earlier this week, after continuing to trade downwards for a long period of time, settling on Monday, July 1, 2.5% above the settlement price of Friday, June 28. However, after this rise, they returned to the downward trend for the rest of this week.

The prices of the API 2 coal futures in the ICE market for the next month of August have been trading downwards since October 2018, equalising on Thursday, June 27, the minimum of the last two years at 51.55 $/t, that was already reached on June 19. Earlier this week they recovered and, on Wednesday, July 3, they settled at 54.30 $/t.

The CO2 emission rights futures prices in the EEX market for the December 2019 reference contract remain stable this week around 27 €/t.

The electricity futures of Spain in the OMIP and EEX markets, as well as those of Portugal in the OMIP market, for the fourth quarter of 2019 remain with little variation since the week of Monday, June 24, and ended on July 3 with a settlement price 0.1% higher than the said Monday.

The electricity demand in mainland Spain fell by 1.4% year-on-year in the last month of June. According to data from REE, if the temperature and working patterns effects are corrected, the reduction was of 2.9%. So far this week, the demand increased by 8.2% compared to the period from June 24 to 26. According to the analysis carried out by AleaSoft, when the effect of the regional holiday on June 24 is corrected, the growth in demand was 6.8%. This week temperatures are somewhat higher than last week, which has favoured the increase in electricity demand.

The wind energy production increased by 24% from Monday to Wednesday this week compared to the average of last week. For the next week AleaSoft´s forecasts indicate an average production with this technology similar to this week.

Recently, the Ascó II nuclear power plant had an unscheduled outage from July 1 to 2, due to the shutdown of the main turbine alternator by a high temperature signal in one of its phases, as reported by the Nuclear Safety Council (CSN, by its acronym in Spanish). In this context, nuclear energy production decreased by 5.8% from Monday to Wednesday compared to the same days of the previous week.

The hydroelectric energy production fell by 9.0% so far this week compared to the first days of last week. 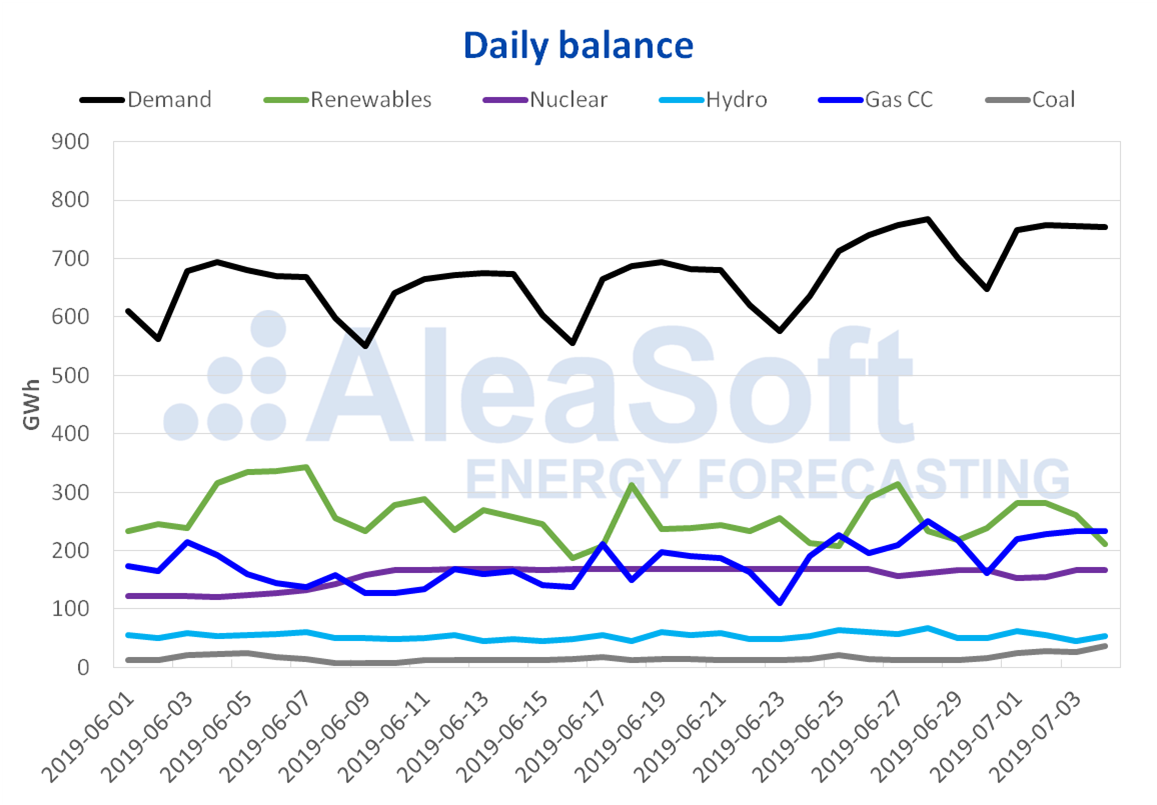 The hydroelectric reserves are currently at 11 807 GWh, 228 GWh less than last week, which represents 51% of the total capacity, according to the latest Hydrological Bulletin of the Ministry for Ecological Transition.

PrevAnteriorThe electricity market MIBEL with decreasing prices in the first half of 2019, in line with the rest of Europe
SiguienteEurope’s electricity markets move at a different pace during the last weekNext
Menu
Facebook-f Twitter Linkedin Instagram