AleaSoft, July 8, 2019. AleaSoft analyses the prices in the fuel markets, CO2 emission rights, European electricity markets and production with renewable energies during the first week of July. In that week, the European electricity markets moved at a different pace: in the markets of the center-south of Europe the prices increased with respect to the last week of June and in the markets of the countries located further north the prices fell.

The Brent oil futures prices for the month of September in the ICE market settled at 64.23 $/bbl on Friday, July 5, after recovering from the fall of Tuesday, July 2, of 4.1% with respect to the previous day. On Tuesday, July 2, the settlement price was 62.40 $/bbl, the lowest of the week. The increase in the United State’s oil production and the risk of a global economy weakening due to the trade war between the United States and China offset the production cuts established by OPEC+, at the same time that the geopolitical tensions between the United States and Iran continue to grow.

The TTF gas futures in the ICE market for the month of August recovered at the end of last week, settling on Friday, July 5, at 11.22 €/MWh after falling almost every day since June 18, with an increase of 11% with respect to the historical minimum price of two years, reached on Thursday, June 27.

The prices of API 2 coal futures in the ICE market for the month of August recovered last week, in parallel to the gas market, after being trading downwards since the third quarter of last year and reaching historical lows of two years at the end of June, settling last Friday, July 5, at 58,25 $/t. 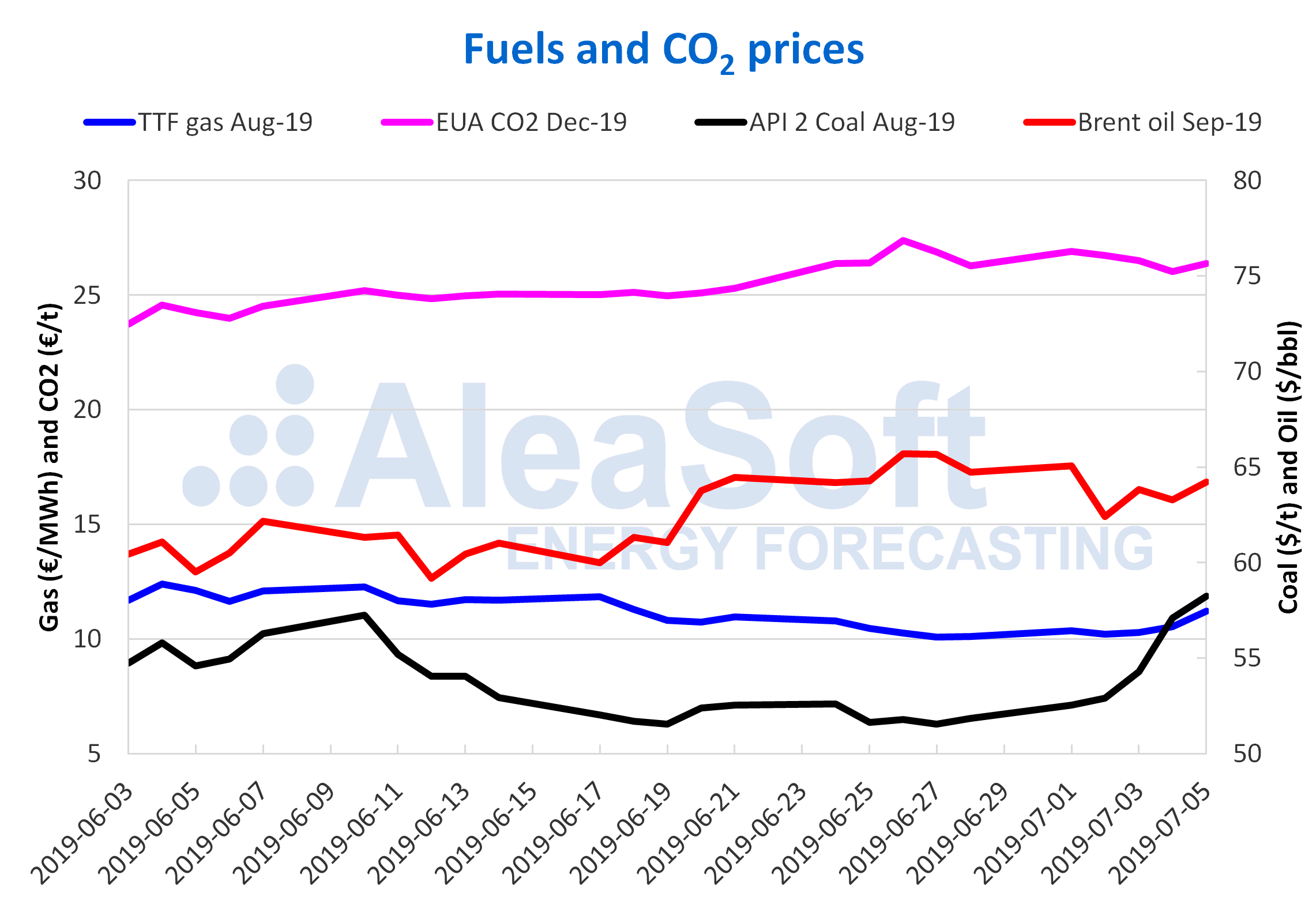 In the first week of July, the average price of the analysed European electricity markets had a disparate behaviour when compared to the last week of June. In the markets of the centre-south of Europe the prices rose. In MIBEL of Spain and Portugal and EPEX SPOT of France, the growth was of 4.4%, and in Italy’s IPEX market, it was of 7.8%. However, the prices fell in the N2EX market of Great Britain, the Nord Pool market of the Nordic countries and EPEX SPOT of Germany, Belgium and the Netherlands, the latter being the one with the greatest decrease, of 8.0%.

The prices of the European electricity futures for the fourth quarter of 2019 settled last week with increases in most markets. The markets of the Nordic countries in ICE and NASDAQ suffered a considerable increase of 3.3% and 3.8% respectively. The futures of Germany in the EEX market increased by 1.0% while those of Italy in the EEX market and those of the UK, the Netherlands and Belgium in the ICE market, settled with a discrete fall between 0.2% and 0.5%. The rest of the markets registered a slight upward variation.

In the case of the European electricity futures for the year 2020, the behaviour of the settlement prices on Friday, July 5, was heterogeneous in the different markets. There stands out the increase of 1.4% in the markets of the Nordic countries in ICE and NASDAQ and the falls of the futures of France and Italy in the EEX market of 1.0% and 1.7% respectively. The rest of the markets settled with a variation from -0.4% to +0.6%.

Last week, the wind energy production had a different behaviour in the European countries. In France it fell by 22%, in Spain by 1.4% and in Italy by 60%. On the other hand, there was a growth in Germany and Portugal, of 38% and 19% respectively. At AleaSoft it is expected that, for this week, France and Portugal will maintain the same trend as last week and that in Germany, Spain and Italy the variations will be opposite to those of last week, that is, in Germany the production will fall and in Spain and Italy it will rise. 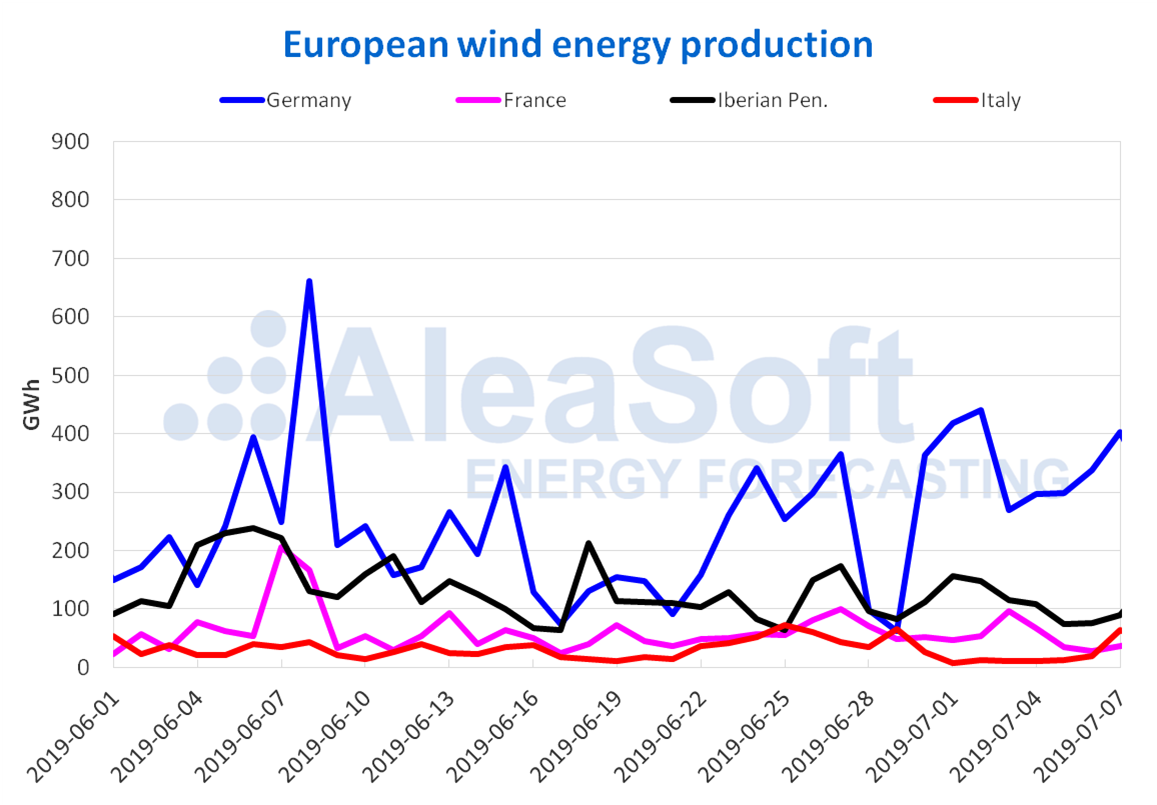 The solar energy production, which includes photovoltaic and solar thermal, in the first week of July was reduced in Germany by 20%, while it increased in proportions close to 2% in both Spain and Italy. For this week, the generation coming from this technology is expected to decrease in these countries. 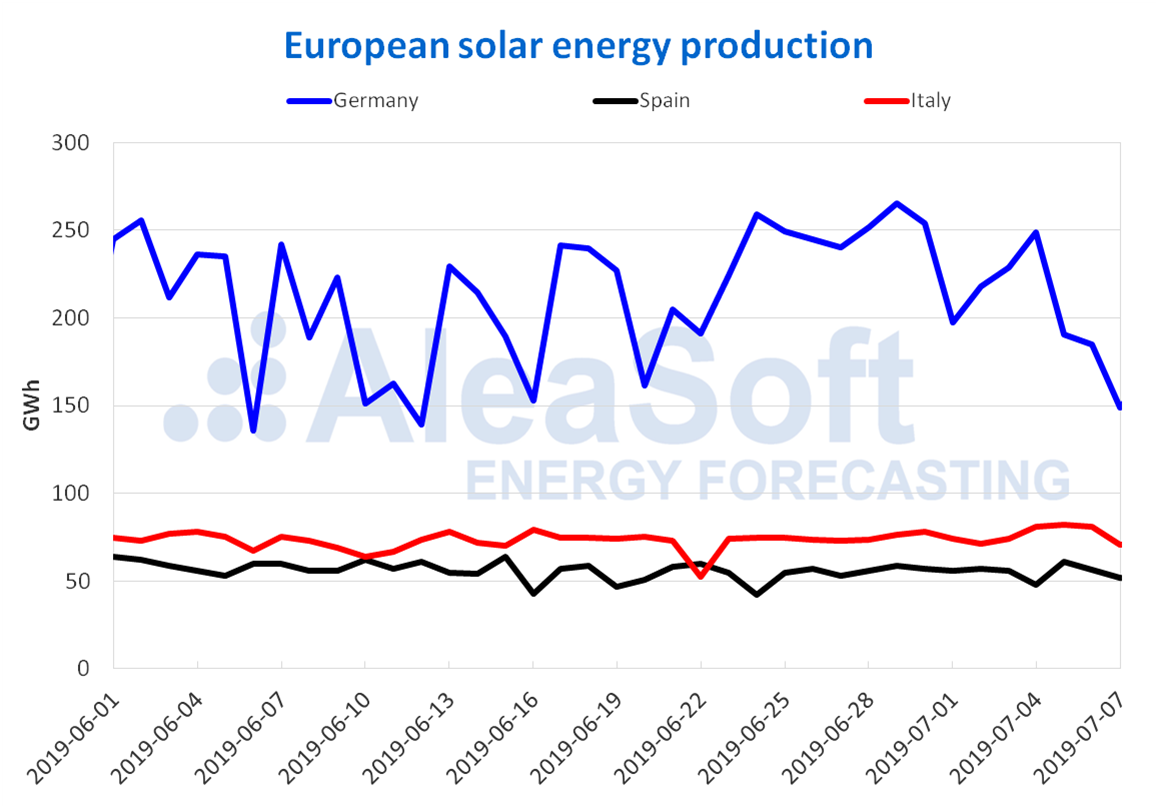 PrevAnteriorMIBEL market price rises this week despite greater wind and solar energy production
SiguientePhotovoltaic and self-consumption: The two most mentioned words in the first half of 2019Next
Menu
Facebook-f Twitter Linkedin Instagram