The prices of the European electricity markets fell except for MIBEL

AleaSoft, May 20, 2019. AleaSoft analyses prices in the fuels markets, CO2 emission rights, European electricity markets and production with renewable energies during last week, May’s third one. The price of Europe’s main electricity markets fell last week, with the exception of the MIBEL market of Spain and Portugal, where the average price rose by 6% compared to the week of May 6.

The prices of Brent oil futures for July 2019 in the ICE market last week maintained an upward trend surpassing 72 $/bbl on Thursday and Friday. This happened after the increase in tensions in the Middle East added to the worrying situation of political instability in Venezuela and the OPEC cuts. For the moment OPEC has not shown signs that it will increase its production to alleviate the problems on the supply side, so in the coming days the price of Brent should continue high.

The price of API 2 coal futures for the month of June in the ICE market settled at 58.90 $/t on Friday, May 17. This is the lowest value for this product at least from April 1, after the prices remained between 60 and 64 $/t.

The price of CO2 emission rights futures in the EEX market for the December 2019 reference contract settled on Friday, May 17, at 25.01 €/t, its lowest value in two weeks. In this market the fluctuations continue in a range between 24.70 €/t and 27.54 €/t, since it was confirmed on April 11 that the Brexit was postponed until October this year. 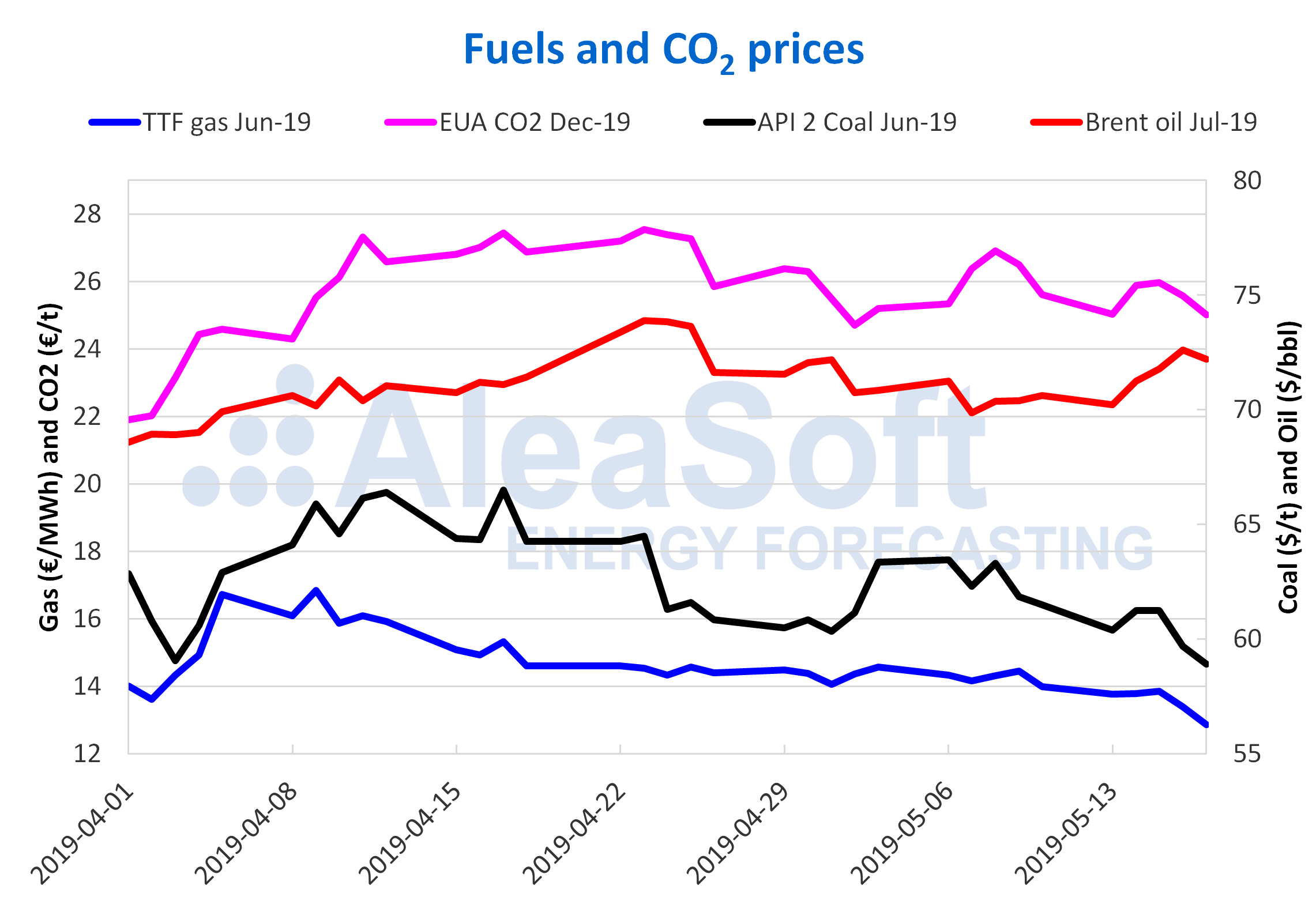 During the past week, which began on May 13, the European electricity markets continued with the relative stability they have experienced since April 1. Last week, in most of the markets the prices fell with respect to the previous week, down to almost 10% in the case of the EPEX SPOT market of the Netherlands. The exception was the MIBEL market of Spain and Portugal, which rose by 6%. The generalised decrease in electricity demand in Europe, due to the fact that in general the temperatures of the continent rose during the analysed period, favoured the decrease in prices. Also the increase of the solar energy production in Germany, of 35%, helped the prices to descent. In the MIBEL market, although Iberian demand fell by 1.0% and solar production in Spain increased by 29%, the increase in prices was due to the decrease in the Iberian wind energy production and nuclear energy production, of 10% in each case. Currently the Spanish nuclear power plants Ascó II and Trillo continue the refuelling shutdowns.

The main European electricity markets last week continued to be divided in two groups according to their price. In the group of markets with higher prices, above 44 €/MWh, are the IPEX market of Italy, the N2EX market of Great Britain, and the MIBEL market. The latter was the market with the highest average daily price in Europe the last two days, May 19 and 20.

In the group with the lowest prices are the EPEX SPOT market of Germany, France, Belgium, the Netherlands and the Nord Pool market of the Nordic countries. During the past week, the average price of these markets was around 40 €/MWh, but in today’s session, May 20, they went up to around 45 €/MWh.

The prices of European electricity futures for the third quarter settled last week, on Friday, May 17, with a generalised fall of between 1.8% and 6.5%. This decrease occurred in parallel with the drop in the price of CO2, gas and coal futures.

In the case of futures for the year 2020, there was also a general decline, except for UK futures in the ICE and EEX markets that increased slightly, by 0.8% and 0.6% respectively, and the MTE market operated by GME that remain unchanged.

Last week, the wind energy production only increased in Portugal, by 5.5%. The drop in the rest of the European markets was greater in Germany and Italy, of 21% and 25% respectively, while in France it fell by 11% and in Spain by 14%. For the current week a recovery of around 20% is expected in the production of Germany and Italy, and a decrease of between 30% and 40% in France and the Iberian Peninsula. 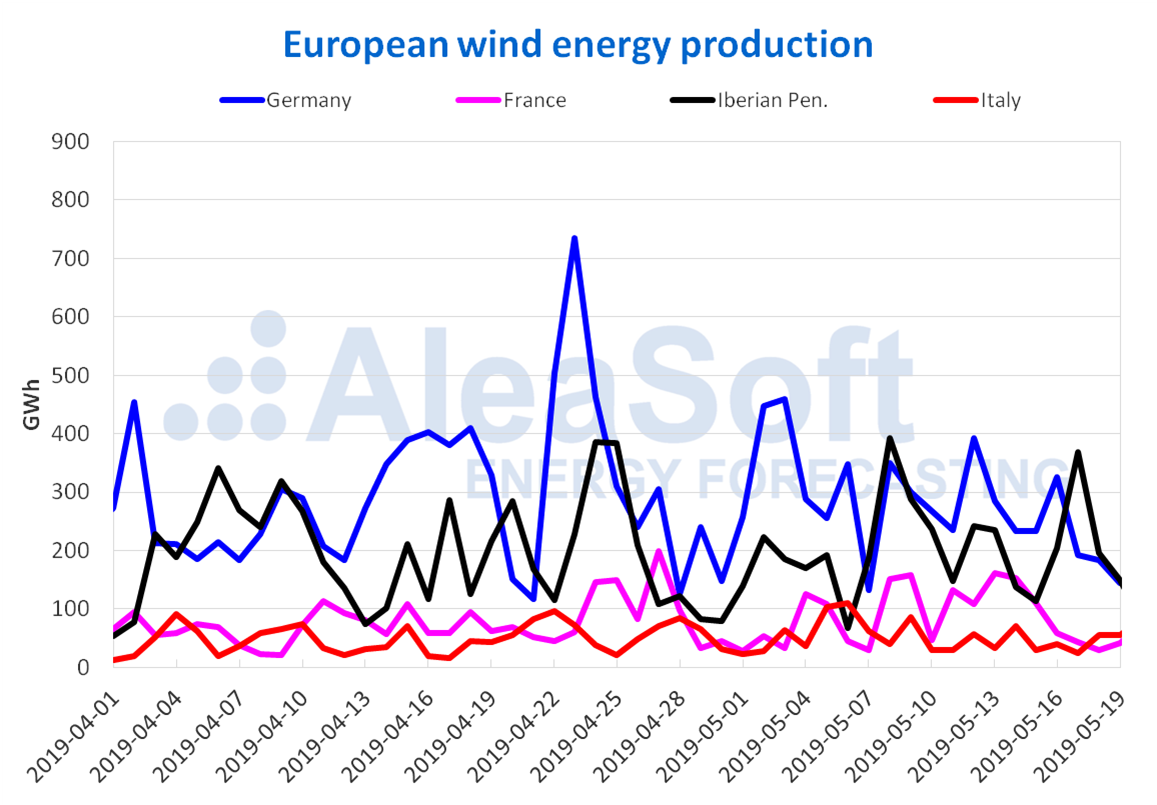 The solar energy production, which includes photovoltaic and solar thermal technologies, behaved differently in Europe. In Germany and Spain it increased by 35% and 29% respectively, while in Italy it decreased by 12%. According to AleaSoft forecasts, solar energy production in Germany and Spain will decrease this week, while in Italy it will remain at values similar to those of last week. 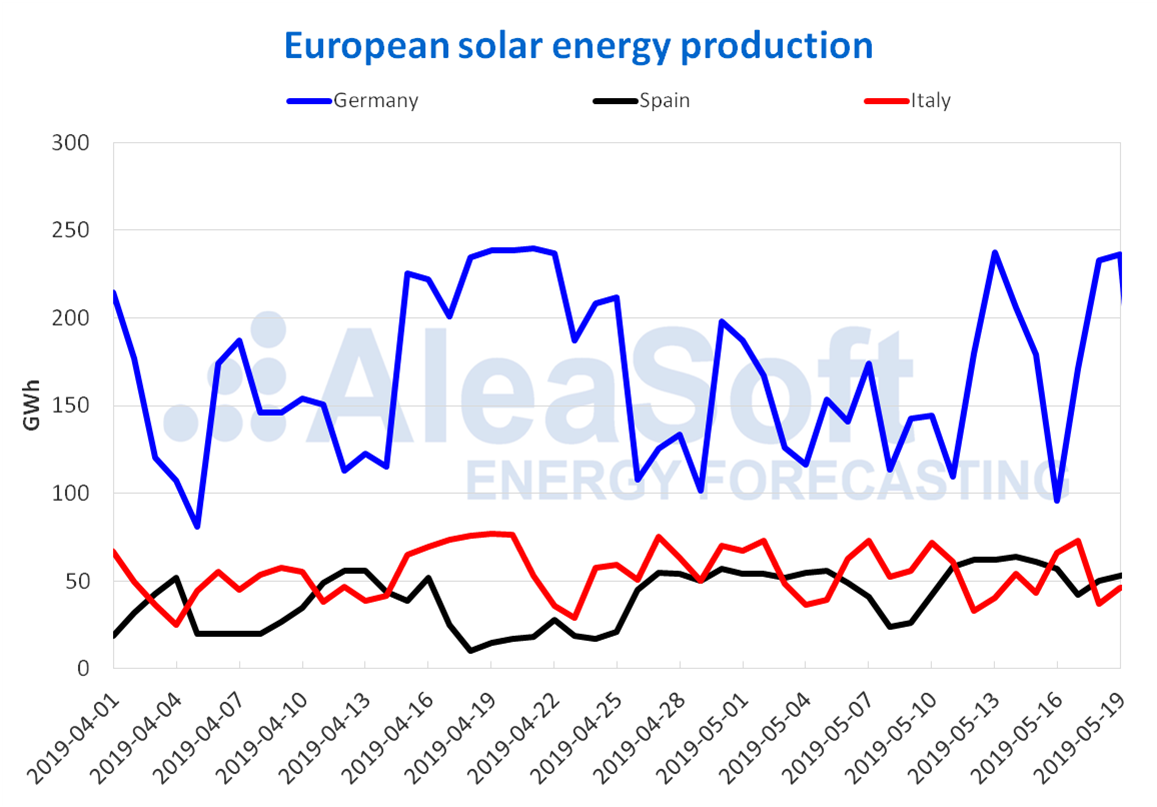 PrevAnteriorMIBEL returns to be protagonist, it is the only European market where prices rise this week
SiguienteAleaSoft at the UNEF technical seminar on the electricity marketNext
Menu
Facebook-f Twitter Linkedin Instagram