AleaSoft, November 28, 2019. On December 2, the UN Climate Change Conference COP25 will begin in Madrid, which will be held until December 13. In this context, this week two reports were published that warn about the increase in greenhouse gas emissions in 2018 and about the need to reinforce measures to approach the moment of maximum emissions and to reach the commitments of the Paris Agreement. For AleaSoft, this data demonstrates the need to decarbonise the electricity sector.

On Monday, November 25, the Greenhouse Gas Bulletin of the World Meteorological Organization corresponding to the observations made during the year 2018 worldwide was published.

The bulletin highlights that the presence in the atmosphere of greenhouse gases due to the human action reached record numbers. The greatest contribution to global warming is that corresponding to the carbon dioxide emissions. It is estimated that the CO2 concentration reached 407.8 ppm during 2018 and that its concentration in the atmosphere is currently 147% higher than that corresponding to 1750, in the pre‑industrial era. They are followed in importance, because of their contribution to global warming, by methane and nitrous oxide, which in 2018 reached 259% and 123% higher levels than those of the pre‑industrial era respectively.

This report also mentions other greenhouse gases that, despite being even less abundant, are also very harmful and their proportion is increasing rapidly. Among these, for example, is sulphur hexafluoride, SF6, whose presence doubled since mid 1990s. This gas is used in the industry as an insulator for electrical equipment.

On Tuesday, November 26, the Emissions Gap Report 2019 of the UN Environment Programme was also published. This report sets out the difference between estimated greenhouse gas emissions by 2030 and those that should be to reach the commitments of the Paris Agreement to prevent the planet’s temperature from rising more than 1.5 °C.

According to this report, despite the political commitments, the increase in greenhouse gas emissions did not slow down in the last decade, but they increased by approximately 1.5% annually. For this reason, to achieve the acquired commitments, more significant reductions will be necessary and in a shorter period of time.

In the case of the European Union, among other things, the gradual elimination of the coal‑fired power plants and taking the necessary measures to completely eliminate carbon from the electricity supply between 2040 and 2050 are recommended.

Emissions from the electricity sector

The electricity sector is key to reducing the greenhouse gas emissions. According to data from the International Energy Agency, the worldwide emissions due to the electricity generation account for about 40% of total CO2 emissions from fossil fuel use.

According to Eurostat data, in the European Union, the greenhouse gas emissions from fossil fuel use in the energy sector decreased by 29% between 1990 and 2016. Within this sector, 86% of the emissions correspond to the generation of electricity and heat. The decrease in emissions of the energy sector was possible thanks to the increase in the presence of the renewable energies and the use of natural gas for electricity generation instead of other more polluting fossil fuels such as coal, together with the increase in energy efficiency. The use of renewable energies in the electricity generation tripled since the beginning of the century, with the wind energy being the one that increased the most in these years. As approved in the 2021‑2030 Energy and Climate Change Policy Framework, the objective of reduction of the greenhouse gases of the European Union by 2030 is at least 40% compared to the 1990 emission level, so measures must be taken to progressively expand the weight of renewable energy in the electricity generation, with the objective of reaching at least 27% of renewable energy by 2030.

On the other hand, despite the positive data on reducing emissions in the European Union in recent years, Spain is one of the few countries of the European Union that in the period from 1990 to 2016 increased its greenhouse gas emissions. The increase in emissions corresponding to the energy sector was more than 30 million tons in this period. For this reason, it is important to adopt the necessary measures to reduce the country’s emissions. Even so, the increase in production with renewable energies also reduced CO2 emissions associated with electricity generation. According to data from Red Eléctrica de España, it went from being above 110 million tCO2 in 2007 to less than 65 million tCO2 in 2018.

To reduce its emissions, in the Integrated National Energy and Climate Plan (NECP) Spain set itself the objective of reaching 100% of the electricity generation with renewable energy by 2050 and thus avoiding emissions related to this sector. This is intended to complement with an increase in electrification in the transport sector. 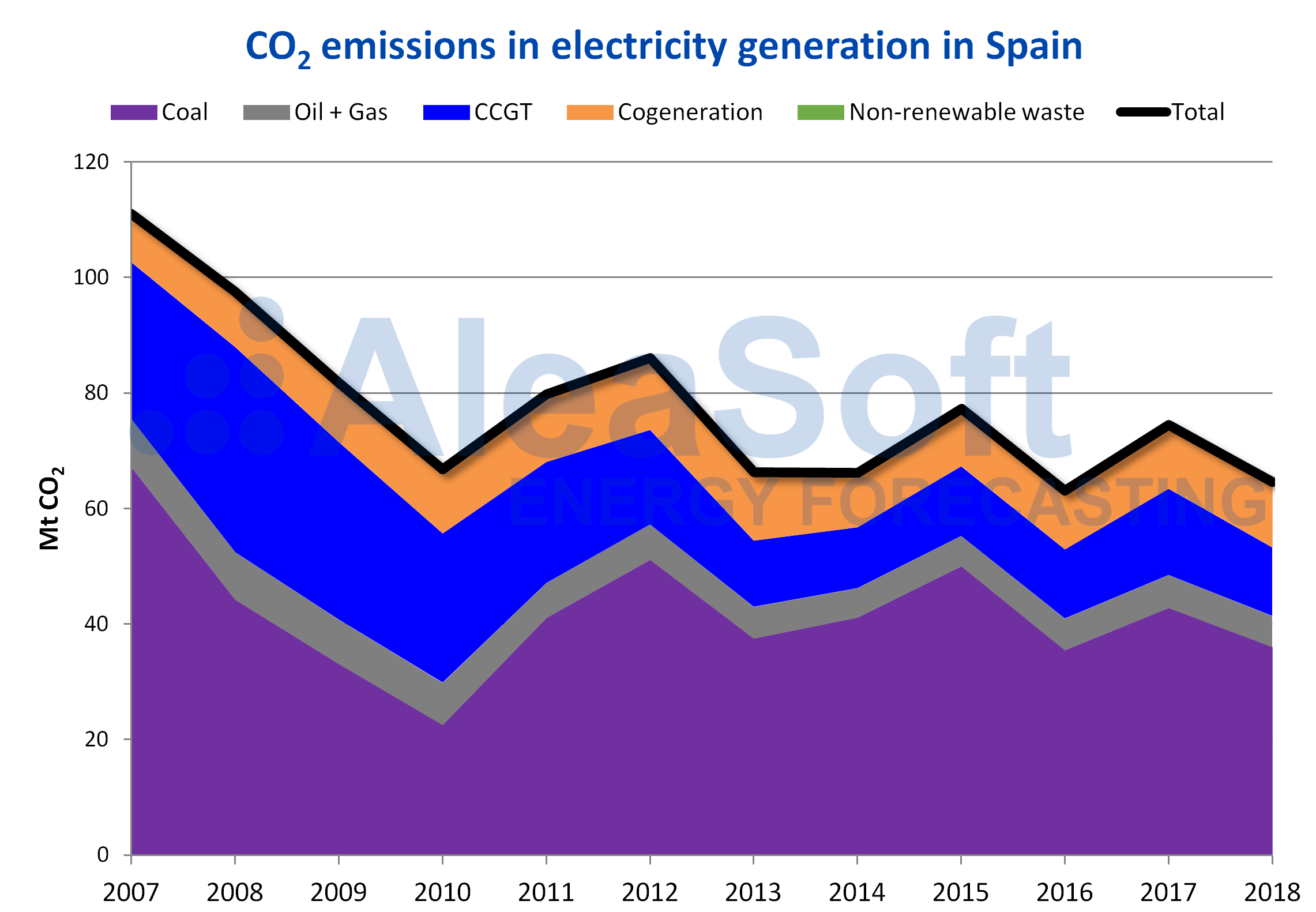 For AleaSoft, these data demonstrate the importance of continuing to work on the decarbonisation of the electricity sector. We must continue working to promote the Photovoltaic Revolution and to increase the installation of more capacity from other renewable energies such as wind energy. The change must be done in Spain and in Europe, but we must also extend it to the rest of the world. The COP25 will be an opportunity to raise awareness and join efforts on a topic as fundamental as the future of our planet.

The UN Climate Change Conference COP25 will be held in Madrid between the next December 2 and 13. More than 25 000 people from 200 countries are expected to attend, including heads of state and government, scientists and businessmen.

Taking into account the aforementioned reports, at this summit meeting it is imperative to agree measures for the reduction of greenhouse gas emissions, such as carbon dioxide or methane, to reduce the rate of global warming, while it is also necessary to reach commitments that allow improving the air quality.

The UN hopes that at this summit meeting the participating countries will commit to revise their plans of cuts in greenhouse gas emissions upwards with the aim of curbing the progress of the climate change.