AleaSoft, November 26, 2019. Last week, the solar and wind energy production fell in most of the European continent. The prices rose in almost all electricity markets due to higher electricity demand, the nuclear shutdowns in France and the decline in renewable energy production. The prices are expected to fall this week as temperatures will be higher and the wind and solar energy production will increase in several markets, which will slow the upward trend of recent weeks. 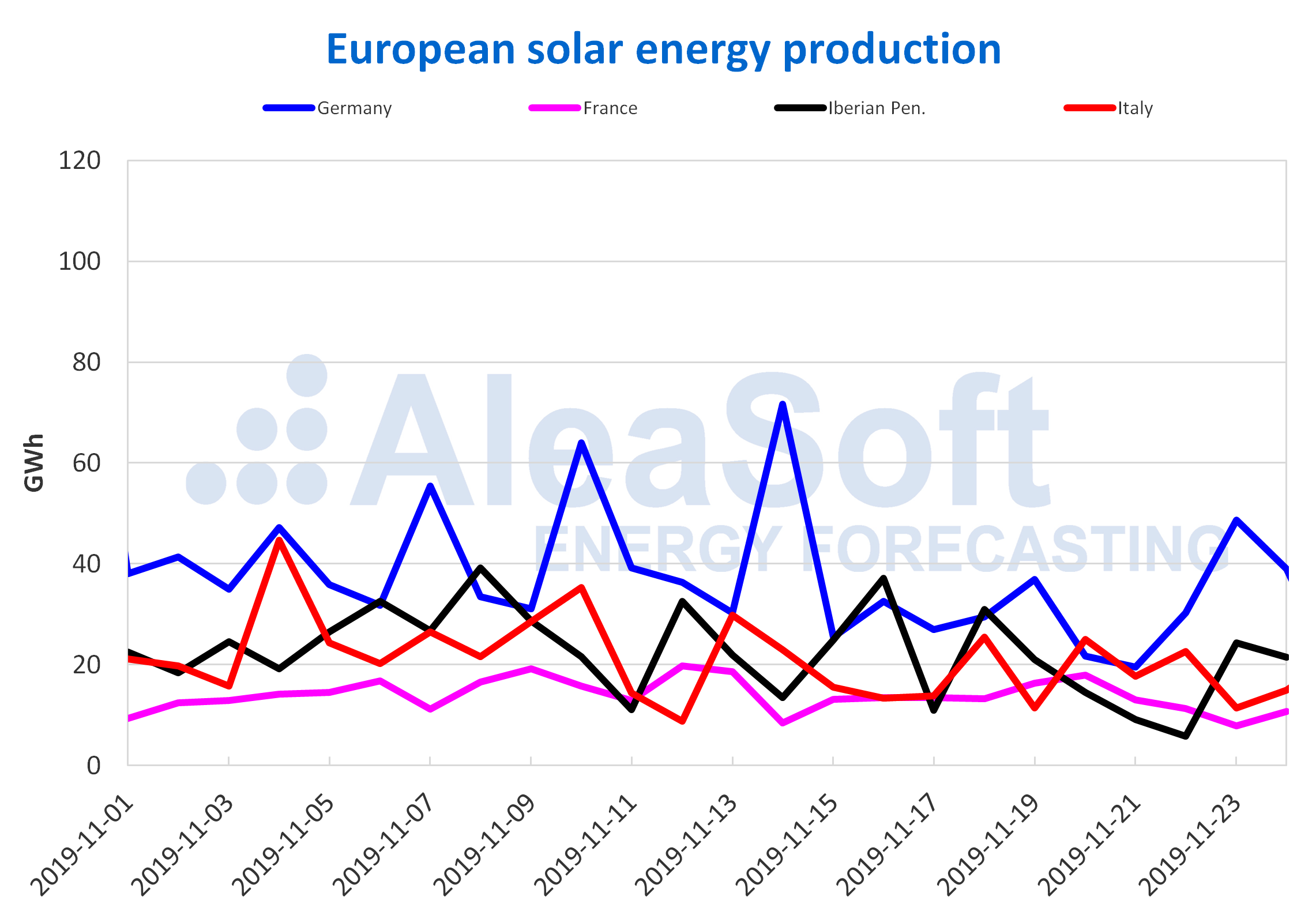 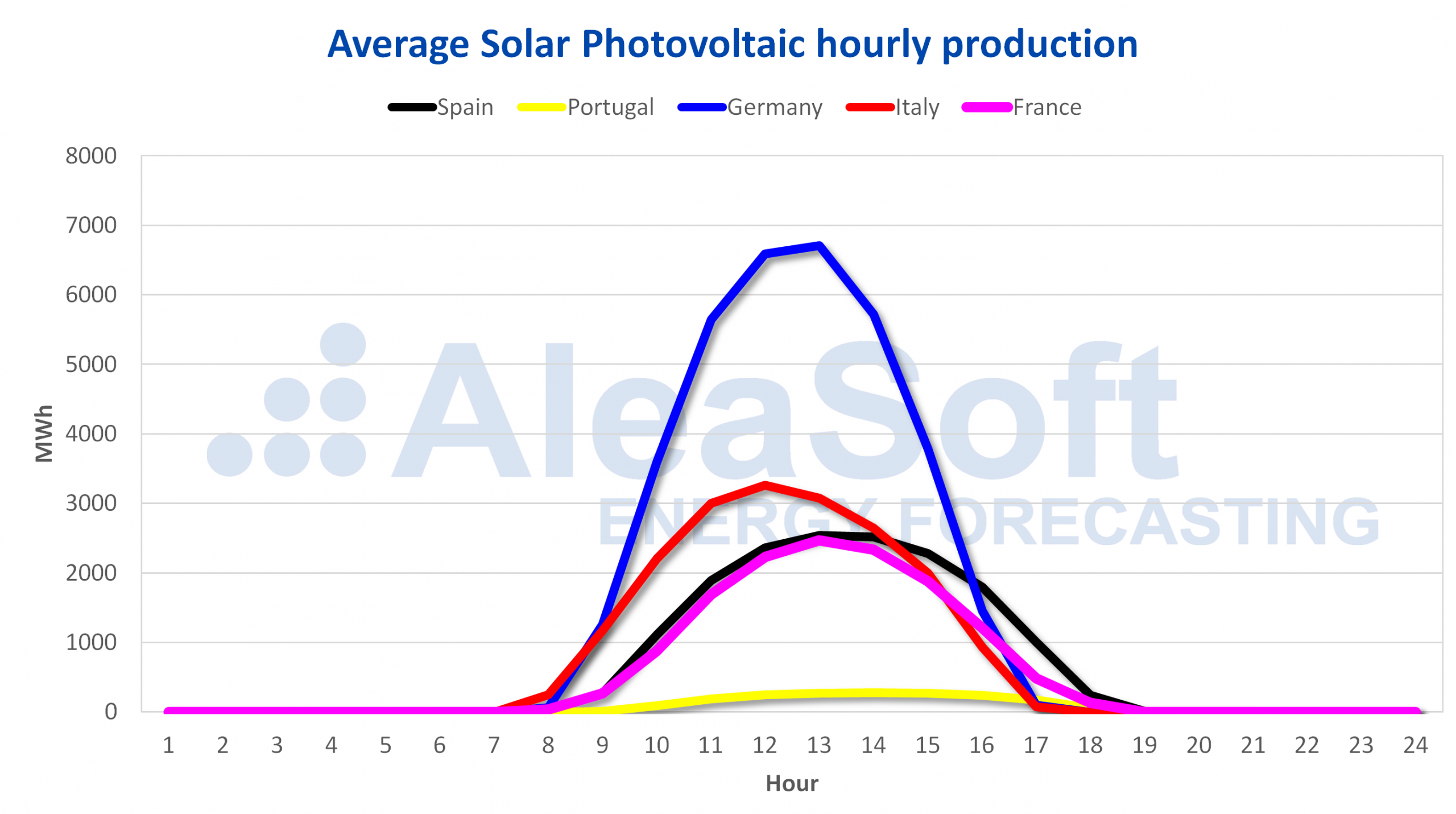 During last week, the wind energy production decreased in most European markets compared to the previous week. In Italy, the production with this technology decreased by 31%, while in Portugal, Germany and Spain it fell between 29% and 9.9%. The only market exempt from this decrease was the French market, with a production 8.3% higher than that of the week of November 11. For this week, at AleaSoft the wind energy production in Germany, France and Spain is expected to increase, while for Italy it is expected to continue decreasing.

The wind energy production during this month of November was superior in all European markets, compared to the same days of November 2018. In Italy it continues to be much higher, with a production above double that registered last year, in a 143%. The production in the Iberian Peninsula that increased by 59% also stands out. For France and Germany the increase was 17% and 1.0% respectively. 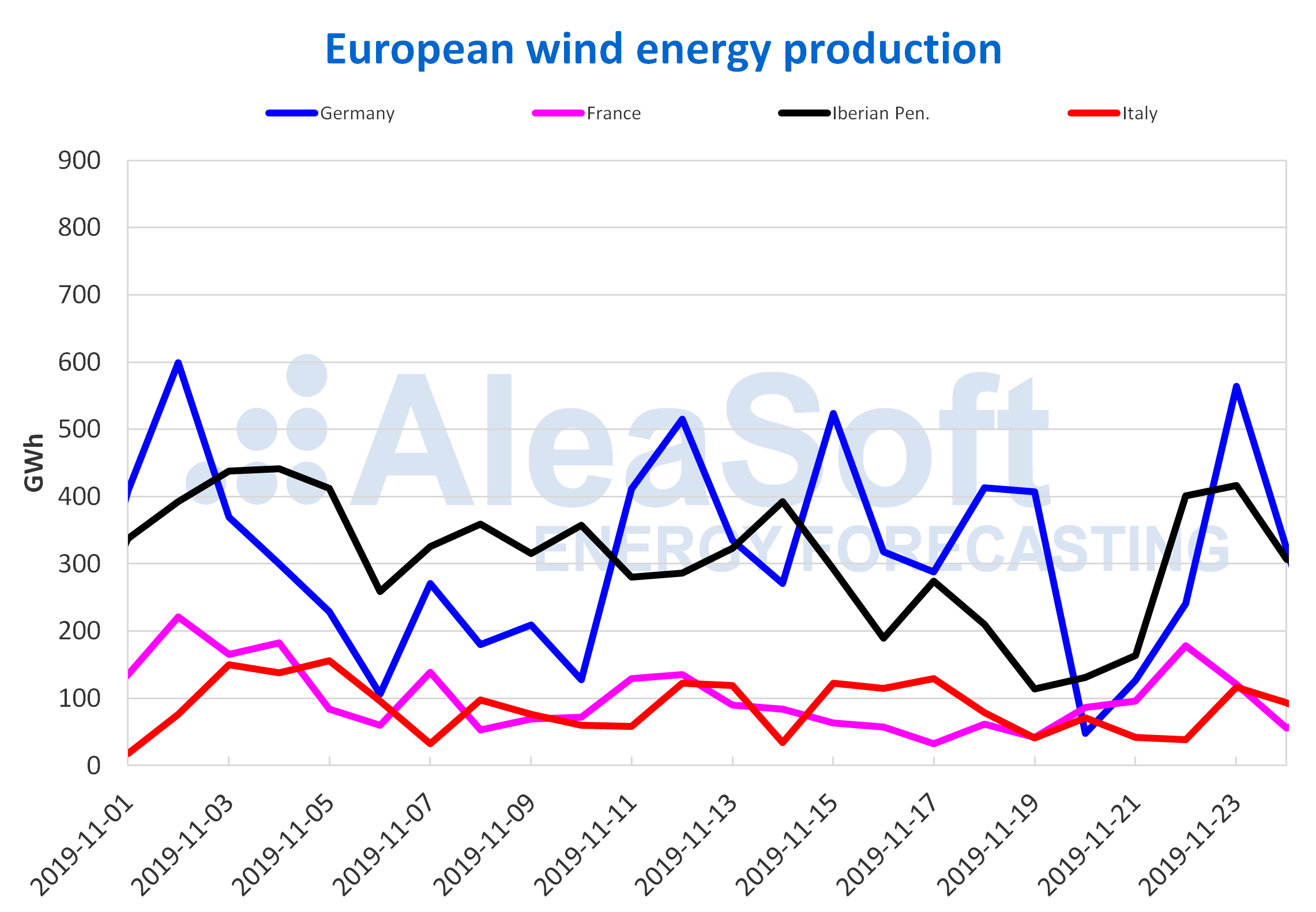 During the past week, Portugal’s electricity demand remained with little variation, compared to the week of Monday, November 11. On the contrary, in the rest of the European markets there were increases of between 1.0% and 5.3%. At AleaSoft the electricity demand in Italy, France and the Iberian Peninsula is expected to reduce during this week as average temperatures rise. 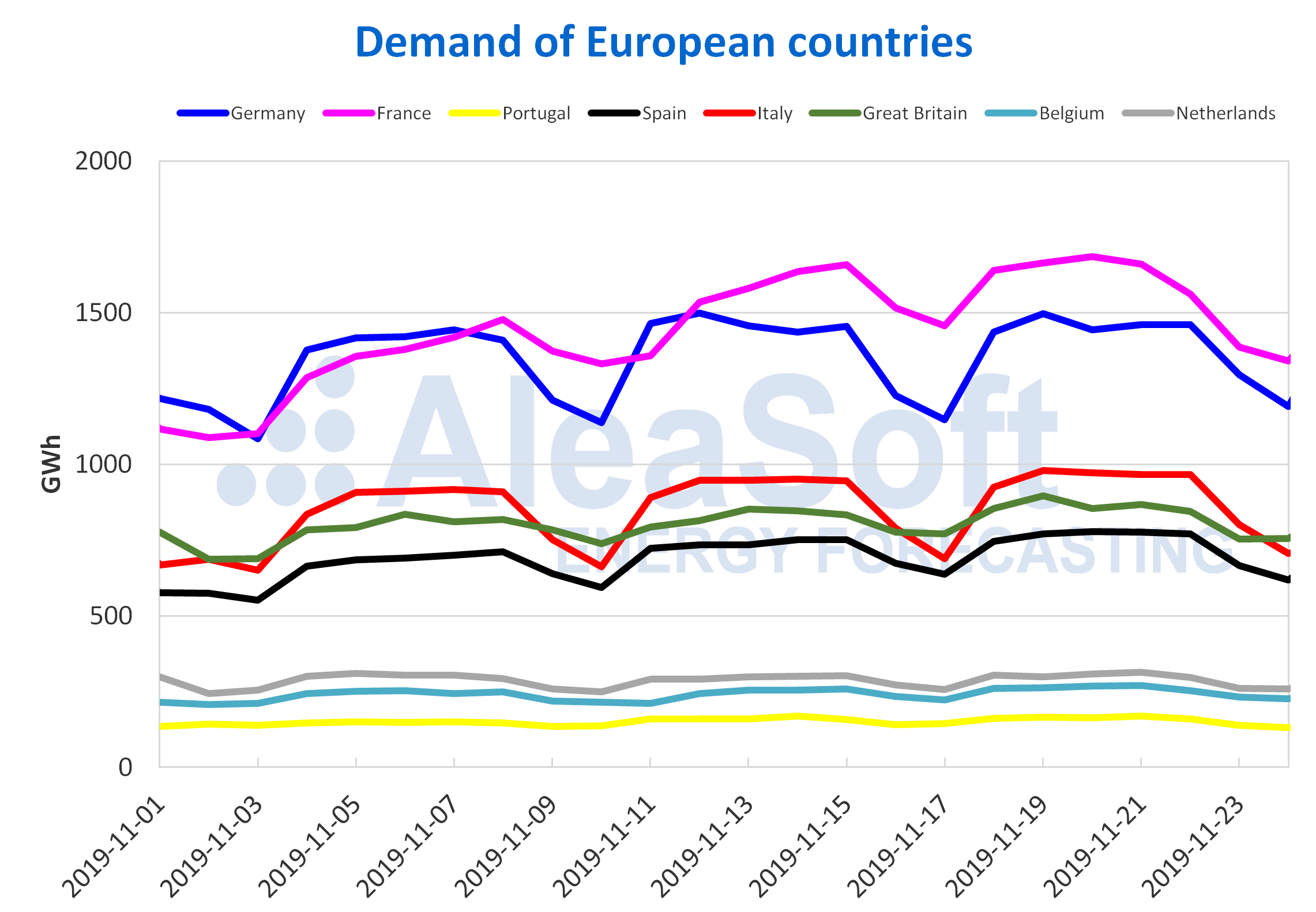 During the past week of November 18, the prices of most European markets were higher than those of the previous week, of November 11. This increase was mainly due to the behaviour of the markets in the first days of the week, in which there was a high electricity demand due to lower temperatures, together with lower renewable energy production and the nuclear shutdowns in France.

In general, the arrival of warmer temperatures and stronger winds since Friday, November 22, lowered the electricity price in practically the entire continent during the weekend compared to the previous weekend. The exception in this behaviour is the N2EX market of Great Britain and the EPEX SPOT market of the Netherlands.

The prices of the EPEX SPOT market of France, which made the news during last week for being the highest in Europe during the first four days, fell at the end of the week thanks to the increase in temperatures and wind energy production, together with the lower electricity demand on weekends. At the end of the week, the average price of the French market, of €52.21/MWh, was the third highest in Europe, behind the N2EX market of Great Britain and the IPEX market of Italy. There is still no news of the return to operation of the nuclear reactors stopped at the Cruas power plant.

When making a comparison with respect to the days of the equivalent week of 2018, last week’s prices were lower every day in all analysed markets. Fundamentally the difference in the EPEX SPOT market of Belgium is remarkable, since by this time of 2018 the country was in the uncertainty of possible nuclear stops that triggered the market price at astronomical figures. Specifically, on November 21, 2018 at hour 19 the price was set at €499.36/MWh, to finally average a daily price of €184.86/MWh. For Belgium, this is the highest hourly price of the last three years and the highest daily price of the last four years.

Based on the settlement price of yesterday, Monday, November 25, heterogeneous differences are observed with respect to the previous Monday. The cases of Germany and the Netherlands are notable, with €9.76/MWh and €10.03/MWh above the price of Monday, November 18, respectively. Despite this, at AleaSoft the prices for the next few days are expected to fall slightly due to an increase in wind energy production. 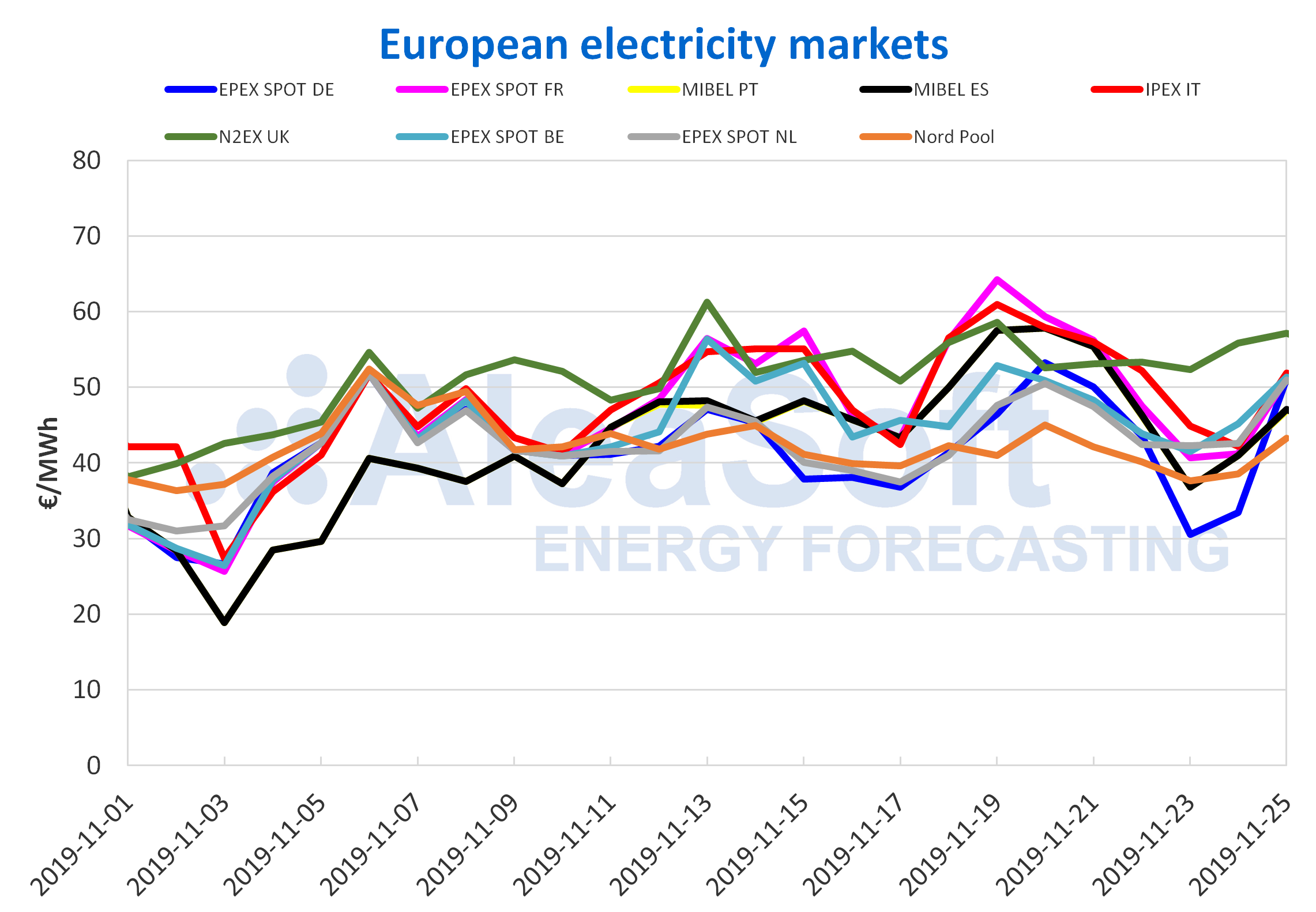 In the last week of November 18, most of the European electricity futures markets made a change of trend for the product of the first quarter of 2020. After several weeks presenting a downward trend, in the middle of last week the prices of most markets began to rise. Specifically, the OMIP market of Spain and Portugal left minimums of €50.01/MWh and €49.95/MWh respectively on November 21. These values represent the lowest price this market had since the beginning of May 2018. The EEX market also had historical lows for all the countries analysed at AleaSoft in the future of Q1‑20.

As for electricity futures for 2020, the behaviour was approximately the same as for Q1‑20. Some markets showed a marked increasing trend since November 19, as is the case of the EEX market of Germany, France, Italy and Great Britain. When settling last Friday, November 22, at €47.60/MWh, the ICE market of the Netherlands was the one with the largest increase compared to the previous Friday, with 2.2%.

The Brent oil futures prices for the month of January 2020 in the ICE market decreased the first days of last week. Instead, on Wednesday and Thursday they rose. As a result of these increases, on Thursday, November 21, a settlement price of $63.97/bbl was reached, the highest so far this month. On Friday, November 22, the price fell again to $63.39/bbl, but it was still $0.09/bbl higher than that of Friday, November 15.

In the coming days, the price behaviour is expected to continue to vary under the influence of the news about the possible trade agreement between China and the United States and the statements about the intentions regarding the possibility of agreeing production reductions at the meeting of OPEC+ to be held in early December.

The TTF gas futures in the ICE market for the month of December on Monday of last week reached a price of €15.23/MWh, which was €0.48/MWh lower than that of Friday, November 15. But on Tuesday, November 19, they started an upward trend that they maintained until Friday. The settlement price of Friday, November 22, was €16.05/MWh, 2.1% higher than the one of Friday of the previous week. This behaviour was influenced by the reductions in the flow of gas from Norway, which could be maintained in the coming days.

The API 2 coal futures in the ICE market for the month of December, as in the case of TTF gas futures, started the week of November 18 with a price lower than that of the previous Friday. But then there were continued price increases until Friday, November 22. That day the settlement price was $59.25/t, the highest so far this month.

Regarding the CO2 emission rights futures prices in the EEX market for the reference contract of December 2019, despite the setbacks of Monday, November 18, and Thursday, November 21, of 1.9% and 0.3% respectively, the increases registered during most of last week resulted in a settlement price of €24.58/t on Friday, November 22, 3.1% higher than that of Friday, November 15. 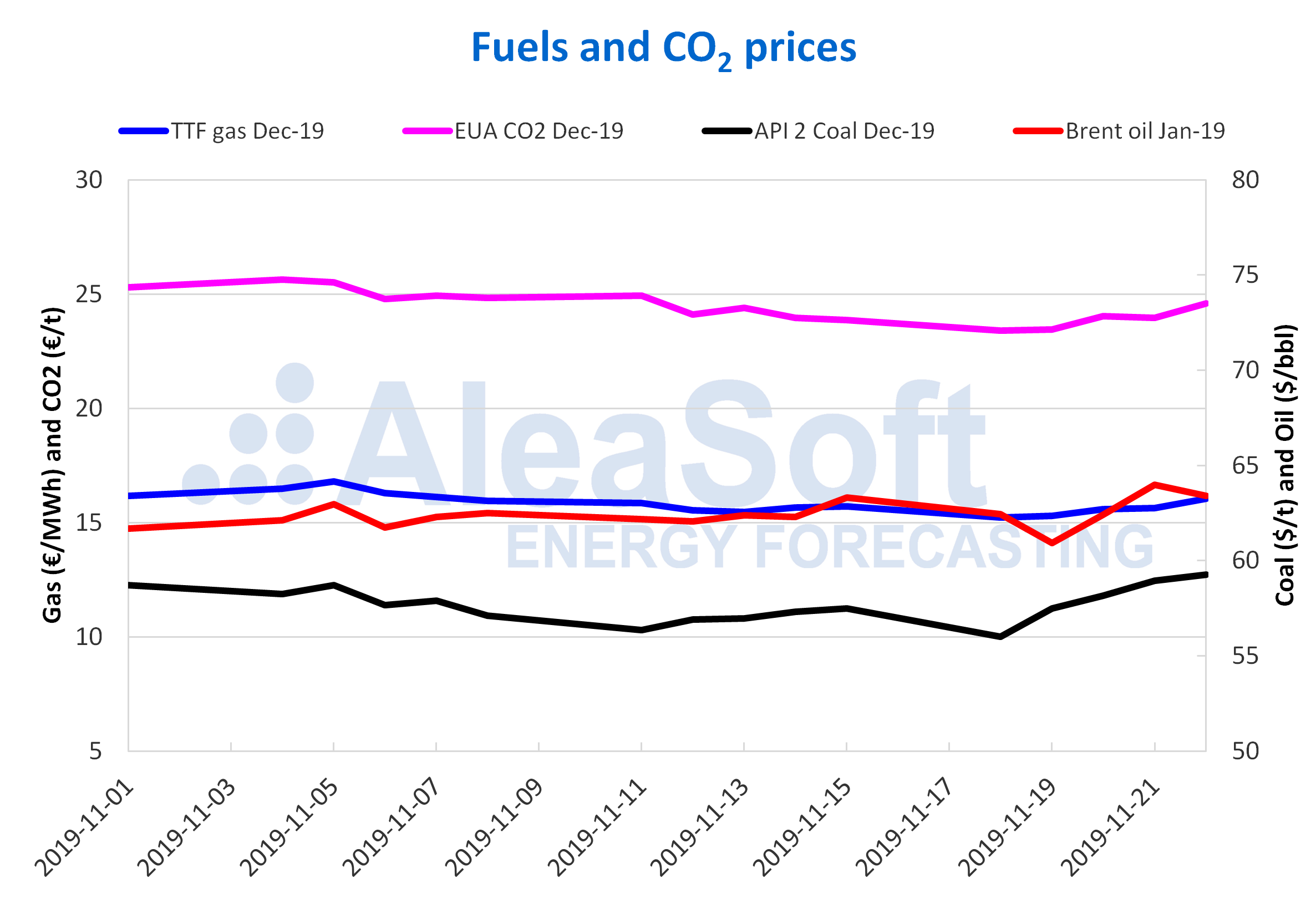