AleaSoft Energy Forecasting, May 27, 2022. For the energy transition and the challenge of 100% renewable electricity generation, not only is the amount of renewable energy that can be produced important, but also that it is generated with the largest possible diversity of technologies.

The energy transition that will end in a completely decarbonised economy, with a zero net balance of greenhouse gas emissions, is a gigantic process that involves changes in energy production, consumption, exchanges and storage. As far as electricity generation is concerned, the goal is for it to be produced exclusively from renewable energies.

Once the goal of 100% renewable generation is established, it is very instinctive to bet on quantity. Objectives are set to install the largest number of renewable energy plants so that they are capable of generating the largest amount of energy. But beyond quantity, diversity is essential. Production with different renewable energy technologies allows the disadvantages and inconveniences that each particular technology may have, such as costs, performance, manageability, intermittency or seasonality, to be overcome.

A 100% renewable electricity system will allow decarbonisation. A diversified electricity system will allow it to be robust and reliable. The following graph shows the monthly load factor of four of the most important renewable energy technologies in the Spanish peninsular territory. Each technology has its strengths and drawbacks. Solar thermoelectric energy provides very high performance during the summer and allows part of the energy to be stored, but its performance drops a lot in winter and the initial investment is high. On the other hand, solar photovoltaic energy has much lower costs, but its overall performance is lower. Wind energy has a higher yield, but also a higher cost. Pumping stations are manageable and allow storing energy, but they have lower performance and their cost and environmental impact are high. 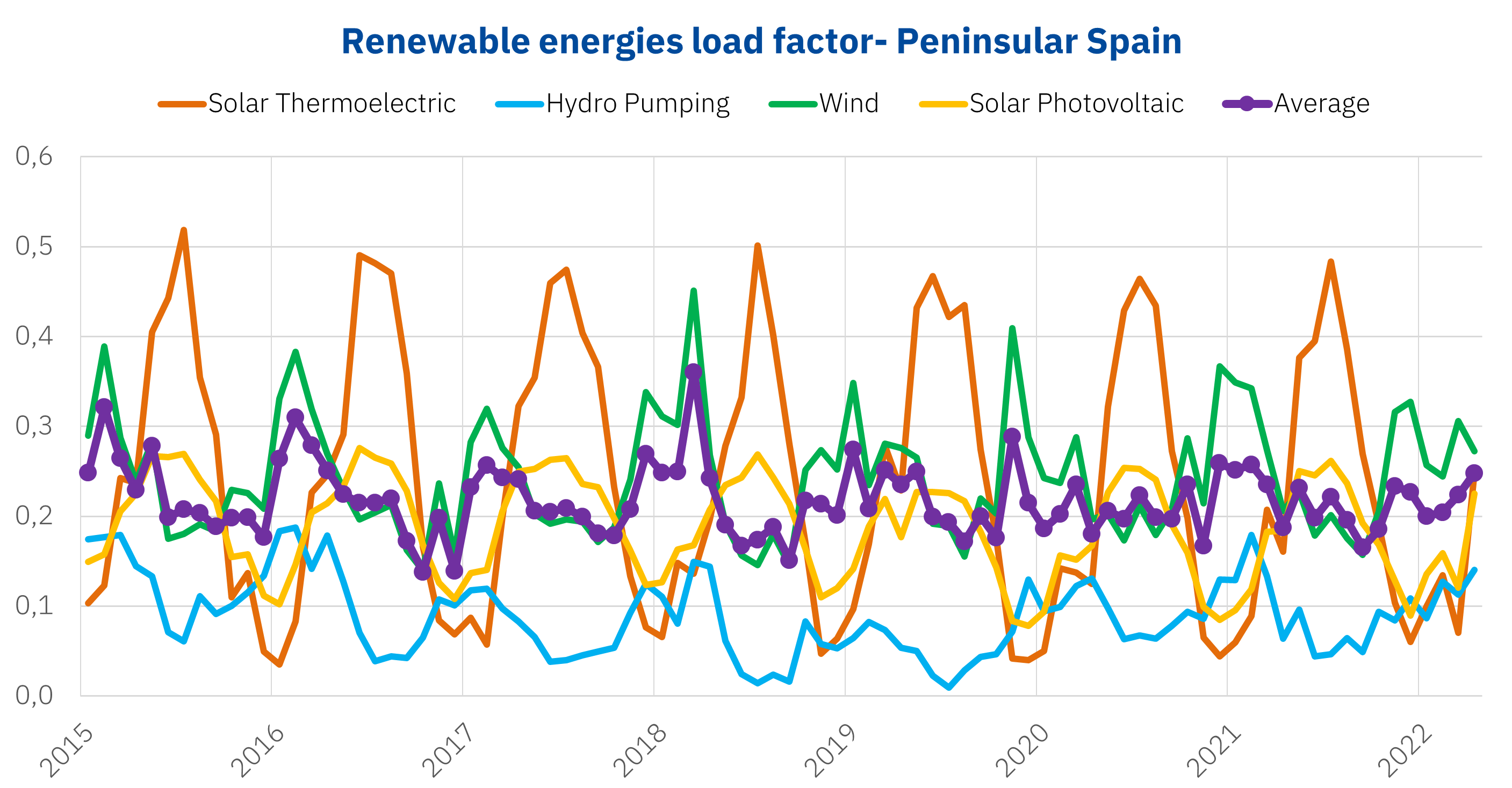 But all of them complement each other and provide a more stable and firm production. The graph shows that between 2015 and 2018, when wind energy was the dominant renewable energy, the global performance of the four technologies was basically conditioned by the seasonality of wind energy generation. But as photovoltaic energy capacity begins to grow in 2019, the complementarity between both technologies generates a much more stable performance throughout the year.

To follow current events in the energy sector in Europe and analyse its mid‑ and long‑term prospects, AleaSoft Energy Forecasting and AleaGreen organise a series of monthly webinars. The next edition will be held on June 9 and will have speakers from Engie as guests. This will be the fifth time that Engie participates in the monthly webinars and it has always provided a very clear and interesting first‑hand view of the state of PPA and renewable energy projects financing. The current regulatory issues of the Spanish electricity sector and the prospects for the energy markets in Europe for the second half of the year will also be analysed.