AleaSoft Energy Forecasting, March 4, 2022. Energy markets prices rose even more since the Russian invasion of Ukraine began, putting consumers, especially electro‑intensive consumers, and the economy in general in a more critical situation. This highlights the importance of Spain and the European Union achieving the energy independence. The long‑term solution lies in renewable energy and green hydrogen, so it is important to multiply efforts to promote their development.

A few days ago at AleaSoft Energy Forecasting, how the beginning of the Russian invasion of Ukraine increased the macrovolatility in the energy markets was analysed, when the situation was expected to worsen even more. Unfortunately, this was the case, and this conflict, apart from the devastating consequences for Ukraine and its citizens, can lead to a deep global crisis.

Russia is the world’s largest gas exporter and, according to Eurostat data, around 40% of the gas imported by the European Union comes from that country. Since the invasion began, prices of this fuel did not stop rising due to concerns that Russia will reduce or suspend supplies in response to the sanctions that were applied and because some countries decided not to continue buying gas with Russian origin. TTF gas futures prices for the next month in the ICE market rose 36% in the session of March 2 compared to the previous day and settled at €165.54/MWh, a value that is the maximum of 2022 until the moment. Also on that day, intraday prices registered great variability. For example, at one point in the session they reached a price of €193.95/MWh and in less than an hour they fell to €145/MWh. Subsequently, on March 3, the settlement price fell by 2.9% and stood at €160.82/MWh, the second highest value of 2022 so far.

Something similar happened with oil prices, given that Russia is the third largest oil producer and the largest exporter globally. According to Eurostat data, in 2019, 27% of the oil imported by the European Union was Russian. After the invasion, the settlement prices of Brent oil for the Front‑Month in the ICE market exceeded $100/bbl and in the session of March 2 they registered $112.93/bbl, a level not reached since July of 2014 and which is the maximum of 2022 until the session of March 3. 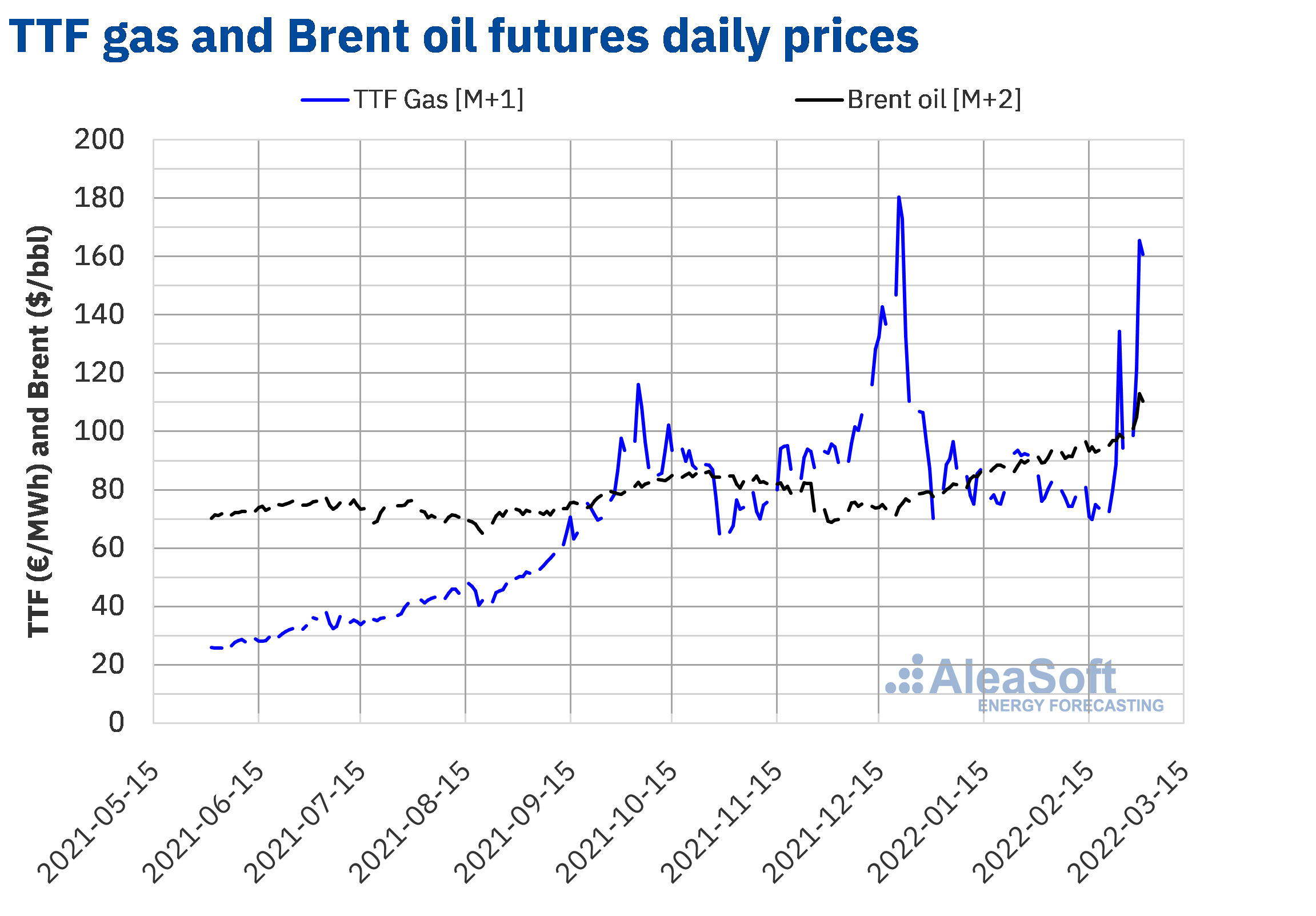 In this context, European electricity markets prices also increased and after the invasion the hourly and daily maximums of the year or of the historical series were registered, such as the historical hourly record of €410.00/MWh reached in the Spanish market for 7 pm of March 4. In addition, that day prices averaged €383.13/MWh in the Italian market and exceeded €300/MWh in the main European markets, something that had already happened the day before.

Impact on the economy

With this panorama of rising energy prices, inflation will continue to rise, because the effect of energy price will be added to the effect of higher prices for other products as a result of this increase in energy prices. Added to this is the lack of supplies of raw materials and food from Ukraine and Russia and the consequences of the pandemic that is not completely controlled, so everything indicates that we are headed for a major global crisis.

How to mitigate the effect of the rise in electricity markets prices?

The rise in energy markets prices is making the bill paid by electricity consumers even more expensive and is putting large and electro‑intensive consumers in an even more critical situation, who were already affected by the rise in prices of 2021 in a special way, as was commented on in the webinar that was held in February at AleaSoft Energy Forecasting with the participation of Fernando Soto, Director‑General of AEGE, and Juan Puyol, Deputy Director at Cesce in the Spanish version of the webinar. This situation highlights the importance of being covered by long‑term bilateral contracts or PPA (Power Purchase Agreement) that avoid or minimise the market prices risk.

A proposal that was made several times at AleaSoft Energy Forecasting and that in critical times like the current one can be very useful to reduce electricity markets prices, is temporarily implementing a moratorium on the payment of CO2 emission rights for the electricity generation with gas. This is something that the European Union could do which, although it would not mean a drastic drop in prices if gas prices remain high, would mean some relief for consumers.

The future is in renewable energies and green hydrogen

Beyond the measures to minimise the current effects that the war in Ukraine has caused in the energy markets, it is important to think, plan and develop measures that help achieve the energy independence. The solution is in renewable energies, taking advantage of the great solar and wind resources that Spain has, in the hybridisation of renewable energies with storage and in green hydrogen. This is a winning solution. The planet wins because emissions will be reduced, Spain and Europe win because long‑term energy independence is achieved and the economy wins, because this will mean significant economic development and a technological revolution.

In the next AleaSoft Energy Forecasting’s webinar, which will take place on March 17, the evolution of energy markets in recent weeks and the impact of the invasion of Ukraine by Russia will be analysed. Speakers from EY will also participate in the webinar, who will analyse some of the issues that can help mitigate the market prices risk, such as PPA and self‑consumption, the renewable energy projects financing, the main novelties in the regulation of the Spanish energy sector and the main considerations to take into account in the portfolio valuation.