AleaSoft, October 5, 2020. The month of October began with an increase in wind energy production in most of the European electricity markets, which lowered the prices in most of them. In this first week of the month, the electricity demand rose in most markets and the Brent prices fell to May levels. In the second week of October, a significant increase in wind energy production is expected in Germany and France, which will favour that the prices fall again in most of the markets.

The week from September 28 to October 4 ended with a solar energy production 15% lower than that of the previous week in the German market. Likewise, in the French market the production fell by 7.1%, while in the Iberian Peninsula it fell by 5.8%. The exception was the Italian market in which there was an increase of 4.0%.

During the first four days of October, the solar energy production increased by 46% in the German market compared to the same days of 2019. The Spanish market registered a slight increase of 1.8%. On the contrary, in the French market the production decreased by 24%, while in the Portuguese and Italian markets it decreased by 12% in each case. 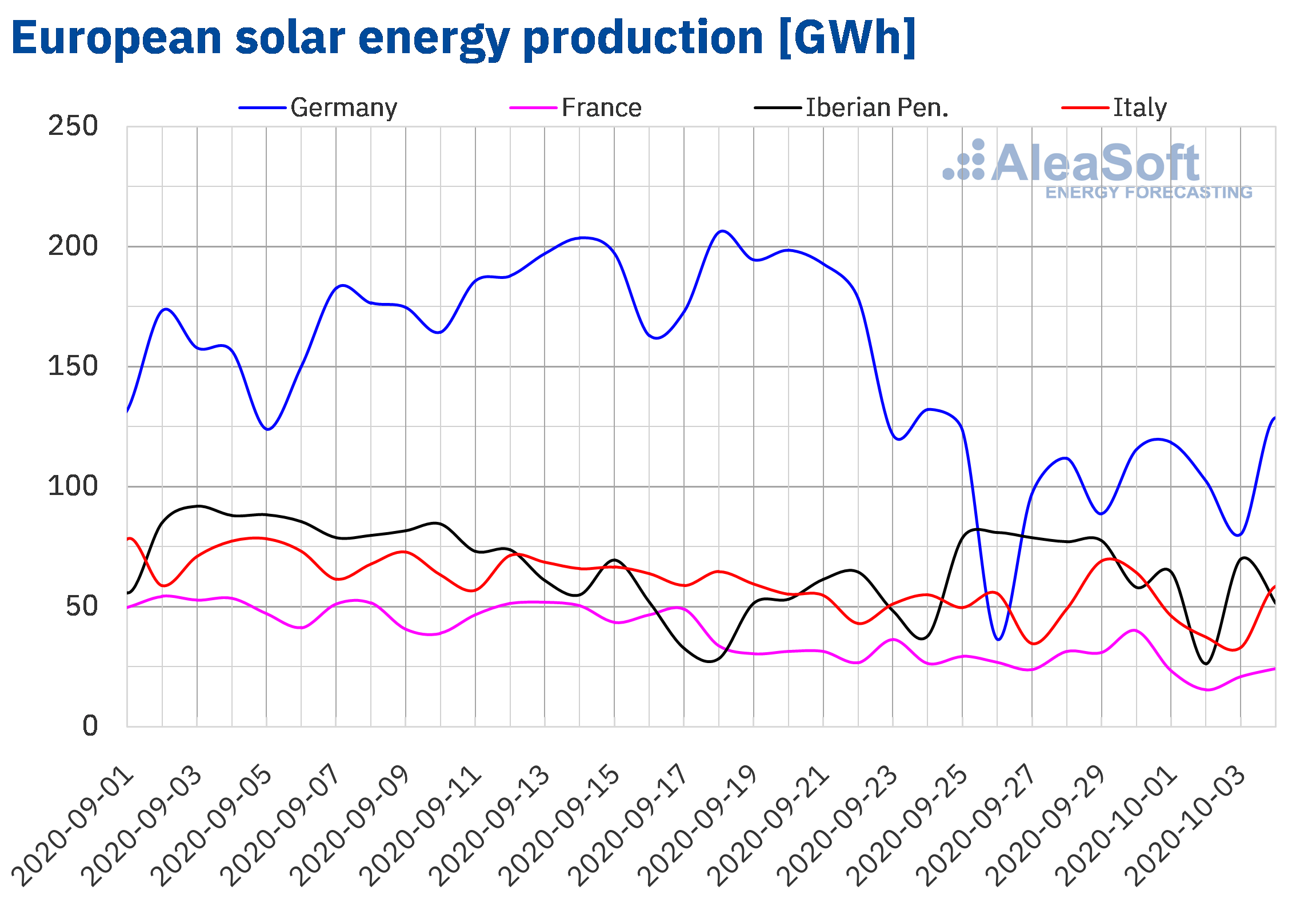 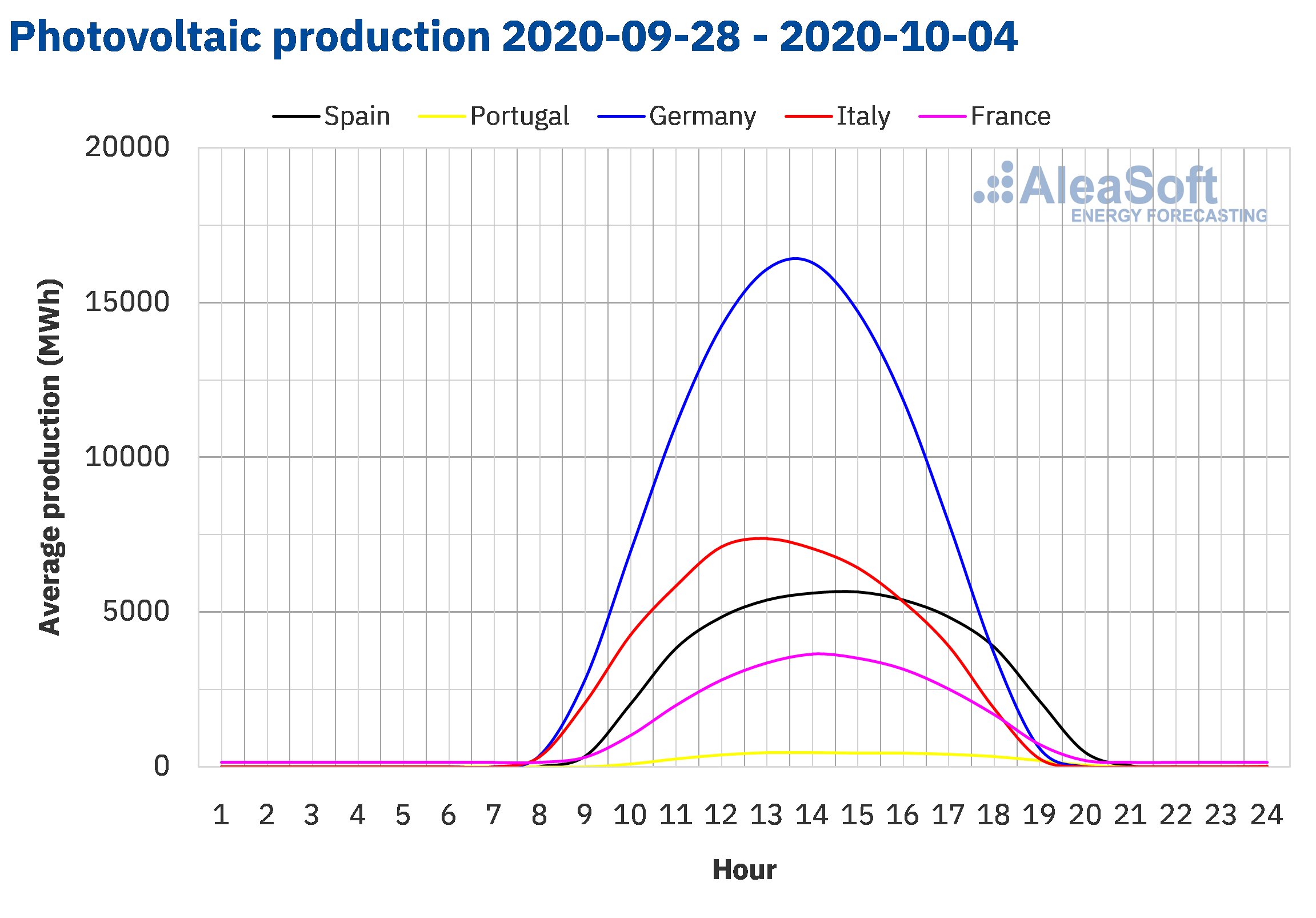 During the week of September 28, the wind energy production increased by 33% in the Portuguese market, 13% in the Spanish market and 12% in the German market, compared to the fourth week of September. On the contrary, in the markets of France and Italy, the production with this technology reduced by 21% in both cases.

In the year‑on‑year analysis, an increase in production was registered in most of the markets analysed at AleaSoft during the first four days of October. In the Iberian Peninsula, the production during that period was 153% higher than that of the same days of 2019, while in the markets of Germany and France, the production with this technology grew by 58% and 33% respectively. The exception was the Italian market in which the wind energy production decreased by 8.6%.

For the week that started on October 5, the AleaSoft‘s wind energy production forecasting indicates a significant increase in production in Germany and an increase is also expected in France. On the contrary, it is expected that in the rest of the markets it will decrease compared to the previous week. 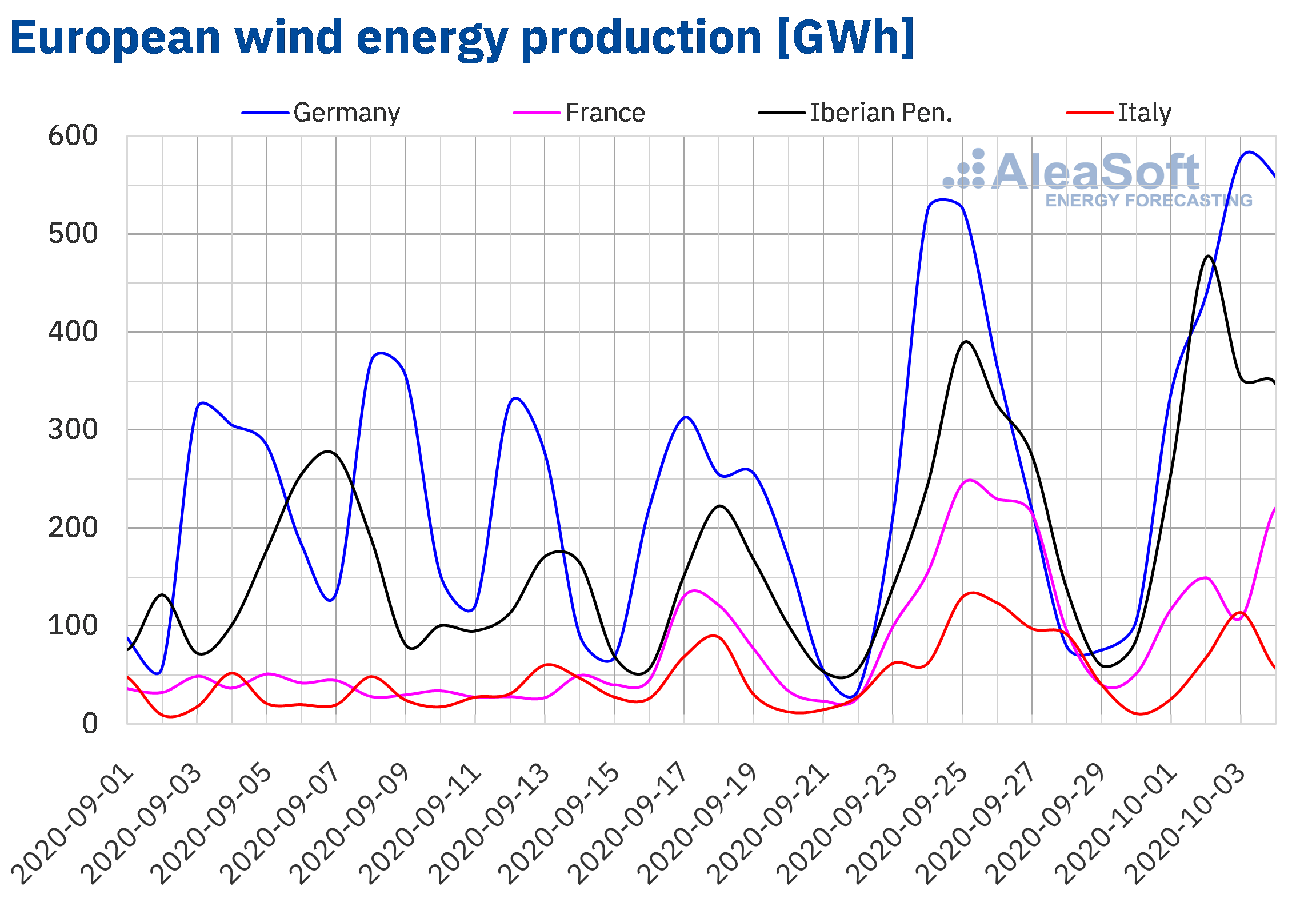 The electricity demand showed signs of recovery in most of the European markets during the week of September 28 compared to the previous week. The largest increases were registered in the markets of France and Great Britain, with increases of 7.9% and 7.8% respectively. In the markets of Germany and Belgium the percentage increases were in the order of 2.5% in both cases. On the other hand, there were setbacks in demand of 3.3% in Italy, of 1.2% in Portugal and of 0.9% in Spain.

At the AleaSoft’s electricity markets observatories, the behaviour of the demand and other market variables can be analysed through visualisations with hourly, daily and weekly granularity.

For the second week of October, the AleaSoft’s demand forecasting indicates an increase in electricity demand in the markets of Portugal and Great Britain, while decreases are expected in the rest of the analysed markets. 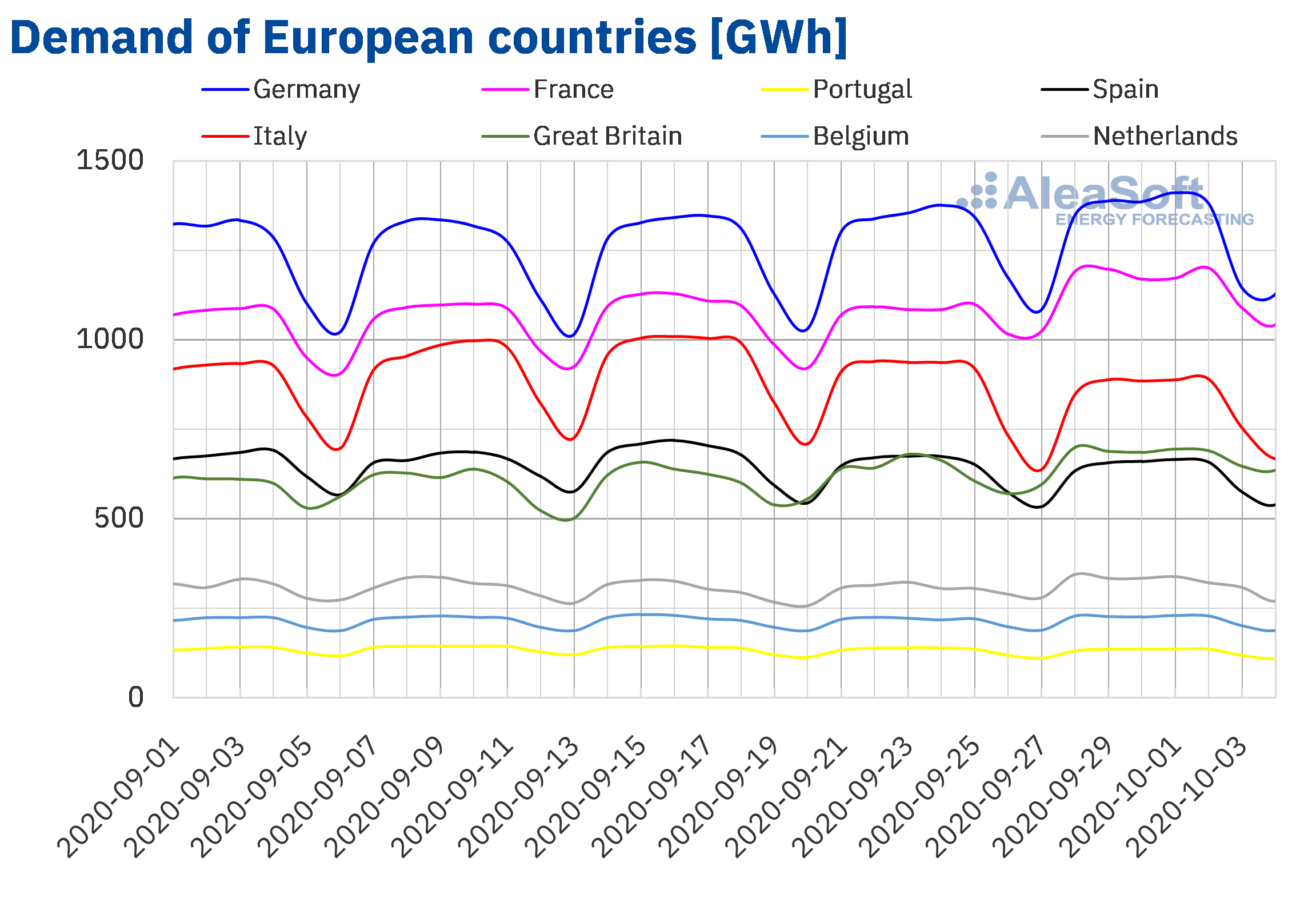 The week of September 28, the behaviour of the prices was different depending on the electricity market. On the one hand, the prices increased compared to those of the previous week in the N2EX market of Great Britain, in the EPEX SPOT market of Belgium and the Netherlands and in the Nord Pool market of the Nordic countries. The market with the highest price increase, of 6.1%, was that of the Netherlands. In contrast, the market with the lowest price increase, of 1.1%, was that of the Nordic countries. On the other hand, the prices fell in the MIBEL market of Spain and Portugal, in the IPEX market of Italy and in the EPEX SPOT market of Germany and France. The largest drop in prices, of 16%, corresponded to the German market and the smallest, of 9.9%, to the French market.

During the analysed week, weekly average prices were higher than €40/MWh in most of the European electricity markets. The highest, of €49.91/MWh, was that of the N2EX market, followed by that of the Belgian market, of €43.22/MWh. On the other hand, the weekly averages were lower than €40/MWh in the EPEX SPOT market of Germany and the MIBEL market of Spain and Portugal, with values of €36.63/MWh, €34.10/MWh and €34.08/MWh respectively. In the case of the Nord Pool market, it had the lowest average price, of €8.88/MWh.

On the other hand, during the course of the week the prices of the European electricity markets were loosely coupled. The markets whose behaviour was further away from that of the majority were the N2EX market, with higher prices, and the Nord Pool market, with much lower prices.

Regarding the daily prices, the highest were those of the first days of the week. On September 29, the prices of almost all European markets exceeded €55/MWh, except those of the MIBEL market and the Nord Pool market. But the highest daily price, €61.56/MWh, was reached on Thursday, October 1, in the British market. On the other hand, on Sunday, October 4, the prices were, in general, below €25/MWh, with the exception of the markets of Great Britain and the Netherlands.

As for the hourly prices, on the weekend of October 3 and 4, negative hourly prices were reached in the German market. The lowest price, of ‑€54.97/MWh, was that of the hour 14 of Sunday, October 4. On the other hand, the highest hourly price, of €164.16/MWh, was reached at the hour 21 of October 1 in the British market. 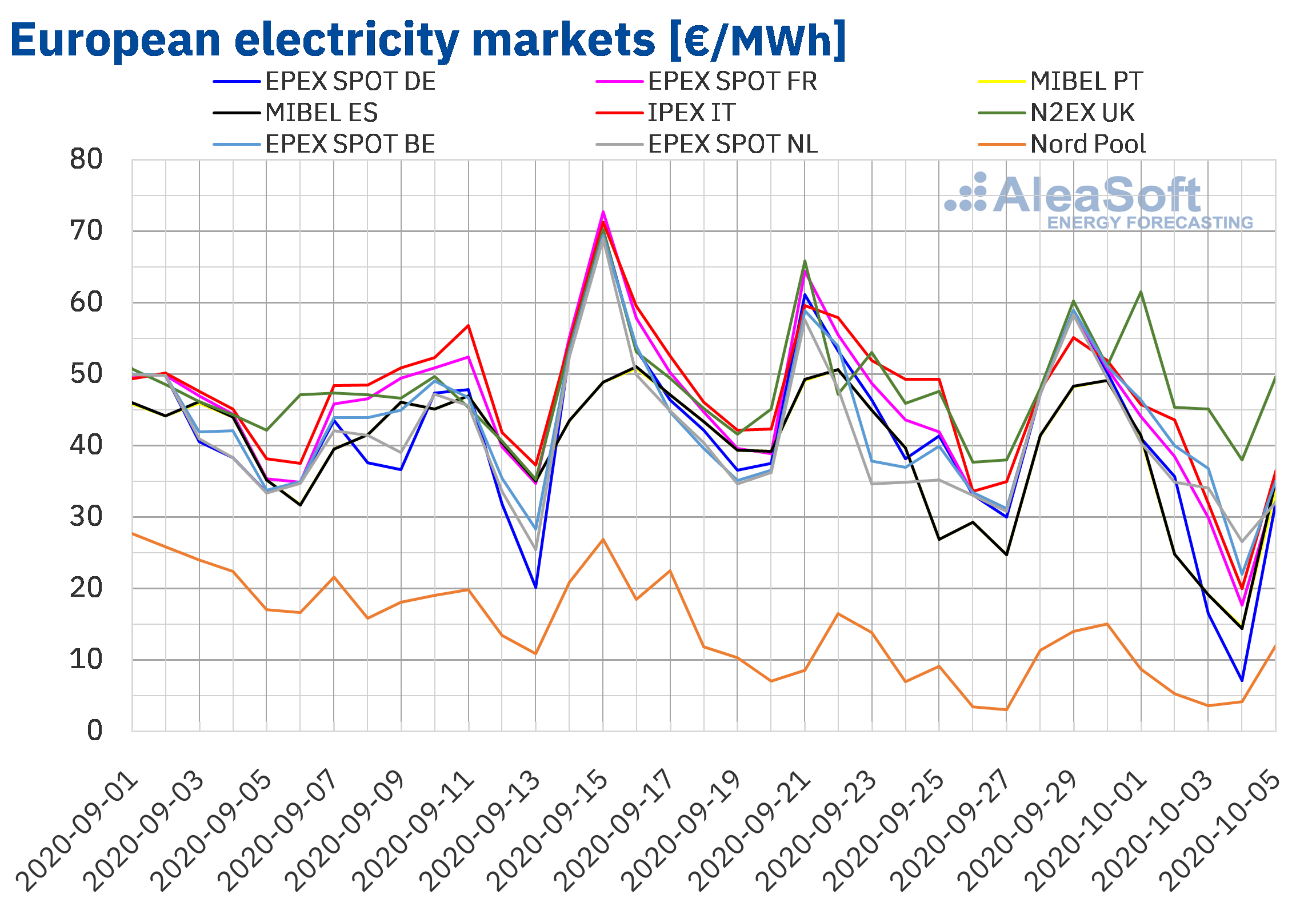 The AleaSoft‘s price forecasting indicates that in the week of October 5, the prices will fall in most of the analysed European electricity markets, favoured by the increase in wind energy production that is expected in some cases such as Germany. The MIBEL market will be the exception as a lower renewable energy production is expected. 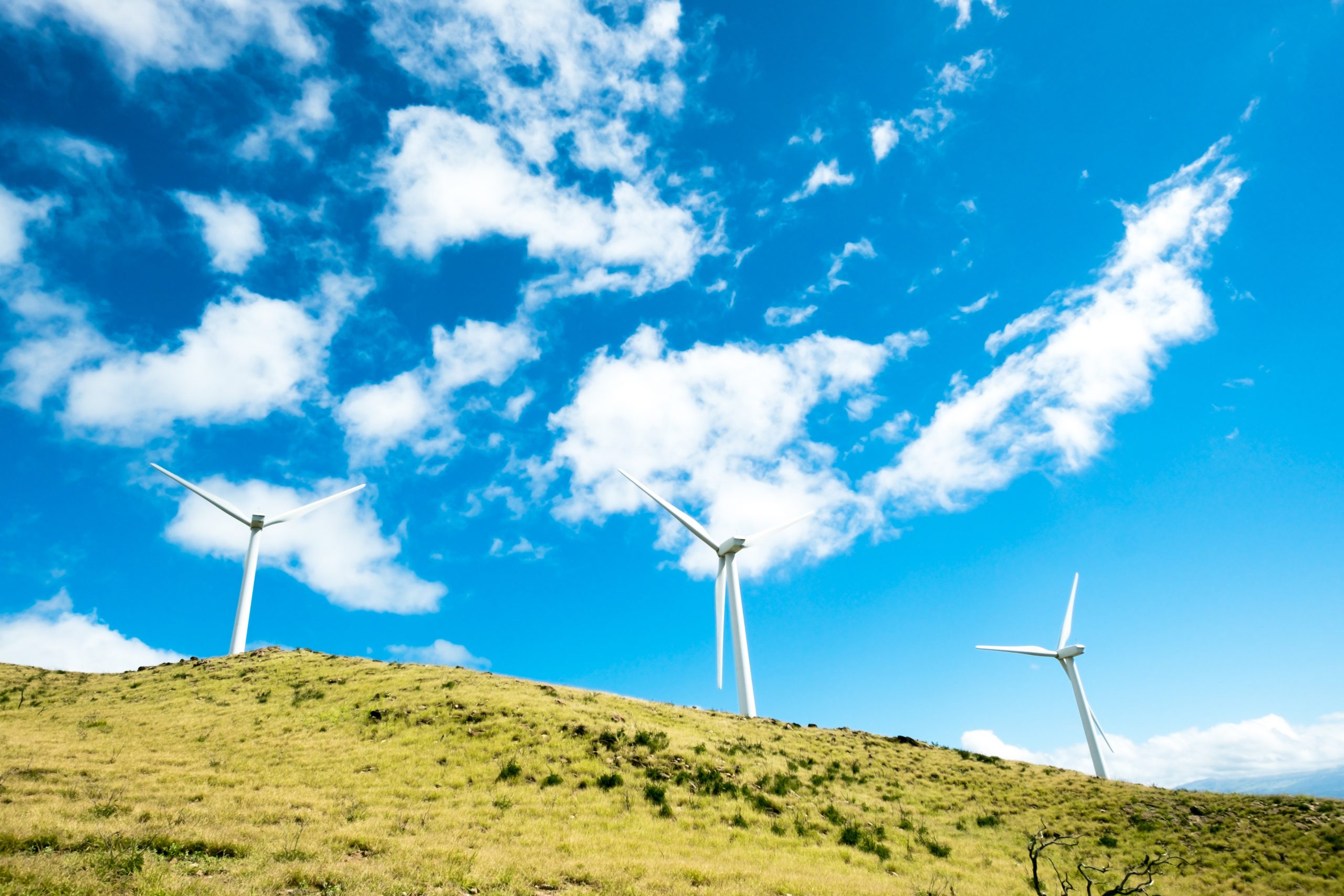 During the week of September 28, the European electricity futures markets registered a mostly downward behaviour for the product of the first quarter of 2021. Only the prices in the ICE market and the NASDAQ market of the Nordic countries increased, with variations of 0.4% and 0.7% respectively. In the ICE market of the Netherlands, the variation was also 0.4% at the end of the week, although in this case it was negative, being the one with the smallest decrease. In the rest of the markets, the decreases were between 1.4% of the ICE market of Belgium and 6.6% of the EEX market of France.

As for the futures for the next calendar year 2021, there was a downward behaviour in all the markets analysed at AleaSoft. In this case, the prices of Great Britain fell both in the EEX market and in the ICE market by 2.3%. As for the largest fall, of 3.1%, it was registered in the French market. In the rest of the markets the decreases were between 1.0% of the EEX market of Italy and 0.4% of the NASDAQ market of the Nordic countries.

The Brent oil futures prices for the month of December 2020 in the ICE market, on Monday, September 28, reached a settlement price of $42.87/bbl, 2.2% higher than that of the previous Monday. The rest of the week, except Wednesday, September 30, the prices fell. As a consequence, the settlement price of Friday, October 2, was $39.27/bbl. This price was 7.4% lower than that of the previous Friday and the lowest since the end of May.

In the last week of September, the concerns about the demand, which could be affected by new mobility restrictions due to the increase in the number of coronavirus infections, continued. Meanwhile, the production levels continued to increase in the United States, Iran, Libya and Russia.

To this situation was added on Friday the news of the contagion by COVID‑19 of the US president, which also exerted its downward influence on the prices.

The news about the improvement in the health of the president of the United States, as well as the strikes in the Norwegian oil sector, may favour the recovery of the prices this week.

As for the TTF gas futures prices in the ICE market for the month of November 2020, the last week of September they remained above €13/MWh. The maximum settlement price of the week, of €13.82/MWh, was reached on Monday, September 28. This price was 7.9% higher than that of the same day of the previous week and the highest since the end of February. But the rest of the week, the prices fell and the settlement price of Friday, October 2, was €13.03/MWh, 1.0% lower than that of the previous Friday.

Regarding the TTF gas prices in the spot market, they started the last week of September with an upward trend. On Wednesday, September 30, the maximum index price of the week, of €12.49/MWh, was reached. This price was the highest since December 2019. But, in the last days of the week, the prices were below €12/MWh again and the index price of October 3 and 4 was €11.59/MWh.

As for the CO2 emission rights futures prices in the EEX market for the reference contract of December 2020, in the last week of September they oscillated, taking values between €26.52/t of Thursday, October 1, and the €27.71/t of Monday, September 28. At the end of the week, the settlement price of Friday, October 2, was €27.04/t, 3.4% higher than that of the previous Friday. 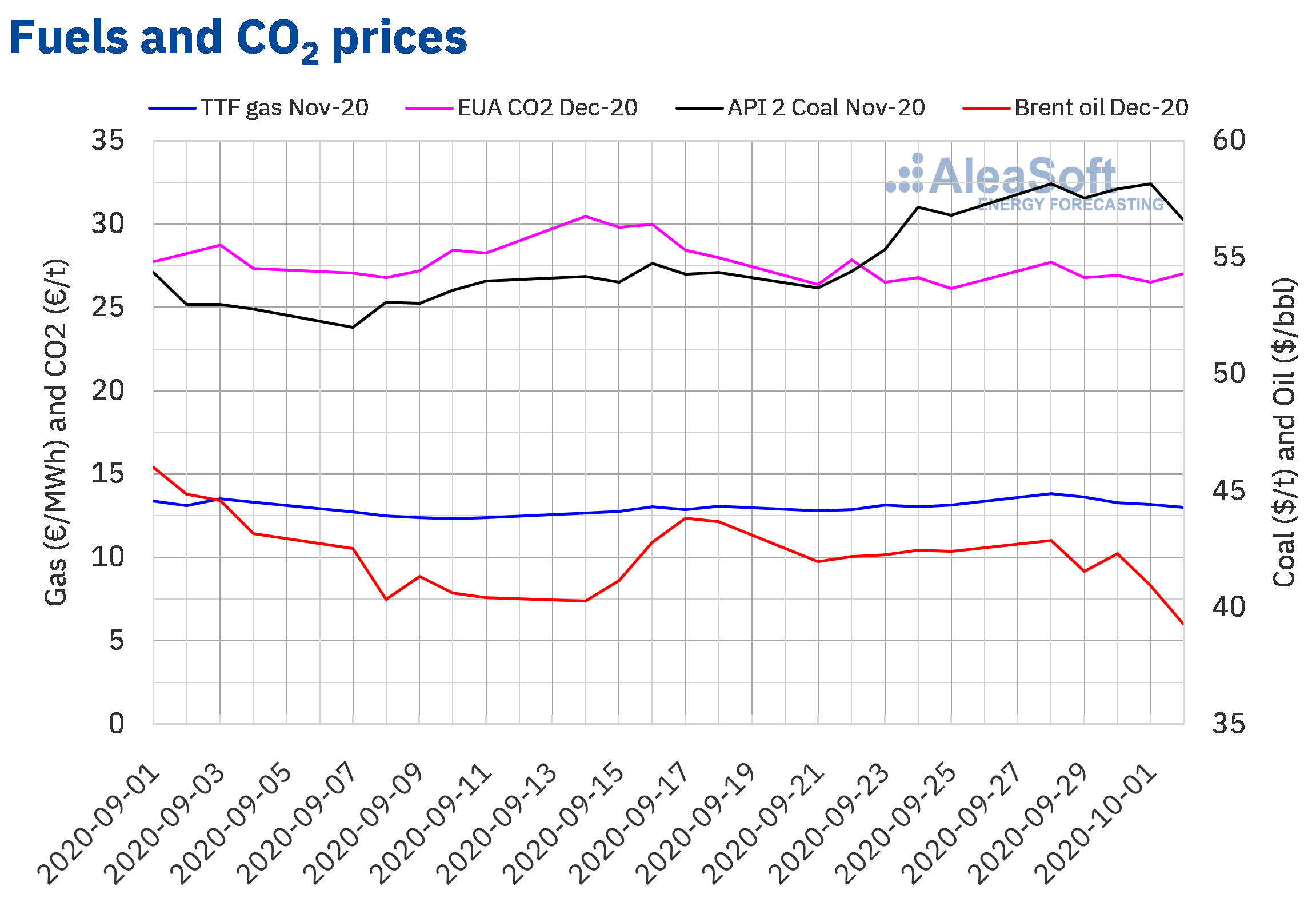 On October 8, APPA Renovables is organising the webinar “Electricity market prices curves for renewable energy financing”, with the participation of Antonio Delgado Rigal, CEO of AleaSoft, and moderated by Paloma Rodríguez, Project Manager of APPA Renovables. In the coming years, a significant increase in renewable capacity is expected and, in order to obtain the necessary financing to carry out the projects, it is important to know how the long‑term electricity markets prices curves will evolve. This webinar will take place on the same day that AleaSoft celebrates 21 years as a provider of forecasting for the energy sector in Europe and working to promote the development of the renewable energies.

In order to continue with the informative work that has been carried out at AleaSoft since the COVID‑19 pandemic began, on October 29 the second part of the webinar “Energy markets in the recovery from the economic crisis” will be held. It will also have the participation of two invited speakers from the consulting firm Deloitte, Pablo Castillo Lekuona, Senior Manager of Global IFRS & Offerings Services and Carlos Milans del Bosch, Partner of Financial Advisory. On this occasion, the topics analysed in the first part of the webinar will continue to be deepened:

Coinciding with the start of the fourth quarter, at AleaSoft the long‑term price curves of the European electricity markets are being updated. In this process, the most up‑to‑date data on the evolution of the economy are incorporated, as well as the exit scenarios from the economic crisis.

To periodically monitor the energy markets, the observatories were enabled on the AleaSoft website, a tool that includes graphs of the main variables of the European electricity, fuels and CO2 emission rights markets. The included data are hourly, daily and weekly and are updated daily.

PrevAnteriorInterview of El Periódico de la Energía with Antonio Delgado Rigal, PhD in Artificial Intelligence and CEO of AleaSoft
SiguienteAll the renewable energy will fit because the limit of the demand is not the Spanish electricity systemNext
Menu
Facebook-f Twitter Linkedin Instagram