Opportunities for renewable energy in the United States

AleaSoft, June 16, 2021. The United States set out to be emissions neutral by 2050 and by 2035 to be able to produce all its electricity from renewable energy sources. The amount of new capacity required to achieve these objectives in a relatively short time makes the North American country one of the regions with the most opportunities for investment in renewable energy. AleaSoft has the long‑term prices forecasts necessary for the development of renewable energy facilities in the United States.

The goal of the Paris Agreement to keep the rise in global temperatures below 2 °C is, by definition, a goal that involves every country on the planet. The European Union was firm in this commitment and approved climate neutrality targets for 2050, with the intermediate goal of a 55% reduction in greenhouse gas emissions by 2030 compared to 1990 levels.

All the countries of the Union prepared their Energy and Climate Plans with the objectives to be pursued and the policies to take to make them possible in renewable energy, energy efficiency and decarbonisation, all of them aligned with the common objectives for 2030 and 2050. Probably, an example that may be taken by many world economies, at least in intentions.

But on the other side of the Atlantic is another great world economy, the United States. After four very erratic years in many ways during the Trump administration, especially in terms of environmental policies, with the arrival in the White House of President Biden, environmental policies resurfaced with great force and very ambitious goals are being proposed.

The North American country also proposed to be neutral in CO2 and greenhouse gases emissions by 2050, with a reduction in emissions of 50% in 2030 compared to 2005 levels. The North American president proposed that 100% of the electricity generated in 2035 is from renewable energy sources.

Specific problems for the renewable energy development in the United States

Unlike the European continent, which, on average, can be considered densely populated, in North America there are large areas with very little or very scattered population. This is a problem for high‑voltage electricity transmission lines. The regions with the greatest solar and wind energy resources are those that do not usually have a robust infrastructure of electricity transmission lines.

To this, the fact that many of these lands in areas with a lot of renewable energy resources are public lands, either of the state in question or of the federal government, must be added and the procedures and bureaucracy to be able to develop renewable energy generation facilities on those lands is much more tedious and longer than in privately owned land.

To do this, the Department of the Interior aims to approve the construction of 25 GW of renewable energy on federal land by 2025. To reach the climate neutrality goals in 2050, some studies indicate that five times more public land area could be needed.

Investment and money disposition announcements by President Biden’s administration to achieve the environmental goals were continuous in recent months. Among many other announcements, specifically for renewable energy, they pledged $800 billion for the wind energy turbine and solar energy panel industry, for the transition of the automotive industry to electric vehicles and for the next generation nuclear power plants.

Additionally, the Department of Energy will allocate 15.5 million dollars to bring solar energy to the communities that are the most neglected and affected by the fossil fuels pollution, and to boost the renewable energy industries.

The growth of the renewable energy in the United States 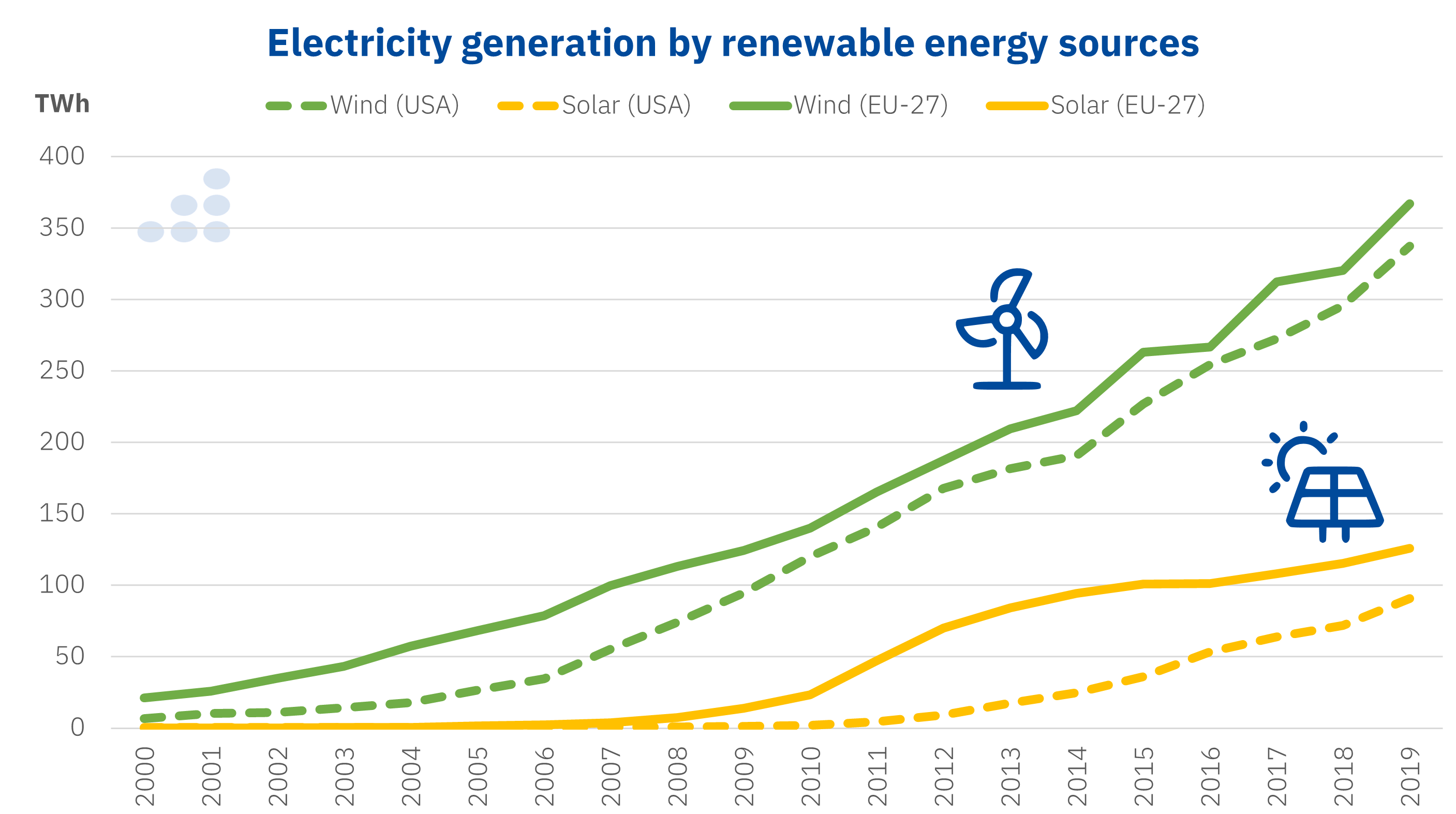 Looking ahead, towards the 2030 and 2035 targets, most studies estimate that annual growth in renewable energy capacity of around 70 GW is necessary, double the record achieved in 2020. The pace of battery installation is also expected to increase and it may reach 7.5 GW per year from 2026.

Looking at the final goal of climate neutrality by 2050, the rate of new renewable energy capacity should grow to 100 GW per year.

The cost of producing electricity with renewable energy

One of the key aspects for the success of renewable energy is the competitiveness of its costs, which decreased dramatically in recent decades, and this trend is expected to continue in the future.

Currently, the cost of producing electricity, LCOE, for the solar photovoltaic energy technology, for an average facility, is around $68/MWh in Europe and $43/MWh in the United States.

Investment opportunities in renewable energy in the United States

As in Europe, the renewable energy capacity targets that were set in the United States create a unique opportunity for companies that are investors and developers of renewable electricity generation facilities. The growth rates necessary to achieve the objectives are enormous and a lot of investment will be needed.

For a responsible investment in renewable energy generation parks, it is essential to have reliable forecasts of market prices in the long term, necessary for PPA and to obtain financing. AleaSoft also has prices forecasts for the electricity markets in the United States. Long‑term prices forecasts with confidence bands for the risk management and with the necessary hourly granularity to estimate the captured price and the future revenues for each particular project.