Weekend of contrasts in the European electricity markets: from negative prices to values close to €90/MWh

AleaSoft, June 14, 2021. At the weekend of June 12, several European electricity markets registered negative hourly values and daily values lower than those of the previous weekend due to the combination of lower demand and higher renewable energy production. But in the MIBEL, IPEX and N2EX markets, daily values at least €40/MWh higher than those of the neighbouring countries were registered. Brent and gas hit two‑year highs and CO2 rose again. European electricity futures rose in most markets.

The solar energy production increased in most of the European markets analysed at AleaSoft during the week of June 7 compared to the previous week. The highest increase was registered in the Spanish market, which was 24%, followed by the French market, where it rose by 23%, while in Portugal and Germany the production was 11% and 1.0% higher in each case. The exception was the Italian market where it decreased by 4.2%.

For the week of June 14, the AleaSoft‘s solar energy production forecasting indicates that it will decrease in the Spanish market. On the contrary, it is expected that it will increase in the German market and that there will be little variation in the Italian market. 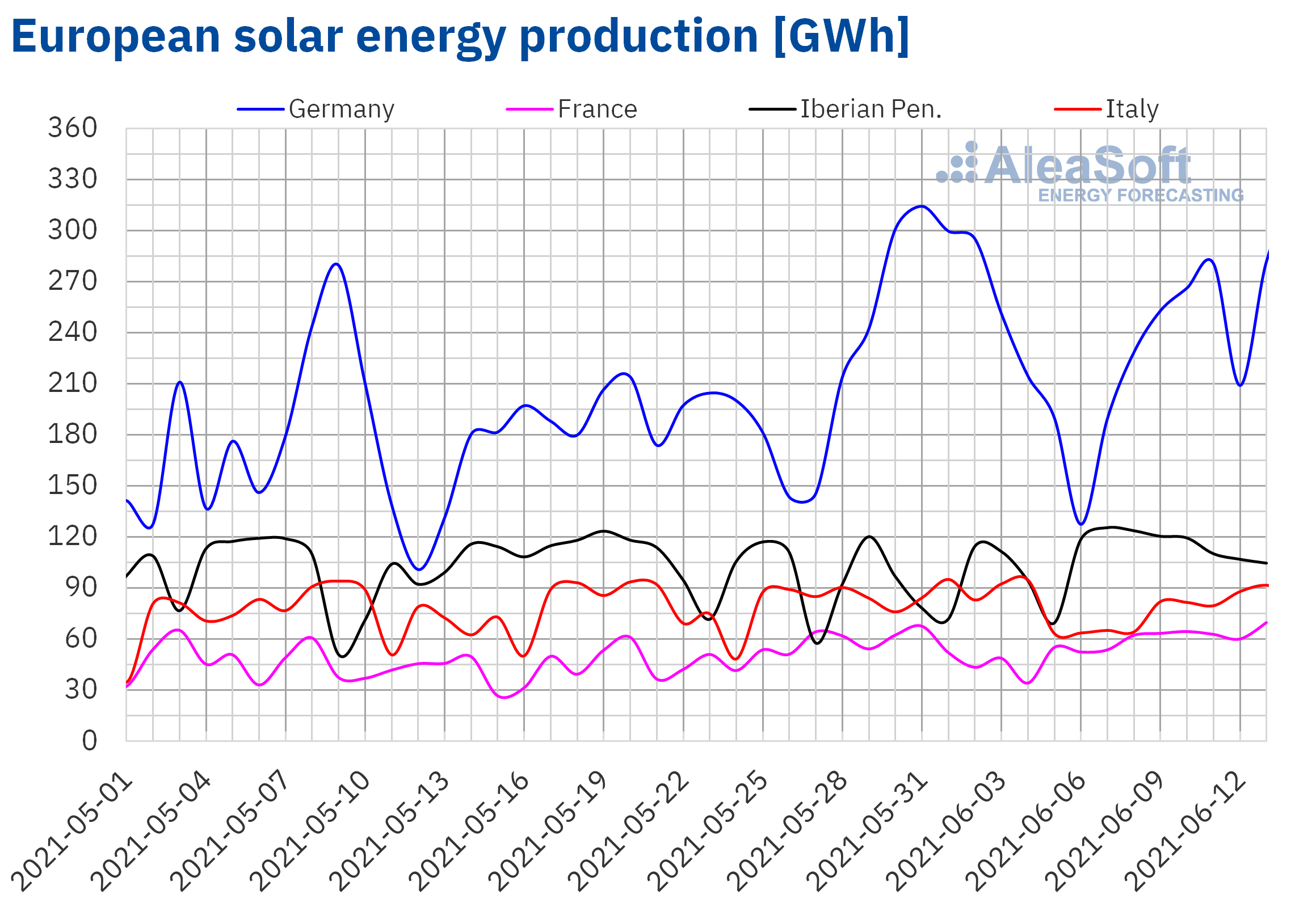 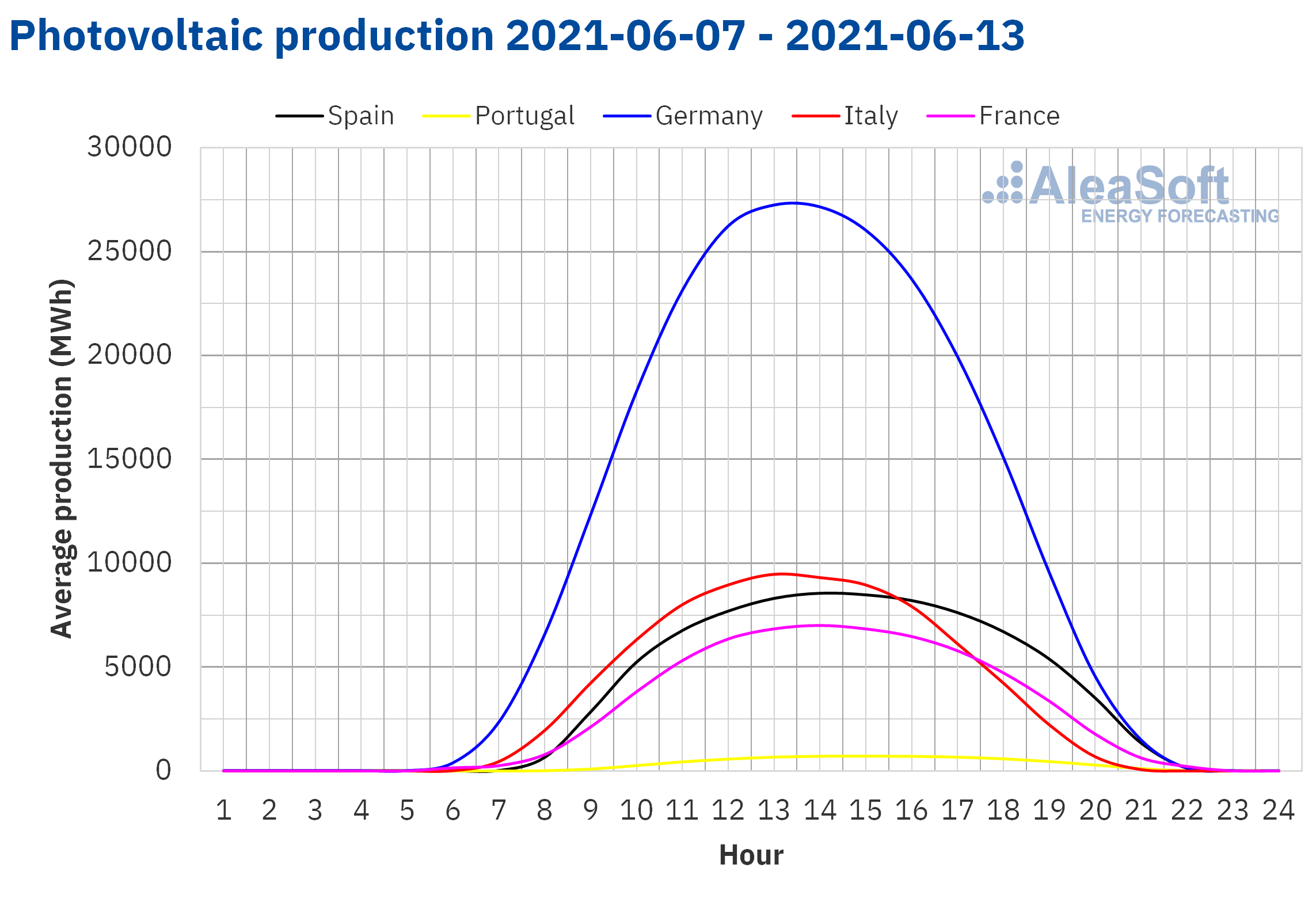 Regarding the wind energy production, in the second week of June it increased by 17% in the Iberian Peninsula compared to the week of May 31, while in the Italian market it grew by 19%. However, the production with this technology fell by 38% in the French market and by 2.5% in the German market.

For the third week of June, the AleaSoft‘s wind energy production forecasting indicates that it will be higher than that registered the previous week in the markets of Germany and France, while in the rest of the markets it is expected to fall. 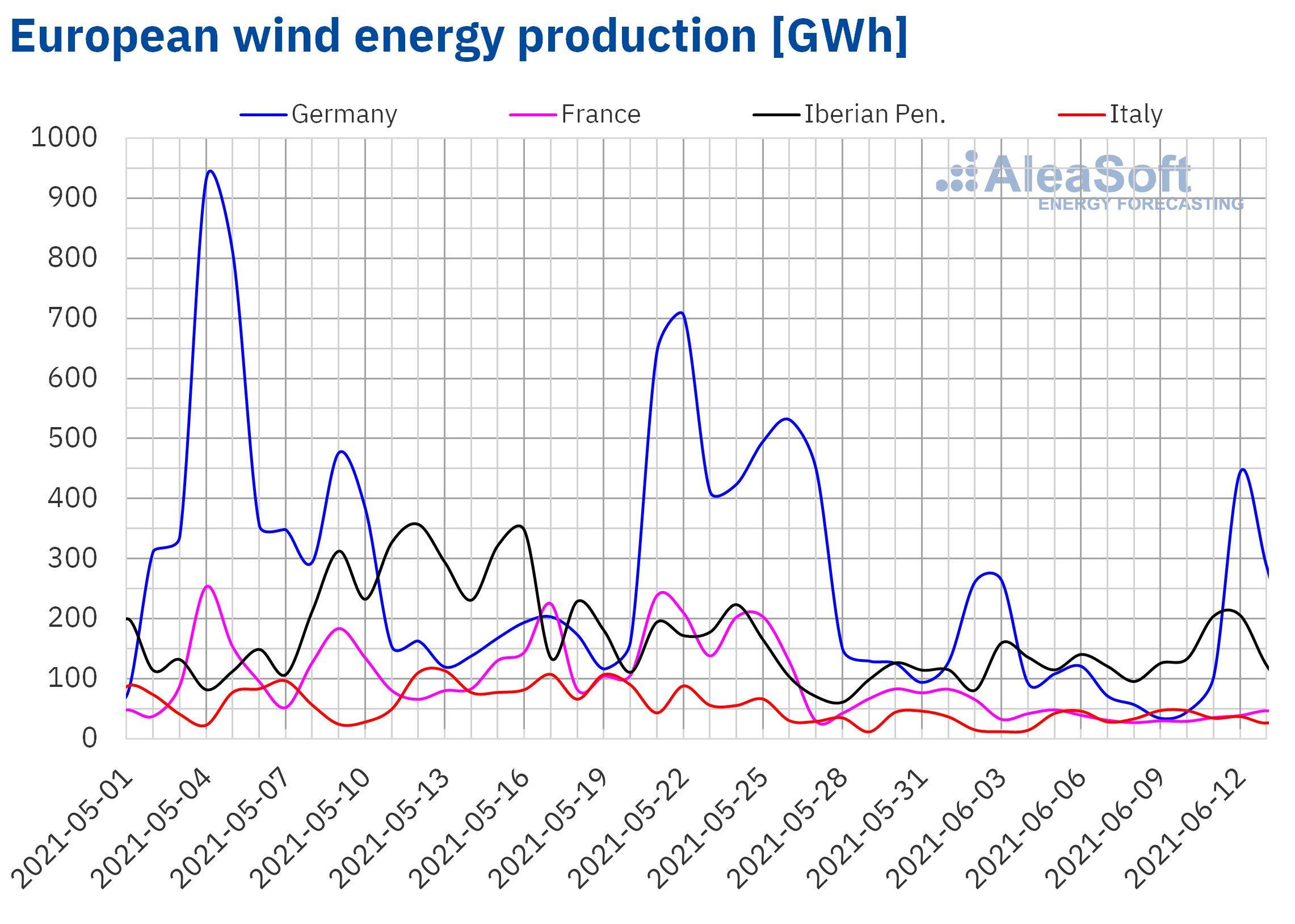 The increase in average temperatures, together with the effect of public holidays in some countries during the week of May 31, favoured the rise in electricity demand in most European markets during the week of June 7. The influence of these two factors became latent mainly in the Italian market, where the rise in demand was over 12%. When correcting both effects, the increase in demand in Italy was 4.8%. In the markets of Spain, Germany and Portugal there were increases between 3.0% and 5.0%. On the other hand, in Belgium there was a decrease of 1.8%.

The AleaSoft‘s demand forecasting indicates that the demand will continue the growing trend during the week of June 14. To follow the evolution of the demand, with daily updated data, the energy markets observatories are available at AleaSoft. 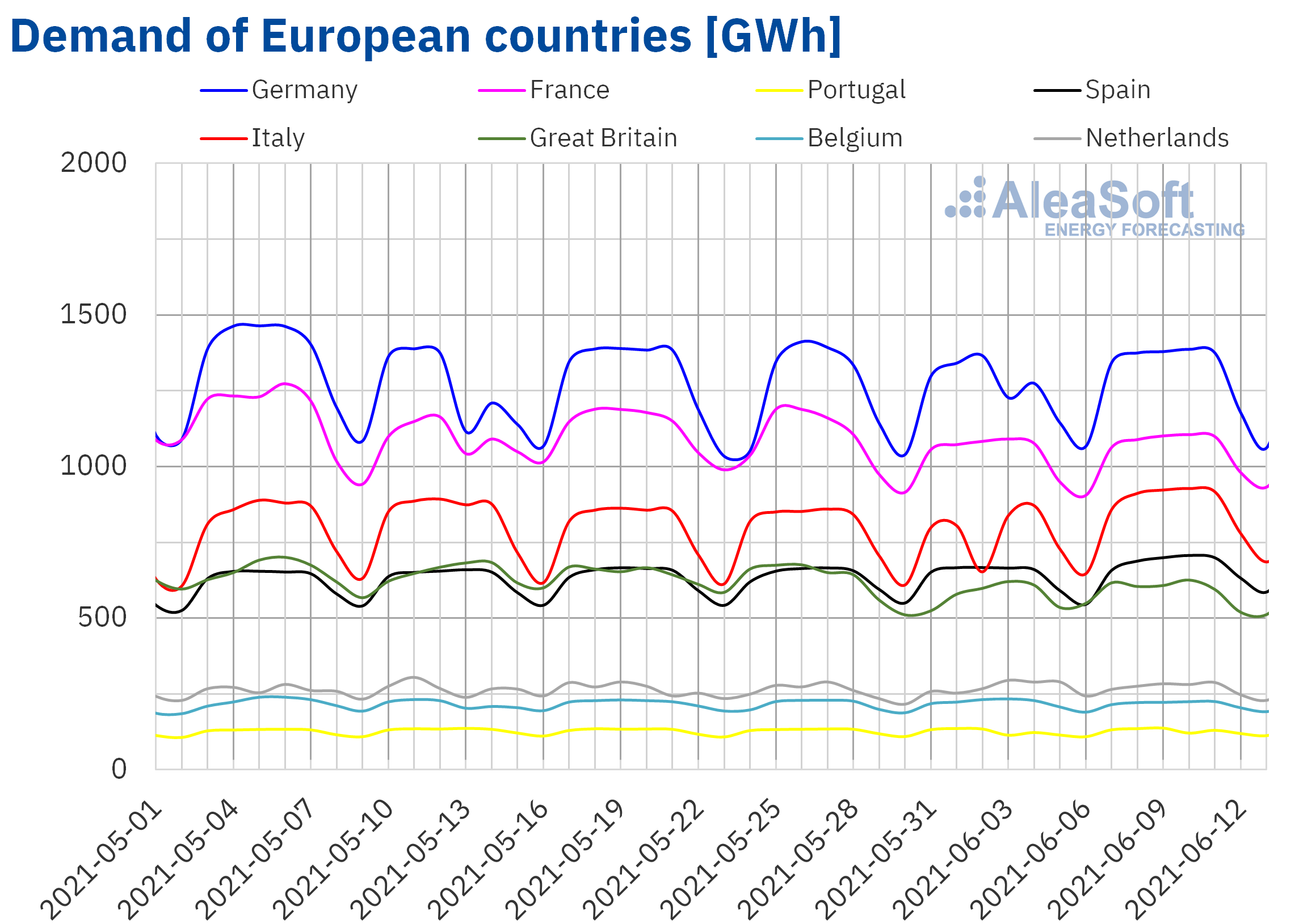 Although when analysing the whole of the second week of June there were no large price variations compared to the previous week, the daily prices from Monday to Friday, in general, were higher than those of the previous week. But over the weekend, prices fell in almost all markets. On Sunday, June 13, there were daily prices below €30/MWh in various markets. The lowest prices were those of the German and Nord Pool markets, of €19.40/MWh and €15.29/MWh respectively. Furthermore, on Saturday, June 12, and Sunday, June 13, negative hourly prices were reached in the markets of Germany, Belgium, France and the Netherlands. The lowest price, of ‑€36.72/MWh, was reached on Sunday, June 13, at hour 15 in all these markets. However, in the MIBEL, IPEX and N2EX markets, the prices for the weekend of June 12 were higher than those of the previous weekend, with values that differed by more than €40/MWh compared to those of neighbouring countries.

In the second week of June, the rising prices of CO2 emission rights and gas favoured the increase in prices in the European electricity markets. But the increase in wind and solar renewable energy production in most of the European continent during the last days of the week together with the decrease in demand over the weekend allowed prices to fall in almost all markets. 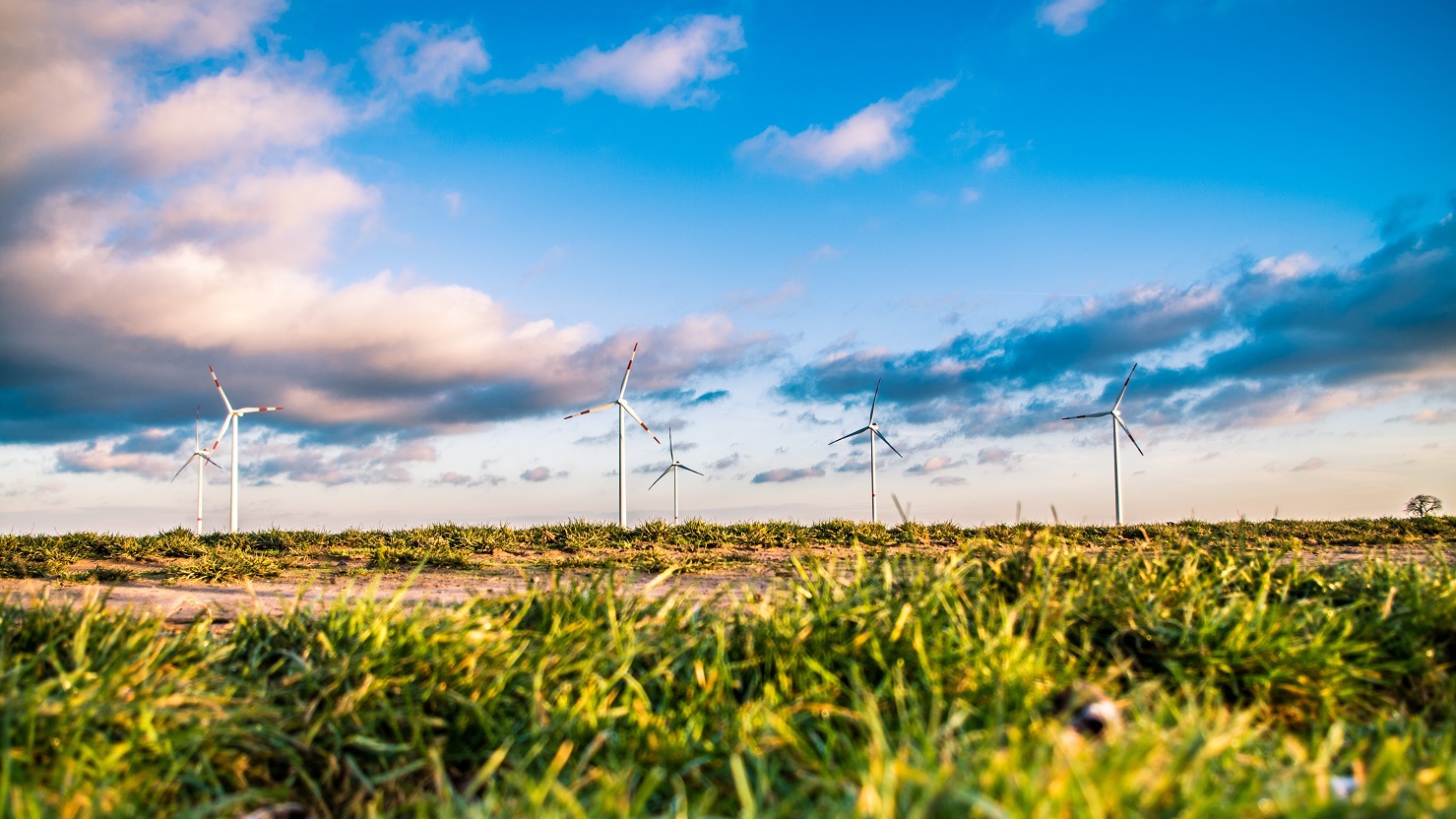 The AleaSoft‘s price forecasting indicates that during the week of June 14, prices will increase in most markets influenced by the increase in demand and the decrease in renewable energy production in some countries, factors that add to the current context of high gas and CO2 prices. 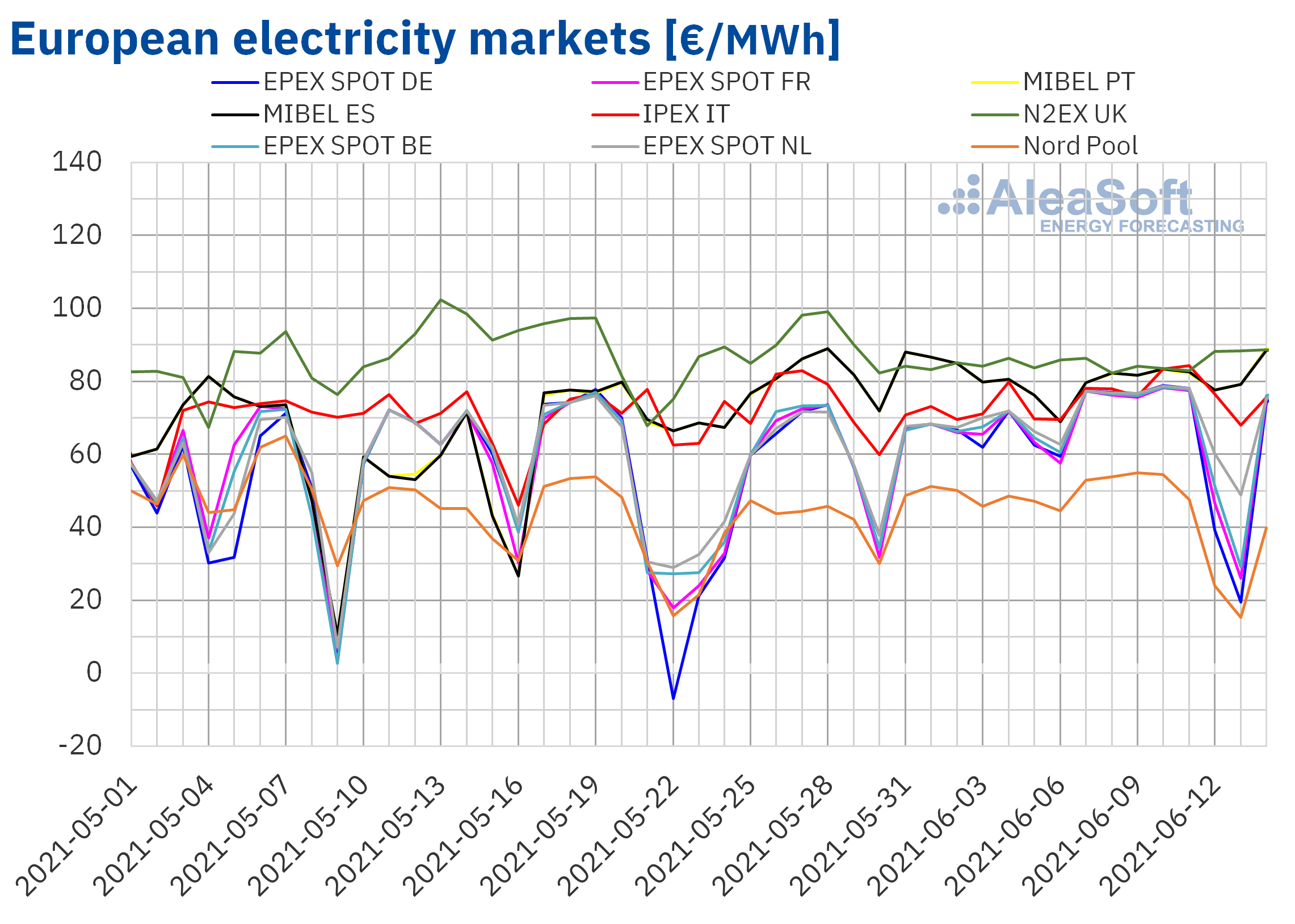 The electricity futures prices for the next quarter registered an almost general increase during the second week of June. The NASDAQ market of the Nordic countries was the only one in which prices fell, if the settlement prices of the sessions of June 4 and June 11 are compared. The OMIP market of Spain and Portugal, on the other hand, was the one where prices rose the most, with an increase of 9.2% in both countries, closely followed by the EEX market of Spain with a rise of 8.7% compared to the settlement price of Friday of the previous week. The ICE market in the Nordic countries was the one that registered the smallest increase, with a 1.2% increase. Meanwhile, in the rest of the markets the increases were between 3.7% and 7.9%.

Considering the electricity futures for the year 2022, during the same period the prices of the vast majority of markets analysed at AleaSoft increased. The increases were between 2.7% of the ICE market of the United Kingdom and 5.9% marked by the ICE market of Belgium and the Netherlands. The ICE and NASDAQ markets of the Nordic countries were the only markets in which prices fell, with decreases of 1.7% and 2.2% respectively.

During the second week of June, the Brent oil futures for the month of August 2021 in the ICE market, every day reached prices higher than those of the same days of the previous week. On Friday, June 11, the settlement price was $72.69/bbl, which was 1.1% higher than that of the previous Friday and the highest in the last two years.

The progressive recovery in demand, favoured by the advance in vaccination against COVID‑19, continued to exert its upward influence on the Brent oil futures prices in the second week of June. According to the latest report from the International Energy Agency, demand levels are expected to exceed those prior to the start of the pandemic in late 2022.

As for the TTF gas futures prices in the ICE market for the month of July 2021, during the second week of June they increased until reaching a settlement price of €28.69/MWh on Thursday, June 10. This price was 12% higher than that of the same day of the previous week and the highest in the last two years. However, prices fell on Friday. This day the settlement price was €27.84/MWh, still 7.9% higher than that of the previous Friday.

Regarding the CO2 emission rights futures in the EEX market for the reference contract of December 2021, they began the second week of June with an upward trend. On Thursday, June 10, the maximum settlement price of the week, of €53.78/t, was reached. This price was 7.0% higher than that of the previous Thursday and the highest since mid‑May. On Friday the settlement price fell to €52.67/t but it continued to be 5.4% higher than that of the previous Friday. 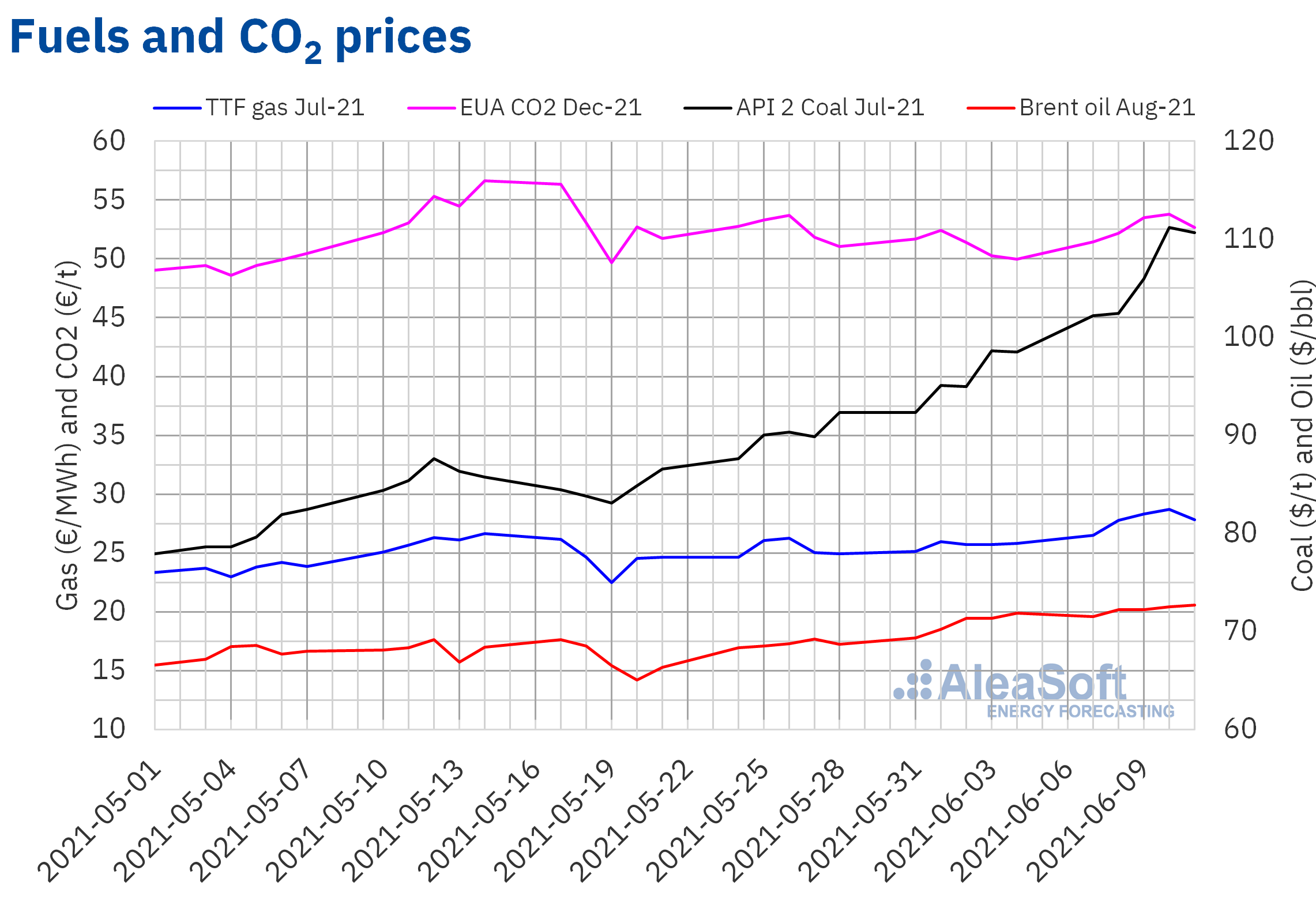 Last Thursday, June 10, the AleaSoft’s webinar “Prospects for energy markets in Europe. PPA and their importance for large consumers. Vision of the future” was held. The webinar analysed the evolution and prospects for the European energy markets and the importance of PPA for large and electro‑intensive consumers. The analysis table had the participation of Fernando Soto, Director‑General of Asociación de Empresas con Gran Consumo de Energía (AEGE), who valued the measures included in the Statute of electro‑intensive consumers.

In the next AleaSoft’s webinar, which will be held on July 15, the evolution of the European energy markets during the first half of 2021 and the prospects for the second half of the year will be analysed. In addition, the AleaSoft‘s vision of the future will be discussed regarding the role that green hydrogen will have in the energy transition and the decarbonisation of sectors that currently have a great weight in greenhouse gas emissions in Europe, such as industry and transport.

At the beginning of July, the quarterly update of the long‑term European markets prices curves will be carried out at AleaSoft. As was seen in the AleaSoft’s webinars, having a vision of the future of the electricity markets prices that covers the years of lifetime of the plant is a fundamental input when contracting a PPA and in general in the financing of renewable energy projects.

PrevAnterior“PPA can help the electro intensive industry, but must be at competitive prices”
SiguienteOpportunities for renewable energy in the United StatesNext
Menu
Facebook-f Twitter Linkedin Instagram