AleaSoft Energy Forecasting, May 9, 2022. In the first week of May, hourly or daily solar photovoltaic energy production records were registered in the markets of Spain and Portugal and values among the highest in history in France. In the Iberian Peninsula, the wind energy production increased compared to the previous week and in most markets the demand decreased. This combination of factors caused prices to fall in most European electricity markets. CO2 prices increased and once again exceeded €90/t.

In the first week of May, the solar energy production increased by 12% in Germany and 2.6% in the Iberian Peninsula compared to the last week of April. In Spain, on May 6, the photovoltaic and solar thermal energy as a whole totalled 143 GWh, the highest value in history, favoured in large part by the high photovoltaic energy production, which that day registered the maximum instantaneous production to date, of 12 335 MWh at 14:00. In Portugal, May 7 and 8 were the days with the highest solar energy production in history, with a total that exceeded 10 GWh each day. On the other hand, in Italy and France the solar energy production fell by 32% and 3.7%, respectively, in the week of May 2. Although the production with this technology fell in the French market for the week as a whole, on May 7 the third highest value in history was registered, of 75 GWh, after 79 GWh of April 26 and 78 GWh of May 1, both of this year.

In the second week of May, the solar energy production is expected to increase in Germany and Italy and to decrease in Spain, according to AleaSoft Energy Forecasting’s forecasts. 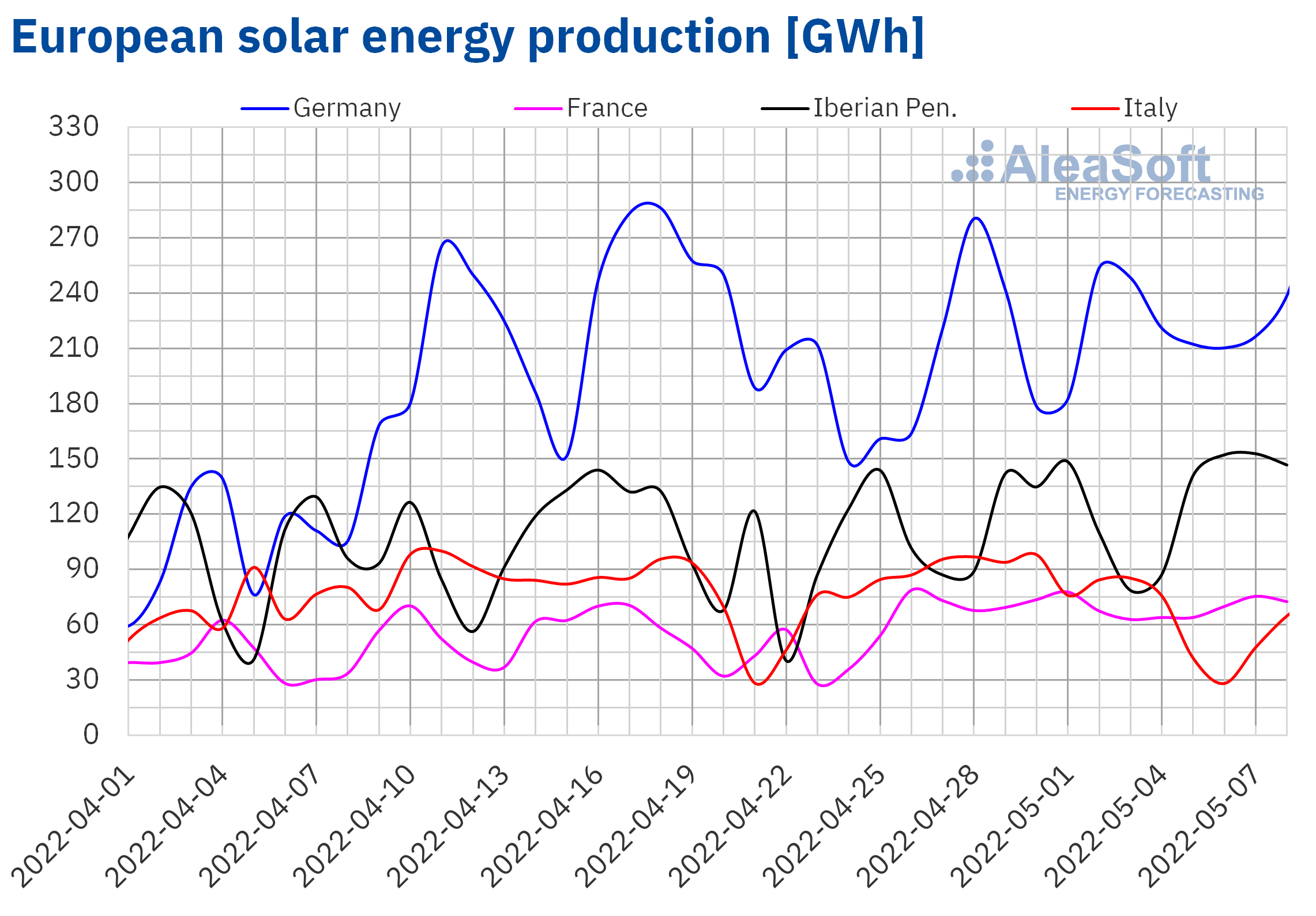 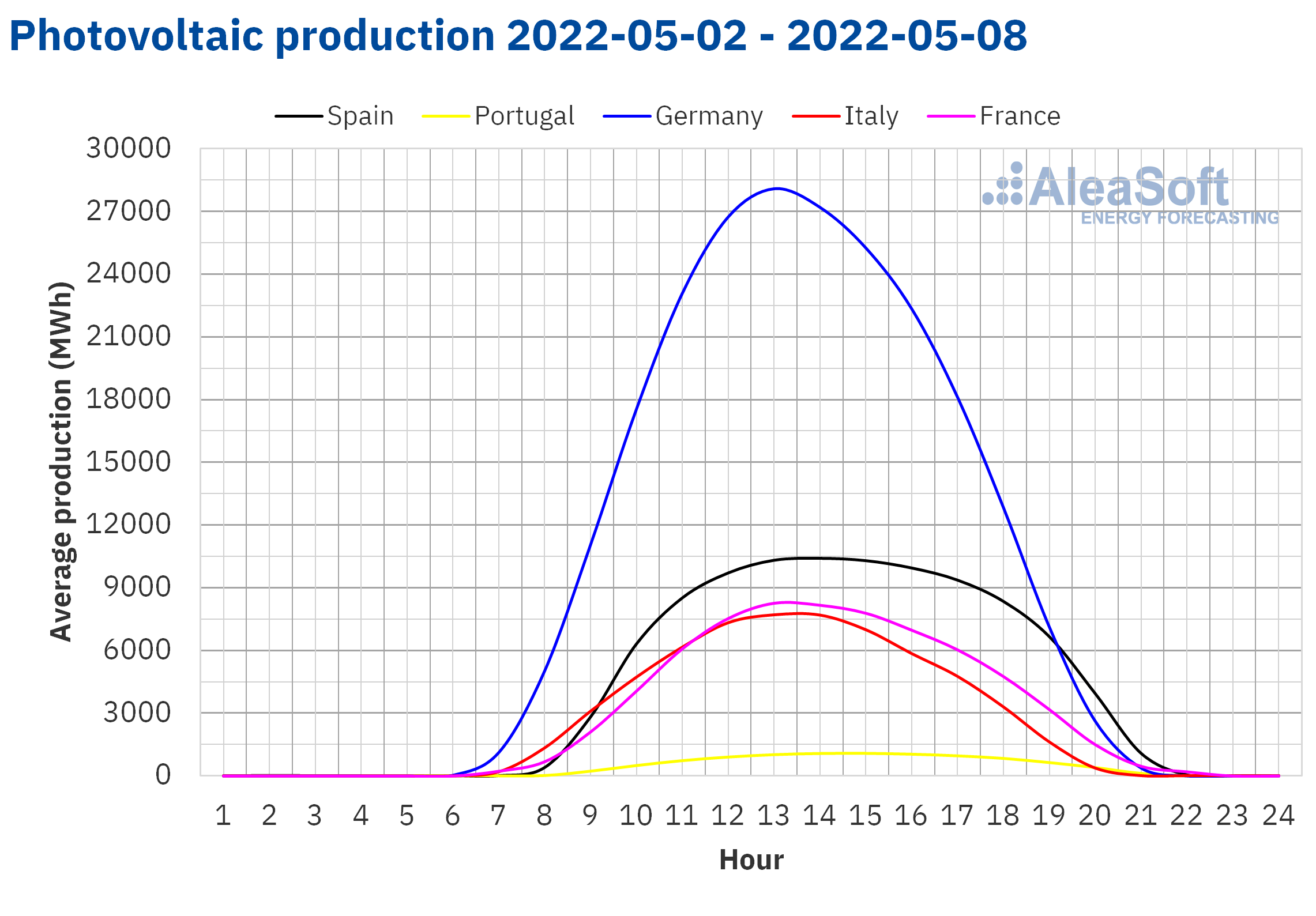 In the week that began on May 2, the wind energy production increased compared to the previous week in the Iberian Peninsula. In Spain the increase was 114% and in Portugal 23%. However, in the rest of the markets analysed at AleaSoft Energy Forecasting, the production with this technology decreased, registering the largest decrease in France, which was 17%.

In the week of May 9, AleaSoft Energy Forecasting’s forecasts indicate that there will be a significant increase in wind energy production in Germany and that it will rise slightly in France, while in the rest of the analysed markets the production with this technology will decrease. 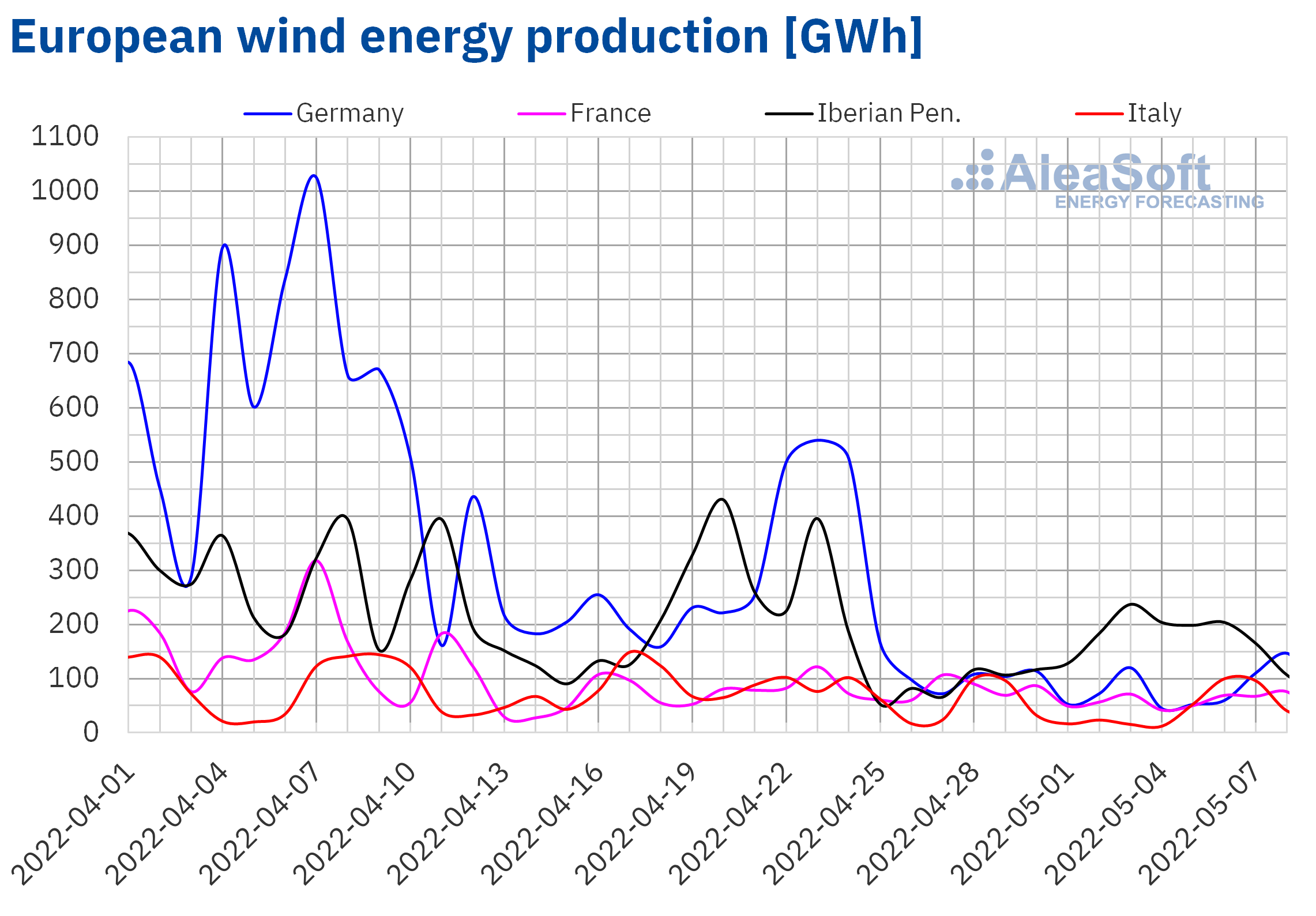 In the first week of May, the electricity demand decreased in most of the analysed European markets compared to the previous week. The largest decrease was registered in the British market, with a drop of 5.9%. In the markets of the Netherlands and Spain, the demand decreased by 1.4% in both cases, while in the markets of France, Germany and Belgium the decreases were between 0.1% and 0.9%. Most of the decreases in demand were favoured by less cold temperatures during the period. In some of the markets, the effect of the May 2 holiday, which was celebrated in Great Britain and in some autonomous communities of Spain, also influenced. However, in the markets of Portugal and Italy, the demand recovered by 0.5% and 6.3% respectively, after the April 25 holiday celebrated the previous week in both countries.

For the week of May 9, AleaSoft Energy Forecasting’s forecasts indicate a recovery in the demand of the markets of Spain, Portugal, Italy and the Netherlands. On the other hand, for the rest of the markets it is expected that the demand will continue to fall, favoured mainly by the increase in temperatures. 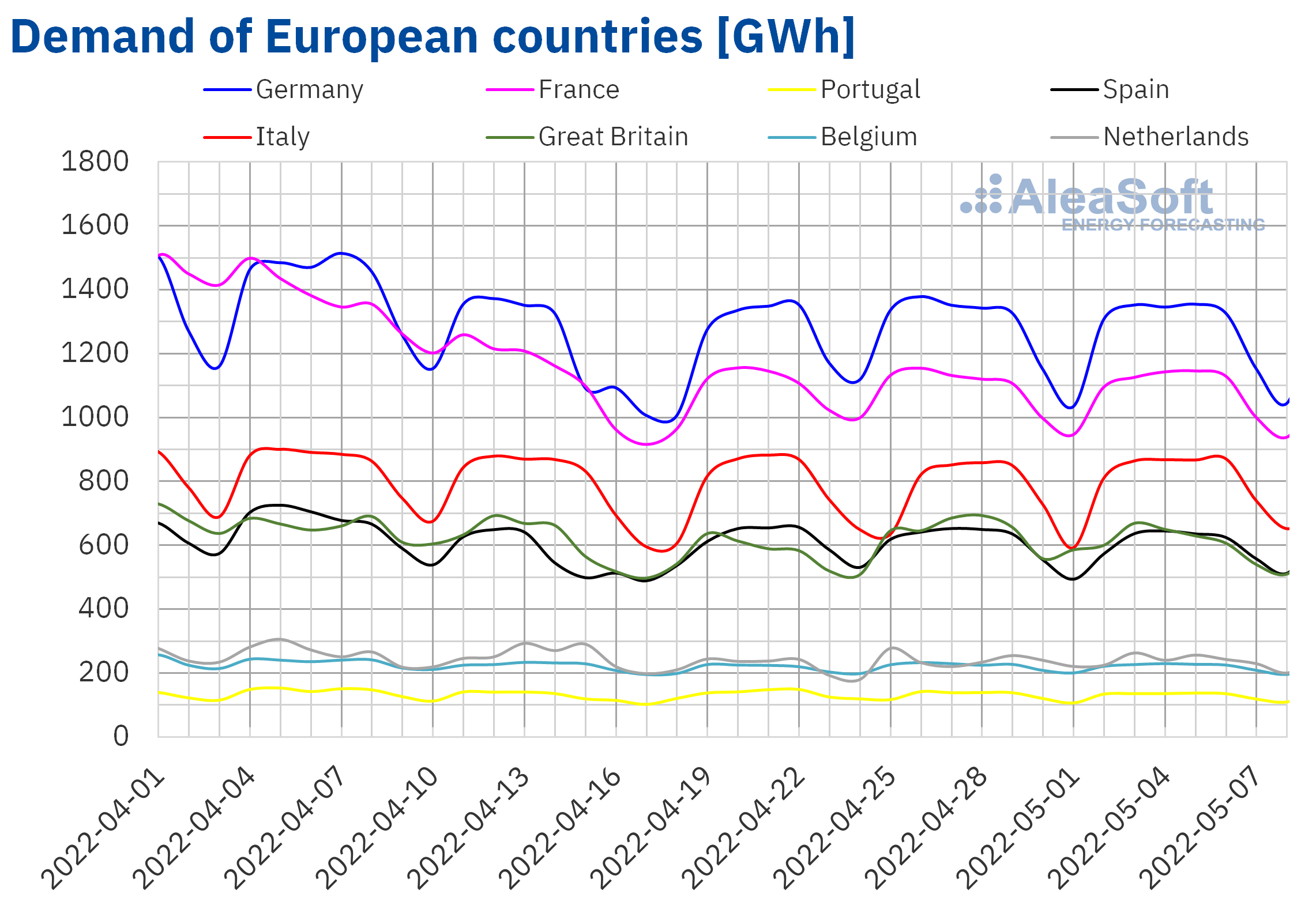 In the week of May 2, prices of almost all European electricity markets analysed at AleaSoft Energy Forecasting fell compared to the previous week. The exception was the IPEX market of Italy, with a rise of 2.1%. On the other hand, the largest drop in prices was that of the Nord Pool market of the Nordic countries, of 18%, while the smallest decrease, of 1.7%, was that of the EPEX SPOT market of the Netherlands. In the rest of the markets, the price decreases were between 2.1% of the EPEX SPOT market of Belgium and 10% of the MIBEL market of Spain and Portugal.

In the first week of May, average prices were below €220/MWh in almost all analysed electricity markets. The exception was the Italian market with a weekly average of €241.84/MWh. On the other hand, the lowest weekly average, of €130.37/MWh, was registered in the Nord Pool market. In the rest of the markets, prices were between €178.98/MWh of the N2EX market of the United Kingdom and €215.40/MWh of the French market. 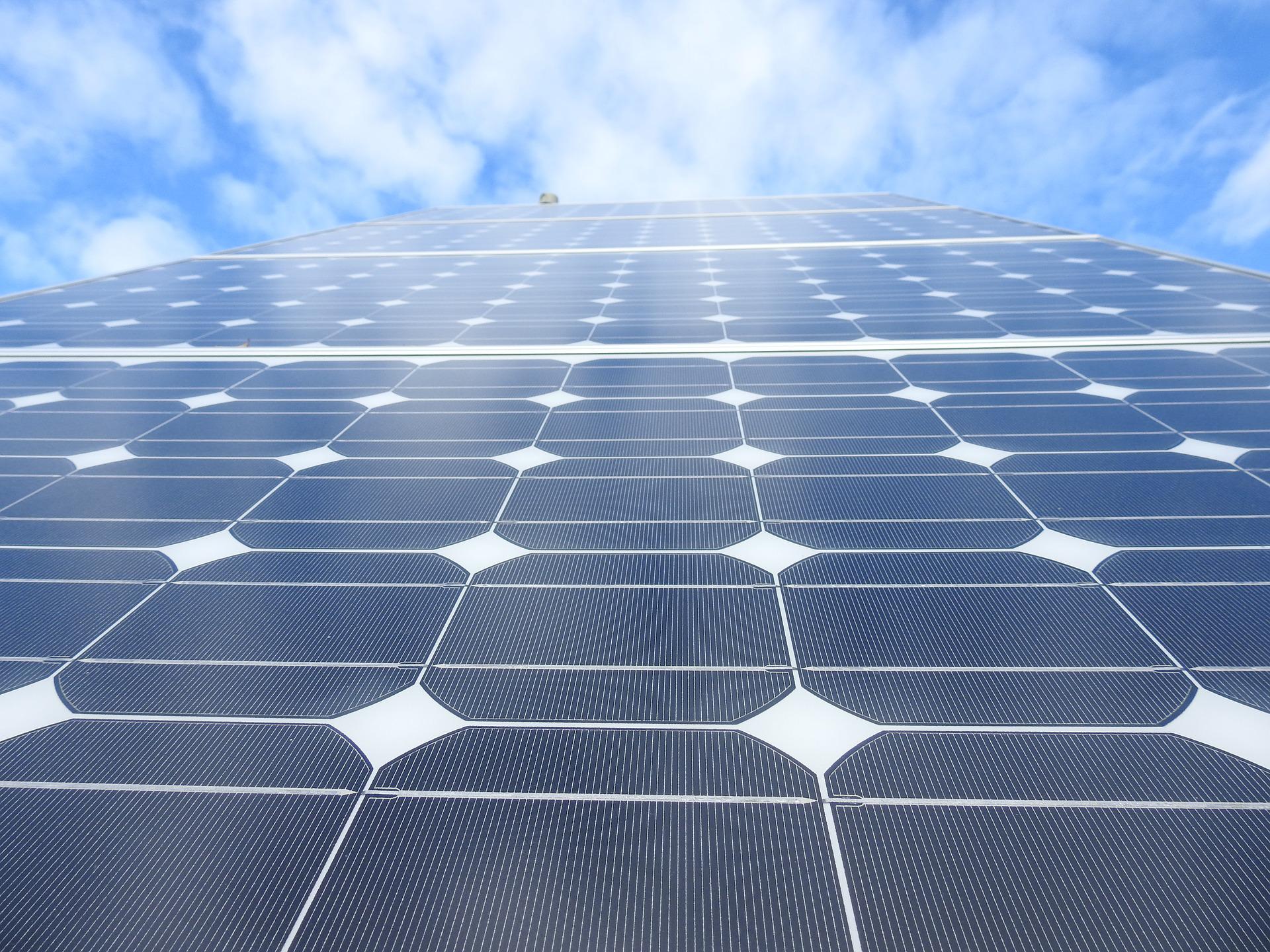 The AleaSoft Energy Forecasting’s price forecasting indicates that in the week of May 9, prices might fall in most European electricity markets influenced by the decrease in demand and the increase in wind energy production in countries such as Germany or France. However, in the Iberian and Italian markets, prices might increase favoured by the decrease in wind energy production and larger demand. 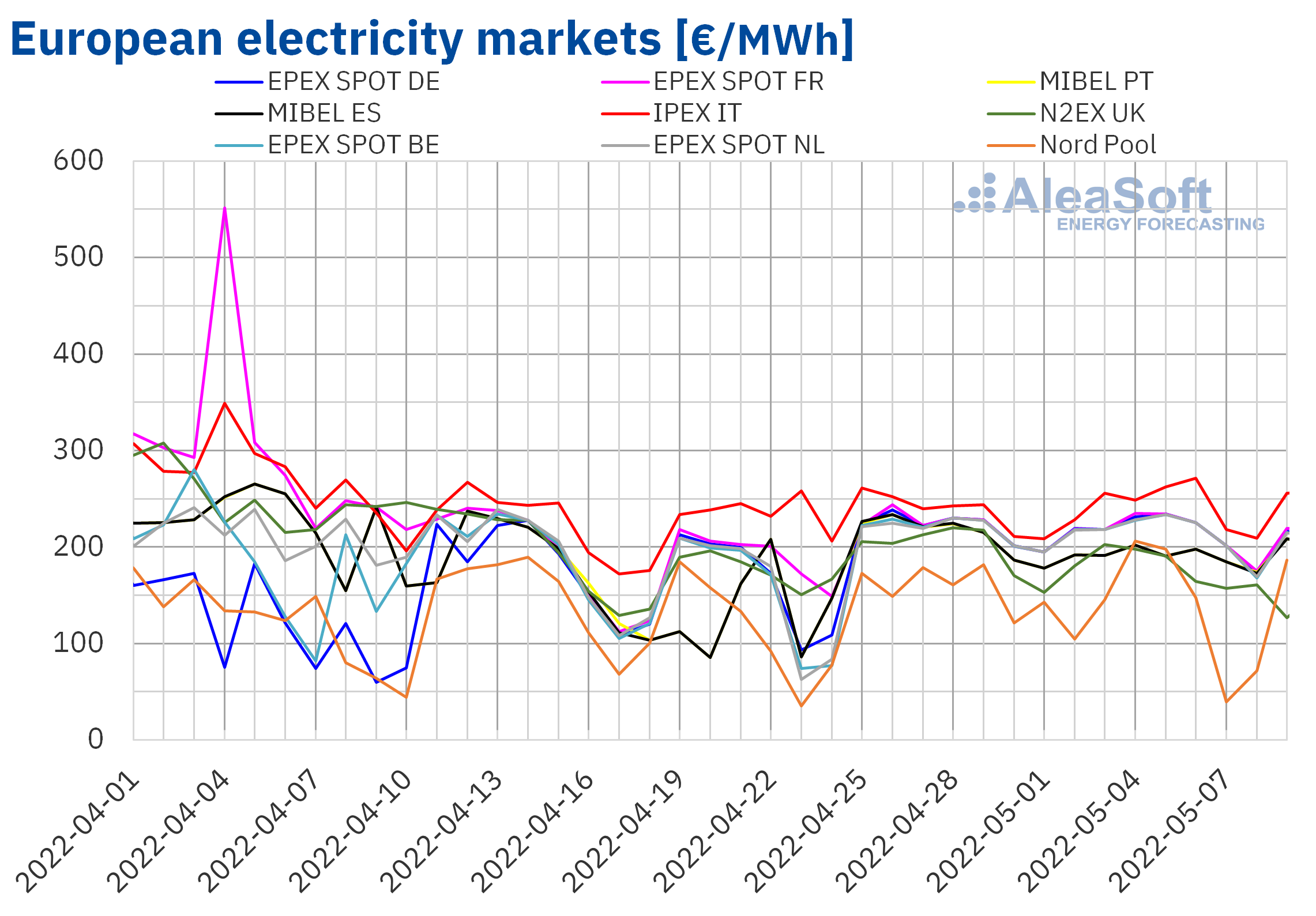 The electricity futures prices for the third quarter of 2022 registered an increase in most European markets, when comparing the settlement prices of the session of May 6 with those of the session of April 29. The largest increases, around 15%, occurred in the EEX market of Spain and the OMIP market of Spain and Portugal. A significant increase of 6.2% was also registered in the EEX market of France. In the rest of the markets where prices rose, the increases were between 1.8% and 4.6%. The exceptions were the ICE and NASDAQ markets of the Nordic countries, which registered a decrease in the settlement price of 2.4% and 3.4%, respectively.

Regarding the settlement prices of electricity futures for the next year 2023, between the sessions of April 29 and May 6 there was a general rise in all European electricity futures markets analysed at AleaSoft Energy Forecasting. The largest increase occurred in the EEX market of France and was 17%. In the rest of the markets, the increases ranged between 7.9% and 12%.

The negotiations of the European Union to establish sanctions on oil imports from Russia influenced the evolution of prices in the first week of May. However, several countries requested exceptions and a definitive proposal has not yet been reached. Instead, on Sunday, May 8, G7 member states pledged to stop importing Russian oil. On the other hand, on Thursday, May 5, the OPEC+ agreed to continue with the planned increases in production, increasing its production by 432 000 barrels per day as of June.

As for the settlement prices of TTF gas futures in the ICE market for the Front‑Month, they increased almost the entire first week of May. As a consequence, on Thursday, May 5, the highest settlement price of the week, of €106.51/MWh, was reached. This price was 6.4% higher than that of the same day of the previous week. However, on Friday prices fell by 4.5% to €101.71/MWh, favoured by stable gas flows from Russia. However, concerns about potential supply disruptions related to the conflict in Ukraine remain.

Regarding CO2 emission rights futures in the EEX market for the reference contract of December 2022, on Monday, May 2, they registered a settlement price of €83.05/t, which was €1.40/t lower than that of the last session of the previous week. However, the rest of the first week of May prices increased and, as a consequence, they exceeded €90/t again at the end of the week. The maximum settlement price of the week, of €91.54/t, was reached on Friday, May 6. This price was 8.4% higher than that of the previous Friday and the highest since the end of February. An increase in the use of coal may be contributing to the increase in emission rights prices. 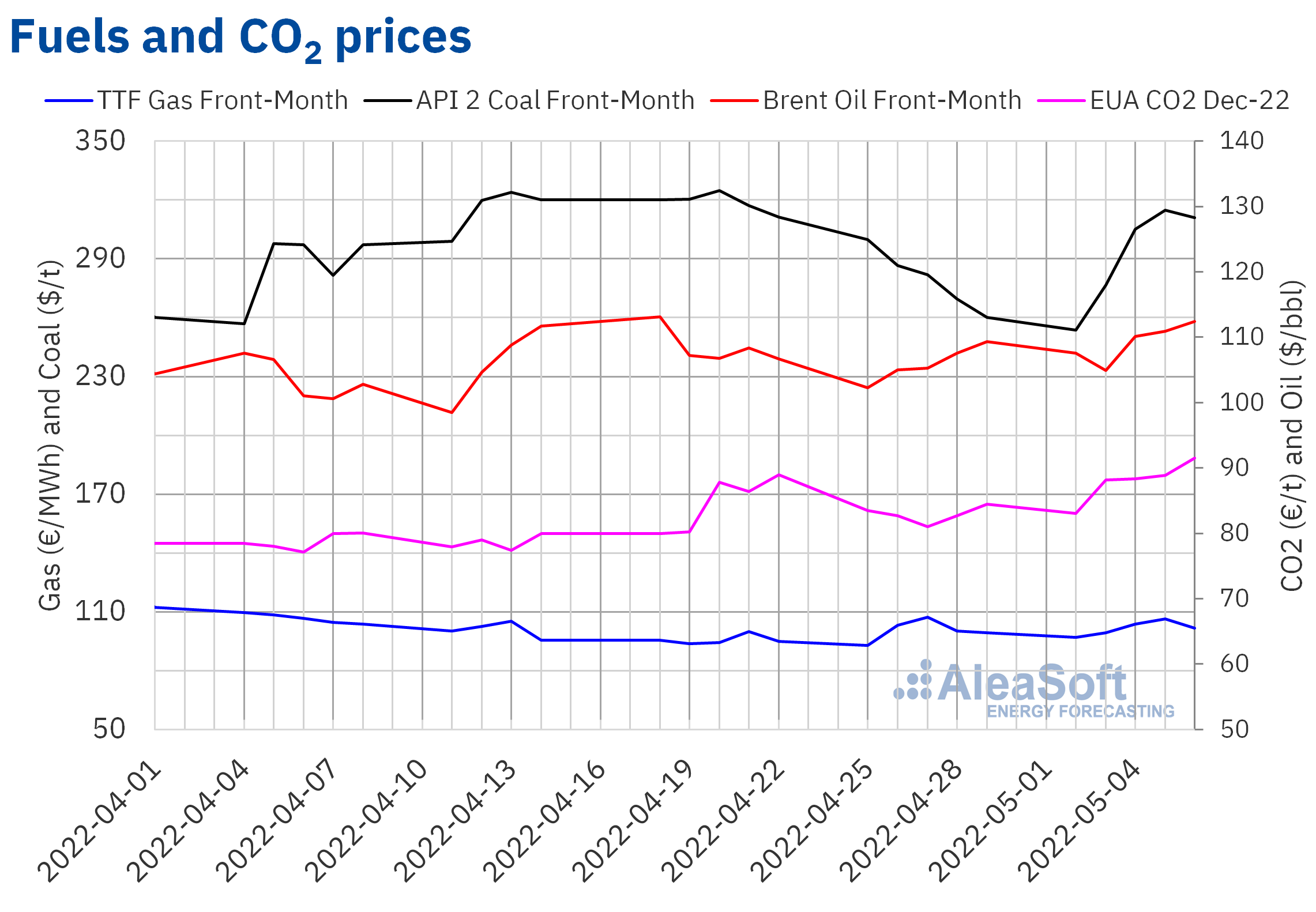 On next Thursday, May 12, a new edition of the AleaSoft Energy Forecasting’s monthly webinars will be held. The speakers will be Oriol Saltó i Bauzà and Alejandro Delgado, both Associate Partners at AleaGreen, who will be accompanied at the analysis table of the Spanish version of the webinar by experts with extensive experience in the energy sector, who have collaborated with AleaSoft Energy Forecasting for more than fifteen years: Alberto Ceña Lázaro, CEO of BEPTE, S.L., Antonio Canoyra Trabado, associate professor at the Department of Electric Power at the Comillas Pontificial University (ICAI), and Francisco Del Río, energy management expert.

The webinar will analyse the current regulatory issues, such as the gas price limit in the Iberian electricity market, which is expected to be approved in the coming days, as well as the importance of energy markets price forecasting for renewable energies development. In addition, the evolution of the energy markets in recent weeks and the prospects in the mid‑ and long‑term will be analysed, the use of the Alea Energy DataBase (AleaApp) for the compilation and analysis of energy markets data will be explained and AleaGreen, the new division of AleaSoft Energy Forecasting, created in January 2022, will be presented, which is specialised in long‑term price curves forecasting reports for European markets.