AleaSoft Energy Forecasting, June 3, 2022. The rise in gas prices and, consequently, in electricity prices, due to the Russian invasion of Ukraine caused a drop in the electricity and gas demand in 2022. The drop in the hydroelectric generation led to an increase in the production of combined cycle gas turbines and a doubling of coal production. Renewable energy generation as a whole fell 11% in the first five months of 2022, despite the fact that photovoltaic energy stands out with a 40% increase in production.

The period of the first five months of 2022 just ended. A year 2022 that already began with historically high prices in the energy markets and that the Russian invasion of Ukraine made even more complex. Geopolitical tensions and Russian gas sanctions pushed gas prices to record highs, leading to all‑time highs also in electricity markets across Europe. Comparing the first five months of 2022 with the same period in 2021 and previous years, some interesting conclusions can be drawn. Some of them are a consequence of the situation of high prices in the energy markets, and others have not helped to improve it.

The most outstanding figure involves solar photovoltaic energy generation, which registered an increase of 40% in the first five months of 2022 compared to the same months of the previous year, thanks to the new 3.1 GW installed of this technology, which represents a capacity growth of 25%. Wind energy capacity also increased in the last year, although in a much more modest way: 952 MW were installed, which represents an increase of 3.5% of the wind energy capacity. Even so, the weather conditions were not favourable for wind energy at the beginning of the year and production fell by 3.6% between January and May, compared to that period in 2021. 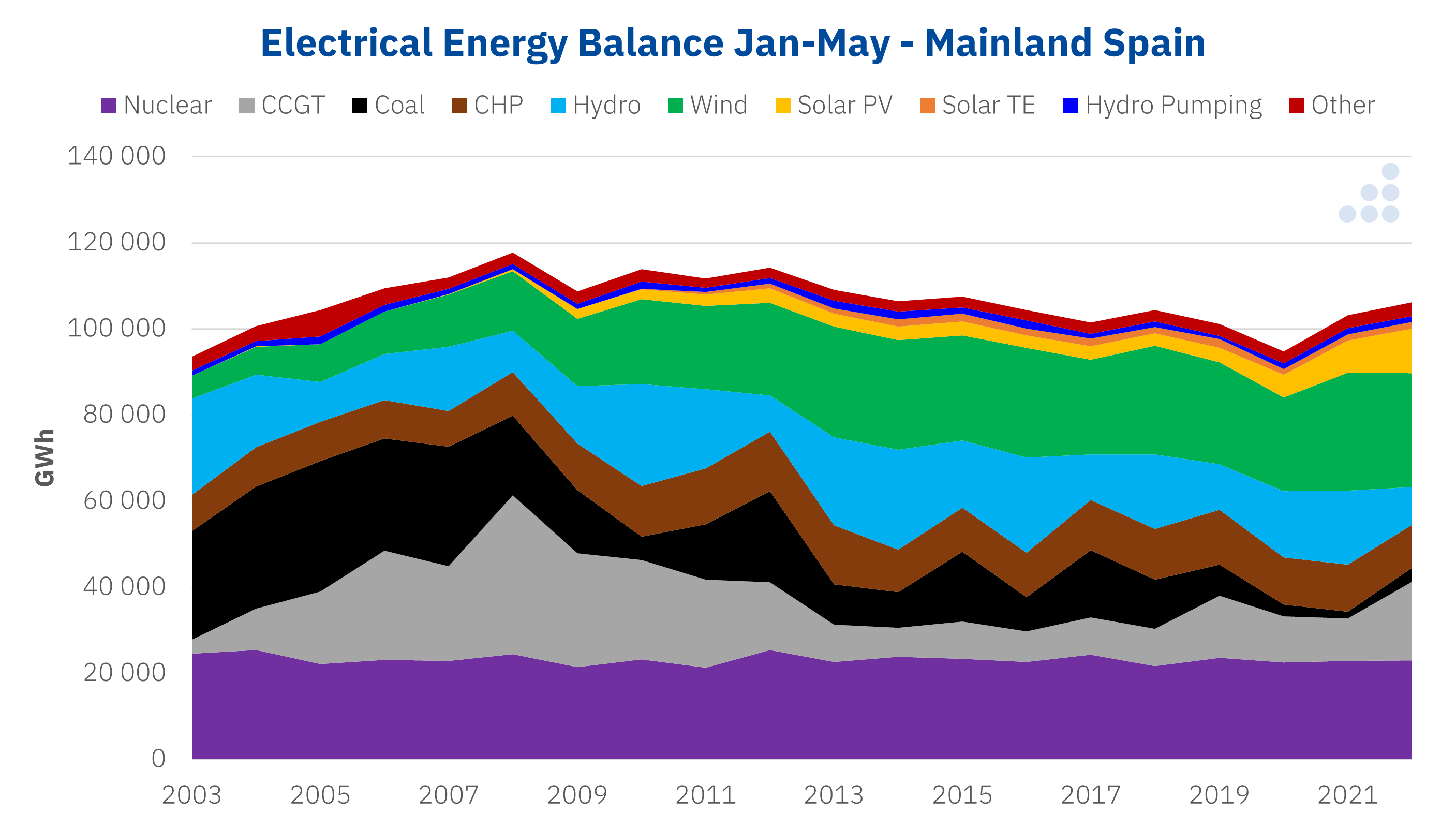 For its part, the low hydroelectric energy production in Spain between January and May 2022 amounted to 8666 GWh, which represents a drop of 50% compared to the first five months of 2021, and becomes one of the historically lowest periods of the last decades, only above those months of 2012.

This gap left by the hydroelectric energy was filled by the combined cycle gas turbines, which in these five months generated 86% more electricity than in the same months of 2021. Also coal, which at the beginning of 2021 had the lowest production in history, increased its production by 103% in this period of 2022, favoured by the high gas prices that made generation with combined cycles more expensive. 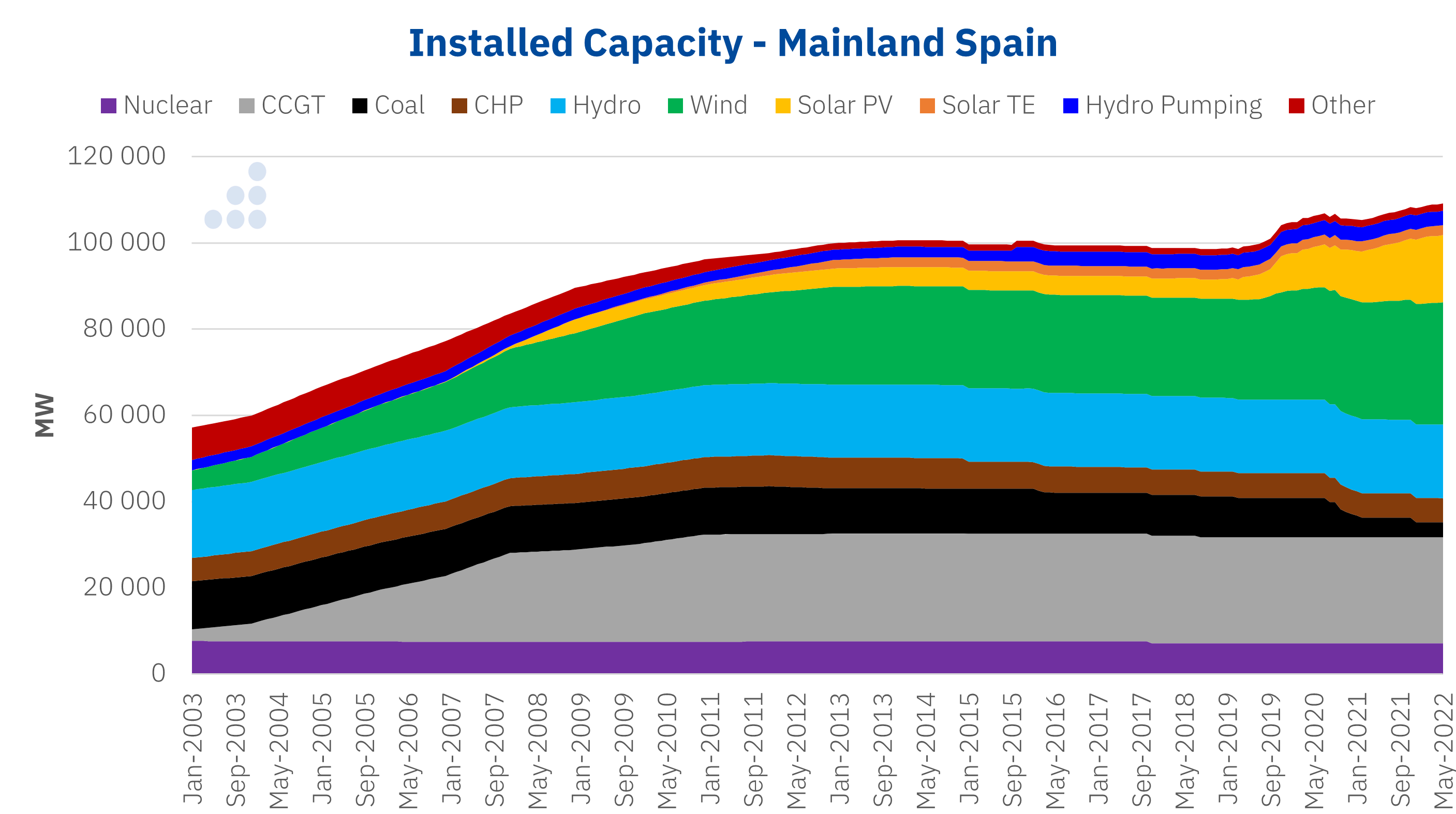 The electricity demand between January and May 2022 was 2.7% lower than during the same months of 2021. A drop favoured by a slightly milder winter, but also as a consequence of the electricity market prices that are affecting to industry in general, but above all to the electro‑intensive industry.

The gas demand also registered a year‑on‑year drop of 8.8% from January to May due to the impact of high energy prices on industrial production. On the other hand, there is the gas demand for the electricity sector, which increased by 71% as a result of the increase in electricity production with combined cycle gas turbines. 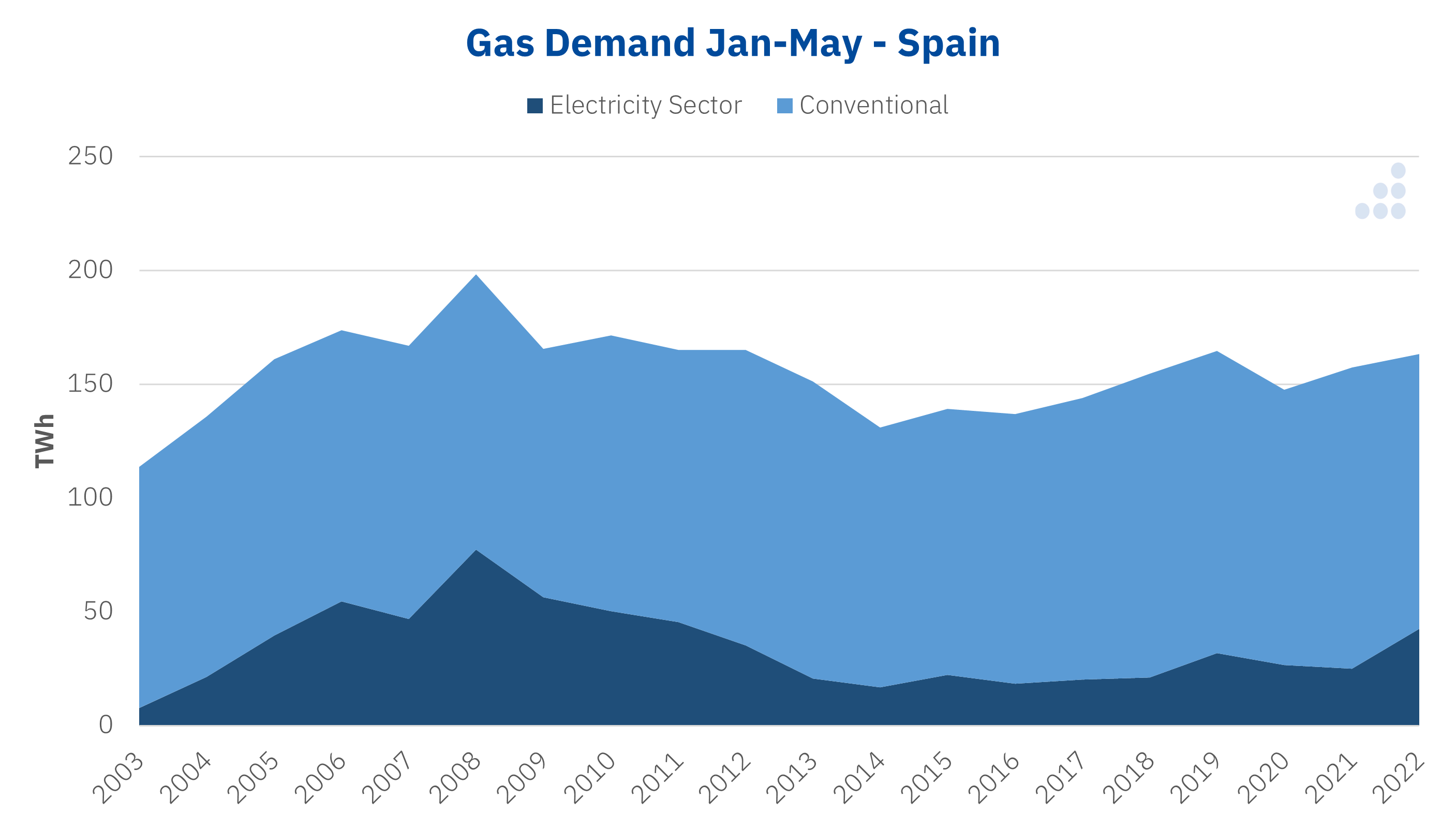 The series of monthly webinars organised by AleaSoft Energy Forecasting and AleaGreen allows you to follow current events in the energy sector in Europe and analyse its mid‑ and long‑term prospects. The June edition will be held on June 9 and will have speakers from Engie as guests. This will be the fifth time that Engie has participated in the monthly webinars, providing a very clear and interesting first‑hand view of the state of PPA and the renewable energy projects financing. Also, as usual, the current regulatory issues of the Spanish electricity sector and the perspectives of the energy markets in Europe for the second half of the year will be analysed.