Gas prices fell in May and dragged most European electricity markets

AleaSoft Energy Forecasting, June 1, 2022. The monthly average price was below €200/MWh in May in almost all European electricity markets. In most markets, prices fell compared to April, favoured by the drop in gas prices. Solar energy production increased in general which also helped push prices down. However, wind energy production fell and Brent and CO2 futures rose.

The solar energy production during the month of May increased in all the markets analysed at AleaSoft Energy Forecasting compared to the previous month. The largest rise was registered in the French market, with a 42% increase. In the Spanish market the increase between these periods was 28%. During the month of May, an increase in photovoltaic capacity of 121 MW was registered in the Spanish peninsular territory. In the German market there was also an increase in solar energy production of 28%, while in the Portuguese market, in which installed capacity increased by 40 MW in May, the production was 14% higher and in the Italian market 4.6% higher.

In the comparison with the month of May 2021, the solar energy production grew by 60% in Portugal. In the French market, the growth was 53% while in the rest of the markets it increased between 6% and 30%. 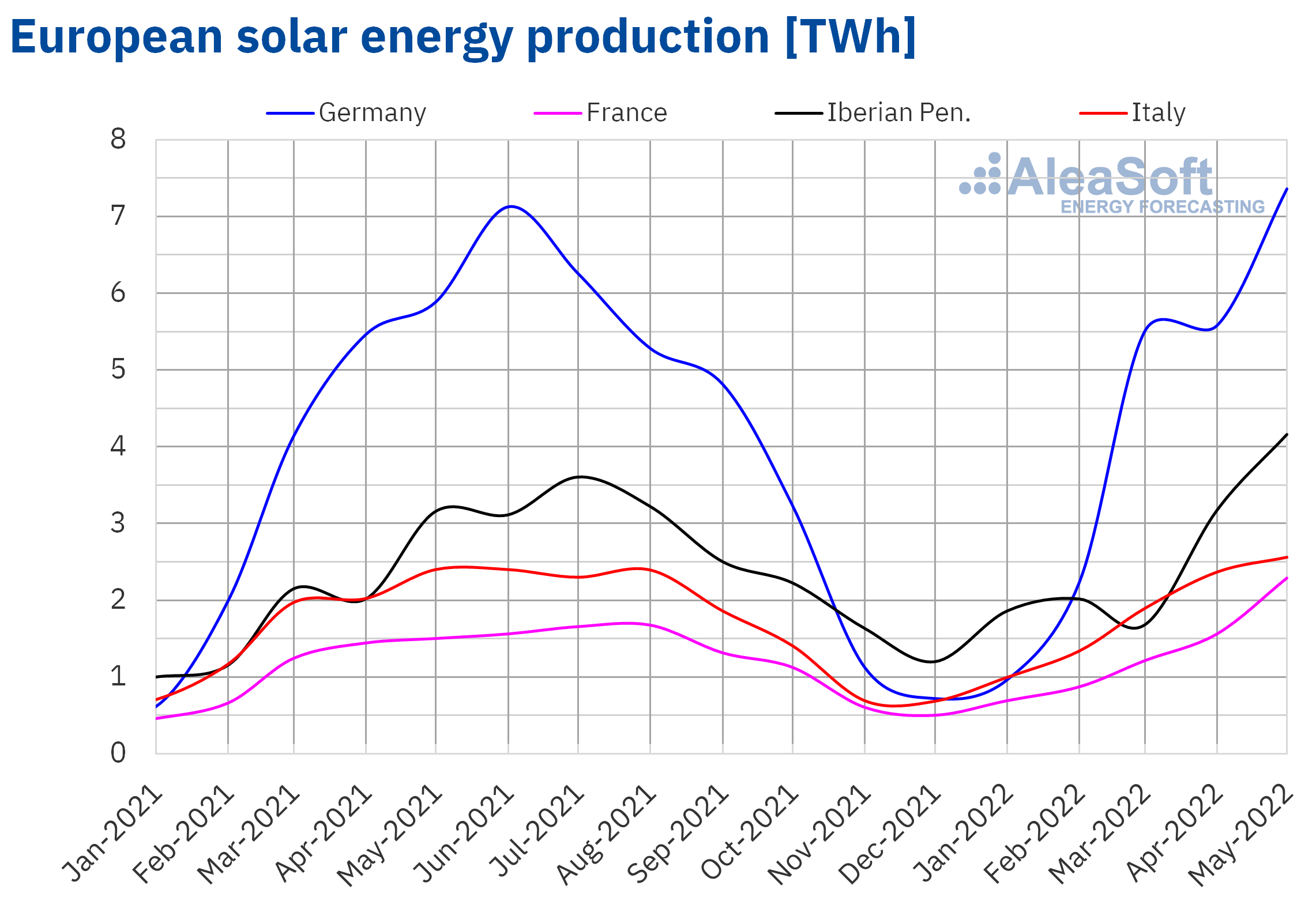 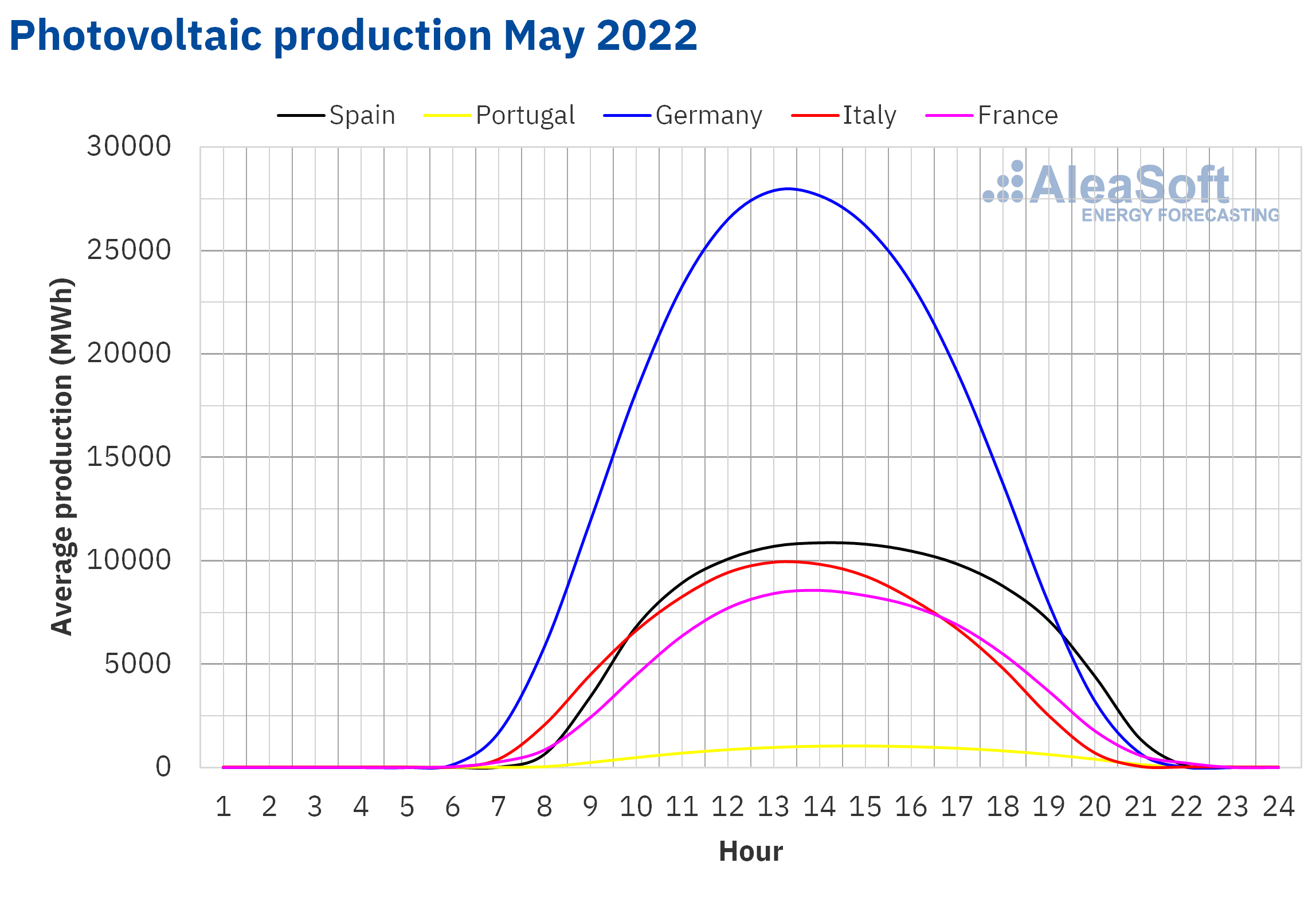 However, the wind energy production fell in a generalised way in May compared to April 2022 and May 2021.

In the comparison with the previous month, the largest decrease was registered in the Italian market and was 54%. In the rest of the markets, the decreases were between 21% of the Spanish market and 37% of the French market.

In the year‑on‑year comparison, France and Italy registered the largest falls, of 44% and 43% respectively. The market in which the production with this technology decreased less was the Spanish, by 2.1%.

In Mainland Spain, 128 MW of wind energy capacity were installed during the month of May. This technology remains the one with the highest installed capacity in the Spanish peninsular mix with a total of 28 308 MW installed. 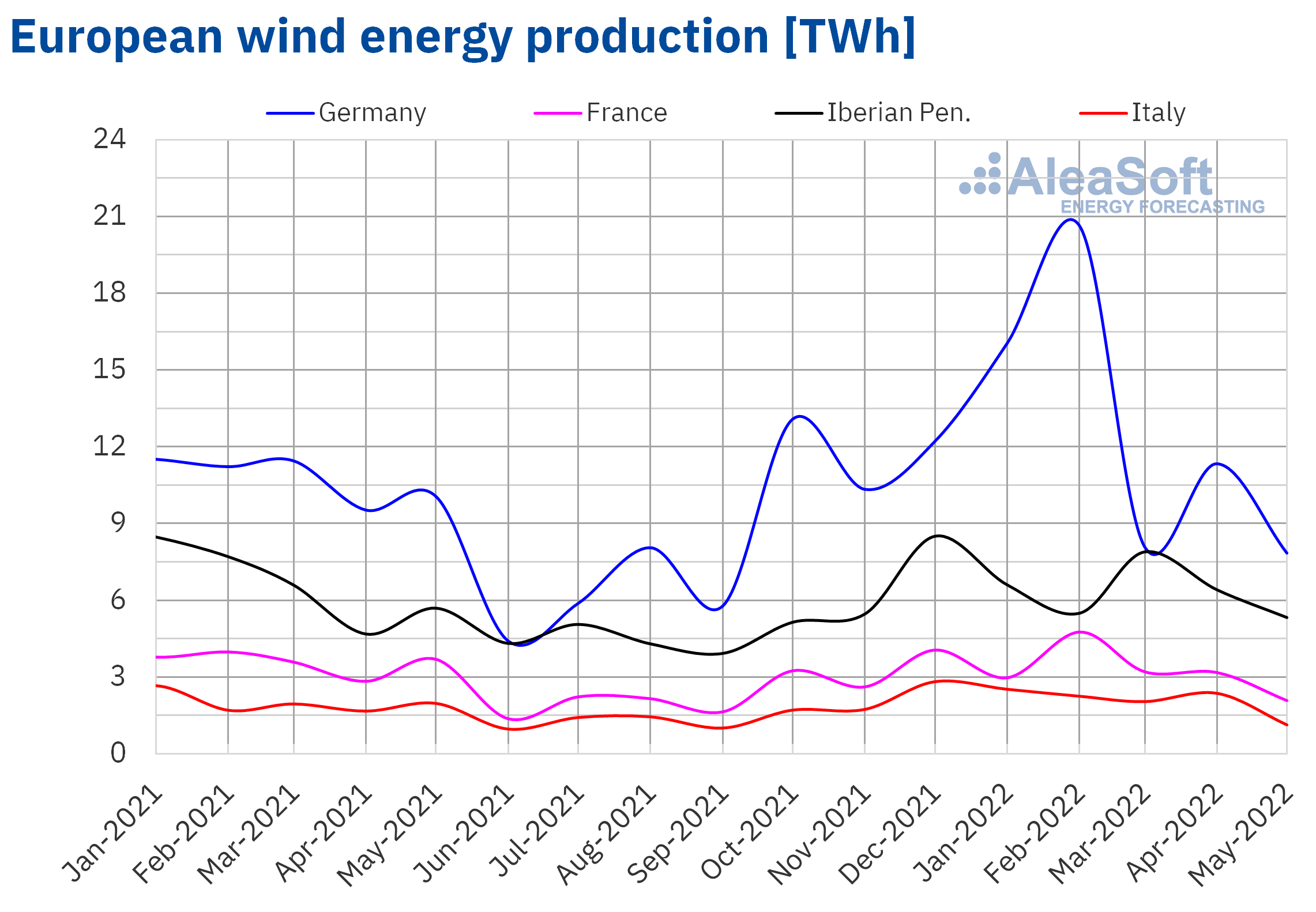 The electricity demand in May 2022 fell in most European electricity markets compared to the same month of the previous year. The largest year‑on‑year decreases in demand were registered in the markets of Great Britain, with 9.9%, and the Netherlands, with 9.2%. In the markets of France, Spain and Germany the falls were 5.8%, 1.2% and 0.8% respectively. The average temperatures during this period were higher than those registered during the same month of the previous year and favoured the decreases in demand. On the other hand, in the markets of Italy, Portugal and Belgium, the demand behaved inversely, registering increases that were between 4.8% of Italy and 1.1% of Belgium.

There were also decreases in demand in most European markets in the comparison of May 2022 with April of the same year. The largest decrease was registered in the French market, of 12%, followed by the decreases of the market of the Netherlands, of 8.7%, and of the British market, of 8.3%. In the markets of Belgium, Germany and Portugal the falls were 3.2%, 2.5% and 1.7% respectively. On the contrary, in the markets of Italy and Spain, the demand increased for this period by 3.7% and 0.2% in each case. 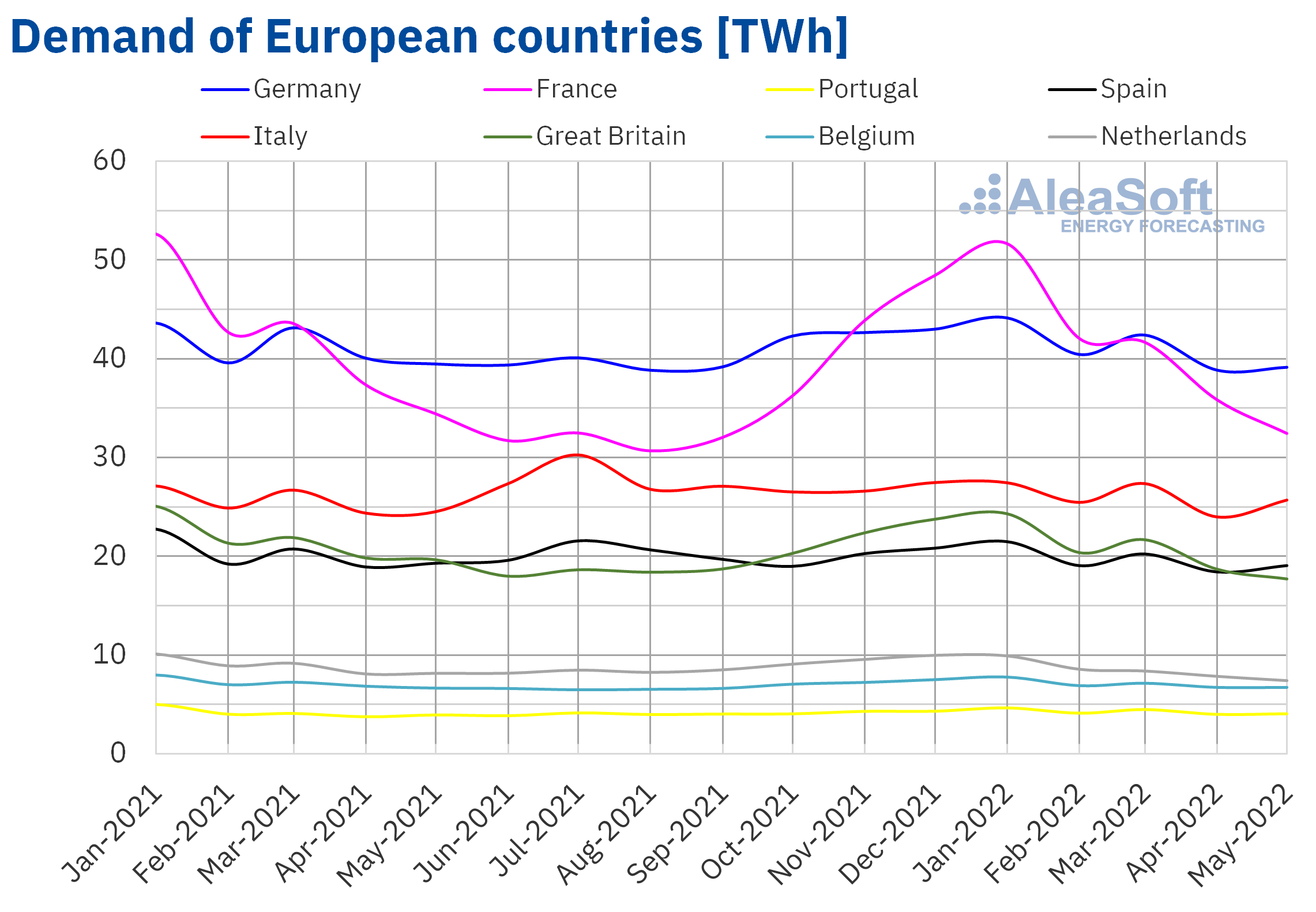 In the month of May 2022, the monthly average price was below €190/MWh in almost all European electricity markets analysed at AleaSoft Energy Forecasting. The exceptions were the IPEX market of Italy, with an average of €230.06/MWh, and the EPEX SPOT market of France, with €197.43/MWh. In contrast, the lowest monthly average price, of €113.61/MWh, was that of the Nord Pool market of the Nordic countries, followed by that of the N2EX market of the United Kingdom, of €146.95/MWh. In the rest of the markets, the averages were between €176.64/MWh of the EPEX SPOT market of Belgium and €187.15/MWh of the MIBEL market of Portugal.

Compared to the month of April 2022, in May the average prices fell in almost all European electricity markets analysed at AleaSoft Energy Forecasting. The exception was the German market with an increase of 7.1%. On the other hand, the largest fall, of 30%, was registered in the British market, while the smallest decreases were those of the MIBEL market of Spain and Portugal, of 2.3% and 2.5% respectively. The rest of the markets had price decreases between 5.3% of the Belgian market and 15% of the French and Nordic markets.

However, if the average prices of the month of May are compared with those registered in the same month of 2021, prices increased significantly in all markets. The smallest rise in prices was that of the British market, of 70%. In the rest of the markets, the price increases were between 157% of the Nord Pool market and 257% of the French market.

On the other hand, despite the fact that the monthly averages were above €110/MWh in all analysed markets, in May negative hourly prices were reached on several occasions in the markets of Germany, Belgium and the Netherlands. The lowest hourly price, of ‑€100.09/MWh, was the one registered in the Dutch market on May 27 at 13:00.

In the month of May, the general increase in solar energy production and the decrease in gas prices, as well as lower demand in most markets, allowed prices to fall compared to April in almost all analysed markets.

On the other hand, in May 2022, gas and CO2 emission rights prices were much higher than those of the same month of 2021. Wind energy production also decreased in a generalised way, reaching drops of more than 40% in France and Italy. As a consequence, prices increased in all analysed European electricity markets compared to May 2021. 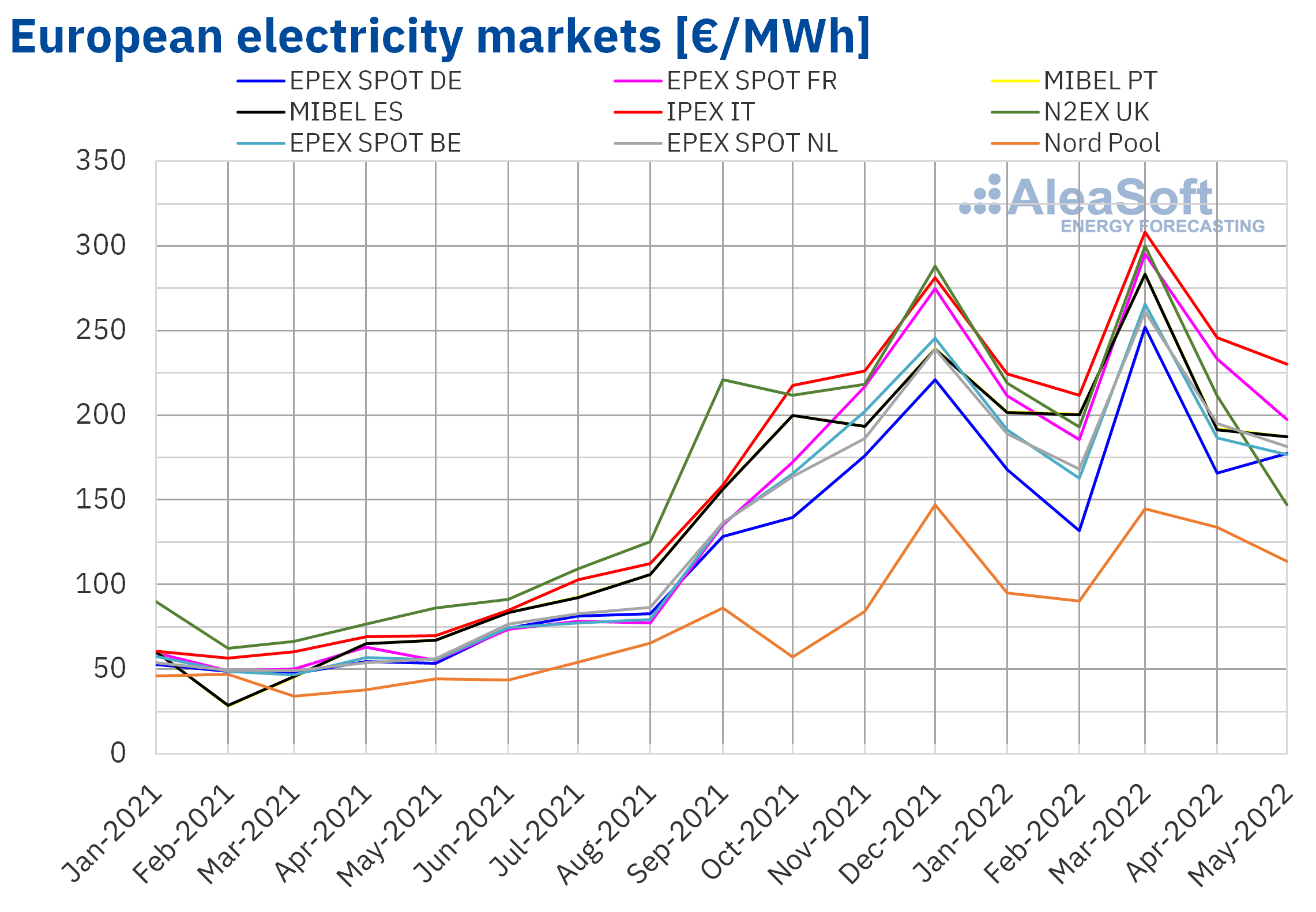 When analysing the first and last market sessions of the month of May, an uneven behaviour is observed in the electricity futures prices for the next quarter in the European markets analysed at AleaSoft Energy Forecasting. On the one hand, in the EEX market of Germany, France, Italy and the United Kingdom, as well as in the ICE market of the United Kingdom, Belgium and the Netherlands, prices registered variations both upwards and downwards of less than 3% in all cases. The one with the least variation was the EEX market of Italy, with a slight increase of €0.08/MWh. However, in the rest of the markets the increases were higher than 10% and reached 28% in the case of the ICE market of the Nordic countries, closely followed by the NASDAQ market of the same region.

As for electricity futures prices for the year 2023, the behaviour was a general rise. The EEX market of Germany registered the largest increase in prices, of 20%, closely followed by the EEX market of France, with 19%, and in third place, the OMIP market of Spain and Portugal with increases of 14% in both cases. The EEX market of Italy was where the smallest variation was registered, with an increase of 4.3%.

Brent oil futures for the Front‑Month in the ICE market registered settlement prices above $100/bbl during the month of May. The monthly maximum settlement price, of $122.84/bbl, was reached on Tuesday, May 31. This price was the highest since March and it was favoured by the sanctions agreed by the European Union on Russian oil. The European Union will stop importing oil from Russia by sea, although supplies to Hungary via pipeline are excluded from the sanctions.

During the month of May, in addition to the evolution of the conflict between Russia and Ukraine and the negotiations of the European Union to ban oil imports from Russia, the confinements in China due to the registered COVID‑19 outbreaks also exerted their influence on the evolution of prices. The improvement of the pandemic situation in this country will favour the recovery of the demand, which might contribute to the upward trend in prices.

The stability in supply allowed prices to fall during the month of May. However, various countries of the European Union have already stopped receiving gas from Russia because of refusing to pay for it in roubles and fears of interruptions in supply due to the conflict in Ukraine continue.

Regarding CO2 emission rights futures in the EEX market for the reference contract of December 2022, during the month of May 2022, their settlement prices remained above €78/t. The monthly maximum settlement price, of €91.72/t, was reached on Tuesday, May 17. This price was the highest since February. 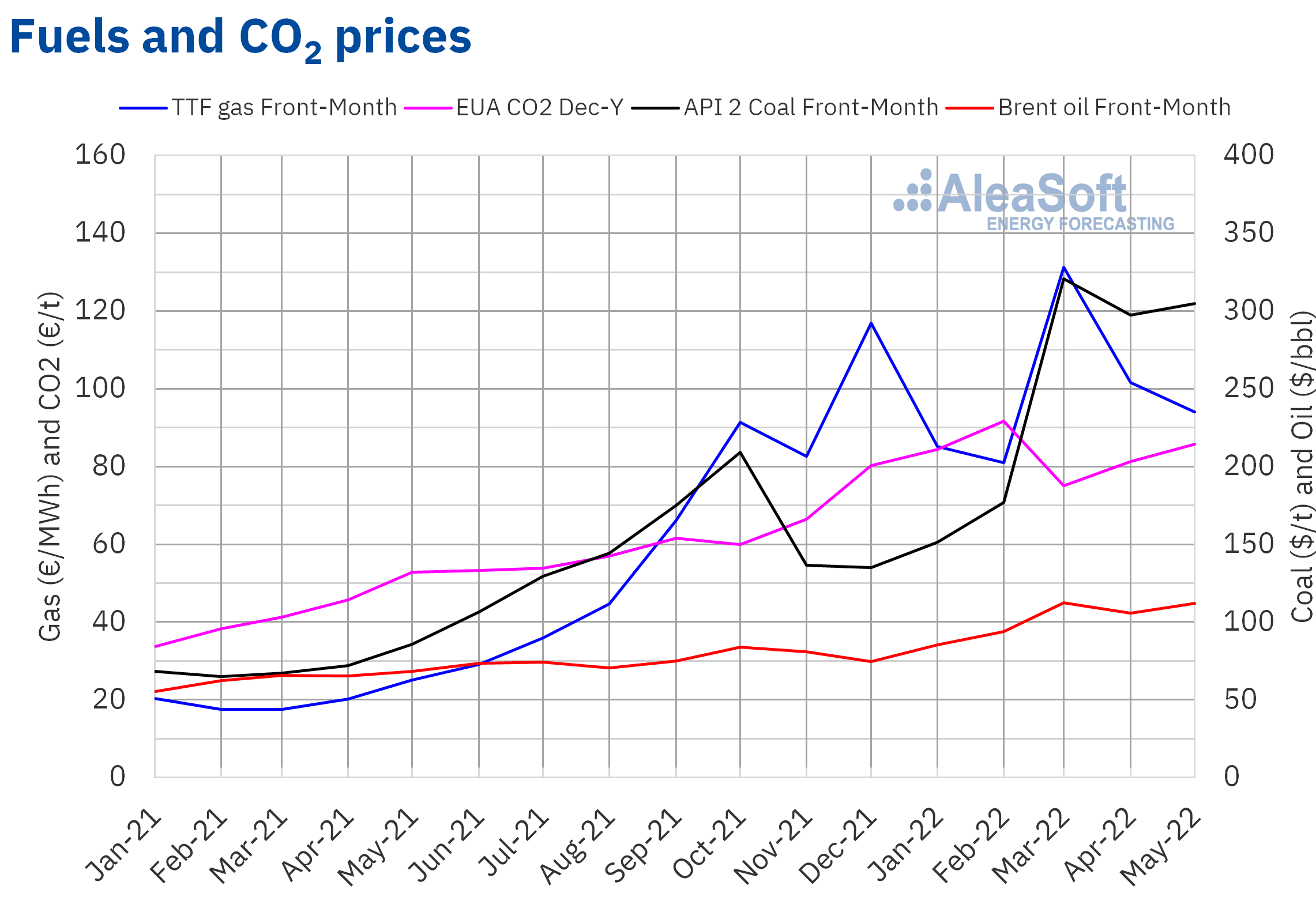 On Thursday, June 9, a new edition of the AleaSoft Energy Forecasting’s monthly webinars will be held, with the participation of guest speakers from Engie Spain. The topics that will be addressed in the webinar are: the evolution and prospects of the European energy markets, the renewable energy projects financing and PPA, and the novelties in the regulation of the Spanish electricity sector.

One of the regulatory novelties of the Spanish electricity sector that will be analysed in the webinar is the Royal Decree‑law 10/2022, which establishes a mechanism for adjusting production costs to reduce the electricity price in the MIBEL wholesale market on a temporary basis. AleaGreen’s long‑term price curves forecasts already take into account the effect of this mechanism. These forecasts, which have 30 years and hourly granularity, are necessary for PPA, renewable energy assets valuation, cogeneration and for the development of batteries.