AleaSoft, January 8, 2020. The need to decarbonise the European economy, in addition to being fundamental from the environmental point of view, is necessary to stop having dependence on fossil fuel imports. If in 2050 Europe reduces the CO2 emissions to almost zero, it will have also reduced the economic and geopolitical cost of oil and gas imports.

The renewable energies are of great importance, that is indisputable, as well as being the future for a clean and sustainable planet. The photovoltaic and wind energy production is unlimited and does not generate any kind of pollution. In addition, they have another advantage that is rarely spoken of: they are generated “in situ”, that is, they do not need to be transported to the place where electric energy is produced as it does in the case of coal, gas and petroleum derivatives. The renewable electricity production only depends on weather conditions, in this case sun and wind. This clean production does not depend on other external factors.

When a conventional power generation plant uses coal, gas or some kind of petroleum derivative as fuel, it emits CO2 produced by the combustion and other polluting gases into the atmosphere. To take the fuel to the plant, perhaps thousands of kilometres were travelled in different means of transport, which also were consuming fossil fuels and generating pollution. That is, there is a non-accounted extra cost in pollution and an additional cost in transportation, which in the case of the photovoltaic and wind energy production is zero.

But there is another additional cost in transportation even higher: the geopolitical cost. The routes that the fuel travels to reach its destination, in addition to being long, have an additional danger: they can be interrupted by unplanned and uncontrollable events. The oil or gas pipelines can be cut off interrupting the flow of fuel and the ships carrying oil, gas or coal can be blocked or even sunk in some conflict circumstances.

The oil and gas tap can be cut to pressure an adversary or an enemy. It can also be closed to increase the price of fuel.

In Europe, the gas conflict between Ukraine and Russia is an example. The gas that flows to Central Europe from Russia crossing Ukraine was cut at some times when the demand was high with the devastating consequences it implies for consumers. In the past, Ukraine cut off the flow of gas that passes through its territory to pressure Russia and it cut off the flow of gas to pressure Ukraine, which also consumes it.

The largest oil and gas producers worldwide are in conflict zones such as North Africa or the Middle East. In 1973, Arab producing countries in these regions cut off oil supplies to the countries that had supported Israel in the Yom Kippur war, leading to the first oil crisis. The price of crude oil and other petroleum products grew enormously to figures that had not been imagined before.

The experience of the first oil crisis brought several lessons. The oil producing countries, when they act in coordination, can pressure and control the prices. Another general lesson was a first step to become aware of the rational use and the saving in the fuels consumption. This exceptional circumstance also gave way to studies of alternative energy sources giving rise to the seed of the current development in renewable energy generation.

As an example of current events we have the case of the escalation in the conflict between the US and Iran that is causing a rise in oil price. The intraday price of the Brent oil futures for the month of March in the ICE market arrived today Wednesday 8 to exceed $71/bbl at some point. On October 3, the Brent barrel price of this future market was $56.24/bbl. Everything seems to indicate that this Brent price increase will continue, with the possibility of exceeding $80/bbl if the escalation is maintained. If there is war and the Strait of Hormuz is closed, where more than 20% of the oil traded worldwide is transited, the Brent price could exceed $100/bbl reaching values not seen since 2015.

Stop having dependence on coal, gas and petroleum products has multiple environmental advantages, but they are also the basis for having energy independence by minimising the importation of fossil fuels. Imports that at the moment in Europe are of the order of 5 billion Euros a week would be saved and the uncertainty that could exist externally could be reduced to zero, such as the variation in the prices of international fuel markets and the possible cuts in the transport or generation of gas or oil. 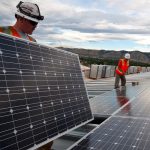 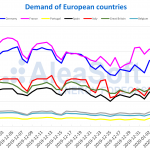