The average solar energy production of Europe’s markets decreased in most markets between Monday and Wednesday of this week compared to last week, with the exception of the Iberian Peninsula. In Portugal, the average of solar energy production grew steadily for two weeks and in this one it was 21% above the previous one. With similar growth, the generation with this technology in Spain during the first three days of the week exceeded by 21% that of the week of December 30. Meanwhile, in Germany and Italy the declines were of 38% and 6.5%, respectively.

Comparing the first days of this year with respect to the same period of 2019, the solar energy production increased in all countries. So far this month the increases of 81%, 16% and 11% of Germany, Italy and the Iberian Peninsula stand out. 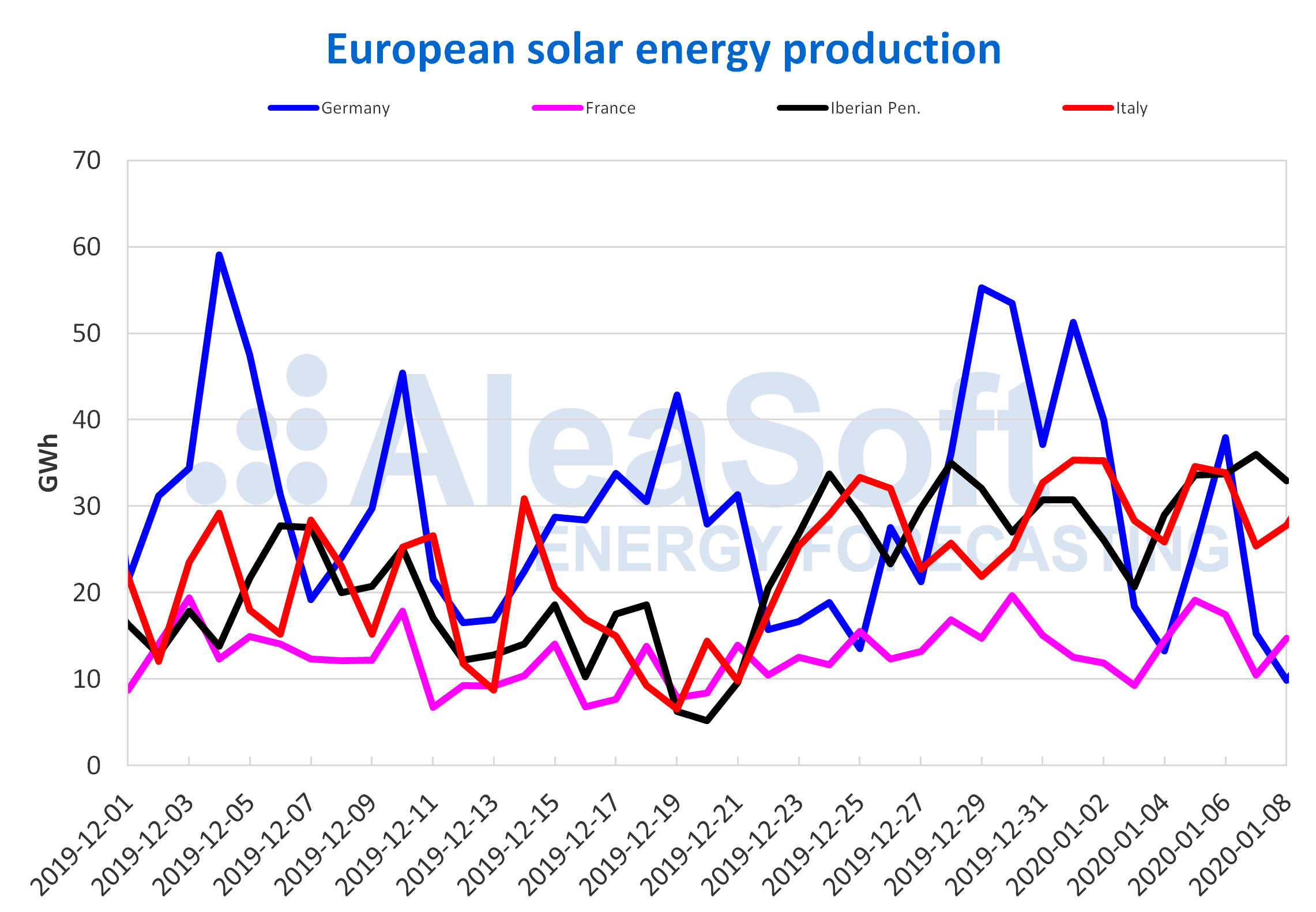 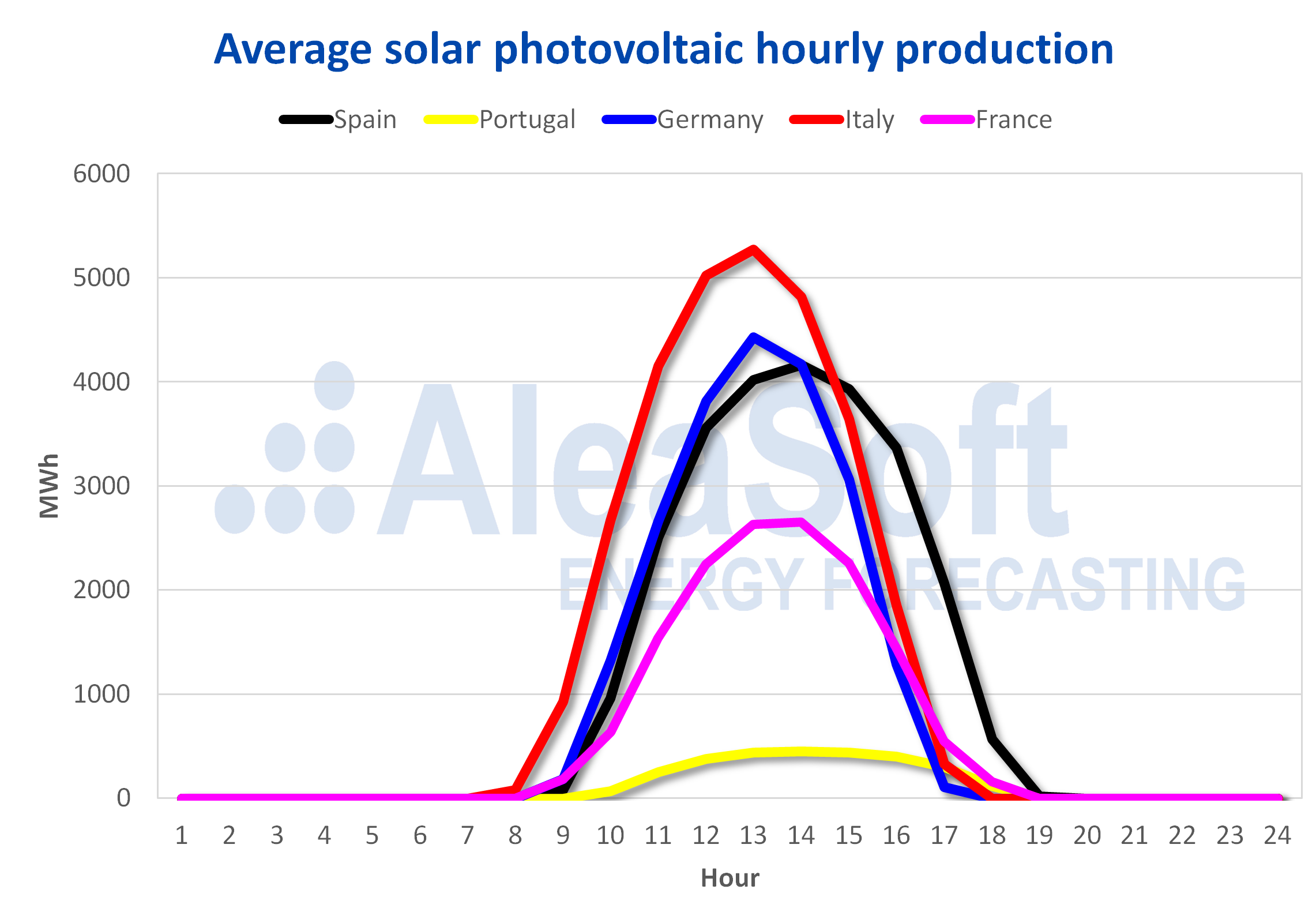 As for the average level of the wind energy production, most European markets suffered declines between January 6 and 8 compared to the first week of the year. One of the markets where it recovered was the French, where it increased by 36%. The average production of the Italian market remained in the range from 74 GWh to 77 GWh as in the last two weeks, increasing by 2.4% during the elapsed days this week. In Spain and Portugal, the generation receded in this period, as it was happening for three weeks, decreasing by 45% and 17% respectively.

The year‑on‑year behaviour of the wind energy production during the first eight days of the month was down in all markets, except in France where it increased by 19%. In Portugal there was a decrease of 63% and in Spain of 51%, while in Germany and Italy the drops were of 15% in both cases. 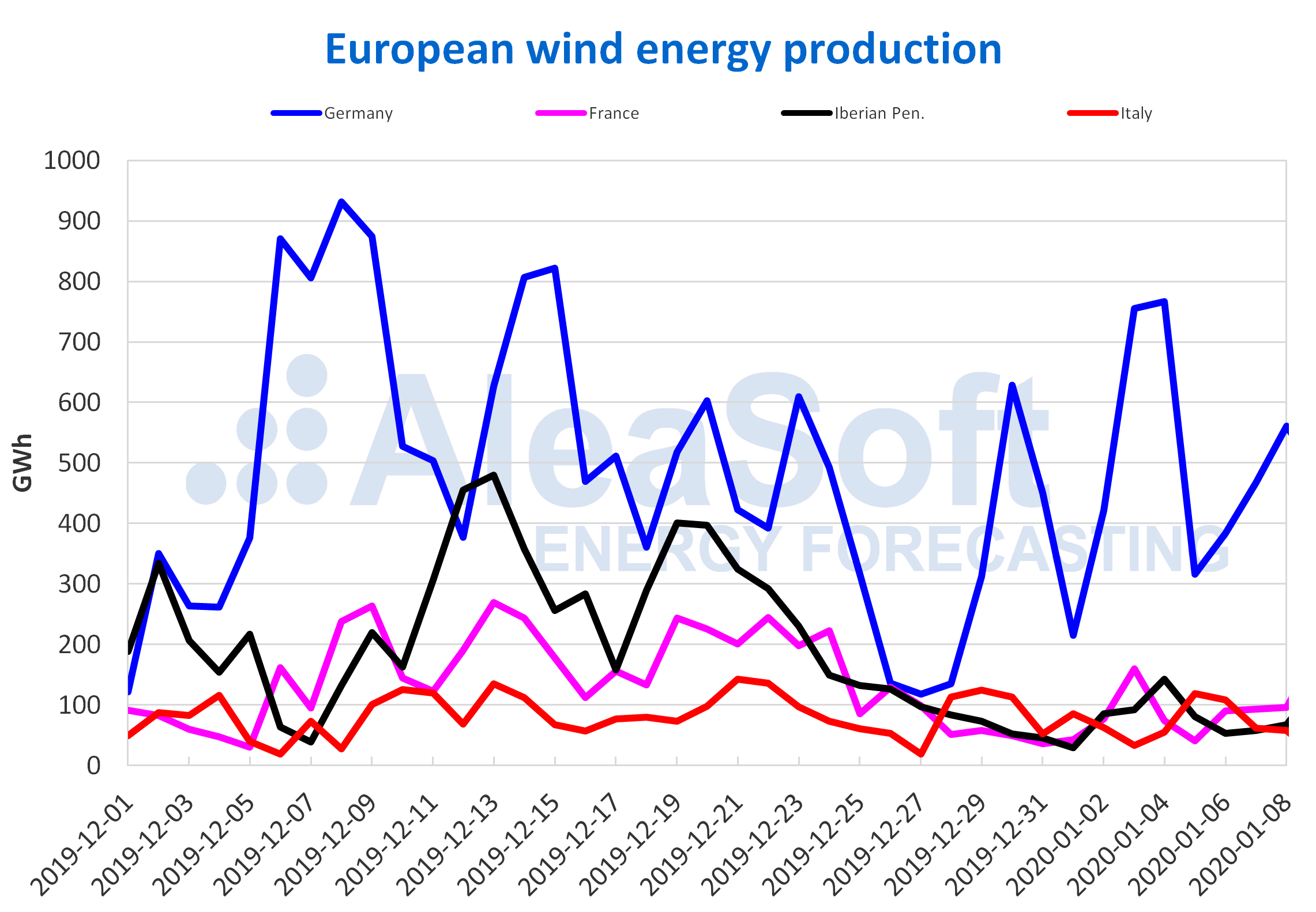 The electricity demand increased in all European markets from January 6 to 8 compared to that of the same days of the previous week. In most of them the increase was above 15%. The largest increases occurred in Germany and Italy, with 27% and 25% respectively. During this week, a higher electricity demand than last week is expected after the end of the Christmas period. 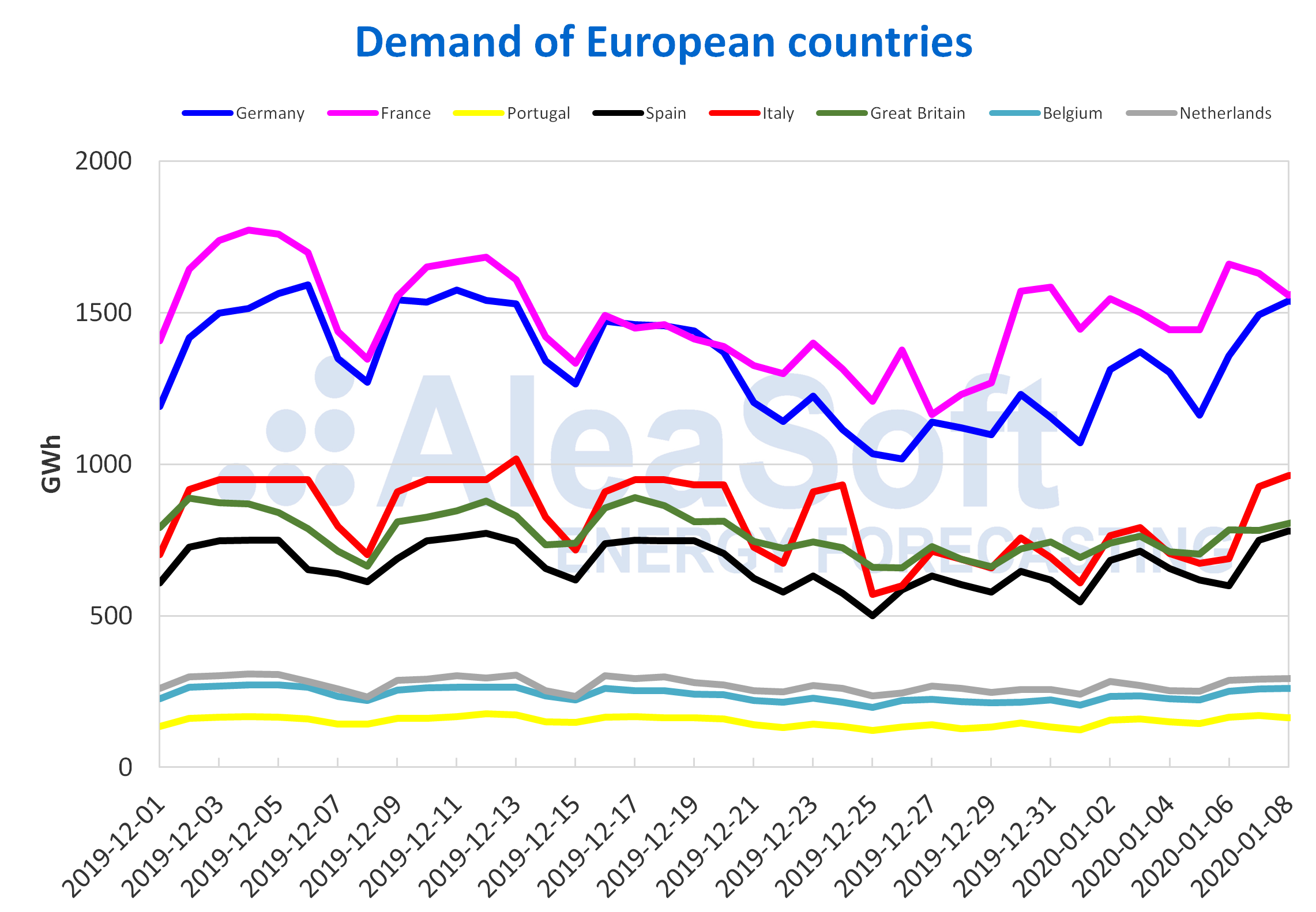 The electricity demand increased 18% from Monday to Wednesday of this week compared to the same period last week. If the effect of the holidays of January 1 and 6 is corrected, the increase was of 1.2%. For next week the demand is expected to be higher than this week.

Currently all nuclear power plants are underway. From Monday to Wednesday of this week, the level of the nuclear energy production was the same as last week, with a stable value of 170 GWh per day. 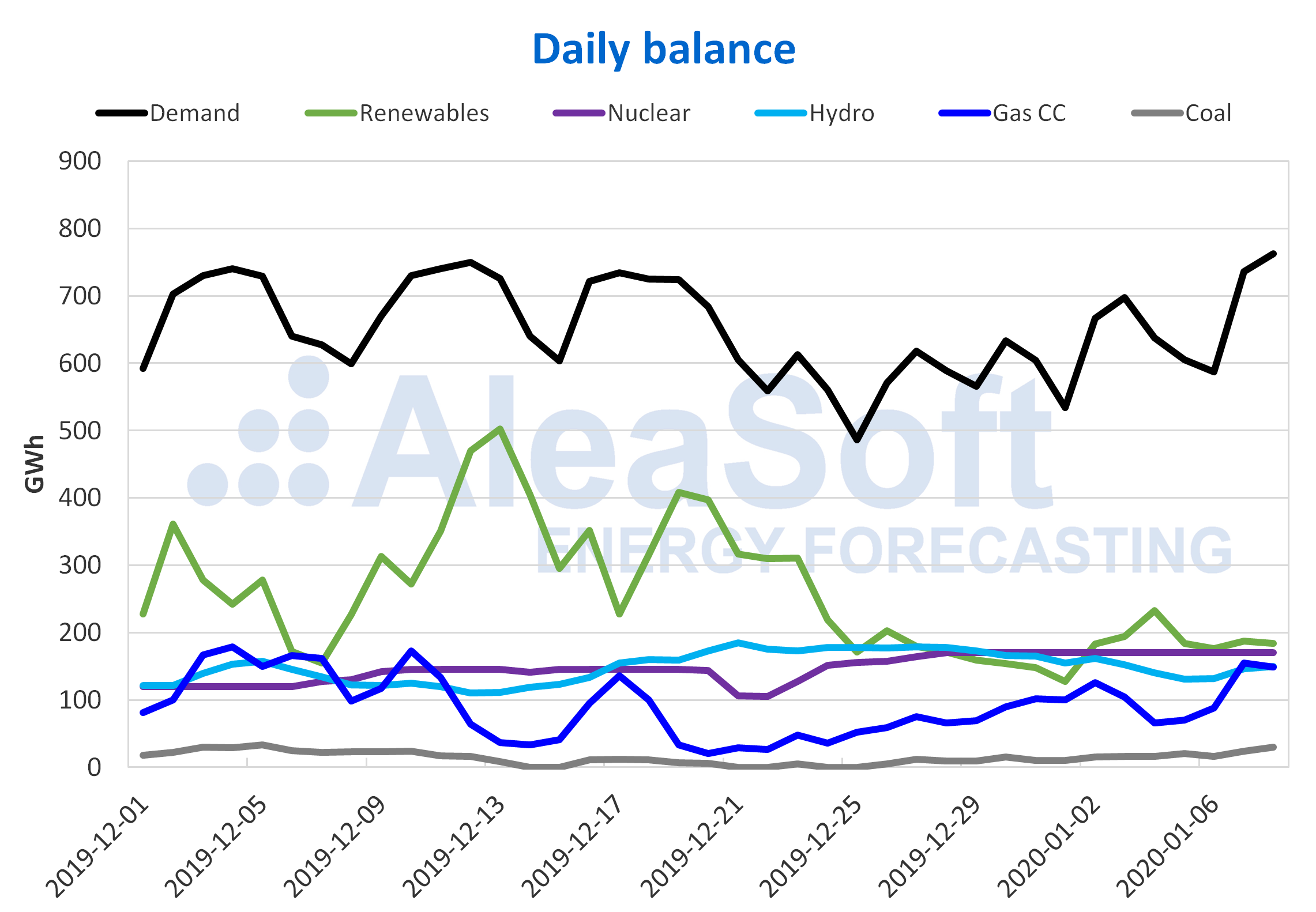 The hydroelectric reserves fell by 0.3% in the last week and the current level is 12 278 GWh, equivalent to 53% of the total capacity, according to data from the latest Hydrological Bulletin of the Ministry for Ecological Transition.

So far this week, the European electricity markets prices behaved upward in most markets compared to the same days of the previous week. The price of the IPEX market of Italy, the MIBEL market of Portugal and Spain and the EPEX SPOT market of Germany, France, the Netherlands and Belgium showed increases in the average price for these days between 20% and 1.9%. The Italian market was the one with the highest price during the first four days of the week, with an average of €48.97/MWh, followed by the Iberian market that averaged €44.15/MWh. The rest of these markets were between €37.12/MWh of the German market and €39.47/MWh of the French market. On the other hand, the prices of the Nord Pool market of the Nordic countries and the N2EX market of Great Britain decreased by 8.8% and 1.6% respectively. The Nord Pool market was the one with the lowest average price, of €27.57/MWh, while the British market, with an average of €41.95/MWh, ranked as the third market with the highest price in the continent.

Although the wind energy production was higher in general, the general increase in electricity demand after the end of the Christmas holiday period and the beginning of the year, led to the increase in prices in most markets with respect to them days of last week. 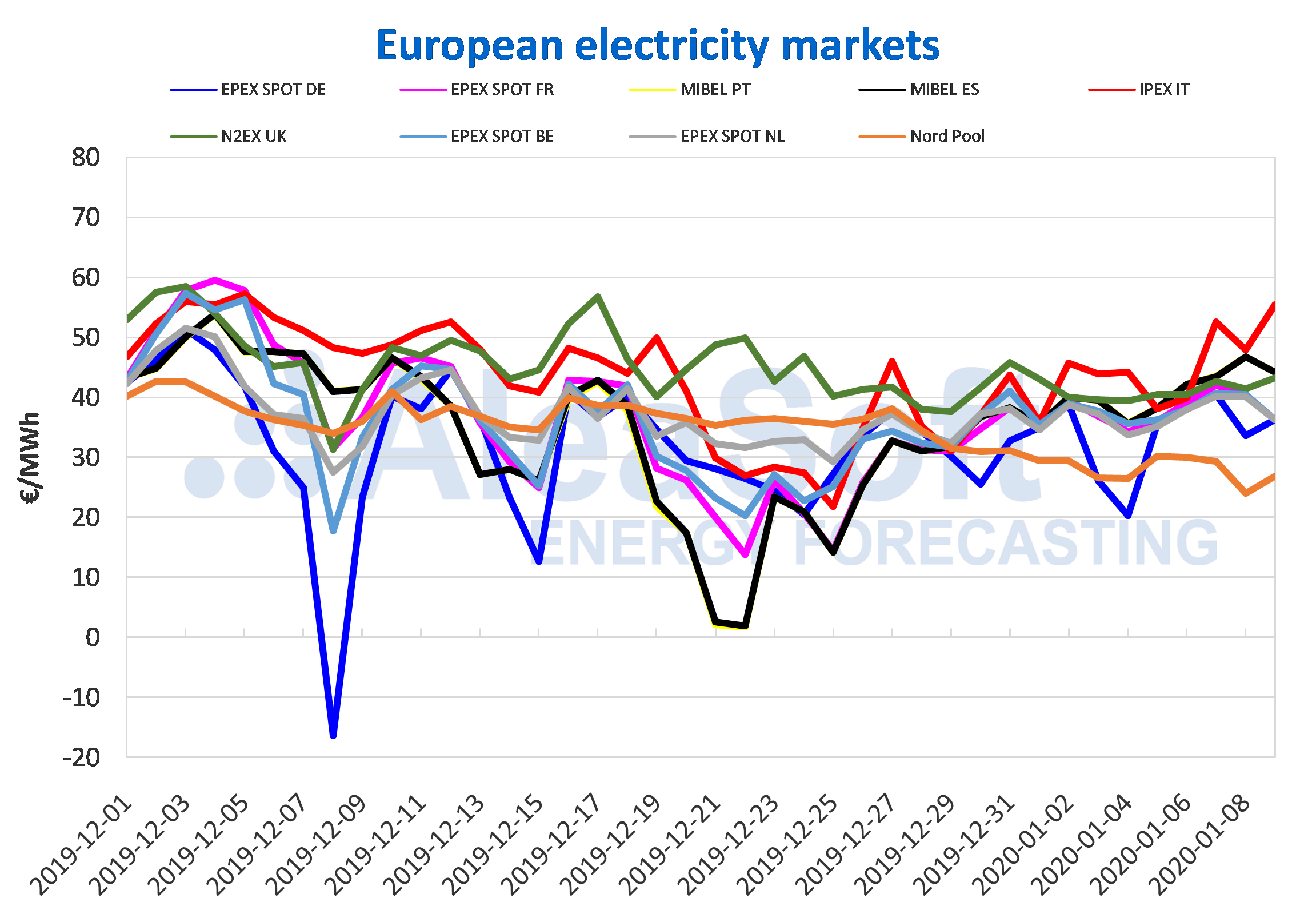 At AleaSoft it is expected that in the rest of the days of this week the prices will decrease slightly in most European markets compared to those of the beginning of this week as renewable energy production is expected to increase during the weekend when the electricity demand is lower.

In the MIBEL market of Spain and Portugal, the average price so far this week was €44.15/MWh. With an increase of 17% compared to the same days last week, it was the second in the list of markets with the highest prices during the first four days of this week. The increase in electricity demand and the decrease in temperatures for the days elapsed this week caused the price increase, although the wind and solar energy production was higher.

At AleaSoft, the prices are expected to fall during the rest of the week, backed by an increase in production with renewable energies in the Iberian Peninsula.

In the electricity futures for the second quarter of 2020, so far this year there were declines in all the markets analysed at AleaSoft. The ICE market of the Nordic countries was the one with the lowest price for this product, after settling in the session of yesterday, January 8, at €24.98/MWh. In addition, together with the NASDAQ market of the Nordic countries, they registered the greatest decreases, of 9.1%. On the other hand, the EEX market of Italy presented the highest price, of €45.58/MWh and was also the one with the lowest decrease these days, with a ‑0.6% difference compared to Friday, January 3.

As for electricity futures for 2021, the behaviour was similar: generalised decline, but in this case of lesser magnitude. The EEX market of Italy and the NASDAQ market of the Nordic countries were the markets with the highest and lowest prices respectively, with €54.79/MWh and €32.40/MWh. In this case, the market with the greatest variation was the ICE market of Great Britain, which registered a decrease of 2.7%. Meanwhile, the EEX market of Italy and the ICE market of the Netherlands registered the smallest variations, with 0.1% declines in both cases.

The Brent oil futures prices for the month of March 2020 in the ICE market began this week with increases, continuing with the same trend of the beginning of 2020. On Monday, January 6, the settlement price was $68.91/bbl. No such high prices were registered since the end of April 2019, when it reached $70.32/bbl on April 23. But on Tuesday, January 7, the price began to fall. On Wednesday, January 8, the declines continued and the settlement price was $65.44/bbl, the lowest price so far this year.

The registered increases are related to the increase in hostilities between the United States and Iran. However, the fact that the United States decided to limit reprisals against Iran to economic sanctions allowed the price of oil to fall again as fears about the closure of the Strait of Hormuz dissipated. In addition, in the case that the Strait of Hormuz was closed due to a resurgence of tensions in the area, the OPEC seems willing to dispense with the production cuts agreed in December to ensure the supply and prevent the prices from uncontrollably rising. On the other hand, the reduction of the perspectives on the global economic growth for 2020 by the World Bank also exerts its influence on the evolution of the prices.

Earlier this week, prices of TTF gas in the spot market continued with the upward trend of last week. But for Wednesday, January 8, this trend changed and the prices began to decline. The index price for this Thursday, January 9, was €11.60/MWh.

The API 2 coal futures prices in the ICE market for the month of February 2020 remained fairly stable since the beginning of this year, varying between $53.75/t of last Monday and $54.20/t of the previous Friday. Yesterday, January 8, the settlement price was $53.80/t, the same as that of January 2.

The CO2 emission rights futures in the EEX market for the reference contract of December 2020 on Monday, January 6, reached a settlement price of €24.24/t, 3.0% lower than that of the previous Friday. On Tuesday the price increased 1.3% compared to the previous day. But on Wednesday, January 8, it fell again by 2.0% compared to Tuesday and the settlement price was €24.08/t. 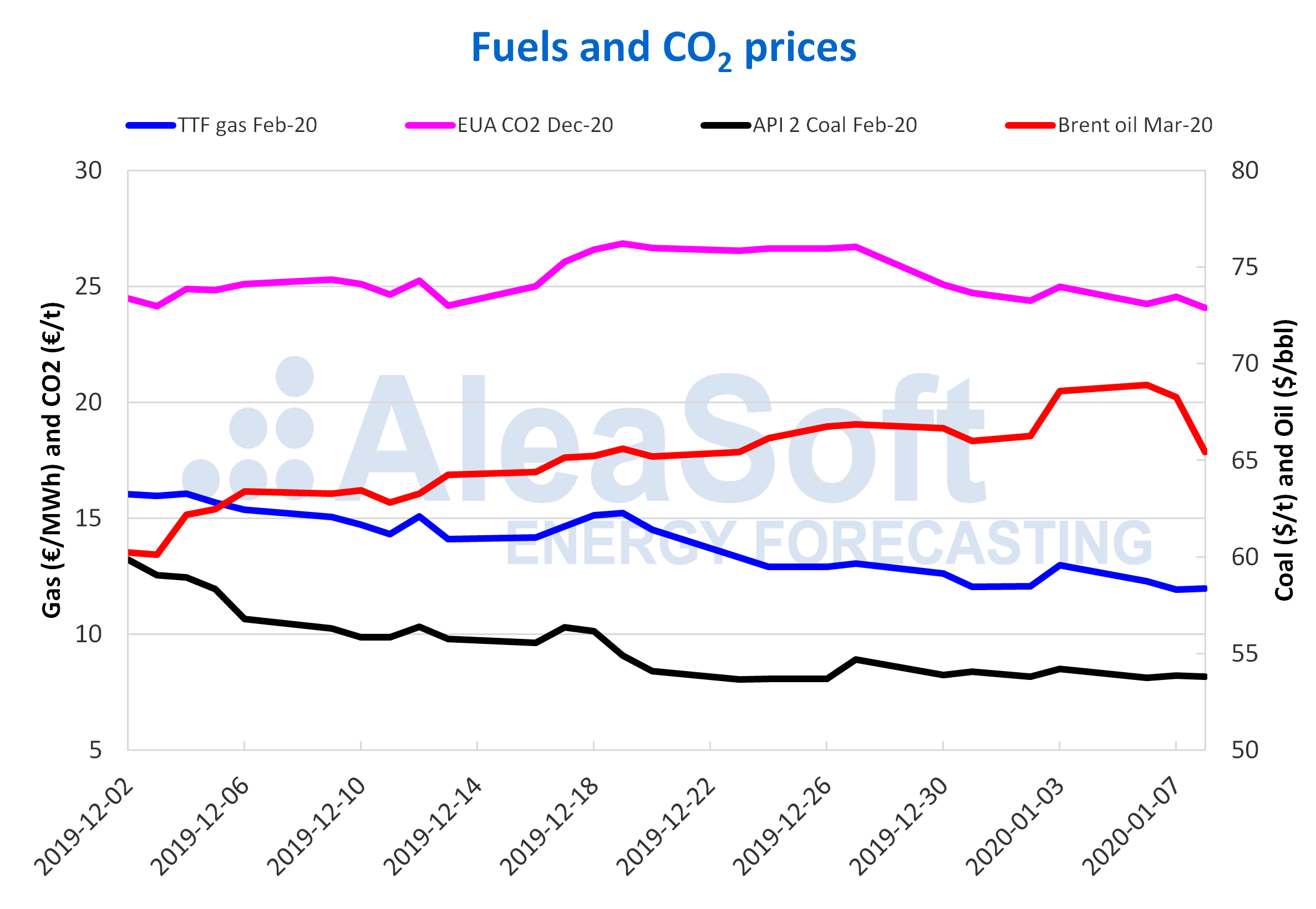