AleaSoft, February 19, 2020. Coinciding with the 20th anniversary of its foundation, AleaSoft published several articles on the history of the Spanish electricity market. This market together with the Portuguese forms the MIBEL electricity market. On this occasion, the AleaSoft’s analysis focuses on the Portuguese market, providing information about its history, comparisons with respect to the Spanish market as well as the perspectives with which this country faces the renewable energy revolution.

The Portuguese electricity market was liberalised with the entry into force of the Iberian Electricity Market (MIBEL) on July 1, 2007. From that date on the MIBEL market the electricity of the entire Iberian Peninsula is traded. Roughly, all the offers from Spain and Portugal are taken into account to determine the price of each hour. If the interconnection between the two countries is not saturated, the price of that hour for Spain and Portugal will be the same, that is, the market coupling takes place. On the other hand, if the interconnection becomes saturated, the market separation (market splitting) takes place and the price of both countries will be different.

The coupling between Spain and Portugal, that is, the percentage of hours of the year in which they had the same price, increased over the years. In 2008 it reached only 38% of the hours but it increased rapidly and in 2010 it was already 87%. As of 2014, the electricity prices of Spain and Portugal have coincided every year in a percentage greater than 90% of the hours. Since MIBEL began until today, the year in which a greater coupling between the two markets was achieved was 2015 with 98% of the hours. 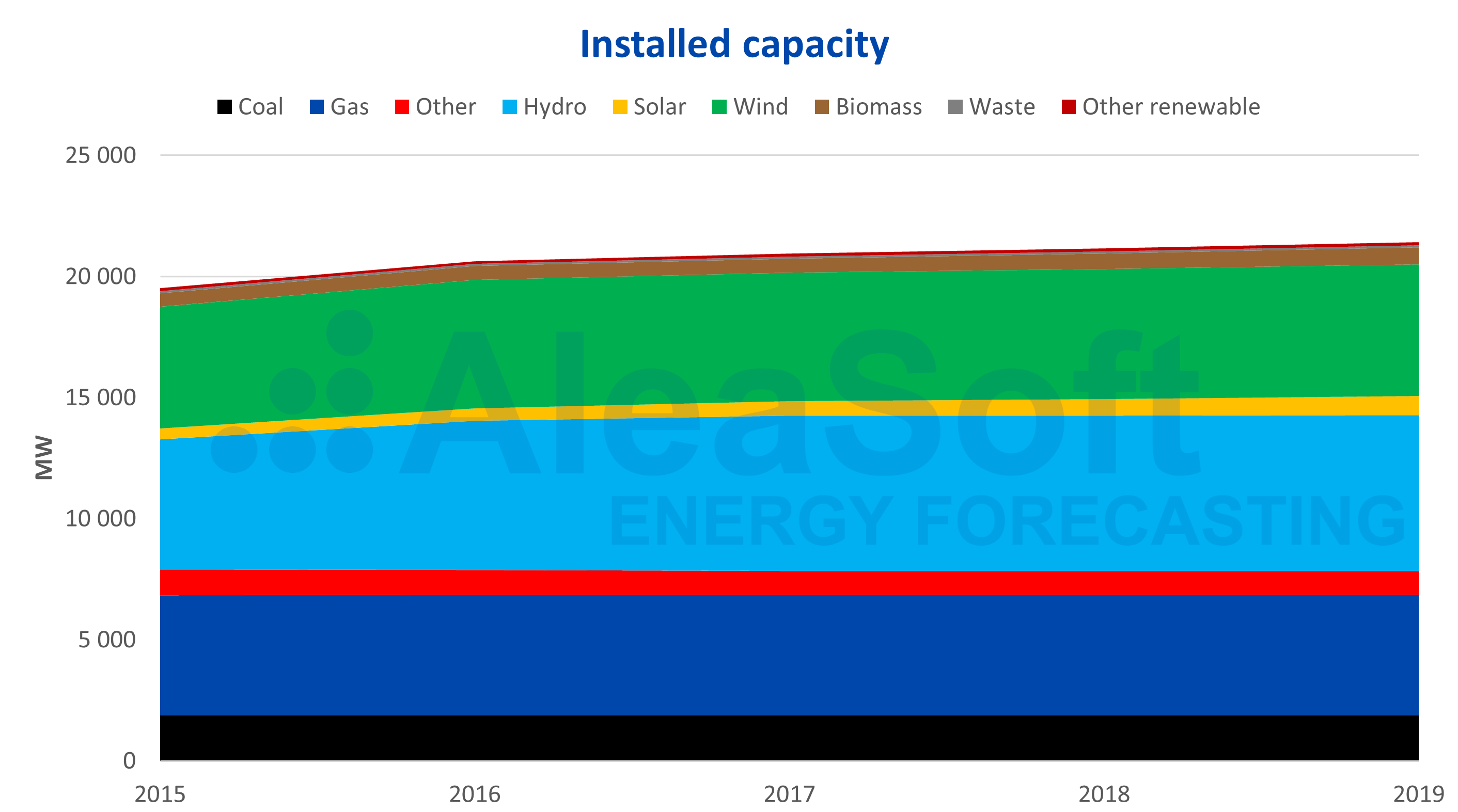 The year with the greatest electricity demand in Portugal was 2010, when the demand reached 52.2 TWh after falling slightly in 2009 at the beginning of the global economic crisis. In 2014 the demand hit bottom with 48.8 TWh, a 6.5% drop since 2010. Since then, the demand was slowly recovering up to 50.8 TWh registered in 2018, exceeding the demand of 2008 before the crisis, but that is still well below the 2010 values.

Comparing the electricity demand to that of Spain, it can be said that Portugal led the crisis a little better. In Spain, the demand also hit bottom in 2014, but here the fall from the maximum in 2008 was 8.3%. 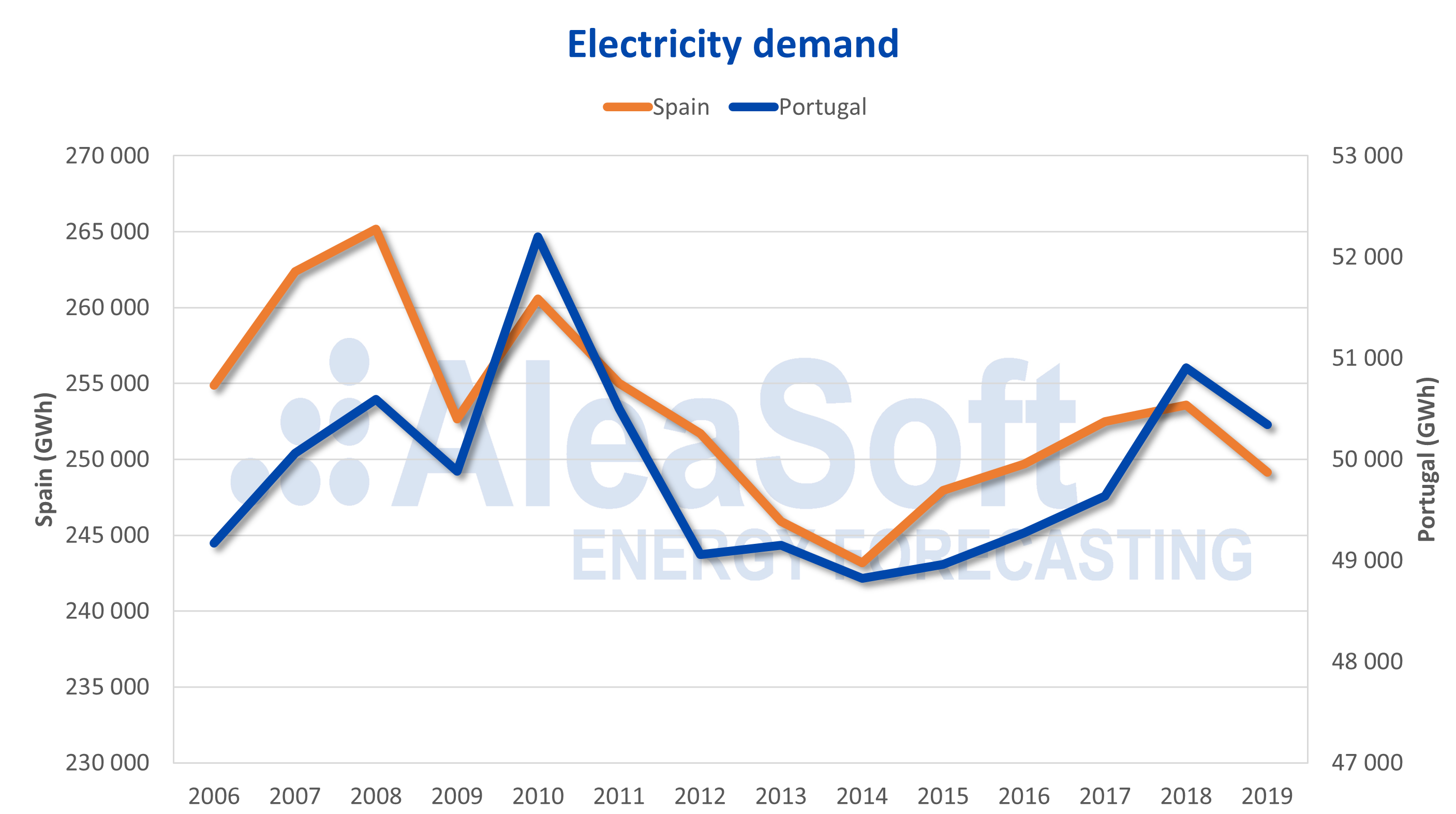 Source: Prepared by AleaSoft using data from REE and REN.

In Portugal, the renewable energies represent two thirds of all the installed generation capacity in the country. The first technology is the hydroelectric, which accounts for 37% of the total capacity, followed by the wind energy with 26%. The solar photovoltaic energy has a somewhat more testimonial role with a 1.6% share.

Portugal’s starting point, in the face of the renewable energy revolution that is anticipated to pursue the targets of CO2 emissions reduction, is somewhat more advanced than in the case of Spain, where the renewable energies account for only 55% of the total capacity. Even considering that Spain has 7 GW of nuclear capacity without CO2 emissions, the fraction of the generation park without emissions only reaches 62%. It must also be taken into account that there are already plans for the closure of all Spanish nuclear capacity, so those 7 GW cannot be counted for the 2030 environmental objectives. For that year, if the plans are fulfilled, only 4 GW of nuclear capacity should remain operating.

Sources: Prepared by AleaSoft using data from REN and DGEG.

Future of the electricity generation in Portugal

According to the National Energy and Climate Plan (NECP) of Portugal, this country aims to increase the weight of the renewable energies progressively so that, by 2030, 80% of the electricity comes from renewable energy sources. For this year, it is estimated that the installed capacity in Portugal will be between 30.5 GW and 32.0 GW. Out of these, between 8.2 GW and 8.7 GW are expected to be of hydroelectric energy, about 9.3 GW of wind energy and about 9.0 GW of solar photovoltaic energy.

In order to achieve these objectives, the Portuguese government intends to increase the country’s solar energy production capacity by 2.0 GW in the next two years. An incentive to achieve this goal is the renewable energy auctions, which were widely talked about worldwide because of the lowest prices records of the photovoltaic energy achieved in the last auction. In contrast, Spain has not organised any auction since 2017, although the government’s intention is to start again with auctions on a more or less regular basis in order to achieve the objectives of the Spanish NECP.

The challenge for Portugal is great, being a relatively small country where surface requirements for wind and photovoltaic parks can complicate the installed capacity objectives of these technologies.