AleaSoft, February 17, 2020. The German market had its first day of 2020 with a negative daily price yesterday, February 16, thanks to the increase in temperatures, the lower demand and the high wind energy production. Spain broke its historical record of instant photovoltaic energy production twice last week and the Germany’s daily wind energy production also set a record. This week prices are expected to rise and, in some cases, close to those of the week of February 3.

In the week just finished, the solar energy production fell in most European markets compared to the week of February 3. However, some markets saw their highest daily records so far in 2020. In the case of Spain, this week the record for maximum instantaneous photovoltaic energy production was broken again, which rose this time to 5264 MW at 1:40 p.m. of February 15. Another historical record of last week was the daily production of the photovoltaic and solar thermal energy in Spain, of 48 GWh on February 16, the largest since this year began. All analysed European markets exceeded the maximum daily solar energy generation levels of 2020, with the German being the most significant with 96 GWh.

As for the variations compared to the previous week, there were decreases of 19% and 3.2% in the solar energy production of the markets of Germany and France respectively. For the fourth consecutive week, the solar energy generation increased in Spain, reaching an increase of 7.4%. Similarly, the production of the Italian market rose for the fifth consecutive week and registered an increase of 4.3%.

According to the year‑on‑year analysis from February 1 to 16, the increases were slightly lower than in previous weeks. The rise in Germany was only of 0.2%, in Spain of 14% and in Italy of 8.2%. 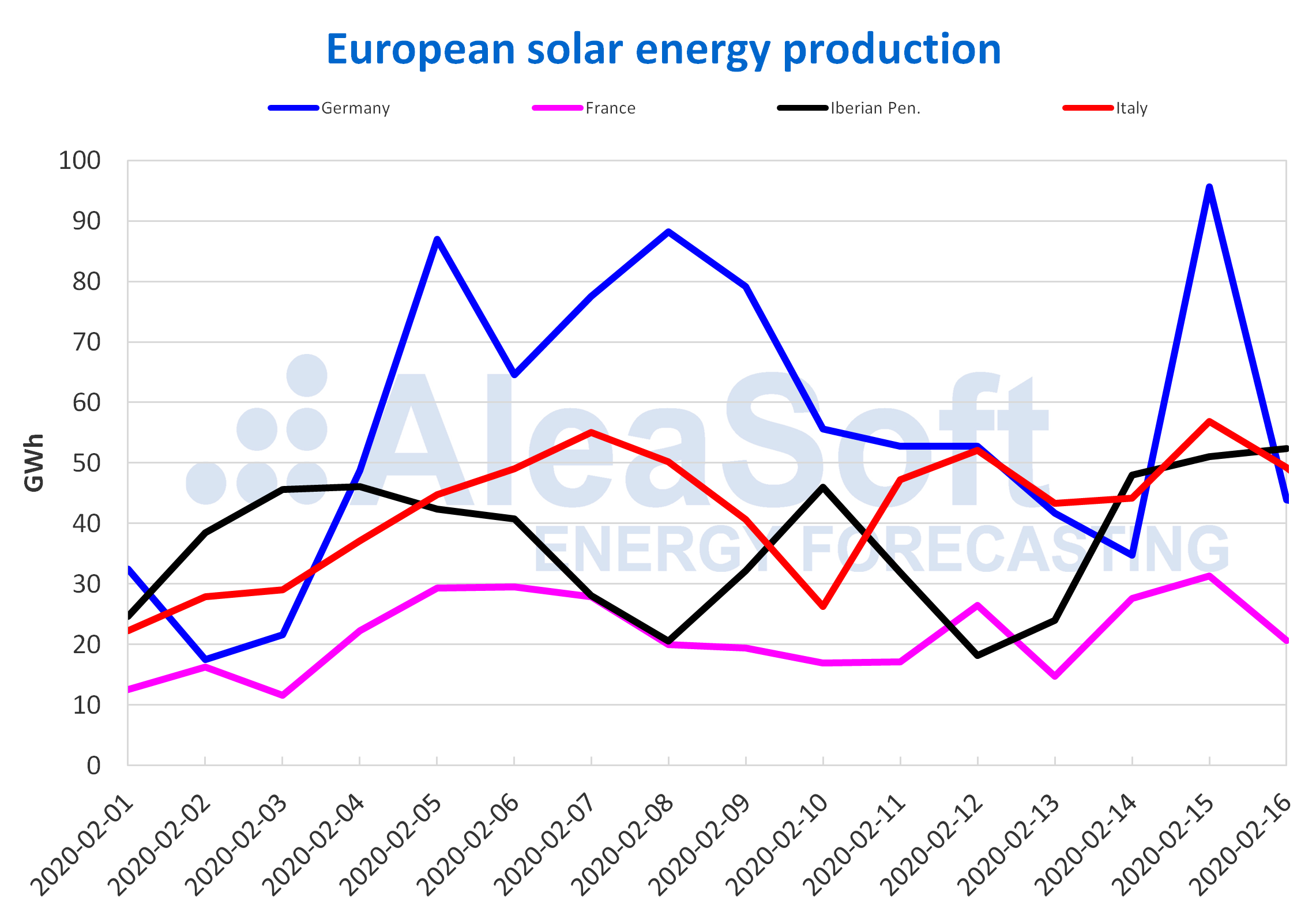 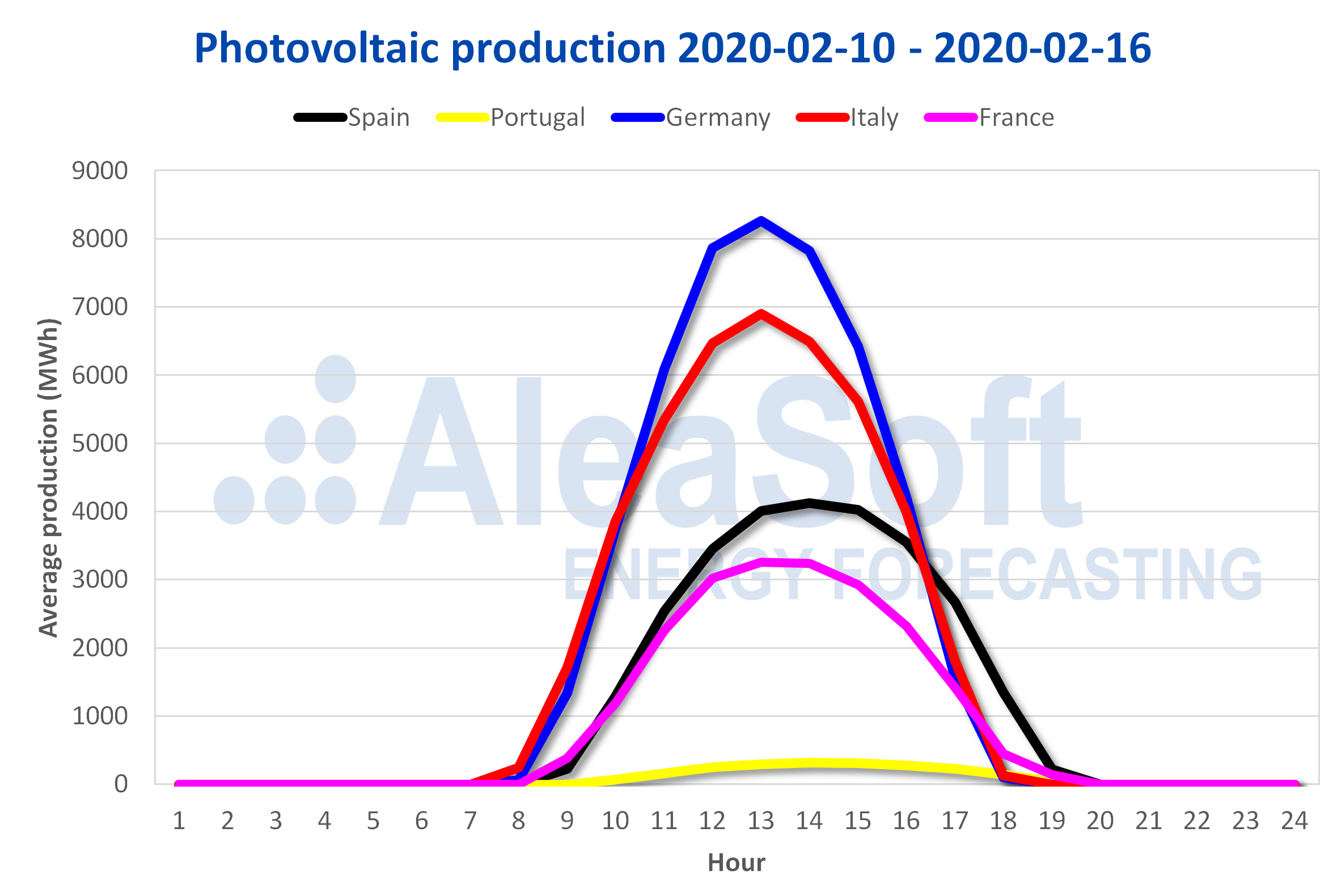 On the other hand, the wind energy production behaved in a heterogeneous manner in the European markets during the past week. The 1033 GWh produced on February 11 in Germany broke the historical daily production record. It was mainly for this reason that the production increased by 54% in this market compared to the week of February 3. In the French market the rise was 51%, while in Spain and Italy the falls were 1.7% and 6.8%, respectively.

From 1 to 16 of this month, the generation from this renewable source increased in Germany by 41% and in France by 72%, in year‑on‑year terms. On the other hand, the rest of the markets continue with a lower level in the year‑on‑year comparison. The decreases were 11% and 12%, in Spain and Italy, respectively.

At AleaSoft, it is expected that during this week the wind energy production will increase with respect to the previous week in Germany and Portugal and that it will fall in the rest of the electricity markets of the continent. 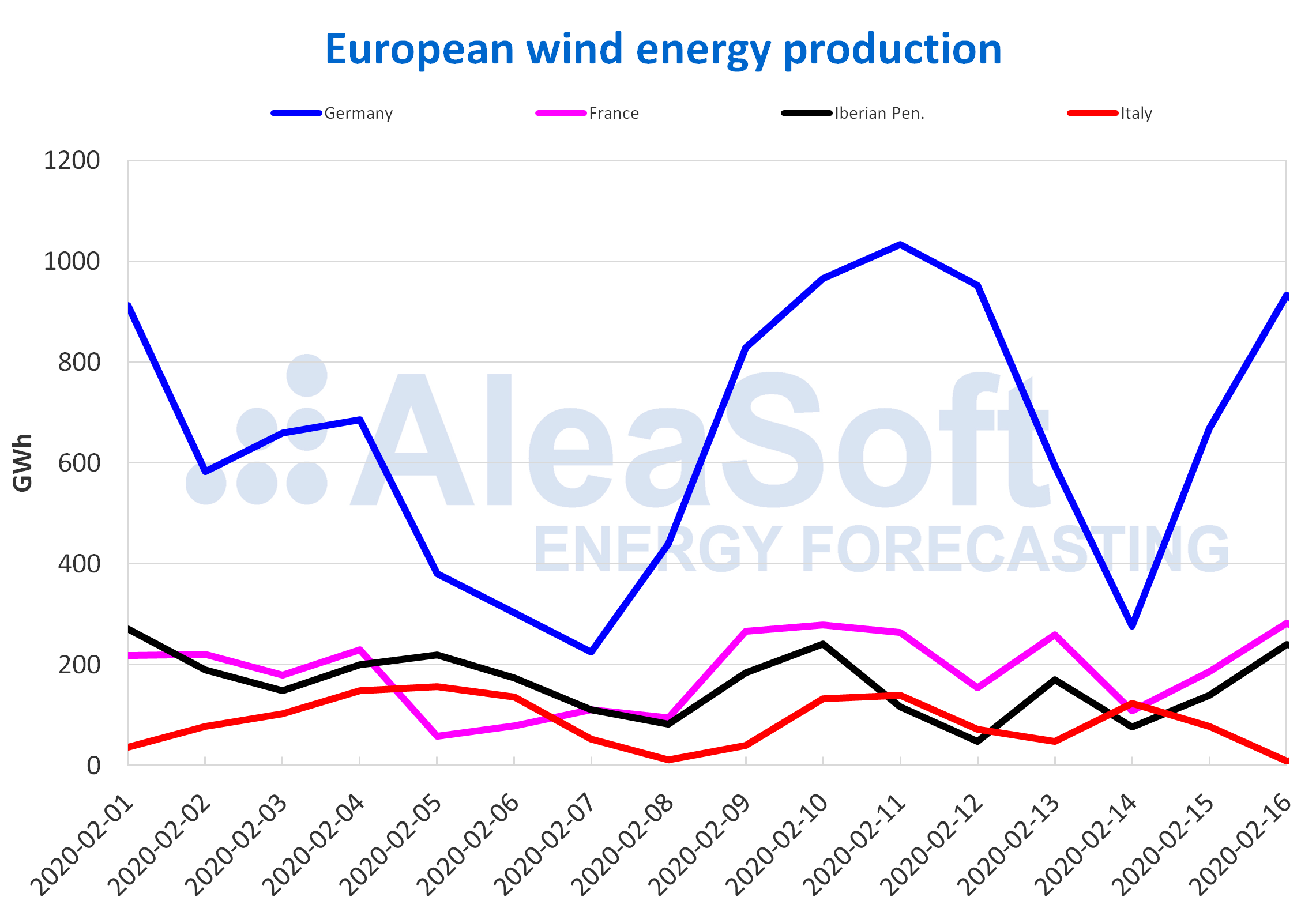 The temperatures were less cold on average last week compared to the previous one. This caused a decrease in electricity demand in several of the European markets. The markets of Belgium and France were the ones with the greatest variation, ‑3.4% and ‑2.2% respectively. The declines in Spain, Italy, and Great Britain were 0.4%, 1.1%, and 0.3%, respectively. In contrast, an increase of 1.6% was registered in Germany.

For this week AleaSoft forecasts indicate that there will be colder temperatures than last week, which will lead to increases in demand in several markets of the continent.

During the last week of February 10 the prices of all the European markets analysed at AleaSoft were, on average, lower than in the previous week of February 3. The EPEX SPOT market of Germany stands out, whose weekly average price was reduced by 36%, about €10/MWh lower than the previous week. The MIBEL market of Portugal is the one with the least pronounced decline, with a difference of ‑1.4% between the average prices of the two analysed weeks.

This drop in prices is mainly due to the large renewable energy production of last week of February 10. Both wind and photovoltaic energy production had very high values during the past week. Other factors to consider in the lowering prices are the decrease in demand in several markets and the low gas prices.

The price of the EPEX SPOT market of Germany on February 16 was the more remarkable of the week. The high wind energy production values were combined with higher temperatures and the lower demand of a Sunday to reach the first day of 2020 with a negative daily average price. Specifically, the average price of the day was ‑€8.27/MWh. A negative price was achieved at almost all hours of the day, 23 of the 24 hours had a negative price, the penultimate hour of the day ended up matching at €0.74/MWh. No negative daily prices were seen in this market since December 8, 2019.

The IPEX market of Italy, the MIBEL market of Spain and Portugal and the N2EX market of Great Britain continue to form the group of markets with the highest price. These markets had settlement prices for this Monday, February 17, in all cases above €30/MWh and specifically the Italian €40.65/MWh. On the other hand, the prices of the EPEX SPOT markets of Germany, France, Belgium and the Netherlands continue, as usual, in the group of markets with lower prices. In this case, the prices for February 17 are between €18.25/MWh of the German market and €25.08/MWh of the Netherlands market. And finally we have the Nord Pool market of the Nordic countries, which since the beginning of the year was unmarked from the rest, with a price that throughout the week did not reach €16/MWh and that for this February 17 was €10.23/MWh. 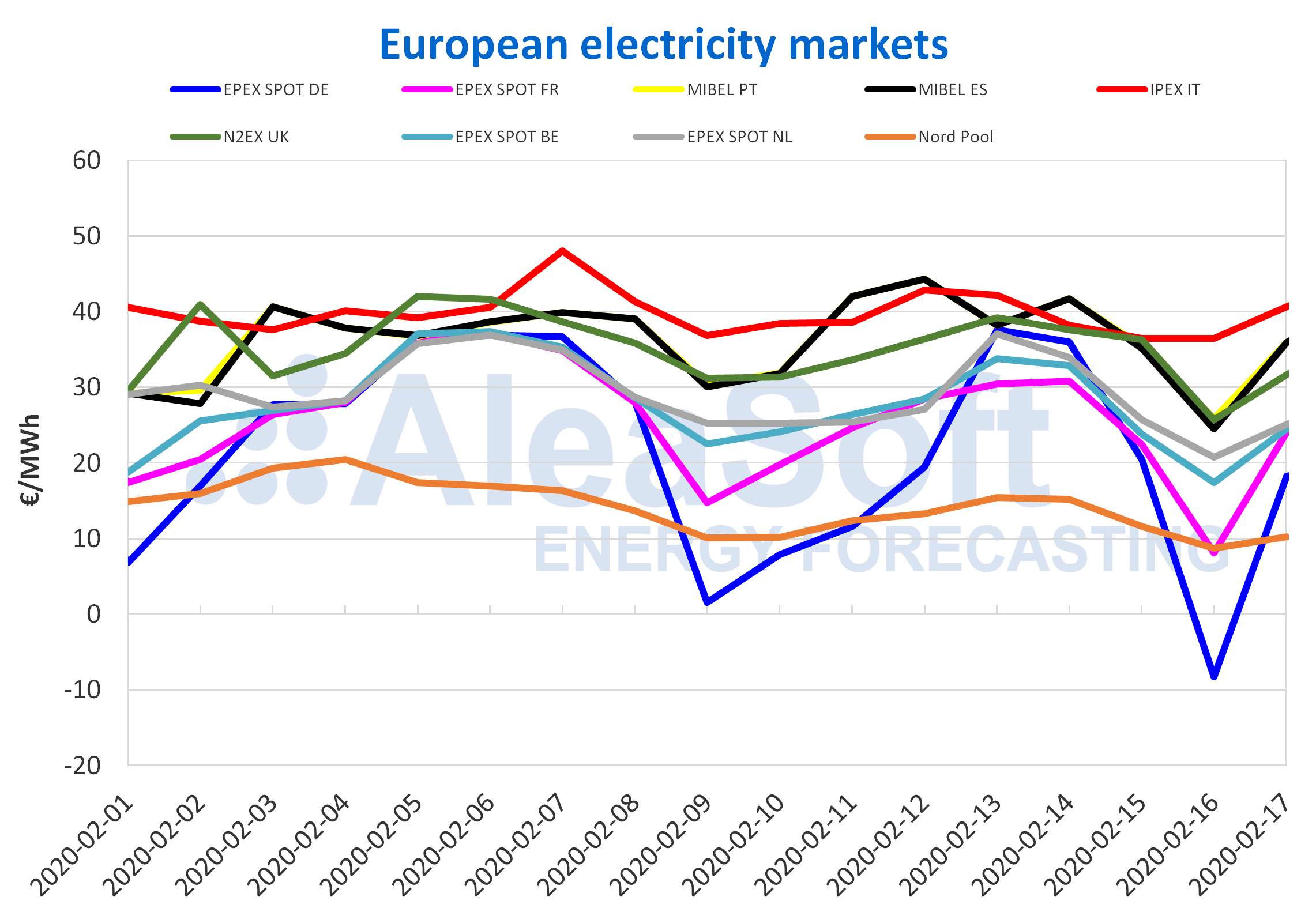 The prices of the main European electricity futures markets showed a slight recovery trend last week. Even in those markets where the end of the week, at the session of Friday, February 14, was priced lower than the previous Friday, February 7, there is a tendency to recover the price during the week. The Germany’s EEX market was the one that most increased its price in the past week, 1.2%. Meanwhile, Great Britain in both the EEX market and the ICE market was the region that fell the most in the week. On Tuesday, February 11, it reached its minimum price in 2020, of €32.45/MWh in the EEX market and at the end of Friday, February 14, the price was 1.1% lower than the previous Friday.

On the other hand, the product of next year 2021 presents a more defined behaviour. All European markets analysed at AleaSoft had an upward trend. The most moderate is that of the Iberian region, both the EEX market of Spain and the OMIP market of Spain and Portugal registered increases between the settlements of Friday, February 7 and 14, of 1.6%. Meanwhile, the rest of the markets registered higher increases, reaching 6.7% of the ICE market of the Nordic countries, where having a lower price the percentage value is more sensitive to changes, because in absolute terms the ICE market of the Netherlands was the market with the largest increase, of €1.86/MWh.

The Brent oil futures for the month of April 2020 in the ICE market on Monday, February 10, reached a settlement price of $53.27/bbl, which is the lowest for more than thirteen months. But, as of Tuesday, February 11, the prices began an upward trend that continued the rest of last week. On Friday, February 14, the settlement price was $57.32/bbl, 5.2% higher than that of Friday of the previous week and the highest so far this month.

These price increases are related, on the one hand, with the fact that Chinese refineries took advantage of the low prices to buy and, on the other, with the decline in Libyan production due to tensions in the country.

As the concerns about the effects of the coronavirus on the demand continue and taking into account that the production levels in countries that are not part of OPEC and the reserve levels are high, the new production cuts, recently recommended by the OPEC technical committee, may still be necessary to prevent an excess supply lowering the prices again. Although if the production decline continues in Libya and the instability in Iraq increases, the prices may continue to rise in the coming days.

The TTF gas futures prices in the ICE market for the month of March 2020 remained fairly stable during the past week, with settlement prices below €9/MWh. The settlement prices registered ranged between €8.56/MWh of Tuesday, February 11, and €8.89/MWh of Thursday, February 13. Tuesday’s price, in addition to being the lowest in the week, is also the lowest in the last two years.

The prices of TTF gas in the spot market during the past week also remained stable at around €9/MWh. The index price values varied between €8.81/MWh and €9.12/MWh. There were no prices as low as that of last week since the first half of October 2019.

In the coming days, the gas prices are expected to remain low due to the current supply levels that are high.

On the other hand, the API 2 coal futures in the ICE market for the month of March 2020 began the week of Monday, February 10, with a settlement price of $47.95/t, the lowest of the last two years. But on Tuesday, February 11, they started an upward trend that continued the rest of the week. On Friday, February 14, the settlement price was $51.90/t, 5.7% higher than that of the previous Friday and the highest so far this month.

The decline in national coal production in China due to the coronavirus, increased its imports, which exerted its influence on the evolution of prices. This trend could be maintained in the coming days due to transportation restrictions imposed by the Chinese government to try to control the expansion of the coronavirus that prevents the supply of coal from the country’s mining areas.

As for the CO2 emission rights futures in the EEX market for the December 2020 reference contract, they started last week with a Monday settlement price of €23.16/t, the lowest registered since October of 2019. However, as of Tuesday, the prices rose until reaching a settlement price of €24.40/t on Thursday, February 13, the highest so far this month. On the other hand, on Friday, February 14, the price fell again to €24.29/t. However, this price is still 4.1% higher than that of the previous Friday. 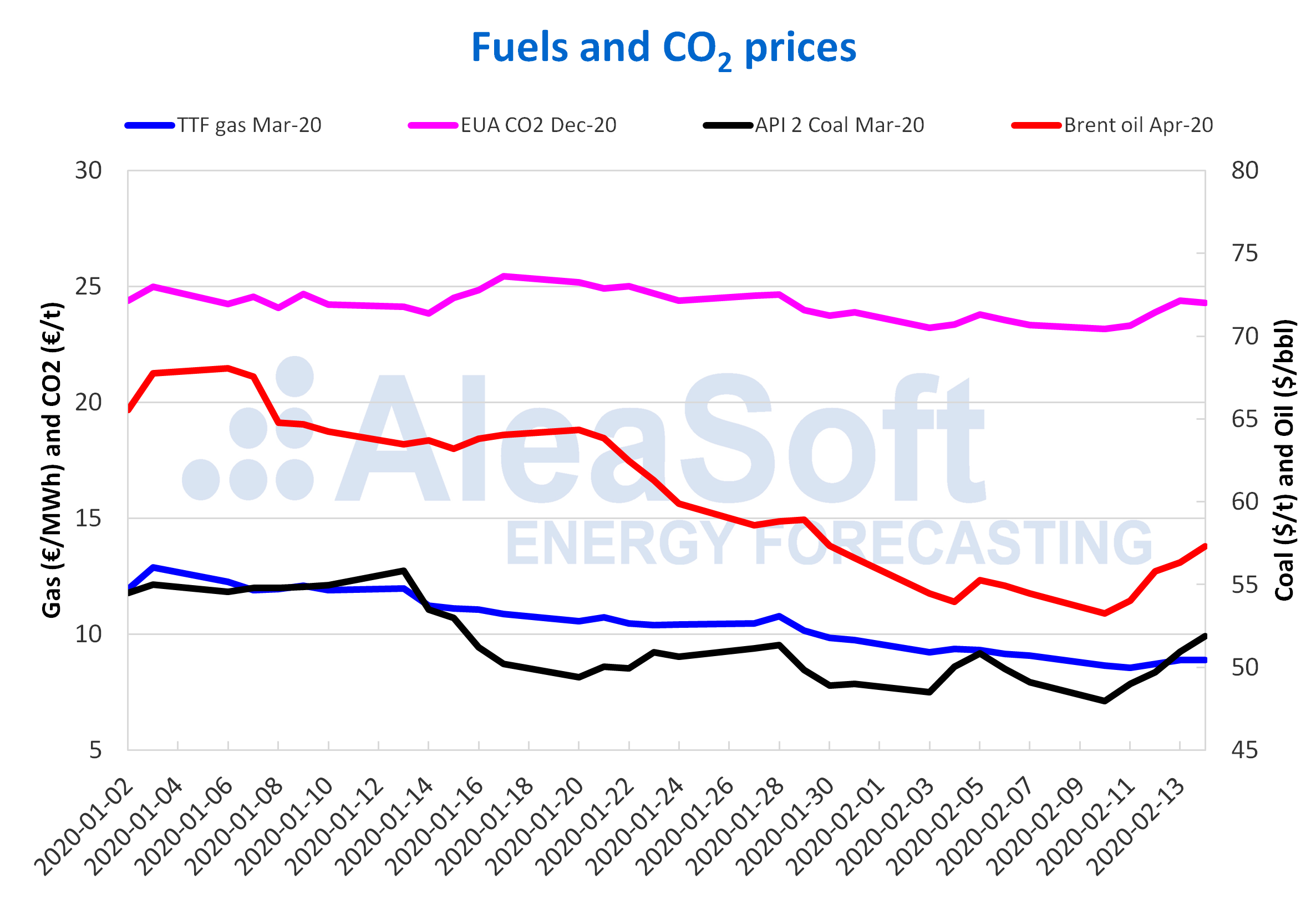