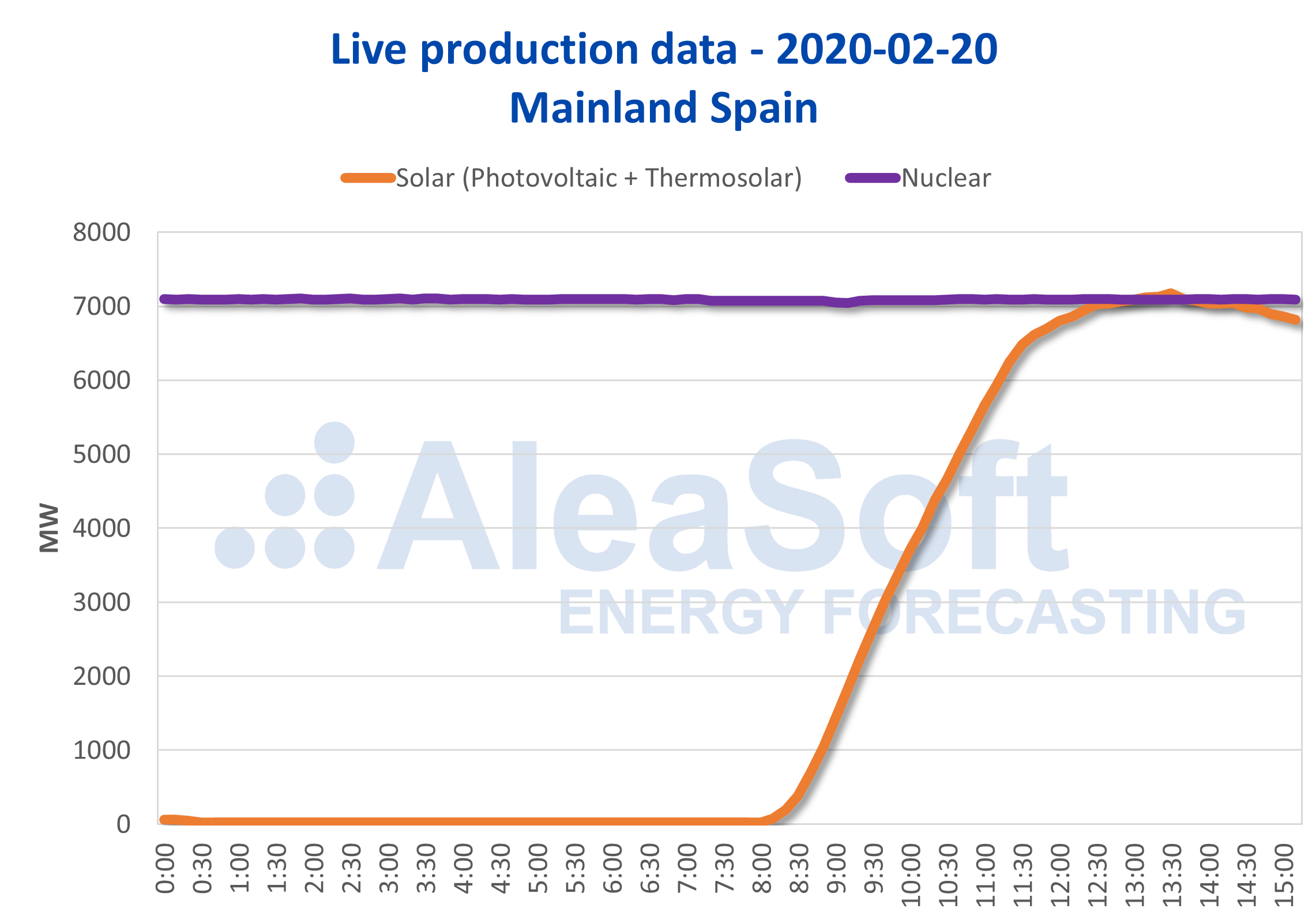 As for the solar energy production of the first three days of this week, the average level was higher than that of last week in most European markets. The percentage increase in Portugal stands out, which was 25.5%, although in absolute terms this translates to less than 1 GWh on average. The most lagging market was the Italian, which registered a 6.1% drop from last week’s average. The rest of the markets registered increases between 2.3% and 6.5%.

In the accumulated from February 1 to 19, in year‑on‑year terms, the rises in solar energy generation in the European markets also prevail. In the two countries of the Iberian Peninsula the production increased, in Spain by 17% and in Portugal by 13%. In the Italian market there was a year‑on‑year increase of 4.1%. On the other hand, this time the markets of Germany and France had negative differences, of ‑12% and ‑3.8% respectively.

At AleaSoft, this week’s total solar energy production is expected to be higher than that of last week in most of the analysed European markets. 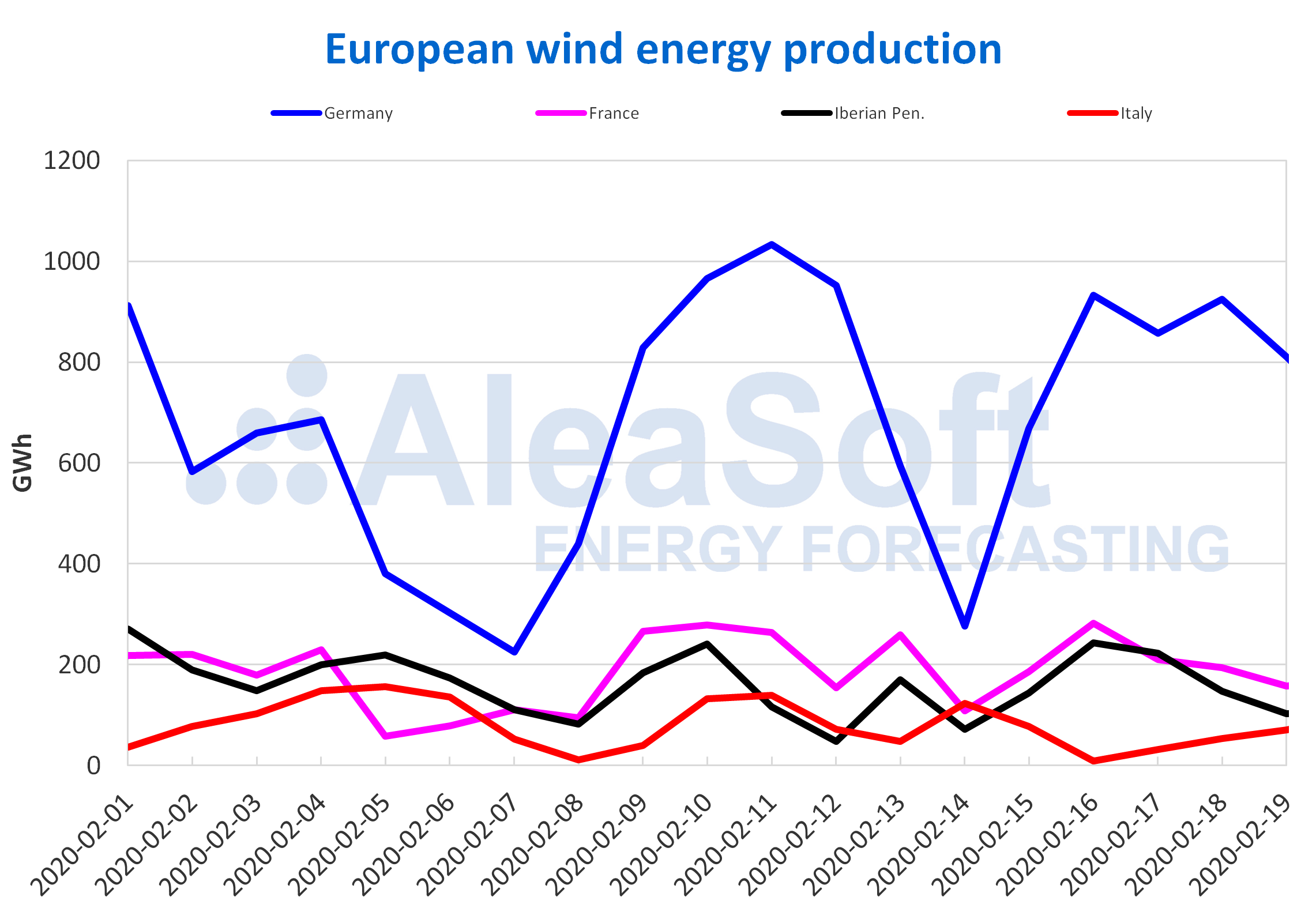 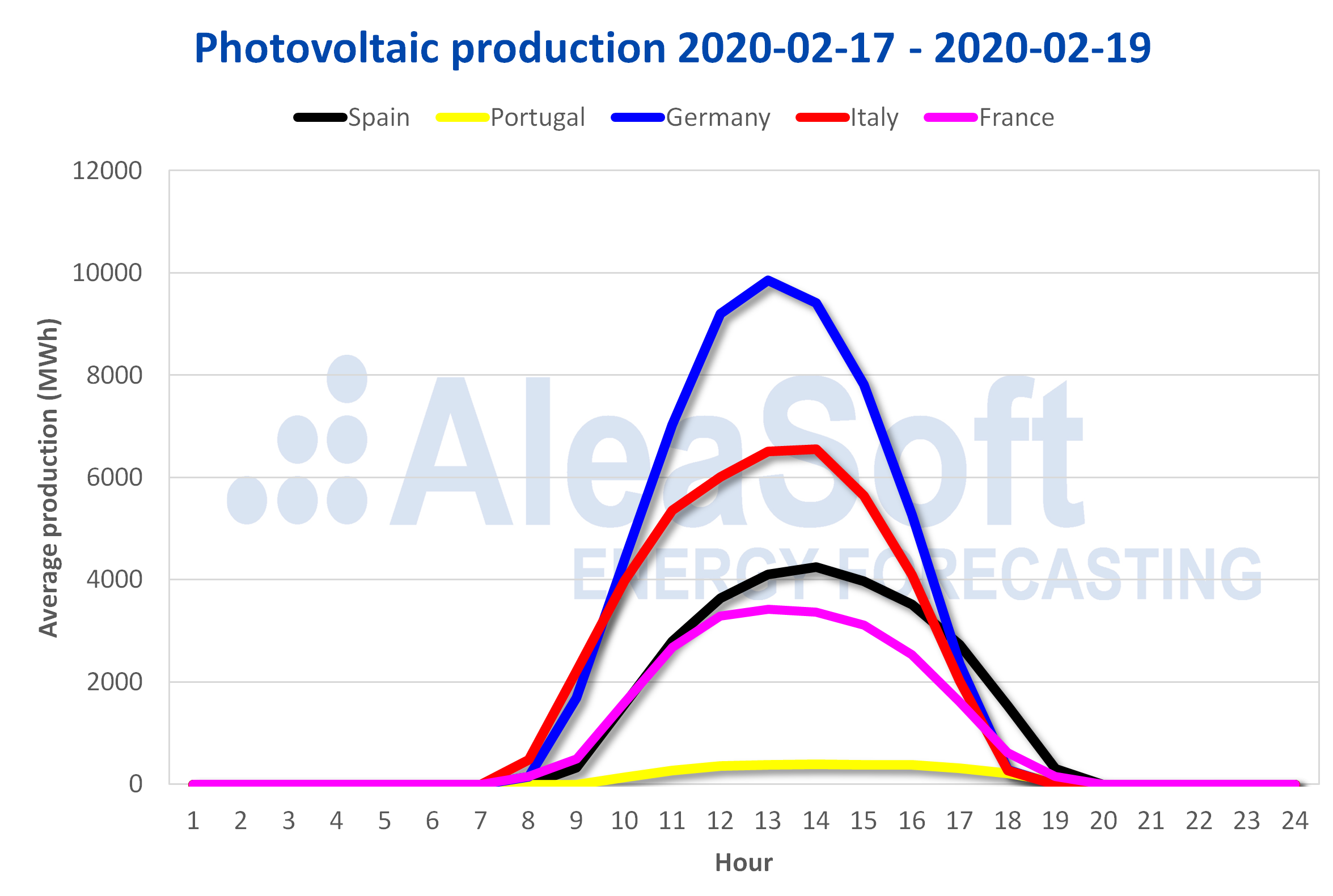 The wind energy production registered an unequal behaviour in the main electricity markets in Europe from Monday, February 17, to Wednesday, February 19, compared to the average values of the previous week. While the Portuguese market registered a rise of 87%, the Italian had a significant drop of 39%. Apart from these extremes, there were the cases of Germany, the Iberian Peninsula and France, where the variations were 11%, 6.7% and ‑14% respectively.

During the first 19 days of February there were year‑on‑year decreases in wind energy production in France, the Iberian Peninsula and Italy, whose values were ‑25%, ‑14% and ‑40% respectively. On the other hand, there were increases of 9.7% in Germany and 34% in Portugal.

For this week, drops in wind energy production are expected in much of the European continent. 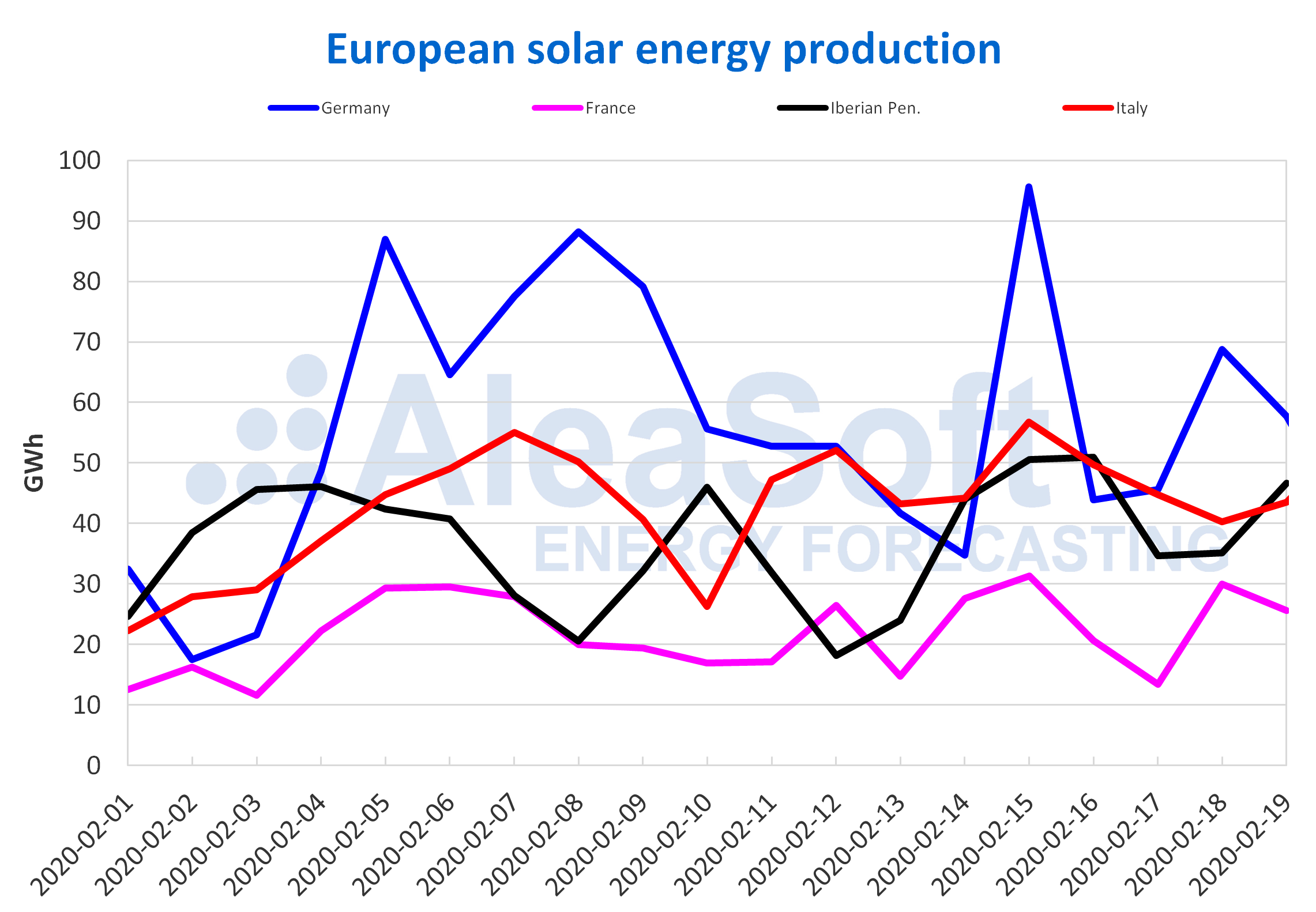 The electricity demand fell widely in the European markets. The markets of Germany and Portugal were the markets with the most pronounced declines, with values of 1.7% and 1.9% respectively. The Belgian market continued to decline this week, as happened during the same period of the previous one. On this occasion the fall was 0.6%. The rest of the markets registered declines between 0.9% and 1.4%.

This week is expected to conclude with less demand than last week in most European electricity markets. 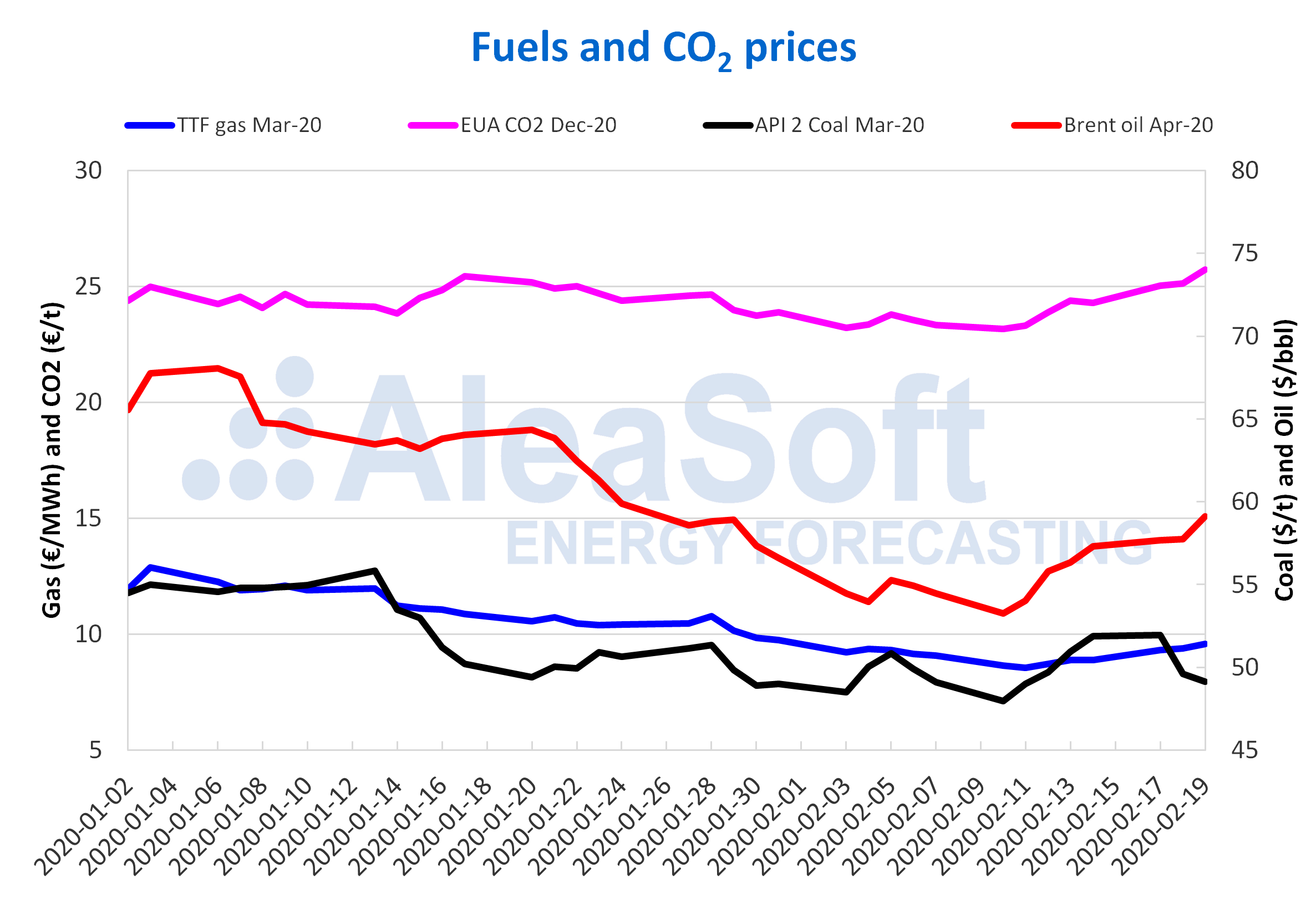 According to the wind energy production records from February 17 to 19, there was a decrease in the Spanish market of 4.9%. In the year‑on‑year comparison of the elapsed days of February, the decrease is slightly greater, 7.5%. It is expected that at the end of the week the wind energy production will be lower than that of the week of February 10.

Spain’s electricity demand fell 0.6% so far this week compared to the same period of the week of February 10. At AleaSoft it is expected that at the end of this week the demand of Spain will exceed that of last week.

The average level of the nuclear energy production was 170 GWh from Monday to Wednesday of this week. At the moment all nuclear power plants of Spain are operating correctly. 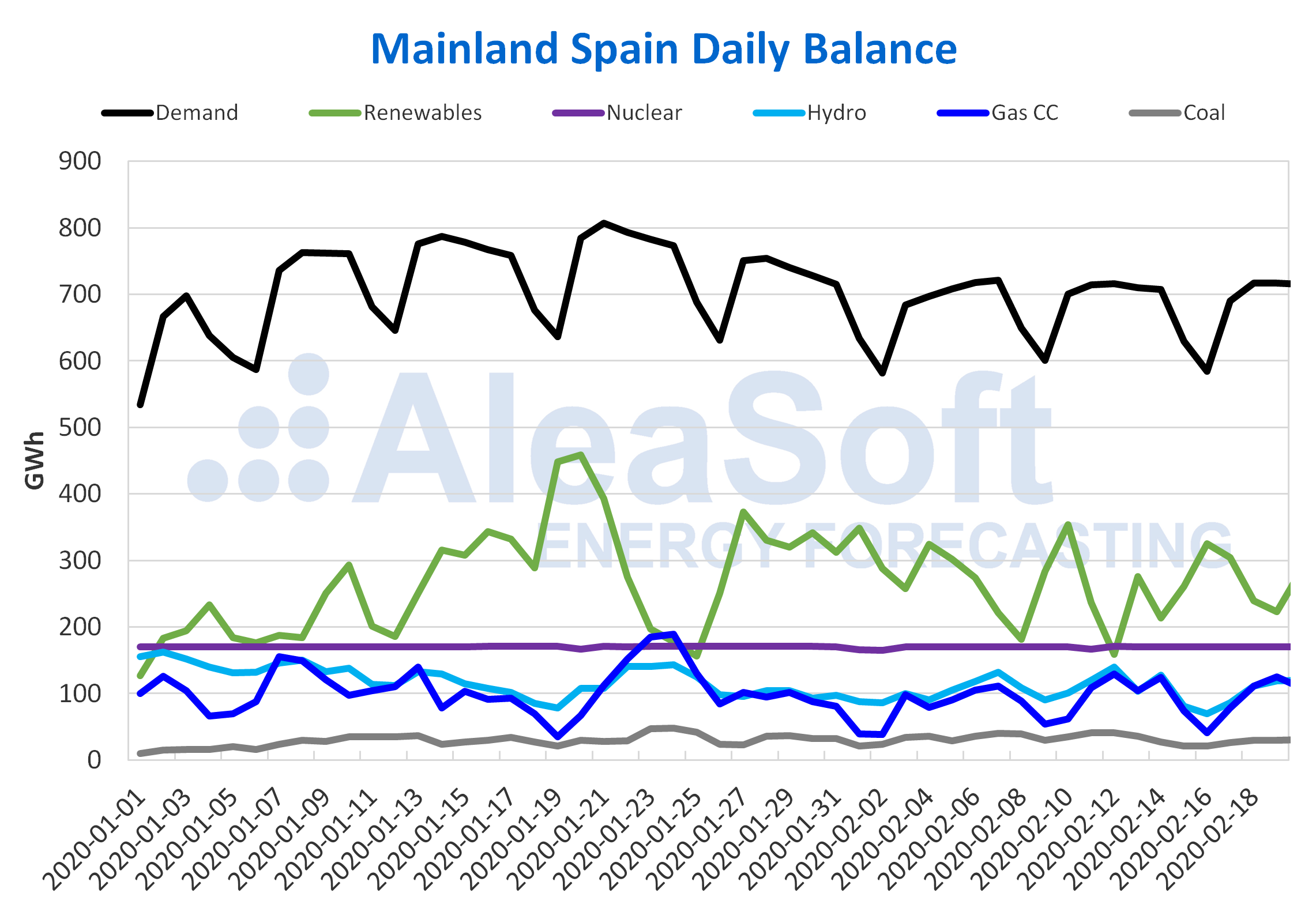 The accumulated energy of the hydroelectric reserves fell 0.5% this week compared to the previous bulletin. The reserves now contain about 13 108 GWh of the 22 964 GWh of the total capacity, according to data from the latest Hydrological Bulletin of the Ministry for Ecological Transition and Demographic Challenge.

So far this week, the main European electricity markets had a price recovery after the fall of the weekend. The prices of the EPEX SPOT market of Germany, France, Belgium and the Netherlands had a considerable degree of coupling on February 19. The maximum difference between them was €0.23/MWh and this difference is reduced to €0.04/MWh if we do not take into account the French market, which presented less coupling than the rest.

On February 19 and 20, the MIBEL market of Spain and Portugal took the highest price position in Europe, disputed in recent weeks with the IPEX market of Italy. In general, during the elapsed days this week, the markets adopted their usual configuration, placing the MIBEL market, the IPEX market and the N2EX market of Great Britain in the group of the highest priced markets, in the vicinity of €40/MWh. On the other hand, the prices of the EPEX SPOT market of Germany, France, Belgium and The Netherlands formed the group of the lowest prices, all concentrated around €30/MWh. And as if it was a separate case, the Nord Pool market of the Nordic countries, which separates almost €20/MWh from the other markets, is still very close to €10/MWh. Compared to the equivalent days of the previous week, in general the prices for this week of February 17 are very similar. However, at the end of the week, the average prices are expected to be higher in most markets.

In the coming days, the market prices are expected to fall below current levels, due to the lower demand of the weekend. In addition, a more pronounced decline is expected in the German market, where the lower demand will be combined with an increase in temperatures and renewable energy production. 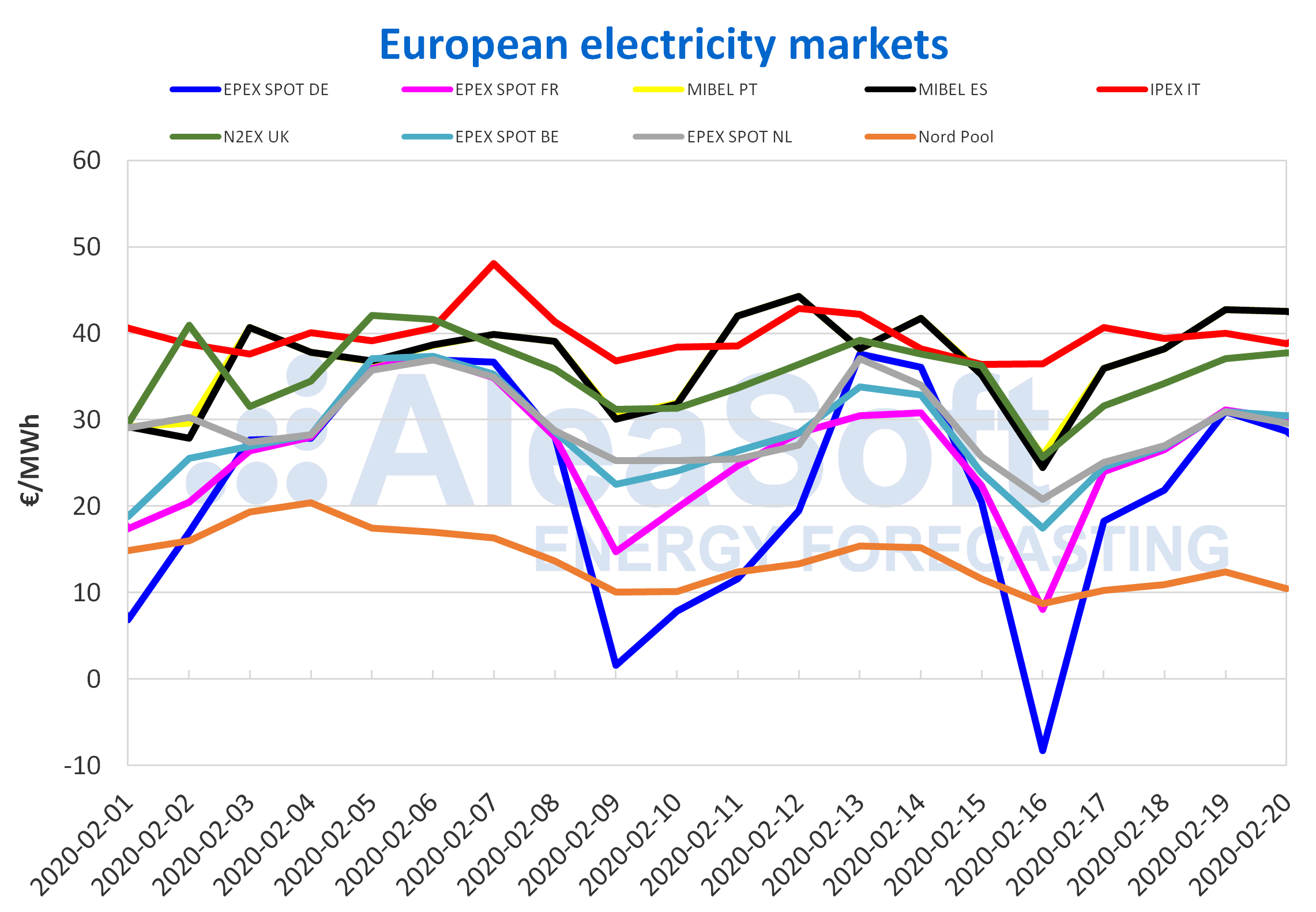 The MIBEL market prices climbed almost €7/MWh so far this week, although they are not expected to exceed €44.28/MWh of daily average registered on February 12. With respect to the equivalent days of the previous week, the average price hardly varied so far this week. However, by the end of this week it is expected to be higher than that of last week, because in these comparisons the low price that there was in all markets on the weekend of February 15 and 16 is not taken into account yet.

The European electricity futures markets showed, for the most part, obvious signs of recovery in their next quarter product price. The exception is the Nordic region, both in the ICE market and in the NASDAQ market, in which the price collapsed again with differences that are around 18% between the end of last week, in the session of February 14, and the last session so far, yesterday, Wednesday, February 19. The rest of the markets presented price increases ranging from 0.2% of the Belgian ICE market to the 3.5% increase registered by Great Britain both in the EEX market and in the ICE market.

As for the product of the year 2021, the behaviour was similar. The Nordic region registered decreases, this time almost identical in the ICE and NASDAQ markets, of 5.4%. Meanwhile, the rest of the markets increased their price, being the EEX market of Italy the one that did the least, with 0.2% growth so far this week, while the greatest price increase in these days was registered, as in the product of Q2‑20, by the EEX market of Great Britain, ending the session of February 19 at €43.20/MWh for a 1.9% increase in its price.

The Brent oil futures prices for the month of April 2020 in the ICE market, in the first days of this week continued with the upward trend of the previous week. In this way, on Wednesday, February 19, they reached the highest settlement price so far this month, with a value of $59.12/bbl, which is 6.0% higher than the one registered the previous Wednesday.

This price evolution is related to the decrease in the number of new detected cases of coronavirus in China and the decline in production in Libya.

The tensions in the Middle East and a possible decline in Venezuelan oil exports due to the sanctions imposed by the United States this week could allow the Brent oil futures price to continue rising in the coming days, especially if the number of new coronavirus cases continues to decline.

In the case of the TTF gas futures prices in the ICE market for the month of March 2020, the first days of this week they recovered and settlement prices above €9/MWh were registered again, unlike last week. On Monday, February 17, an upward trend began that continued in the following days, reaching a settlement price of €9.57/MWh on Wednesday, February 19. This value is 9.7% higher than that of Wednesday of the previous week and it is the highest so far this month.

These increases are related to unplanned supply interruptions. However, an increase in temperatures would stop these rises, since, despite having decreased the gas storage levels, they are still higher than those of last year at this time.

The TTF gas prices in the spot market also increased during the first days of this week. However, today, Thursday, February 20, the index price was €9.50/MWh, €0.15/MWh lower than that of yesterday, but still 4.7% higher than that of Thursday of last week.

Regarding the API 2 coal futures prices in the ICE market for the month of March 2020, they started this week continuing with the upward trend of last week. Thus, on Monday, February 17, a settlement price 8.3% higher than that of the previous Monday, of $51.95/t, was registered and which is the highest so far this month. However, on Tuesday the prices began to fall and on Wednesday, February 19, the settlement price was $49.15/t, 1.1% lower than that of the previous Wednesday.

As for the CO2 emission rights futures in the EEX market for the reference contract of December 2020, the first days of this week registered settlement prices above €25/t and maintained an upward trend. On Wednesday, February 19, the maximum so far this year was reached with a value of €25.72/t. These increases may be related to a greater participation of the financial sector in the market.