AleaSoft, March 30, 2020. Last week there was a general drop in prices in the electricity markets. The wind and solar energy production increased in several markets, which together with the effects of the COVID‑19 crisis, led to the fall in prices. On Saturday, March 28, minimum prices for the last two years were reached in the N2EX, EPEX SPOT of the Netherlands and Nord Pool markets. The Brent oil, CO2 and TTF gas prices continued to drop, the latter with values not seen since 2009.

During the week of March 23, the solar energy production increased compared to the week of March 16 in most electricity markets of Europe, except in the case of the Italian market. The generation with solar technology increased by 35% in Germany, where on March 23 the maximum daily production so far in the first quarter of the year was reached, of 228 GWh. The daily maximum for the first three months of the year was also registered in Portugal, where a production of 4.5 GWh was registered on March 26. The weekly increase in Portugal was 31%. The Spanish market had the largest increase in production with this technology, of 55%. The decrease registered in Italy was 21%.

In the elapsed days of March, there were both year‑on‑year falls and increases in solar energy production. In Germany the increase was 34%, followed by Portugal and Spain with 9.5% and 2.3% respectively. In the case of Italy, there was a decrease of 8.5%.

For this week, the analyses of the solar energy production carried out at AleaSoft indicate that there will be decreases in a large part of the European markets compared to the production registered last week. 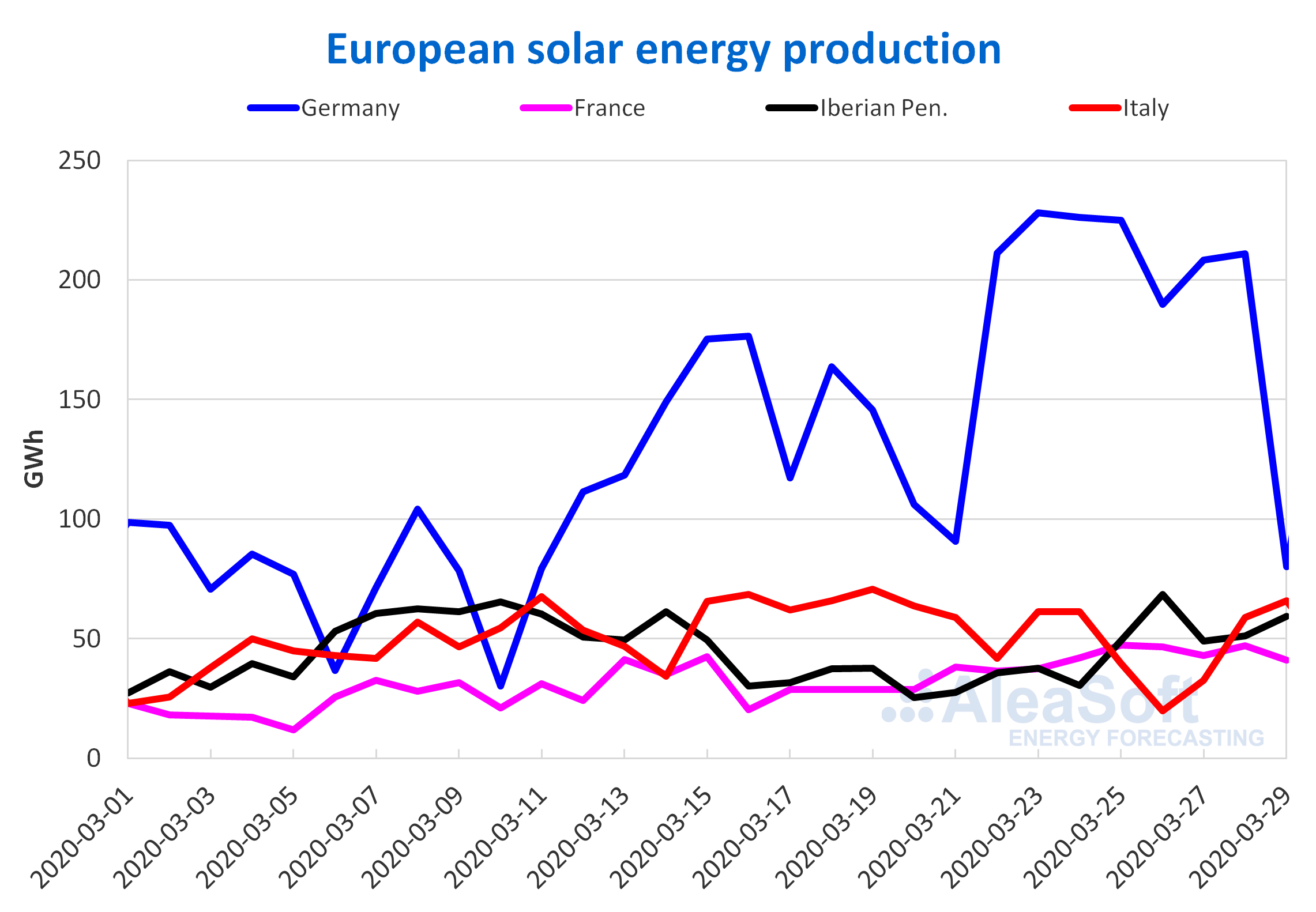 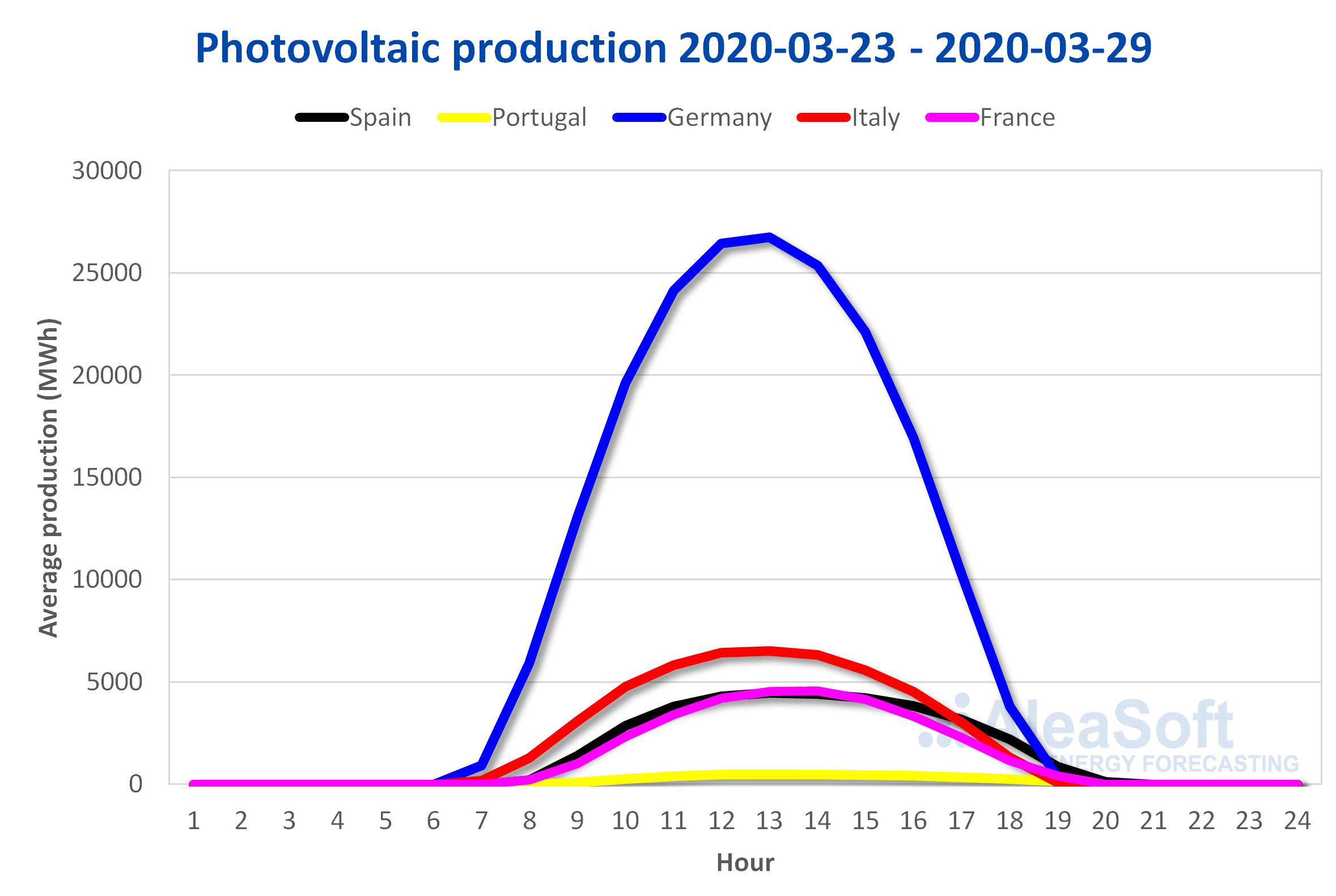 The wind energy production exhibited an uneven behaviour during the past week. In the Italian market it doubled and exceeded the previous weekly production by 123%. Other increases occurred in France and Germany, where weekly growth rates were 31% and 52% respectively. In the Iberian Peninsula there was a decrease of 19%.

From March 1 to 29, the wind energy production suffered decreases in a large part of the European markets. In Italy the fall was 21%, while in Germany it was 12%. In the Iberian Peninsula there was an increase of 11%.

AleaSoft expects that the wind energy production will grow during this week in the Iberian Peninsula, and that it will decrease in the rest of the markets. 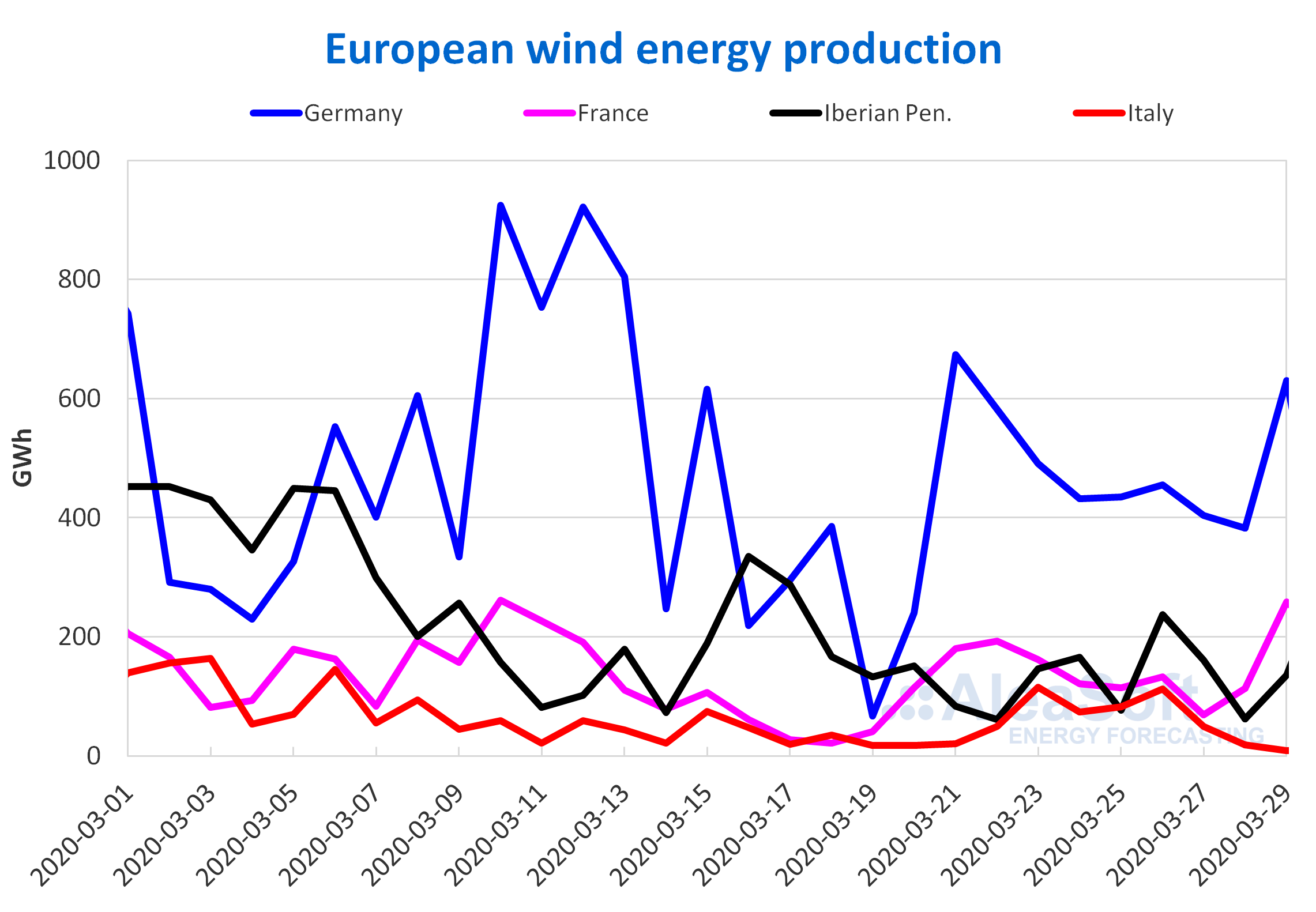 The electricity demand fell last week in general compared to the week of March 16, mainly due to the confinement established in several countries because of the coronavirus. In several markets, the demand varied by more than 7%, including Great Britain, Italy, Portugal and Belgium. 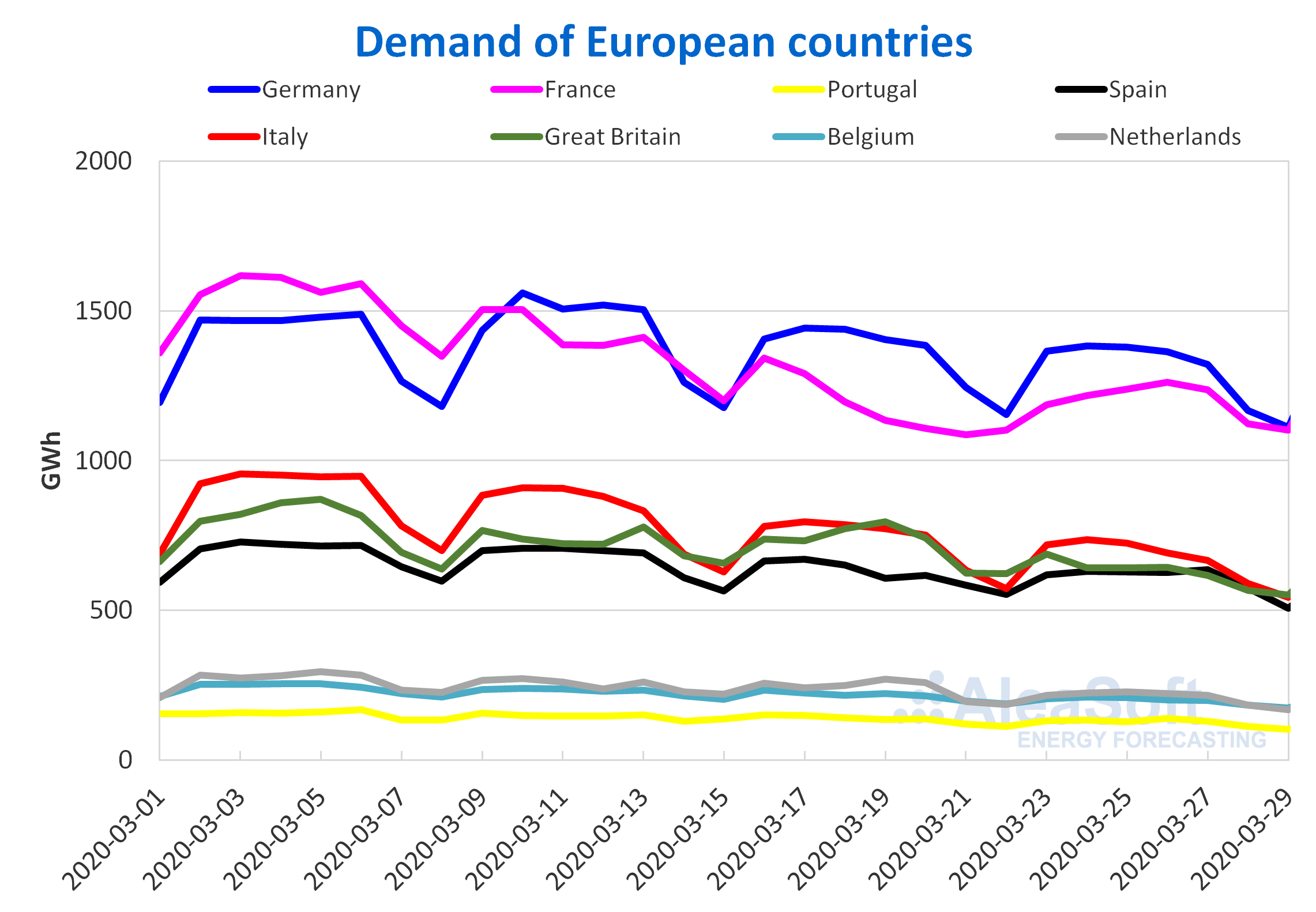 The demand of the market of Great Britain had the greatest changes during the past week, falling by 13%, as a consequence of the establishment of the confinement of its citizens on Monday, March 23, to stop the spread of the coronavirus. From Tuesday 24 it was when the changes in demand were most appreciated, among which are the decrease in consumption during working hours and the increase after 6 pm. 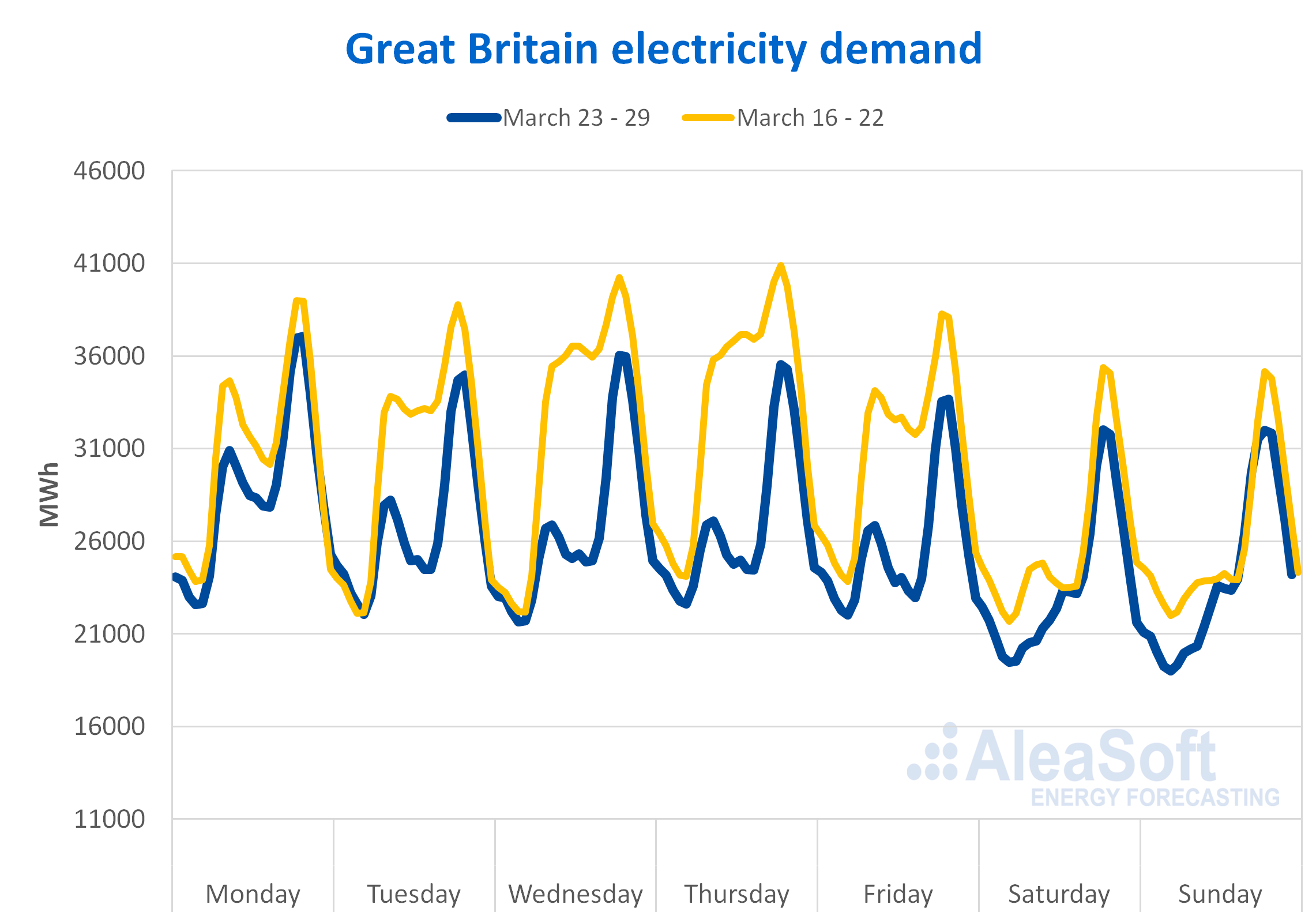 Last week the evolution of the electricity demand in Italy was also marked by new measures adopted by the Government on March 24 to contain the coronavirus infections. In what was the third of confinement in Italy, the decrease in demand was 8.2%. Similar to the behaviour in Great Britain, the curve in Italy shows greater similarity between weeks during the characteristic hours of household consumption, approximately after 6 pm. 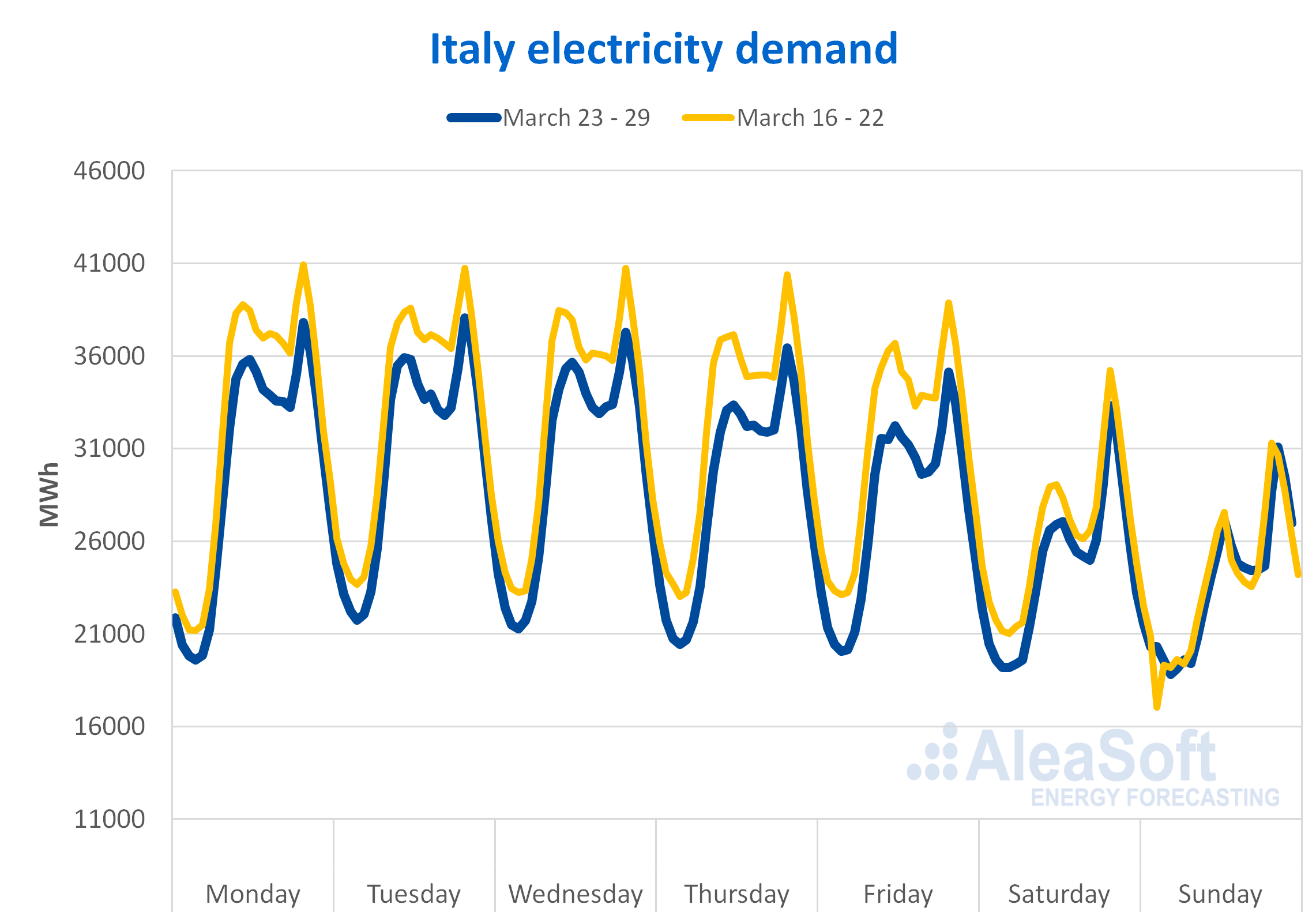 The AleaSoft‘s forecasts indicate a drop in average temperatures for this week, which could offset the downward trend in demand in the European markets somewhat. Obviously, this would be subject to the predominant influence of the changes in industrial and commercial activity such as those we saw in recent weeks.

During the past week of March 23 there was a general drop in prices of the electricity markets in Europe. Specifically, on Saturday, March 28, the lowest price of at least the last two years was registered in the N2EX market of Great Britain, the EPEX SPOT market of the Netherlands and the Nord Pool market of the Nordic countries, with prices of €20.37/MWh, €3.69/MWh and €5.02/MWh respectively. For this Monday, March 30, the Nordic countries market settled with an average price of €8.49/MWh. In this way they already have 20 consecutive days with a price of less than €10/MWh in this market.

The MIBEL market of Spain and Portugal was the one that registered the lowest drop between the two analysed weeks, with decreases of 8.3% and 7.5%, respectively. Meanwhile, in the rest of the markets the variations in the weekly average price were between ‑12% and ‑21%.

One of the main causes of the reduction in prices in the electricity markets is the decrease in demand, caused by the measures taken by the European governments to curb the expansion of the coronavirus. In some of the markets, this behaviour was also influenced by an abundant production with renewable energies, as in the case of the German market.

The effect of the measures implemented by the governments to slow the advance of the COVID‑19 is felt in Europe’s electricity markets. This crisis will be overcome and the prices, along with other market variables, will return to their usual values but, in the meantime, the price outlook in the main European electricity markets points downward. 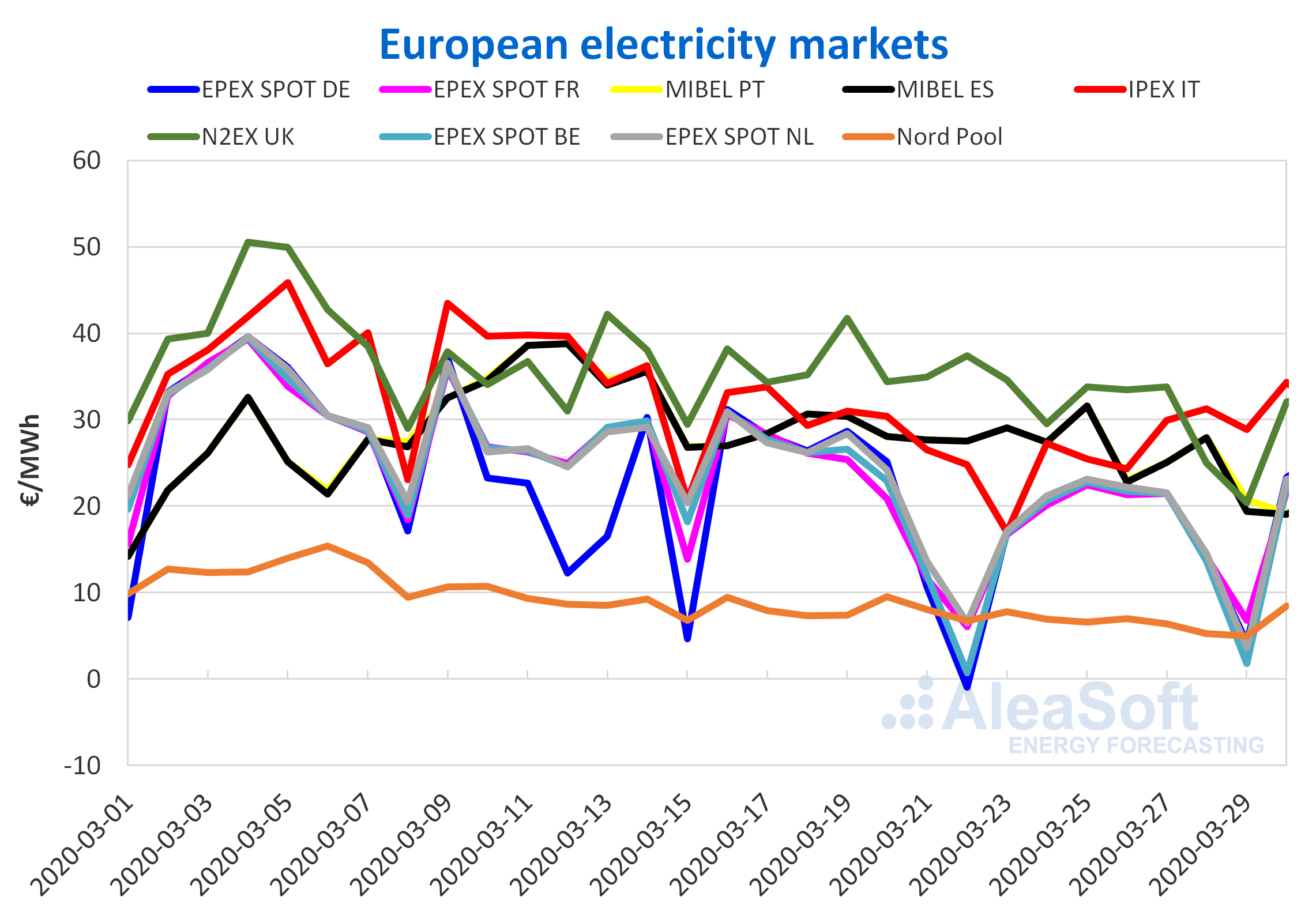 The AleaSoft price forecasts indicate that over the course of this week the prices in most European electricity markets will drop in response to lower demand due to the continuation and in some cases the intensification of the movement restrictions to curb the spread of the coronavirus, in addition to a recovery in temperatures.

The electricity futures prices for the second quarter of 2020 settled again last week with a general decline compared to the previous week. At the settlement of last Friday, March 27, the effects of the coronavirus crisis continued to be noted in the futures for the next quarter. The greatest decreases were registered in the ICE and NASDAQ markets of the Nordic countries, with falls of 25% compared to the previous Friday. The rest of the markets also presented important variations, from ‑16% registered in the EEX market of France and the ICE market of Belgium, to ‑6.8% registered in the EEX market for Italy.

The outlook for electricity futures for next year 2021 was different, with less marked variations, between 2.2% and ‑1.6% in the European electricity futures markets analysed at AleaSoft. The exception was the ICE and NASDAQ markets of the Nordic countries, which fell 8.5% and 8.3% this Friday compared to the previous Friday. The behaviour of this product reflects the uncertainty caused by the spread of the pandemic and the recovery expectations for the following year.

The Brent oil futures prices for the month of May 2020 in the ICE market began last week with slight increases until reaching a settlement price of $27.39/bbl on Wednesday, March 25, the highest in the week and 10% higher than that of Wednesday of the previous week. But on Thursday and Friday there were decreases compared to the previous day of 3.8% and 5.4% respectively. Thus, the settlement price of Friday, March 27, was $24.93/bbl, 7.6% lower than that of the previous Friday and only $0.05/bbl higher than the historical low reached on Wednesday, March 18. Today they were trading below $24/bbl, even reaching values below $22/bbl.

The evolution of oil prices is highly influenced by the rapid expansion of the coronavirus worldwide and the measures taken by governments to fight against both the health and economic crises. On the other hand, Russia and Saudi Arabia continue with their plans to increase their production from April 1, at a time when demand is low and the storage capacity is very limited, so prices could continue to decline.

The TTF gas futures prices in the ICE market for the month of April 2020 last week remained below €8/MWh and maintained an overall downward trend. As a result, the settlement price of Friday, March 27, was €7.22/MWh. This price is 13% lower than that of the same day the previous week and the lowest in the last two years. Today, the downward trend continued and reached values below €7/MWh.

On the other hand, the API 2 coal futures prices in the ICE market for the month of April 2020 last week remained above $50/t. The first days there were increases that allowed reaching a settlement price of $54.45/t on Wednesday, March 25. This price was 8.3% higher than that of Wednesday of the previous week and the highest since the first half of January. Subsequently, on Thursday and Friday there were decreases of 1.2% and 2.2% respectively. Despite this, the price of Friday, March 27, was $52.60/t, 4.8% higher than that of Friday of the previous week. The possibility of a decrease in supply due to the closure of mines and the reactivation of the industrial production in China could be preventing a further decrease in coal prices. However, it is expected that China will recover its coal production levels soon, reducing the need to import it.

As for the futures of CO2 emission rights in the EEX market for the reference contract of December 2020, on Monday, March 23, they registered a settlement price of €15.54/t, 20% lower than the same day of the previous week. However, the increases from the previous day of 8.0% and 4.4% registered on Tuesday and Wednesday respectively, led to a settlement price of €17.51/t on Wednesday, March 25, a 14% higher than that of the previous Wednesday. But from Thursday the prices fell again and the settlement price of Friday, March 27, was €16.40/t. This behaviour is related to the spread of the COVID‑19 coronavirus pandemic in Europe and the measures adopted to contain it, which are expected to continue to exert their downward influence on the emission rights prices in the coming weeks. 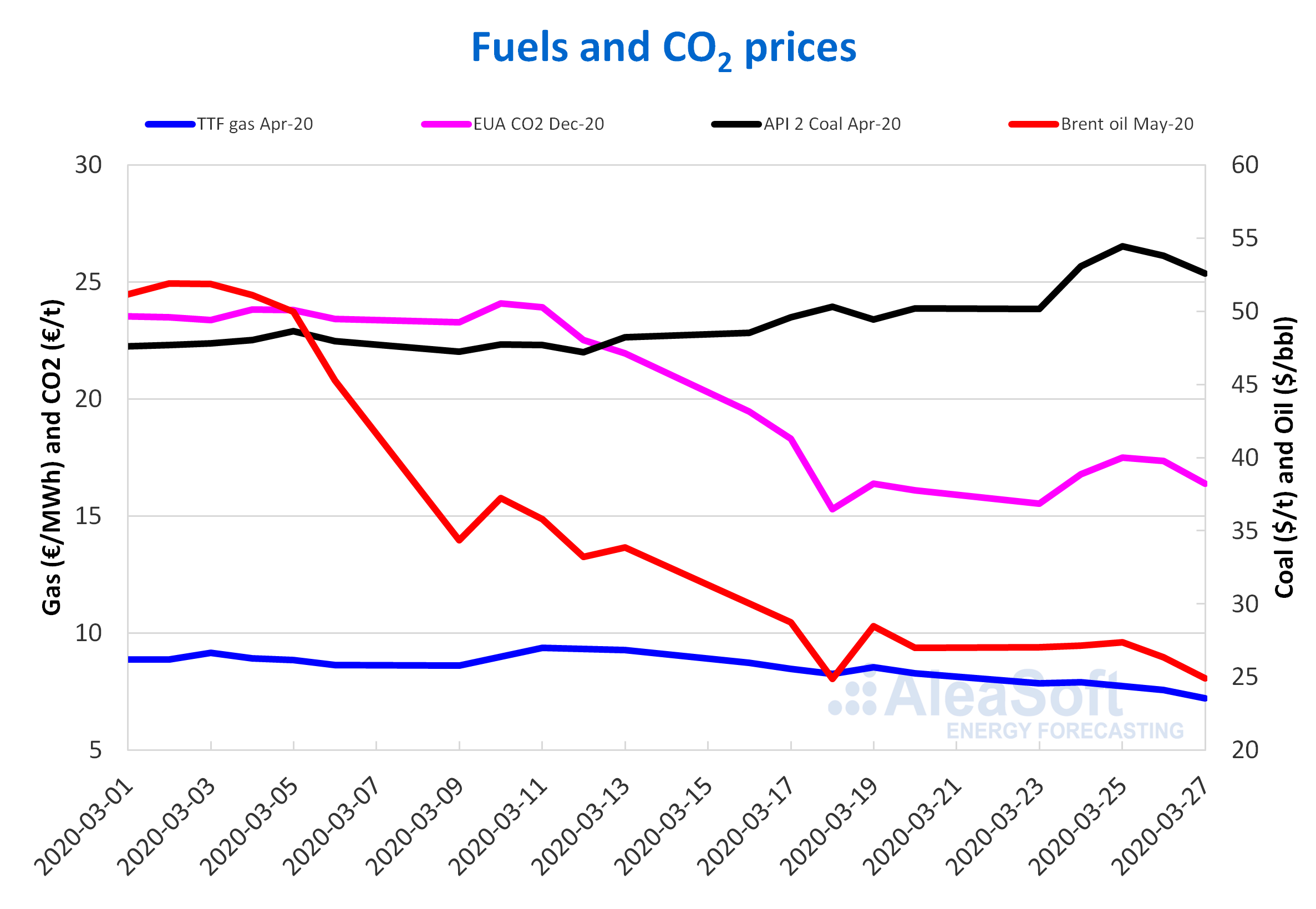