AleaSoft, July 2, 2019. The first half of 2019 was marked by the continued decline in European electricity market prices, following the trend of the last quarter of 2018. Several factors have been aligned to favour this fall in prices: on the one hand, the fall of the gas and coal prices and on the other hand, the decrease of the demand and the increase of the renewable wind and solar energy production.

The prices of Brent oil futures for the M+2 product in the ICE market showed an increasing trend during the first part of the first half of 2019 until reaching the maximum value of the period, of 74.57 $/bbl, on April 24. As of that date, the trend changed and it started a downward trend, although towards the end of June it started to recover, settling at yesterday’s session, on July 1, at 65.05 $/bbl. The main factors that pushed oil prices up in the just-ended half-year were the political crisis in Venezuela, the geopolitical tensions between the United States and Iran and the OPEC production cuts. Everything seems to indicate that these cuts will be extended until the first quarter of 2020, as agreed by OPEC members yesterday, July 1, although it is still pending ratification by countries not belonging to the group. On the other hand, the commercial conflict between the United States and China is the main factor that caused prices to fall.

The CO2 emission rights futures prices in the EEX market for the reference contract of December 2019, ended the first half of 2019 with an increase of 3.8% compared to the beginning of the year. During approximately the first quarter of the year until the first week of April, they kept oscillating between 18.80 €/t and 25.40 €/t, starting at that point a vertiginous growth to reach historical maximum values, being 7.54 €/t, the settlement price of April 23, the highest of the half-year. After this rise, the prices remained in the range between 21.90 €/t and 27.60 €/t. During the first half of the year, the volatility in this market was closely related to the news that were appearing about the progress of the negotiations for the Brexit. 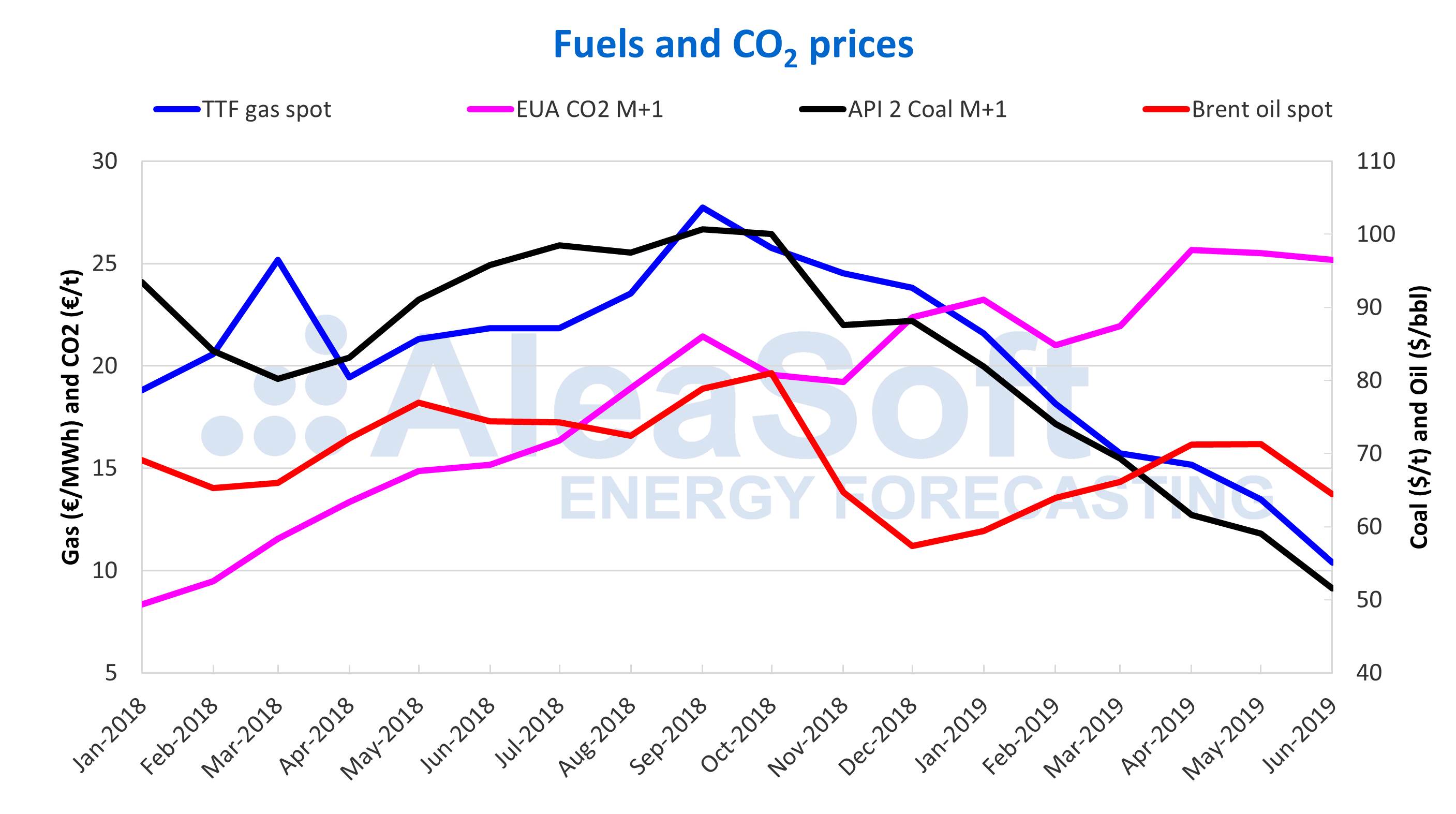 The main wholesale European electricity market prices registered an important fall during the first half of 2019. After the upward trend of the CO2 emission rights price on the first half of 2018 slowed slightly from October and, most of all, due to the fall in the gas and coal prices since then, the prices of the electricity markets did not stop falling. The most important decline were recorded in the EPEX SPOT market of Belgium, with a price drop of 37% in the first half of 2019 compared to the second half of 2018. Price drops in the other EPEX SPOT markets of Germany, France and the Netherlands were around 30%, while for the MIBEL market of Spain and Portugal, the IPEX market of Italy and the N2EX market of Great Britain were around 20%. The market with the lowest price decrease was the Nord Pool of the Nordic countries, which fell by 16%. 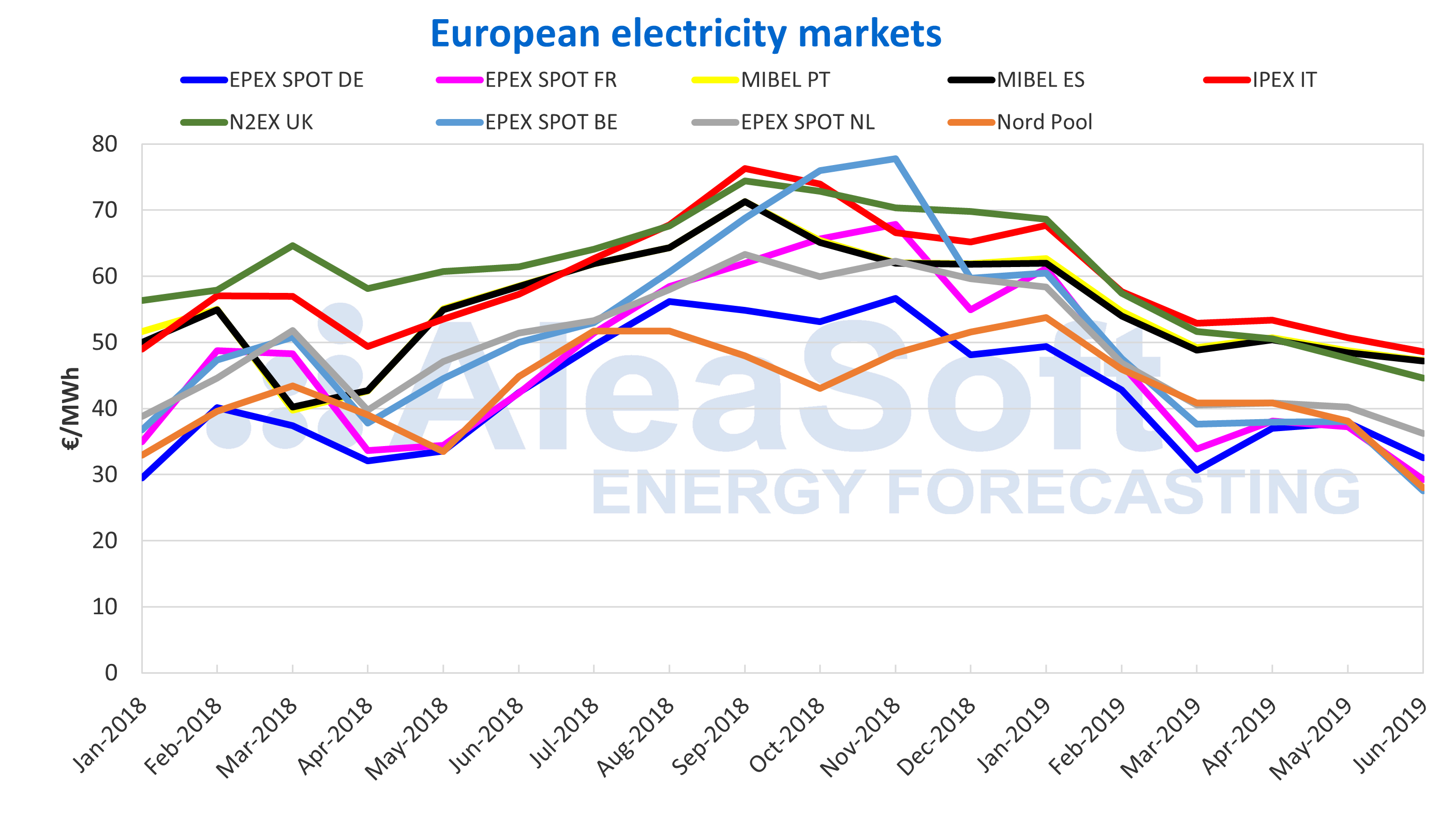 Regarding the price level, the most expensive market during the first half of 2019 was the Italian market with an average price of 55.14 €/MWh. In the group of the markets with the highest prices, during these last six months along with Italy are also Spain, Portugal and Great Britain. About 10 €/MWh below these markets, the group of countries with the lowest market prices can be found, consisting of Germany, France, Belgium, the Netherlands and the Nordic countries. The market with the lowest price on this occasion was the EPEX SPOT of Germany, with an average price of 38.33 €/MWh during the first six months of 2019.

In general, in the first half of this year 2019, the wind and solar non-dispatchable renewable technologies captured price with respect to the average market price has been reduced compared to the captured prices in 2018.

The solar photovoltaic captured price for each of the four quarters of 2018 was above the average market price for Spain, Portugal and France. For each of the first two quarters of 2019, the captured price fell below the average market price in Portugal and France and was clearly reduced for Spain without falling below, with a price factor of a few tenths above 100%. In the case of Germany and Italy, which did score below 100% during the second and third quarters of 2018, in the first two quarters of 2019 the price factor fell below 98%, reaching 88.9% for the second quarter in Germany.

In the case of the solar thermal technology in Spain, the captured price also fell below the average market price during the first quarter of 2019, while during the second quarter the price factor recovered up to 100.4%. 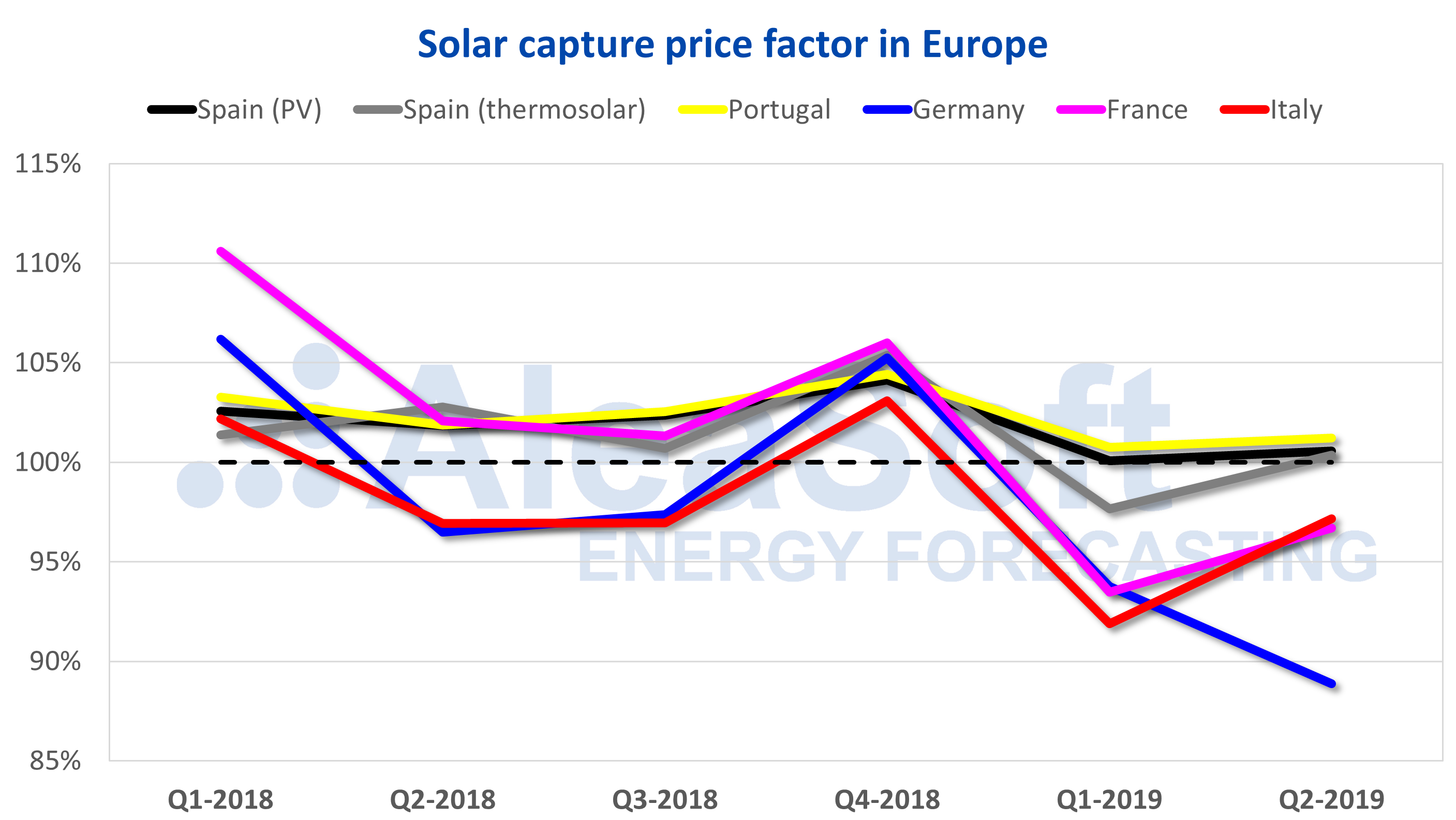 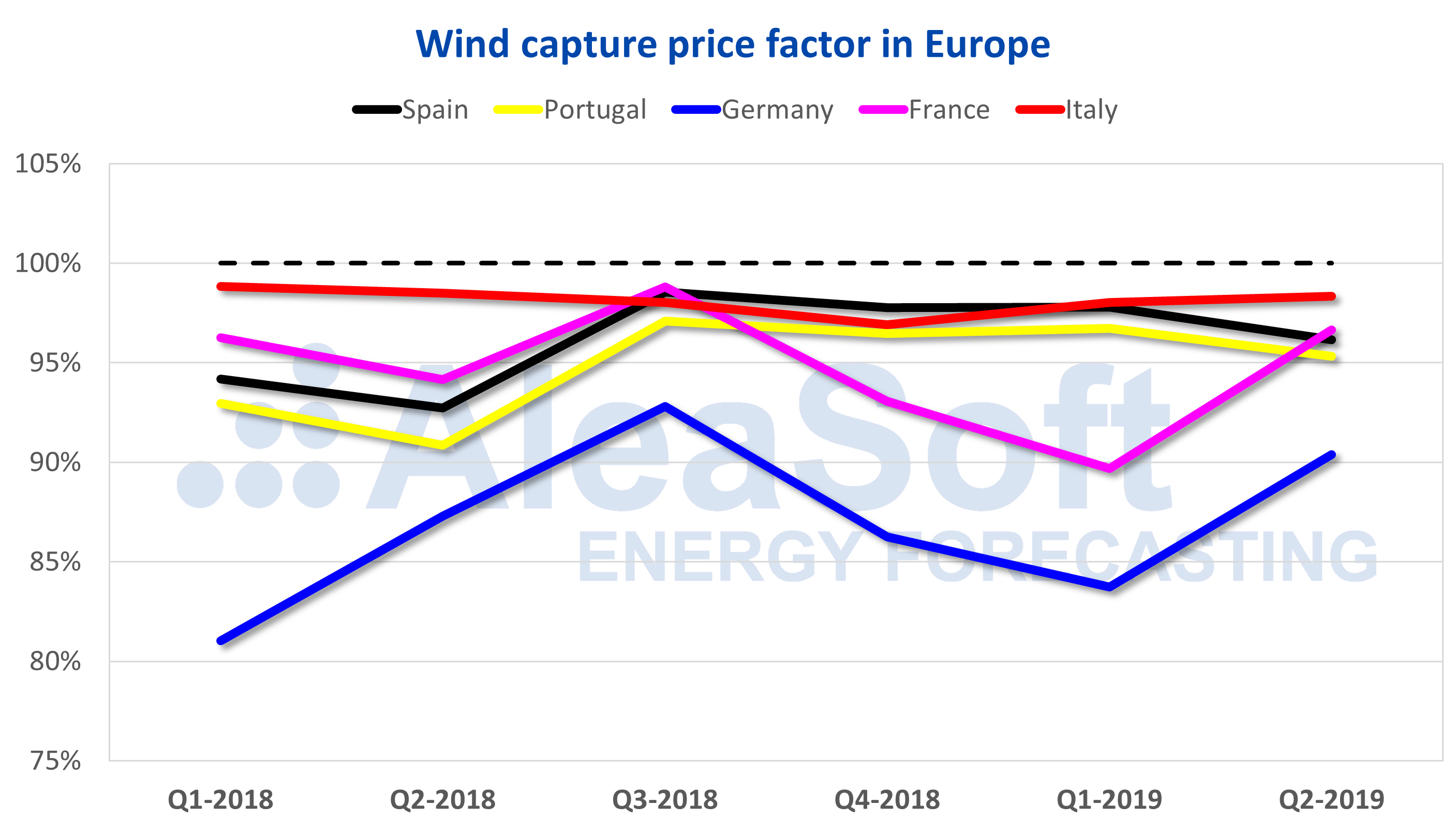 During the first half of 2019, the electricity futures of the main European markets for the year 2020 followed the same downward trend of the spot markets. Dragged by the price drop in gas and coal futures, the electricity futures prices fell by around 4.5% since the first session of the year on January 2. However, the range between the different markets is quite broad: from 8.6% in the Nordic countries to 0.1% for Spain in the EEX market. The exception was the Italian futures in the EEX market which during these six months experienced a 2.1% rise, just the opposite for this product in the MTE market of GME that fell by 2.2%.

During the first half of 2019, the electricity demand of all the analysed European countries decreased compared to the same half of last year. If the second quarter of the year is analysed, the demand for electricity also decreased in most countries, except in France where it rose by 3.9% in year-on-year terms. The average temperatures of the first half of the year were in general similar to those of the same period of 2018, with absolute differences that do not exceed 1 °C. 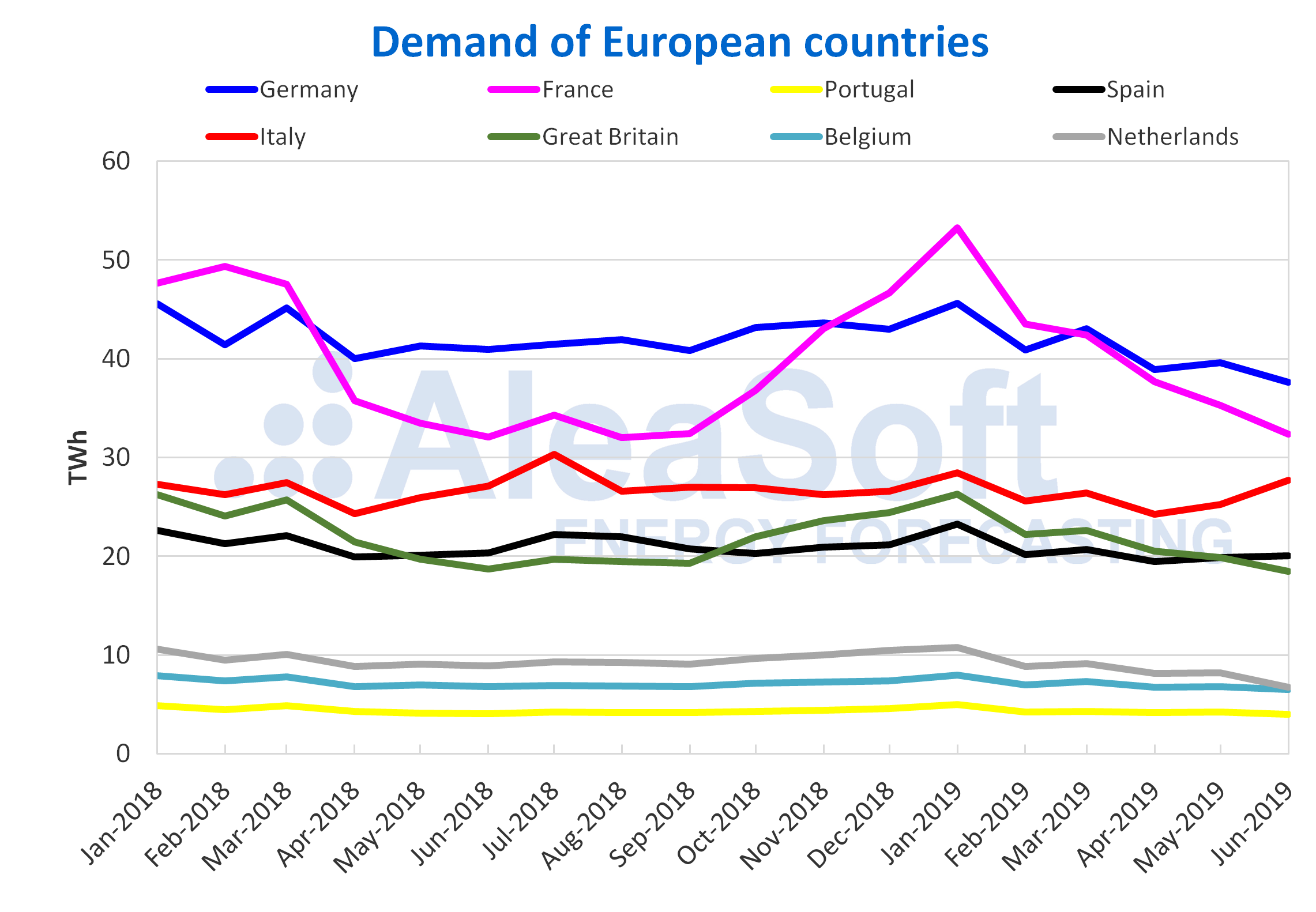 The wind energy production increased in all the analysed European markets for the quarter that just ended in year-on-year terms. In ascending order, the increases were 10%, 17%, 21%, and 27%, in Germany, Italy, the Iberian Peninsula and France, respectively. However, when compared to the first quarter of this year, wind energy production decreased in Germany and Italy by 40%, in France by 30%, in Spain by 15% and in Portugal by 4%.

Making a year-on-year analysis of the half-year that ended on June 30, it is observed that the European wind energy production increased by 12% in France, 16% in Italy and 19% in Germany. On the other hand, there was a decrease in the production in Spain of 3.8% and in Portugal of 7.2%. 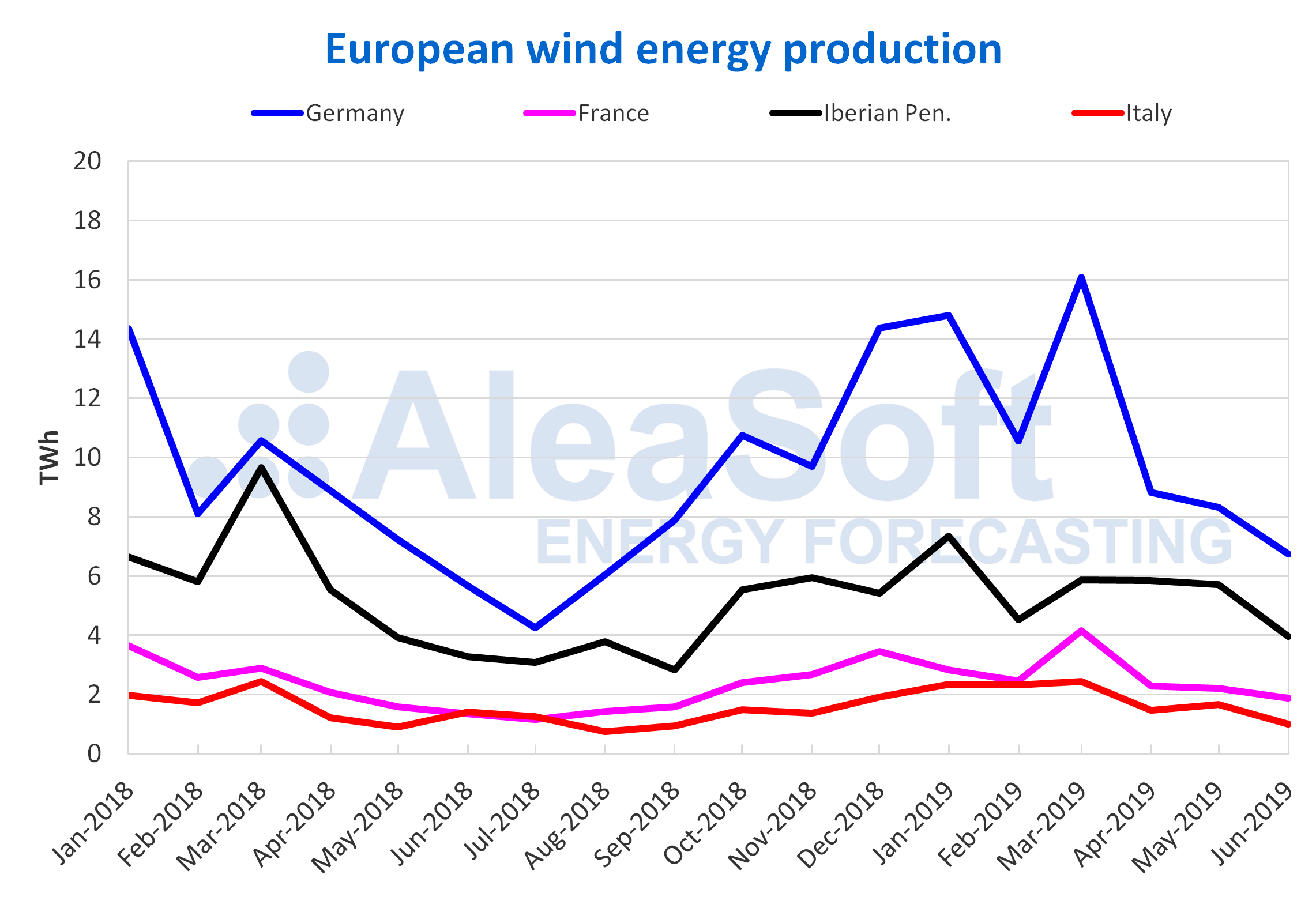 In the case of the solar energy production, which includes both photovoltaic and solar thermal technologies, it increased in year-on-year terms in the last quarter in Germany by 3.6% and in Spain by 22%, while in Italy it decreased by 1.1%. The production of these three countries increased with respect to the previous quarter, with the most significant increase being that of Germany, of 181%. In Spain, the increase was 56% and in Italy 51%.

The solar energy production in the half-year from January to June this year, compared to the same half of the previous year, grew by 7.0% in Germany, 27% in Spain and 13% in Italy. 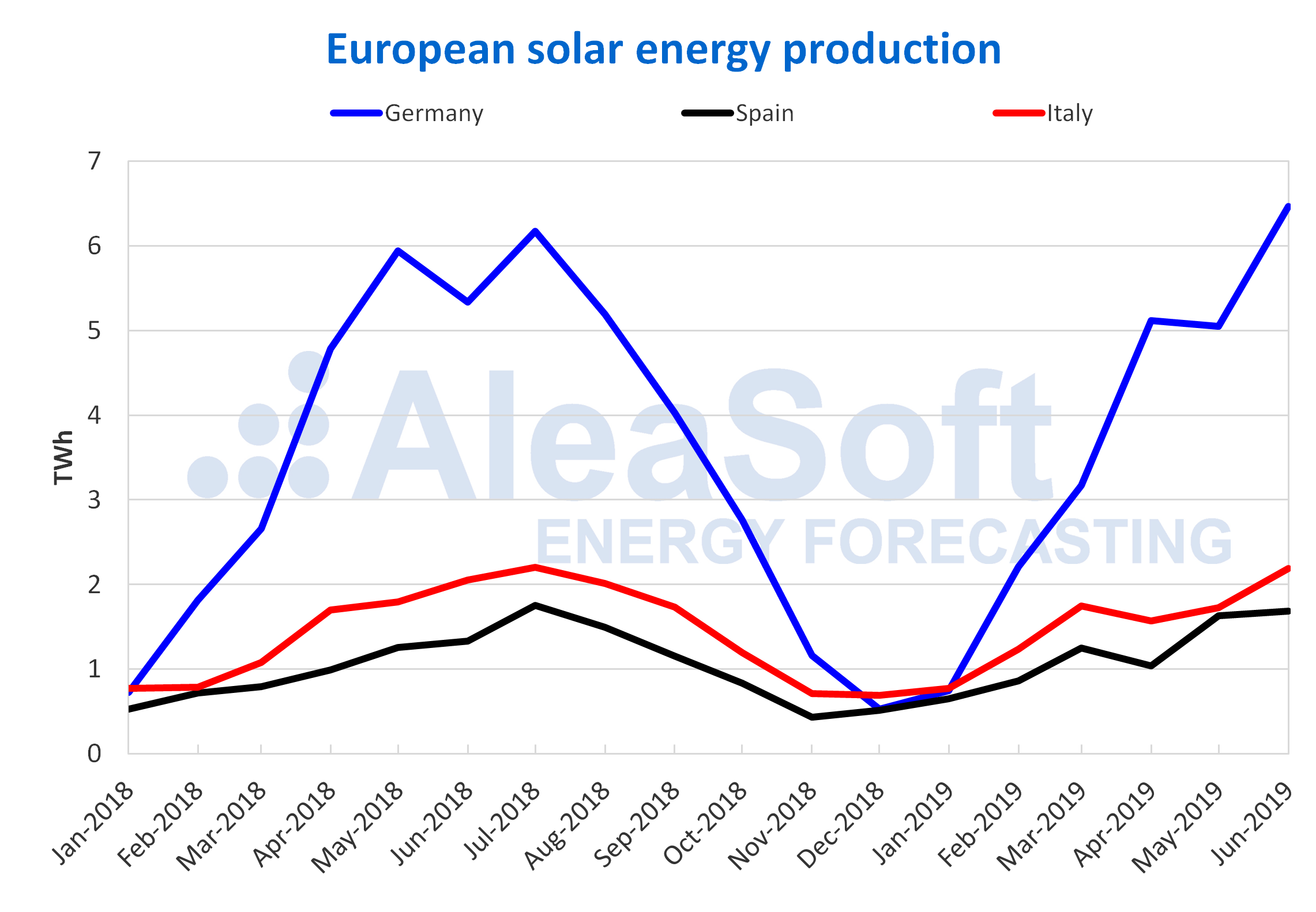