Widespread drop of the European electricity market prices in June

The Brent oil futures prices for the month of September in the ICE market during the first part of June, until the 19th, remained oscillating around 60-61 $/bbl after reached in May values ​​higher than 70 $/bbl. As of June 20, they rose to values ​​around 64-65 $/bbl, settling on Friday, June 28, at 64.74 $/bbl, 7.1% higher than on Monday, June 3. This market has been conditioned by several factors: US sanctions on Iran and Venezuela along with cuts in OPEC production push prices higher, while concerns related to the demand and economic growth due to commercial tensions between the United States and China push prices down. For the next few days the price is expected to rise after United States and China agreed to a truce in the trade war last weekend during a meeting at the G20 summit and the meeting that the OPEC+ countries are holding on July 1 and 2, where everything seems to indicate that they will keep production cuts for six to nine months.

The TTF gas futures in the ICE market for the month of August maintained throughout the month of June a decreasing trend reaching historical minimum values of the last two years, mainly due to the wide supply and low current demand of the market. This trend continued last week settling on Friday, June 28, at 10.12 €/MWh, a value 14% lower than that of the first session in June, on the 3rd.

Prices of API 2 coal futures in the ICE market for the month of August continued to decline throughout the month of June and settled on Friday 28 at 51.85 $/t, 5.3% lower than on Monday, June 3. This market was influenced by the more competitive gas prices and oversupply worldwide.

The CO2 emission rights futures prices in the EEX market for the reference contract of December 2019 showed an upward trend during the month of June. On Friday, June 28, they settled at 26.29 €/t, 11% higher than in the June 3 session. This market was influenced throughout the month by the uncertainties related to the Brexit negotiations and, in the last week of June, by the increase in temperatures, which brings with it an increase in the electricity demand and in turn the electricity production with generation sources that emit CO2. 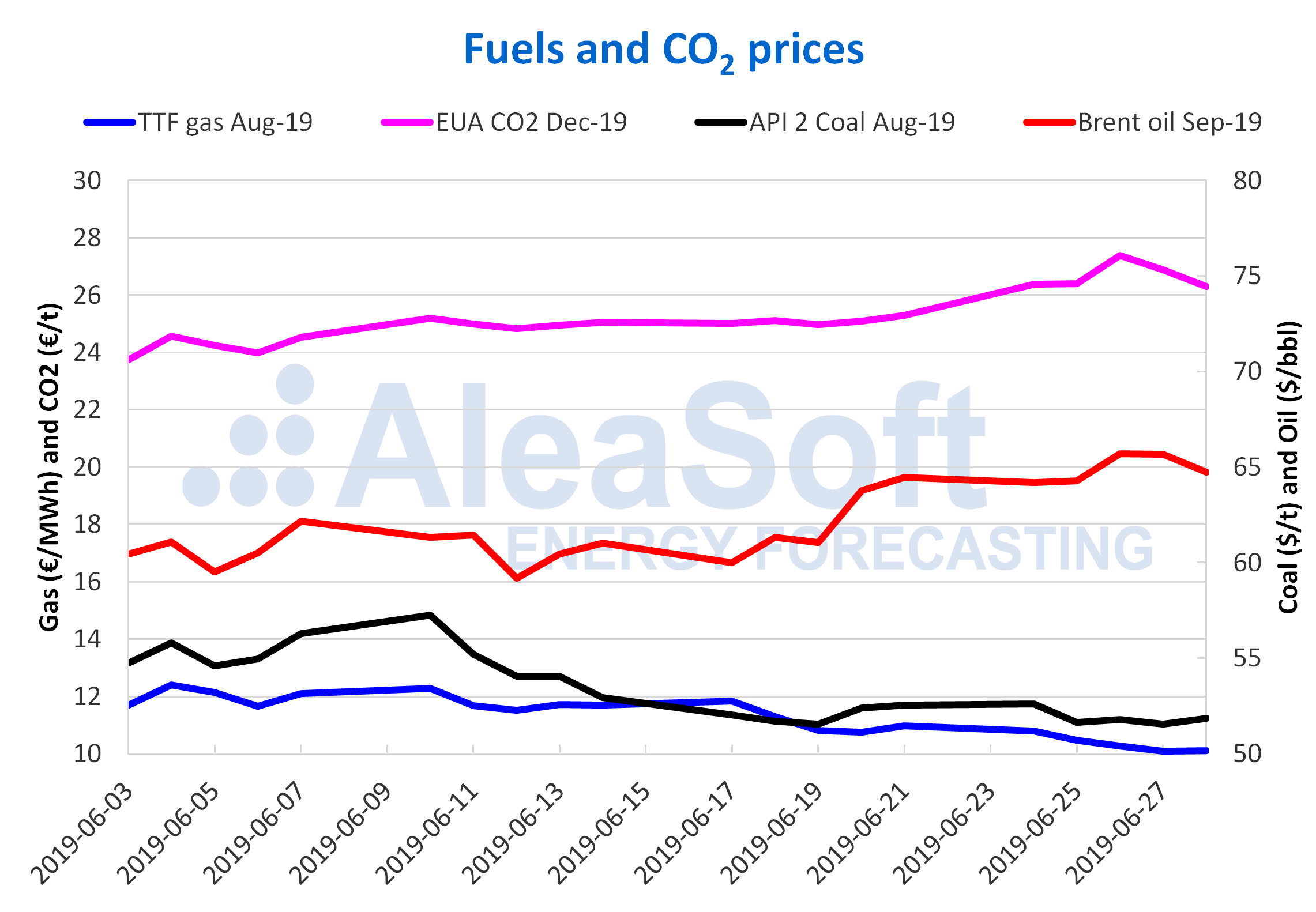 In the just-ended month of June, the European electricity market prices decreased compared to last May and to June of 2018. Focusing in the comparison with June of last year, the EPEX SPOT market of Belgium is the one that fell the most, 45%, and the least IPEX market of Italy, 15%. There are several factors that favoured this decrease in prices: a generalised increase in renewable energy production, mainly wind and solar, compared to that produced in June last year, in addition to the decrease in the prices of the main fuels used for electricity generation. In year-on-year terms, the price of API 2 coal dropped by 46% and that of TTF gas in the spot market by 52%.

In the case of the last week of June, from June 24 to 30, the average price of most of the European markets increased with respect to the previous week, with the MIBEL market of Spain and Portugal with the highest growth of 5.7%. However, in the EPEX SPOT markets of Germany and the Netherlands, and in the Nord Pool market of the Nordic countries, the price fell by 4.7%, 3.3% and 1.6% respectively. Last week Europe was affected by a heat wave that increased the electricity demand of the continent causing prices to rise. However, the high renewable energy production contained the prices and favoured the decrease of the prices of the aforementioned markets. Even this high renewable energy production favoured that on Sunday, June 30, a day of lower electricity demand being a not-working day, the price reached negative values ​​between hours 14 and 16 in the EPEX SPOT markets of Germany, France, Switzerland and Austria, plus in one of the bidding areas of Denmark in the Nord Pool market. 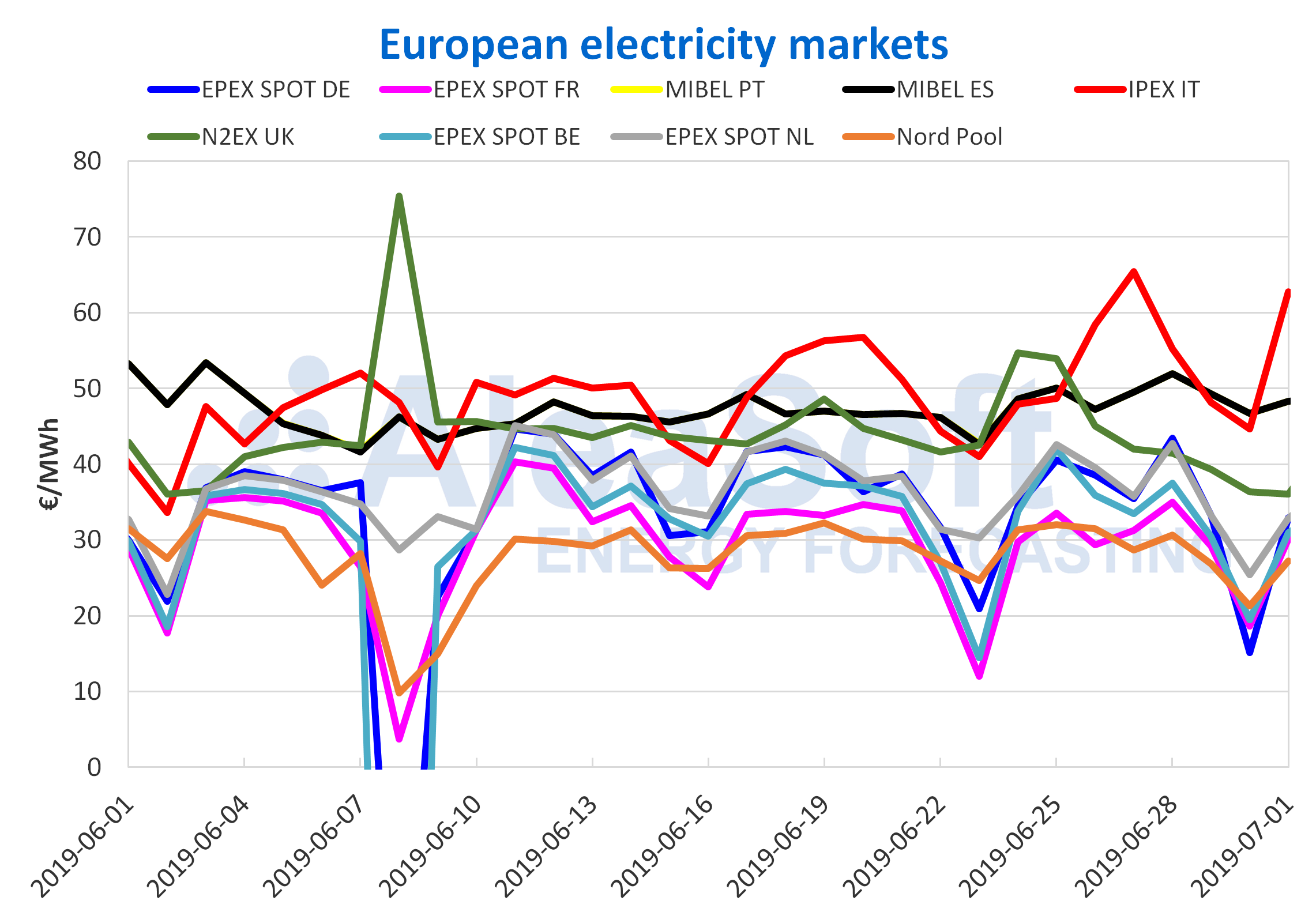 During the month of June there was a generalised decrease in the price of European electricity futures for the fourth quarter of 2019, except for the German futures in the EEX market which remained practically unchanged between the beginning and the end of the month. The most important decreases were recorded for the Nordic futures in the ICE and NASDAQ markets, for which the decrease was 5.9% and 6.2% respectively. For the rest of the markets, prices fell between 0.7% and 3.3% between June 3 and 28.

However, in the case of the European electricity futures for the year 2020 there was a generalised rise during the month of June, with the exception of the Italian futures in the MTE market operated by GME, which ended the month of June with a price a little lower than in the first session of the same month. The highlights are the futures of the Nordic countries in the ICE and NASDAQ markets, the futures of Belgium and the Netherlands in the ICE market, as well as the futures of France, Germany and Italy in the EEX market that ended the month with increases equal to or greater than 4%. The rest of the markets increased between 1.7% and 2.1%.

During the past week, Europe experienced a heat wave that caused average temperatures to increase throughout the continent around 3 °C compared to the previous week, with France standing out with an increase of 5 °C. This caused that the electricity demand increased considerably, with Spain in the lead with a growth of 7.7%. However, in Great Britain, the electricity demand fell by 0.8% in this period. 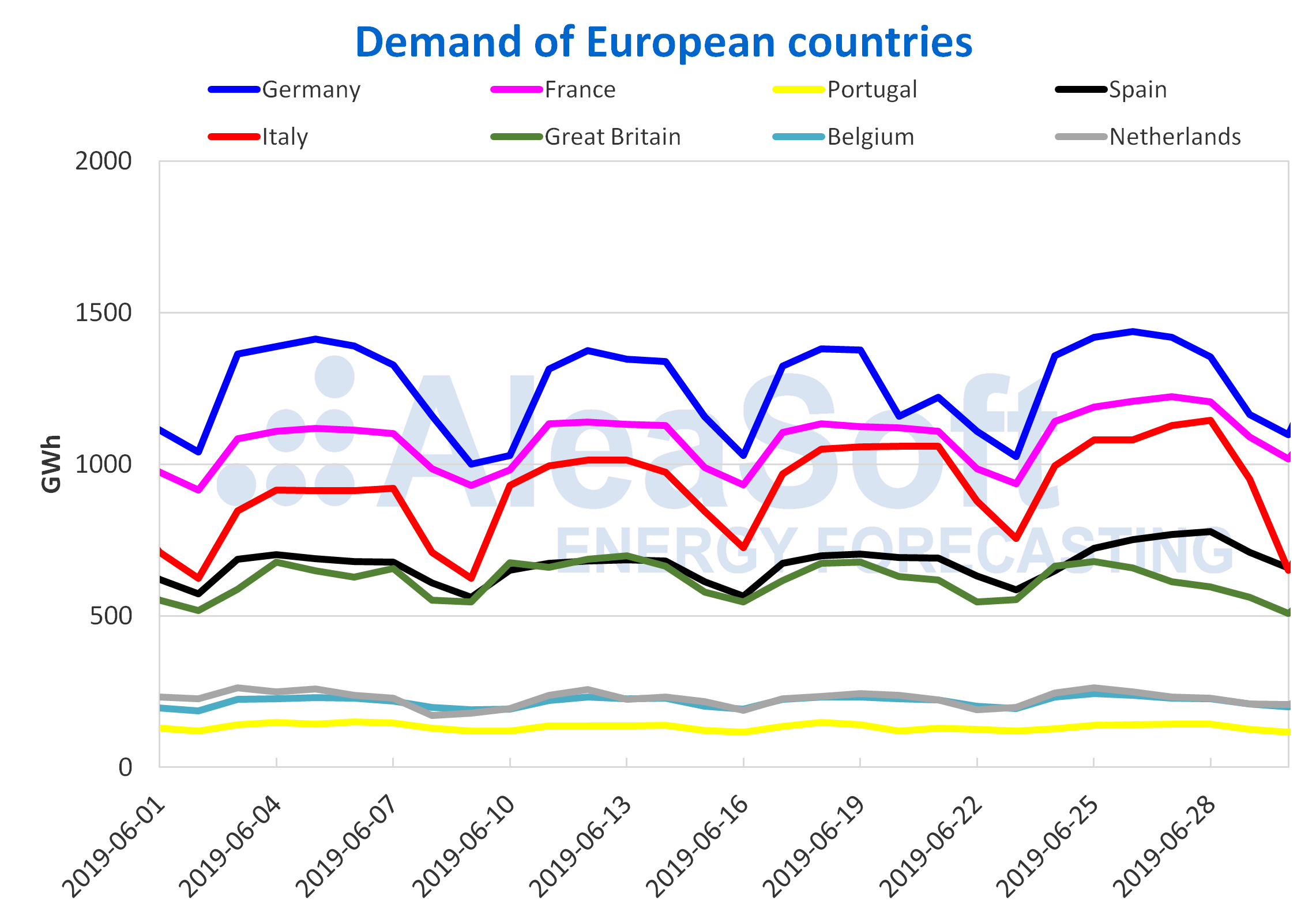 On a monthly basis, however, the electricity demand in the analysed European countries fell in year-on-year terms, with the exception of France and Italy.

In the last week of June, wind energy production increased in a large part of Europe except in Portugal, where it fell by 52%. In Italy it had a significant increase of 135%, while in Germany, France and Spain it was 78%, 47% and 3.6% respectively. For this week, an increase in wind energy production is expected in Germany, Portugal and Spain and a decrease in France and Italy.

Comparing the wind energy production of the recently completed month of June with the month of May, there is a general decline in most of the European countries. However, compared to June of last year there was an increase in generation with this renewable energy in Germany of 19%, in France of 38%, in Portugal of 14% and in Spain of 24%, while in Italy registered a fall of 29%. 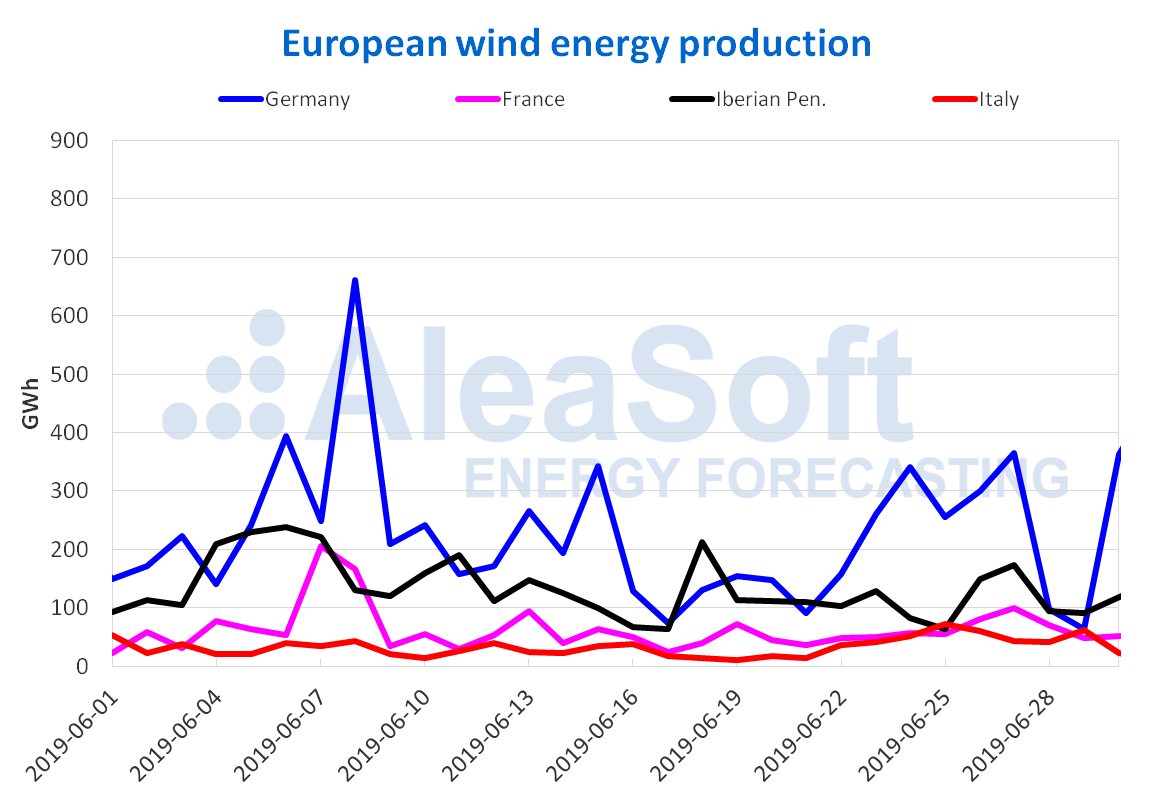 Taking into account the last seven days of last June, solar energy production, which includes both photovoltaic and solar thermal technologies, increased by 18% in Germany compared to the previous week and by 5.6% in Italy. In Spain there was a decrease of 0.6% compared to the days of June 17 to 23. For this week, solar energy production is expected to decrease slightly in Germany, and maintain values similar to those of last week in Spain and Italy.

Analysing the solar energy production during the month of June with respect to the previous month, it is observed that the increase in Germany was of 32%, in Spain of 7% and in Italy of 31%. Comparing with respect to June of 2018, both in Germany and Spain there was a growth of 21%, and the year-on-year increase in Italy was 7%. 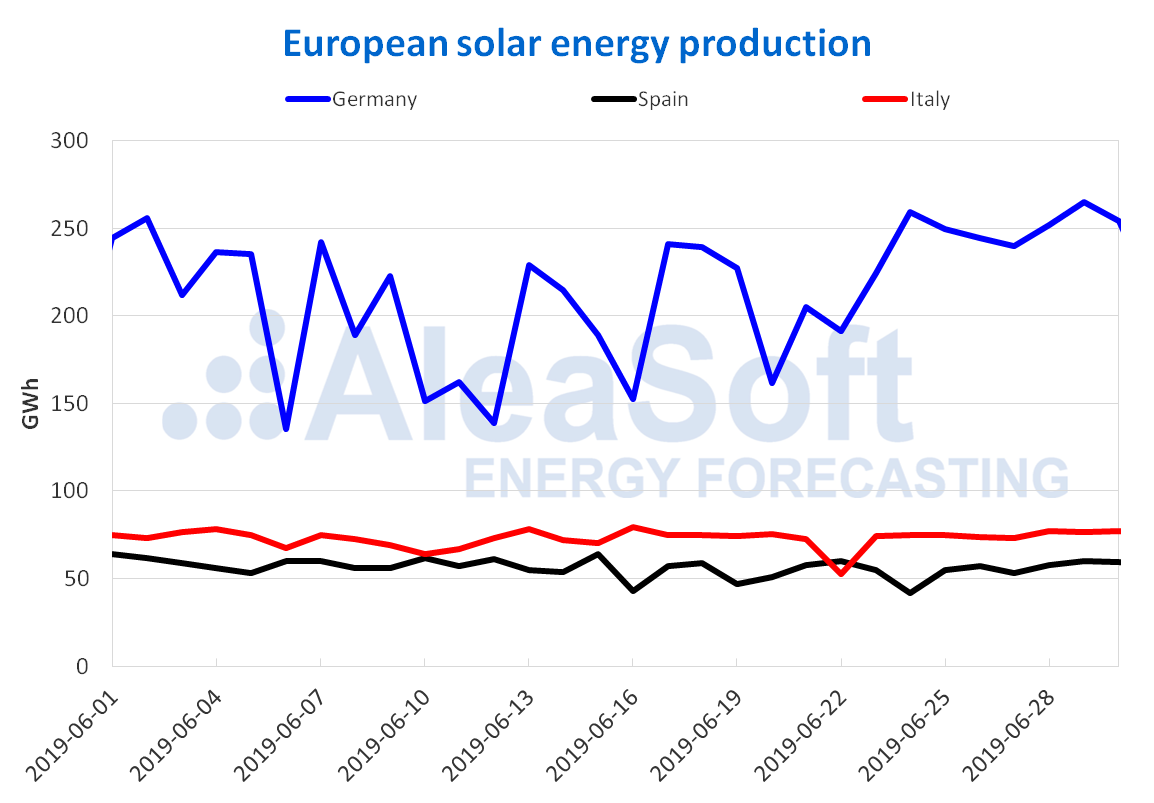 PrevAnteriorMIBEL does not resist the high temperatures, most of Europe is saved by renewable energies
SiguientePrices down in 2019 due to the fall of gas and coal and the increase of renewable energiesNext
Menu
Facebook-f Twitter Linkedin Instagram