AleaSoft, October 31, 2019. The solar energy production during the first three days of this week in Germany, Spain and Italy was lower than last week. The decline in renewable energy production in the European continent, both wind and solar energy, led to an increase in prices in most markets. Meanwhile, in the futures markets of Brent, gas and coal the predominant behaviour was downward, and in the CO2 market it was upward.

So far this week, the solar energy production fell in Spain, Germany and Italy compared to the average level of last week. The variation in Germany was only ‑4.0%, while in Italy it was more significant, registering a decrease of 26%. The averages recorded in these first three days in Germany, Spain and Italy, were 70 GWh, 25 GWh and 21 GWh respectively, approaching them to the weekly average at the end of January and to the seasonal levels of this stage of the year.

With only one day left to count all the data for October, so far this month a greater solar energy production was achieved in year‑on‑year terms, with values of 29% and 13% for Spain and Italy, respectively. On the contrary, in Germany there was 13% less generation with this renewable source in the same period. 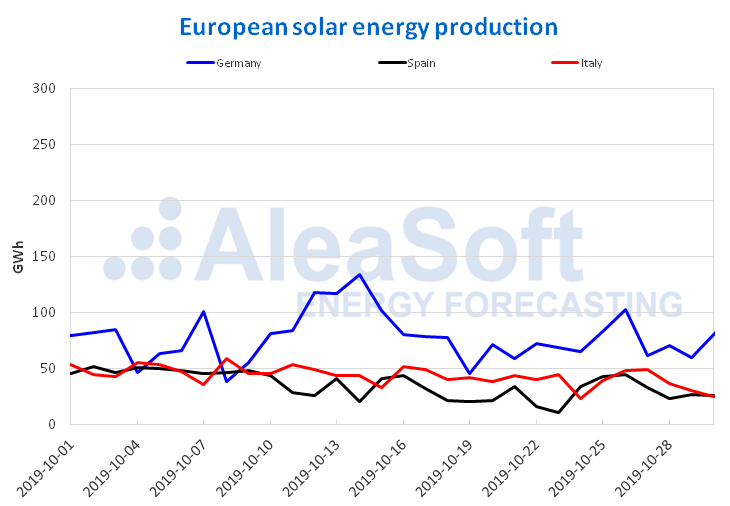 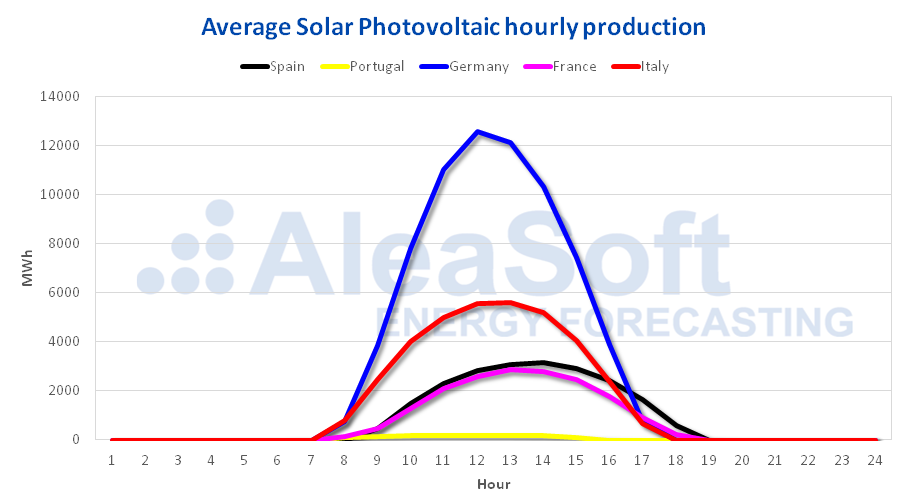 In the case of the wind energy production, there were also significant declines in the analysed countries during the first three days of this week, compared to the average values of last week. Among the significant decreases is that of Germany, which fell by 53%, followed by Italy and France, with 35% and 31% respectively.

Analysing the behaviour from October 1 to 30, 2018 and 2019, France and Germany increased their wind energy production by 38% and 8.9%, respectively. For the rest of the analysed countries, the results of this comparison show decreases between 12% and 16%. 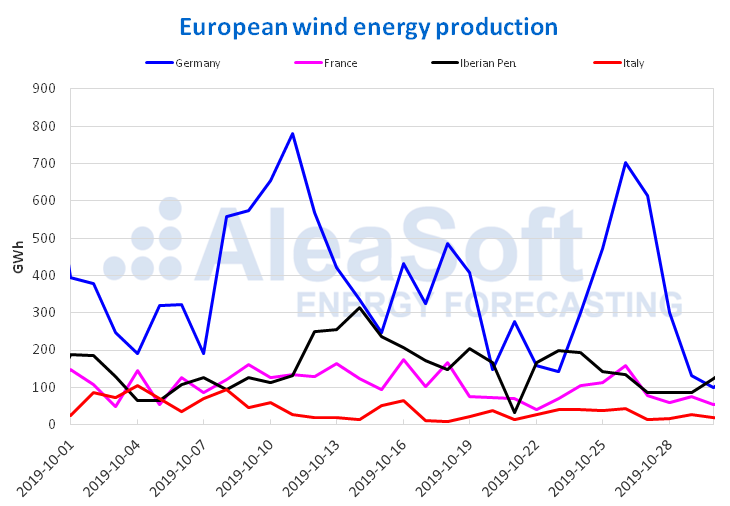 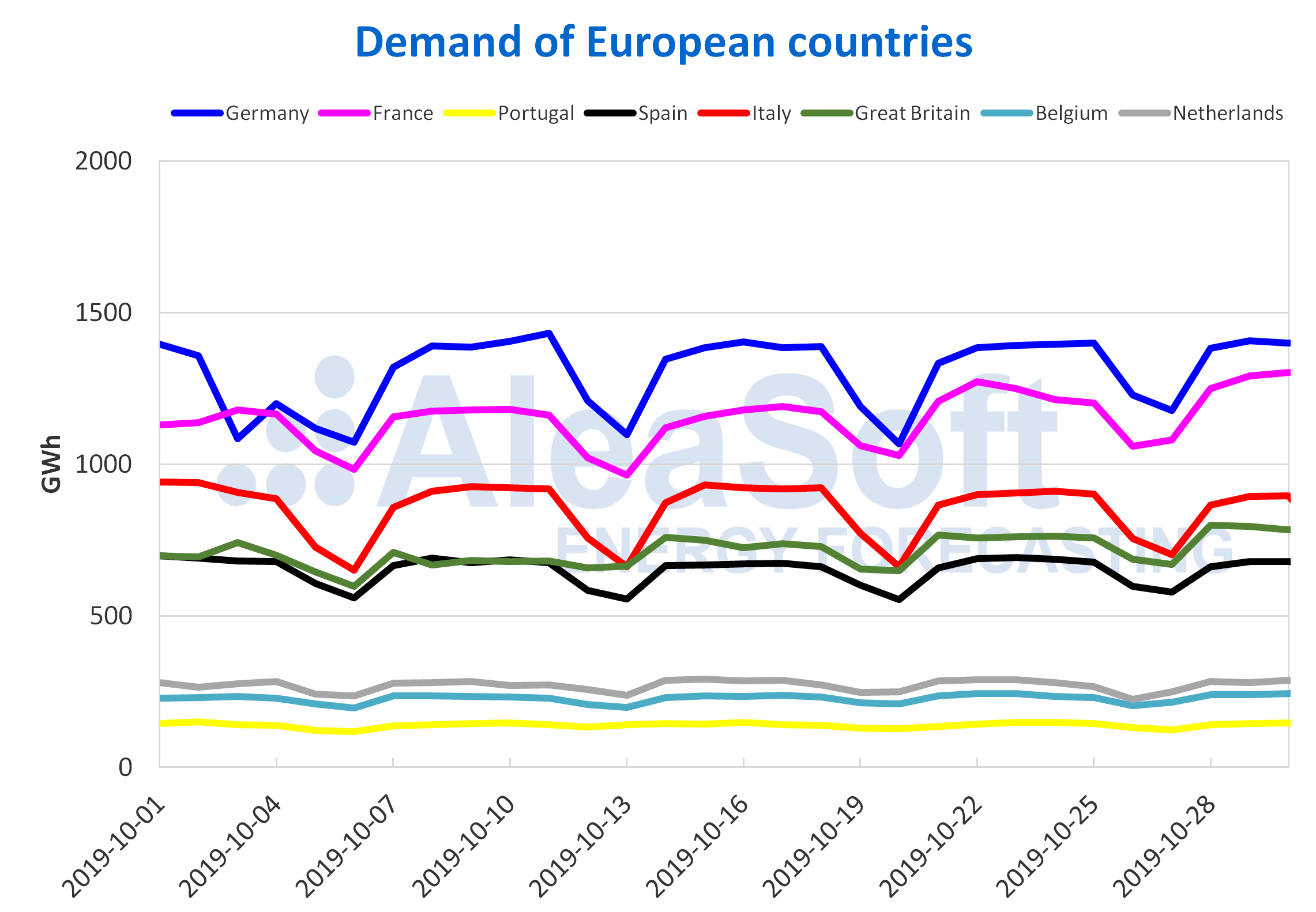 The average wind energy production so far this week continued to decline in Spain, falling by 28% and significantly affecting the total of October, which with data up to October 30 is 16% lower than what was registered in the same period of 2018.

The average temperatures in Spain this week were higher than last week’s average, with a difference of 3 °C. Consequently, the electricity demand decreased during the first three days of this week by 1.0% compared to the same period of last week. According to the analysis carried out at AleaSoft, at the end of the week the total demand will be lower than last week, since the effect of the national holiday of All Saints must be added to the effect of the temperatures. 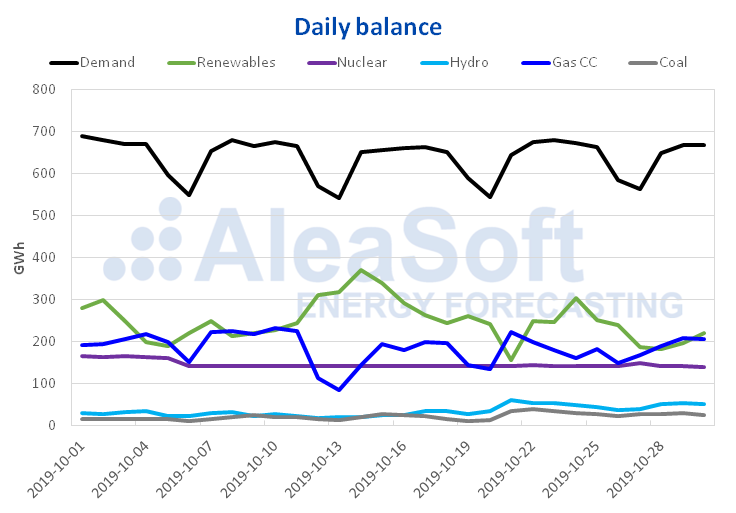 Currently, the level of the hydroelectric reserves is 7830 GWh, which represents an increase of 2.7% over the previous week. This available energy is 34% of the total capacity, according to data from the latest Hydrological Bulletin of the Ministry for Ecological Transition.

So far this week the average price of most European electricity markets increased compared to the previous week, with the exception of the IPEX market of Italy, which this week experienced a more moderate decrease, of ‑0.9%, after presenting a 19% cross‑weekly fall last week. The rest of the analysed markets increased between 3.8% corresponding to the EPEX SPOT market of the Netherlands and 9.0% of the EPEX SPOT market of France. The low wind energy production as well as the decrease in the temperatures that led to an increase in electricity demand in most of Europe led to this rise in electricity prices. 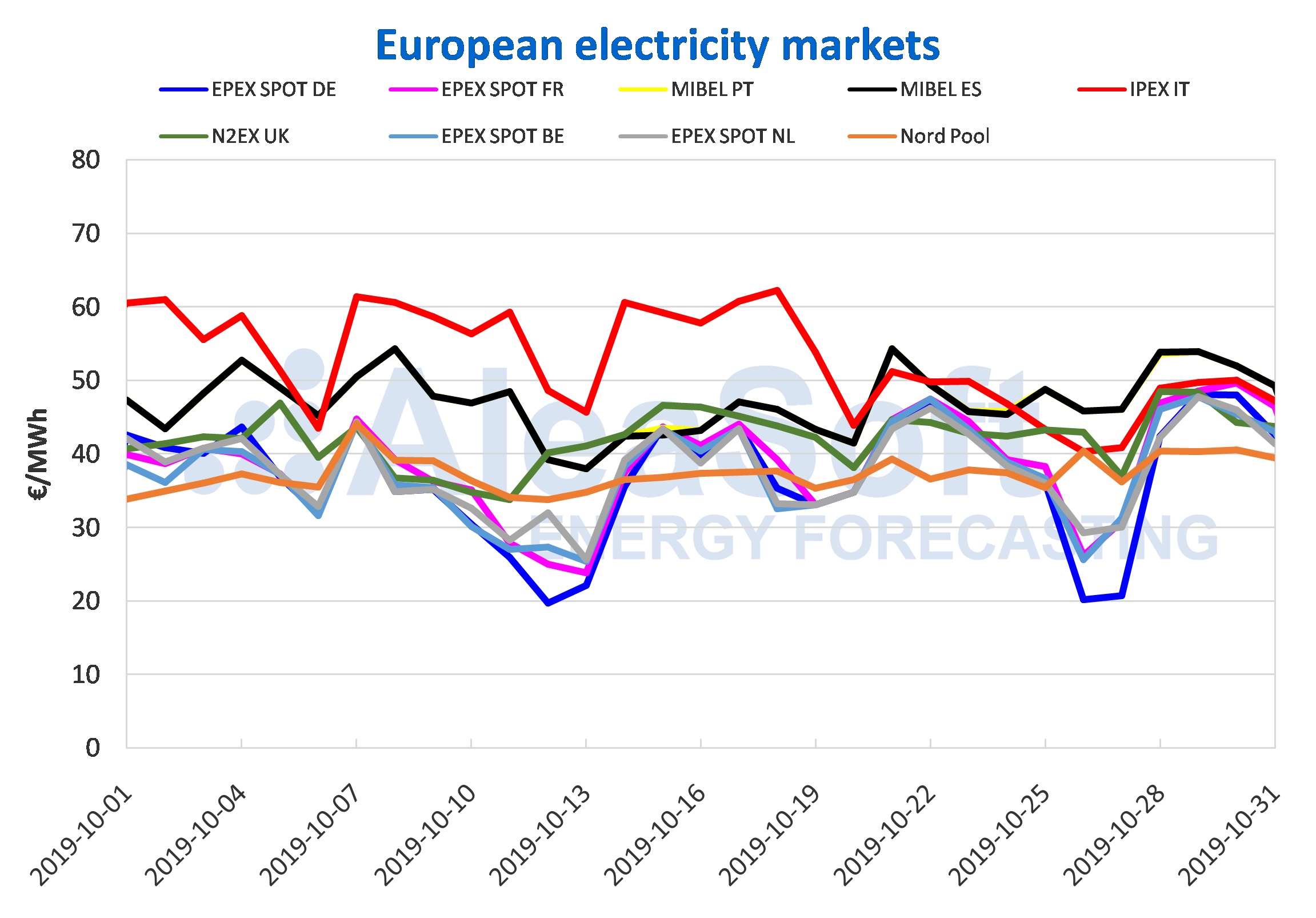 Since Friday, October 25, the daily average prices of the MIBEL market for both countries positioned themselves as those with the highest price in Europe, being higher than those of the IPEX market of Italy by between €1.89/MWh and €5.57/MWh. This increase in prices was conditioned by the low wind and solar energy production of these last days.

In this month of October, the MIBEL market of Portugal and Spain settled with a monthly average price of €47.21/MWh and €47.17/MWh, respectively, positioning themselves as the second and the third with the highest prices of the analysed European electricity markets.

The electricity futures of many of the analysed European markets, both for the next quarter and year, generally continued the downward trend that they were showing in some cases since mid-October. Although the last two days, on October 29 and 30, there were increases in some markets, the prices on October 30 were lower than those on Friday, October 25. However, the electricity futures of the Nordic countries in the ICE and Nasdaq markets do not have the same decreasing trend of the other markets for the two analysed products and, except for the futures of the first quarter of 2020 in the Nasdaq market, that in yesterday’s session fell by 0.6% compared to Friday, in the other cases the prices rose up to 1.0% of the futures for the year 2020 in the ICE market.

When focusing the analysis on the futures of Spain and Portugal, in the OMIP market the settling price of the two products in yesterday’s session was 0.6% below Friday. In the case of Spain’s futures in the EEX market, the declines were 0.8% for Q1‑20 and 0.7% for Cal‑20.

The prices of Brent oil futures for the month of December in the ICE market, after last Friday they reached the maximum value so far this month of $62.02/bbl, this week were a bit lower and with a downward trend. As a result of this behaviour, on Wednesday, October 30, the settling price was $60.61/bbl, 0.9% lower than the one of the Wednesday of the previous week. This is related to the pace of production in the United States and the levels of its crude oil reserves. A rise in oil reserves worldwide could cause a decrease in prices. However, it is expected that at the OPEC+ meeting scheduled for the month of December they will agree to keep production cuts that prevent it.

The TTF gas futures prices in the ICE market for the month of November began the week continuing with the downward trend of last week. On Monday and Tuesday of this week they experienced daily decreases of 4.5% and 4.8%, respectively. However, on Wednesday, October 30, the same settling price that on Tuesday was reached, of €13.85/MWh.

The API 2 coal futures prices in the ICE market for the month of November this week remained stable. After a 1.5% decrease occurred on Monday compared to the price of Friday, October 25, this week the prices ranged between $56.20/t of Wednesday, October 30, and $56.70/t of Tuesday, October 29.

At the beginning of November, the temperatures are expected to fall, which could lead to increases in the prices of TTF gas and API 2 coal futures. But, an increase in wind energy production could counteract the effect of the temperature and the prices, both of gas and coal, could fall again next week. 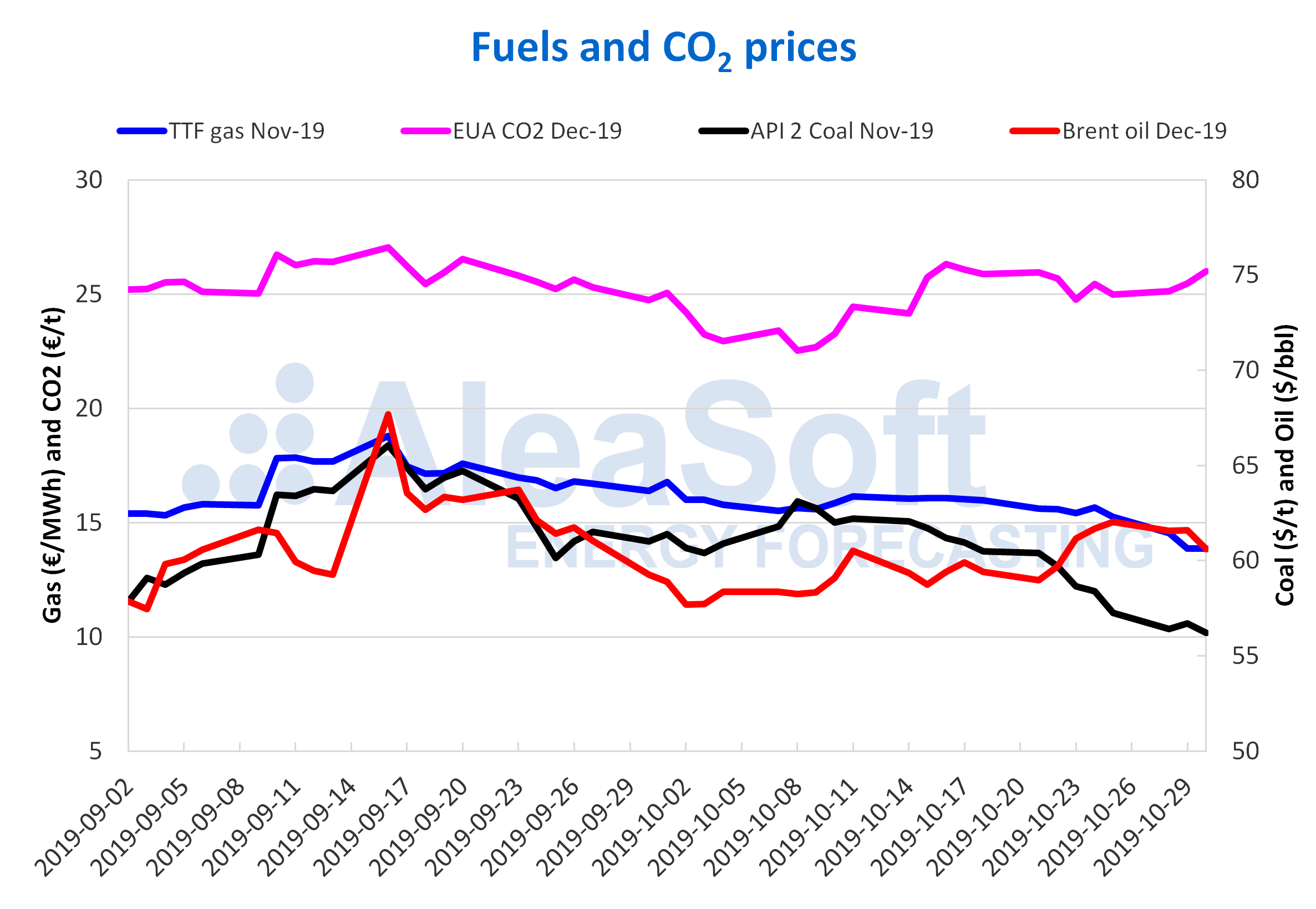