The prices of the European electricity markets increase this week

AleaSoft, September 19, 2019. The prices of the main European electricity markets have increased so far this week compared to the same days of last week. According to AleaSoft’s analysis, this increase is due to the rise in the price of fuels, the concerns arisen about the possibility of closing some French nuclear power plants and the decrease in renewable energy production in most of the countries analysed, except in Germany and France where the wind energy production rose.

The prices of the MIBEL market in Spain and Portugal earlier this week increased considerably compared to the same period of the previous week. The average price of the first four days elapsed in the current week was €49.81/MWh for both countries, the second highest among the European markets analysed. According to the analysis carried out in AleaSoft, these prices, which represent an increase of 32% over the same period last week, have been justified by the considerable decrease in productions with wind and solar renewable energy, together with the increase in electricity demand and the fuel prices used for electricity generation.

The EPEX SPOT markets in Germany, France, Belgium and the Netherlands have also experienced an increase in their prices so far this week compared to the same period of the previous week. The German market was the one with the lowest growth, of 4.7%, compared to the same period last week, settling with an average of €40.32/MWh for the first four days of this week, between the Monday, September 16, and Thursday, September 19. Of the group of countries analysed corresponding to the EPEX SPOT market, France was the one with the highest growth, with an increase of 16% and an average price of €42.91/MWh, followed by Belgium and the Netherlands, which increased 12% and 6.2%, with prices of €41.40/MWh and €40.64/MWh, respectively. The IPEX market in Italy has increased by 16% this week and continues to be the one with the highest price in the markets analysed, with an average of €55.92/MWh. The British N2EX market, which has increased by 17%, settled with the third highest price so far this week, of €47.98/MWh. On the other hand, the price of the Nord Pool market has been the only one that has averaged down compared to last week, decreasing by ‑1.2% and the price of €33.28/MWh being the lowest of all European markets analysed.

As in MIBEL, the increase in the average of the prices of the rest of European markets, for the first four days of this week, was caused by the decrease of wind and solar energy productions in a large part of the countries analysed by AleaSoft, in addition to the rising prices of fuels used in power generation.

The price of Brent oil futures for the month of November in the ICE market experienced a marked rise on Monday, September 16, settling at $69.02/bbl, a value of $8.8/bbl higher than the settling price of Friday, September 13. However, on Tuesday, September 17, the rise was not maintained, but the price fell again until it was only 3.5% above the value reached on Tuesday of the previous week, continuing with this trend on Wednesday, when the price was $63.60/bbl. The perceived increase in the price of Monday, September 16, was related to the attacks perpetrated at oil facilities in Saudi Arabia during the previous weekend. However, the increase in the production by the United States and the statements of the Minister of Energy of Saudi Arabia, regarding the early restoration of the production levels, contributed to the change in trend observed in subsequent days.

The price of TTF gas futures in the ICE market for the month of October began the week of September 16 with the same upward trend experienced during the previous week. A value of €15.33/MWh was reached on Monday, 25% higher than last week’s Monday. But, on Tuesday, September 17, the price of TTF gas futures fell to €13.44/MWh, which represents a ‑12% drop compared to the previous day’s price. The decline continued on Wednesday, September 18, until a price of €12.43/MWh, ‑13% lower than the same day of last week. The change in trend experienced on Tuesday was influenced by the fall in oil prices and in turn was reinforced by EDF’s statements that, for the moment, this winter it would not be necessary to make stops for the French nuclear power plants in which defects were detected in the welds of some of their reactors.

On Monday, September 16, the price of API 2 coal futures in the ICE market for the month of October reached a value of $64.70/t, the highest price reached in September. This Tuesday, that value fell ‑2.2% to $63.30/t, still above the maximum value reached the previous week, of $62.85/t, corresponding to Thursday, September 12. The decline continued Wednesday until $62.15/t, ‑0.6% lower than last week’s Wednesday. The downward trend of the last two days was also influenced by the dissipation of fears of the need for stops at the French nuclear power plants.

The prices of the CO2 emission rights futures in the EEX market for the December 2019 reference contract began this week with an increase in prices, to subsequently start a decline on Tuesday. Thus, on Monday, September 16, a price of €27.04/t was reached, 8.1% higher than the Monday of the previous week. On the other hand, on Tuesday, September 17, the price decreased by ‑3.1% compared to the previous day, reaching a value of €26.21/t. This fall in prices continued yesterday, reaching a price of €25.45/t, ‑3.1% lower than that of Wednesday of last week.

The prices of Spain’s electricity futures for the fourth quarter of 2019 in the EEX market settled on Wednesday, September 18, 5.7% lower than the previous day, reaching €55.25/MWh, but remaining above the average recorded the week of Monday, September 2. This occurs after the sharp rise recorded last week and having started this week on the rise, settling on Monday, September 16, with an increase of 2.0% over the previous Friday. Similarly, futures in Spain and Portugal for the same period in the OMIP market fell 4.3% in yesterday’s session, after increasing by 1.8% on Monday compared to Friday, September 13.

The futures of France and Germany in the EEX market for the next quarter and for the next year also registered falls this week. On Wednesday, the futures prices for the fourth quarter of 2019 settled 8.0% and 4.4% lower than the previous day for France and Germany, respectively. In general, so far this week, the prices of European futures have fallen in the midst of decreasing concerns about a future decline in French nuclear energy production, which during the past week triggered market prices.

The total electricity demand of Mainland Spain in the period from Monday to Wednesday of this week of September 16 increased by 3.0% compared to the same period of the previous week. According to the calculations made by AleaSoft, once the effect of the September 11 holiday has been corrected, the increase was 1.4%. Similarly, records of total electricity demand increased in the same range of days in Germany, Italy, Great Britain and the Netherlands.

The wind energy production in Spain from Monday, September 16, until yesterday, Wednesday, September 18, fell by about 80% compared to the average of the previous week. Also the falls in the energy productions with this technology in Portugal and Italy stand out, reaching ‑75% in Portugal and ‑55% in Italy. On the other hand, Germany and France continued the upward trend that has been observed since last week, with an increase in generation of 51% and 77% respectively, compared to the previous week. AleaSoft analyses indicate that next week the energy production should fall in Germany, while an increase is expected for the rest of the countries, mainly in Spain and Portugal.

The nuclear power plants in Spain continue this week with stable operation. At the moment, there are no scheduled nuclear stops so this stability must be maintained in the coming weeks.

The hydroelectric energy production in Spain increased 31% from Monday to Wednesday of this week compared to the same period last week. 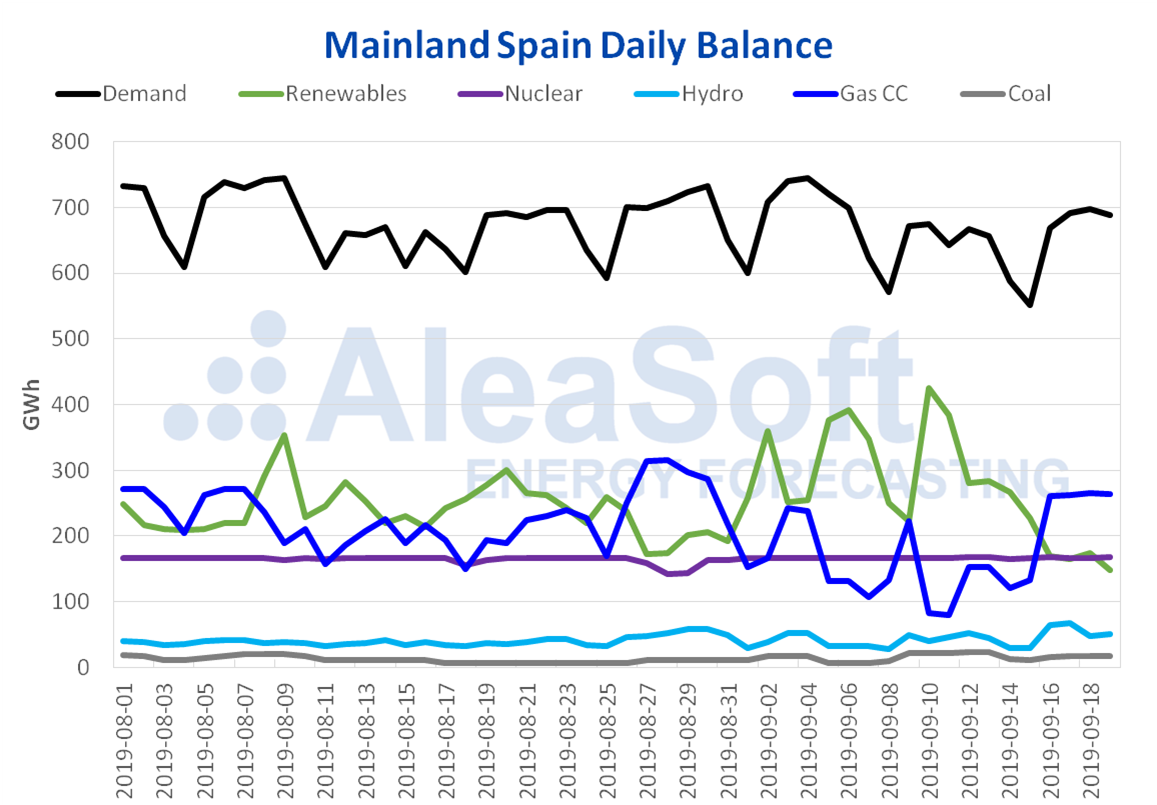