The prices of the main European electricity markets continue upwards

AleaSoft, September 23, 2019. AleaSoft analyses the prices in the fuel markets, CO2 emission rights, European electricity markets and renewable energy production in the week of September 16, in which the prices of the electricity markets continued to rise. According to the analysis, the increase in the price of fuels, the concerns about the possible stops of some French nuclear power plants and the decline in renewable energy production in several countries are behind this rise.

The Brent oil futures for the month of November in the ICE market started last week with a price of $69.02/bbl on Monday, September 16, being 10% higher than the price on Monday of the previous week. However, the prices fell by ‑6.5% on Tuesday to $64.55/bbl. The rest of the week, the prices remained more stable, ranging between $63.60/bbl and $64.40/bbl. Although the increase in production by the United States and the statements about the prompt restoration of the production levels in Saudi Arabia contributed to price stabilization, these were above the maximum value reached the previous week, $62.59/bbl, corresponding to Monday, September 9.

The prices of TTF gas futures in the ICE market for the month of October, after the increases of the week of September 9, experienced a downward trend throughout most of last week. The weekly minimum was reached on Thursday, September 19, when the price was €12.26/MWh, ‑15% lower than the price reached the previous Thursday. On Friday, September 20, this trend was reversed with a slight rise to €12.71/MWh, after that on Thursday, in the negotiations on the supply of gas held in Brussels, no agreement was reached between Russia and Ukraine.

After the marked downward trend experienced during the first days of last week, the price of API 2 coal futures in the ICE market for the month of October began a slow recovery on Thursday, September 19. At the end of the week, the price reached was $62.90/t, 0.6% higher than the settling price of the previous Friday and $0.75/t above the minimum price of that week, reached on Wednesday, September 18. 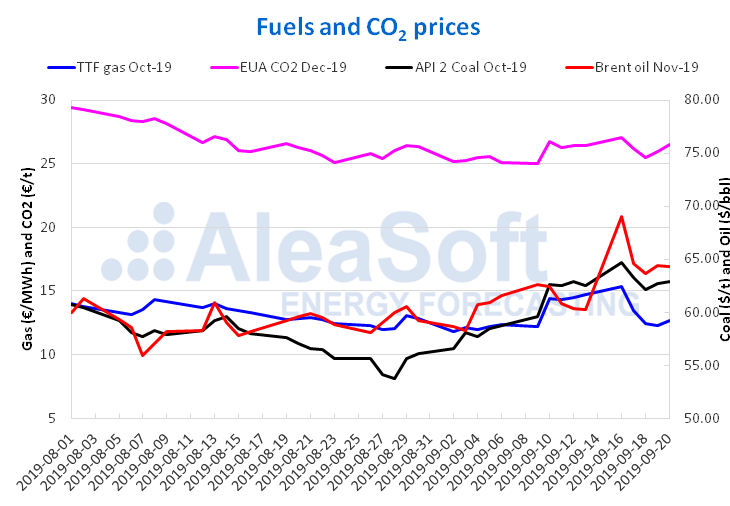 The prices of the main European electricity markets analysed increased during the week that ended recently with respect to the week of September 16. The MIBEL market in Spain and Portugal, with an increase of 23% in relation to the average of the previous week, registered the largest increase in prices during the week. The Italian IPEX market was the second with the highest price growth, increasing by 11%. On the other hand, the EPEX SPOT markets in Belgium and the Netherlands increased around 2.0%, with the markets having the lowest growth in average prices last week. The rest of the markets analysed, the EPEX SPOT of Germany and France, the British N2EX and the Nord Pool registered increases in the range of 5.2% to 7.2%.

According to AleaSoft, the rise in prices of European electricity markets during the past week was favoured by the increase in the price of fuels used for power generation, the concerns about the possible stops of some French nuclear power plants after some failures were detected, although mid‑week EDF announced that it would not be necessary to make stops for this reason, and the decline in renewable energy production in some of the countries analysed.

On Monday, September 23, prices were lower than those obtained on Monday, September 16, for most of the markets analysed, with the exception of the Nord Pool market where they increased by 14%. However, compared to last week’s average, prices rose for the EPEX SPOT markets in Germany, France, Belgium and the Netherlands by €5.80/MWh, €3.42/MWh, €3.76/MWh and €3.95/MWh respectively and to a lesser extent for the Nord Pool market, which rose €0.84/MWh. In the MIBEL markets in Spain and Portugal, IPEX and N2EX, decreases of €‑0.78/MWh, €‑0.4/MWh and €‑1.69/MWh were perceived, respectively, with respect to the average price of the previous week. 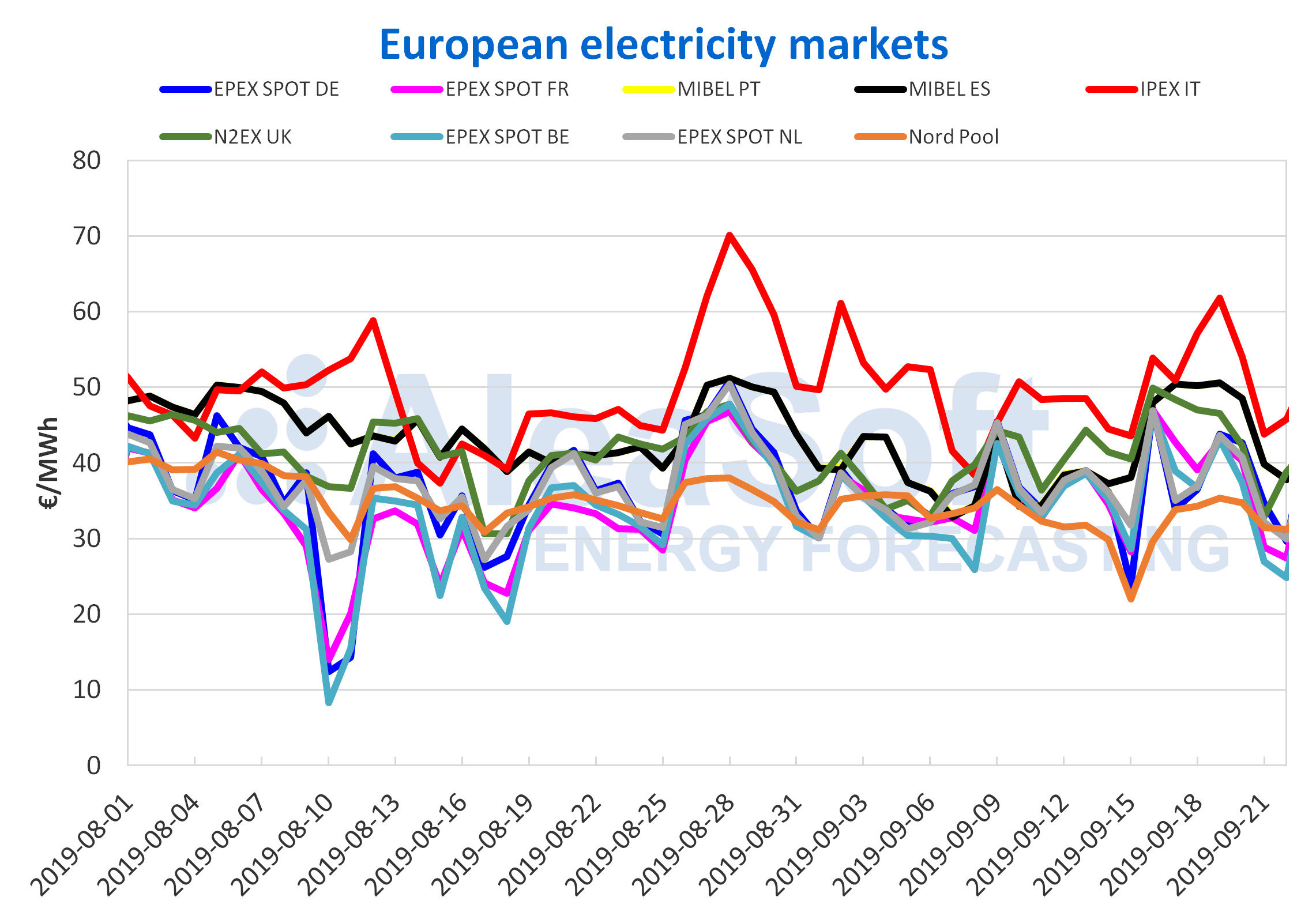 The prices of European electricity futures for the fourth quarter of 2019 were lower at the end of last week compared to Friday, September 13, for most markets. The exceptions were the MTE market in Italy, operated by GME, which increased by 1.6% and ICE and NASDAQ markets in the Nordic countries that closed last week with an increase close to 3.0%. France’s electricity futures in the EEX market were the ones with the greatest variation, with a difference of ‑6.1%, followed by the Belgians, in the ICE market, with a drop of ‑5.3%.

On the other hand, European electricity futures for the year 2020 last Friday, September 20, remained with little variation and without showing a regular trend among them compared to the previous Friday. The markets that changed the most were the ICE and EEX markets in the UK and ICE and NASDAQ in the Nordic countries, with an increase close to 2.0%. On the contrary, the EEX markets in France, EEX and OMIP in Spain and OMIP in Portugal had a variation close to ‑1.0%, while Italy’s futures in the MTE market continued without variation.

Last week, the wind energy production in France was the highest in the last four months. The recovery from the previous week was 435 GWh, which represented an increase of 155%. In Spain and Portugal, similar cross‑weekly percentage falls occurred, ‑52% and ‑54%, respectively. The generation from this renewable source had little variation in Germany, where there was an increase of 2.5% compared to the previous week. On the other hand, in Italy it also fell in the week of September 16, with the cross‑weekly decrease of ‑29%. In AleaSoft it is expected that during this week the wind energy production will increase in most of the European countries analysed, except in Italy, where it is expected to fall slightly. 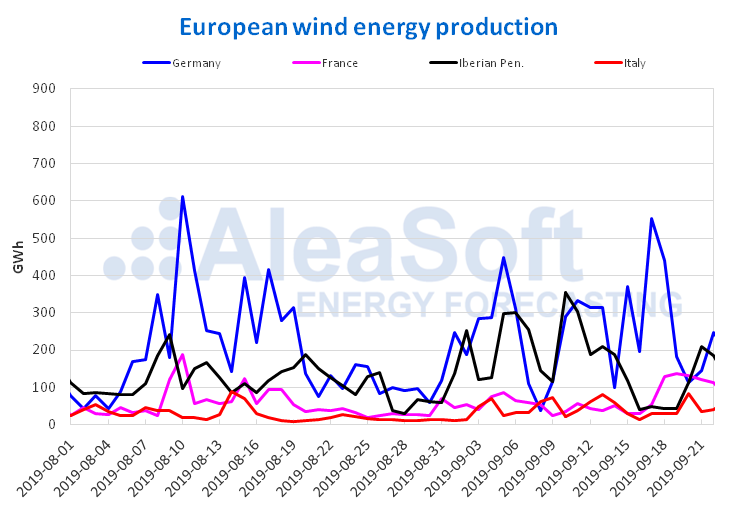 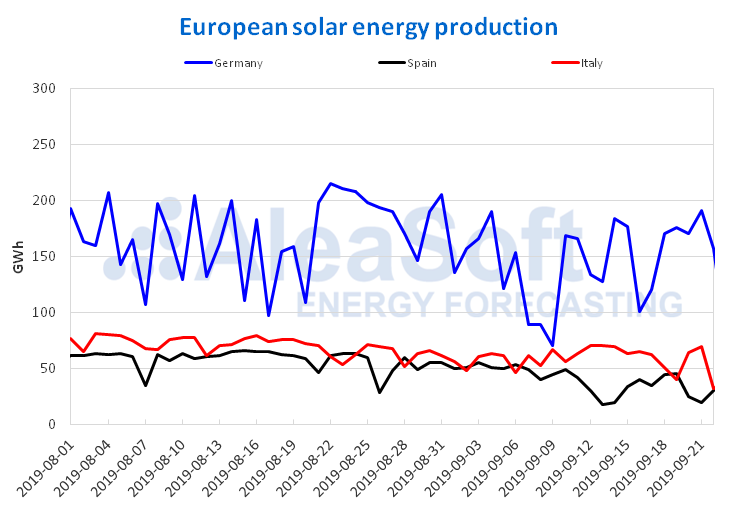