The prices of most of the European electricity markets decrease

AleaSoft, September 26, 2019. The prices of most of the European electricity markets have decreased so far this week compared to the same period of last week. According to AleaSoft’s analysis, this decrease is due to the decrease in the price of the fuels used for electricity generation and the increase in the renewable energy production in a large part of the countries analysed.

So far this week, European electricity markets have presented a heterogeneous behaviour. The average price of most of the markets analysed by AleaSoft fell compared to the first four days of last week. The declines are between ‑0.2% of the IPEX market in Italy and ‑15% of the EPEX SPOT market in Belgium. According to the analysis carried out, the causes of the fall in prices are the decrease in the price of fuels and the increase in the renewable energy production. On the other hand, the average price of the EPEX SPOT markets in Germany and the Netherlands and the Nord Pool market in the Nordic countries rose in the analysed period, the German market being the fastest growing, by 12%.

The IPEX market in Italy continues to be the one with the highest price in Europe and this Wednesday, September 25, the daily average price has again exceeded €60/MWh.

The MIBEL market in Spain and Portugal has maintained a growing trend in the last three days, closing with an average price of €48.55/MWh for today September 26 and ranking as the second with the highest price in Europe. It should be noted that during the previous two days, the average price of the EPEX SPOT market in Germany was higher than that of the MIBEL market. Specifically, the average price on Tuesday, September 24, in the German market was €4.45/MWh above the Iberian. This market had not exceeded the MIBEL market to that extent since April of the current year, when the daily average price for Thursday, April 25, was €9.63/MWh higher. These differences in recent days have been reinforced by a low generation with renewable technologies in Germany that have increased the prices, being the opposite for the Iberian market. 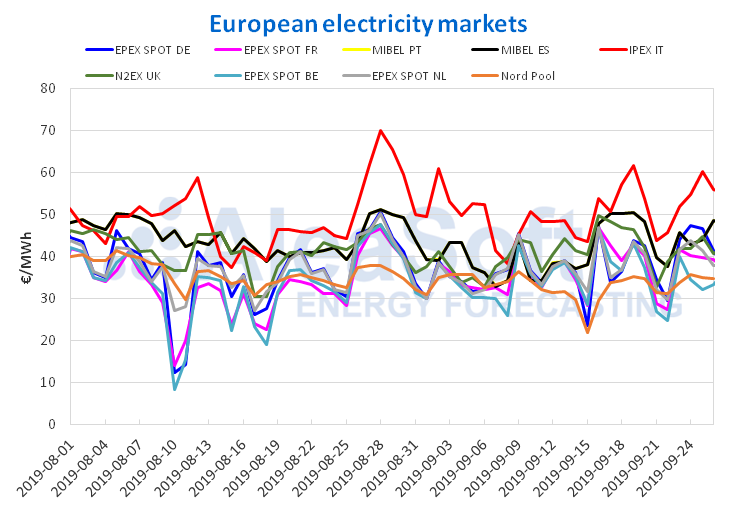 The price of the Brent oil futures for the month of November in the ICE market has experienced a continuous decline since Monday, September 23. That day the price reached was $64.77/bbl, $0.49/bbl above the price of Friday, September 20. So far this week, the prices dropped to $62.39/bbl this Wednesday, September 25, ‑1.9% lower than the settling price on Wednesday of last week. This price decline is related to the increase in US oil inventories, the progressive recovery of production levels in the oil facilities of Saudi Arabia, after the attacks on September 14, and a renewed sharpening of the trade conflict between the United States and China.

The TTF gas futures in the ICE market for the month of October began the week of September 23 with a price of €12.24/MWh, which represents a value ‑20% lower than the Monday of the previous week. On Tuesday, September 24, this price experienced a slight rise, of 0.8% compared to Monday, but on Wednesday, September 25, the price continued to fall to €11.95/MWh, only €0.10/MWh above the minimum value recorded this September, corresponding to Monday, September 2.

Since the beginning of this week, the prices of the API 2 coal futures in the ICE market for the month of October declined progressively, starting at $61.50/t, on Monday, September 23, until $58.15 /t reached this Wednesday, September 25. In general, this week’s prices have been lower than the minimum value recorded last week, $62.15/t, corresponding to Wednesday, September 18. Particularly, the value reached yesterday Wednesday is ‑6.4% lower than that of Wednesday of the previous week. Also, the prices of the last two days are below the average of $60.84/t so far in September.

The prices of the CO2 emission rights futures in the EEX market for the reference contract of December 2019, the first days of the week that began on September 23, showed a downward trend similar to the previous week, although this week the decline was smoother, of about ‑1.1% daily. On Wednesday, September 25, the price dropped to €25.22/t, standing at a value similar to those reached during the first week of September, when the prices remained between €25.09/t and €25.54/t.

The prices of the European electricity futures for the fourth quarter of 2019 continued to fall this week and closed yesterday Wednesday, September 25, with a variation that ranges between ‑5.1% and ‑0.9% compared to Friday, September 20. This time it was the EEX market in France that showed the smallest variation, after a sharp drop at the end of last week. At the other extreme, the EEX market in Germany continued to decline and closed with a difference of ‑€2.38/MWh. It also highlights the decline suffered by the ICE and NASDAQ markets in the Nordic countries, after showing themselves decoupled with the rest of the markets at the end of last week.

Similarly, the European electricity futures for the year 2020 fell on Wednesday compared to last Friday. In the case of these futures, the EEX market in Germany is also leading the overall decline, mainly affected by the lower fuel prices. The rest also culminated yesterday Wednesday with considerable falls compared to the previous Friday. The exceptions were the EEX market for Spain and OMIP markets for Spain and Portugal that closed with a difference close to ‑€0.50/MWh, which represented a variation of only ‑0.9%.

In Mainland Spain, the electricity demand fell 1.9% so far this week compared to the first three days of the previous week. According to calculations made by AleaSoft, once the effect of the September 24 holiday in Barcelona was corrected, the decrease was ‑0.6%. In the same way, in Germany, France and Italy the electricity demand fell between ‑1.1% and ‑2.5% in the aforementioned period. In Belgium, the demand for the first three days of this week was very similar to that of the same period last week, while in Great Britain and the Netherlands it increased by 1.5% and 3.1%, respectively. For next week, AleaSoft forecasting indicates that the electricity demand in Germany, Italy and the Netherlands will decrease, and that in the rest of the European countries analysed will rise slightly. 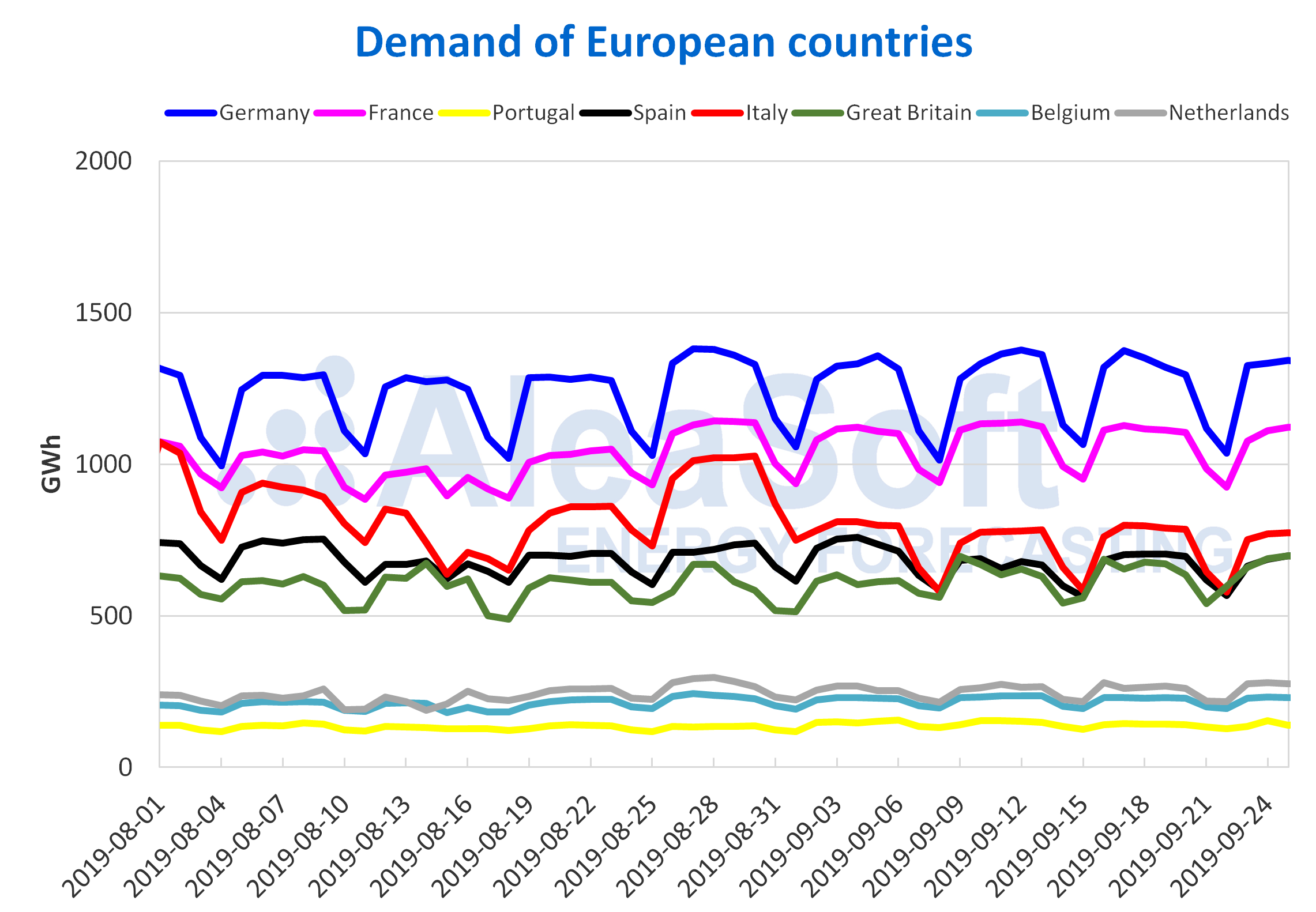 The average wind energy production in Spain increased by 54% from Monday to Wednesday of this week compared to last week’s average. In Italy the average generation values were doubled with this technology, with an average daily production of 76 GWh until Wednesday, September 25. On the other hand, France and Portugal had increases of 5.0% and 58%, respectively. In the case of Germany there was a fall of ‑35%. In AleaSoft it is expected that, for the following week, the wind energy production will recover in Germany and Italy but it decreases in the rest of the countries mentioned above. 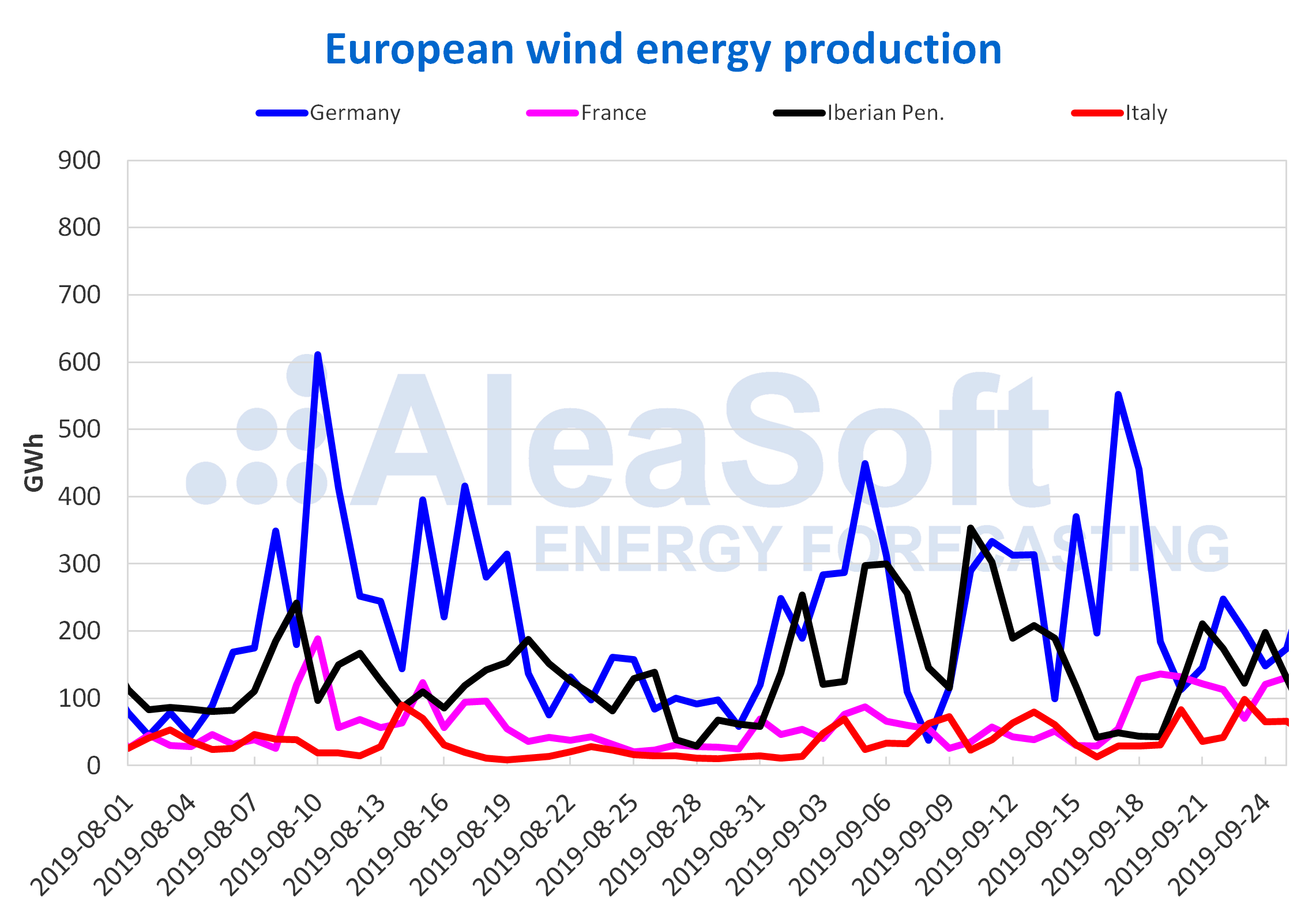 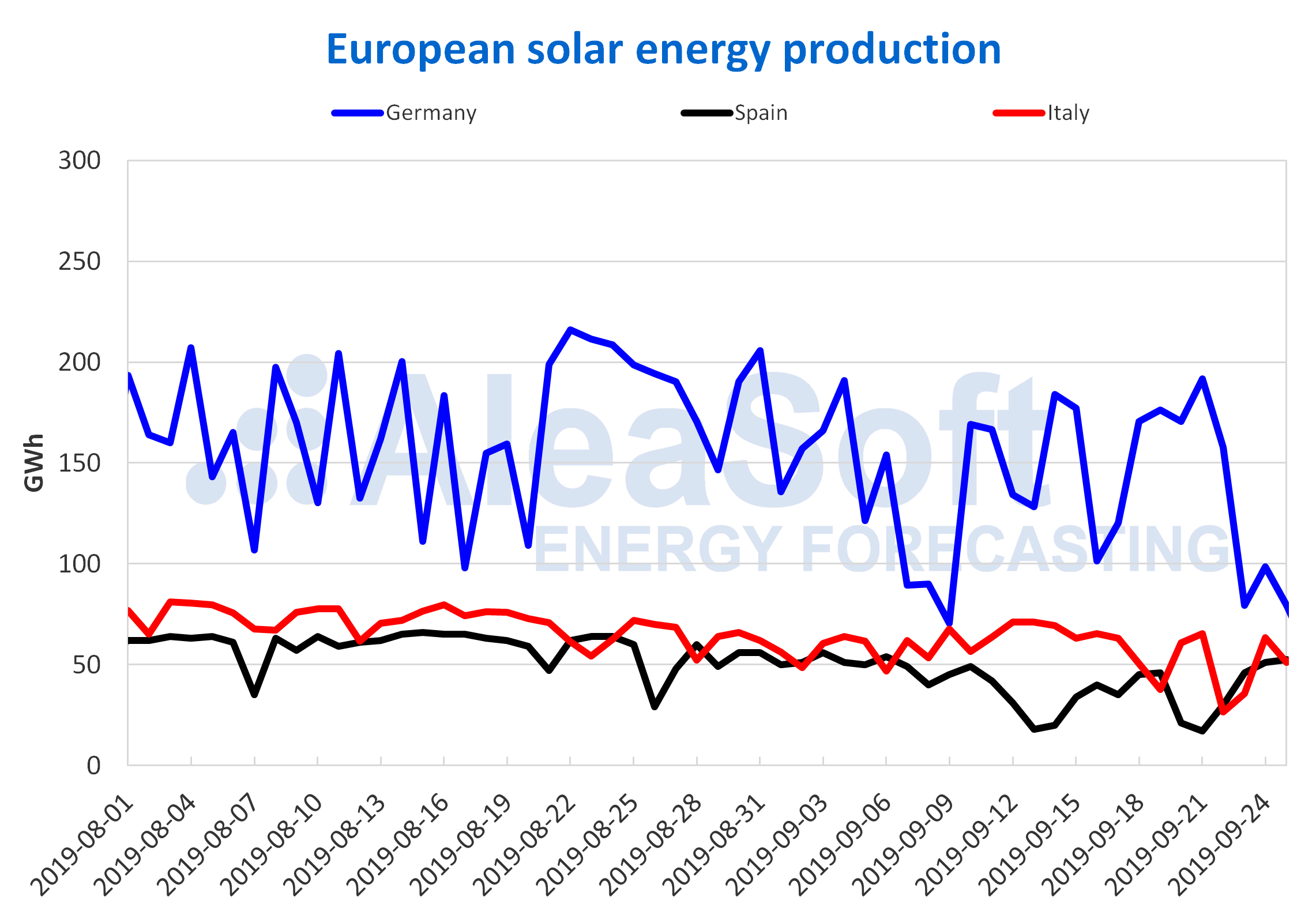