AleaSoft, March 10, 2020. Recently, news was published in which it was pointed out that the low prices of the MIBEL electricity market may endanger the already signed PPA and that caused concern in the photovoltaic industry. In this context, at AleaSoft, an analysis of the current situation of low prices was carried out comparing it with historical market data.

The current prices of the MIBEL market of Spain are an issue that caused concern among the investors in renewable energy. The fear of an abrupt drop in the market price due to the massive penetration of solar energy production raises doubts about the profitability of the projects. It also worries the off‑takers of the already signed PPAs with prices higher than those currently seen in the market. However, the behaviour of the prices in the market and their current values do not justify this fear. The elapsed months of 2020, January and February, are each of them in the fourth place among their respective lowest price homogeneous months in the last decade. 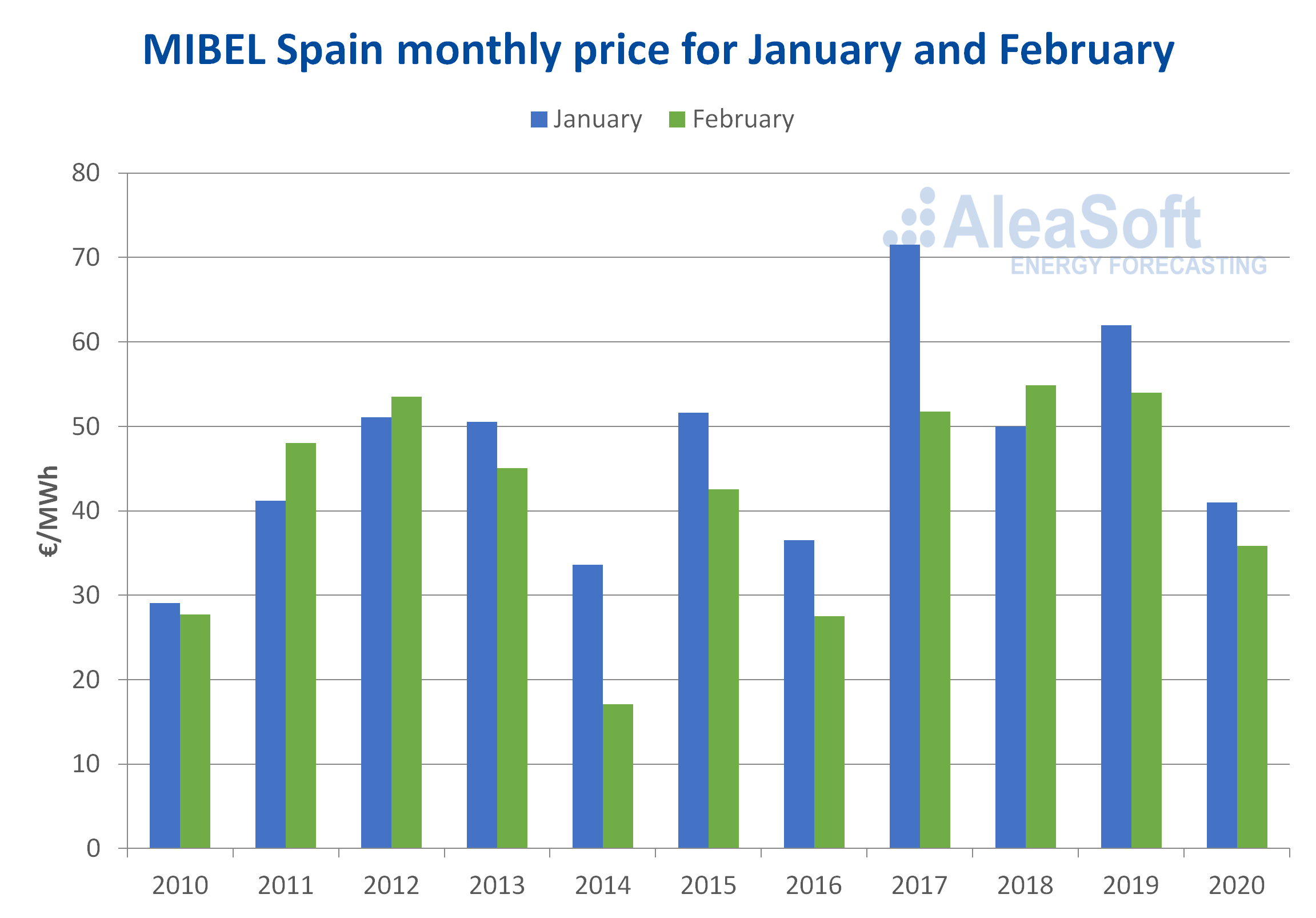 The fact that the prices for January and February are the lowest in the last four years is not only a consequence of the increase in renewable energy generation. In January and February the average temperature was less cold than that of the corresponding months of last year, leading to a decrease in electricity demand of 3.2% and 5.1% respectively. In fact, the month of February 2020, with 3 °C above its historical average, was the warmest of the last 55 years, tied with February 1990. In addition, in the first two months of this year the prices of the fuels used in electricity generation were lower than those of the same period last year, something that was accentuated by the decrease in demand caused by the COVID‑19 coronavirus epidemic.

The lowest monthly average prices in the history of the Spanish market since the entry into operation of the Iberian market MIBEL, in July 2007, were February 2014, with €17.12/MWh, April 2013 with €18.17/MWh, March 2010 with €19.62/MWh and April 2016 with €24.11/MWh. In those years, the presence of the photovoltaic energy in the generation park of Mainland Spain was low, 3.8% in 2010 and 4.5% in 2016. In January 2020 the installed capacity of solar photovoltaic energy represented 8.3% of the total installed in the Spanish peninsula. If the total of the renewable energy capacity is analysed, including the hydroelectric, wind, solar photovoltaic and solar thermal energies and the rest of renewable technologies, in 2010 they represented 45% of the total capacity of the generation park, in 2016, 51% and in January 2020, 55%. 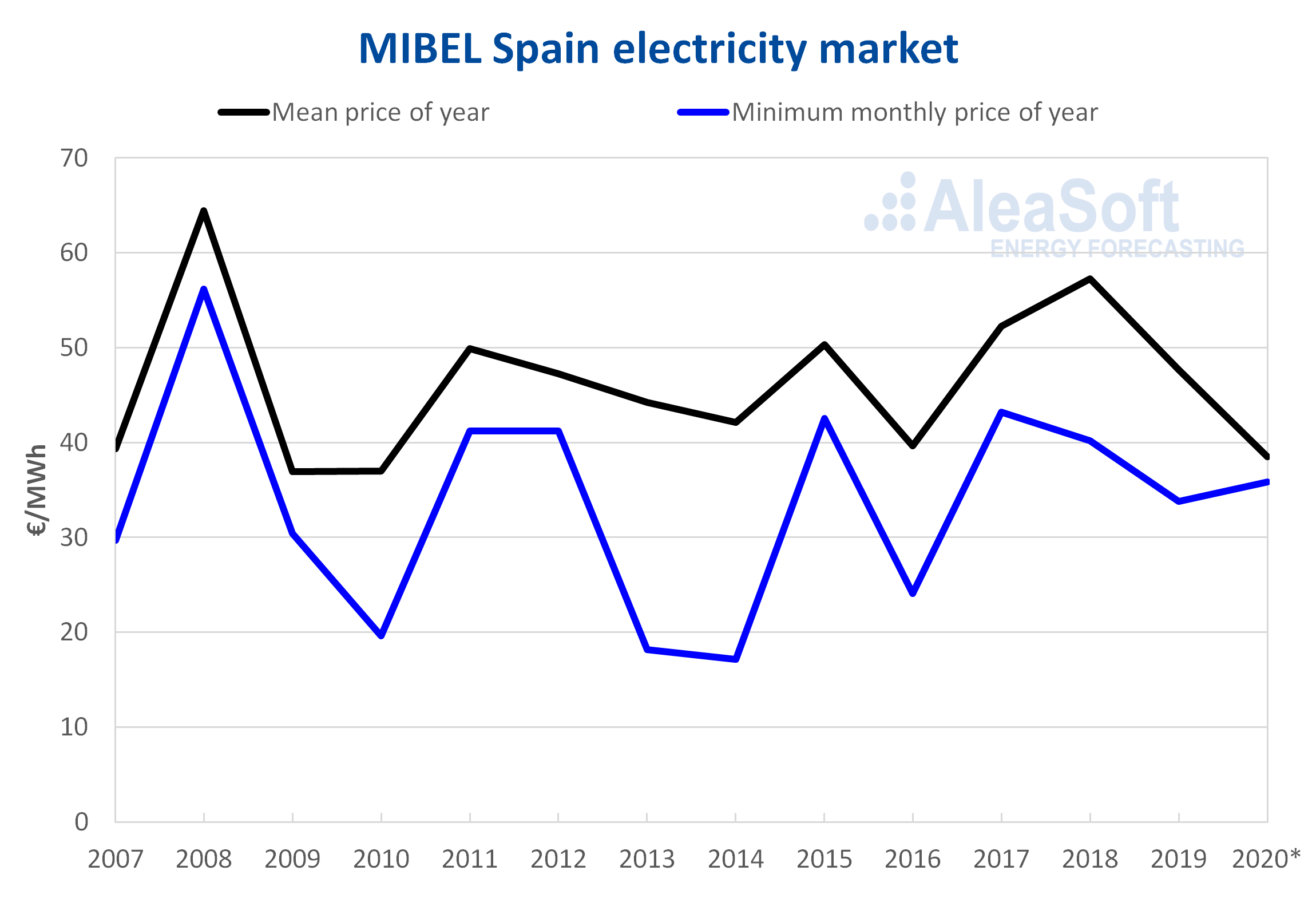 Source: Prepared by AleaSoft using data from OMIE. The 2020 values are calculated with data until February 29.

As aforementioned, at the beginning of 2020 the fuels prices are being lower than those of 2019. In fact, the current values of the TTF gas and the Brent oil are at historic lows. In the case of the TTF gas, values of around €9/MWh were registered so far this month and even fell below that value in recent days. The fundamental causes of these low prices are the excess supply, the weather conditions of this winter, which limited the gas demand, and the decrease in demand due to the coronavirus. These values are very close to those of mid‑2009 when the fall in demand due to the economic crisis brought the prices to an average of €8.91/MWh in August of that year.

In the case of the Brent oil, at the beginning of March the prices were around $50/bbl and recently they reached prices around $35/bbl. The decline in prices in recent months is due to the decrease in demand associated with the expansion of the coronavirus since the first outbreak was detected in China in January. Recently, the OPEC+’s failure to agree on new production cuts that helped stabilise the price also exerted its downward influence. At the moment these prices are higher than those reached in January 2016, when the excess supply resulted in a monthly average price of $31/bbl.

In all markets where there are buyers and sellers, there are price fluctuations that favour one or the other party. The low prices favour the buyers, including the electro‑intensive industry and the large consumers in general, while the high prices favour the sellers. The promoters and investors who signed PPA without taking into account the market fluctuations were oblivious to a medium and long‑term market vision. The medium and long‑term electricity market prices forecasts are essential for making objective financial plans and for the risk management.