AleaSoft, August 26, 2019. AleaSoft analyses the prices in the fuels markets, CO2 emission rights, European electricity markets and renewable energy production in the week that began on August 19. The week was characterised by the increase in prices in most electricity markets compared to the previous week, except in the MIBEL and Nord Pool markets. The electricity demand rose across the continent and the wind energy production fell, two factors that favoured the price increase.

The prices of Brent oil futures for the month of October in the ICE market settled this Friday, August 23 at $59.34/bbl, 1.6% below the maximum price of last week, $60.30/bbl, reached on Wednesday, August 21 after having presented an upward trend at the beginning of the week. In August, the price of this product ranged between $56/bbl and $62/bbl. In general, the prices of Brent futures are being conditioned by the escalation in trade tensions between the United States and China and the tariff measures taken by both countries that will begin to be applied from the coming months, which decrease prices, and by OPEC+ production cuts, which make them rise.

The TTF gas futures in the ICE market for the month of September ranged last week between €11/MWh and €11.50/MWh. On Friday, August 23, they settled at €10.58/MWh, 0.9% above the two‑year historical minimum reached on Monday, July 29 of this year.

The prices of API 2 coal futures in the ICE market for the month of September settled at $54.65/t on Friday, August 23, reaching the minimum value of the last seven weeks and continuing the downward trend that has been observed since August 14.

The CO2 emission rights futures in the EEX market for the December 2019 reference contract showed a downward trend throughout the past week, settling at €25.08/t on Friday, August 23, a 3.4% below the settling price on Friday, August 16. 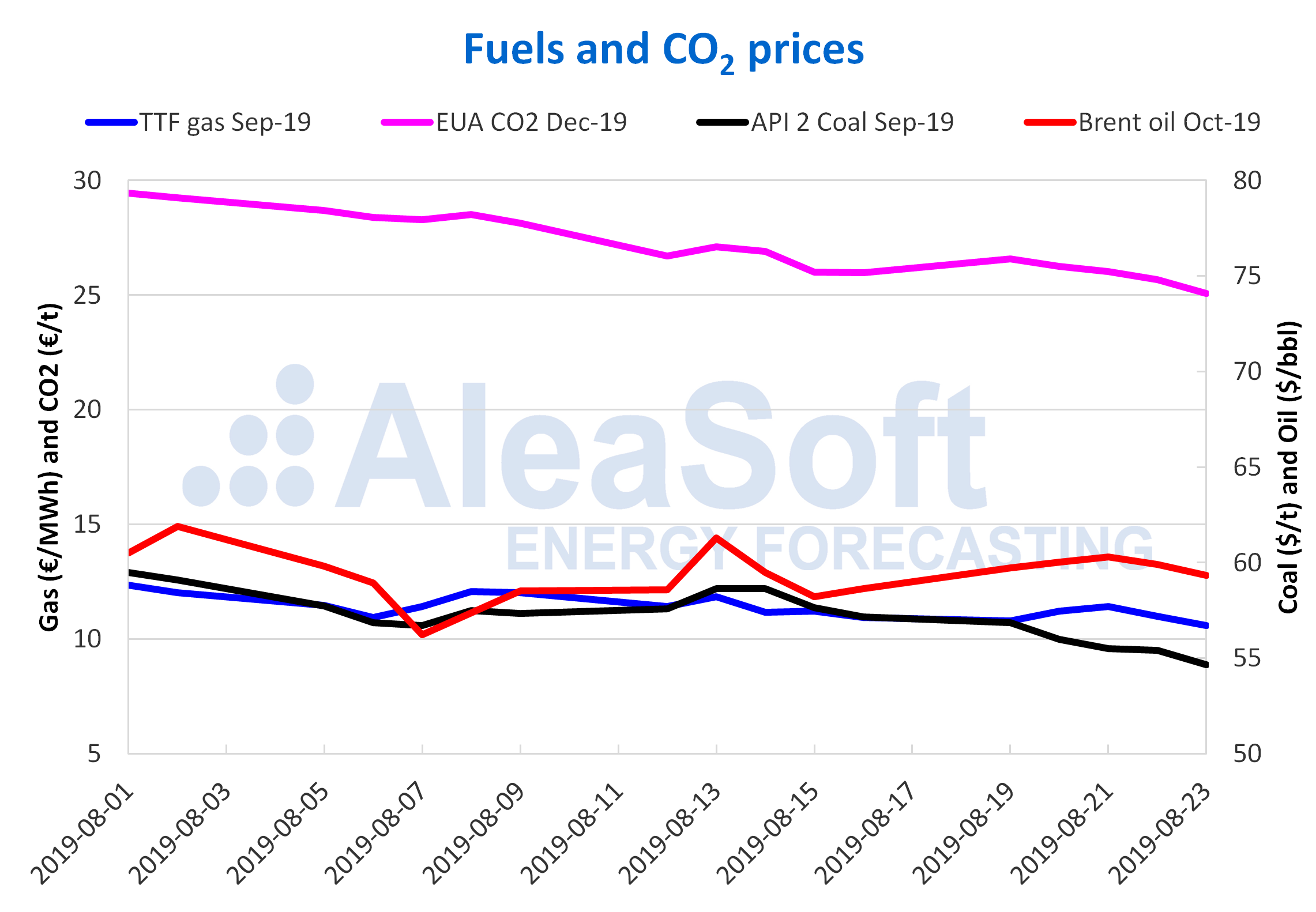 The prices of most European electricity markets rose the week just ended compared to the week of August 12. The EPEX SPOT market in Belgium experienced the biggest increase, of 15% compared to the average of the previous week. The only markets that registered declines in the week of August 19 were the MIBEL market in Spain and Portugal, where the increase in wind energy production in Spain led to the fall in prices, of ‑4.0% week-on-week, and the Nord Pool market of the Nordic countries, in which the prices remained virtually unchanged, with a slight decline of only €‑0.01/MWh.

Last week, the electricity demand increased in all the countries analysed, thanks to the fact that the temperatures were higher in general and also to the effect that the holiday of August 15 had on the electricity consumption of most of the European countries during the week of August 12. The wind energy production fell considerably on the continent, with the only exception of Spain. On the other hand, although the solar energy production increased in Germany, it decreased in Spain and Italy. The combination of an increase in electricity demand and a decrease in renewable energy production, mainly wind energy, favoured the increase in prices during the analysed period.

The IPEX market in Italy was the one with the highest price in Europe during the past week, with values above €45/MWh, disassociating from the other two markets in the highest price group, the Iberian MIBEL and the British N2EX, whose prices were over €40/MWh. The markets of the lowest price group in Europe, the Nord Pool market and EPEX SPOT markets of Germany, France, Belgium and the Netherlands, had values between €30/MWh and €35/MWh, although the German and Dutch markets reached values around €40/MWh on August 20 and 21. The French market was the one with the lowest price, with an average of €32.02/MWh.

At the beginning of this week all markets have experienced significant increases. Prices today, August 26, rose compared to last week’s average, with a growth reaching almost €8/MWh in the EPEX SPOT markets of Germany, France, Belgium and the Netherlands. With these increases, today the average price of the German market, €45.66/MWh, was higher than that of the Iberian market, €43.18/MWh.

On the other hand, in the main electricity futures markets in Europe, last week was a week of declines for the products corresponding to the fourth quarter of 2019 and the 2020 calendar year. Of the products analysed, the only one that remained unchanged between the August 16 and 23 sessions is the one corresponding to the next quarter in the Italian MTE futures market, which is operated by GME. In the case of the futures for the next quarter, the biggest decrease in the analysed period was that of France’s futures in the EEX market, with ‑3.9%, while for the product corresponding to next year, the highest decline occurred in the Nasdaq market for futures in the Nordic countries, with ‑4.1%. The fall in the prices in the electricity futures markets occurs in parallel to the decrease in the prices of CO2 emission rights, which in the EEX market was ‑3.4% between the sessions of August 16 and 23.

The wind energy production decreased last week in most major European producers, just as AleaSoft anticipated earlier that week. In France and Italy, the minimum weekly wind energy production values for 2019 were recorded, according to the seasonal levels of this time of the year. The weekly production was 265 GWh and 109 GWh respectively, while the significant week‑on‑week descents were ‑53% and ‑60%, in that order. In AleaSoft it is expected that during this week there will be a recovery of wind energy production in both countries.

The week just concluded was accompanied by two interesting facts in the Iberian Peninsula, where there was an increase in wind energy production of 13%. Spain saw its highest weekly value in the current month, with 781 GWh. In Portugal, the production with this renewable source moved in a totally opposite direction, where 168 GWh were generated, being the lowest weekly value so far in this month of August.

In the case of Germany there was a decline in wind energy production of ‑45%. It is expected that a downward behaviour will also occur during the current week in Germany and throughout the Iberian Peninsula, maintaining this trend in the joint production of European countries analysed for the third consecutive week. 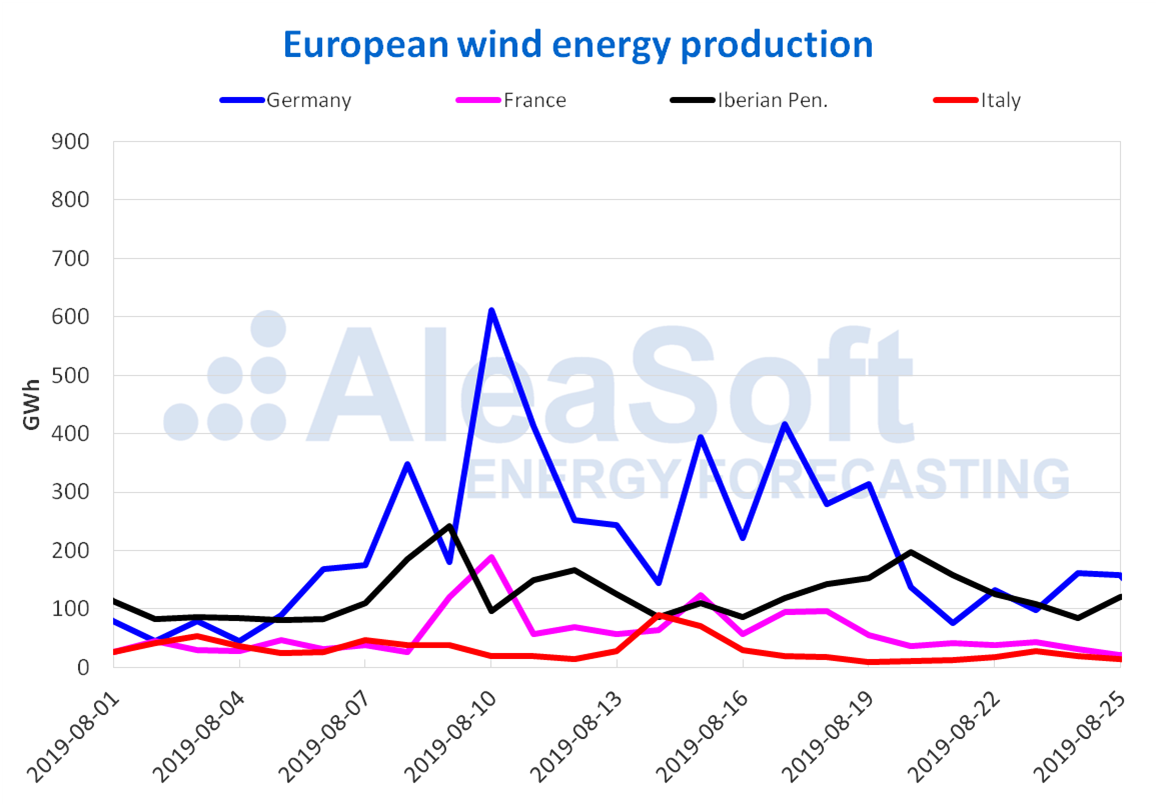 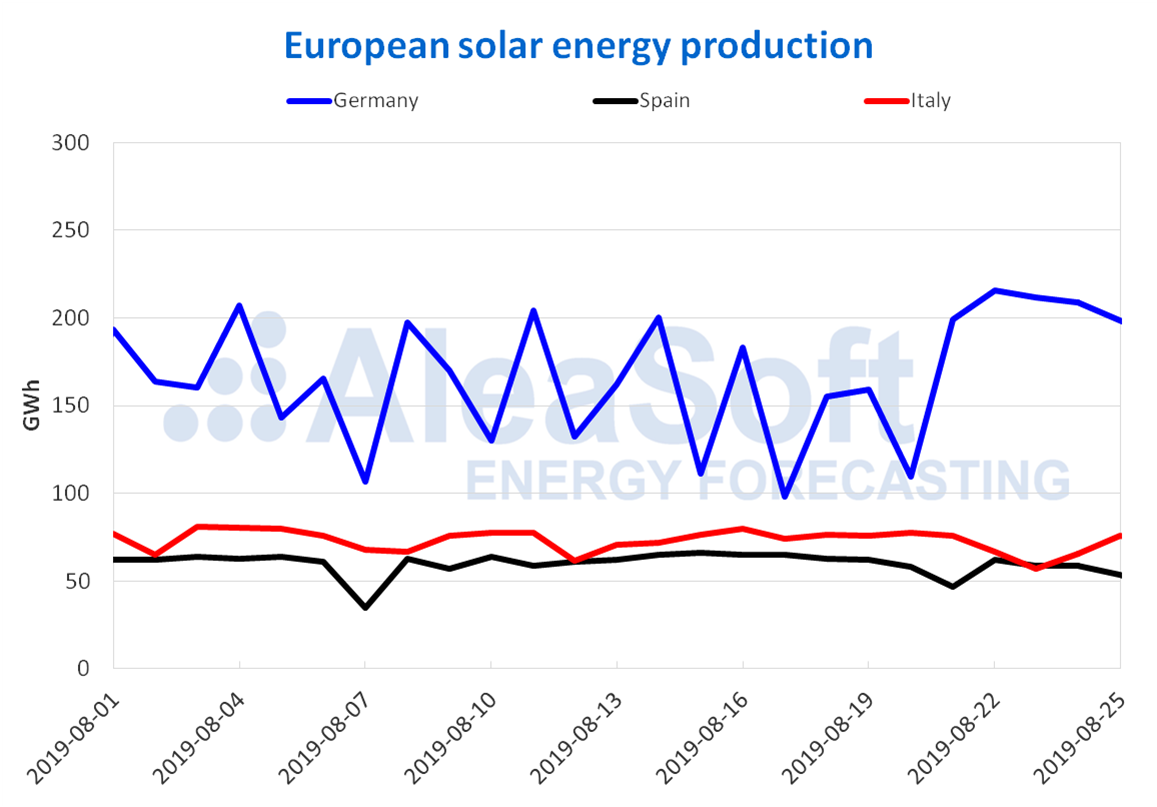