AleaSoft, July 22, 2019. In a domino effect, the forecasted increase in temperatures for this week of July 22 is affecting several energy markets. At the end of last week, price increases began to be seen in the gas, coal and CO2 emission rights markets, and this week began with increases in the electricity markets. All this despite the good performance of renewable energies and photovoltaics in particular, which increased in the main European markets.

The Brent oil futures prices for the month of September in the ICE market settled this Friday, July 19, at 62.47 $/bbl, after being traded downwards during the past week and reaching 61.93 $/bbl on Thursday, July 18, the lowest settlement price of the week with a decrease of 6.8% compared to the price of Monday July 15 at 66.48 $/bbl. This increase in the price of Brent was conditioned by the new escalation of geopolitical tensions between the United States and Iran that occurred late last week, despite the downward pressure exerted by the trade tensions between the United States and China and by the decreasing demand for crude oil.

The TTF gas futures in the ICE market for the month of August settled at 10.81 €/MWh this Friday, July 19, 0.72 €/MWh over the two-week minimum price of 10.74 €/MWh reached on Thursday, July 18, after presenting a downward trend during the past week. This increase in gas futures prices, as well as the prices of API 2 coal futures and CO2 emission rights, is conditioned by the increase in electricity demand as a result of the imminent forecasted heat wave for the beginning of this week in much of Europe. 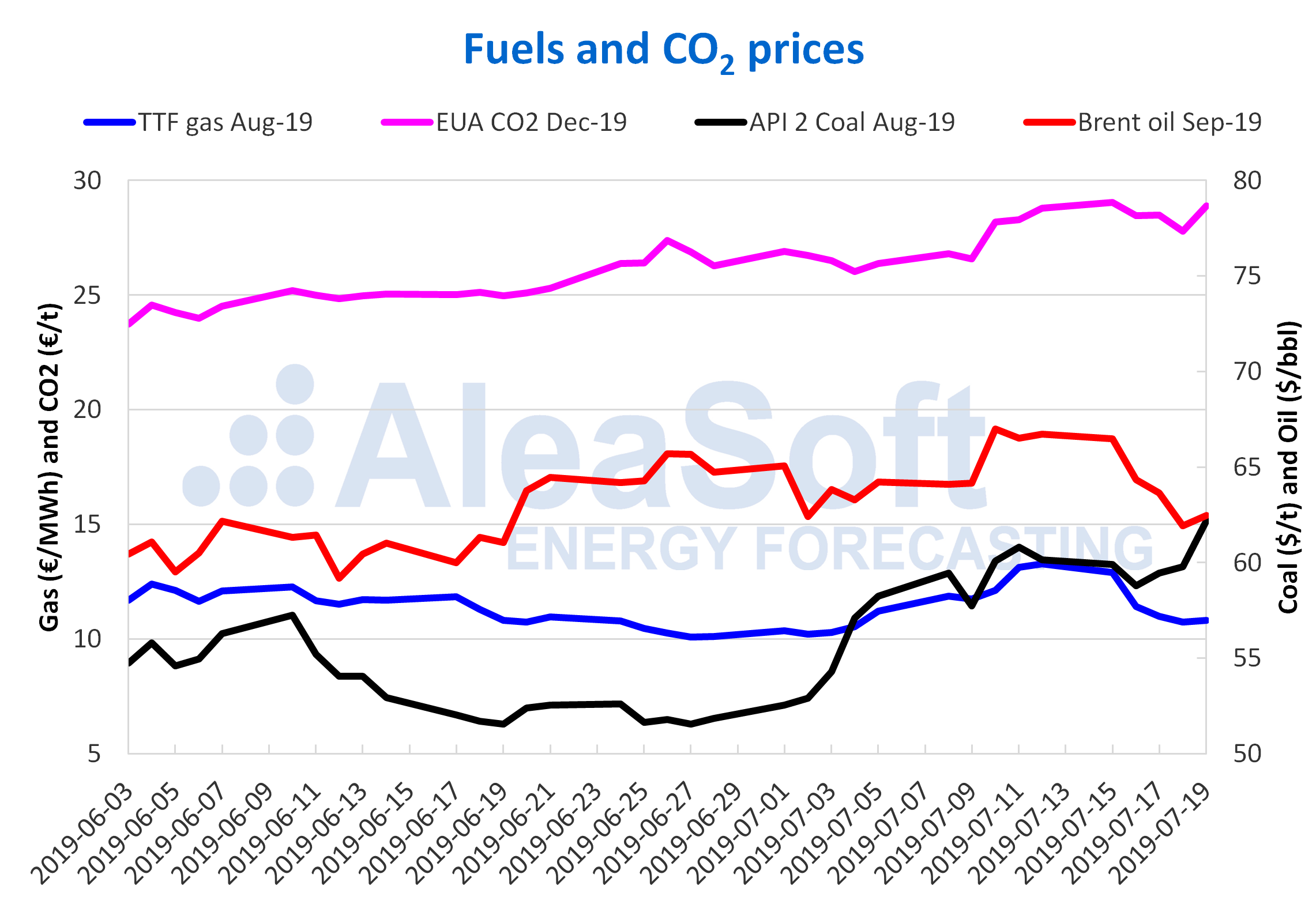 The CO2 emission rights futures prices in the EEX market for the December 2019 reference contract settled at 28.88 €/t this Friday, July 19, after settling at 29.05 €/t on Monday, July 15, and recording a downward trend for the rest of last week. Friday’s increase of 4.0% from last week’s minimum price of 27.78 €/t, reached on Thursday, July 18, was possibly conditioned by the political events in the UK with respect to Brexit, which could be decided during this week, in addition to the heat wave that is expected for the next few days in Europe.

During last week, between July 15 and 21, the EPEX SPOT markets of France, Germany, the Netherlands and Belgium remained very clustered with an average price around 40 €/MWh and an increase between 2.2% and 4.2%. The Nord Pool market of the Nordic countries is the market that experienced the largest increase compared to the previous week, of 9.4%, but still continued with the lowest price among the European electricity markets.

In the other markets, MIBEL of Spain and Portugal and IPEX of Italy, which have higher prices, registered a drop last week compared to the previous week of 1.0% and 4.0%, respectively. The N2EX market of Great Britain, meanwhile, recorded a slight increase of 0.5%. In this second group of markets with higher prices, the weekly average prices were above 47 €/MWh.

This week, attention should be paid to the French nuclear energy production. If the forecasted heat wave increases the temperature of the water in some rivers that provide cooling to nuclear power plants, they may see their production reduced due to environment protection restrictions. A reduction in nuclear power in France usually affects the prices of all European markets because it inverts the interconnections flow direction: where France normally exports electricity, it changes to importer to cover its nuclear unavailability. It is expected that the increase in demand due to the heat wave, in addition to the drop in nuclear energy production, will lead to an increase in production with gas and coal during this week, which will push the electricity markets prices upwards.

The prices of European electricity futures for the fourth quarter of 2019 ended last week in general with ​​slightly lower values than the previous week. In most of the markets there were declines between 0.6% and 5.6%. This behaviour had two exceptions: on the one hand, the Italian futures in the MTE market operated by GME, which remained immobile at 63.89 €/MWh, and on the other hand, the futures for the Nordic countries in the ICE market, which shot up in the session on Monday, July 15, and kept growing slightly during the week, except for the session on Friday, July 19, when the settlement price was 43.65 €/MWh. This price, although it represents a slight decrease compared to the previous day, is a much higher value than the settlement price of the previous Friday, specifically an increase of 12.1%. Meanwhile, in the NASDAQ market, the product of the last quarter of the year for the Nordic countries also recorded a price increase, although much more moderate, of 1.4%.

Regarding electricity futures for the year 2020, the behaviour of the markets has been more heterogeneous and with less pronounced variations. The country that varied the most was UK, both in the EEX market and in the ICE market, with decreases of 3.4% and 3.2%, respectively. In the other countries, prices at the end of last week remained fairly stable, with variations that exceed 1% only in the case of the Netherlands, with a decrease of 1.1%.

In the week of July 15 compared to the previous week, the wind energy production recovered 75% in Portugal and 5.0% in Spain; it had a slight increase of 3.3% in Germany, while it decreased 20% in France and 44% in Italy. For this week, it is expected that the generation with this technology will experience variations similar to those of last week in each of the mentioned countries. 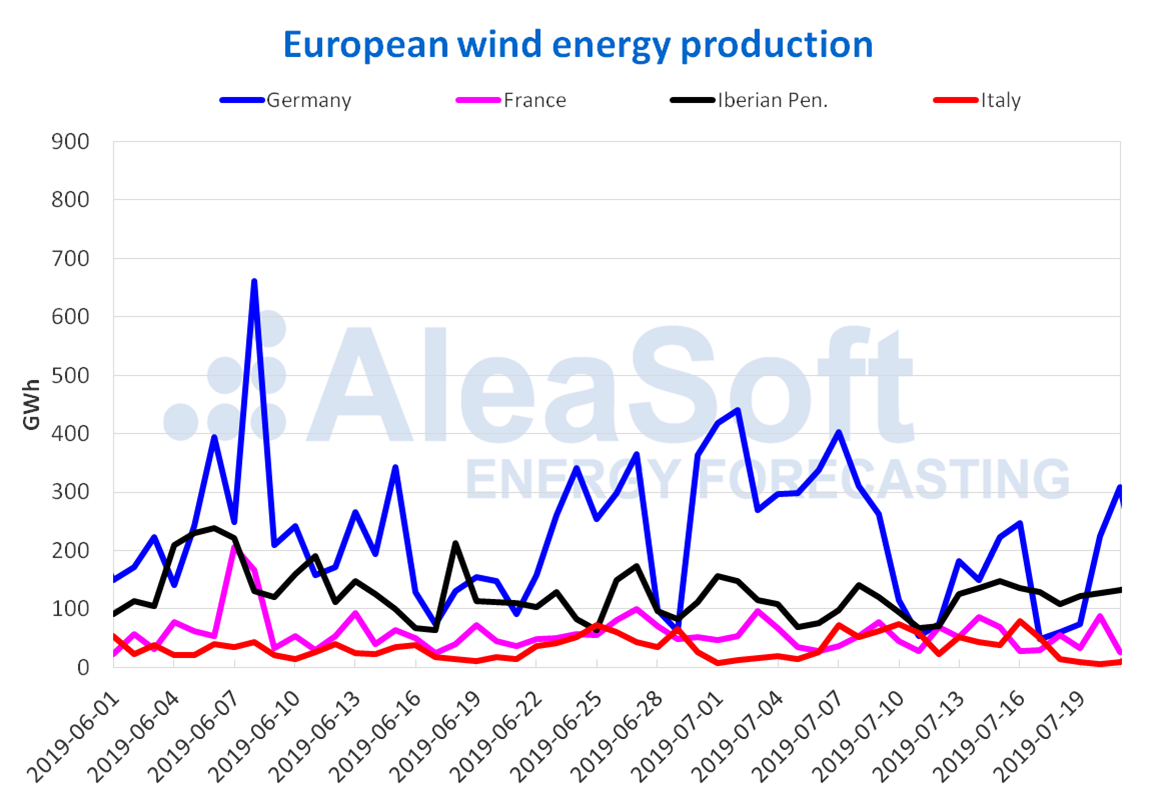 The solar energy production, which includes both photovoltaic and solar thermal technologies, rose in several European countries compared to the week of July 8. In Germany, Spain and Italy the increase was 18%, 13% and 3.8%, respectively. It is expected that, during this week, solar energy production will maintain the upward trend in Germany and Italy, and that it will decrease to some extent in Spain. 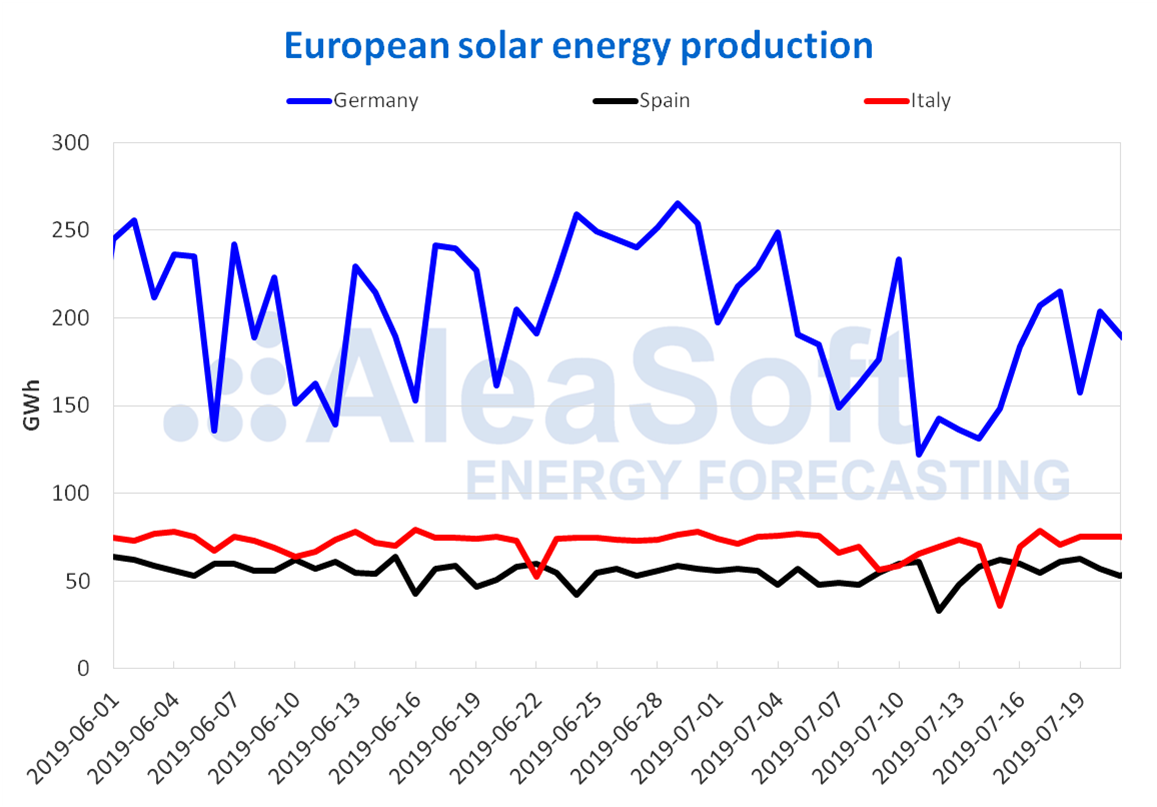