AleaSoft, July 24, 2019. Poland is a country dominated by the electricity production with coal, where the wind energy has already been opening the road to renewable energies for several years and the photovoltaic energy begins to be introduced. But the road is still very long and the goals are very ambitious.

Poland is the most coal-dependent European country, although in Germany it is also important. The challenge of the energy transition and the CO2 emissions reduction in Poland implies to reduce and finally eliminate coal-fired production. But, based on the current situation, these objectives can only be set at the very long term. That is why Poland is one of the states that opposes the zero emission targets in 2050 in the European Union, and currently blocks it. This is because the disappearance of coal will not only affect its electricity market, but also the economy of the regions where coal mining is the main activity.

Poland’s wholesale electricity market, managed by TGE, historically had relatively low prices, although slightly higher than its neighbouring Germany. As expected, the marginal price of the Polish electricity market is determined by the costs of producing electricity with coal. This causes the price in Poland to fluctuate with the variations in the coal and CO2 emission rights prices, the two main sources of costs in the thermal power plants. 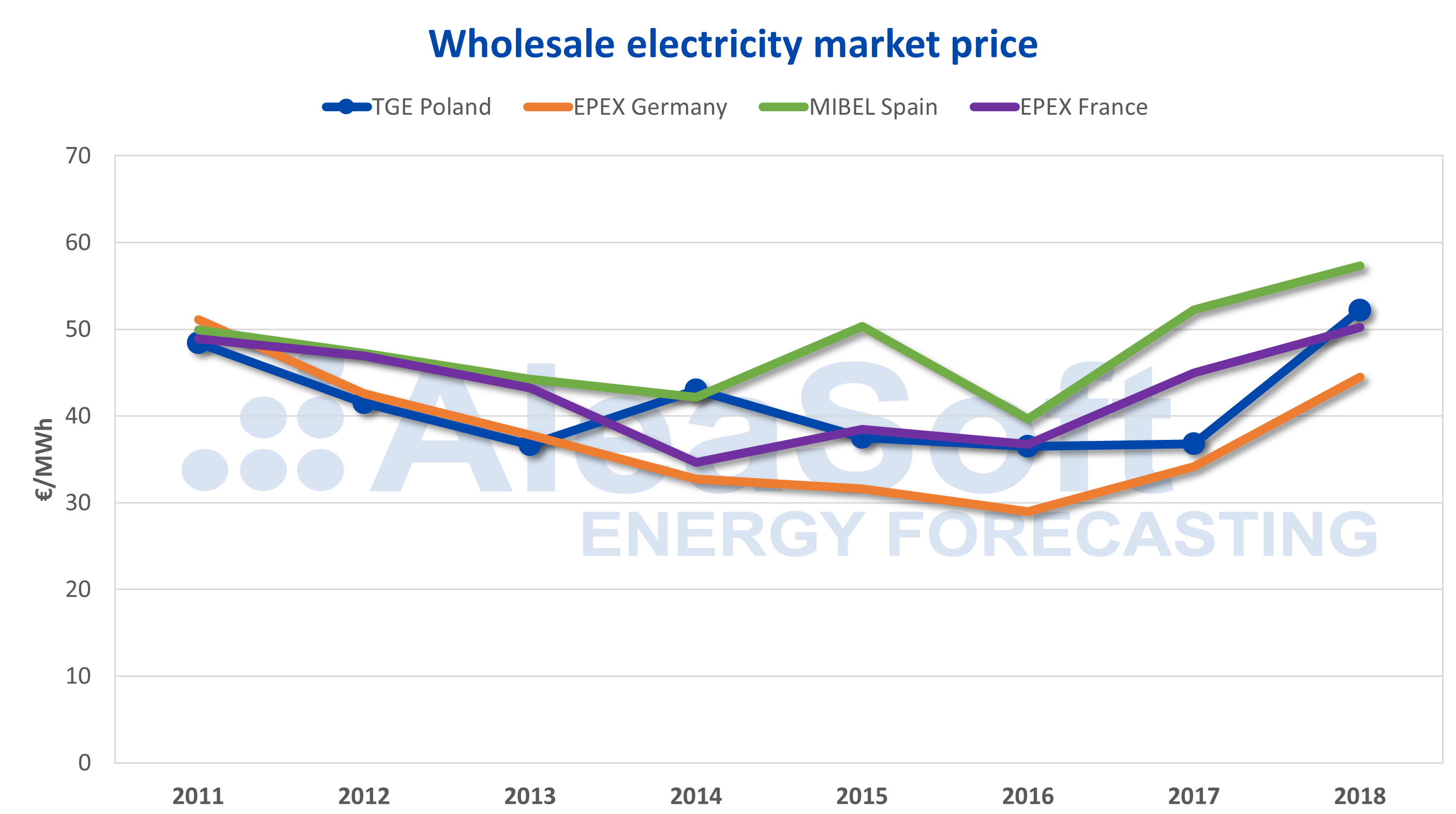 This dependence was clearly seen during the last year 2018. In that year, the electricity market price increased by 42%, compared to the price of 2017, up to 222.63 zł/MWh, equivalent to 52.16 €/MWh, the highest annual price in this market history. In that same period, the CO2 emission rights price skyrocketed 171% and the price of API 2 coal rose 10%. TTF gas and Brent oil both experienced price increases of 32%.

Looking ahead to this year 2019, if the CO2 emission rights price continues around the current 30 €/t, the Polish electricity market price will continue high.

The electricity generation system in Poland is completely dominated by the capacity of the coal-fired power plants. With more than 30 GW, it represents 71% of all national capacity and increased by 15% since 2017. 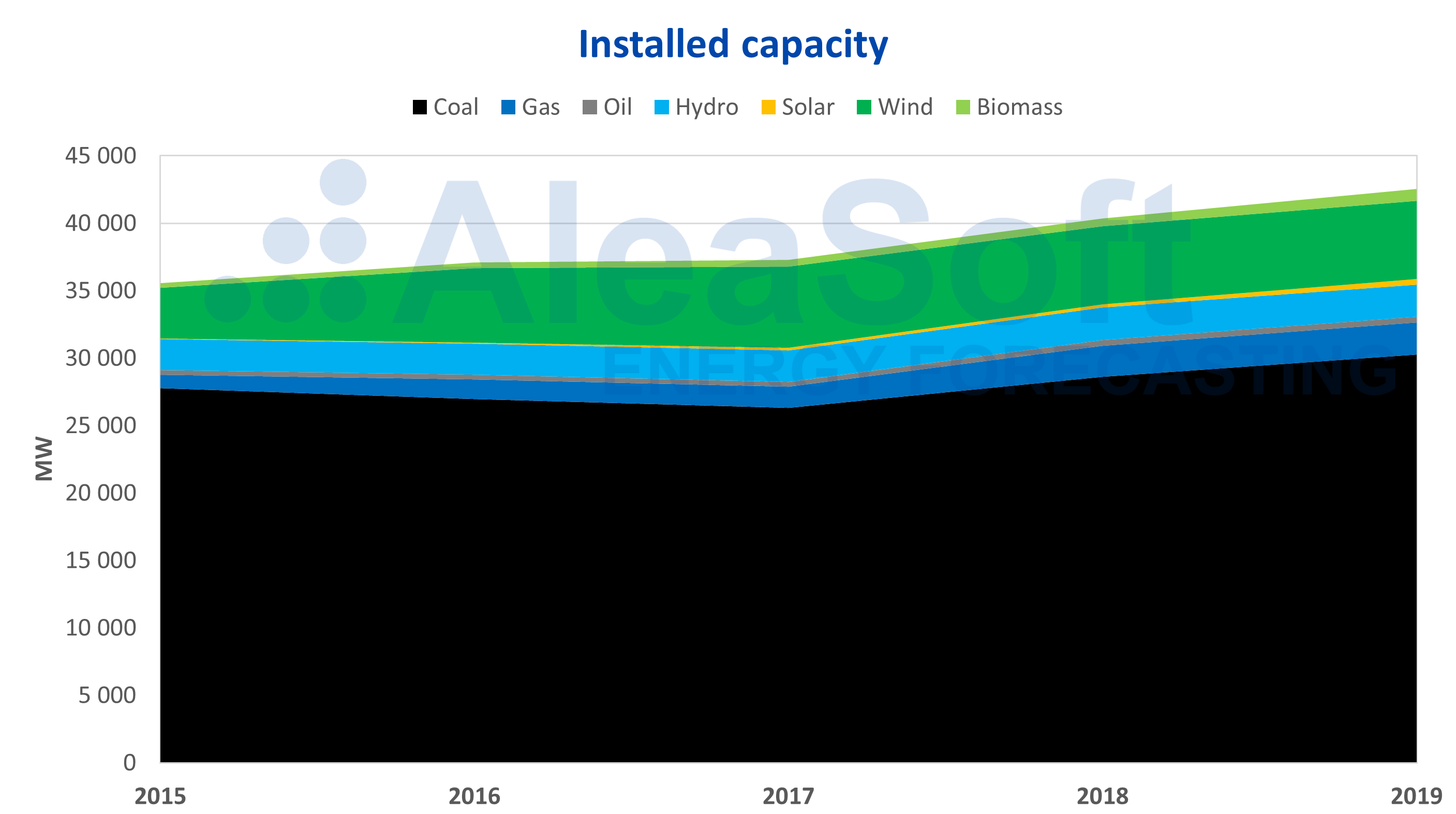 Far behind the coal thermal capacity, there is the wind power which, with about 6 GW, represents 14% of the total. The wind energy capacity grew by 55% since 2015, but since 2017 its growth is completely stagnant. The third position is shared by hydroelectric energy plants and combined cycle gas turbines with 2.4 GW each.

The technology that is experiencing the fastest growth in recent years is the solar photovoltaic. Currently, the country has only 430 MW, but with a growth rate of almost doubling capacity every year for the past three years.

As it is expected with this installed capacity distribution, Poland’s

electricity generation mix is completely dominated by coal. The coal-fired thermal power plants generated 75% of all the electricity produced nationwide in 2018. But only five years ago, in 2014, the coal production share reached 80% and ten years ago exceeded 85%.

Who has displaced coal in recent years? Mainly it has been the wind energy which, as of 2010 when its share in the mix was only 1%, was growing year after year until it ranked second with 7% in 2018, although in 2017 it was close to 9%. Gas has also displaced coal, especially in the last three years, reaching 6% of all electricity produced in Poland in 2018, compared to between 2% and 3% that it had historically represented. 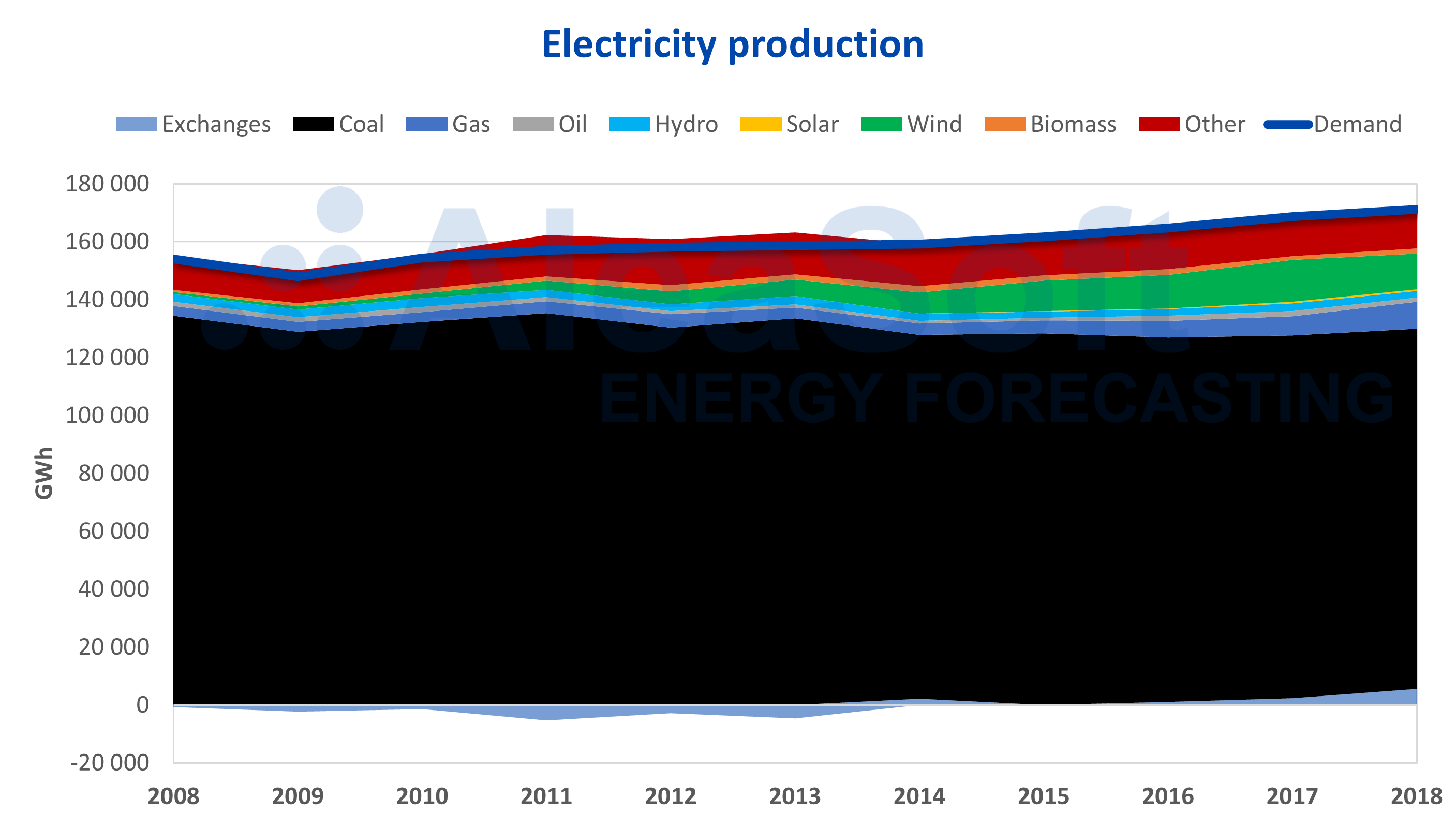 Source: Prepared by AleaSoft using data from ENTSOE-E and IEA.

In recent years, Poland has been a net importer of electricity from neighbouring countries, but this is a fairly recent phenomenon. Before 2014, the situation was the opposite and Poland had a net exporting balance.

In 2018, the country imported 13 342 GWh and exported 7774 GWh, which represents a net importing balance of 5568 GWh. More than half of the electricity that the country imported came from Germany, with 7039 GWh imported and only 19 GWh exported. The rest of the countries from where Poland imported most electricity were Sweden, Ukraine and Lithuania. Almost all exports went to Slovakia and the Czech Republic. 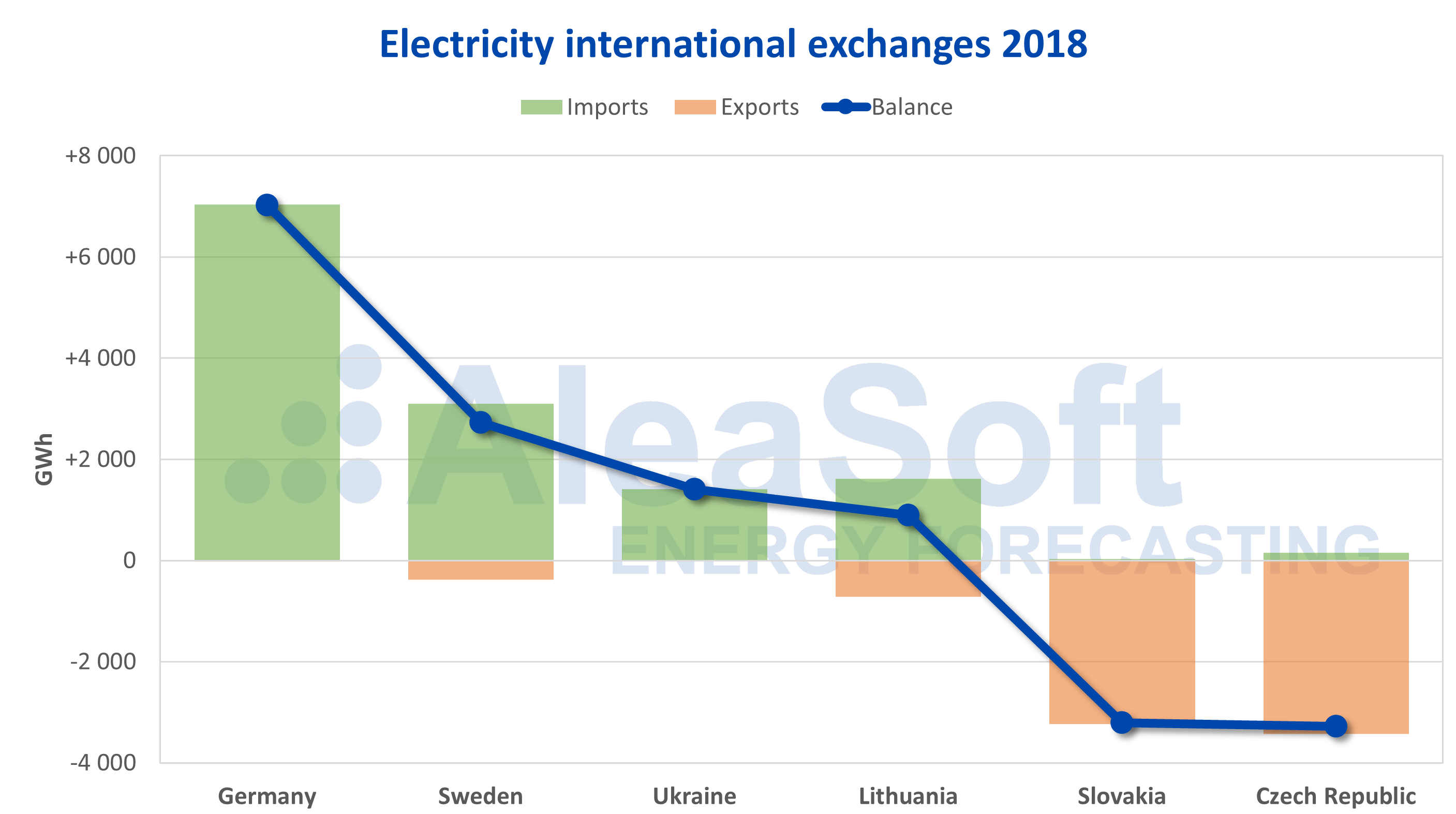 The future: less coal, more renewable energy and who knows if nuclear energy

It is clear that if Poland wants to meet the CO2 emissions reduction European targets, it must reduce its capacity to produce electricity with coal. Attending to the generation structure and the production mix, it is clear that this will be very complicated if security of supply doesn’t want to be jeopardized. The strategy envisaged by the government has several fronts: retrofitting existing thermal power plants, increasing renewable energy capacity, reducing coal production and starting to use nuclear energy.

Retrofitting current coal-fired power plants to meet the new environmental requirements of 450 kg of emitted CO2 for each MWh of energy generated is a very ambitious and tremendously expensive objective. So that the owners can face the investments required for the adaptation of the plants, the country has provided itself with a capacity market that, through successive capacity auctions, allows the reforms to be financed.

The other axis to meet the objective of reducing emissions is to increase the renewable capacity to reduce the contribution of coal in the production mix from the current 75% to 60% in 2030. Poland’s commitment is clearly for wind energy, mainly off-shore. However, in order to take advantage of the full potential of offshore wind energy, Poland faces the challenge of strengthening its internal electricity transmission network in order to integrate all the renewable energy that will enter the country, concentrated by the Baltic Sea coast in the northern part of its territory.

Poland is also aware that a robust transmission network and sufficient interconnection capacity with neighbouring countries are needed to reduce emissions and properly integrate non-dispatchable renewable energy production. Its priorities in this regard are, on the one hand, to strengthen the national electricity transmission network and, on the other, to improve existing interconnections with Germany and Lithuania to increase the interconnection capacity available for the markets.

The photovoltaic solar energy is also present in Poland’s future plans, both in domestic and industrial self-consumption setups on rooftops and in relatively large ground-based plants. The capacity of combined cycle gas turbines is also expected to slightly grow, as a backup technology for the increase in non-dispatchable renewable capacity and to compensate for the decrease in coal production.

The last pillar of the fight against CO2 emissions in Poland is the nuclear energy. Poland is the other major European country, along with Finland, which is planning to increase its nuclear capacity. Finland already has 2.8 GW of nuclear power and plans to double that capacity, but Poland does not currently have nuclear power plants in its territory, so it is planned to start using nuclear energy from scratch. The Polish government plans provide for the installation of at least 1 GW of nuclear power from 2033 and reach between 6 and 9 GW in 2043. However, according to several Polish experts with whom AleaSoft has been able to exchange opinions, the possibility of using nuclear energy in Poland is very unrealistic, so coal can be expected for many years yet.