The green hydrogen is the fuel of the future

AleaSoft, January 21, 2020. The hydrogen will be the fuel of the future and step by step it will replace all current fossil fuels. At AleaSoft an analysis of the impact of the hydrogen on the energy sector as a key factor in the ecological transition and a summary of the present and future use of this gas in various sectors of the economy were carried out.

The hydrogen is the most abundant element in the universe. It is used as an input in oil refining, the production of ammonia and methanol and the manufacture of steel. The current global demand for hydrogen is more than 70 million tons per year.

The hydrogen supply to industrial users is now an important business worldwide. The hydrogen demand, which multiplied by more than three since 1975, continues to increase, supplied almost entirely by fossil fuels, with 6% of global natural gas and 2% of global coal destined for the hydrogen production. 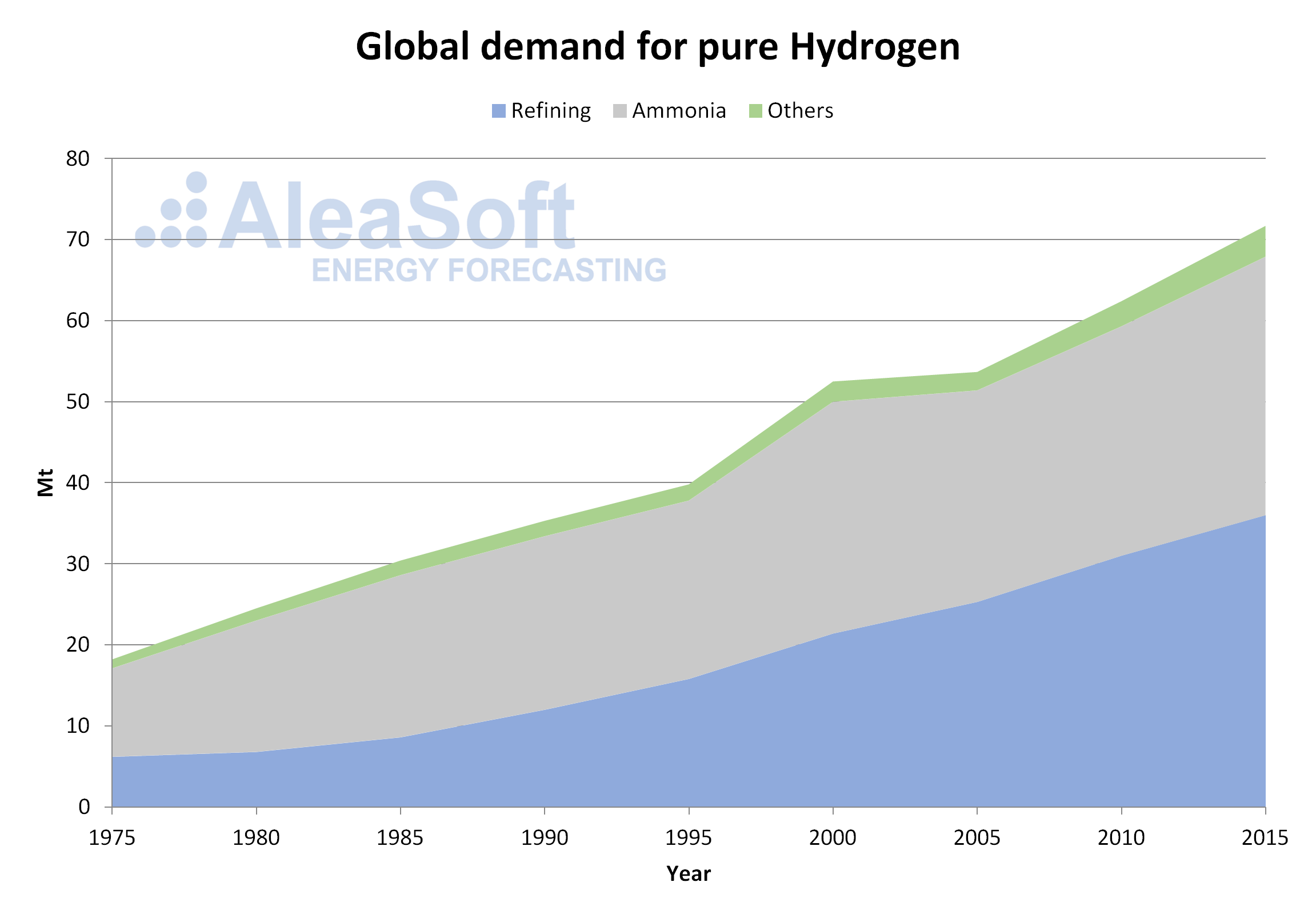 Source: Prepared by AleaSoft using data from the IEA.

Almost all of the current hydrogen is produced from hydrocarbons such as natural gas and coal. As a consequence, the hydrogen production is responsible for the emission of around 830 million tons of carbon dioxide per year, equivalent to the combined CO2 emissions of the United Kingdom and France.

However, there is a non‑polluting alternative, the so‑called green hydrogen. It is the hydrogen obtained through the electrolysis of water. Electricity is required for this process, so if the generation of a renewable source is used, hydrogen will be obtained without emissions in the process.

With the decrease in the costs of the renewable electricity, in particular solar photovoltaic and wind energy, the interest in green hydrogen is growing and several demonstration projects were carried out in recent years. However, the challenge is not small. Migrating all current hydrogen production would represent an electricity demand of 3600 TWh, more than the annual electricity generation of the entire European Union.

The construction of electrolysers in locations with good conditions of renewable resources could become a low cost supply option for the hydrogen, even after taking into account the transmission and distribution costs of the hydrogen transport from renewable energy plants locations, often remote, to the end users.

In order to obtain electricity from hydrogen, the inverse reaction than to obtain hydrogen is precisely carried out. In this case, it reacts with oxygen, obtaining electricity and water. The device responsible for carrying out this reaction is called fuel cell. One of the first practical applications of the fuel cells was in space vehicles, where in addition to the electricity supply, the resulting water can be used by the astronauts to drink, or to cool the ship’s systems.

In this way, the generation of electricity with fuel cells from hydrogen is 100% clean, and also as a byproduct drinking water is generated.

The hydrogen in the renewable energy management

It is in this sense that the hydrogen generation would represent the regulatory element of the balance in the electricity market price. In a scenario of much renewable energy production, whether wind energy, photovoltaic energy or other source, the minimum market price would be marked by the value from which it would be more profitable to use electricity to produce hydrogen. A price drop would imply the mass production of hydrogen, which would represent an increase in demand and finally a market balance would be reached.

The hydrogen as a form of energy storage

The energy storage is one of the main challenges that the sector will face in the coming years. The battery technologies evolved a lot, but do not solve the issue of long‑term storage yet. It is this scenario where the hydrogen could be very useful. Not only because of its ability to store energy for long periods of time, but also because it will be much easier to handle, since its weight will be lower, because the energy density of compressed hydrogen tanks is higher than those of the lithium‑ion batteries.

The hydrogen in the transport sector

The transport sector is probably the area where the hydrogen might be imposed more effectively. The hydrogen fuel cell electric cars (FCEV) would reduce local air pollution because, like battery electric cars (BEV), they have zero emissions of polluting gases.

There are already cars on the market that use this technology and have similar and even superior performance to several battery‑powered cars. The aspect in which the hydrogen car will have no competition is in refuelling. Replenishing a hydrogen car is much faster than recharging a BEV.

But the field of action of the hydrogen is not limited to cars. In larger vehicles such as buses or even in airplanes, the electric alternative with batteries is often discarded because of the weight involved in the batteries. The hydrogen represents a much lighter way of transporting the ability to power an electric motor. In June 2019, the European companies that make up the H2Bus Consortium joined with the objective of working together to deploy a fleet of 1000 electric fuel cell buses that will be incorporated into the fleets of several European transport managers. In addition, they will install, in each of the European cities where they operate, the hydrogen recharge infrastructure necessary to make them commercially competitive. 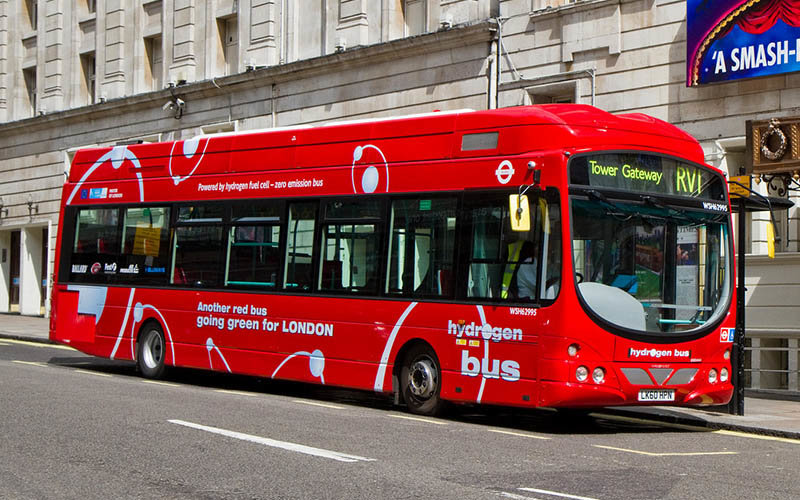 The hydrogen can also be converted into hydrogen‑based fuels, including synthetic methane, methanol, ammonia and synthetic liquid fuels, which have a range of potential transportation uses.

The green hydrogen is the fuel of the future. The ability to use a fuel with a zero CO2 footprint represents a revolution in the energy and transportation sector. The gasoline, the gas, the coal and all other fuels will be gradually displaced by hydrogen. From industrial to domestic use, the way forward is the use of hydrogen as the main fuel. In addition, as already mentioned, it will ultimately be the regulatory element of the balance of the electricity market.