Spain, the world renewable energy laboratory and in the top ten

AleaSoft, February 5, 2021. After some time, Spain returned to the world top ten in terms of renewable energy capacity. But looking at the numbers in detail, its position in the ranking improves if each particular renewable technology is analysed individually.

Spain is, without a doubt, one of the great world powers in terms of installed capacity of renewable energy sources. Taking into account that it is not a particularly extensive territory or with a large population, it has a special merit. But how is it compared MW by MW with the rest of the large economies that opted for the renewable energy? 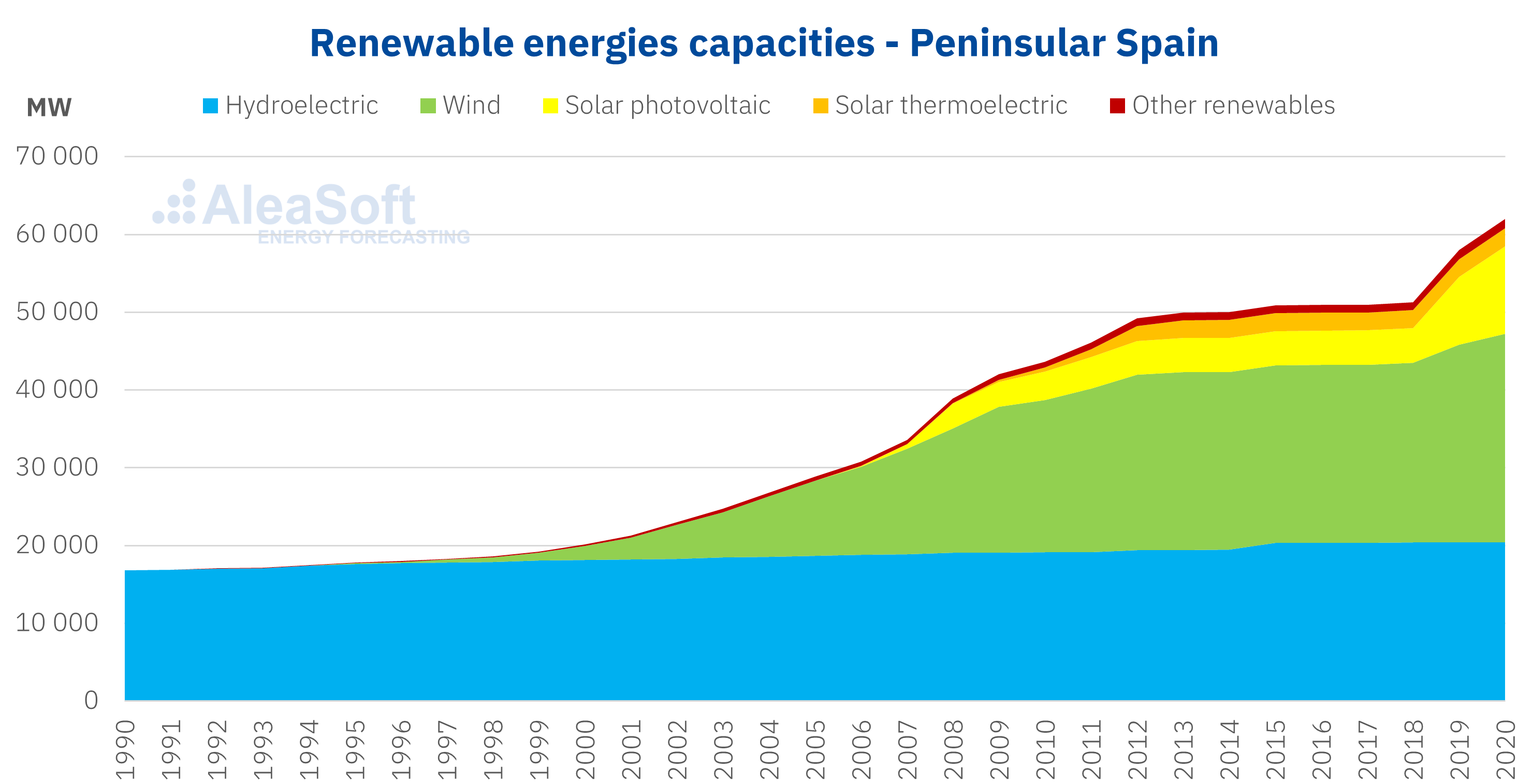 Looking at the national total, which includes the non‑peninsular territories, the installed wind energy capacity reaches 27 259 MW and the photovoltaic, 11 547 MW. The total national renewable energy capacity is 62 768 MW.

Comparison with the European countries

At the European Union level, with data from Eurostat for 2019, Spain is at least among the first four places in the entire European Union in terms of installed renewable energy  capacity, both of hydroelectric and of wind and solar.

In the world ranking of renewable energy capacity, Spain is in the top ten, right in the tenth position, according to data from IRENA for 2019. But looking at technology by technology, the situation is much better in some cases.

According to data from REN21 for 2019, Spain is the tenth world power in installed photovoltaic energy capacity. A ranking that will surely improve significantly in the coming years as progress is made to the NECP targets for 2030. The ranking of the wind energy capacity worldwide improves to the fifth place for Spain. And looking at the solar thermal energy capacity, Spain is in the place number one as a world power of this technology.

As was seen, Spain is already in a good position to achieve the ambitious objectives of the NECP. This good starting position and the good pace that the new renewable energy capacity installed in 2020 began to set is turning Spain into the world laboratory of the renewable energy and put it in the spotlight of the international investors.

The results of the renewable energy auction held at the end of January contributed to focus the global attention. The results of the auction are very good for the investors. Even though they are low prices, they are not ridiculously low prices, they are reasonably low prices. These are prices that make the investments in new renewable energy facilities profitable in the long term, taking into account that after being subject to the Renewable Energy Economic Regime (REER), the plants will continue to operate.

In addition, with the necessary investments, Spain has the opportunity to become the main green hydrogen production and export hub in the south of the continent thanks to the renewable resource, mainly solar, at its disposal.

The cycle of webinars “Prospects for the energy markets in Europe from 2021” is being held at AleaSoft with the participation of speakers from the most important companies in the energy sector of the continent. The third part of this series is scheduled for February 18, and this time it will have the collaboration of ENGIE, to analyse the prospects for the energy markets and the financing of the renewable energy projects from this 2021. Later, the fourth part of the webinars series is scheduled for March 18 and it will feature the collaboration of speakers from EY (Ernst & Young).

After the first workshop organised by AleaSoft on February 4, where the Alea Energy Database (AleaApp) functionalities for the compilation, visualisation and analysis of data related to the energy markets were shown, the next workshop will be held on February 11 and it will show to the agents operating in the electricity spot and futures markets how to make the most of the mid‑term market prices forecasting and stochasticity.

At AleaSoft, a wide variety of reports for the energy sector that cover the main markets in Europe is also available. In addition, new complementary services associated with the long‑term prices curves reports are also offered to advise on the use of them.