AleaSoft, February 8, 2021. In the first week of February, the European electricity markets prices fell and in some of them negative or close to zero values were reached on Sunday 7. The Nord Pool market was the only one where the prices rose compared to the previous week. On the 1st, the price of this market was the highest since 2016 and the second highest in Europe, something unusual. On the 5th, the CO2 futures exceeded €38/t, a new historical record, and the Brent futures exceeded $59/bbl, which did not happen since January 2020.

For the week ending Sunday, February 14, the AleaSoft‘s solar energy production forecasting indicates that in the markets of Spain and Italy, the production with this technology will decrease compared to the previous week. By contrast, in the German market, the production is expected to increase. 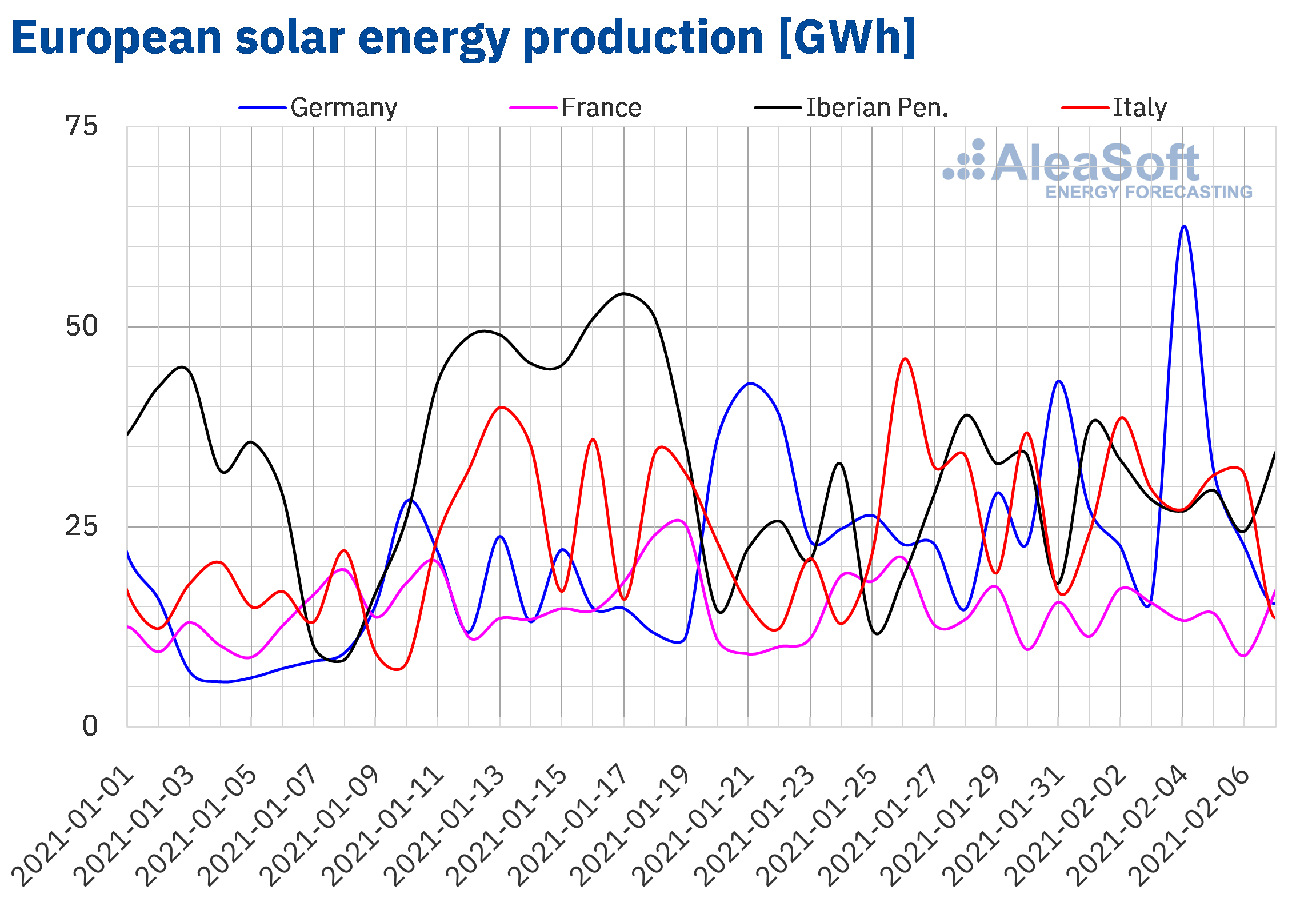 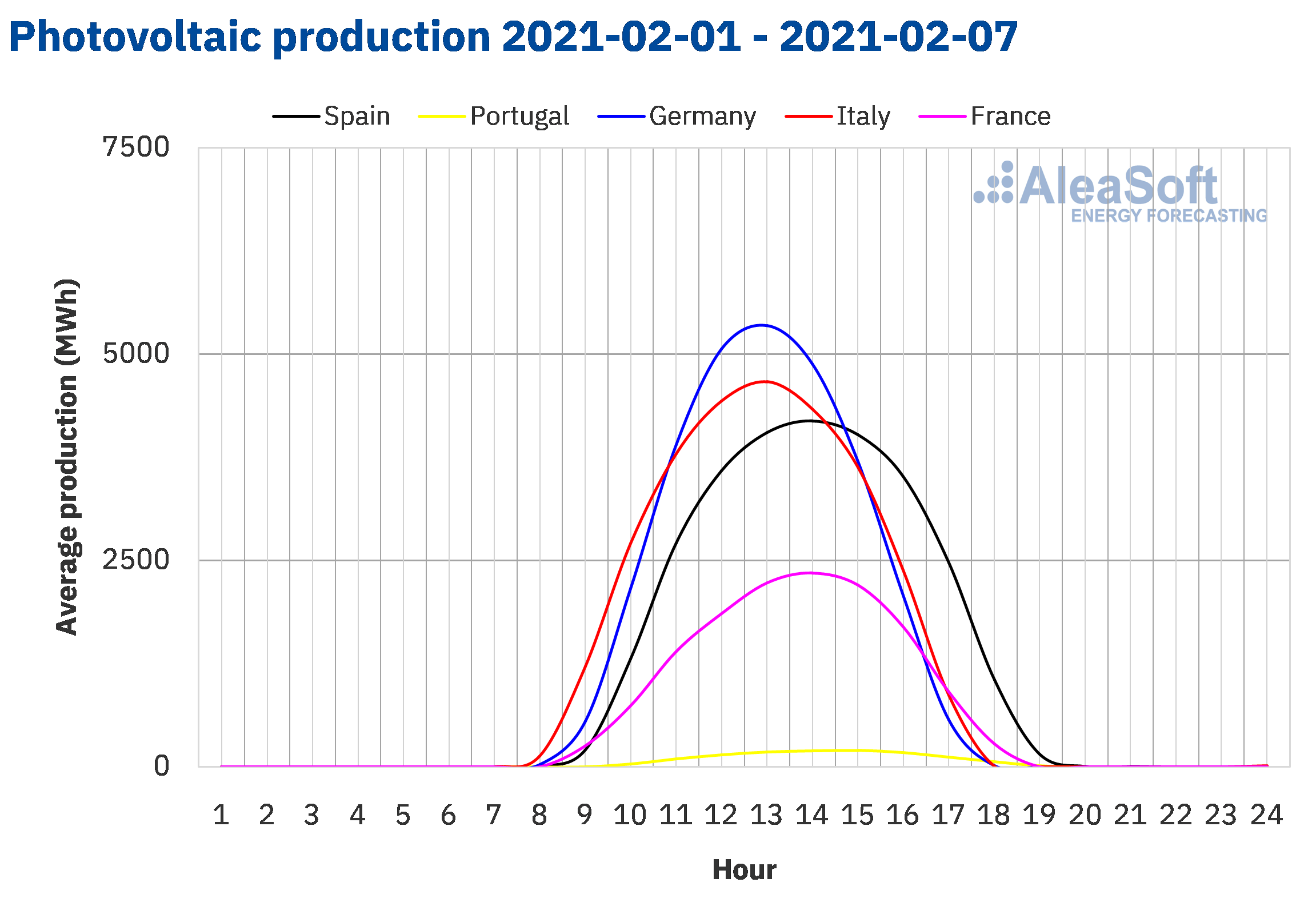 During the first week of February, the wind energy production increased by 61% in the German market compared to the previous week. On the contrary, in the rest of the markets analysed at AleaSoft, the production with this technology decreased compared to the week that ended on January 31. In the Italian market, the production fell by 43%, in the French by 23% and in the Iberian Peninsula by 9.9%.

For the second week of February, the AleaSoft‘s wind energy production forecasting indicates that in the German market it will be lower than that registered the previous week. On the contrary, in the Iberian Peninsula and in the Italian market an increase in production is expected, while little variation is expected in the French market. 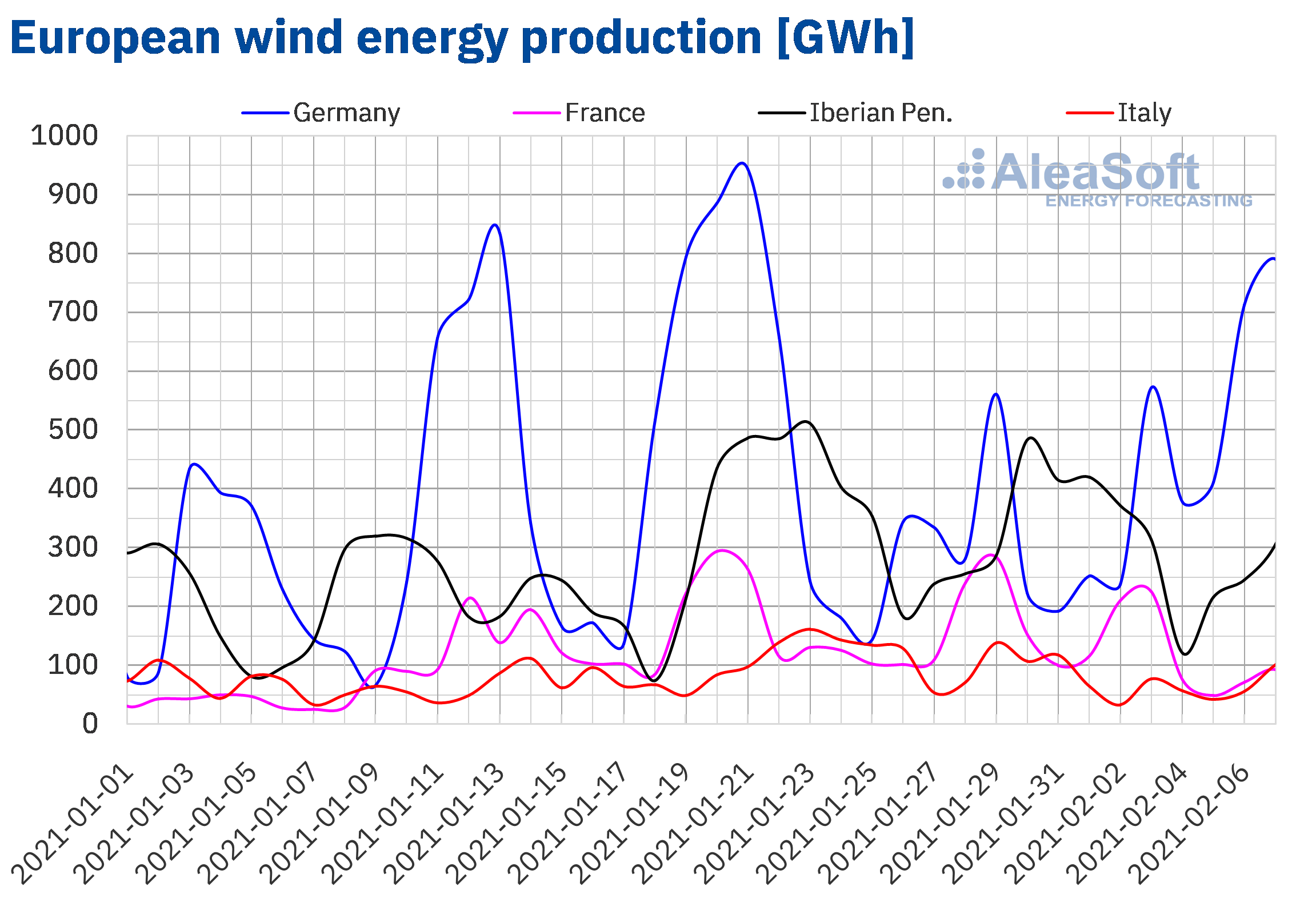 In the first week of February, the electricity demand fell in all European markets compared to the previous week. The exception was the Portuguese market, where an increase of less than 1.0% was registered. The average temperatures rose to 2.2 °C, in the case of Germany, and were the most influential factor in these declines. It is worth highlighting the drop of more than 8.0% in the French market, which registered the most notable drop compared to the rest of the markets.

The AleaSoft‘s electricity demand forecasting indicates that the demand will recover in all European markets during the week of February 8. 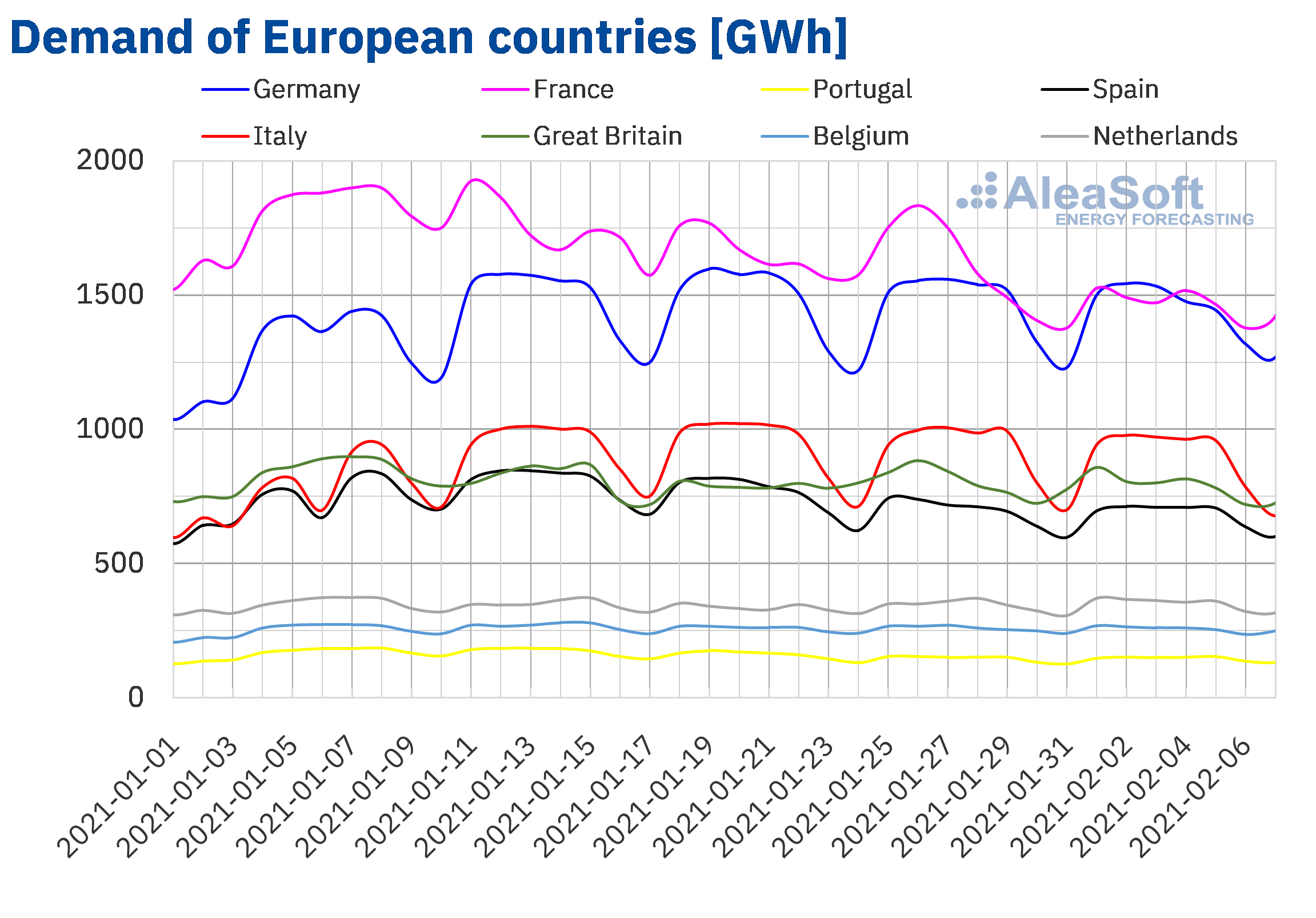 The week of February 1, the prices of almost all the European electricity markets analysed at AleaSoft decreased compared to those of the previous week. The exception was the Nord Pool market of the Nordic countries with a slight increase of 0.3%. On the other hand, the largest drop in prices, of 23%, was that of the MIBEL market of Spain and Portugal. On the contrary, the lowest price decrease was that of the IPEX market of Italy, of 1.6%, followed by that of the N2EX market of the United Kingdom, of 5.4%. In the rest of the markets, the price drops were between 8.2% of the EPEX SPOT market of the Netherlands and 18% of the EPEX SPOT market of France.

In the first week of February, the highest weekly average prices were those of the United Kingdom and Italy, of €67.39/MWh and €55.35/MWh, respectively. While the MIBEL market had the lowest average, of €32.33/MWh. In the rest of the markets, the prices were between €45.02/MWh of the French market and €52.69/MWh of the Nord Pool market. 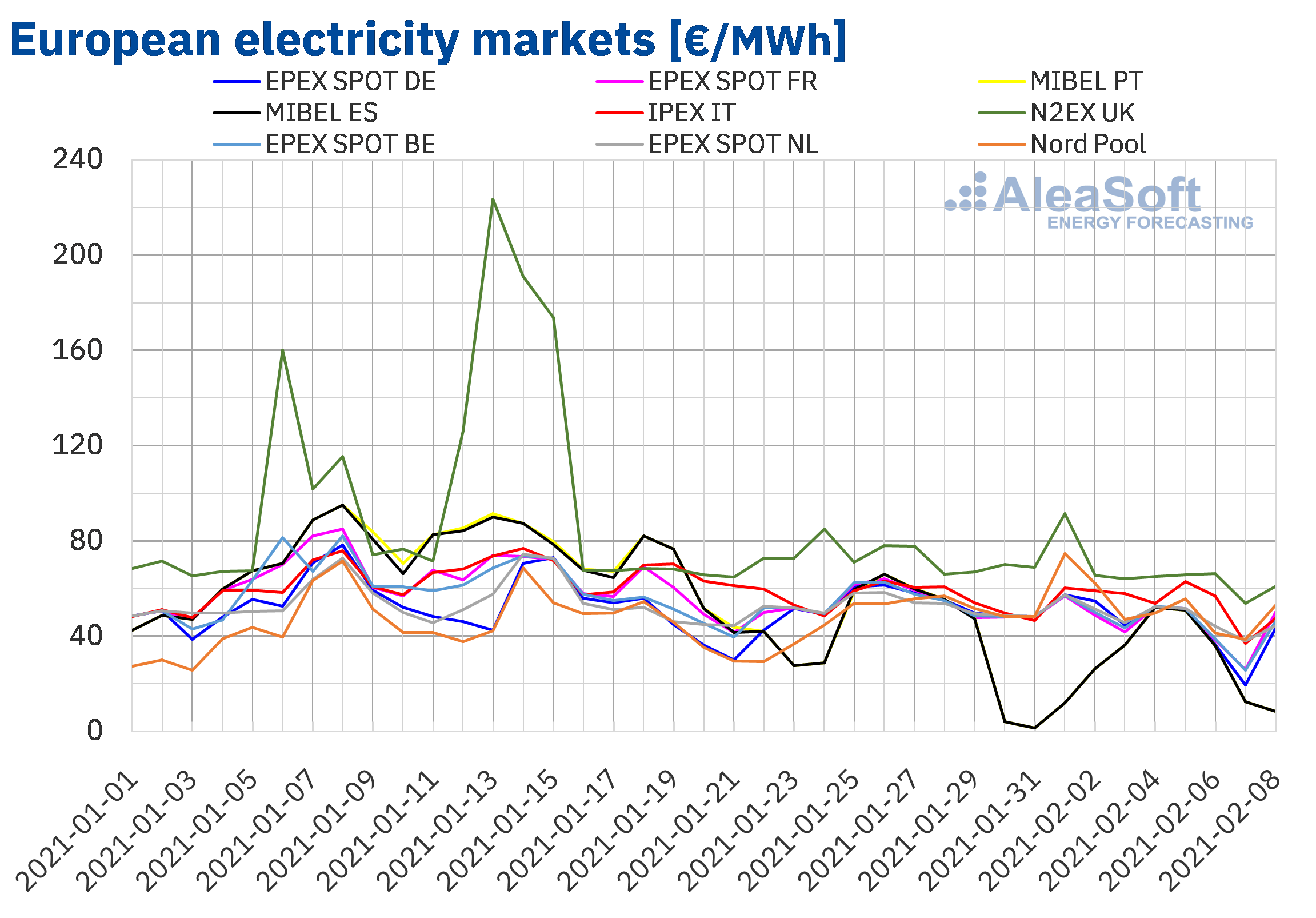 The AleaSoft‘s price forecasting indicates that for the week of February 8, the prices will recover in most markets. The exceptions will be the IPEX and MIBEL markets, where the prices are expected to continue to decline, influenced by the increase in wind energy production. 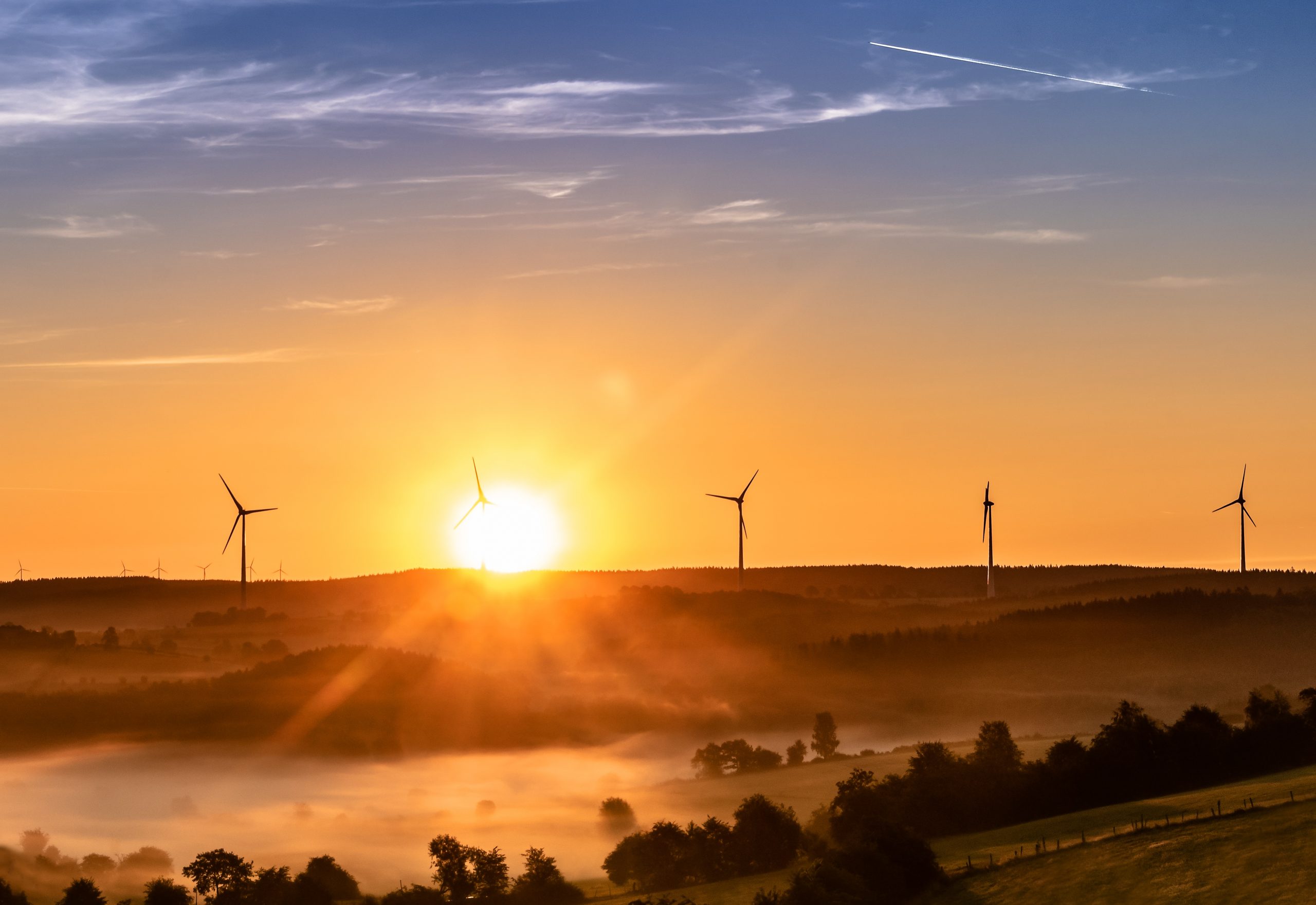 During the first week of February, the electricity futures prices in the European markets analysed at AleaSoft rose in all markets except in the Nordic countries region. Both the ICE market and the NASDAQ market of the Nordic countries opposed the behaviour of the rest of the markets and in the difference between the settlement of the last week of January and that of the first week of February, a drop of the 5.6% and 5.5% respectively for the product of the next quarter of 2021 was observed in this markets. At the other extreme is the EEX market of Germany, where the price of this same product increased by 6.4%. In the rest of the countries, the increases were between 1.7% of the EEX market of Spain and 5.0% of the EEX market of France.

The Brent oil futures prices for the month of April 2021 in the ICE market, the first week of February, followed an upward trend. As a result, on Friday, February 5, a settlement price of $59.34/bbl was reached, which was 7.8% higher than that of the same day of the previous week and the highest since January 2020.

This upward trend in prices was favoured by the OPEC+ production cuts and by the expectations that the US government aids will allow its economy to improve. The increase in crude consumption in China also contributed to the price increases. However, the coronavirus pandemic continues to affect the demand levels globally.

As for the TTF gas futures in the ICE market for the month of March 2021, the first week of February they remained around €18/MWh. The minimum settlement price of the week, €17.85/MWh, was reached on Wednesday, February 3. This price was 7.2% lower than that of the previous Wednesday and the lowest since the first week of January. On the other hand, on Friday the highest settlement price of the week, of €18.38/MWh, was registered.

Regarding the settlement prices of the CO2 emission rights futures in the EEX market for the reference contract of December 2021, during the first week of February, despite some slight decrease, most days the prices increased. As a consequence, on Friday, February 5, the settlement price was €38.20/t, 16% higher than that of the previous Friday and the highest registered so far. The forecasts of lower temperatures in Europe favoured this increase in prices. 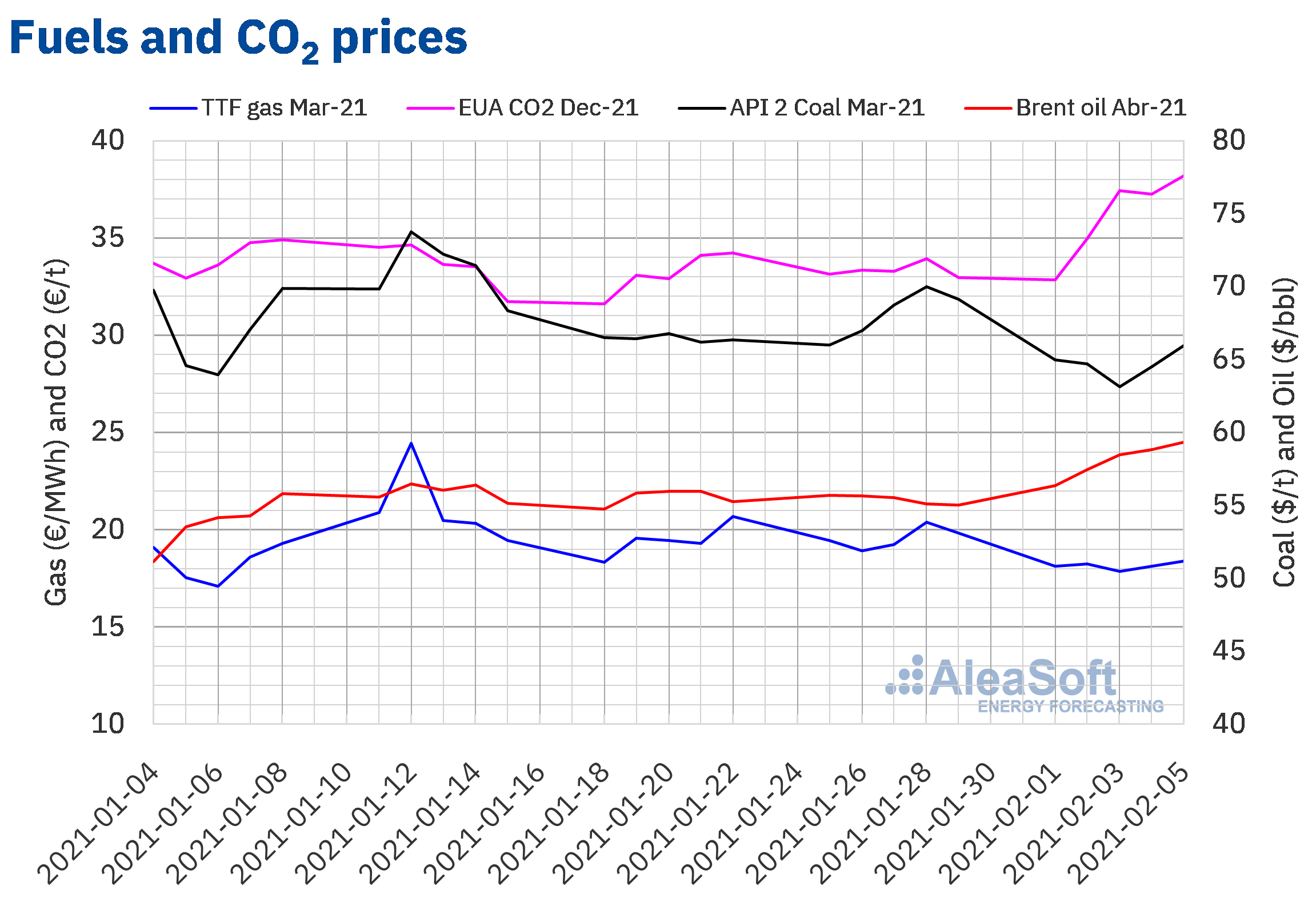 At AleaSoft, the next webinar of the series on the European energy markets and their prospects from 2021 is being organised for the next February 18, this time with the participation of speakers from Engie. The preparations for the following webinar also began, which will be held on March 18, with speakers from EY (Ernst & Young) on this occasion.

In addition to the webinars, workshops on various topics that may be of interest to the sector are being held at AleaSoft. On February 4, the first one was held, focused on the AleaApp Platform, a tool that compiles the data from the energy markets and facilitates their visualisation and analysis. In the next workshop, which will be held on February 11, the mid‑term market prices forecasting with stochasticity and how the agents that operate in the spot and futures markets can use them and make the most of them will be explained.

Reports for the energy sector, among which are the long‑term European electricity markets price curves, are also made at AleaSoft. These reports are associated with complementary services to advise on their use.