SPANISH AND PORTUGUESE ELECTRICITY MARKETS WITH THE HIGHEST PRICES IN EUROPE

AleaSoft, June 28th, 2018. The prices of Spain and Portugal markets were the most expensive ones in Europe along with the British market. The connection to the grid of the Trillo nuclear power plant this week, together with the stabilization of the electricity demand, should push prices slightly downward, according to AleaSoft.

The daily price of OMIE markets in Spain and Portugal has been above 61 €/MWh since the beginning of this week of June 25th. With these prices, both markets have positioned themselves as the most expensive ones, along with the traditionally more expensive British N2EX, when compared with the rest of the main European markets, such as EPEX SPOT (Germany, Belgium, France, the Netherlands and Switzerland) and IPEX (PUN and NORD).

The Trillo nuclear power plant reconnected to the electricity grid again this Wednesday, June 27th, after a 39-day outage, once the refueling and revision tasks were finished. According to AleaSoft, this fact will push the price of the electricity market slightly downwards. Right now, only the Vandellós II nuclear power plant is unavailable, which is not expected to be reconnected to the network at least until mid-July. 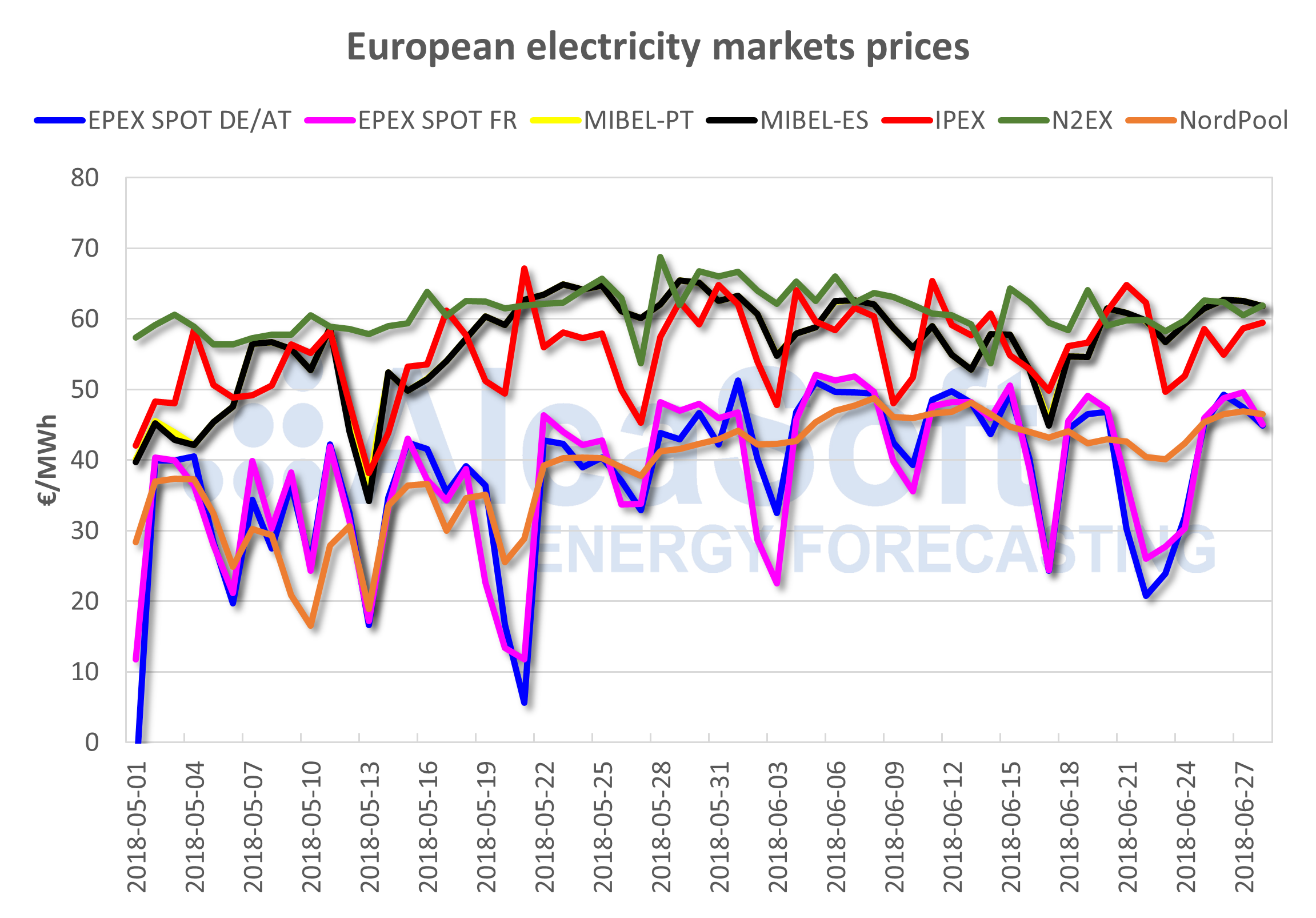 Regarding electricity demand in mainland Spain, last week of June 18th, there was a significant increase, 6.5% more than the previous week, due to the increase of the temperature, which was on average 1.4°C above the typical temperature at this time of year. The forecasts foresee that the temperature will remain high but will not increase further the remaining of this week of June 25th and the following week. AleaSoft estimates that the increase in demand for this week with respect to the previous week will be 0.6%.

The reservoirs of available energy in hydroelectric dams increased very slightly (0.1%) according to the records of Tuesday, June 26th compared to seven days before, and continued to grow uninterruptedly during the last 19 weeks, since February 19th.

Throughout this week of June 25th, the peninsular wind production remained below historical levels for this time of year. Looking ahead to the end of the week, AleaSoft considers that there are possibilities that it can be recovered.

The price of EUA CO2 emission rights has stabilized after the bull run since the beginning of the year. The maximum reached by the reference future for December 2018 was 16.31 €/t on May 28th, last week it fell to 14.24 €/t on Tuesday, June 19th, and on Wednesday, June 27th it closed at 15.26 €/t. Brent oil, gas and coal prices have also stabilized since the beginning of this month of June, and just registered very slight oscillations.